Yayy it's my birthday!! I turned the big 18, and I decided to celebrate at Dinesty! I have an irrational fear of eating bad food (especially on my birthday) haha so I decided to trust my fellow Urbanspooners for a restaurant recommendation. With 952 votes and a 85% rating, Dinesty seemed very promising. They're famous for their xiao long bao, which have actually won awards! The food at Dinesty is supposedly on par with that of the famous restaurant chain Den Tai Fung! So after extensively reviewing the blog reviews on Urbanspoon, I settled on a few dishes that everyone seemed to really like.

4.5/5 stars
A lot of bloggers mentioned that this dish was delish and I wasn't disappointed! The Hoisin Sauce lent a savoury concoction of sweet and salty to the meat. The pork itself was very chewy, and was mixed in with cold cucumbers. I would definitely order this again! This dish also went really well with the fried rice that we ordered!


4/5 stars
The pancakes themselves really impressed me as well! They only give you six pieces, which isn't nearly enough for all the pork. However, the texture of the pancake was very springy and soft, and went very well with the meat.

4.5/5 stars
The wine chicken was delicious and very well executed. I love how the chicken is boneless! The wine flavour was subtle but went very well with the cold chicken. The meat was very soft and moist. Overall, a very nice refreshing compliment to our meal.

4/5 stars
Even though this was a side dish, there was a substantial amount of tendon. The beef tendon was very chewy, soft, and had a very silky texture.The sauce was very flavourful and had a subtle spiciness to it, which I really enjoyed.

4/5 stars
These definitely lived up to the rave reviews! The baos were on the small side, but I didn't really mind, since they were so flavourful! The broth to pork ratio was perfect! The pork itself was very chewy and soft.

4.5/5 stars
The rice was very fluffy in texture and wasn't very oily. There were huge chunks of shrimp, which were actually very flavourful! The rice was very fragrant from the eggs, green onion, and shrimp. Overall, one of my favourites.

4/5 stars
The dough of the Sesame Buns were very springy and soft. The sesame aroma was very potent and the paste itself had a subtle sweetness to it. We all agreed that these were amazing sesame buns and a very sastifying way to end our meal! 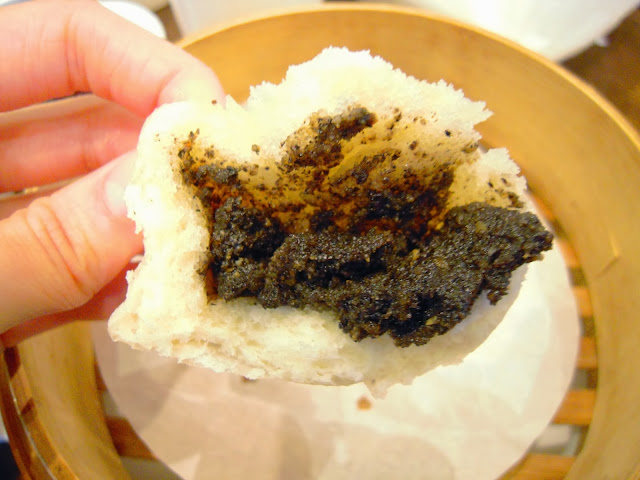 Cons:
-Can get busy on weekends

You know that feeling of satiety after ending a delicious meal? Dinesty left us all very satisfied and content! For $50, we thought it was a bargain! Even my Dad was impressed with Dinesty (and he's very hard to impress)! He's usually impartial to everything he eats, however he commented that all the dishes were very immaculate and very well executed!

Overall Rating: 4/5 stars
Will I be back? Yes! Hopefully next week, hehe!