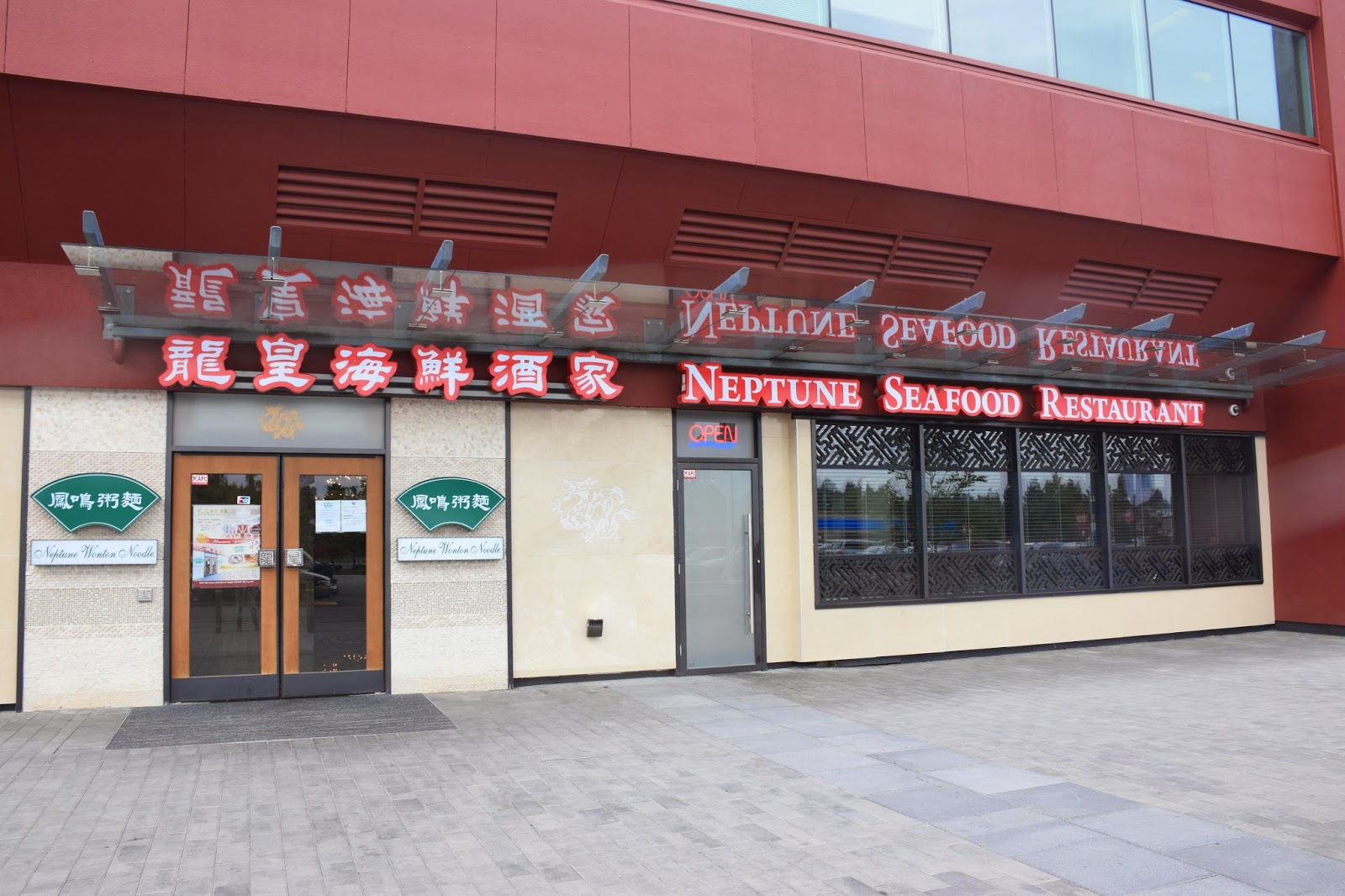 Ohh, a sparkly new dim sum restaurant! Neptune Seafood Restuarant has another location in Richmond, but I never knew this place existed in Surrey till a few days ago! This location is situated inside of Surrey Central Mall, beside Target and strategically placed in close proximity to T&T haha. The restaurant is accessible from both the outside and inside of the mall.
Unlike the dim sum restaurants in Richmond which are showing signs of age, this one was bright, spacious, shiny (chandeliers!) and quite classy looking. Also, in Richmond most (if not all) of the servers speak Cantonese, but at this one in Surrey, most of the servers speak Mandarin. 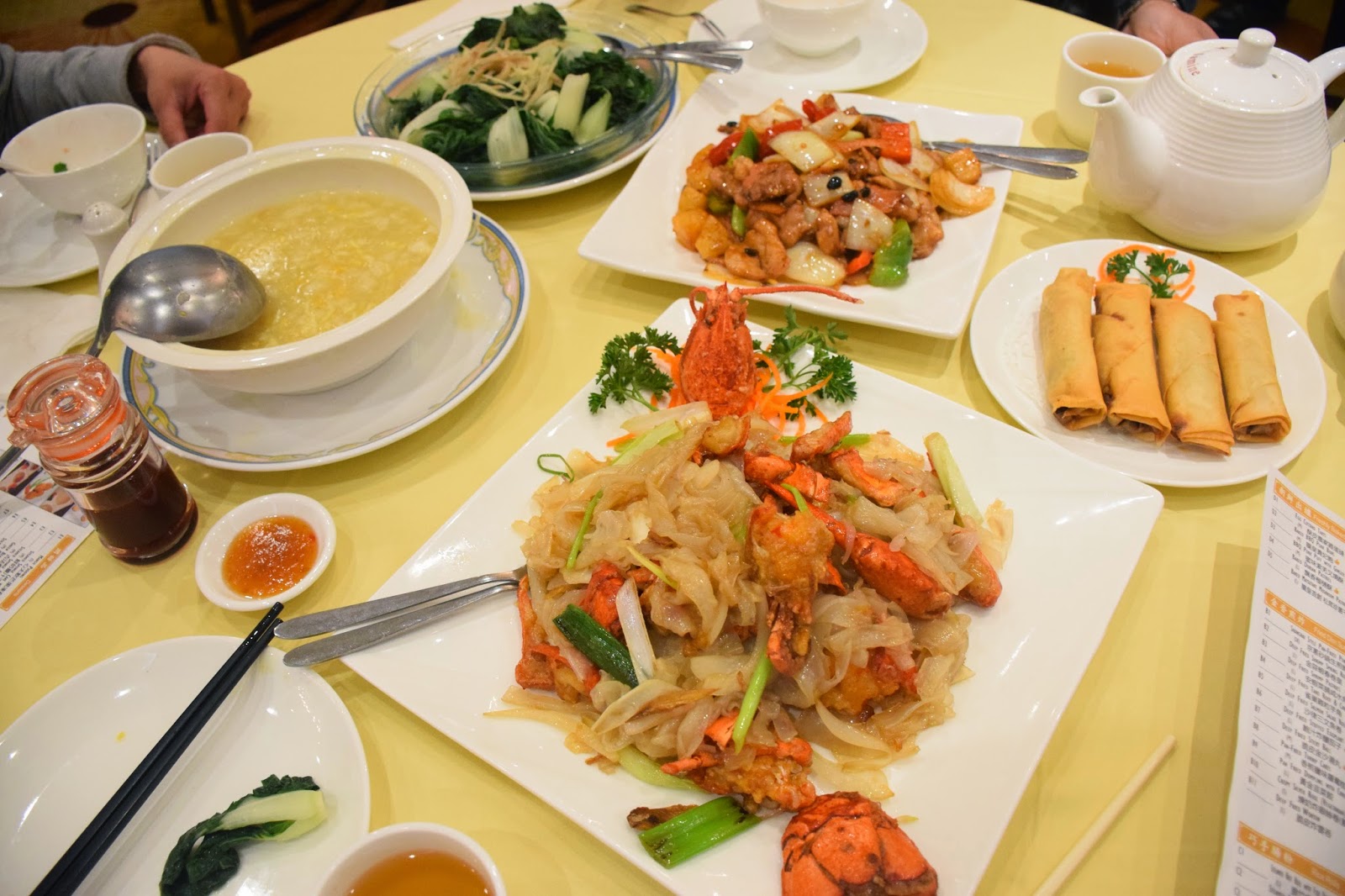 Since we were past the prime time of ordering dim sum (9-11 am you get 20% off) we opted for one of their lobster lunch sets for 4 instead! It was well priced at about $48 before taxes. It came with a main lobster dish, fish maw congee, a huge plate of bak choy, spring rolls, a stir fried chicken dish, and mango pudding as dessert.
4/5 stars
To start off, we had the fish maw with corn soup! The server scoops the soup for you into everyone's individual bowls. Fish Maw is actually fish stomach! Don't worry, it tastes a lot better than it sounds! The soup had a lot of fish maw in it, as well as bits of eggs, and corn. The soup was rather thick. While the fish maw added an interesting chewy texture to the soup, it didn't add anything flavour wise. The fish maw itself was plain and relied on the other flavours of the soup. The soup tasted primarily like corn soup, with notes of egg.
4/5 stars
The rice noodles, which had been stir fried, were cooked al dente, and were of the thicker, translucent variety.The noodles were well flavoured, but didn't distract from the flavours of the lobster. The pieces of lobster were never ending! The lobster was light and airy, and had been properly seasoned.  I actually ended up comsuming almost half of the entire plate by myself harharhar.
2/5 stars
It was pretty evident that they only used this dish as a filler in the set haha. This dish was basically just steamed bak choy, garnished with some bamboo shoots. I think they wanted to make up for its boringness in sheer volume, because this plate was huge (think No.9 huge) haha!
3/5 stars
This tasted a little on the lines of ginger beef! It was actually quite tasty albeit rather predictable and generic tasting. But hey, sometimes familiar things just hit home, so even though this wasn't really that exciting, I still enjoyed it! The chicken was reasonably tender, and had been saturated with intense notes of ginger and onion.

3/5 stars
The spring rolls were filled with cabbage and black fungus, which actually tasted pretty good! The mushroom flavour was very potent, and gave the rolls a deep woody flavour. The exterior shell was reasonably crispy, but the shells lacked the fragrant aroma that usually accompanies a well made spring roll. One thing I appreciated was that the spring rolls had no detectable traces of oil, which was pretty awesome! haha

4/5 stars
I'm not one to order mango pudding at seafood restaurants because I usually find them to be subpar, but these tasted great! The mango pudding didn't taste artificial, in fact, it tasted just like fresh mango! The jello was firm without being too mushy, and was just the right melt-in-your-mouth consistency. I actually ate this entire plate by myself haha.

While the dishes weren't amazing, they were all rather tasty! The service was well above average for a dim sum restaurant! The servers came back to check on us multiple times, refill our tea, and take away any dirty plates. Since there aren't many dim sum options in Surrey, I'll definitely come back to eat at Neptune whenever I'm craving dim sum in the area!