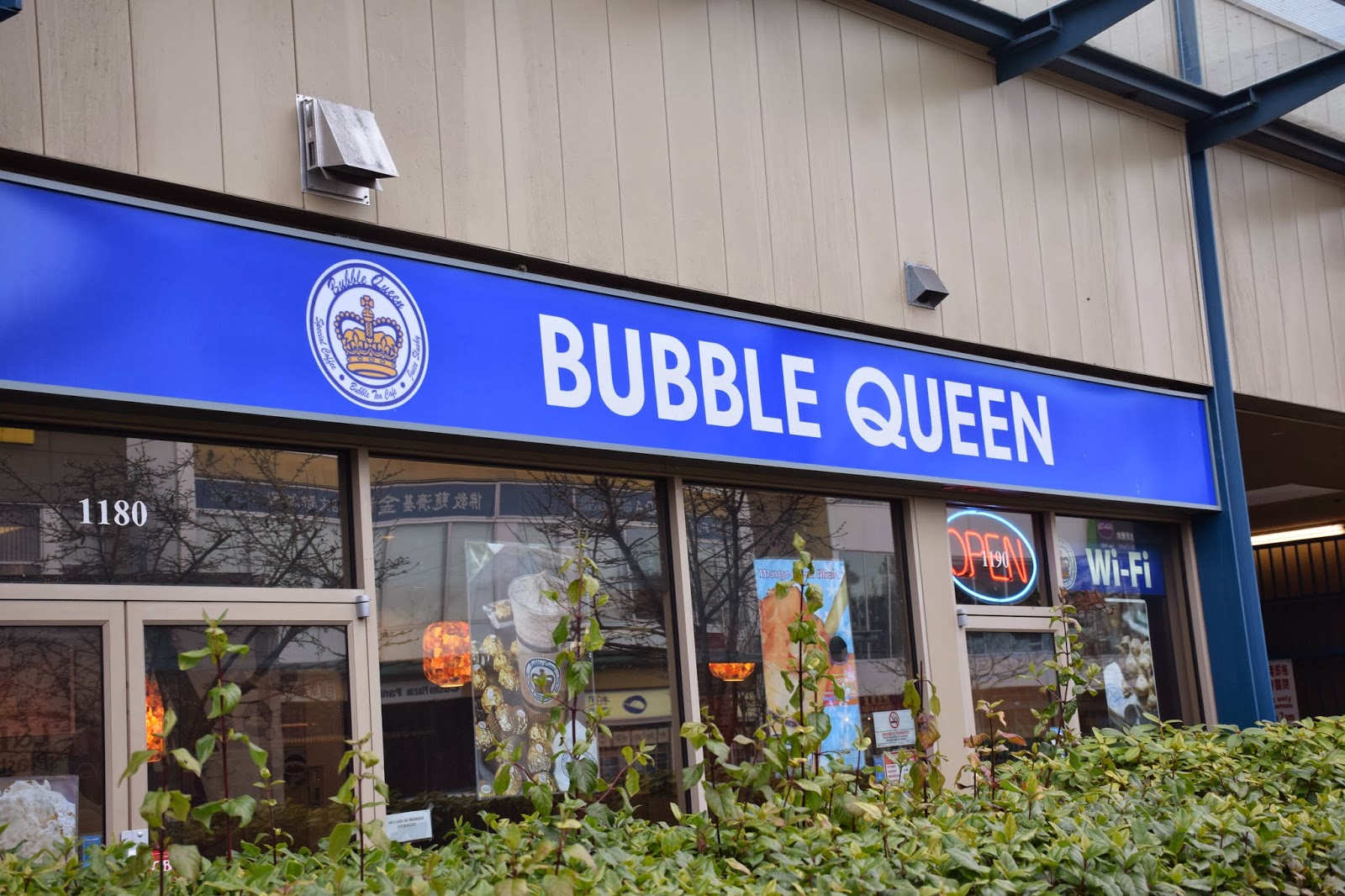 This post has been a long time in the making. I spent the past few months trying out different items at Bubble Queen to review for you all! I really wanted to get this post up in time for summer, so here it is! The ULTIMATE review of Bubble Queen! In this post I'll be covering 18 drinks, and 5 types of bubble waffles! Trying out all these items was super fun! I think I deserve a VIP card or something (jk). I go there so often I'm pretty positive the staff recognize me haha! So sit back, relax, and let the par-tay being! Whoo! Get ready to scroll your heart out!

Bubble Queen is famous for their innovative candy bar slushes, where they grind actual chocolate bars into a slush! They're also very well known for their Mango Cube slush, a mango smoothie topped with juicy mango chunks!

Btw, if you want to see the drinks in all their calorific glory, click on the picture to enlarge it! :D
4/5 stars
First up, their Malteser's slush! This was probably my favourite out of all the candy bar slushes I tried. True to it's name, it's malty, frothy, and whipped to perfection. It doesn't get better than this haha!
All of the slush/smoothie based drinks are super filling! If you're planning on having dinner after this, I recommend you share with a friend haha because on more than one occasion I was so full after drinking these I skipped dinner haha. 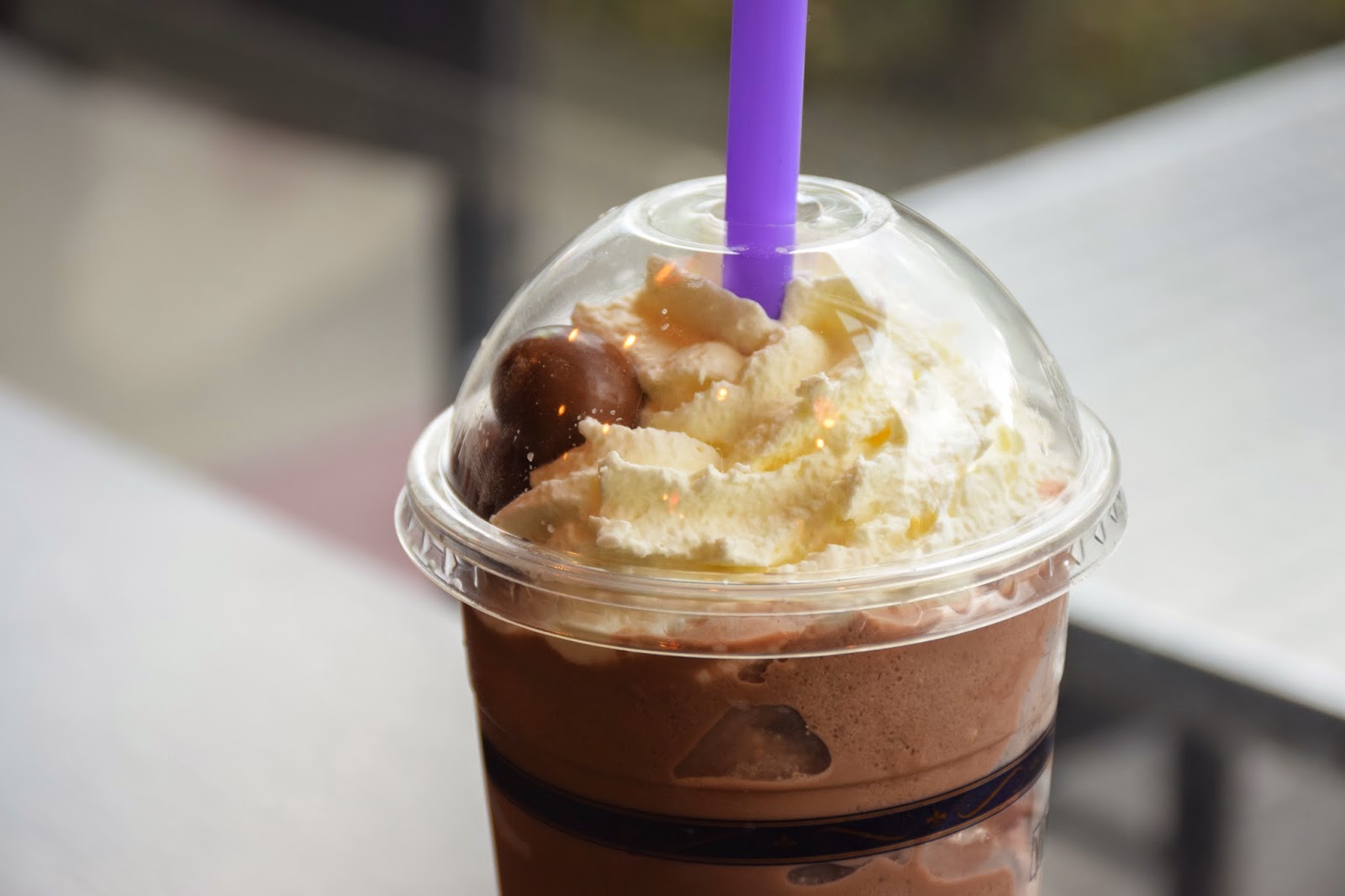 All of Bubble Queen's candy bar slushes are adorned with the actual chocolates on top! I like to leave the chocolate for after I'm finished the drink. In another review someone said that it was like the "dessert after the dessert!" I can't agree more haha :D
4/5 stars
This was delicious! The slush had chunks of almond roca, which added a gritty texture to the creamy smoothie! The almond also added a subtle saltiness to the drink, which made it even more yummy! The drink only had one tiny square of the candy, because almond roca is one of the more expensive candies haha.
4/5 stars
Check out that watermelon in the back haha! One day I went there was about 8 watermelons on the table, basking in the sun haha.
Being the klutz that I am, I knocked over my drink when I was getting ready to snap of photo of it haha, so that's why you can't see the top of it. The toblerone flavour was very strong, but wasn't overwhelmingly sweet.
4/5 stars
They use matcha powder, which resulted in the matcha flavour being very potent. Matcha is definitely of acquired taste, it's more bitter than green tea, and is rather grassy in flavour. I love matcha, so I really enjoyed this! I would definitely order this again!

2/5 stars
I'm pretty sure they use pre packaged sesame drink packets, because that's what this tasted like haha. I'm not sure if it was due to the lack of sugar, but this tasted a bit salty. The sesame was very potent, and gritty in texture.

1.5/5 stars
Strawberry pocky, in drink form! This tasted pretty much like generic Japanese artificial strawberry flavouring haha. You can also get this with fresh strawberry, in slush form! In my opinion, it was overly sweet. Powders are usually already pre sweetened, so if you ask for half sweet, they don't add less sugar, they just water it down.

Their tapioca pearls are the perfect texture, without being too hard or overly mushy. If you're really craving pearls don't go right when they open because most likely the pearls won't be cooked yet. Also, the pearls take a while to cool off, so it's best to go after 3 pm. Once the pearls were still steaming hot when they added it to the cup, and it made my drink lukewarm haha.
4/5 stars
This is definitely my favourite milk tea out of the bunch, after the matcha milk tea! The milk tea is their Original Milk Tea, which has hints of coffee. They top it off with whipped cream and shavings, making it extra decadent!


3/5 stars
The mocha flavour was really potent, and actually tasted really good mixed with the tea! However, if I'm craving something mocha flavour, I would rather go to Starbucks haha.

4/5 stars
I'm not a huge fan of powdered drinks, but this was an exception. This tasted delicious! Although it was on the sweeter side, I really enjoyed the flavour of the taro. The milk tea was also thicker and creamier than usual, which I suspect may be due to the powder used.
4.5/5 stars

I think they use real taro, because flavour and texture wise, it tasted like real taro! The exterior of the waffles are really crispy, with the interior being soft and gooey. The taro was subtly sweet, and didn't overwhelm the flavours of the waffle batter. If you love taro and you're not a fan of really sweet desserts, you'll definitely like this! :D 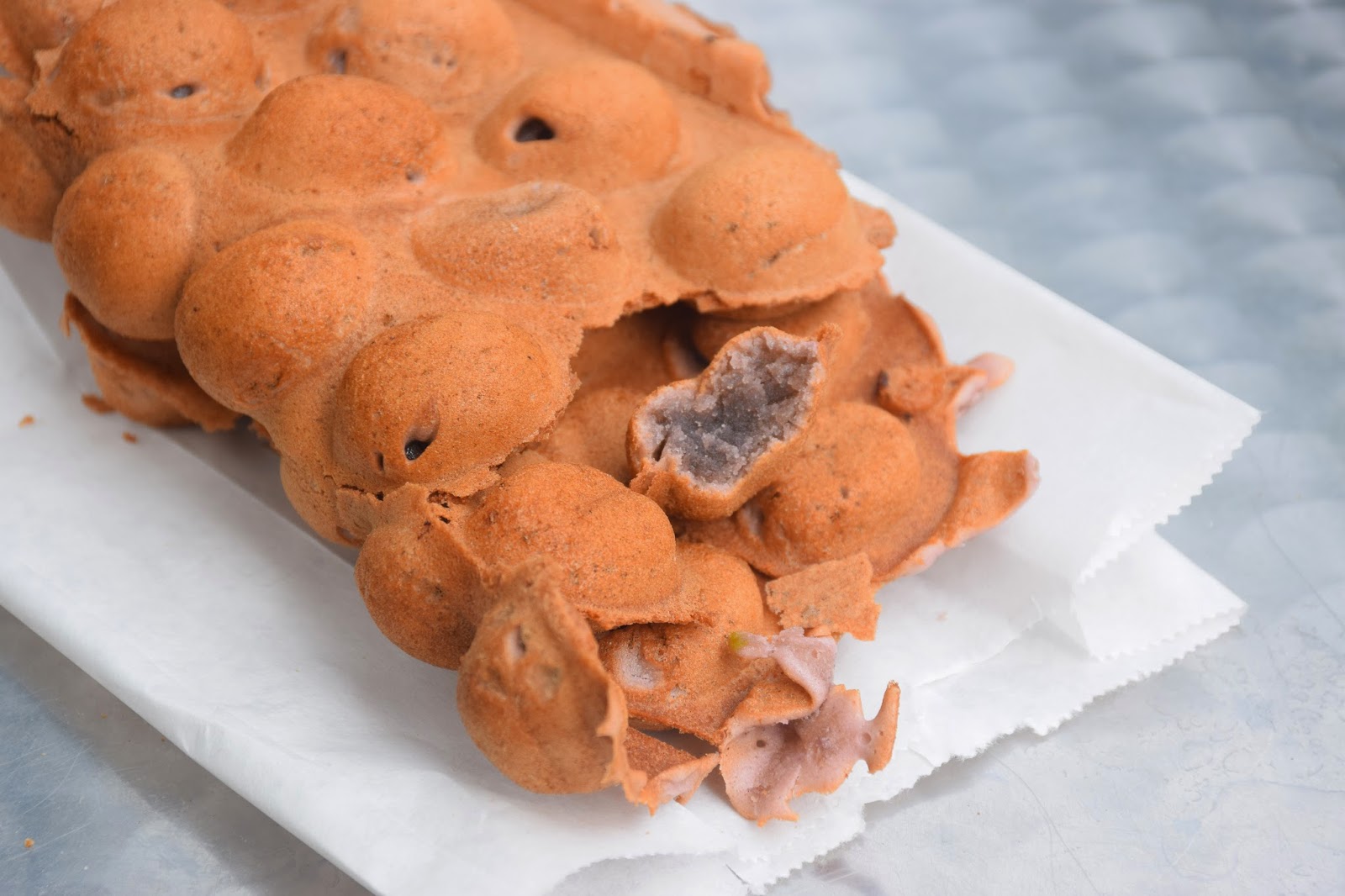 4/5 stars
Just like the strawberry bubble tea, this tasted like pocky, but way better! The waffle itself isn't that sweet and tastes strongly of strawberry. The interior is filled with bits of super sweet white chocolate chips! I was surprised at how much I liked this! I ordered it 3 more times after I first tried it :D 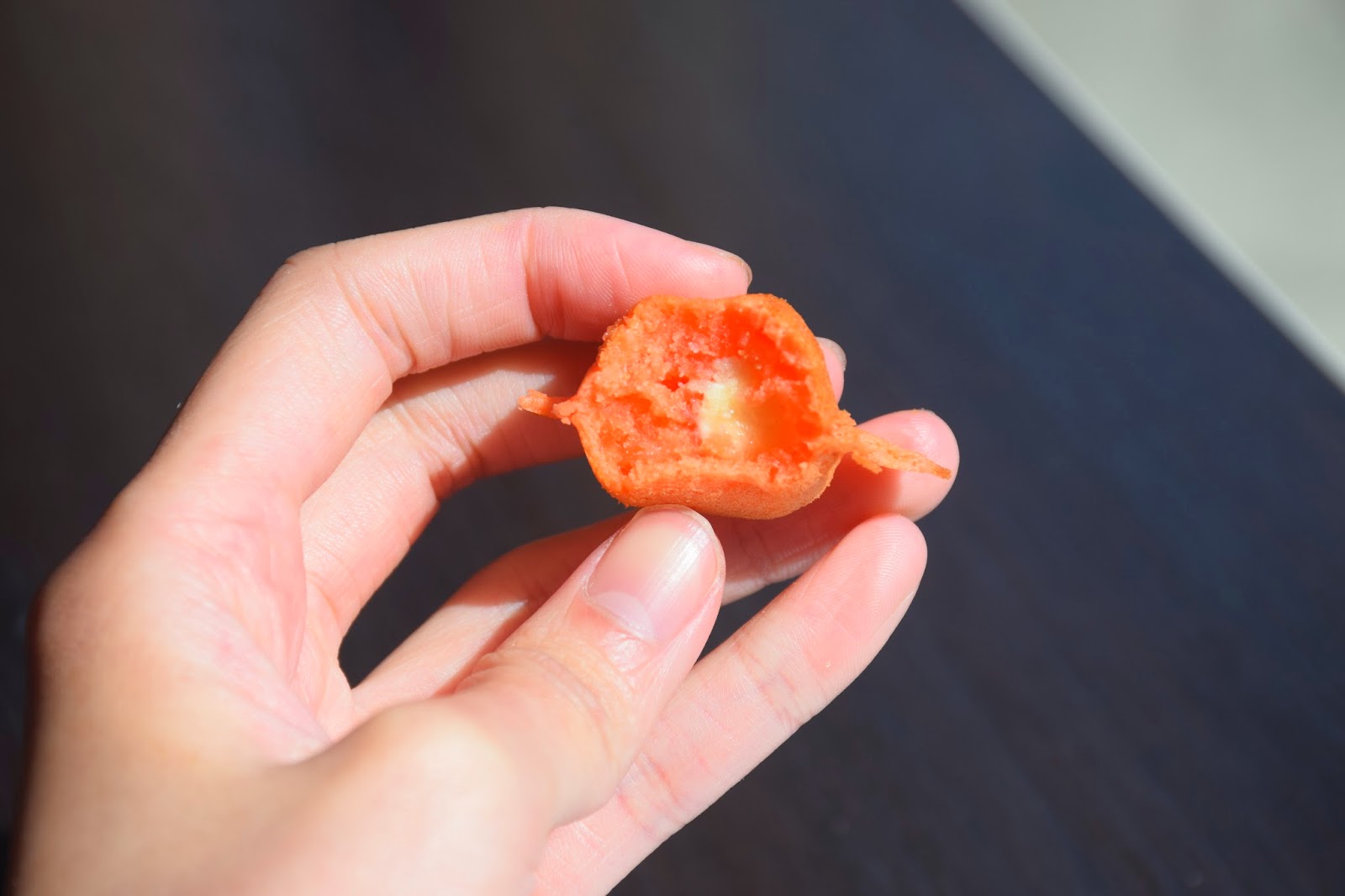 The waffles were as advertised! Almost every bubble had white chocolate in it! I checked haha 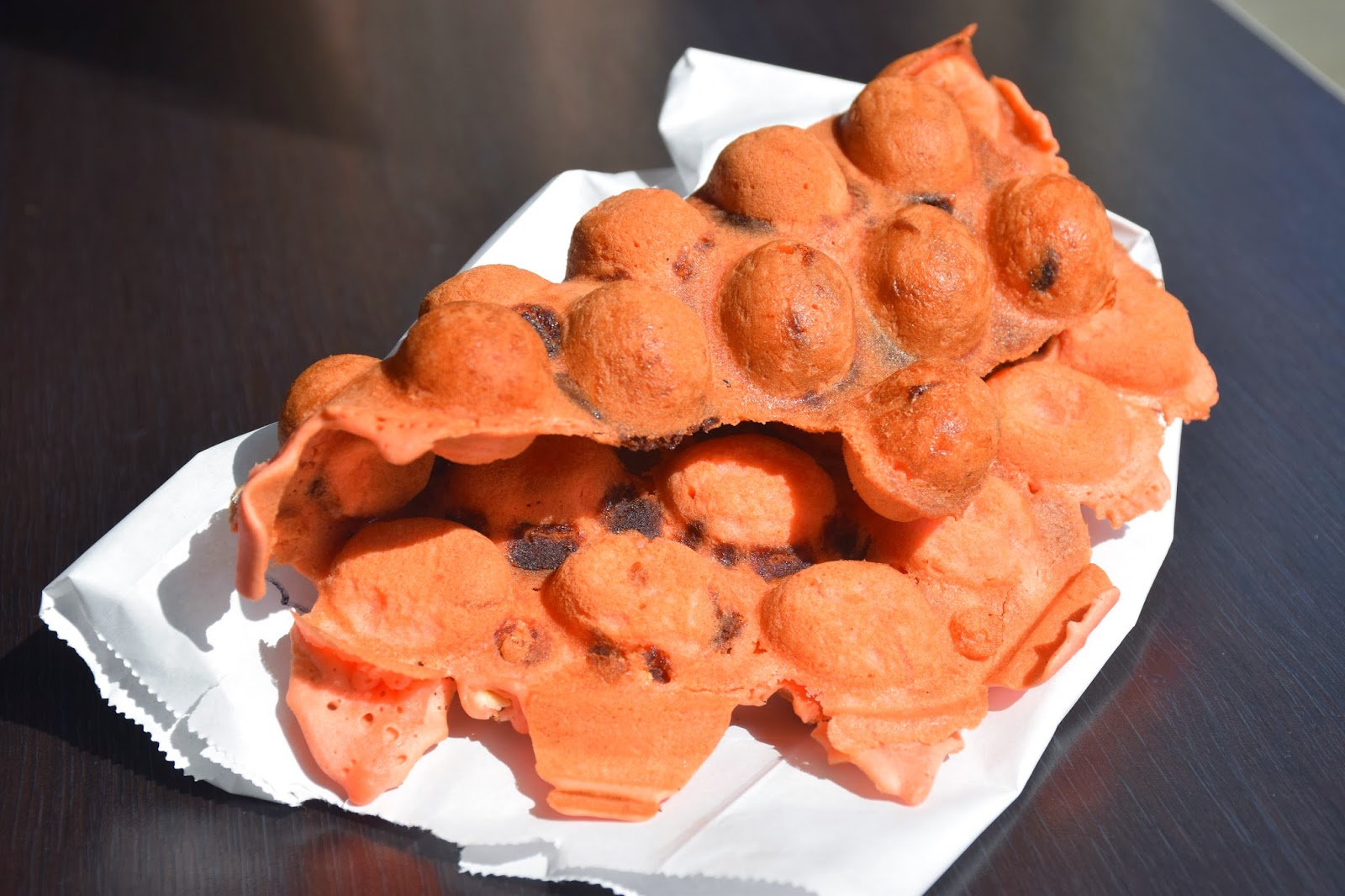 The first time I ordered the strawberry bubble waffles they were terribly burnt...they still tasted great though! :D

4/5 stars
Two of my favourite things: mochi + matcha, combined in a bubble waffle? Yep, pretty much the perfect combination! The mochi is soft and gooey. It's mainly for texture though, because the mochi itself doesn't taste like anything haha. The soft mochi is an amazing contrast to the crispiness of the waffle. I was expecting the matcha to be more potent, but it was rather subtle. Despite its shortcomings, it was still delicious! Probably my second favourite after the taro waffle!
4/5 stars
This was great as well! This time the matcha powder was a lot more bitter, which I actually prefer! The red bean was really sweet, and complimented the bitterness of the matcha really well! Their bubble waffles have also significantly improved over the past few weeks because they hired someone to specialize in making waffles, which was a great idea, because the others are always really busy making drinks! He's really nice too haha! He always smiles when he hands people their waffles :D

Here are some photos of the oreo bubble waffle from my previous review!
4.5/5 stars
Oreo, asian style haha! There was a substantial amount of oreo encased in each shell, and the oreo flavour was very prominent. This definitely took a plain bubble waffle to another level! The shell of the waffle itself was pretty sweet, much sweeter than other bubble waffles I've tried. 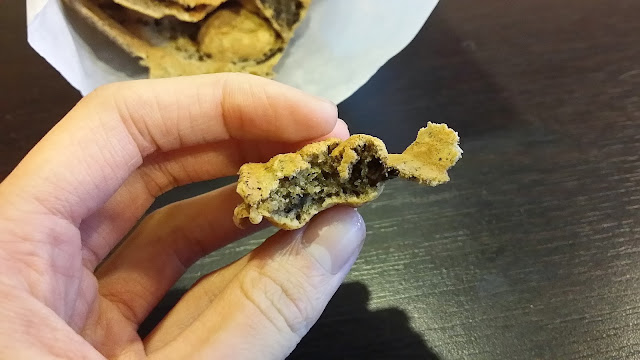 4/5 stars
I saw this in an review on yelp, so I knew I had to try it! They have 3 kit kat flavours: Original, Strawberry and Orange. You also have the option to choose between White, Milk or Dark Kit Kat for your slush. The girl recommended that I go with White, because she said it was the most popular option. This was really great! Surprisingly, the orange didn't taste artificial, it just tasted like milky orange juice haha. The kit kat made the drink really sweet, but I still really enjoyed it! 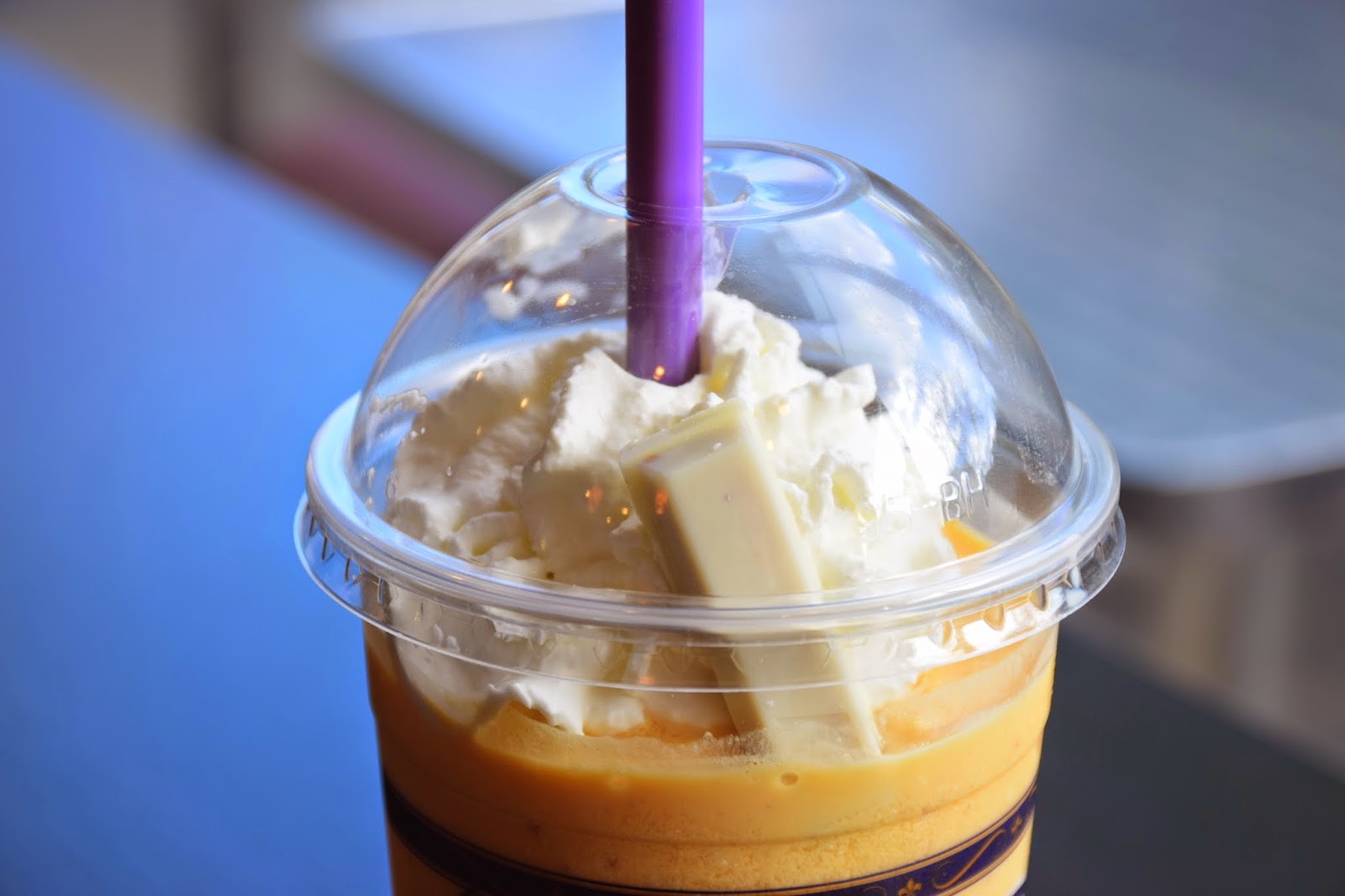 Topped with White Kit Kat! :D
1/5 stars
This was the most fail out of the bunch. However, I'm pretty positive it was due to human error. It hadn't been blended properly, which resulted in it tasting really watered down, and didn't taste like Lindor White at all.


4.5/5 stars
This was really unique and probably my second favourite after the House Special! It tastes really different from a regular milk tea sweetened with sugar, as the black sugar element is really prominent. There's also a potent burnt flavour, which adds another layer of dimension to the drink!
2/5 stars
This tasted rather artificial, but was really refreshing nonetheless! The drink was rather sweet, and the passionfruit was really potent.


1/5 stars
The coconut flavour was cloyingly sweet and artificial. I forgot to ask if they use real coconut milk. In fact, I got a headache after consuming this haha. :(


4.5/5 stars
The almighty mango cube slush...the crowd favourite! The fact that it has fresh fruit in it just makes it 100 times better! They definitely didn't skimp on quality, the smoothie was so frothy, milky and you could definitely taste the mango! The smoothie itself is the perfect level of sweetness, as to not overpower the natural sweetness of the mango. The drink itself isn't actually a slush. It's actually of a thick smoothie consistency. 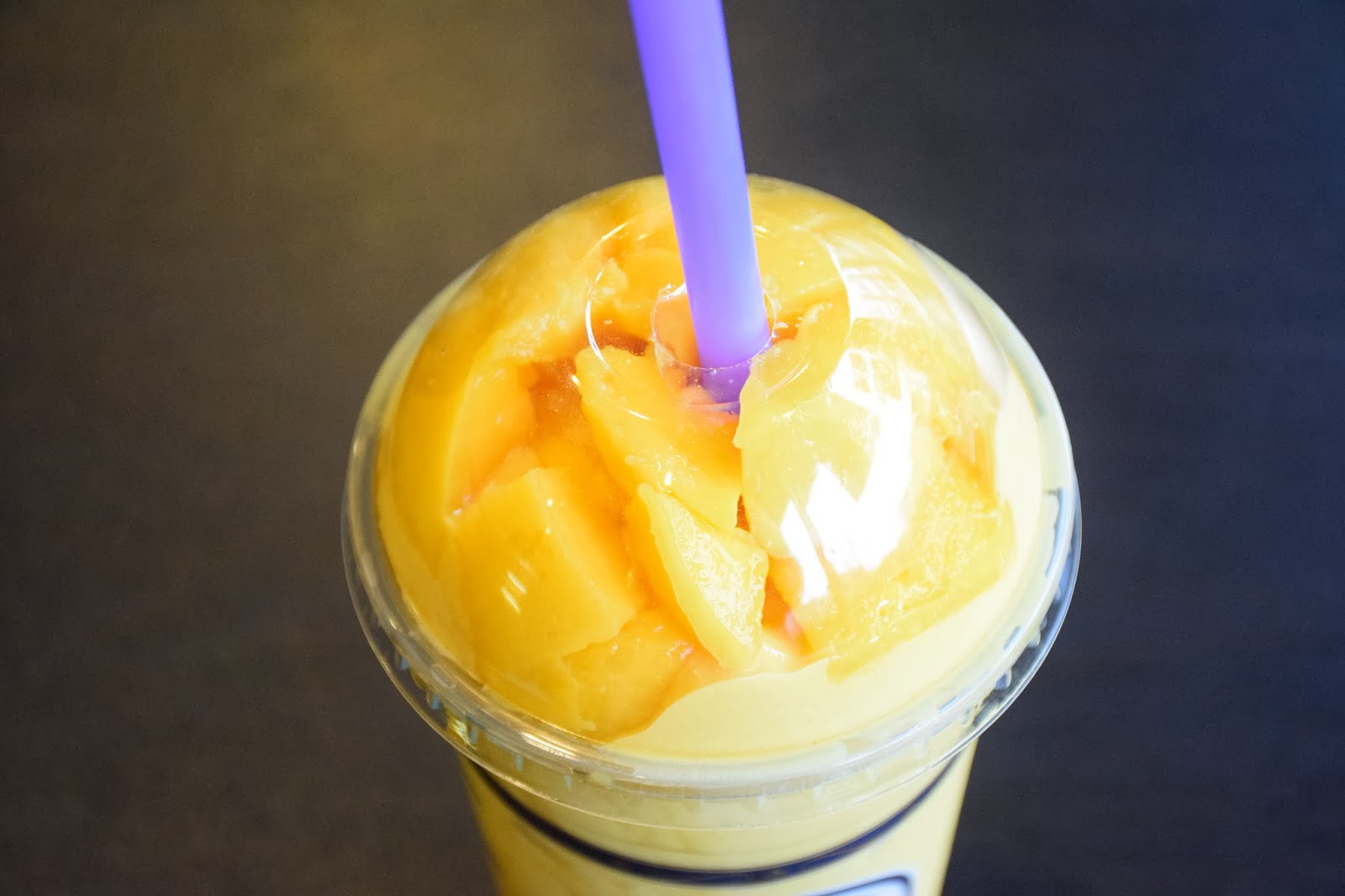 Feast your eyes on those huge chunks of FRESH MANGO!! *drooling*
4.5/5 stars
I've also tried this in the Mochi version when the mango wasn't in season!The drink is filled to the brim with mochi, which is twice the size of tapioca pearls. The texture of the mochi was perfect, it was insanely chewy, and wasn't too soft or overcooked. The drink itself wasn't overwhelmingly sweet either, the sweetness mainly came from the mango in the smoothie. Just look at those juicy, plump, pieces of mochi!


Whew, that was a long post wasn't it? I hope you enjoyed it as much as I did haha! I hope this makes ordering easier or gave you some ideas on which items to try! I hope you have a great summer filled with losta bubble tea :D