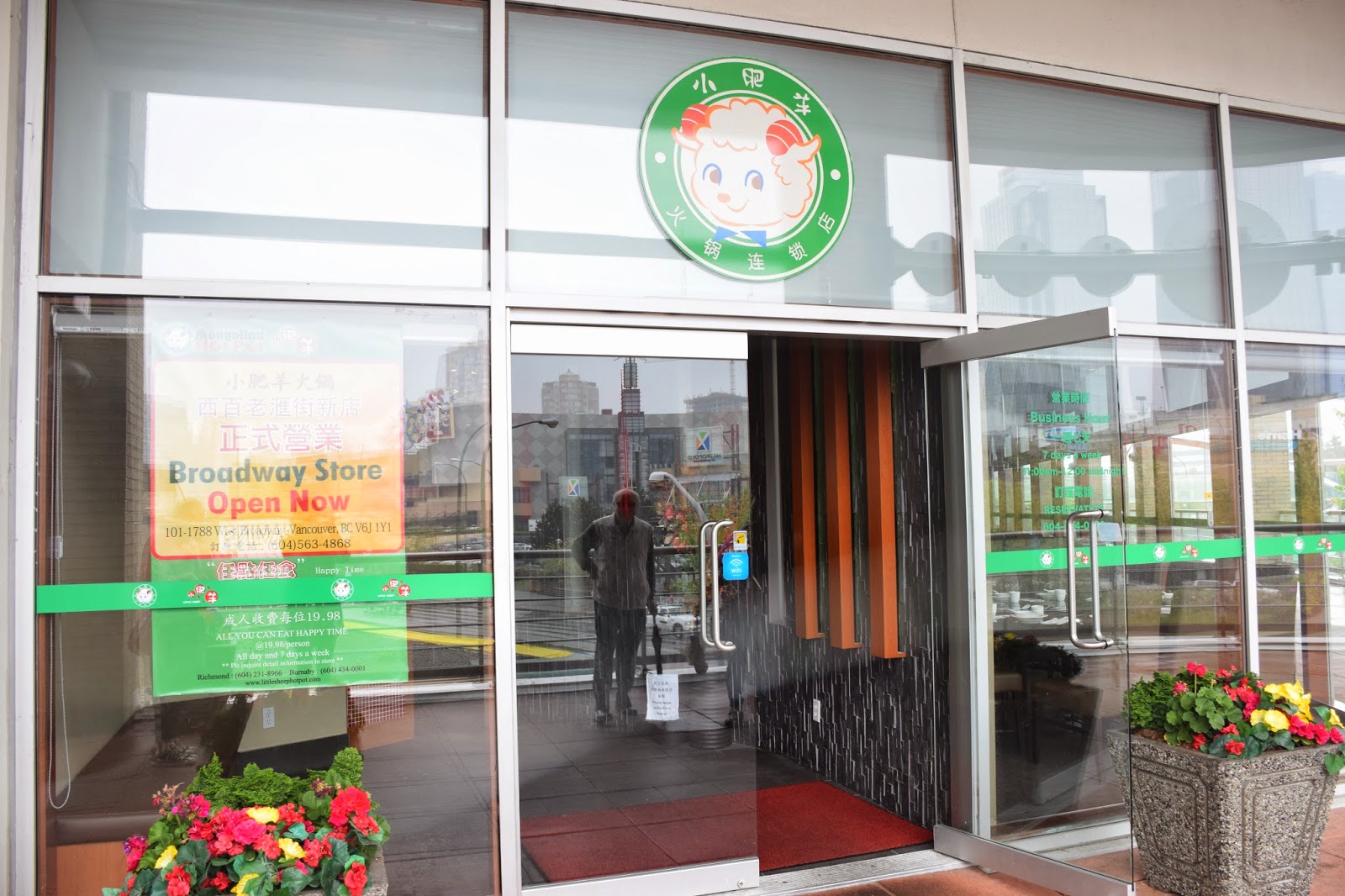 After a few consecutive days of sun, it began to rain again, much to my dismay. Seriously where did the sun go? Given the weather, we decided to jump on our last opportunity to eat hotpot, before the weather warms up again. But who knows, given that Vancouver has bipolar weather, it could be raining again tomorrow haha!

It was a day with the grandparents, so we decided to go to Little Sheep for Hotpot, which is located on the second floor of the Best Buy building, across from Metrotown! Little Sheep is actually a chain, with locations worldwide! I can see why they're so popular, the quality is pretty decent, given the price and portion sizes! They have a huge selection of meats, veggies, seafood, and other hotpot items! You can also get unlimited refills on pop, or plum juice for an additional $2. I love plum juice but I don't like having flavoured drinks with my meals, with the exception of tea, so I didn't add that to my order haha.

I normally don't do ACYE but hotpot is an exception haha! For me, AYCE hotpot is the only way to go haha! I'm never satisfied with the mini individual hot pots you can order at restaurants because the portion sizes are so small, plus you don't get to cook your own meat haha! There's something about cooking your own meat in a boiling pot that makes eating that much more intriguing :D

It's especially fun if you're with family or friends, cause you can try more things! If you're a germ freak, your limits might be tested, because everyone eats family style, by sticking their own chopsticks in the broth haha! Hygienic no, but delicious yes! 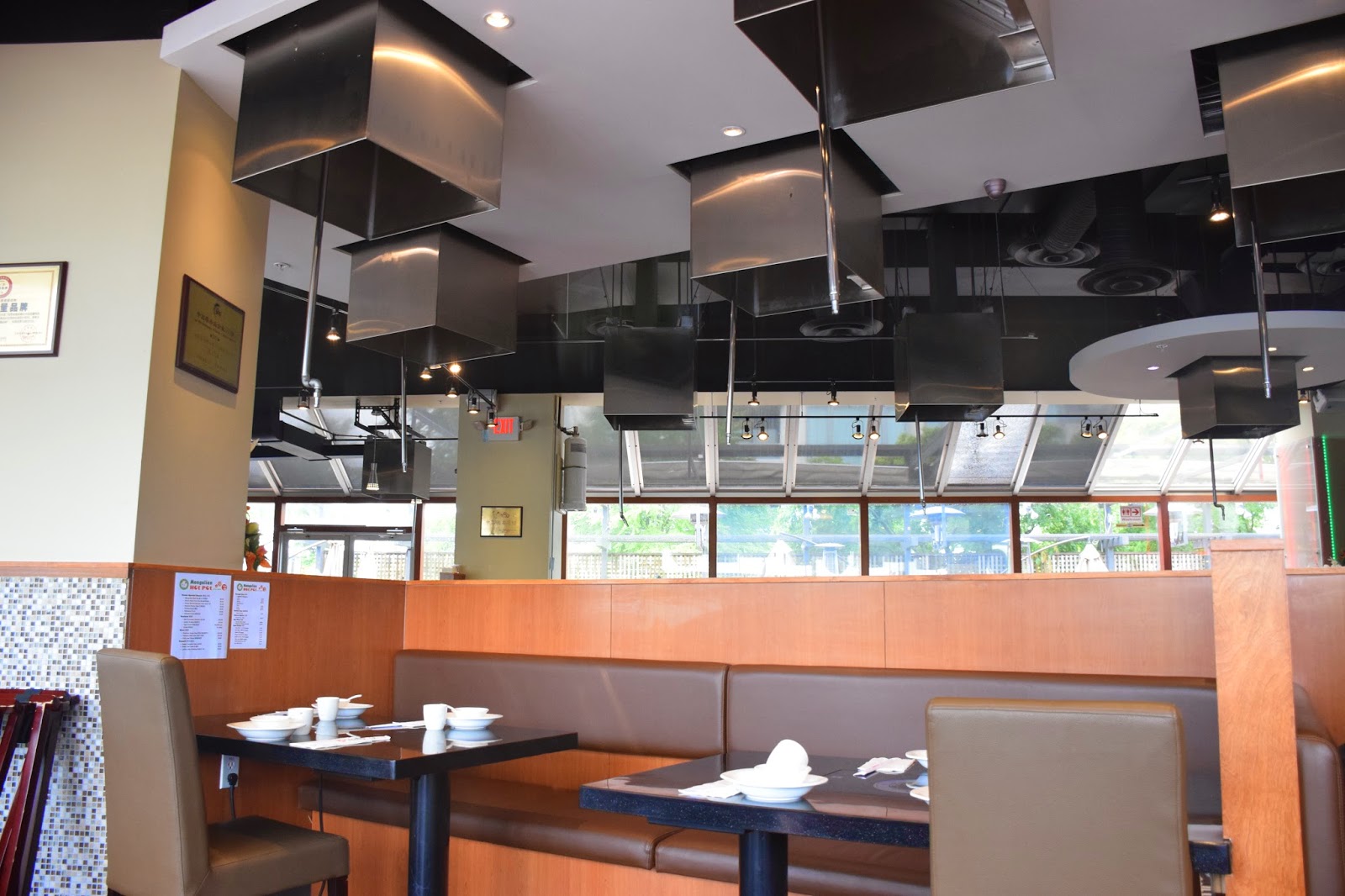 The place is also heavily ventilated which is great, so the air doesn't get stuffy and hot from all the steam emitting from the hotpots! 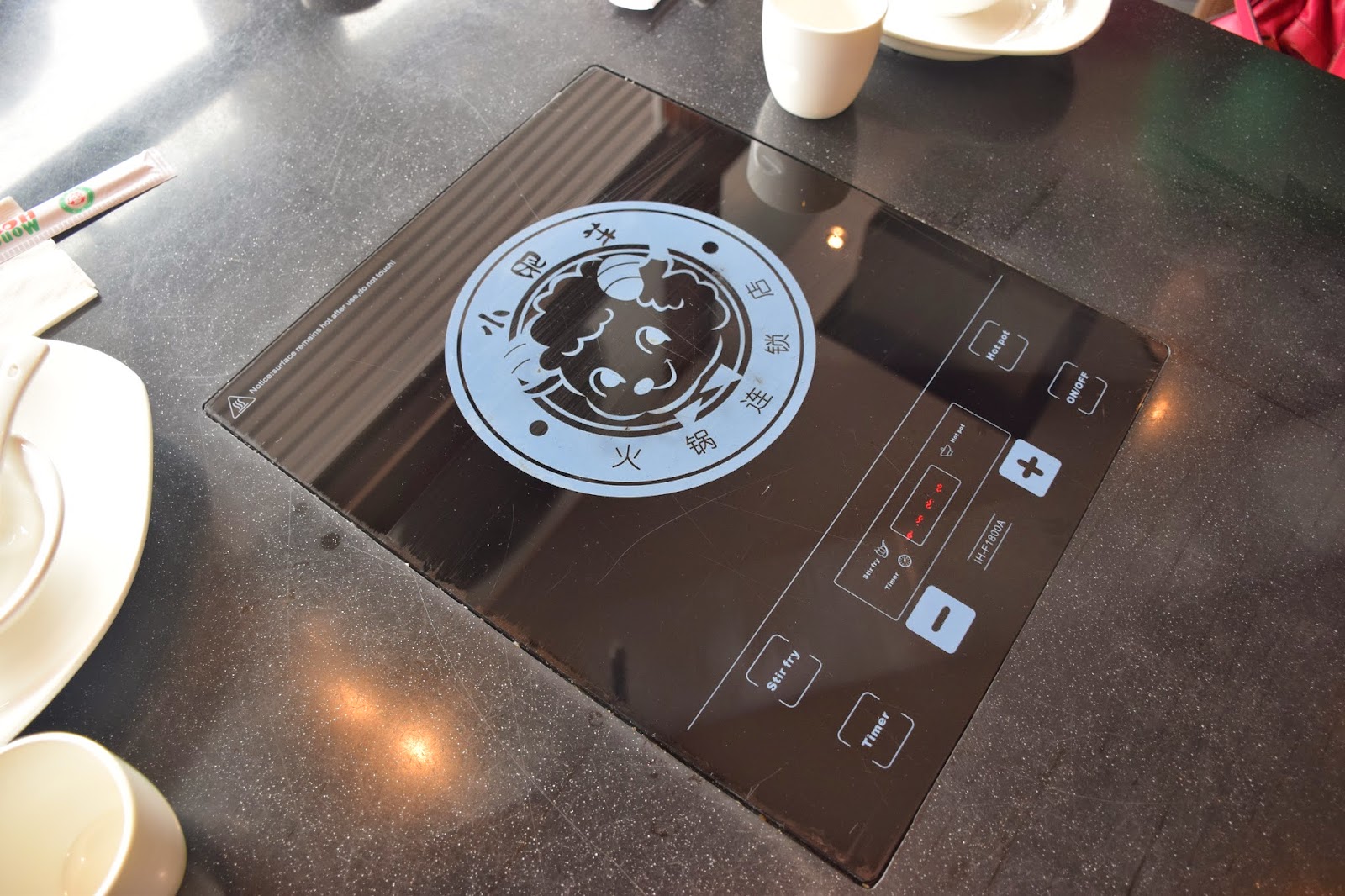 The stove is emblazoned with their logo on it! The stove is also touch controlled, which I thought was a lot more high tech than other hotpot places haha! We were seated by the window at a very large table meant for 6, which was great, cause we definitely needed the table real estate haha! 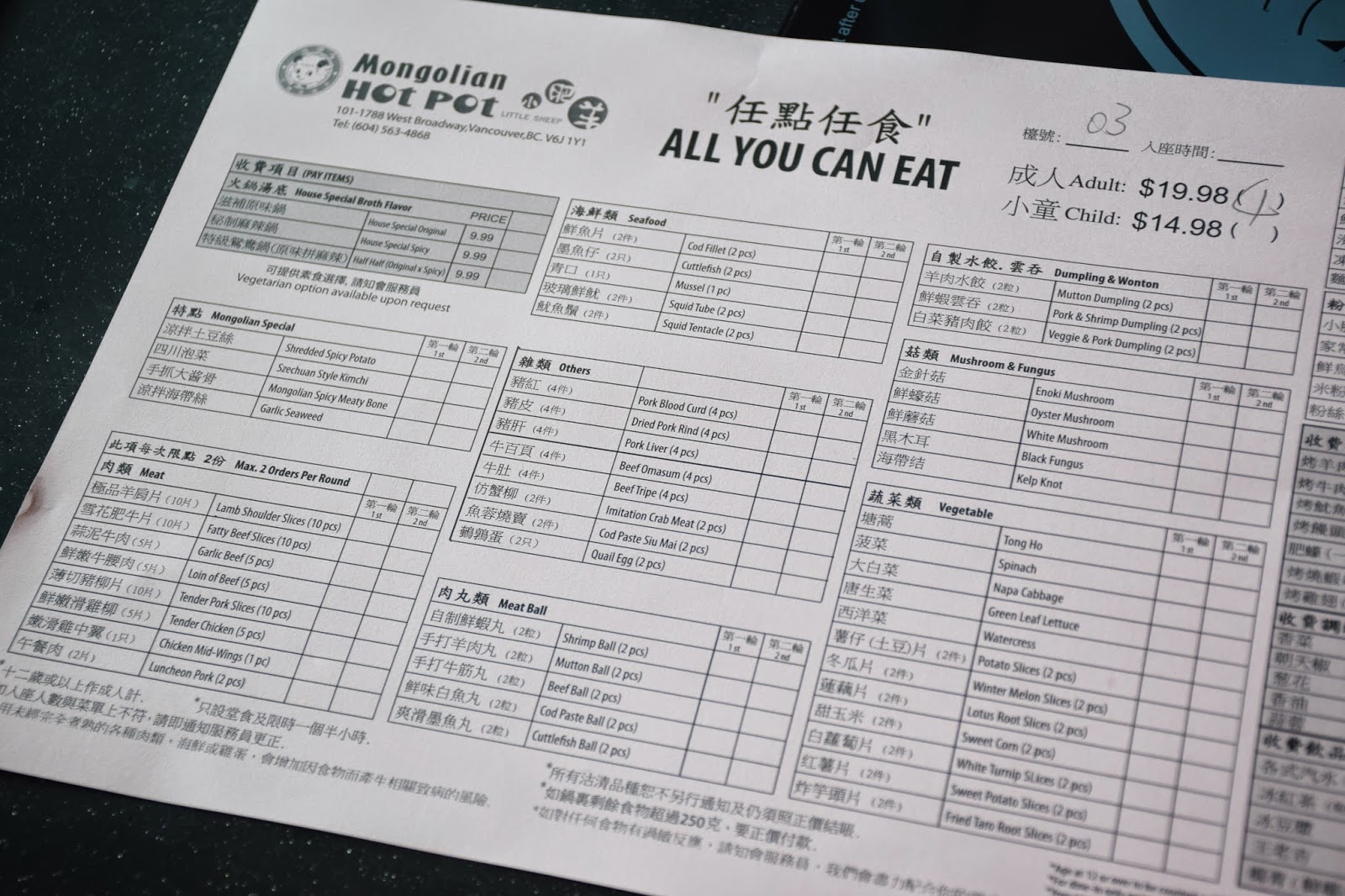 Here's a look at their menu! The selection was huge, and since we had 4 people, we ordered a portion of everything x2 haha! And yes, we did manage to finish everything harharhar. I inherited my appetite from my mom and grandma! My grandma is 75 and can still eat just as much as me without fail, which is a lot haha! 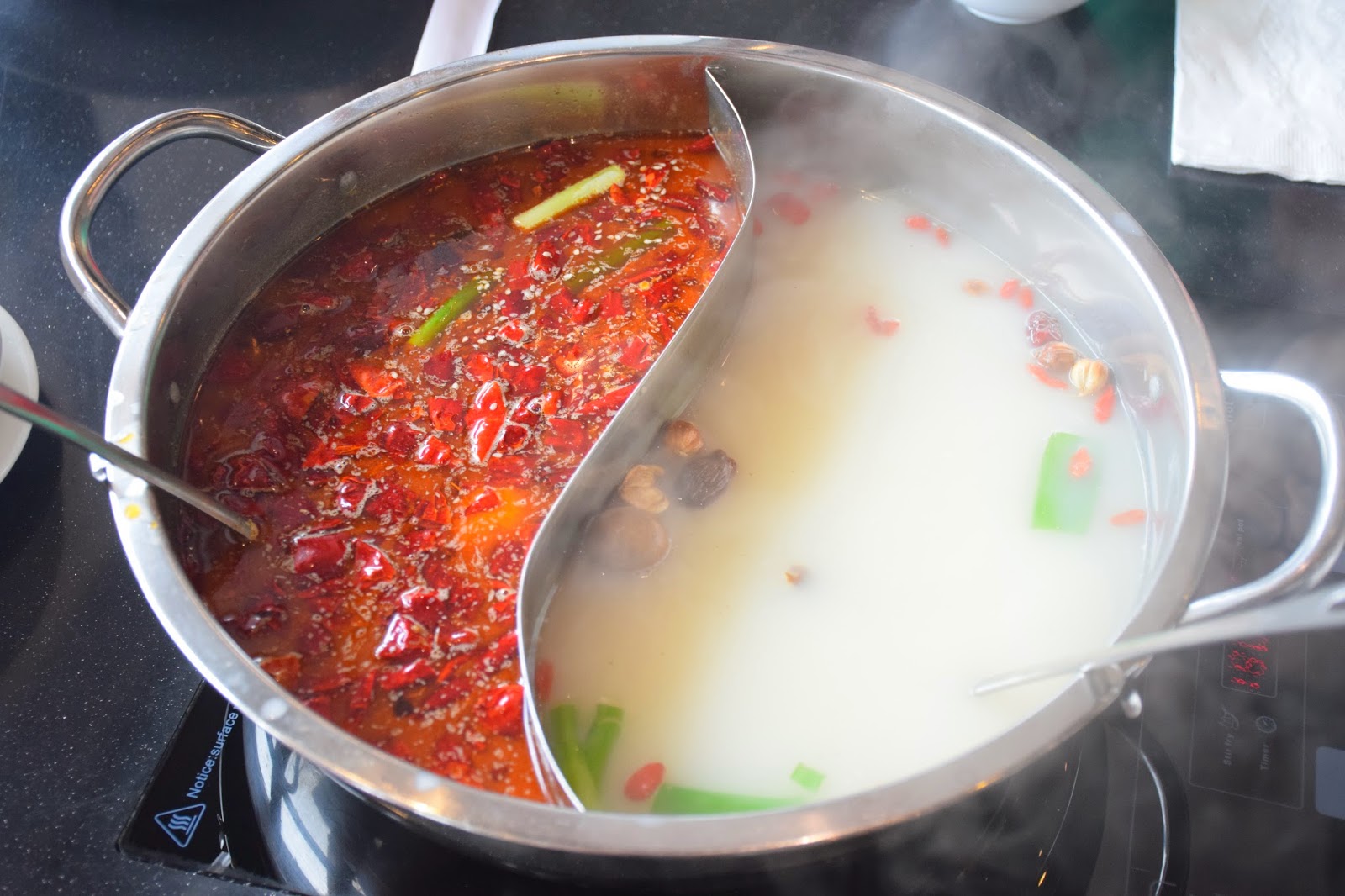 We decided to get the mix broth, which is half of their original Mongolian broth and half of their spicy broth! Don't be deceived by the erroneous amount of red pepper in the broth haha, because surprisingly it wasn't even that spicy! My grandma kept adding chilli oil because she didn't think it was spicy enough! 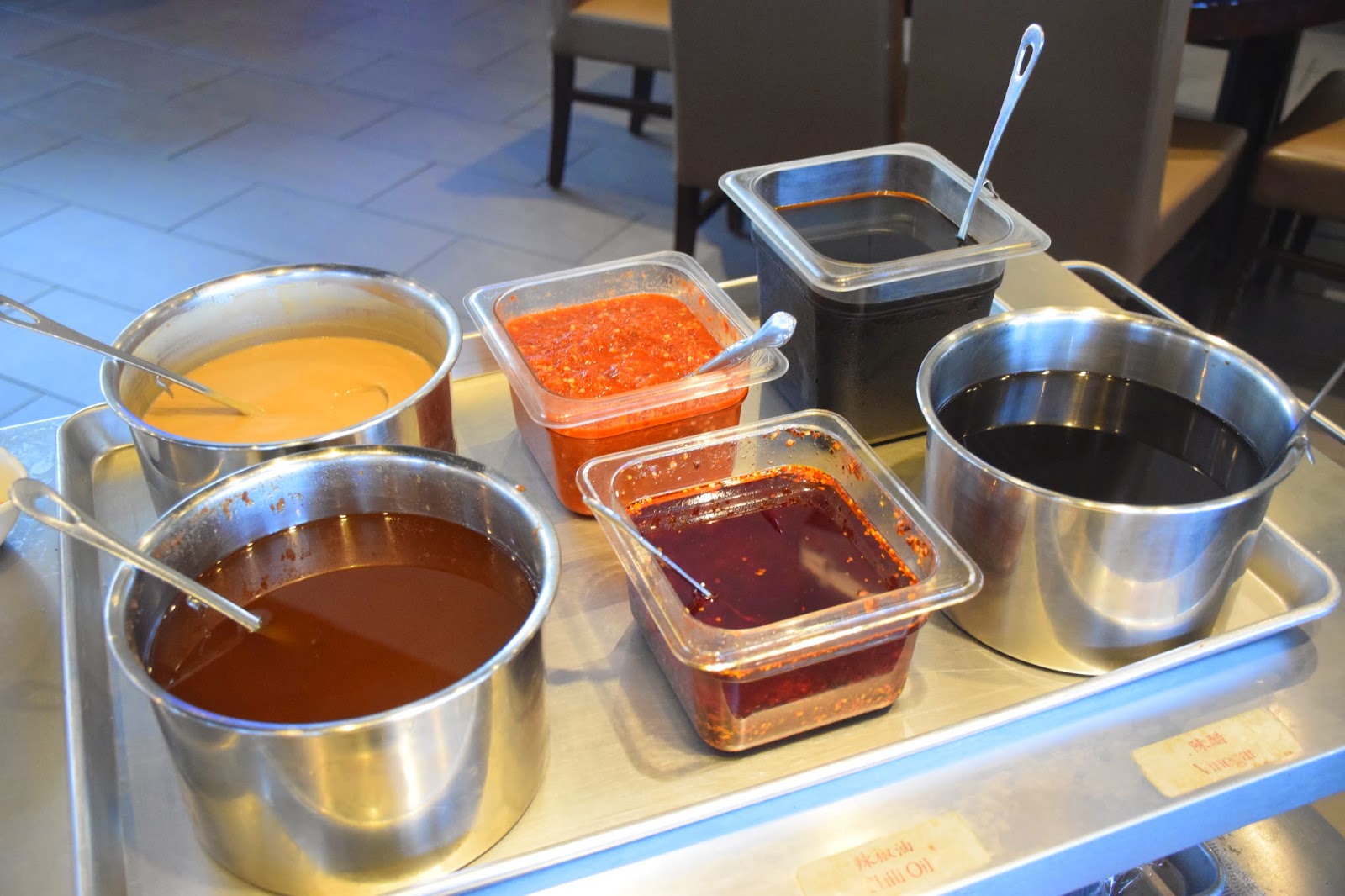 Their sauces are also self serve, which is great, because some places actually charge for sauces, which I think is pretty lame haha. They have a selection of peanut sauce, chili paste, chilli oil, soy sauce, vinegar, and my personal favourite: satay sauce! 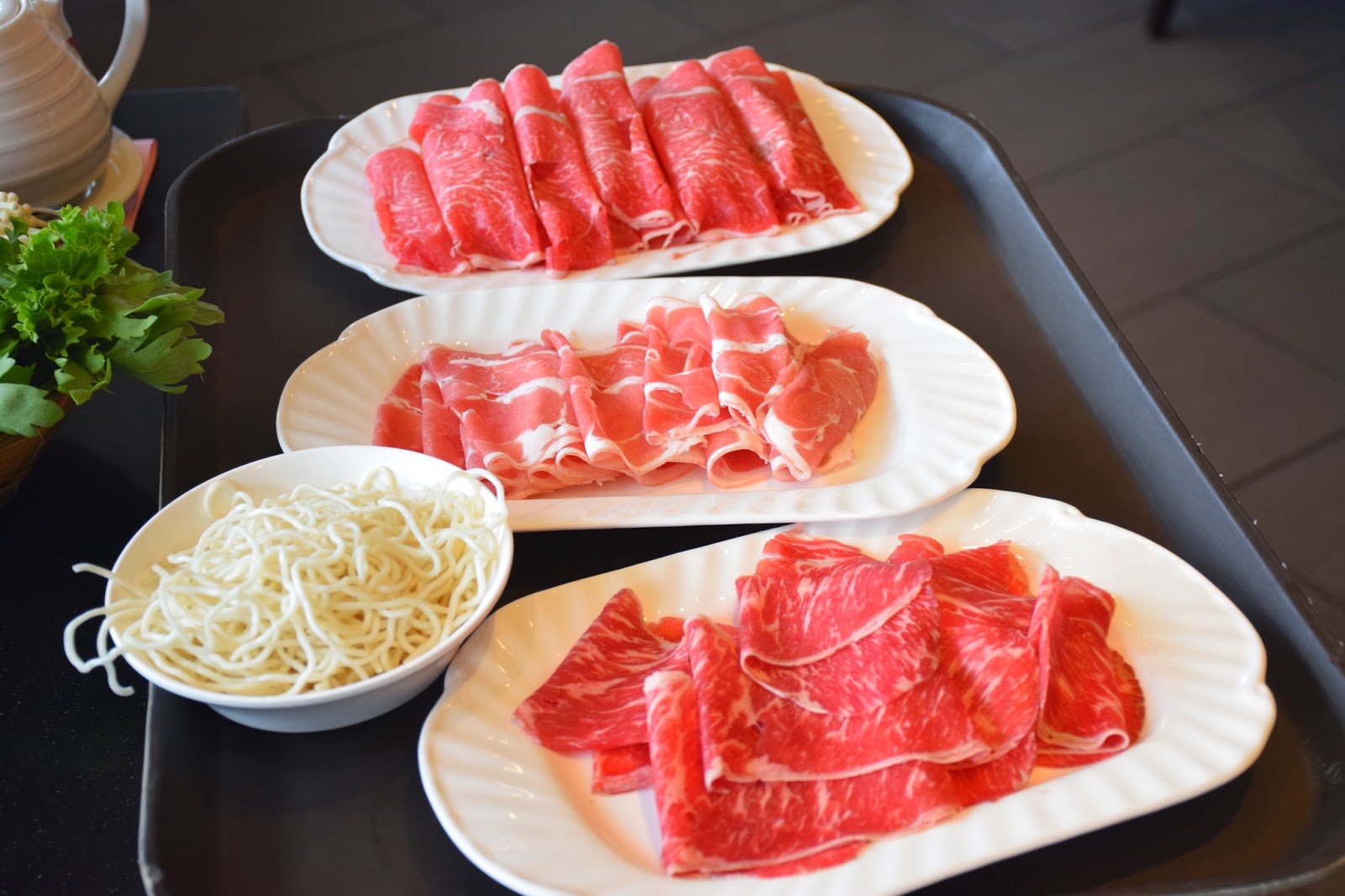 From left to right: Pork, Lamb, Beef
Our first order of meat! For the first round of ordering they give you more, and when you order the second time around the portion size significantly decreases because they know that you probably won't be able to finish it, and from what I observed, most tables don't! We also ordered 2 portions of noodles, which I didn't eat. I was too busy filling up on meat haha! It's the only way to get your money's worth! ;)
All of the meat was sliced really thin and tasted reasonably tender! The meat picks up a ton of flavour from the broth, so you can definitely forgo the sauce! Just don't let the meat cook too long in the pot or else it's going to become rough and overcooked! 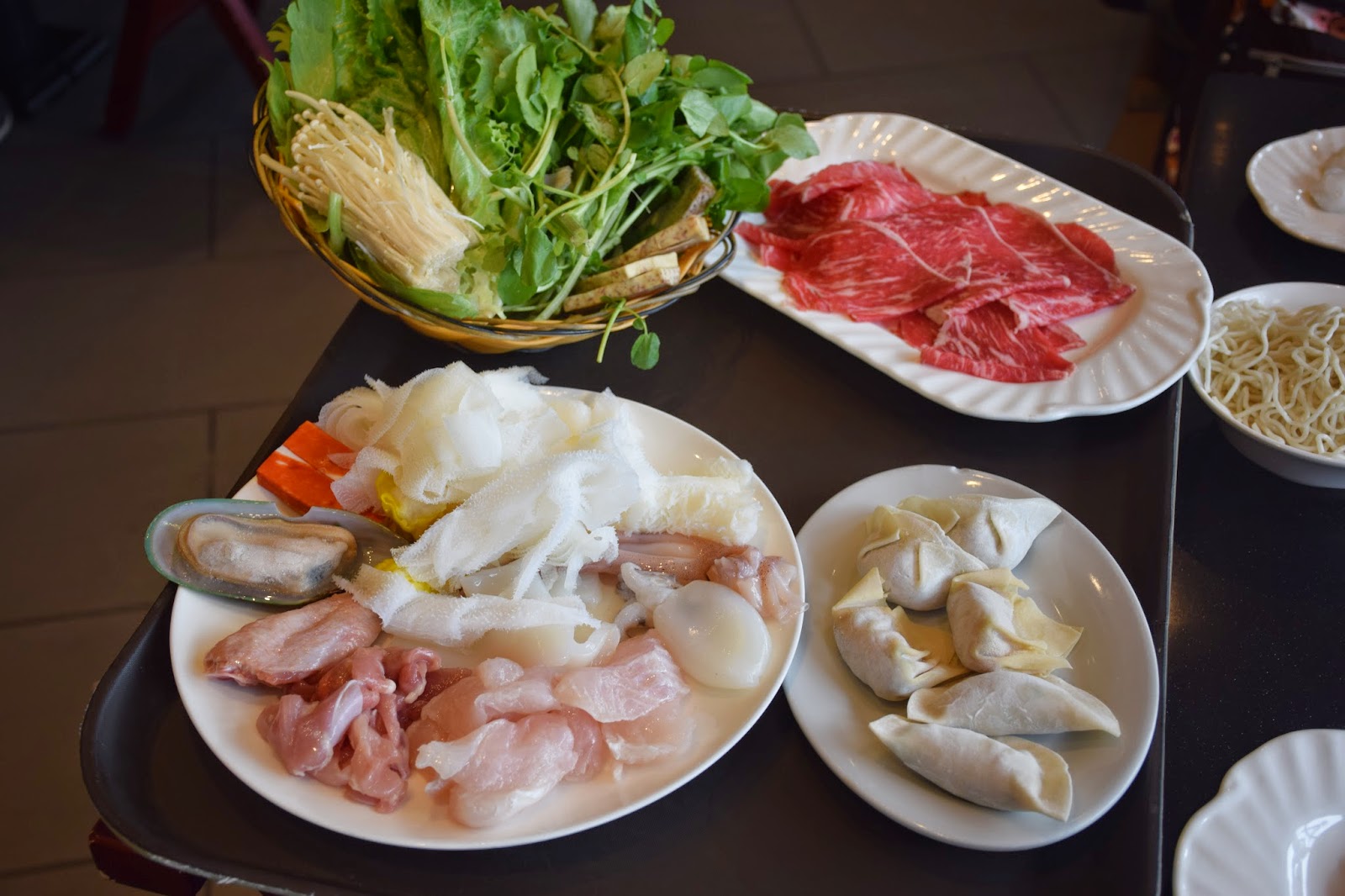 Here's our order of seafood, vegetables, and dumplings/wontons! Most of the seafood items only come in individual pieces, so if you want more, be sure to order extra! 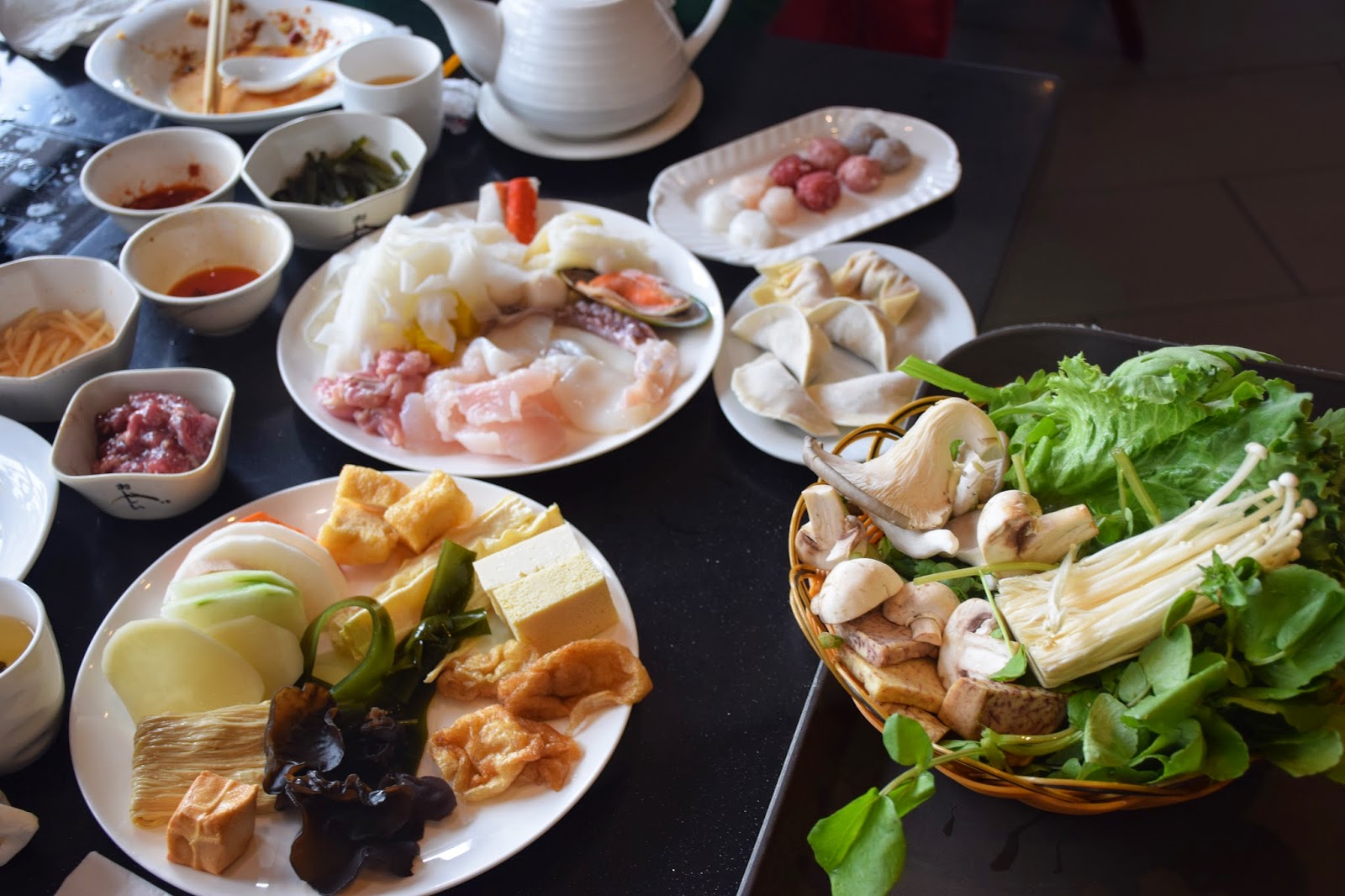 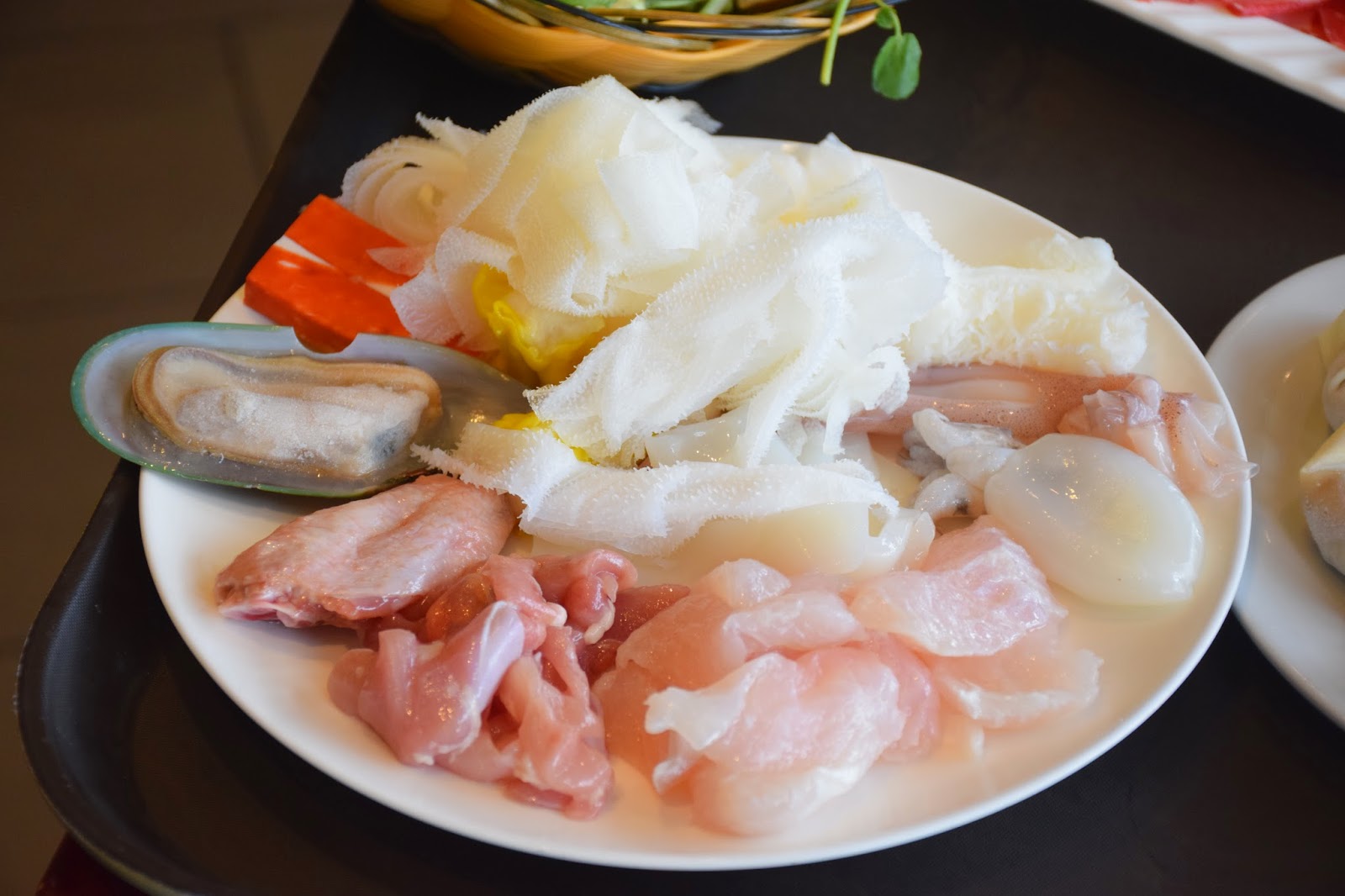 Here's a closeup of the seafood, beef tripe, and chicken haha! The seafood quality was alright given the venue and price! There was even a baby squid, which I thought was cute...and delicious :D 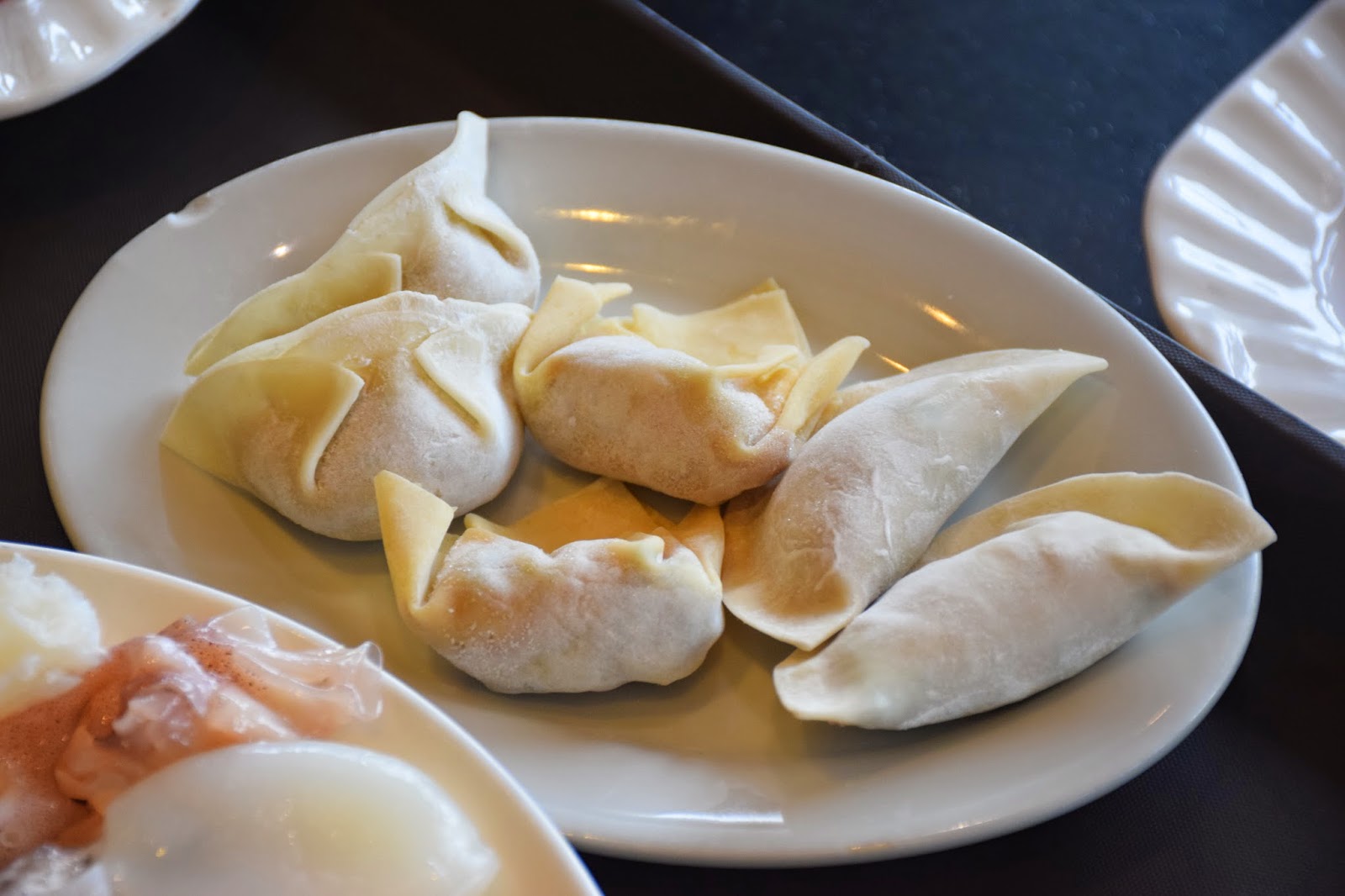 The dumplings/wontons were decent, the filling tasted like frozen prepackaged dumplings, because that's what they were! The skin was actually quite thin and wasn't doughy at all, which was a pleasant surprise! It was nice to have as a side, since we didn't order any rice haha 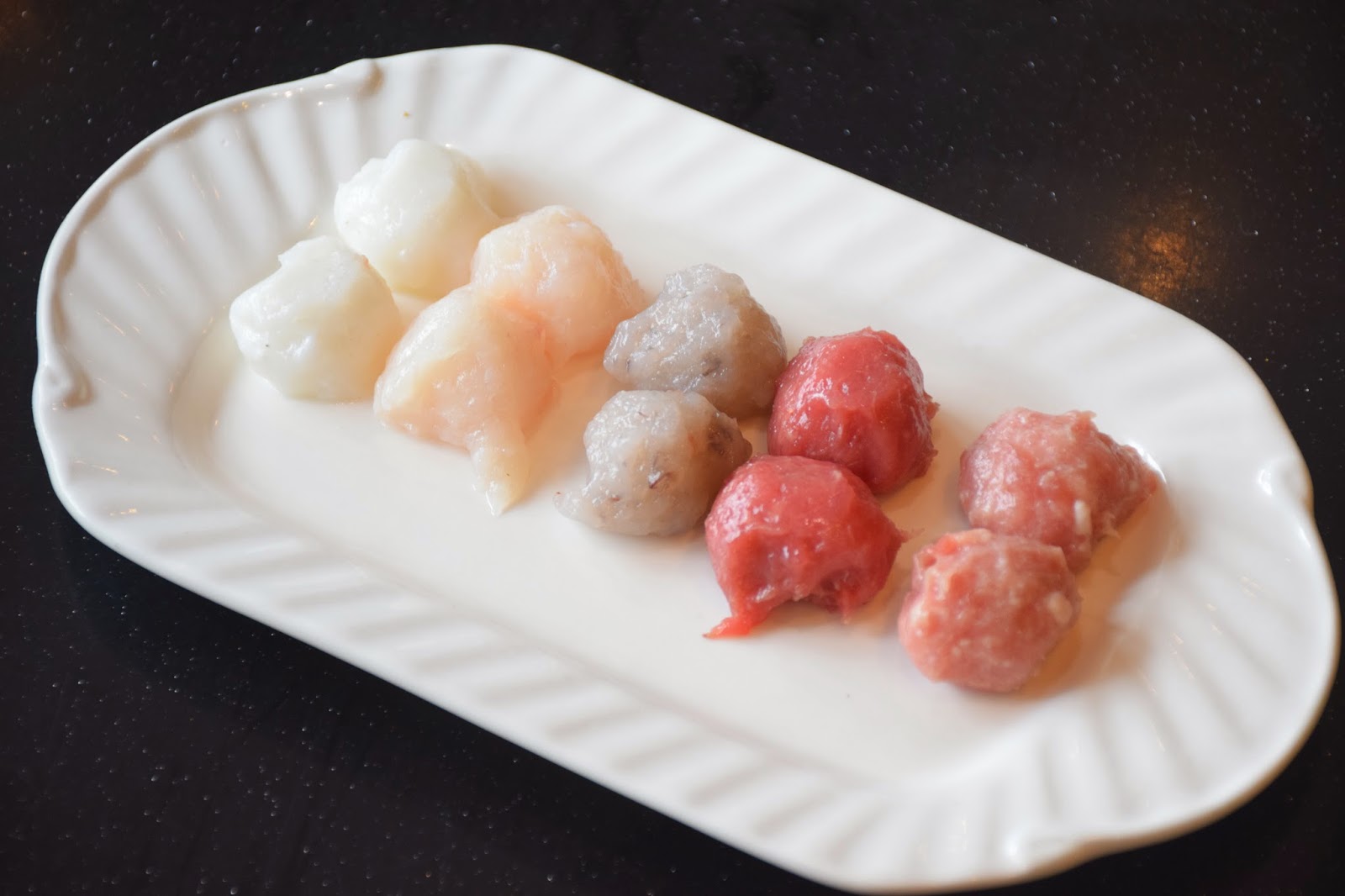 Shrimp, Mutton, Beef, Cod Paste, Cuttlefish Balls!
These were all really tiny in size and really chewy! Each of the balls had their own distinct flavour and were all pretty tasty! 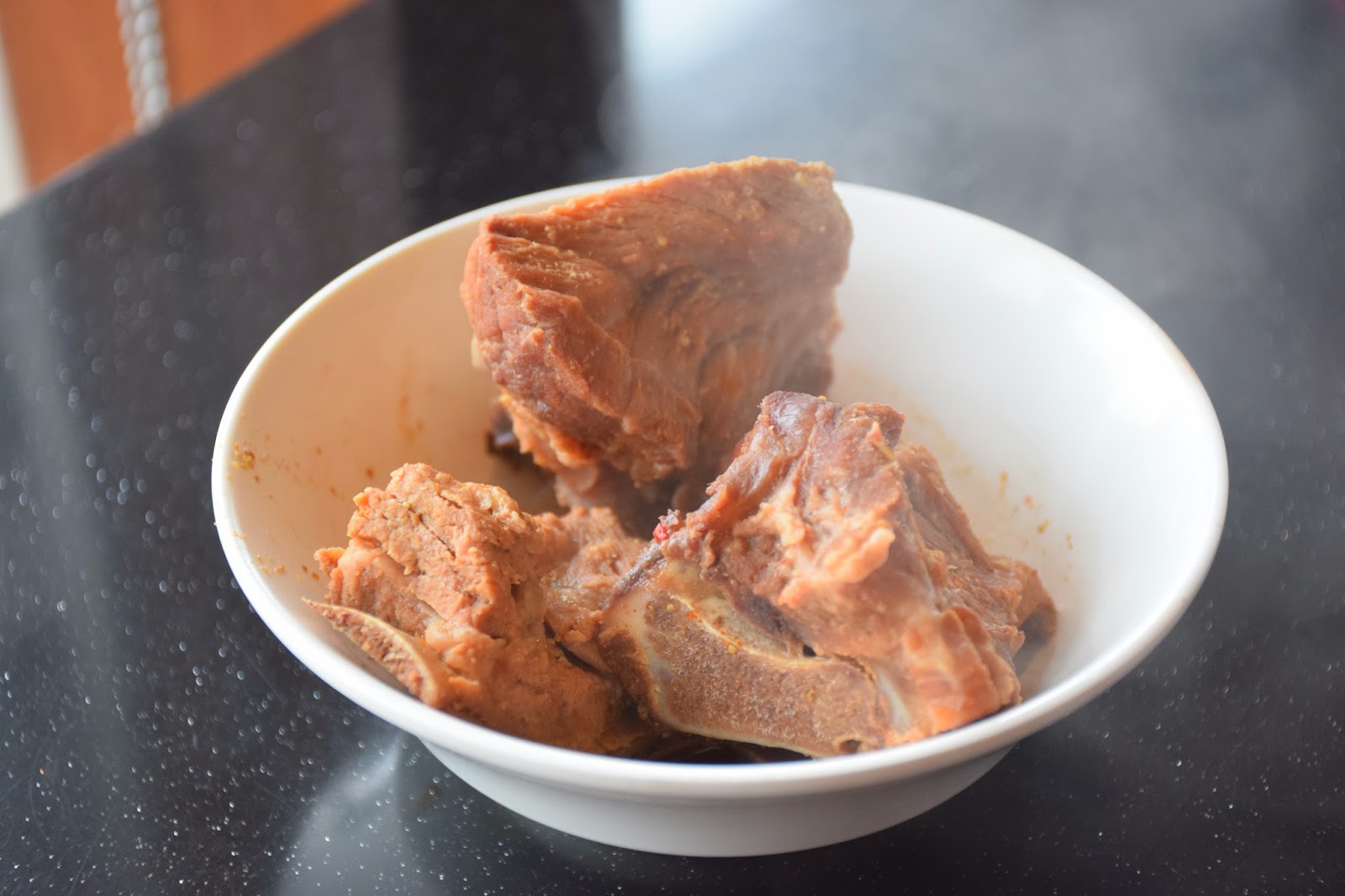 Pork Bone
This was probably my favourite meat item! We were all expecting this to come plain when we ordered it but it was actually marinated in a delicious broth, making it super flavourful and fragrant! The meat is brought to you piping hot, you can see the steam in the photo! When the waitress brought over my second order of this she said "You like it huh? It's one of my favourites too!"


Service was great too! Our server was chatty, and they were diligent with refilling our broth, tea, and bringing us our orders! We even got $5 off vouchers for our next visit, which I was really happy about because my dad has never been to Little Sheep, so maybe I'll go again next week to the Richmond location haha!
Overall, Little Sheep is a solid option for AYCE hotpot in the Metrotown area, but if you're looking for more of a selection, I recommend you check out Richmond, which is over saturated with ayce hotpot joints haha!