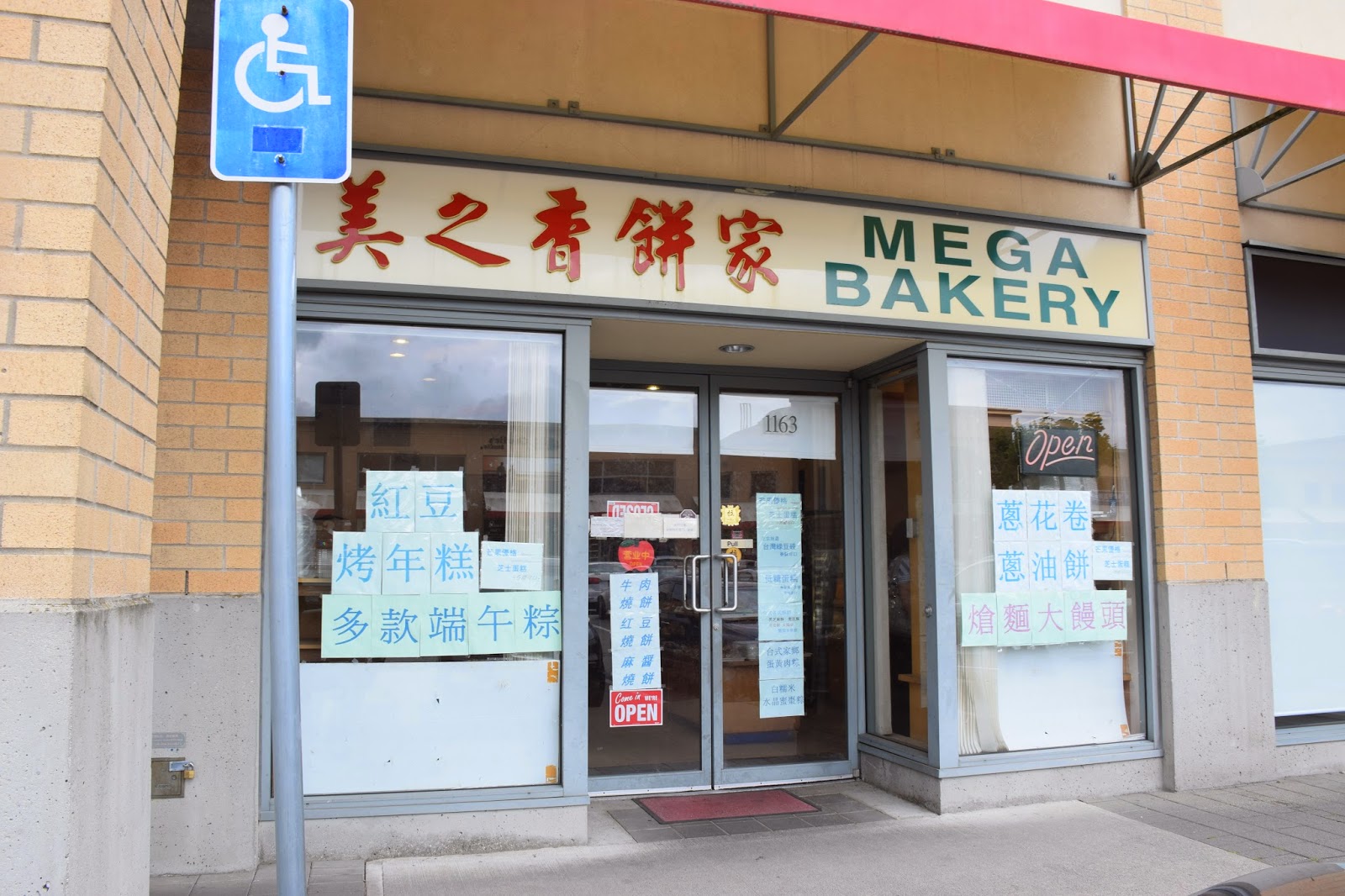 I've been on the hunt for a great Taiwanese bakery as of late, and I stumbled across Mega Bakery while we were making a pit stop for BBQ meat in Continental Centre! My dad loves getting char siu from Landmark BBQ in Continental because it's really cheap haha. He usually gets char siu on rice, but since the rice hadn't been cooked yet, I said "Hey dad, let's get some bread from the bakery next store instead, to eat with your char siu!" He reluctantly shrugged and we went in!

This place looked very promising, as the customer flow was consistent, and pastries were selling out fast! Since we were in a hurry, we decided to pick up a few savoury options for lunch plus some desserts!

The prices are a bit higher than your average asian bakery, but after biting into their bread, I knew why. It was so moist, fluffy, and fragrant, in a league of its own!

Oh and if you've been following me for a while now, you may notice that the format of this blog post is a throwback to my old writing style, where I would hold an item in my hand, with the tile flooring as the backdrop haha! 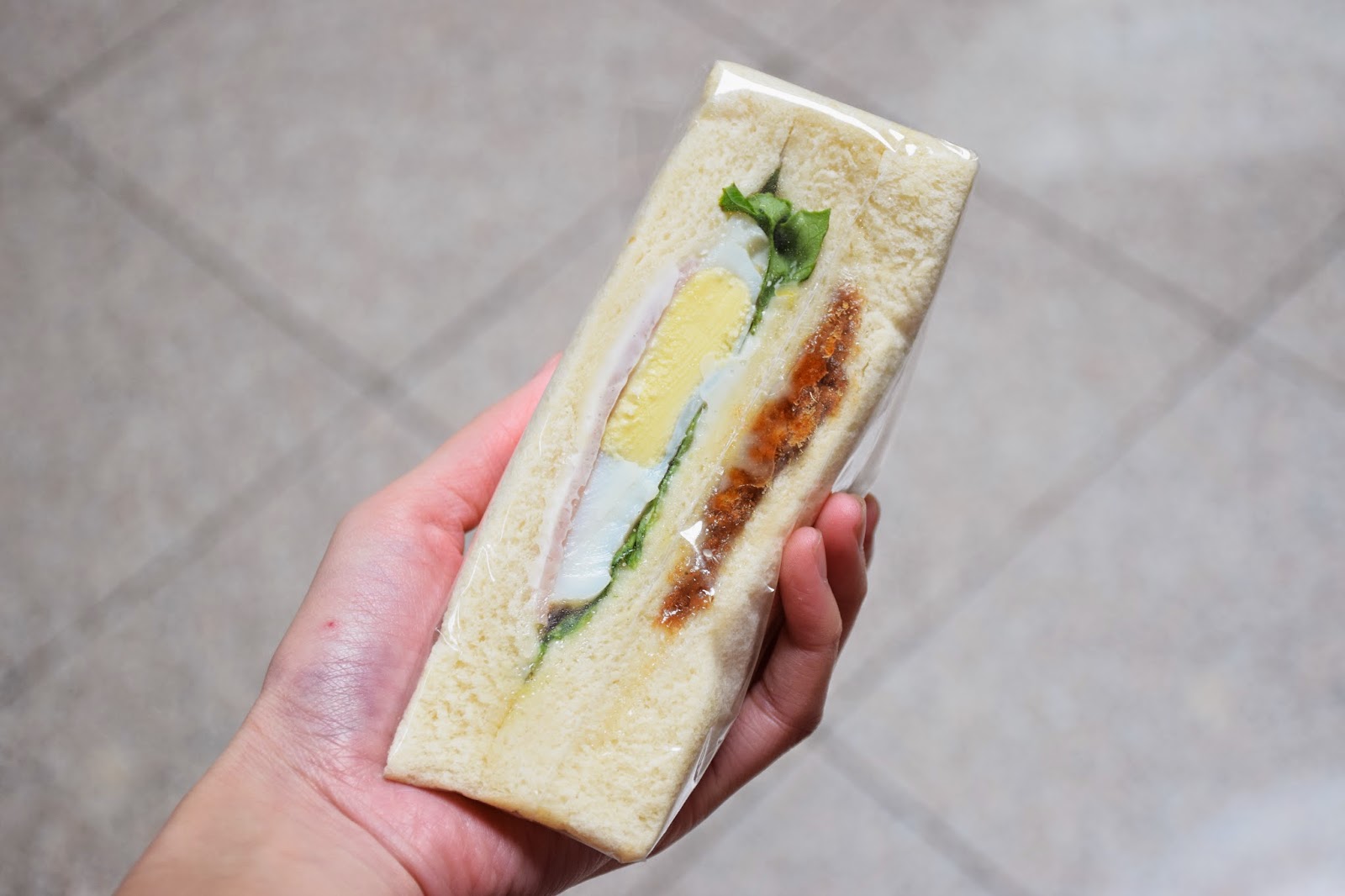 Luncheon Sandwich
3/5 stars
For a basic sandwich, this was great! The bread was especially impressive! It was moist, and wasn't dense at all! They didn't skimp on the filling either! It tasted well above average, and sufficed as a quick lunch option. While I was in the store I saw a girl pick up 10 of these haha! 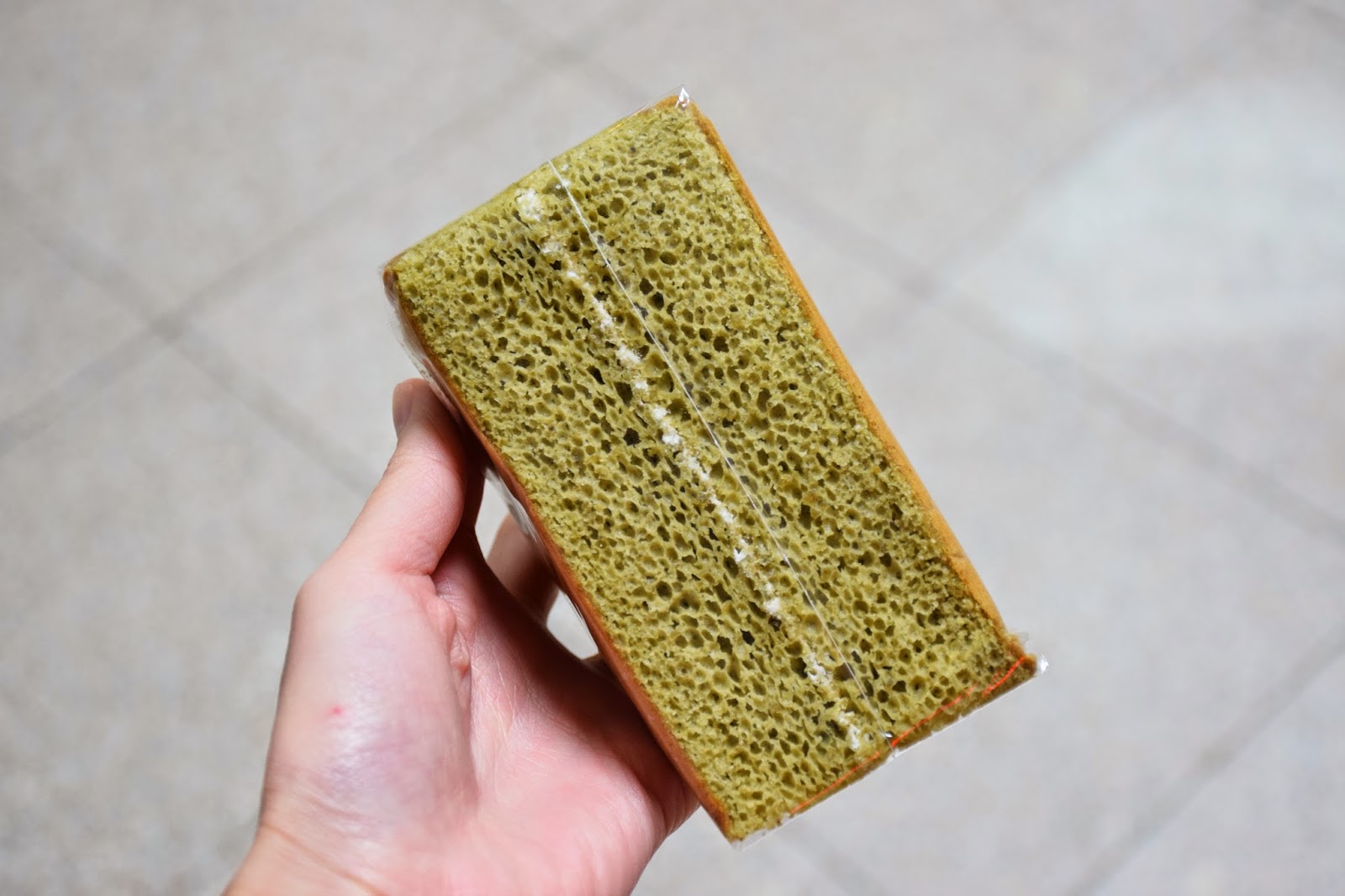 Green Tea Cake
4/5 stars
This was fantastic! Dare I say one of the best matcha flavoured cakes I've ever tried in Richmond haha! Their cakes are super light, airy, and moist, just like their bread! Every bite was filled with creamy, airy, matcha goodness! The green tea flavour was very potent, without being too bitter. There was also a thin layer of cream in the middle, which added an extra sweetness to the cake. They also have a few other flavours, including mango and sesame! 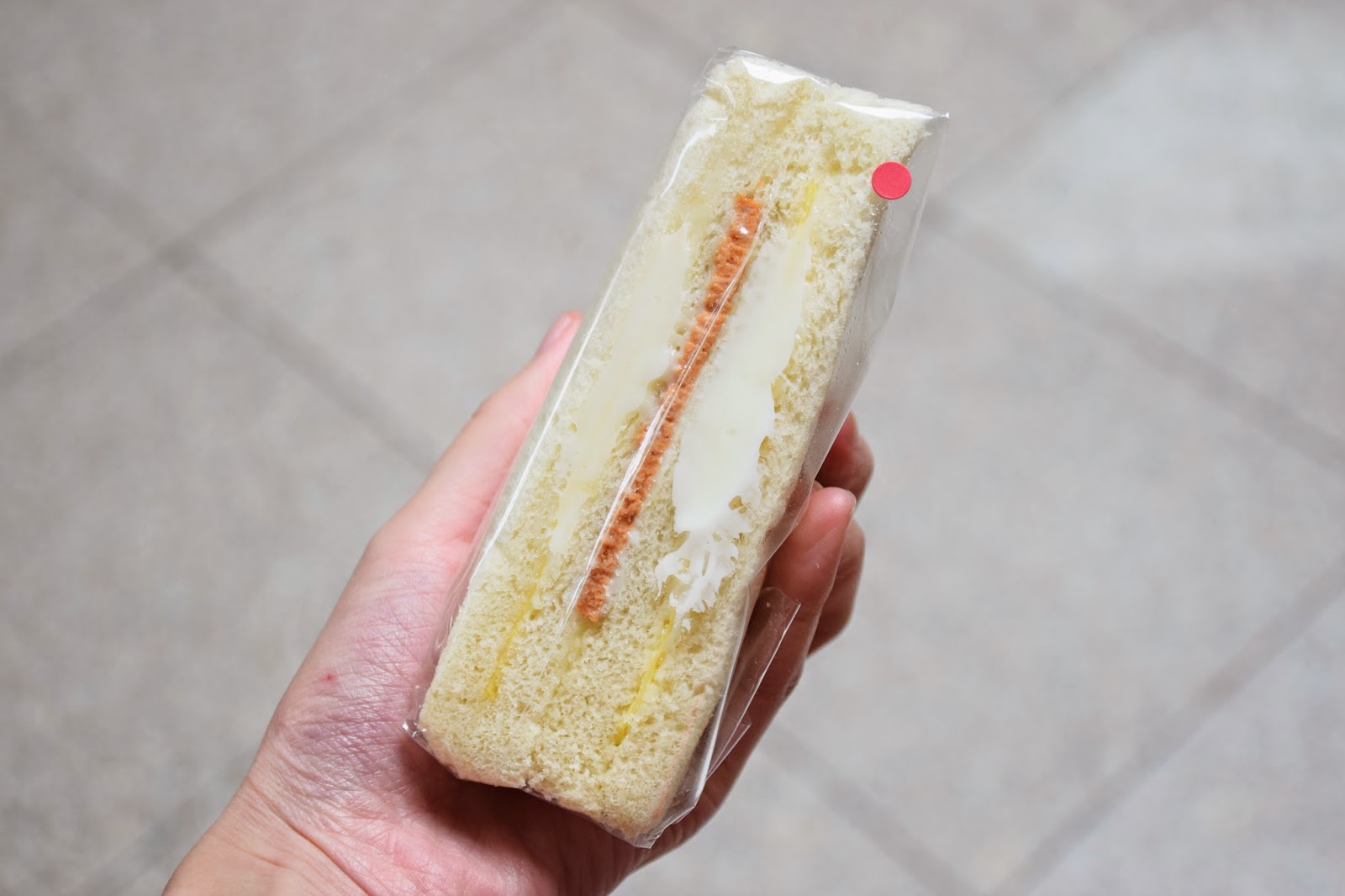 Tuna & Egg Sandwich
4/5 stars
This was better than the Luncheon sandwich! While it was on the smaller side, with a thin layer of tuna and egg, it packed a punch in the flavour department! This would make for a great light snack or breakfast on the go! 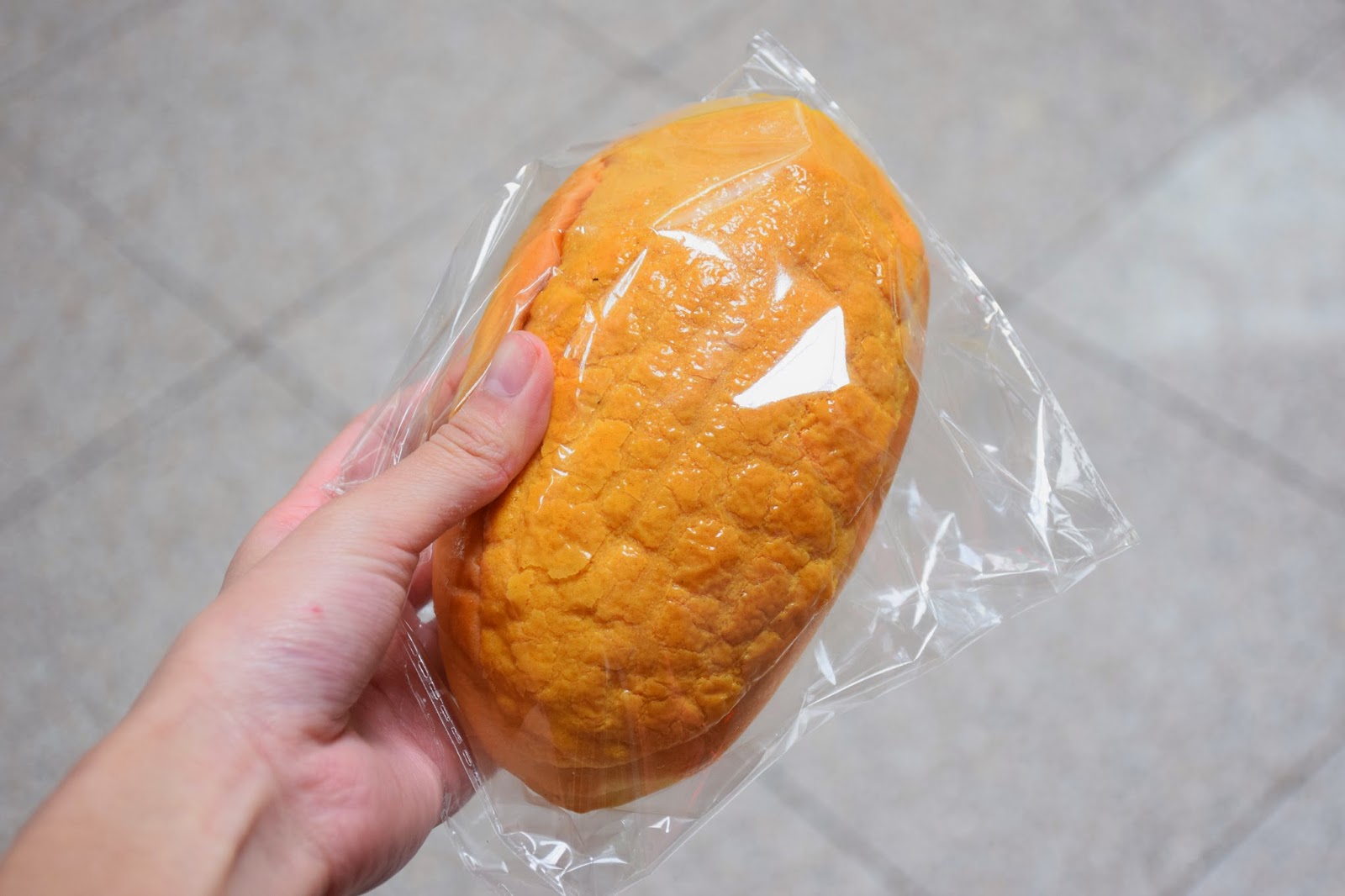 Pineapple Coconut Bun
3/5 stars
The shell was of a different variation, it was more smooth to the touch and wasn't flakey! The exterior shell was rather crispy and very fragrant. The coconut filling was mushy, sweet, and paired with the soft bread, it was lovely. 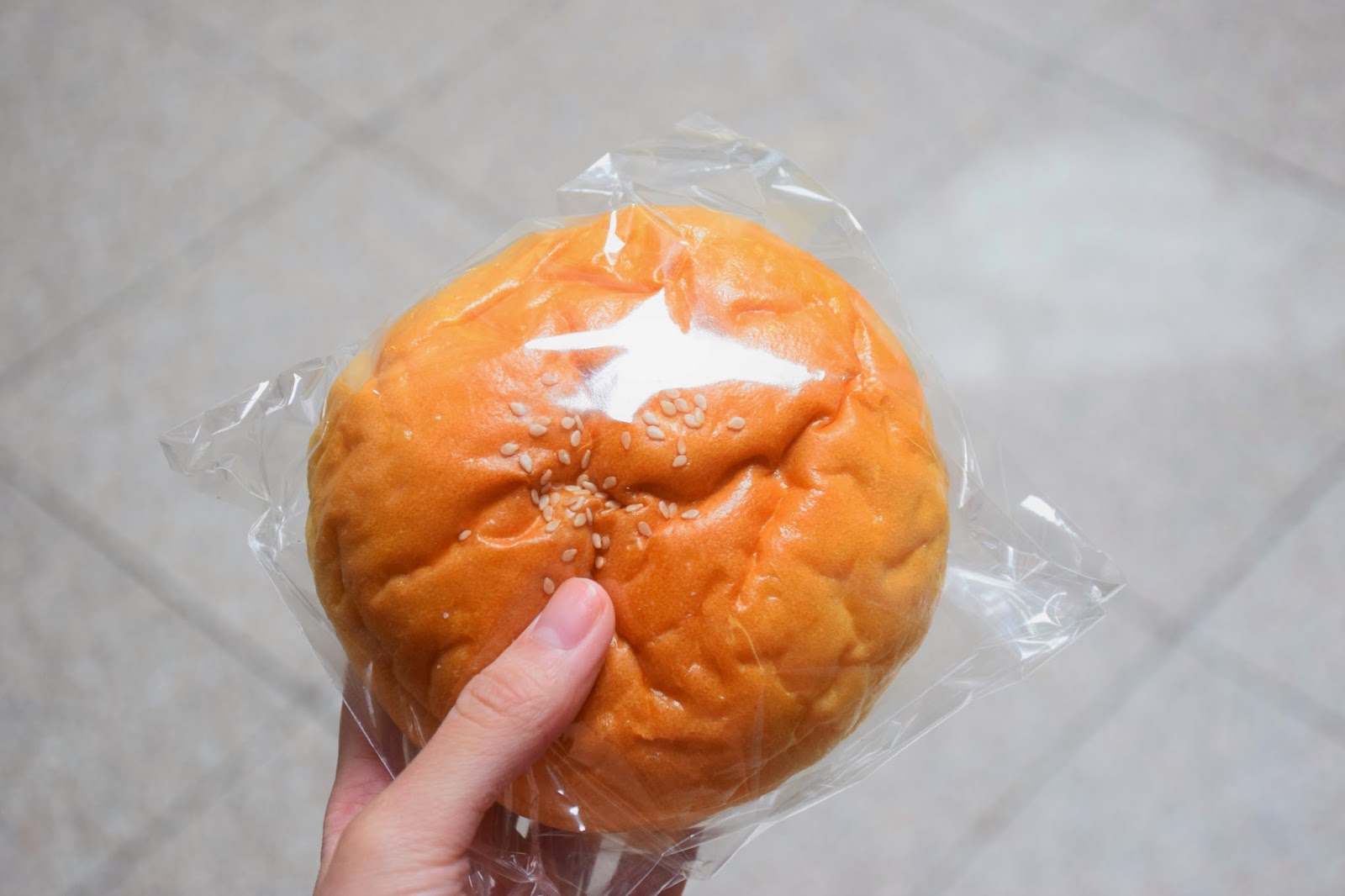 BBQ Pork Bun
2/5 stars
The bread was excellent, the same as the other pastries! The char siu filling was reasonably moist, with a blend of sweet and salty flavours. I would have to say it's definitely a notch above other BBQ buns from other bakeries, but still isn't up to dim sum quality haha. 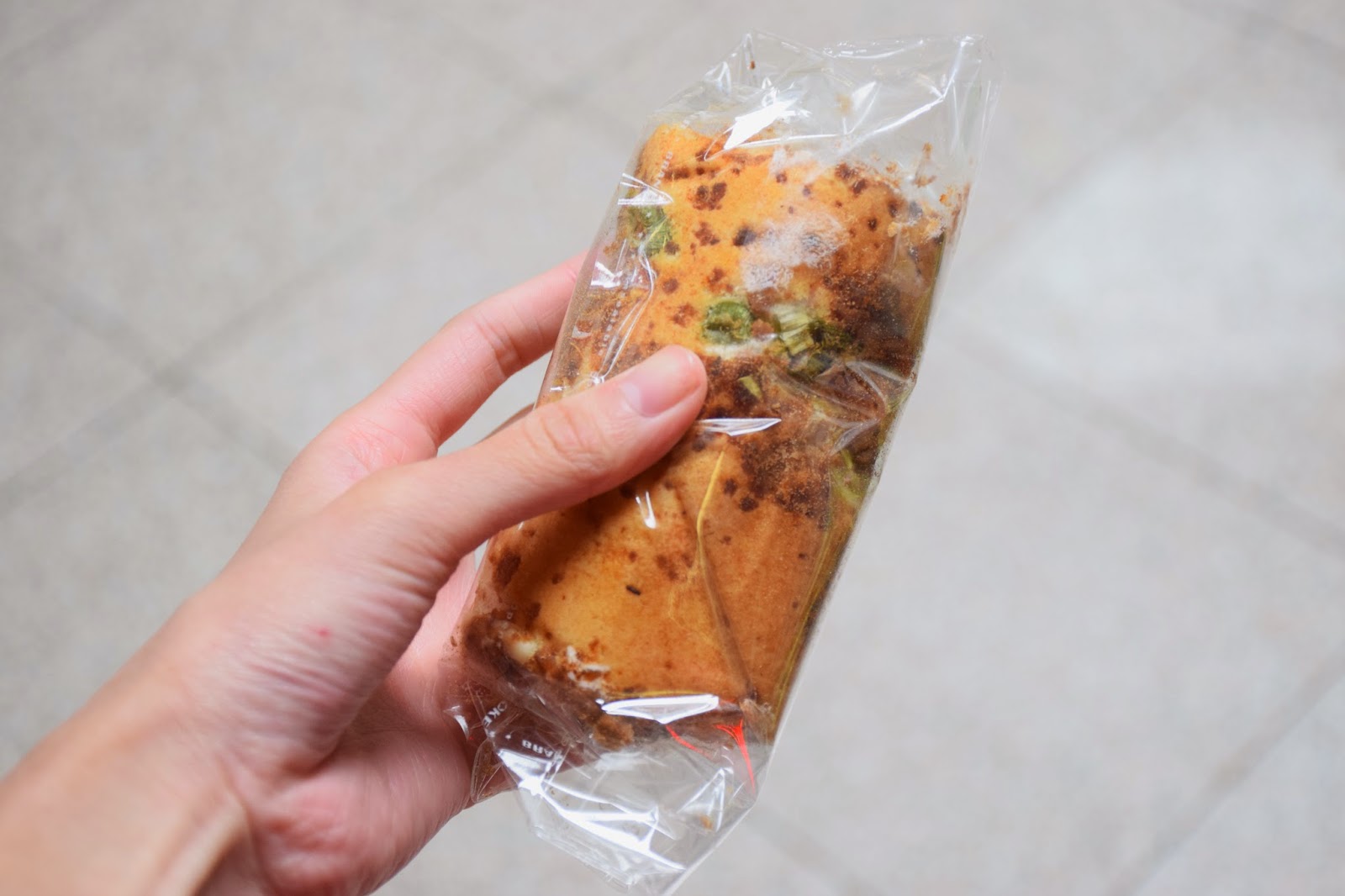 Egg & Pork Floss Cake Roll
4/5 stars
This was the second to last one they had, so I knew I had to try it! One way I pick foods to try is I observe which item has the least stock! It's usually a reliable tell tale sign of which item is the most popular! It usually works haha! This strategy proved to work in my favour, as this was my second favourite item out of the bunch, after the matcha cake!
This pastry was actually the texture of a swiss roll: super light, airy and moist! It was a great infusion of sweet and savoury flavours, the sweetness from the cream in the middle, and the savoury elements coming together from the pork floss and green onion! 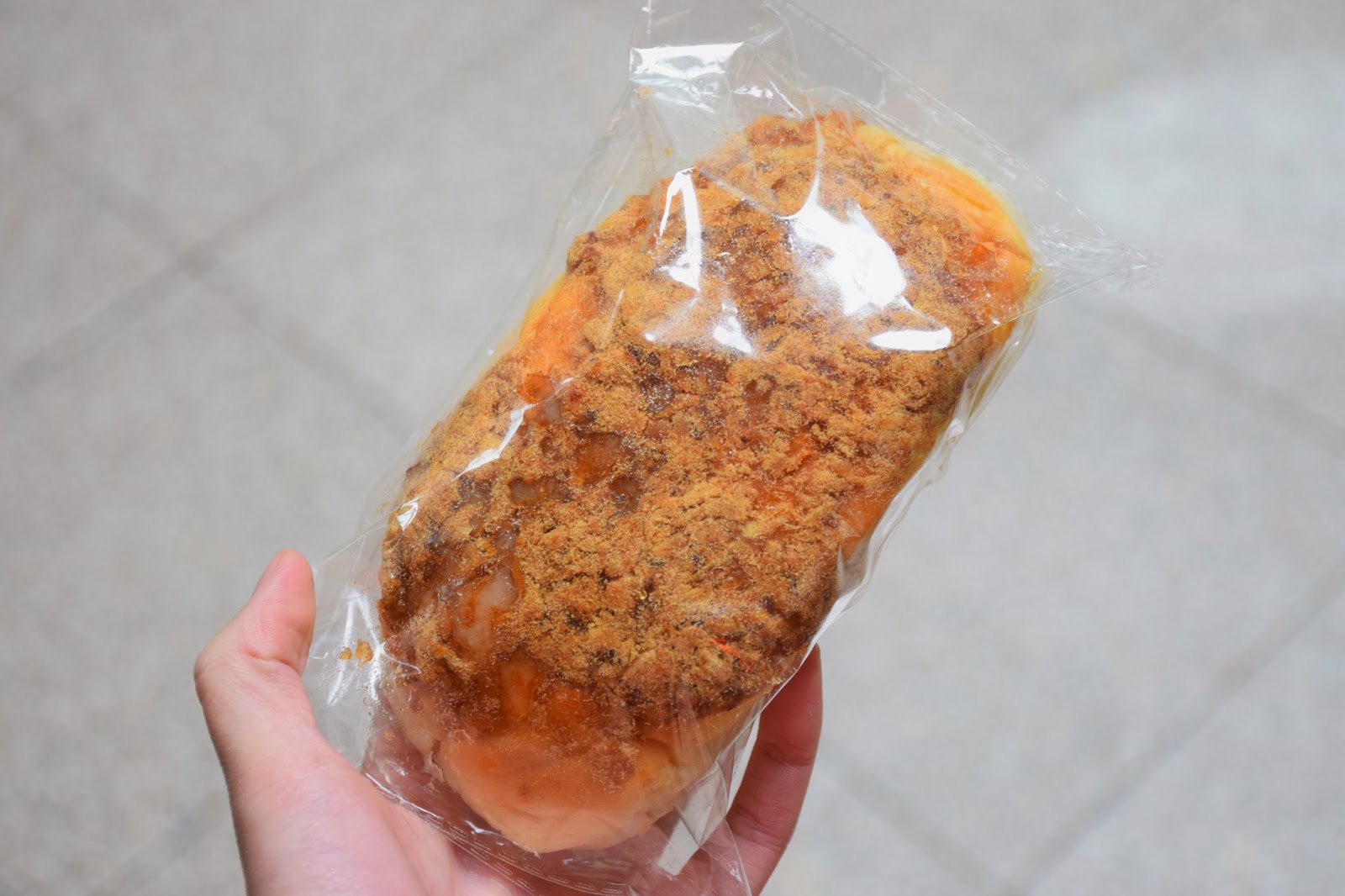 Dried Pork Floss Bun
3/5 stars
This trumps all the over dried pork floss pastries I've tried! The pork floss wasn't dry in texture and was really moist! As with the bread, it was the same as the other pastries, soft, moist and fluffy! 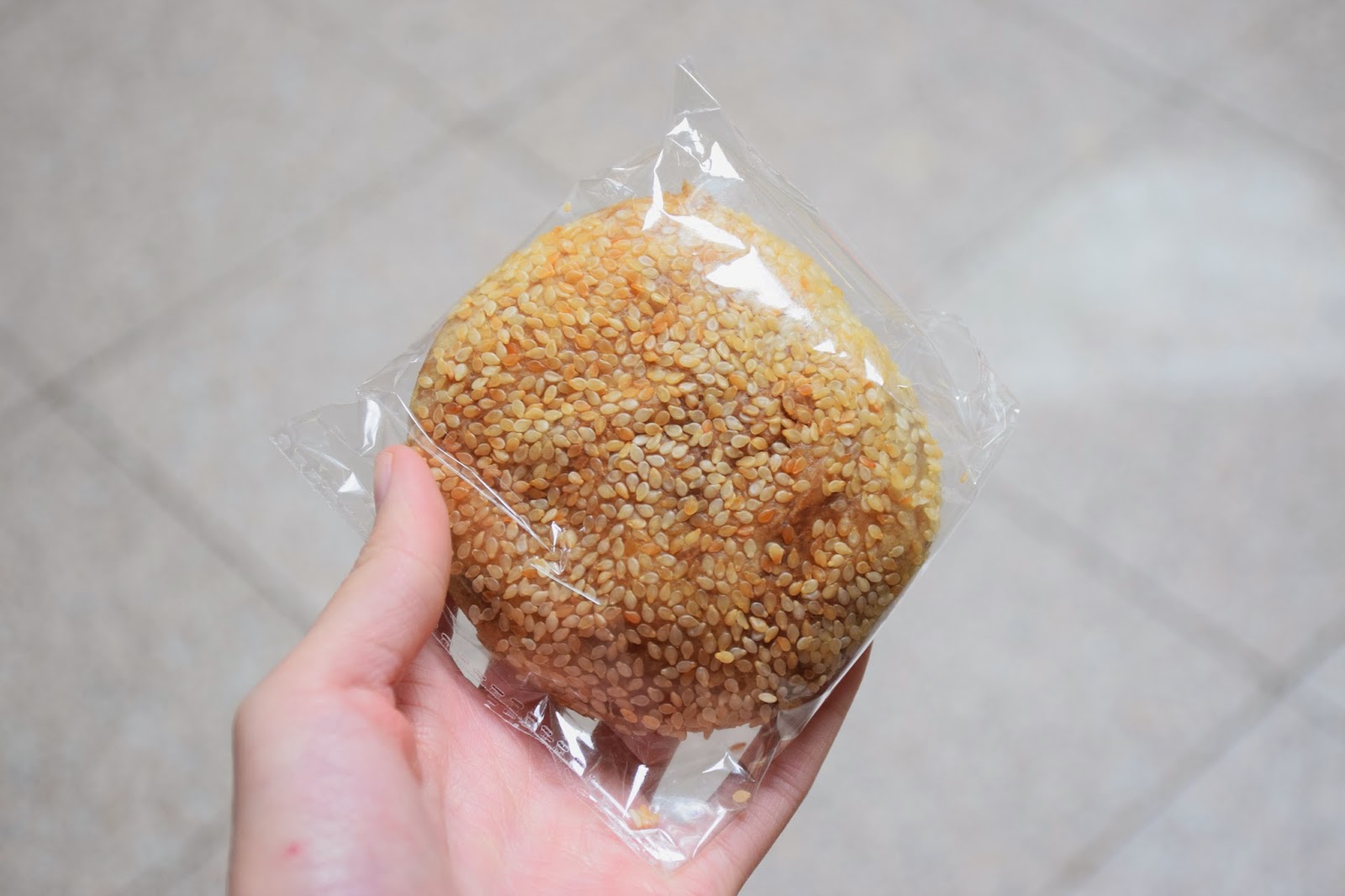 Sesame Shao Bing Pastry
3.5/5 stars
I was totally expecting this to be sweet, but it was actually salty! Since it was sesame flavoured, I was hoping it would be sweet...guess not haha! I guess I should've have known since it was labeled a shao bing haha! Shao bing is a savoury, flaky pastry from Taiwan, which is a popular breakfast item. There was no shortage of sesame seeds (as you can see from the picture) and the pastry was super flakey, with a ton of layers! The sesame seeds on the inside was grinded and intertwined between the layers of flakey pastry! 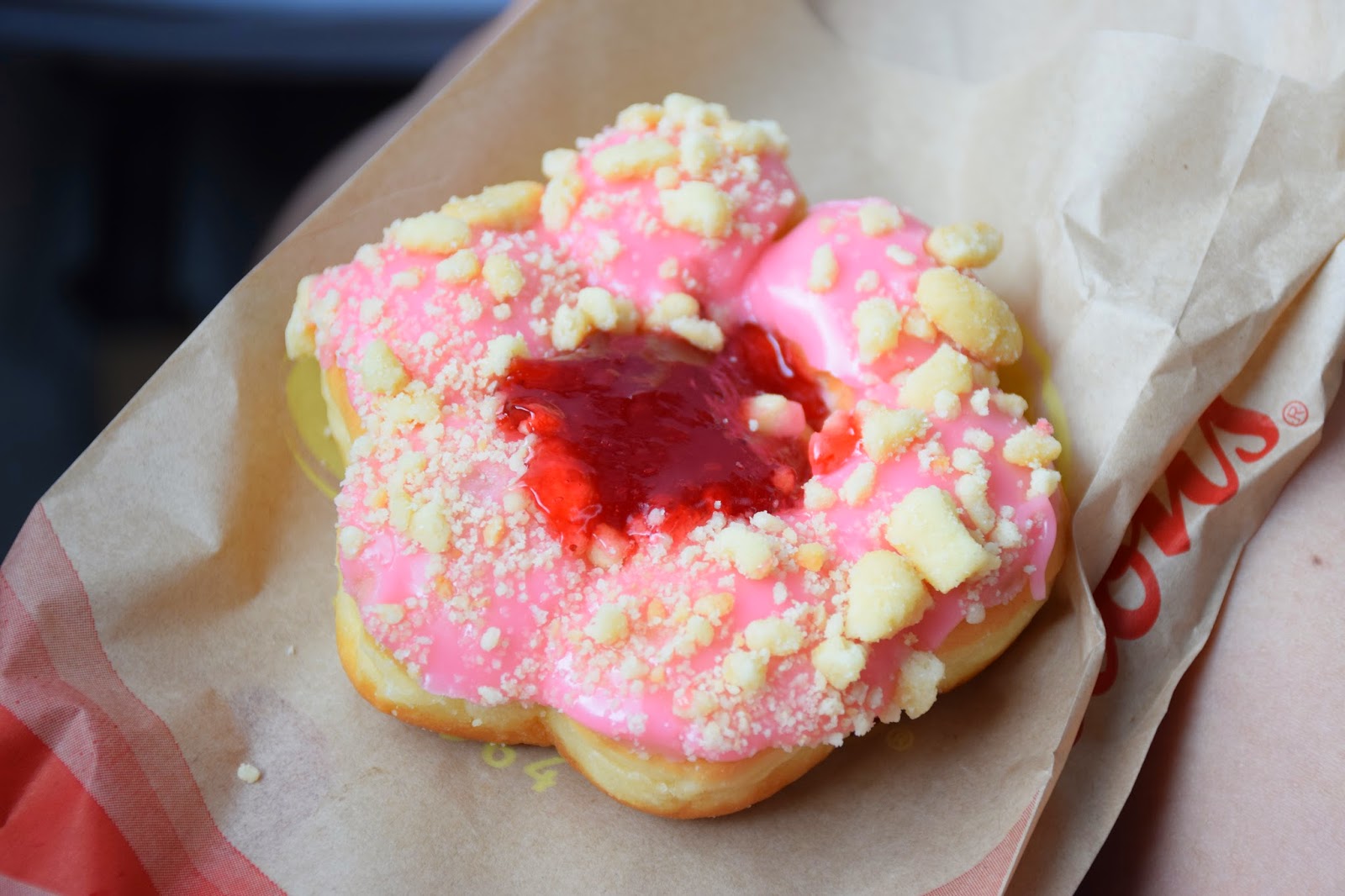 Strawberry Shortcake Donut
3/5 stars
On the subject of pastries, here's what I had for breakfast haha. So healthy right? Tim Horton's has just recently rolled out their line of strawberry pastries which includes strawberry shortcake muffins, timbits, donuts, even cookies! I actually really liked this surprisingly! It wasn't overwhelmingly sweet, and the strawberry jam in the middle was tart and tasted like real fruit! The bread crumbs added some much needed texture to the soft pastry, and complimented the soft doughnut nicely!

Actually this has enticed me into wanting to try more of their Strawberry shortcake line haha! Maybe I will, and I'll definitely review it! haha 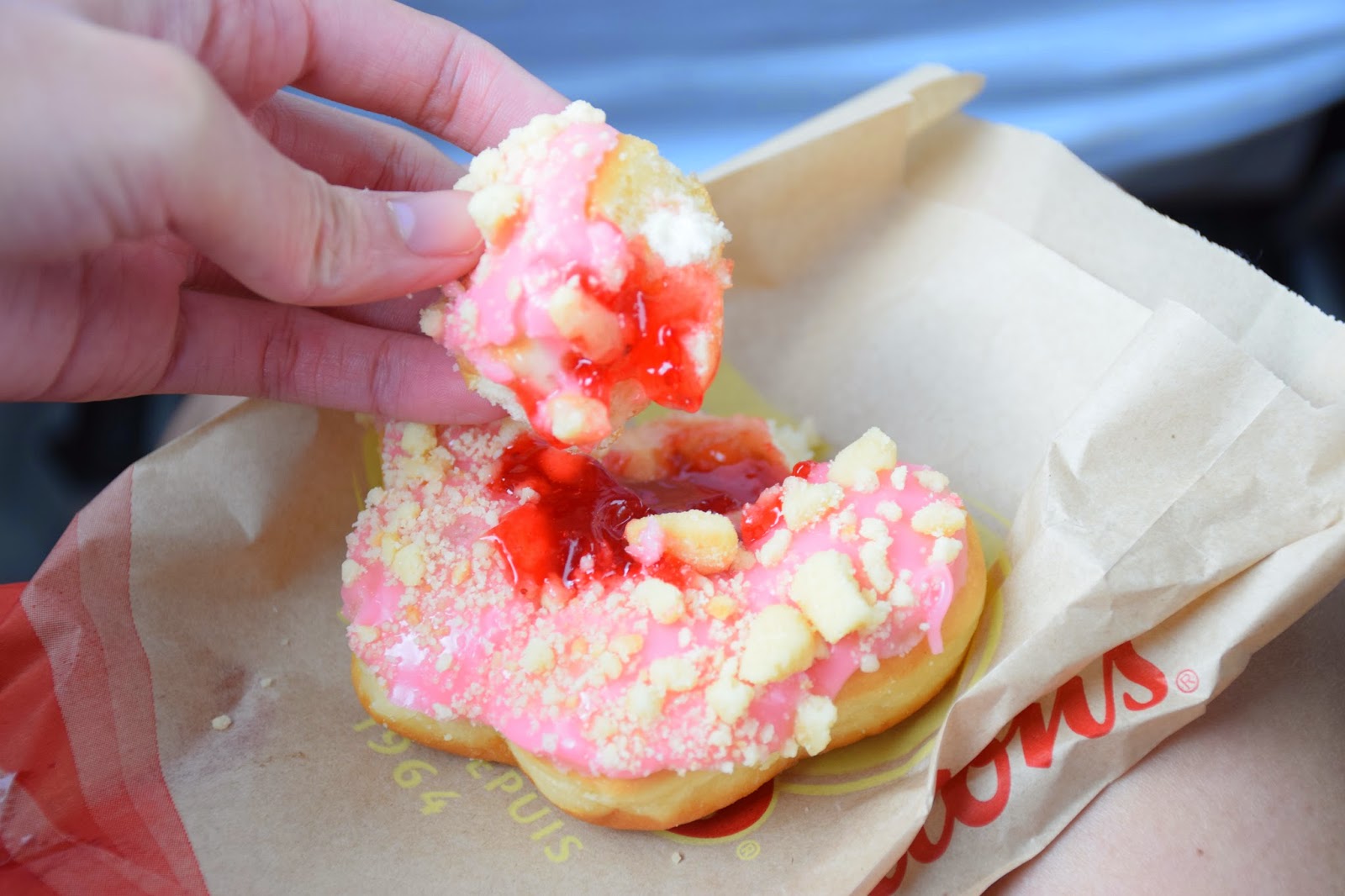 And here's how you eat a donut with jam the Canadian way hahaha ;) That way every piece gets jam on it! :D I actually found out through a Youtube vlog :P