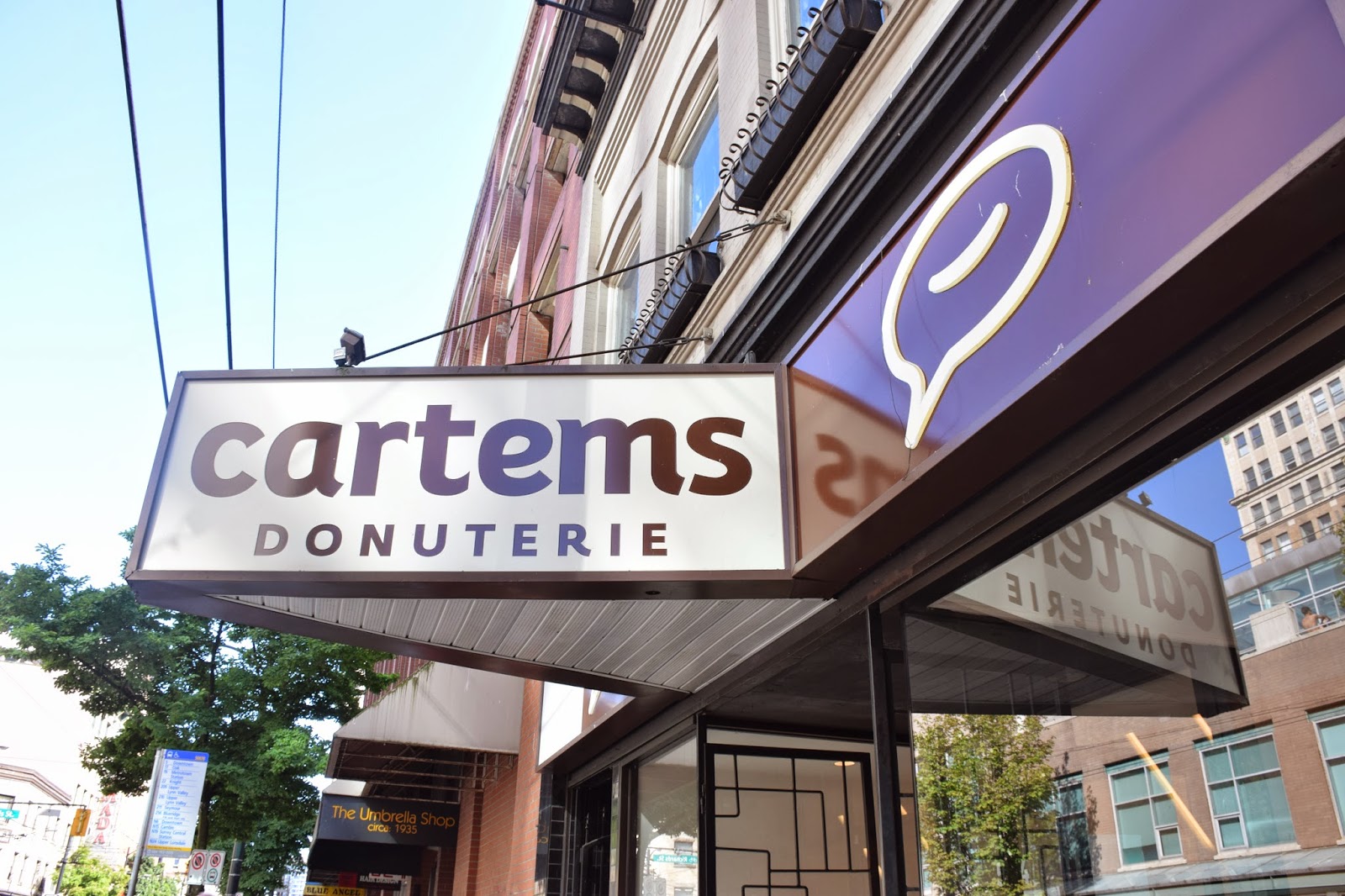 I never had a thing for doughnuts before I discovered the world of gourmet doughnuts haha! One of my favourite doughnut shops atm is Cartems! Looks like people are catching on to the hype because Cartems made it on to Urbanspoon's most popular list. They didn't solidify a place on that list for nothing, Cartems is just on another level, and puts every other donuterie to shame haha! Sorry Timmy's and Lucky's, that means you :P

Just wondering, do you type donuts or doughnuts? Americans say (or rather spell) "donut", while we Canadians, and the Brits, spell "doughnut!" Personally, I think Donut would be such a cute name for a pet hehe! More so than Doughnut, don't you agree? ;)

Oh, and if you've ever been to Cartems, have you guys noticed that one of the guys working there looks EXACTLY, and I mean exactly, like (the character) Dean Pelton from Community (which is one of my favourite shows btw, I've watched every episode of every season hehe.) Someone mentioned it in a Yelp review and they were totally right haha! 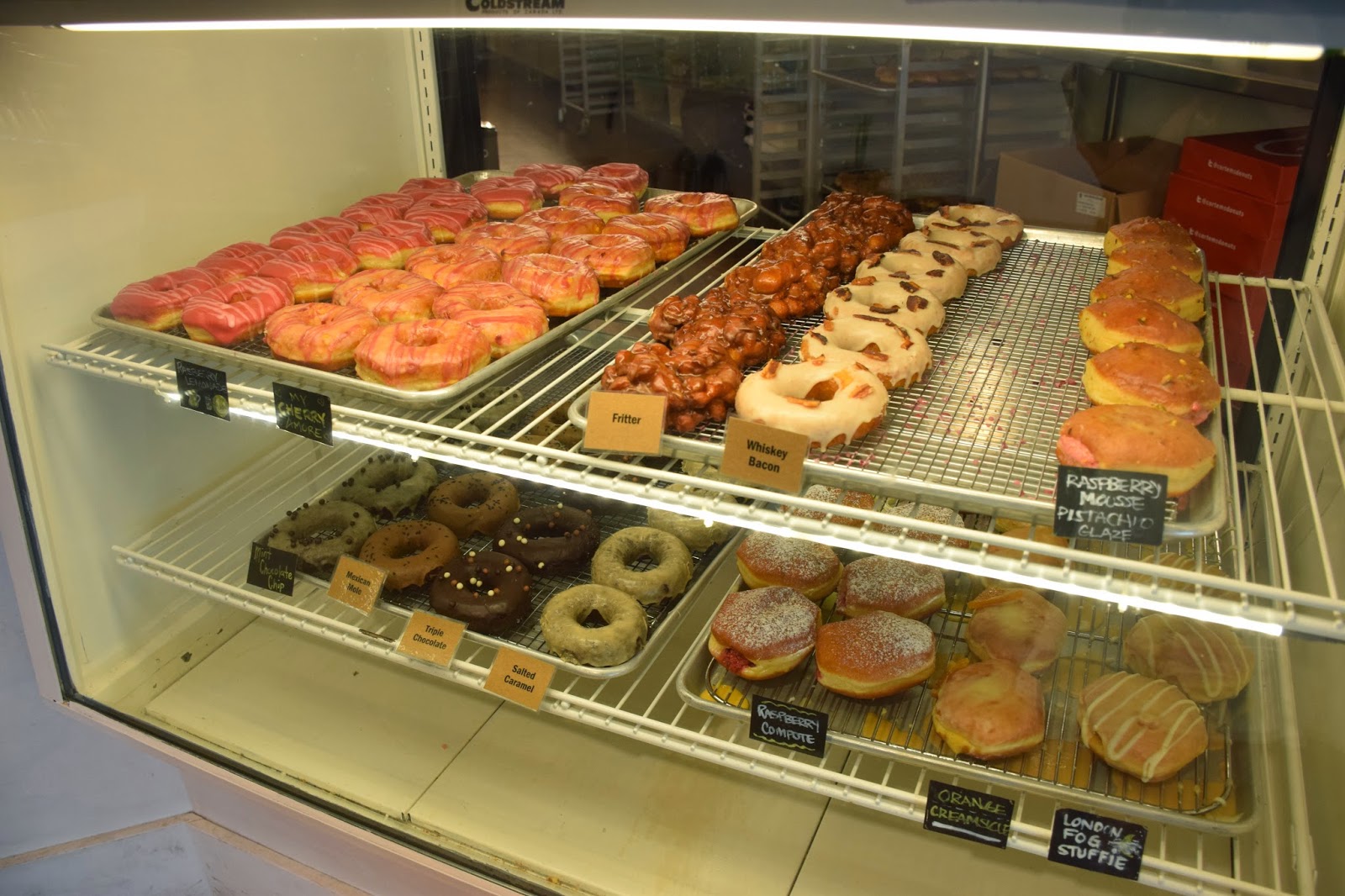 (Click to Enlarge) Here's a look at some of their flavours! They also have seasonal and limited edition flavours! 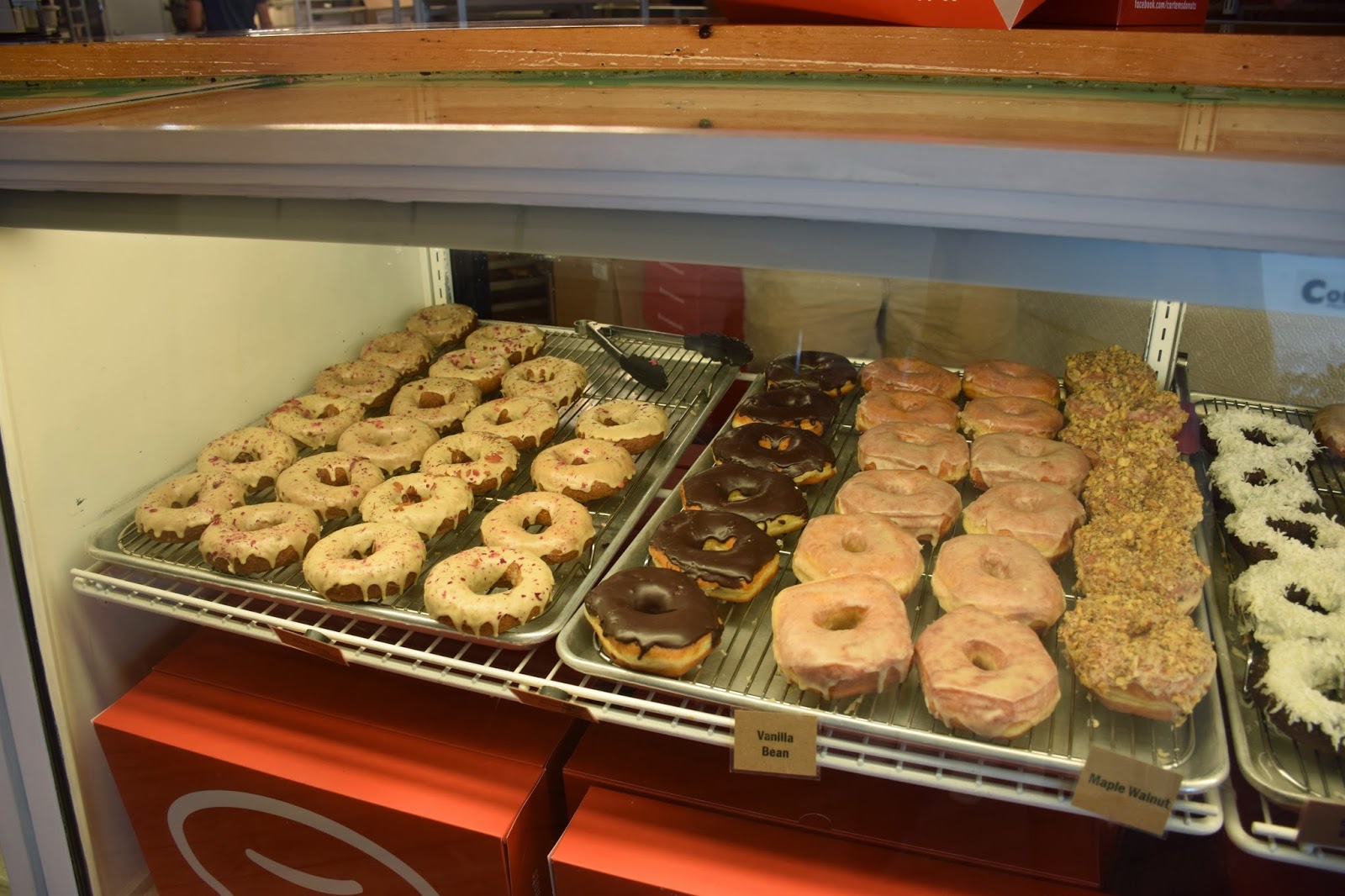 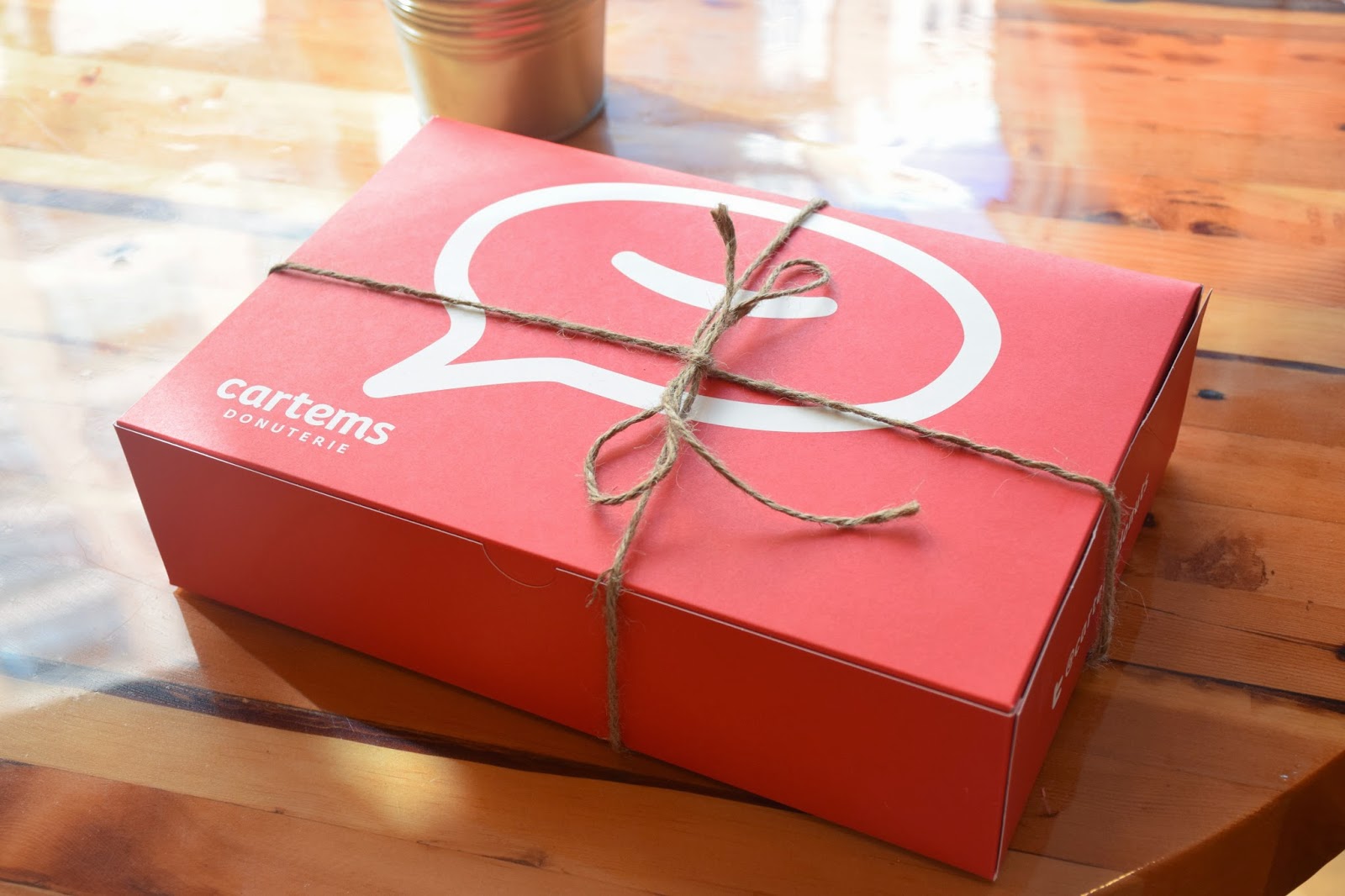 Wow, pretty hipster packaging, wouldn't you agree? Totally up my alley though, love the string!! ;D 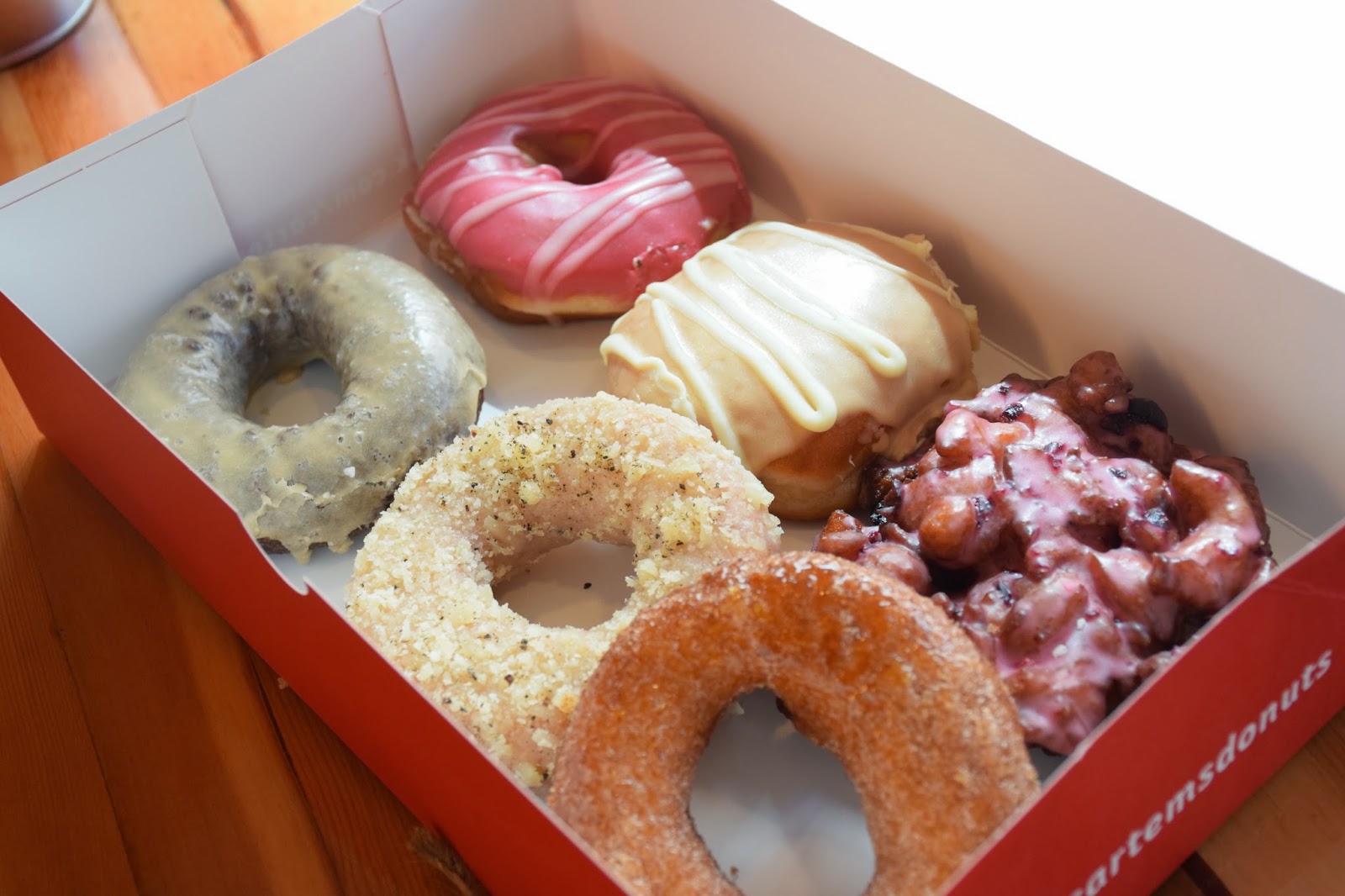 Here they are: in all their gloryyy!! These are only 6 of the 14 I'm going to show you! 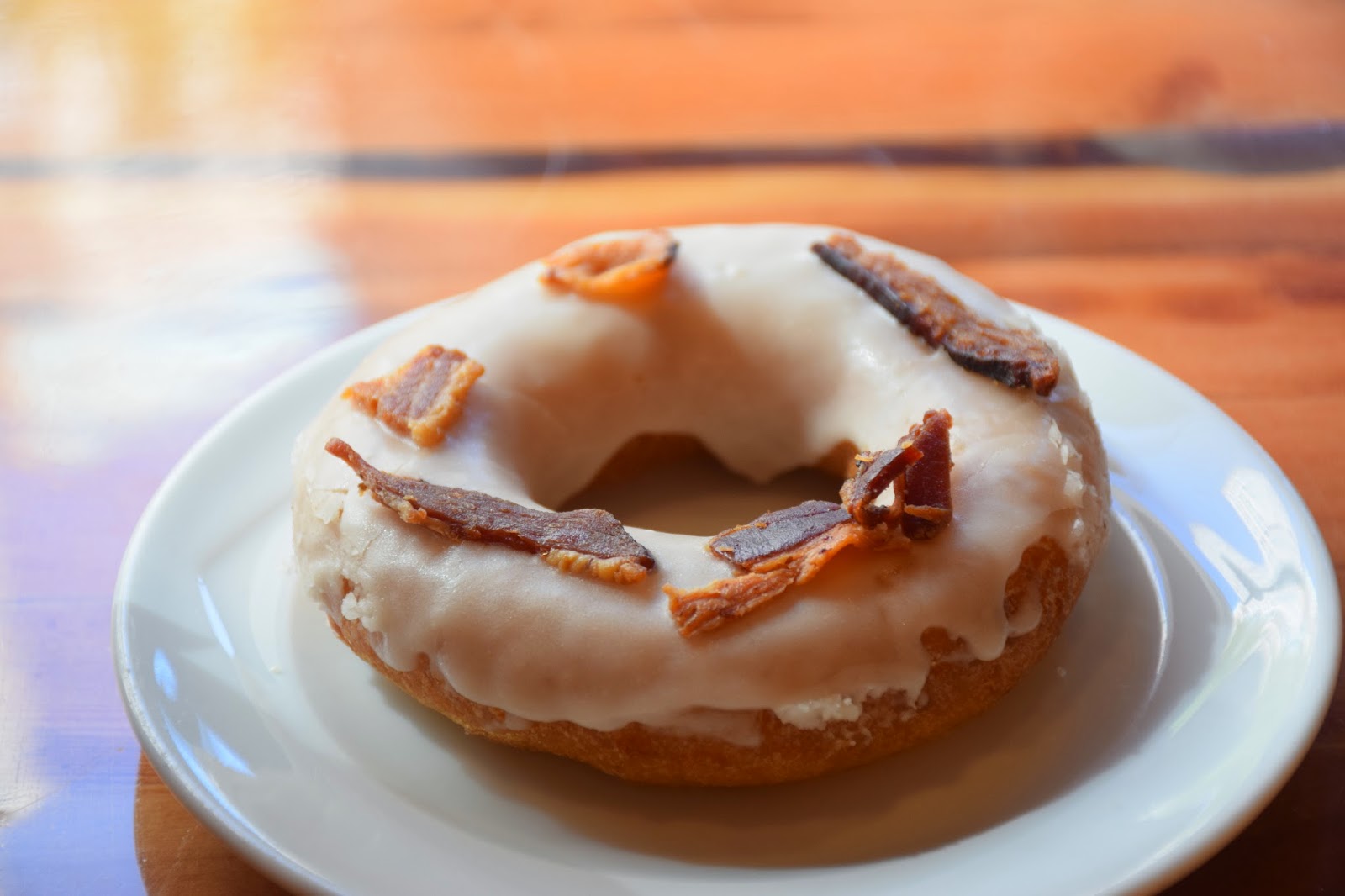 Whiskey Bacon
4.5/5 stars
This is the doughnut they're known for! That (and their Earl Grey of course: below!) It's just as awesome as it sounds!! Whiskey + bacon, how can you go wrong?! I've actually never had whiskey before, soooo, I don't really know what whiskey tastes like, but I've sure had my fair share of bacon haha! The bacon was crispy and had smokey, charred flavour, which went incredibly well with the sweetness of the doughnut! I'm just a total sucker for sweet and savoury combinations haha!

There another thing about Cartem's doughnuts: they're usually incredibly moist and soft (which the exception of the fritter and old doughnuts!) They're never chalky, dry or dense (which is a personal pet peeve of mine!) 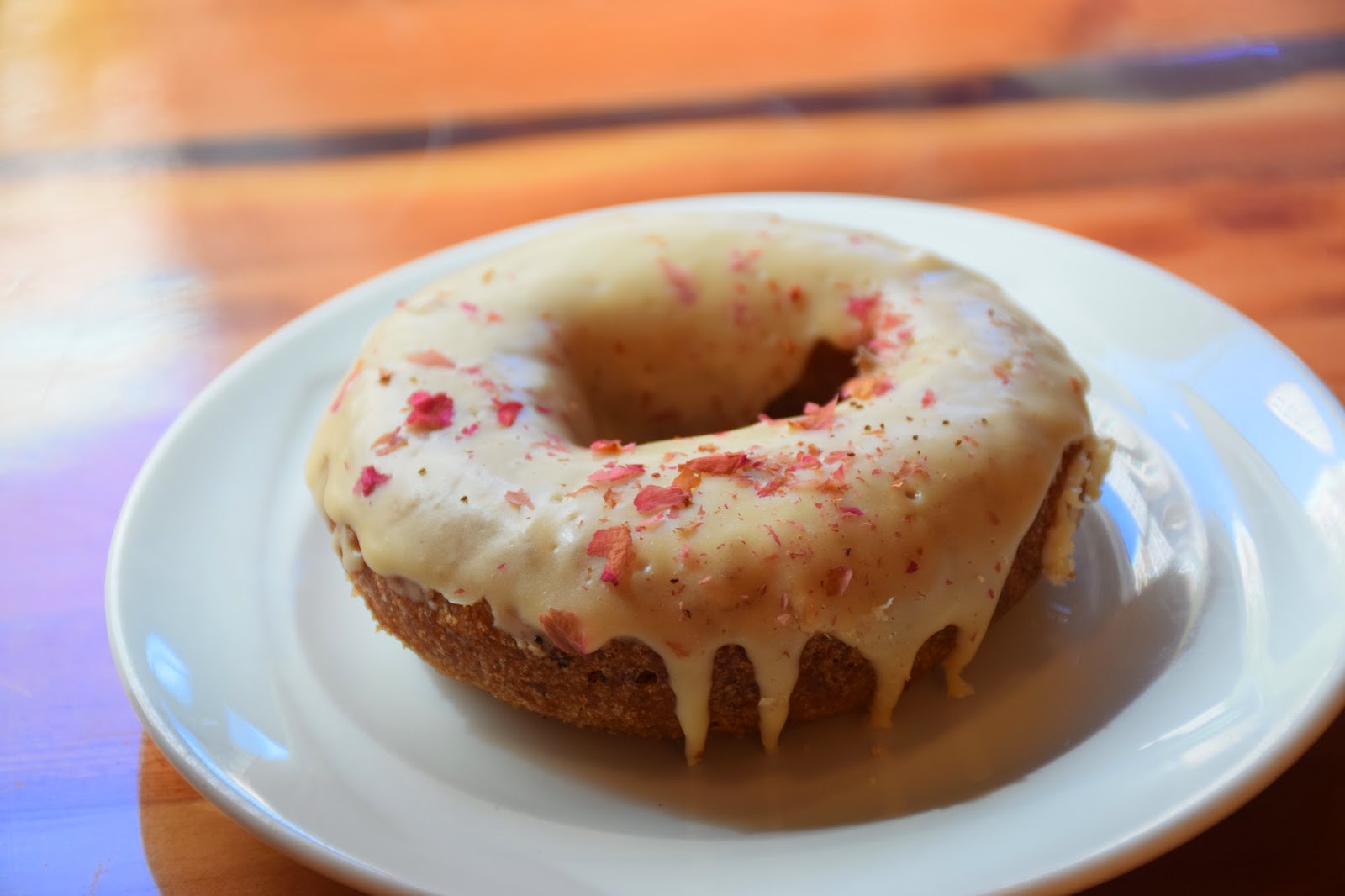 Earl Grey
4/5 stars
They also have this in a vegan/gluten free version, so have no fear all you vegans/vegetarians/gluten sensitive peeps! You can join in on the fun to! The doughnut itself is dusted with a a garnish of some sort, which resembles petals! It really did taste like earl grey! The tea element was very strong, and went perfectly with the icing. 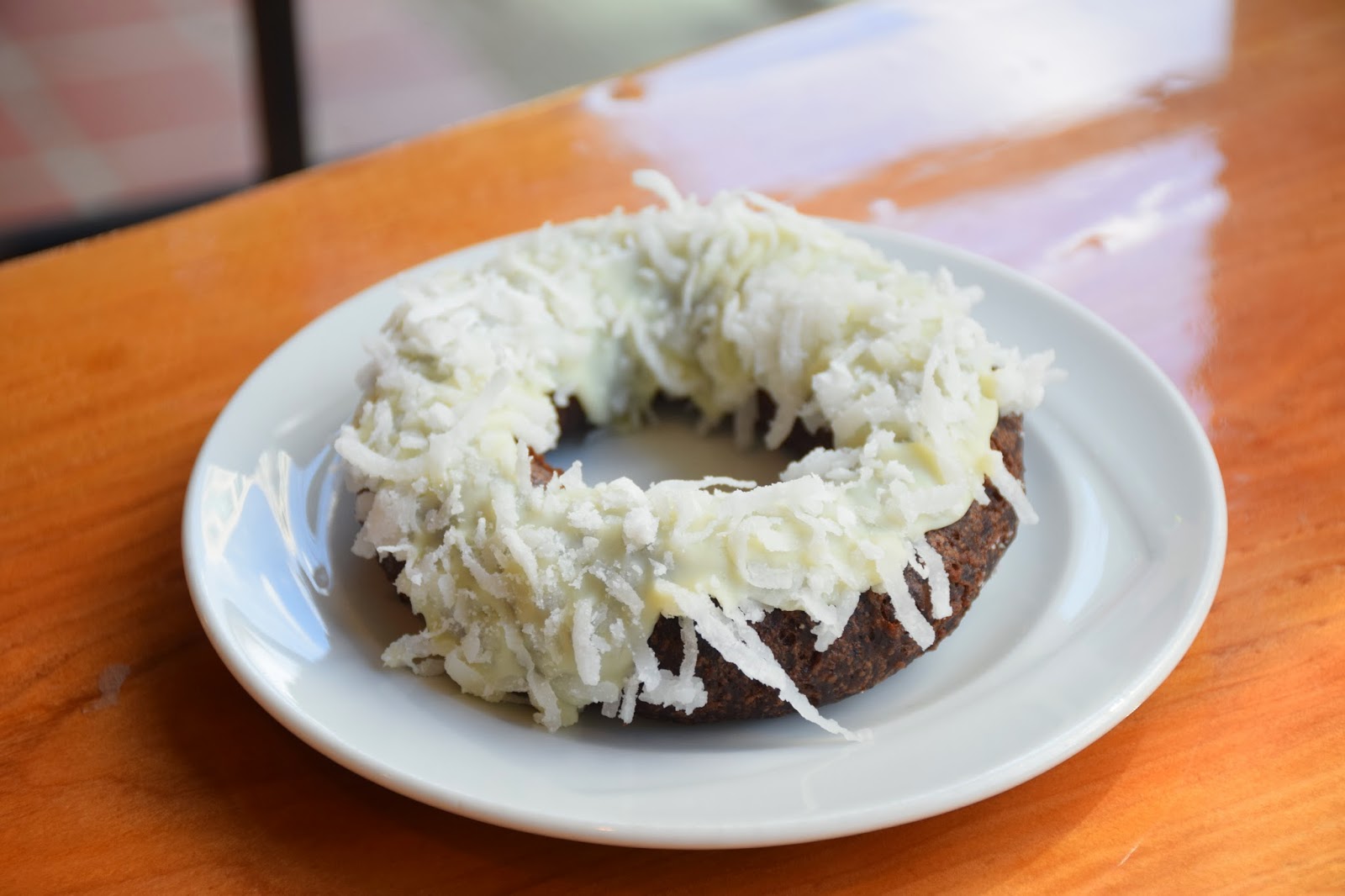 Sweet Snow
2/5 stars
This is another one of their popular flavours, layered with sweet coconut flakes! I'm a huge fan of coconut, but wasn't that fond of this haha. The chocolate donut was a bit dry and doughy, probably due to the chocolate. I find that with chocolate donuts, they tend to be on the drier side. 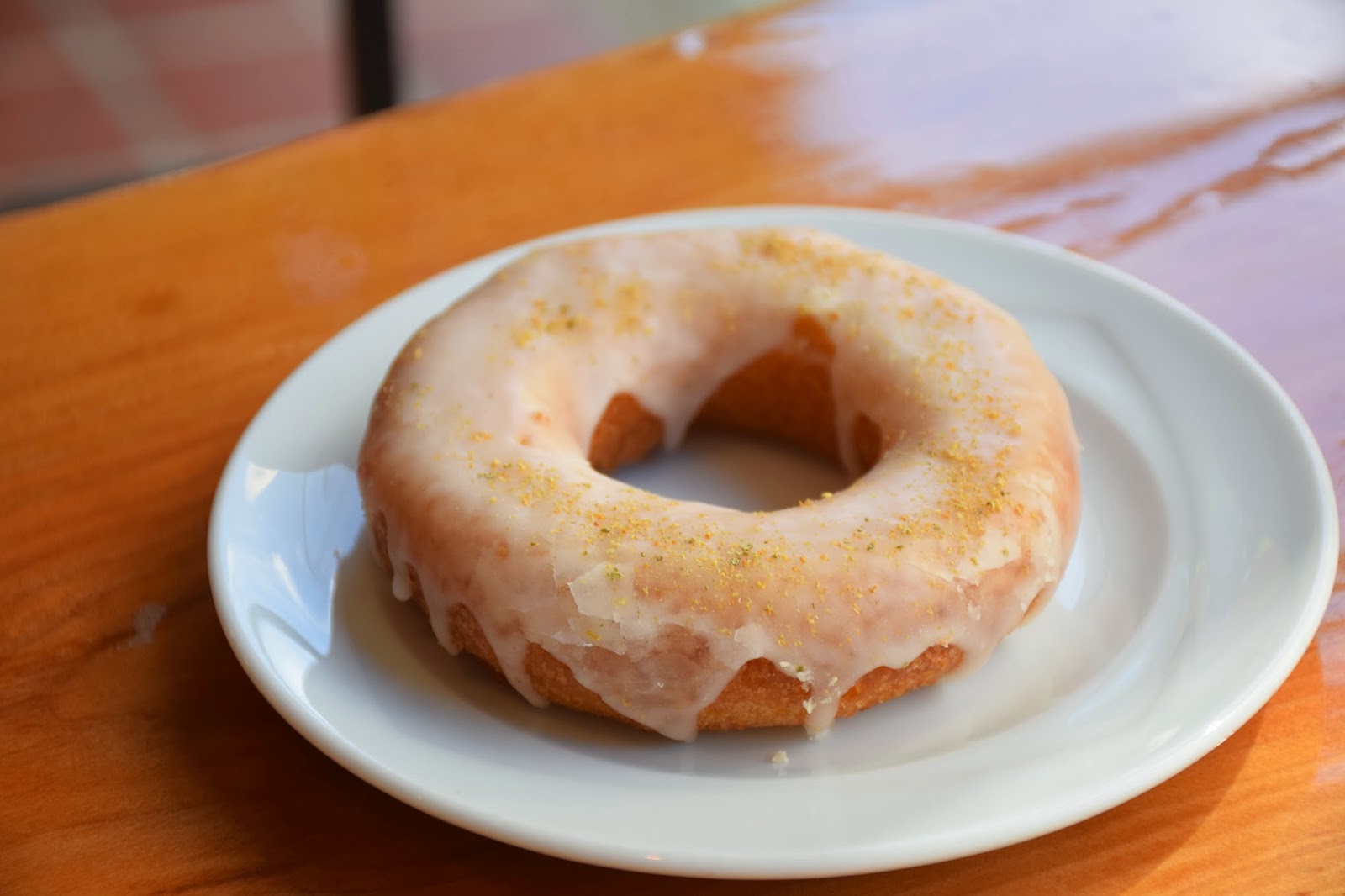 Citrus Dust
4/5 stars
If you're a fan of anything citrus, you'll love this! Biting in, you get a burst of tangy lemon and orange! Combined with the sweet, pillowy doughnut, this flavour is a definite winner! Oh and hey mom, I'm eating my fruit & veggies ;) 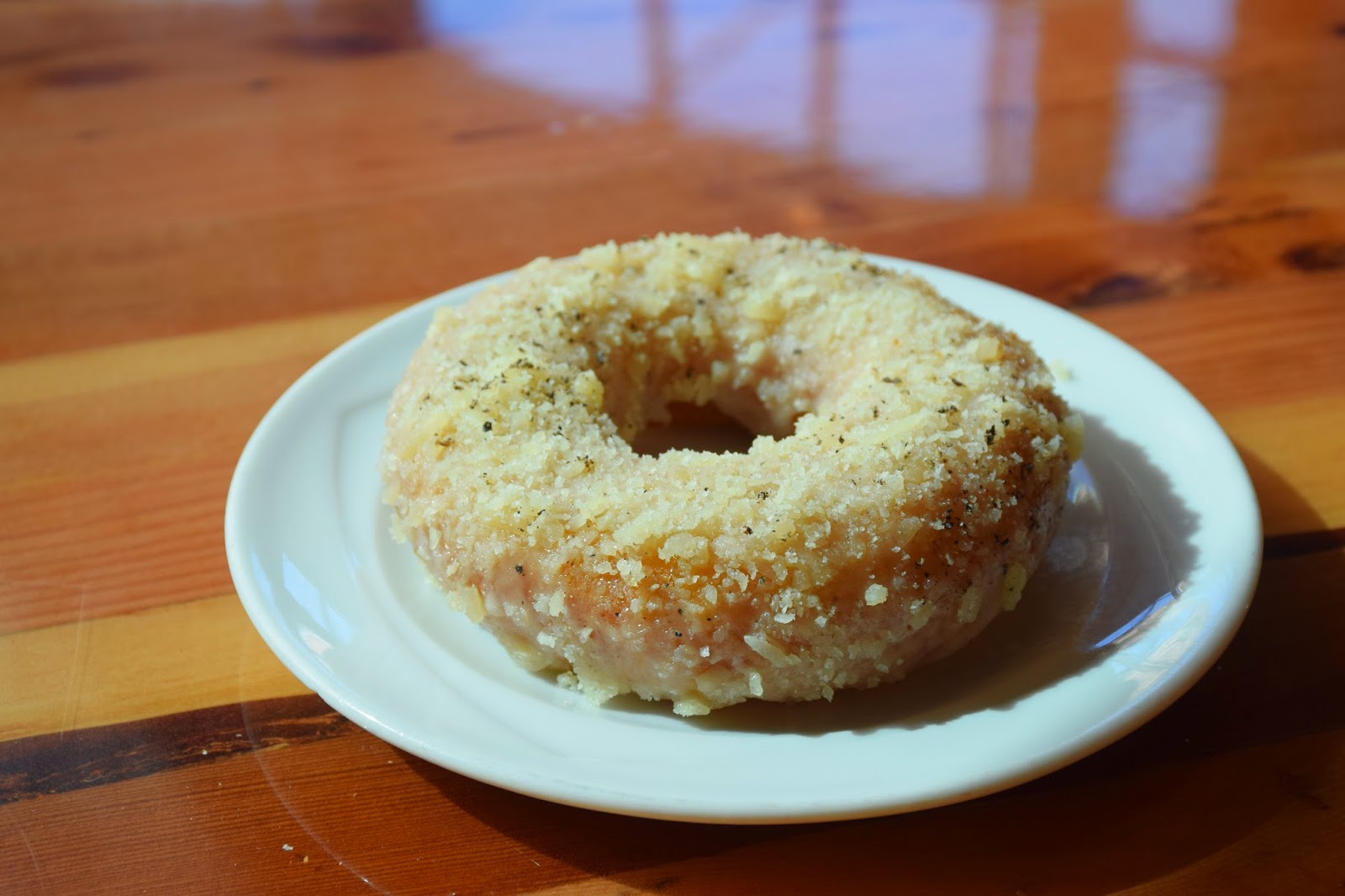 Bee Sting (Honey Parmesan)
5/5 stars
THIS WAS GLORIOUSSS. This, my friends, is the epitome of donut perfection. Cheese + sugary dough, how can you go wrong?!! Ahh, my saliva glands are already flowing just thinking about it haha! The cheese flavour was super potent, and the savoury flavours paired incredibly well with the sweet donut. The crumbs on top added an extra layer of dimension that just tickled my senses! 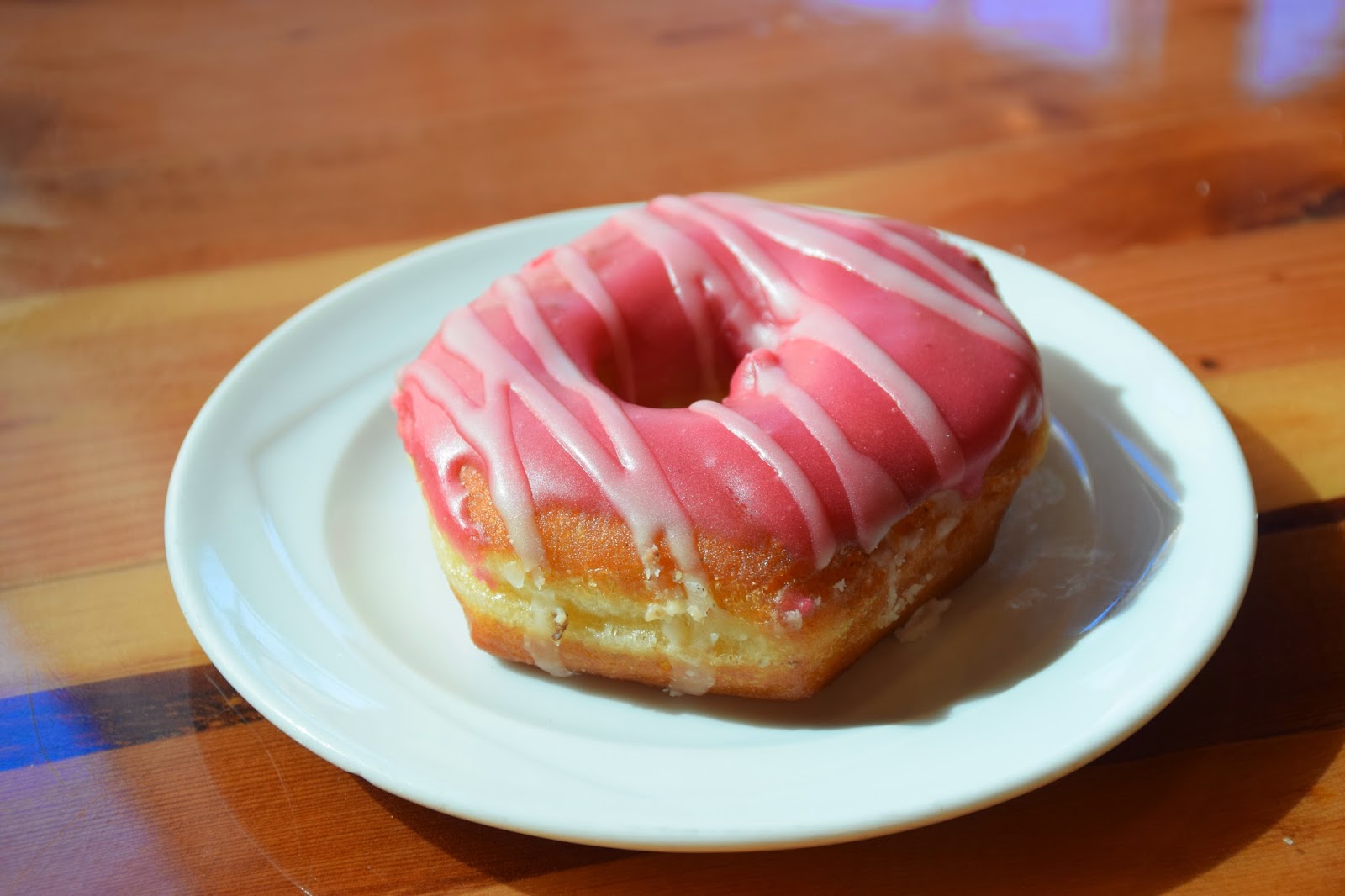 Raspberry Lemonade
2/5 stars
There was a definite raspberry note, and an undertone of sourness due to the "lemonade" element. The sugar drizzle helped add some extra sweetness to the doughnut. They also have another raspberry flavour: Raspberry Mousse Pistachio Glaze (which unfortunately I didn't get to try because I'm allergic to pistachios.) 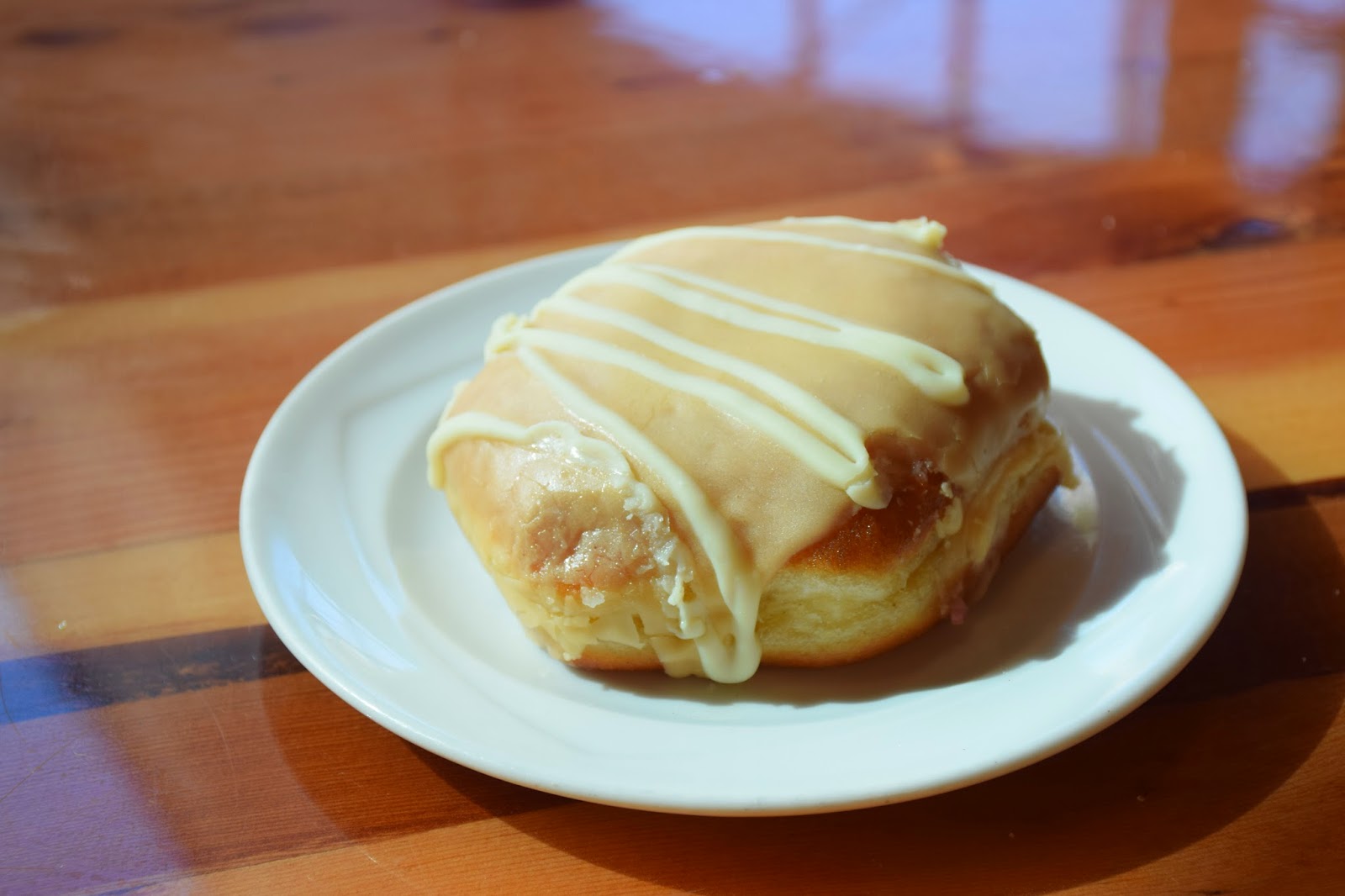 London Fog Stuffie
4.5/5 stars
Man, Cartems is really hitting the ball out of the park with these flavours!! This was ah-mazing! If you've ever had London Fog tea, this tastes exactly like it! The filling super creamy, grey in colour, with speckles of black dots! The layer of cream on top just added that extra "omph" which made the doughnut just that much better! Another one of my favourites! 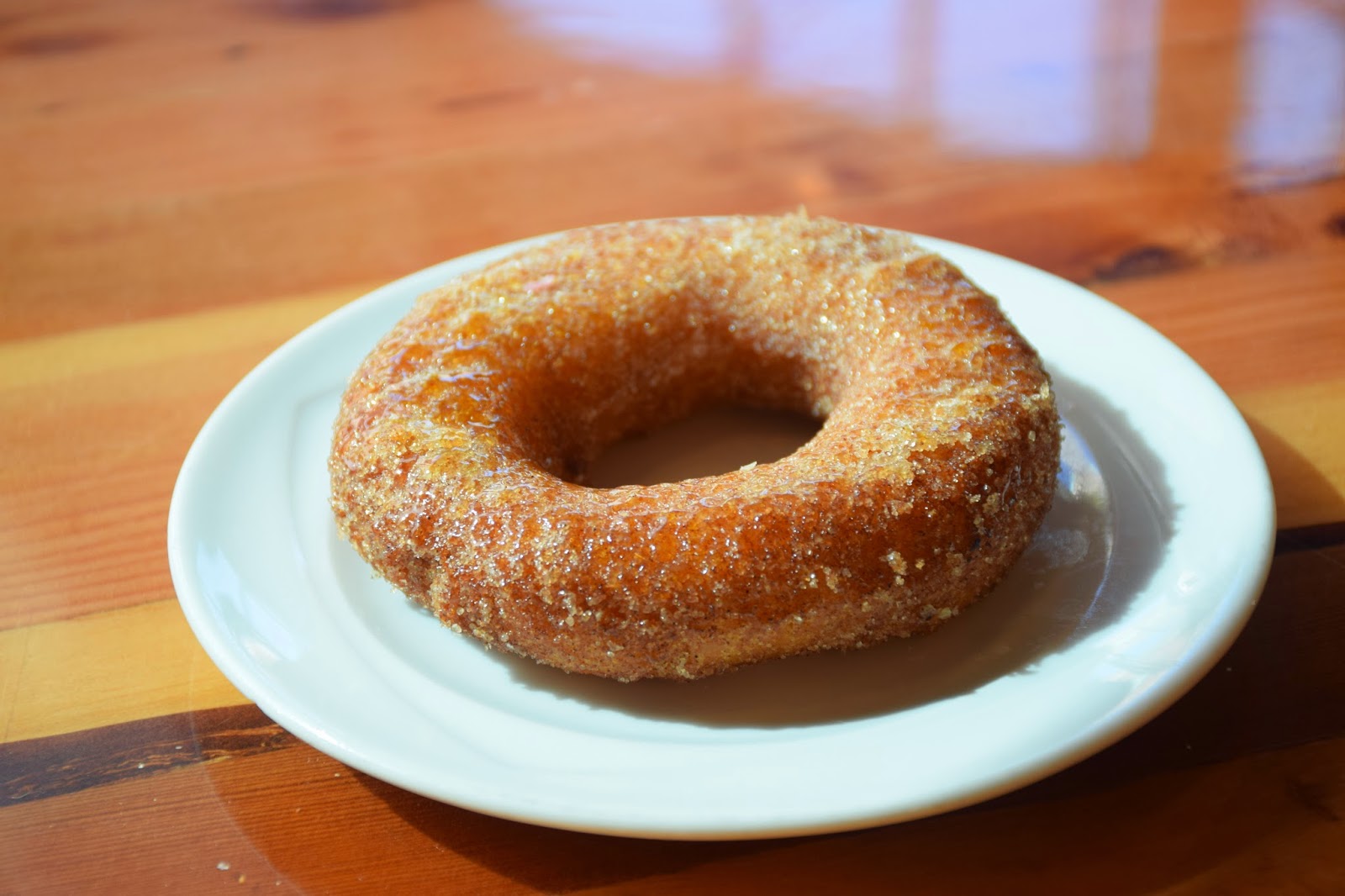 Cinnamon Brulee
3/5 stars
This was one of the sweetest doughnuts of the bunch, due to it being dusted with granulated sugar! It tasted like a cinnamon bun, but way better! The cinnamon element was definitely really strong, with a potent buttery flavour! 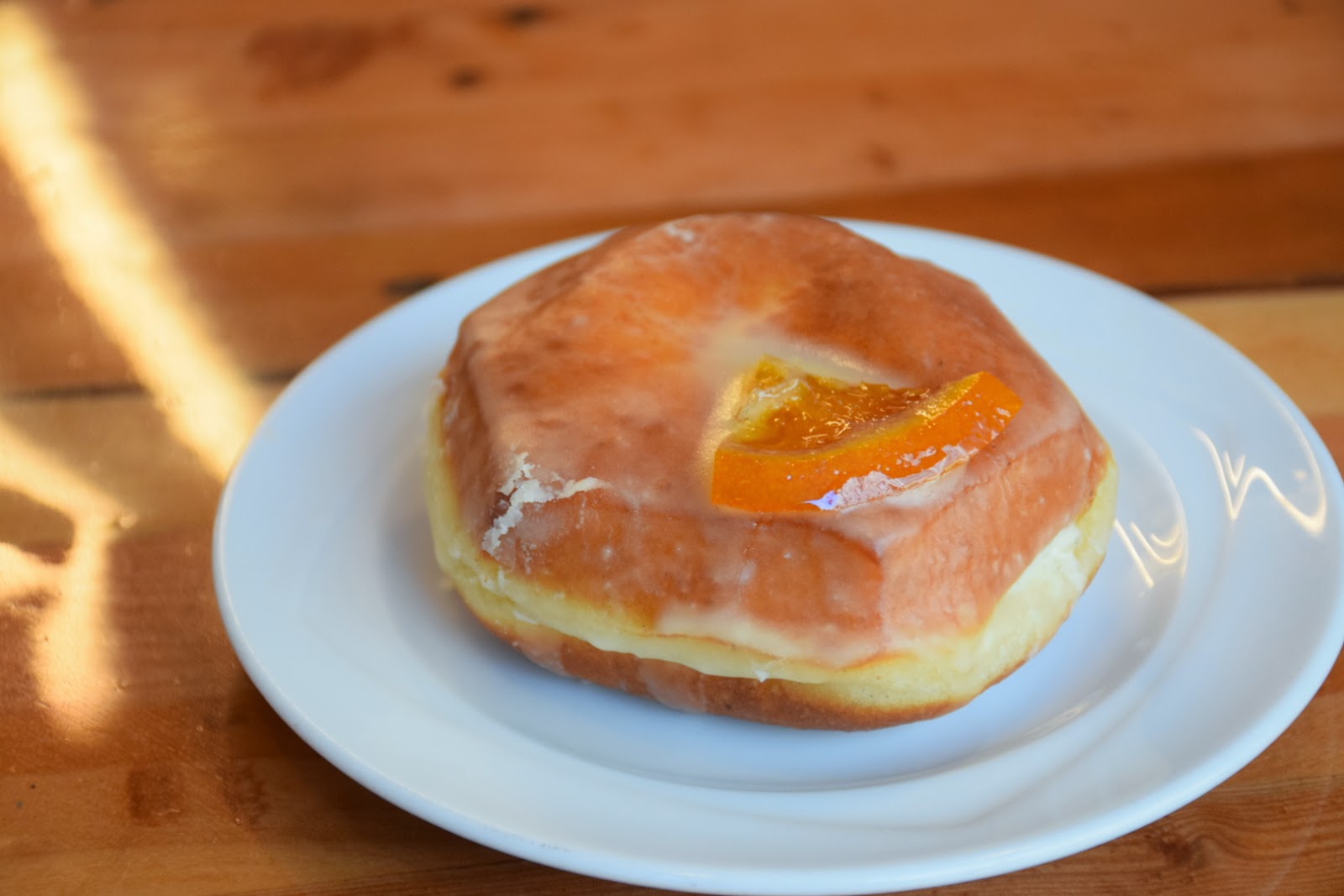 Orange Creamsicle
4/5 stars
This was another one of my favourites! The doughnut was filled with a sweet, creamy filling! It really did taste like an orange creamsicle haha! The cream was super thick and had a delightful citrusty zing to it! The doughnut itself was coated in a sugary glaze and decorated with a piece of orange glazed in sugar! 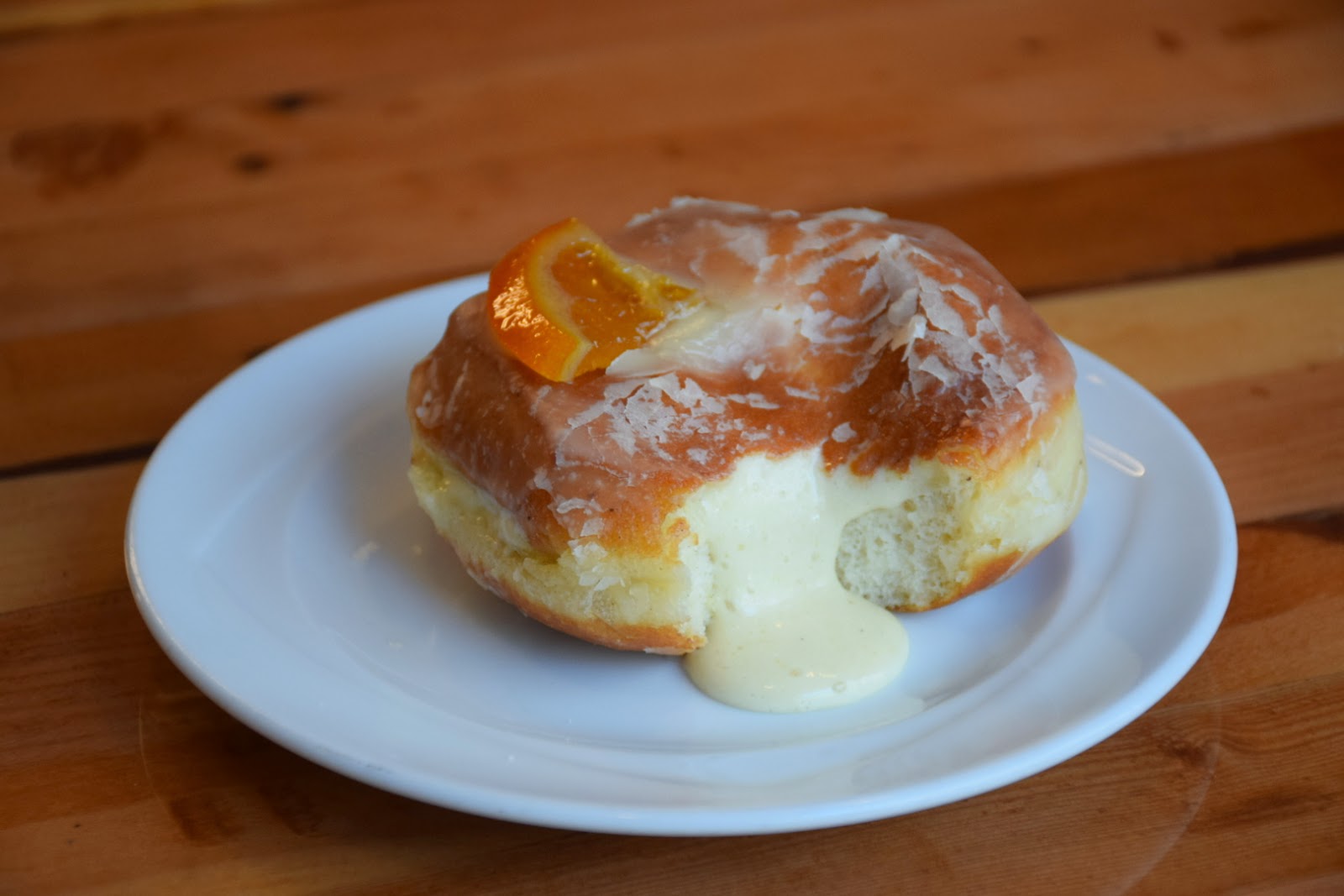 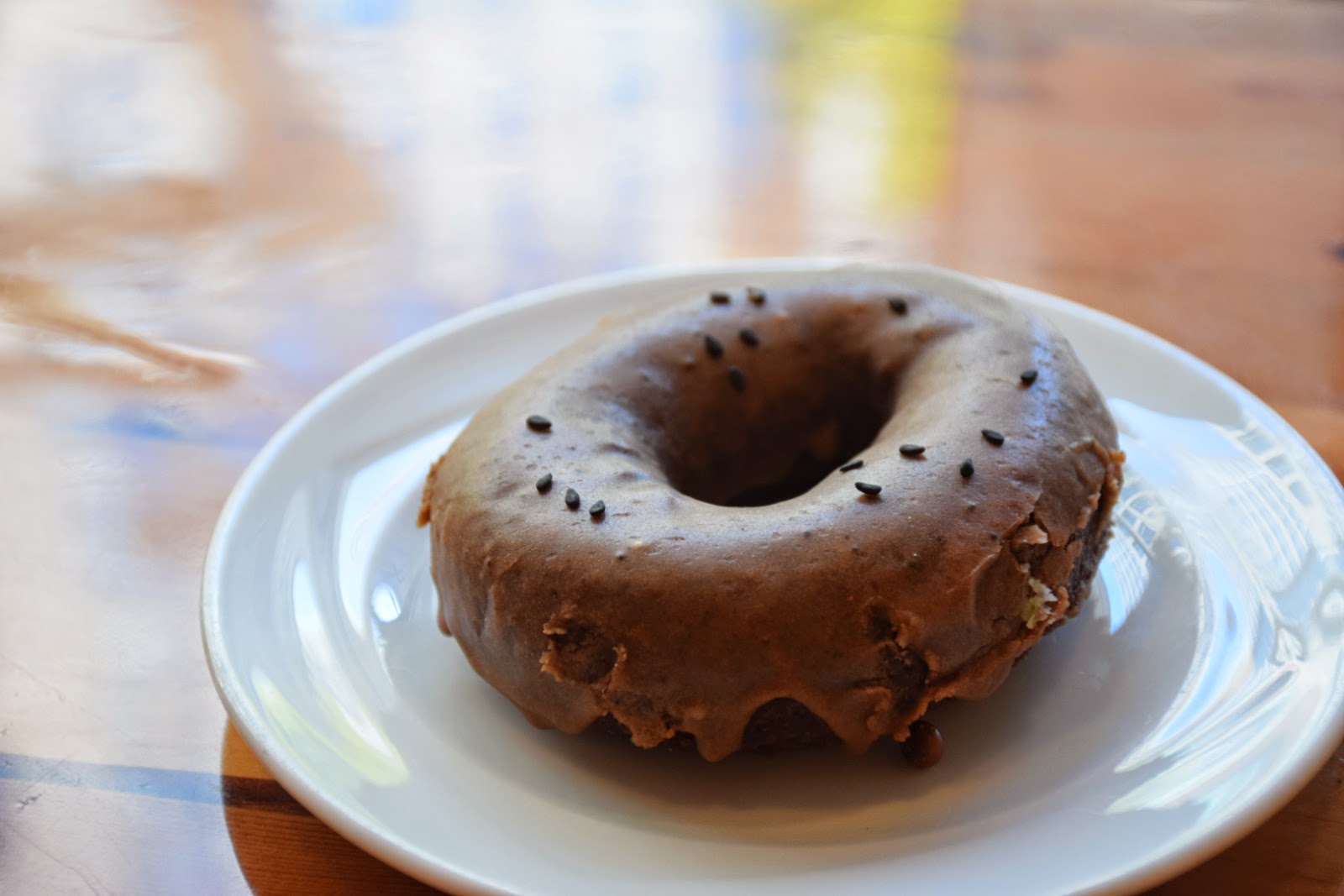 Mexican Mole
4/5 stars
The nice girl working there informed me that this was her favourite so I decided to try it! I wasn't dissapointed! It definitely was the most unique out of the bunch and unlike any doughnut I've ever tasted! On their website it describes the Mexican Mole as "Four kinds of chilis, cumin, coriander, star anise, cinnamon, and dark chocolate marry up in glaze form to make this spicy delight!" I could definitely pick up every element of the spices! The doughnut itself was made out of a dark chocolate, which served as a nice base for the other flavours! 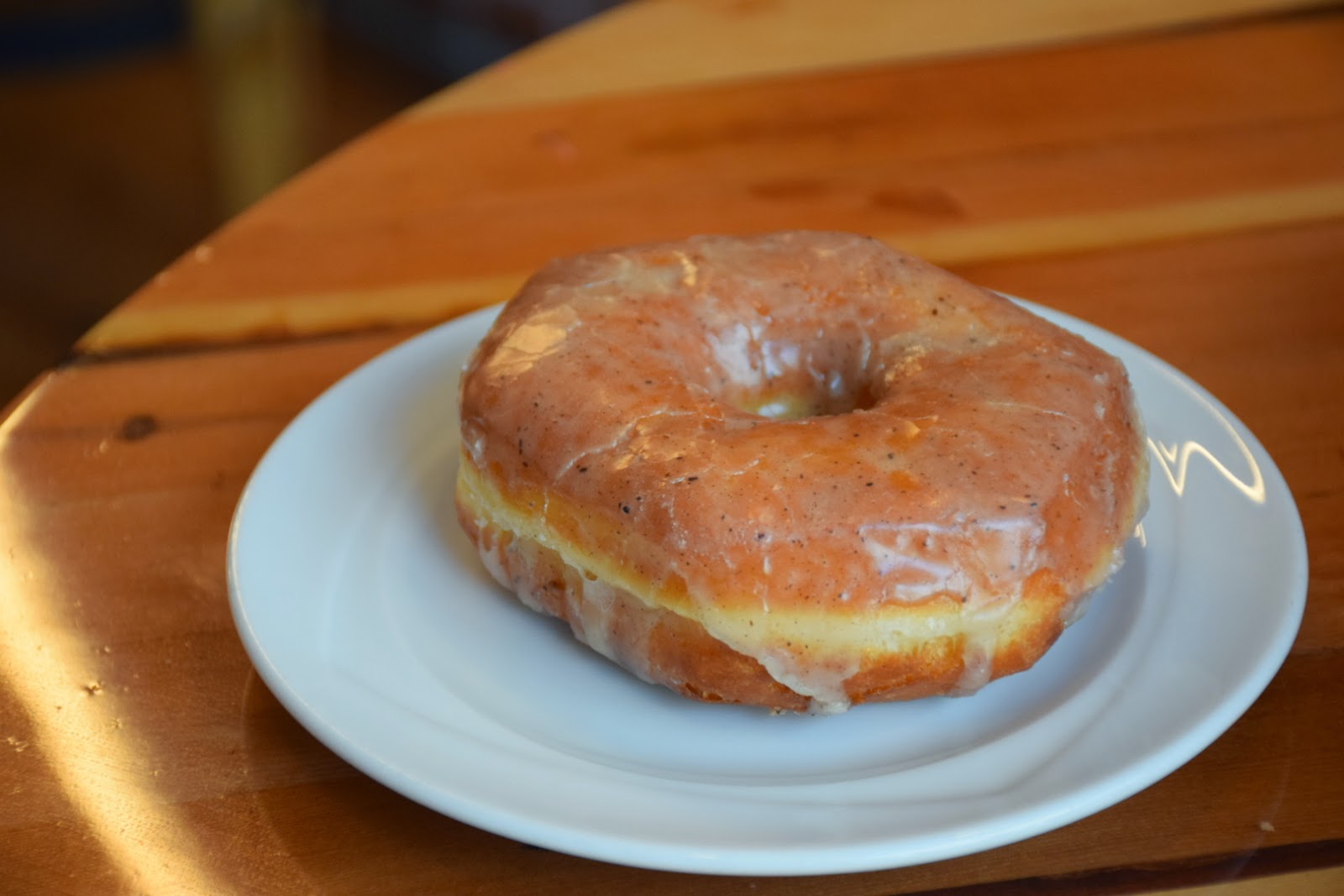 Vanilla Bean
3/5 stars
Cartem's elevates the classic vanilla doughnut to another level! When I bought this it was fresh out of the oven,  so the dough was super soft and squishy haha! The vanilla was definitely very potent, without being cloyingly sweet! 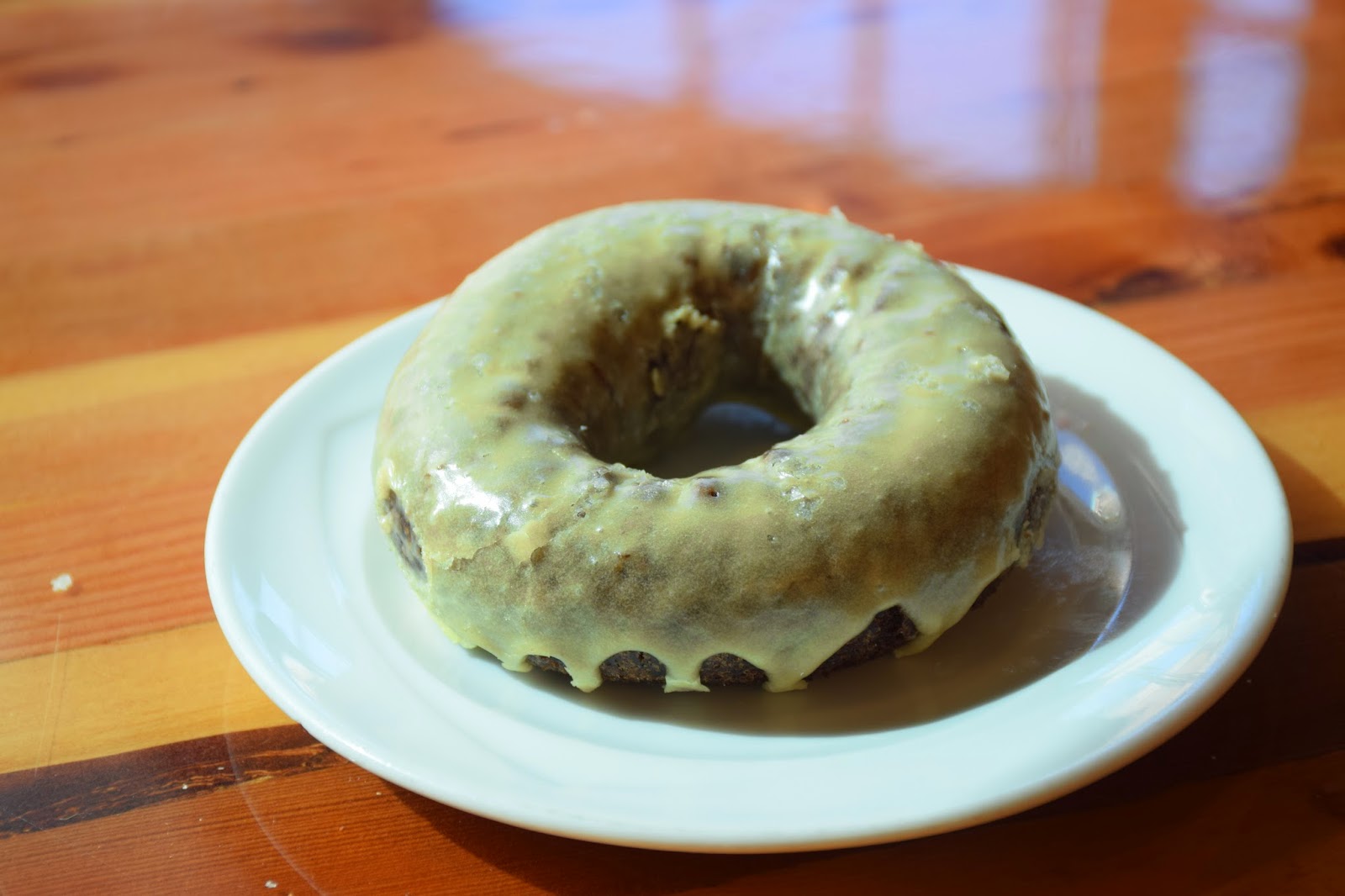 Salted Caramel
3/5 stars
If you're a fan of salted caramel, you'll love this! The caramel flavour was very prominent, as was the salt! The doughnut itself was a chocolate doughnut, which was rather bitter and rendered a bit dry. However, that didn't distract too much from the overall flavour! 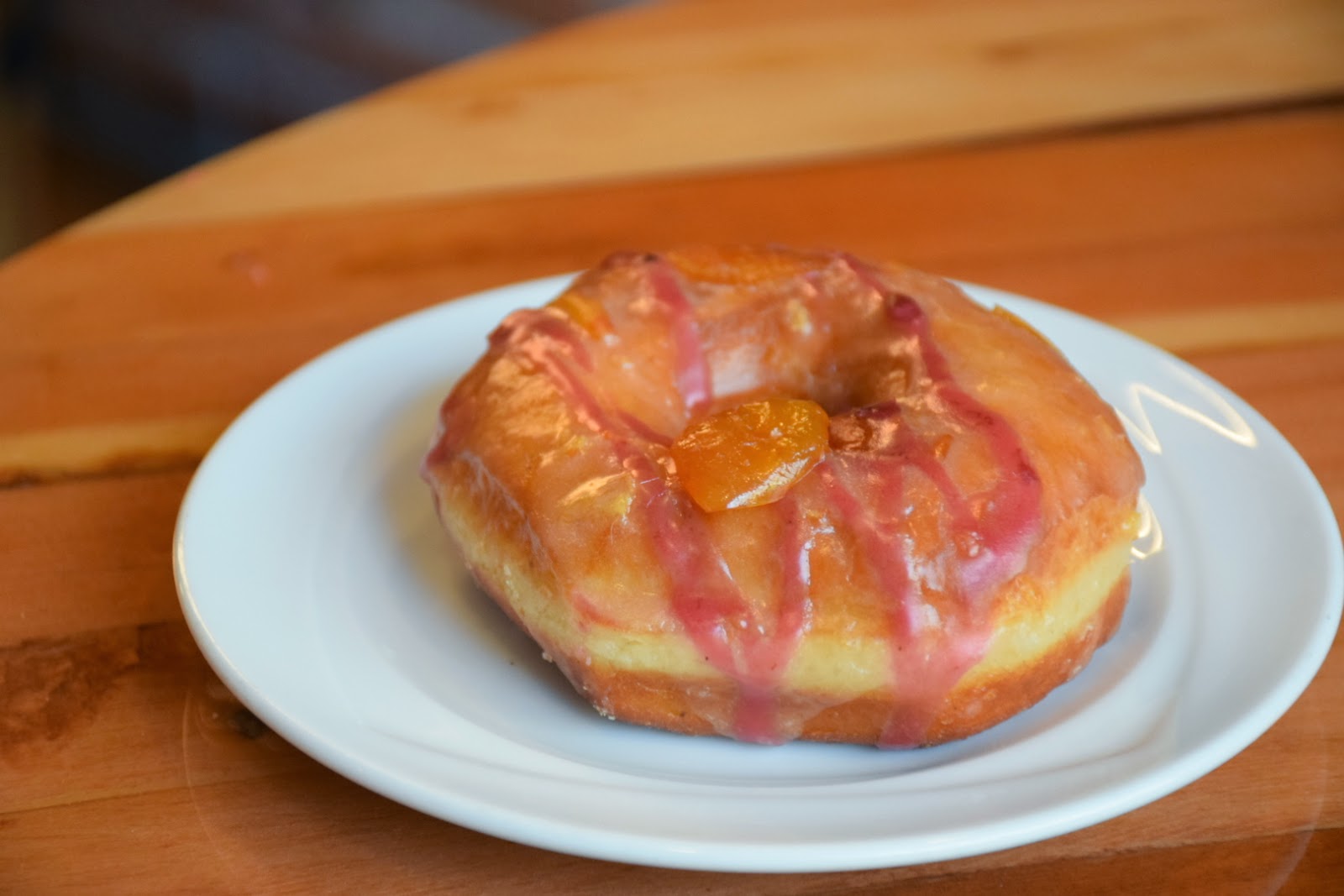 My Cherry Amore
2/5 stars
This one was the most dissapointing of the bunch. It was the last one they had, so I discovered (too late) that it was already dry and stale. I'm sure it would have been better if it was fresh though haha! Flavour wise, it wasn't too sweet, exhibiting a subtle cherry flavour. 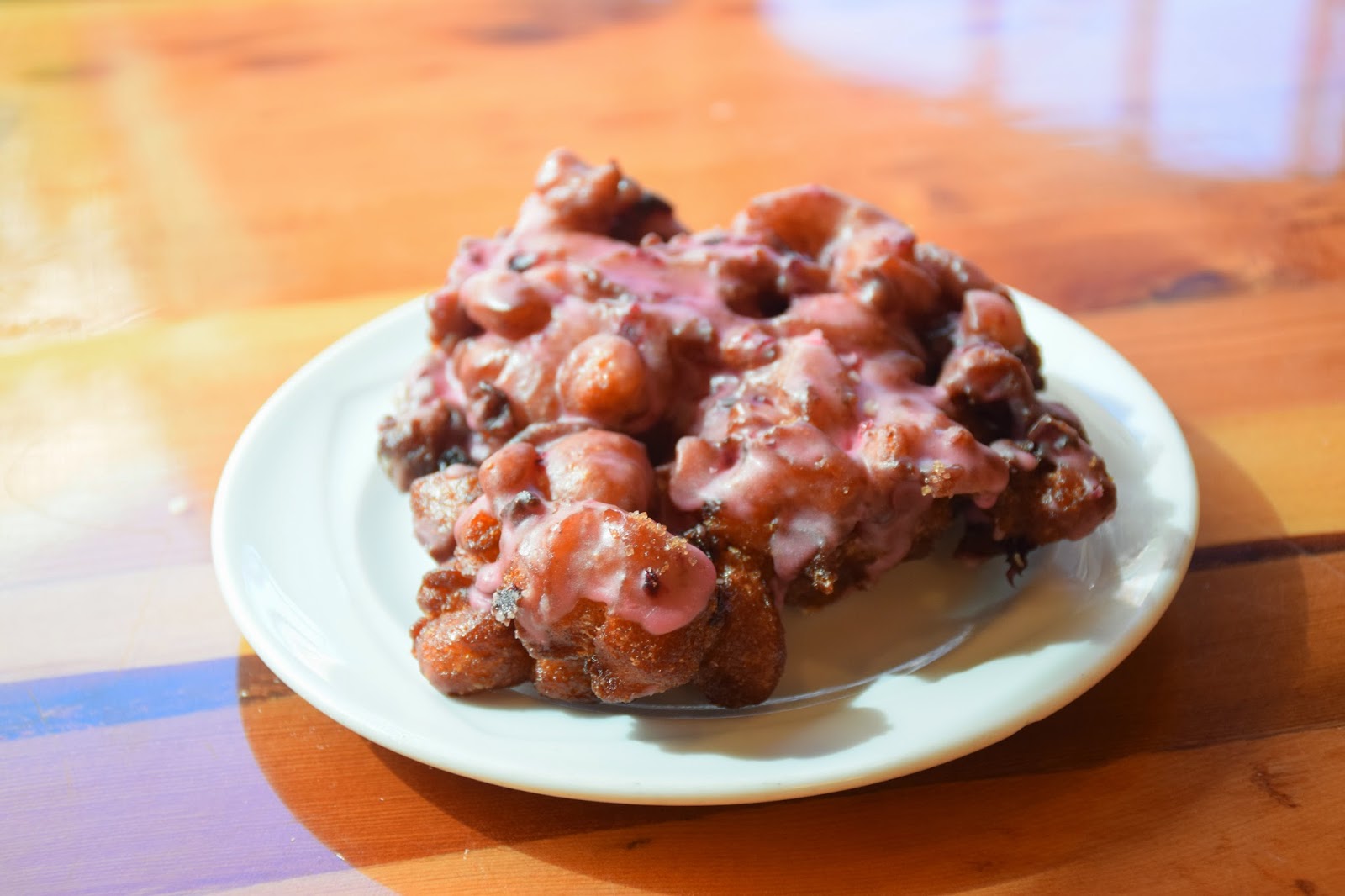 Blueberry Fritter
3/5 stars
This donut seems to be one of their more popular ones, because every time I go, this flavour has the least stock! If you're in the mood for some texture, this is it! The donut is crunchy, with bits of dried fruit in it! The sugar glaze is delicious: it's fruity, creamy and sweet! They also dust granulated sugar on top for some added sweetness. 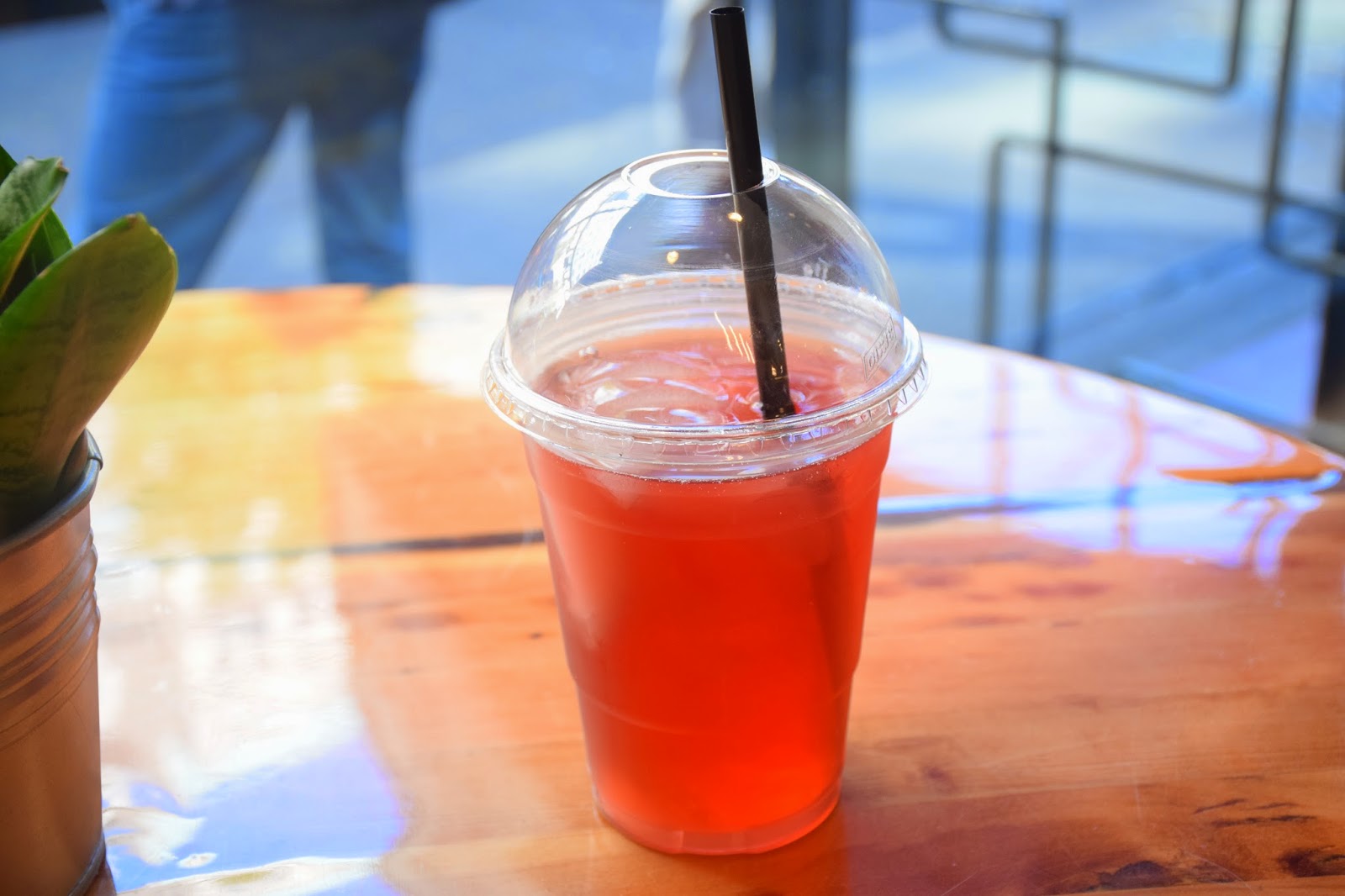 Pink Grapefruit Iced Tea
4/5 stars
People go to Cartems for their doughnuts, but what you may not know is they also have a ton of meal options and drinks as well! They even have milk hehe, for you to dip your doughnuts in! ;)
Since it was scorching that day I opted for a pink grapefruit iced tea! The grapefruit element was really potent and super refreshing on a hot day! 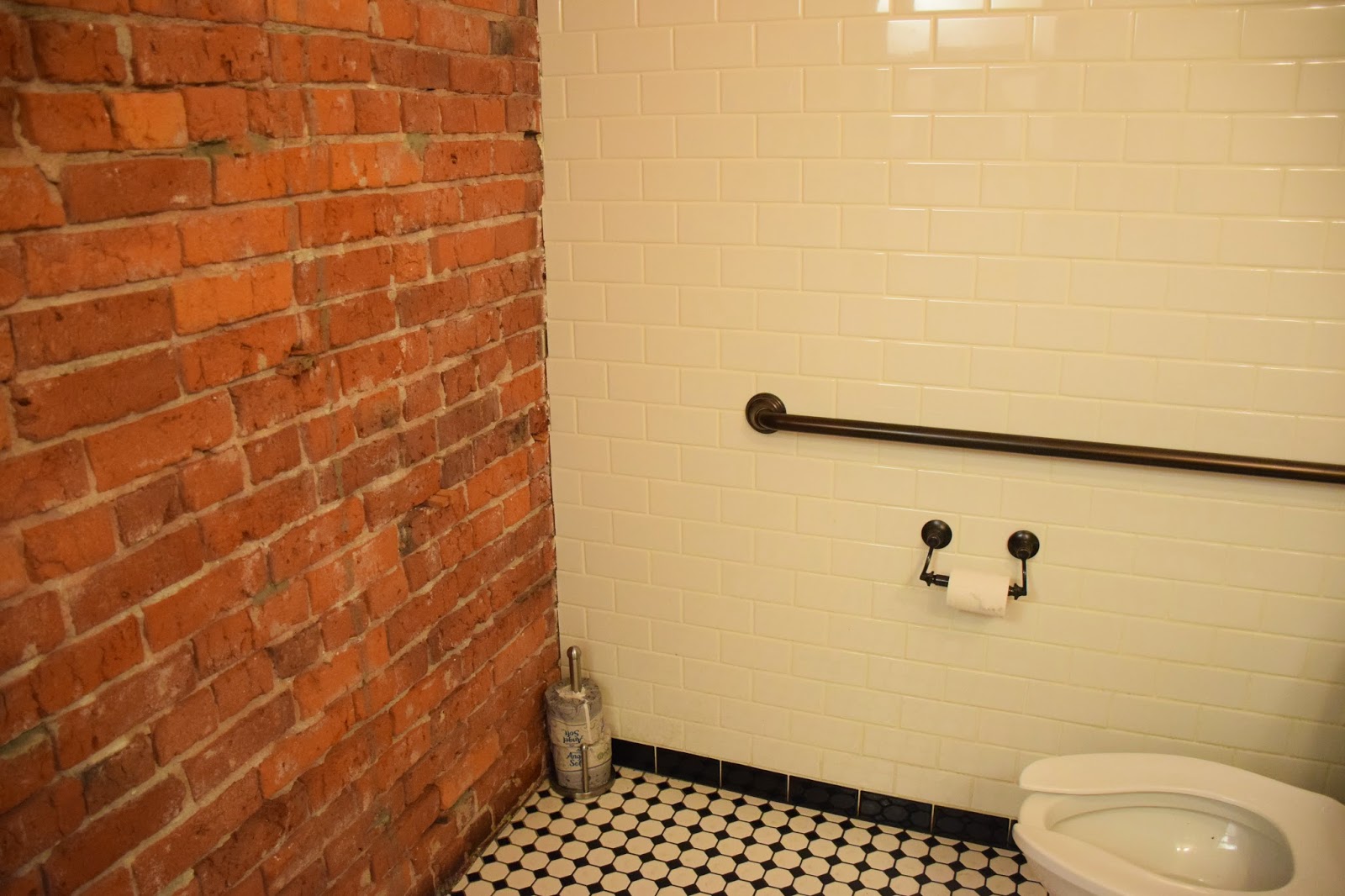 And I leave you with: a picture of their bathroom haha! I realize that the fact I took a picture of their washroom encompasses all types of creepy haha, but seriously, check out that brick wall and tiling! I just love the contrast of the rustic interior to the clean slate wall! Home inspo (or bathroom inspo rather) right here! This deserves to be on a pinterest wall! ;)