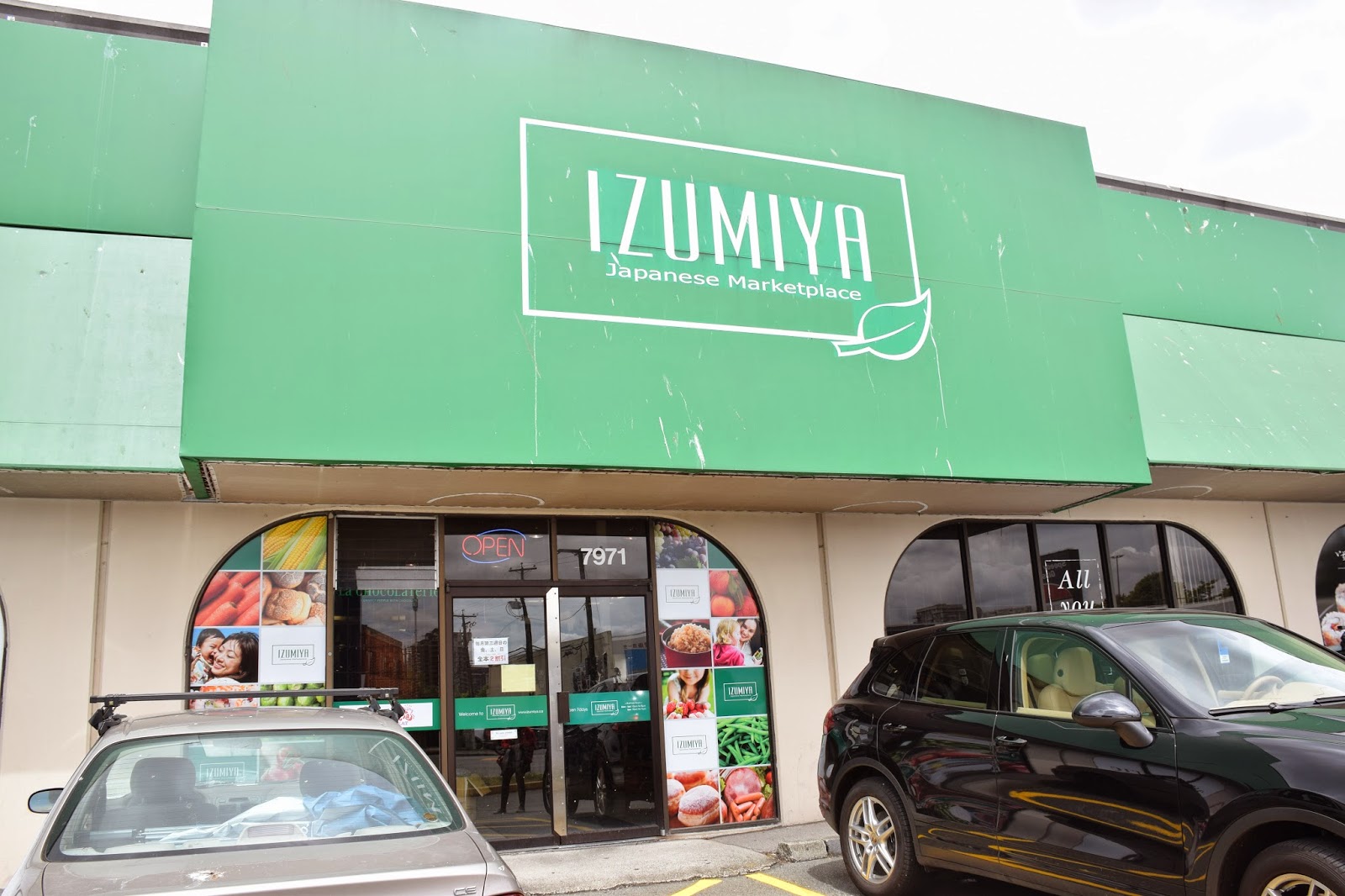 Izumiya is a Japanese Market located on Alderbridge across from Landsdowne! You have T&T for your chinese groceries, Hmart for your Korean, and now Izumiya for your Japanese! They have a ton of Japanese food, snacks, and my favourite part: the prepared food section!

They have a variety of different Donburis, Bento, Sushi & Sashimi! I know what you're thinking "Uh...prepared food?" Don't scoff, I promise you, it's not your generic, disgusting, pre made refrigerated food. Okay, it is refrigerated, but it's actually really yummy haha!

They have a microwave where you can heat up your bento boxes but I didn't use it because I don't like nuking plastics haha! Call me cautious or paranoid, but the bottom didn't have a "Microwave safe" label on it, so I decided not to risk it haha. I actually don't mind eating cold food, as long as the flavours are there, and the food isn't soggy, I'm content! :)

You probably don't know this about me but I'm actually kind of a hippie haha! Of course there are debates about what constitutes a "hippie" lifestyle but I'm certainly more "hippish" than most people I know haha! I use vegetable oil based castile soap, organic shampoo, plant toothpaste and I don't even wear makeup haha! I go Au natural baby! My mom is also really into "cleansing" the body of toxins,  and such haha. 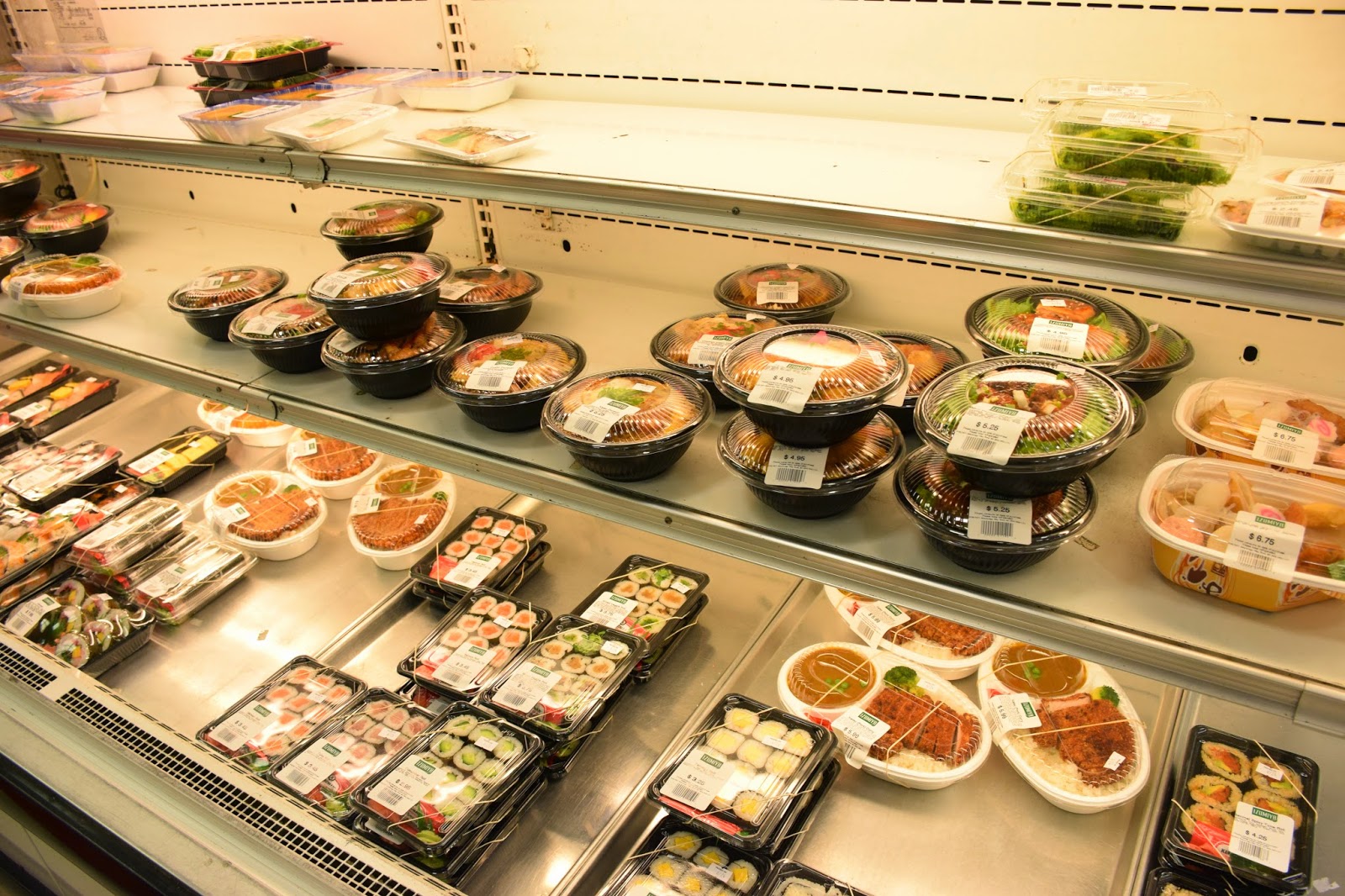 (Click to Enlarge)
Looks can be deceiving, doesn't look too appetizing does it? You'll be surprised if you tried it! For what it is, everything is pretty tasty, and the best part? The low prices hehe! 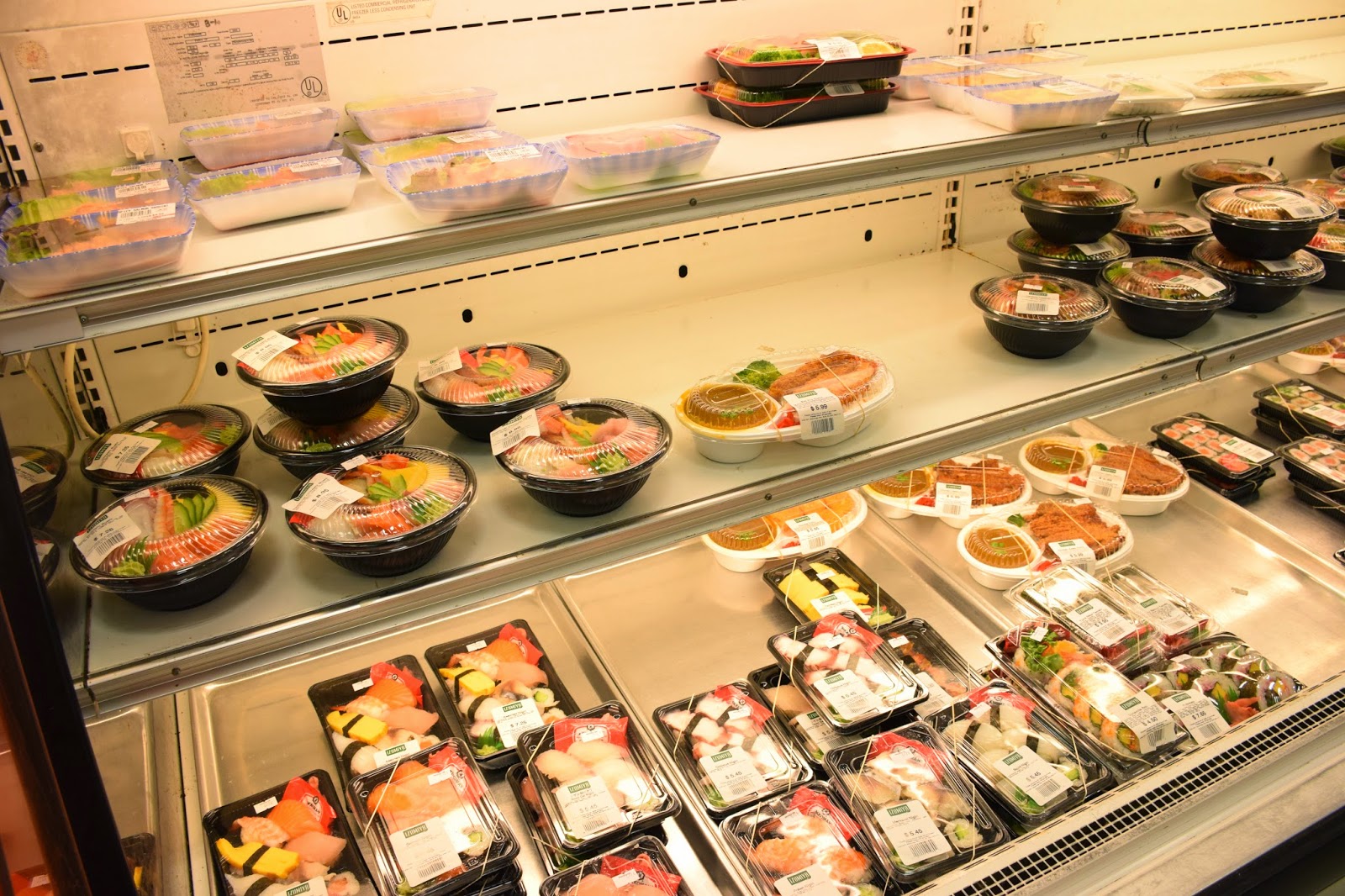 The chirashi don is really fresh and so awesome! So is the Unagi and Squid Nigiri! :D 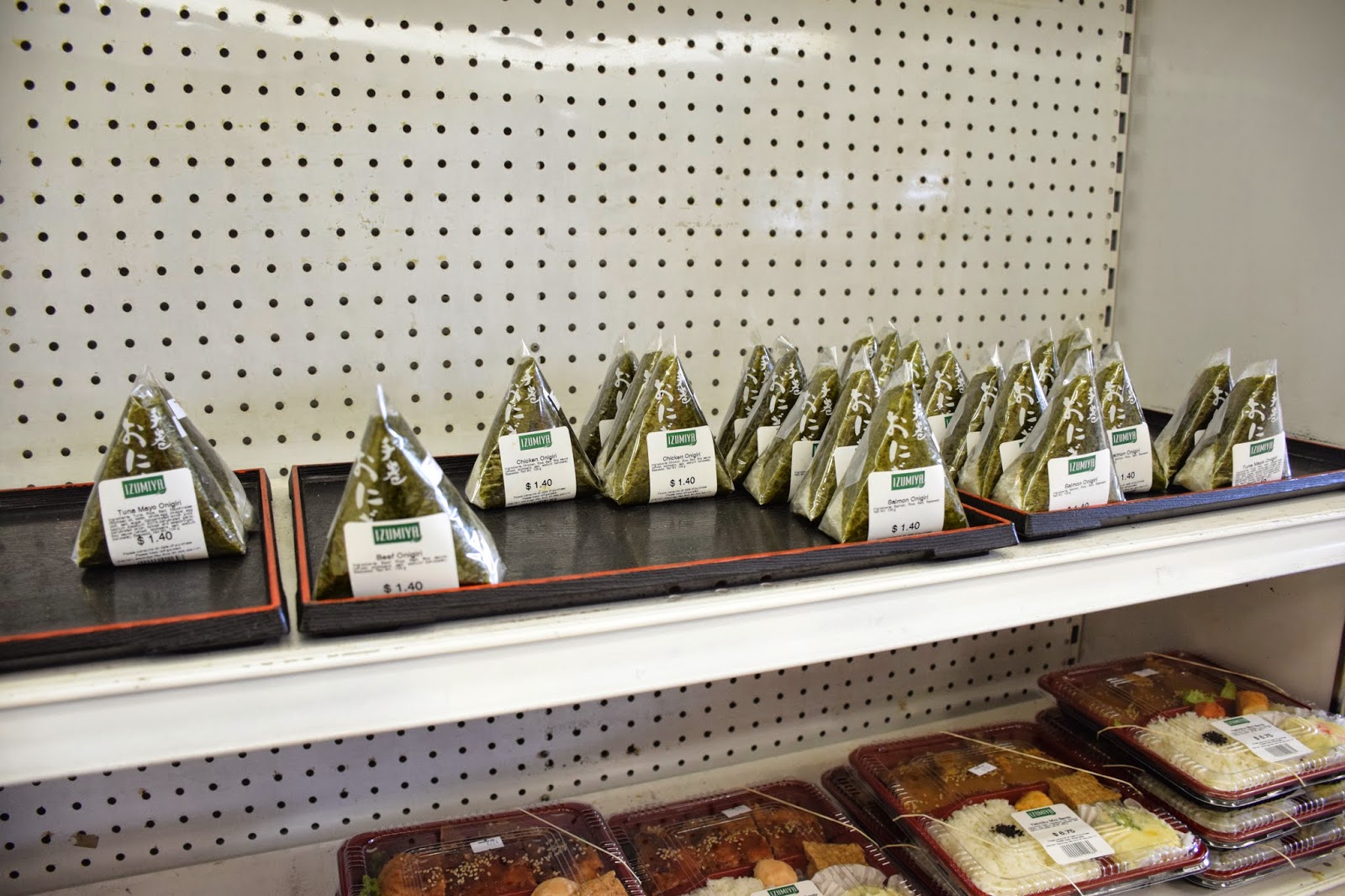 They also have a ton of different Onigiris! :D 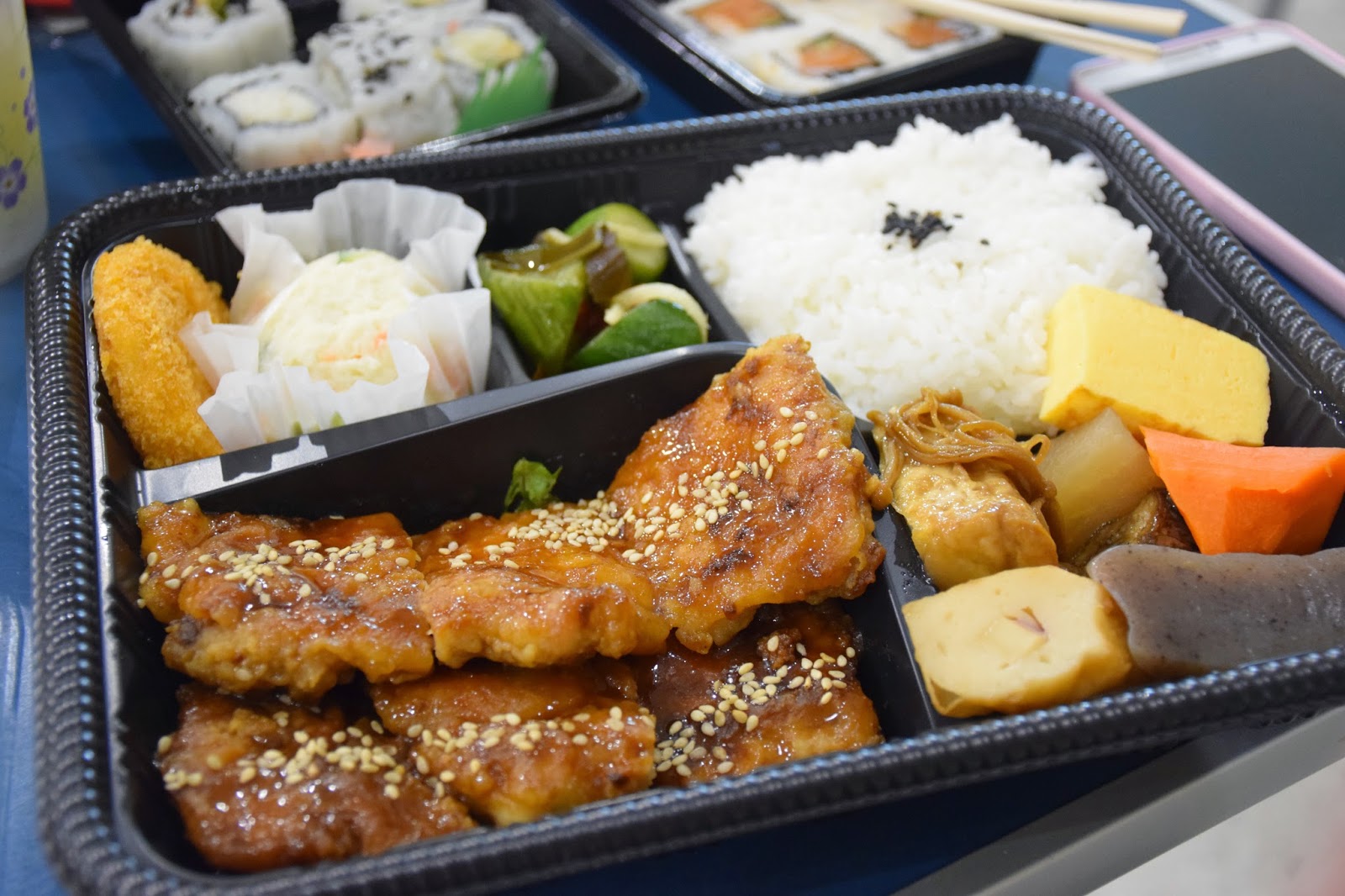 Since I didn't heat it up the chicken teriyaki was a little hard, but the flavour was great! It had been doused with ample amounts of sauce, enough to cover every piece!

I was pleasantly surprised by the oden! It was the best part of the bento hehe. I absolutely adore oden and for a bento, this was pretty well executed! Everything was super flavourful, with the sauce having penetrated into every piece! The potato salad was pretty good as well! It was the perfect consistency, whipped without being too mushy. It was a mix of sweet and sour flavours, and had dices of vegetables in it. 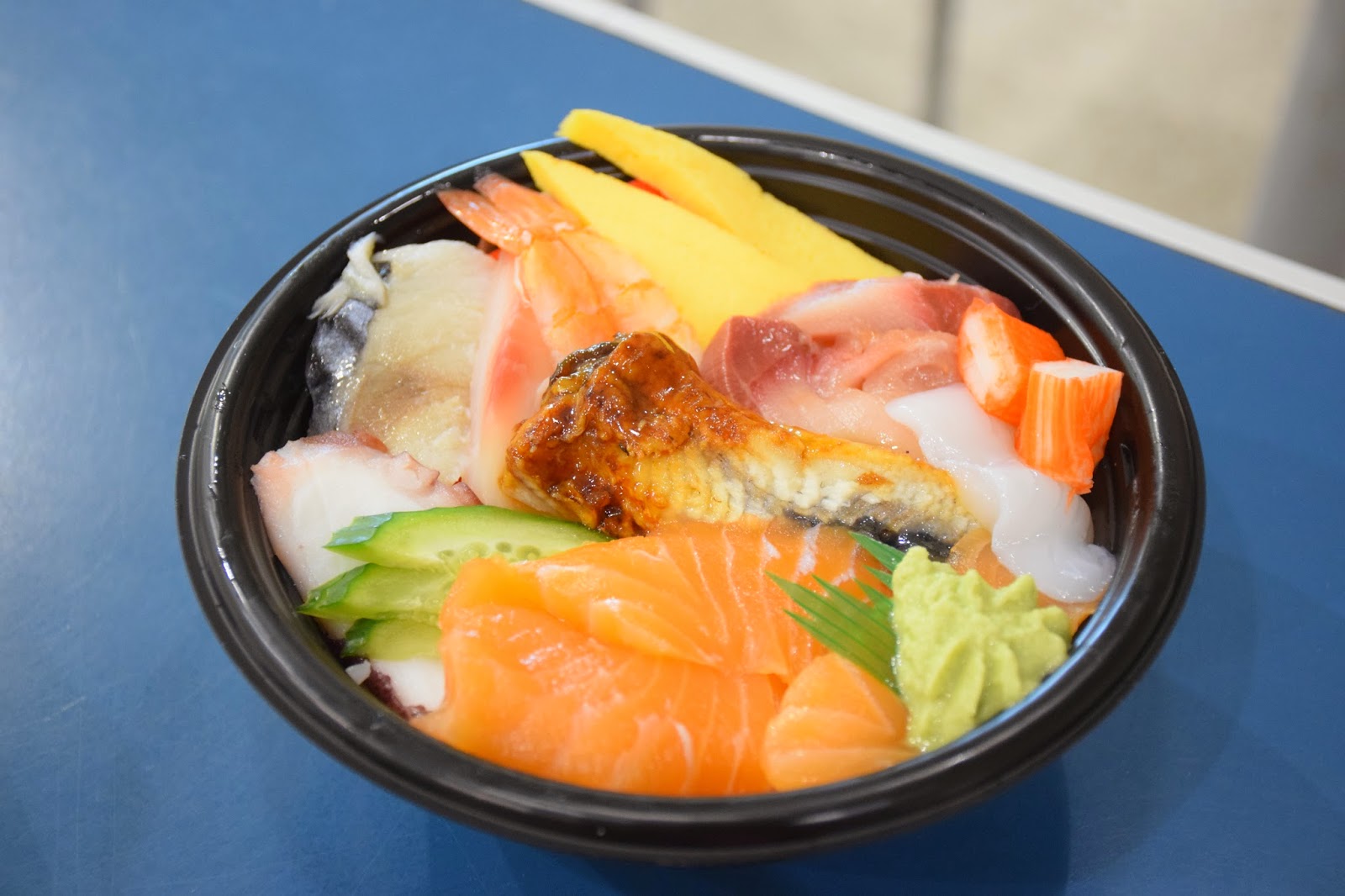 4/5 stars
This was great! There was no shortage of ingredients, all of which were really fresh! If you've never Chirashi you just definitely try it! What I love about Chirashi is that every piece of seafood has its own distinct flavour. There's also rice on the bottom for you to have even between bites to cleanse your palate! I left the unagi for last, which was a smart move haha, because I knew it would overpower the other flavours! I'm glad I did, because the unagi was strongly seasoned with a sweet sauce! 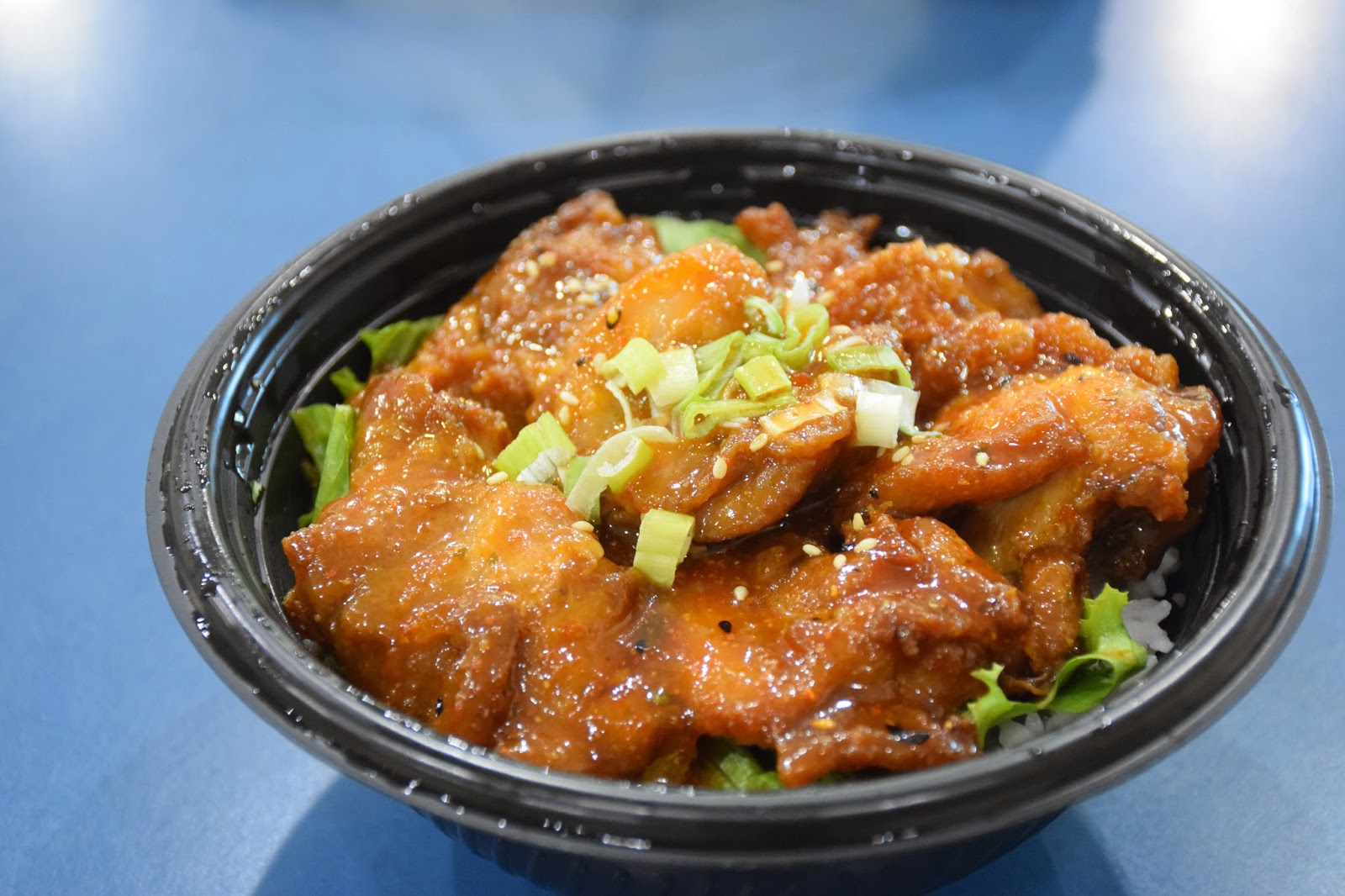 3/5 stars
It seems like this is one of their more popular dishes because everytime I go, this one has the least stock! Like the chicken, since I didn't heat it up, it was a bit hard haha, but I didn't really mind! The chicken as reasonably juicy, with the skin being slightly crispy. This was predominantly spicy, unlike other chicken kaarages that have a sweet element to it, this one didn't. There was no shortage of sauce and there was enough to cover every piece of chicken! There was so much that it drizzled down and covered most of the rice in the spicy sauce haha! 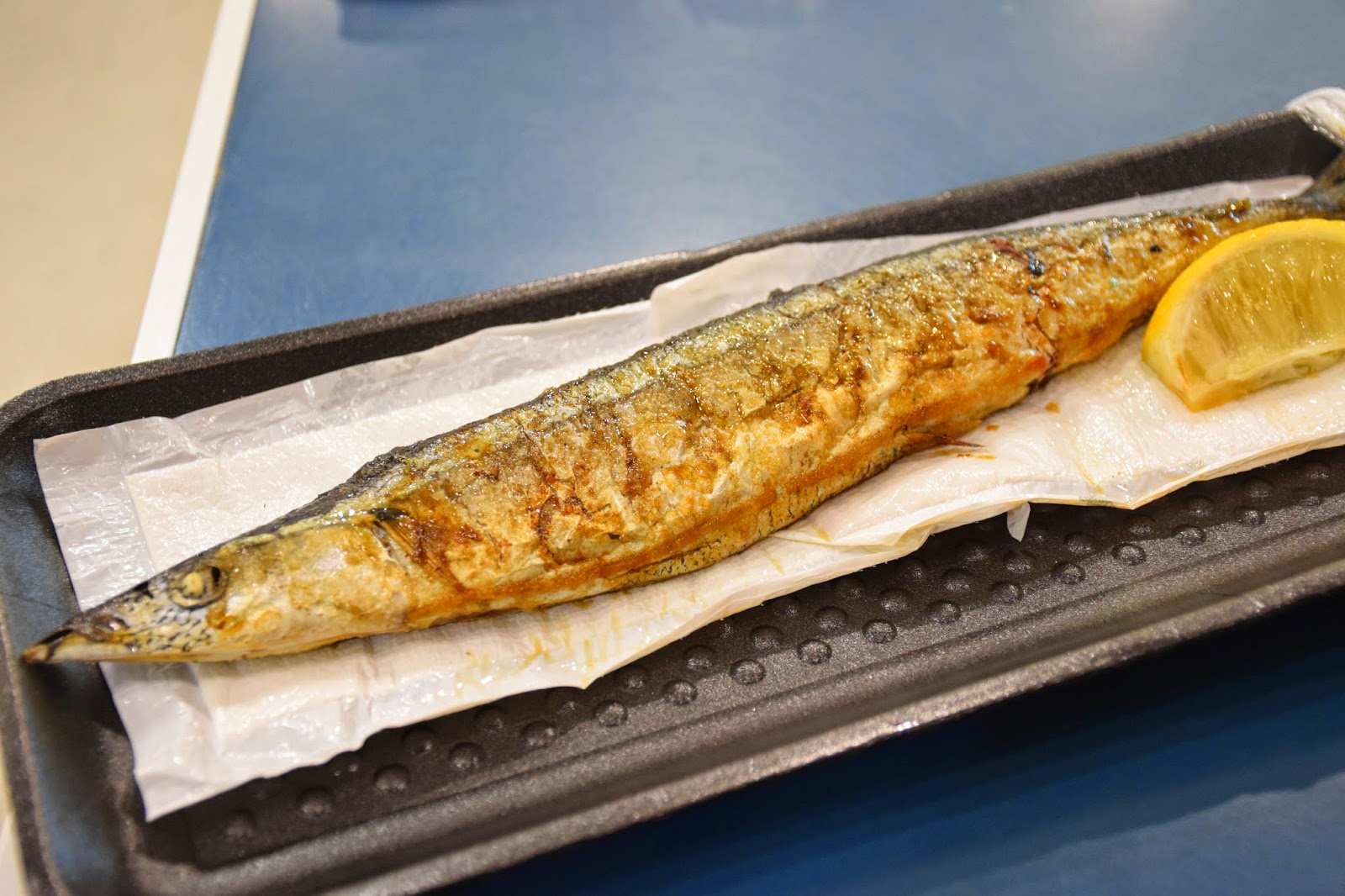 Fried Mackeral $2.75
For under $3, this was a great deal! I was pleasantly surprised at how good this tasted haha! The mackerel had been well seasoned with a robust Shio flavour. The skin was crispy, albeit rather oily. Paired with rice, this was the perfect size for one person! 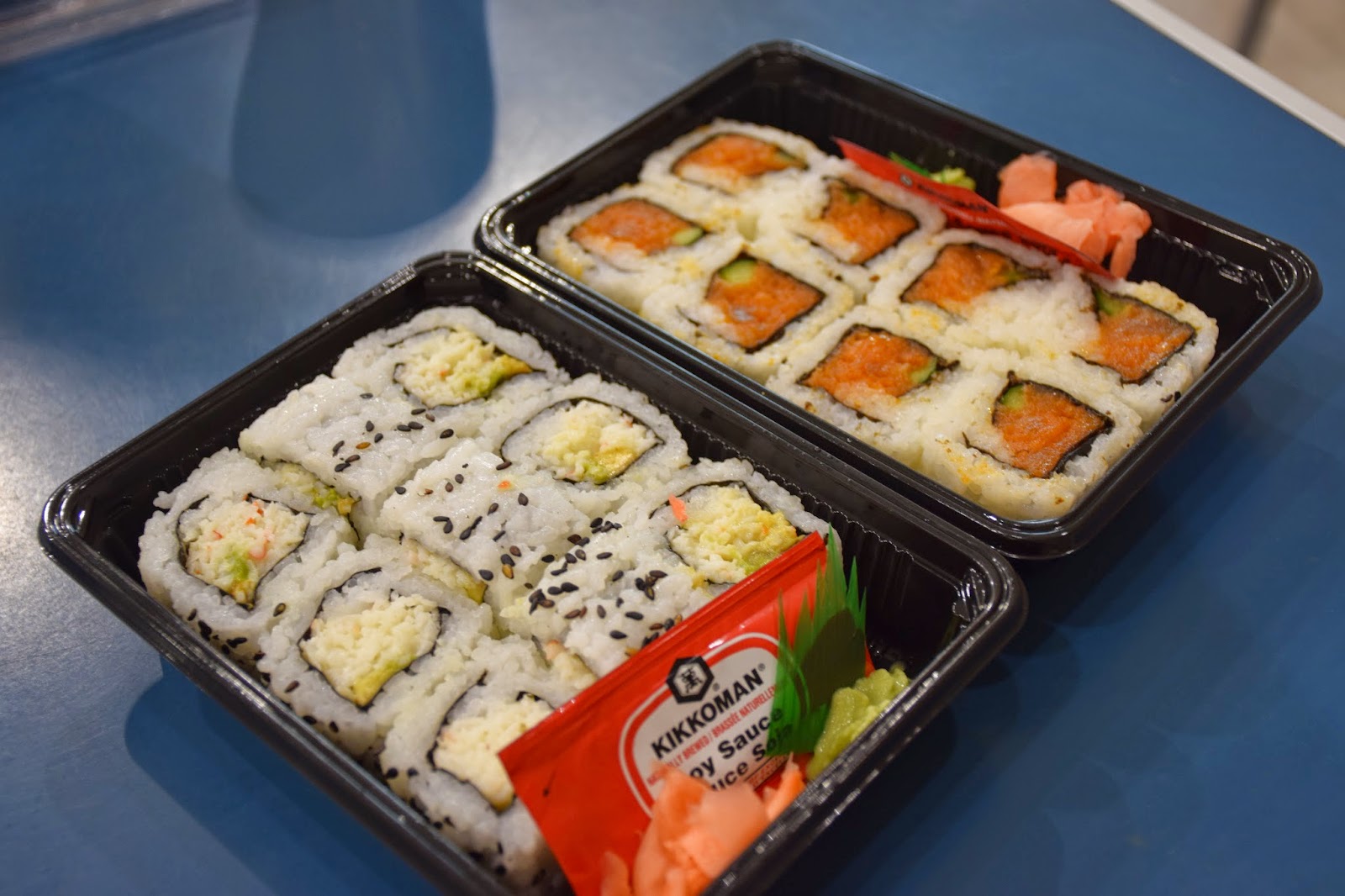 I usually steer clear of packaged supermarket sushi, but Izumiya is an exception! The sushi is actually rather well made, and the rice is actually sour, and not plain! The imitation crab was of the firmer variety, wasn't too mushy and was well seasoned! The spicy tuna was just the right spiciness, with lots of tuna in it! What I don't like about having it in a container is that the pieces get squished and become more square shaped but it's not that big of a deal haha! 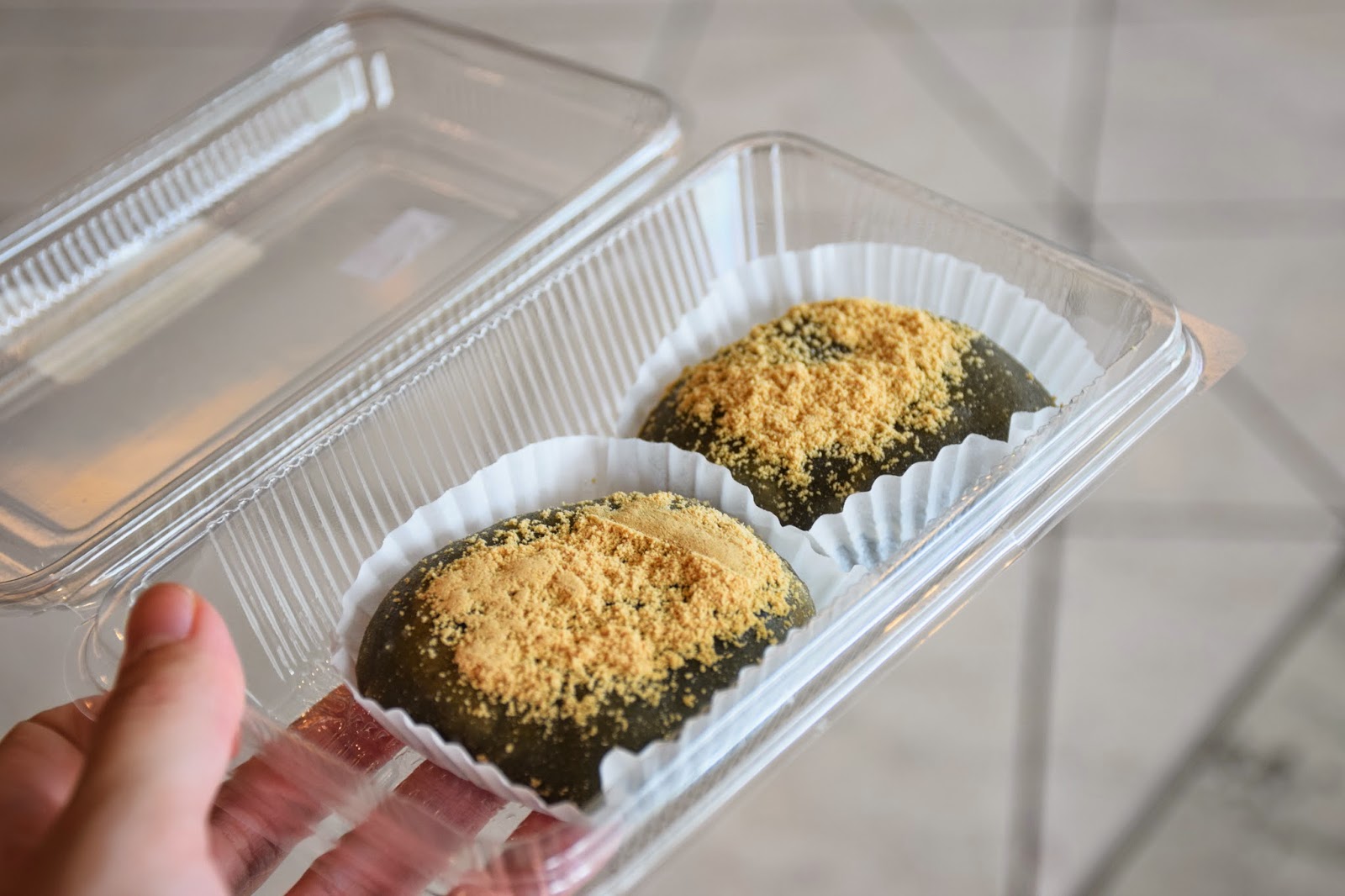 2/5 stars
The yellow dust on top if the mochi is actually grounded soybean powder haha! The mochi itself, while chewy, was rather bland and lacking in flavour,  with the only flavour coming from the soybean on top. The interior was filled with red bean which was so subtly sweetened I could barely even taste it haha. 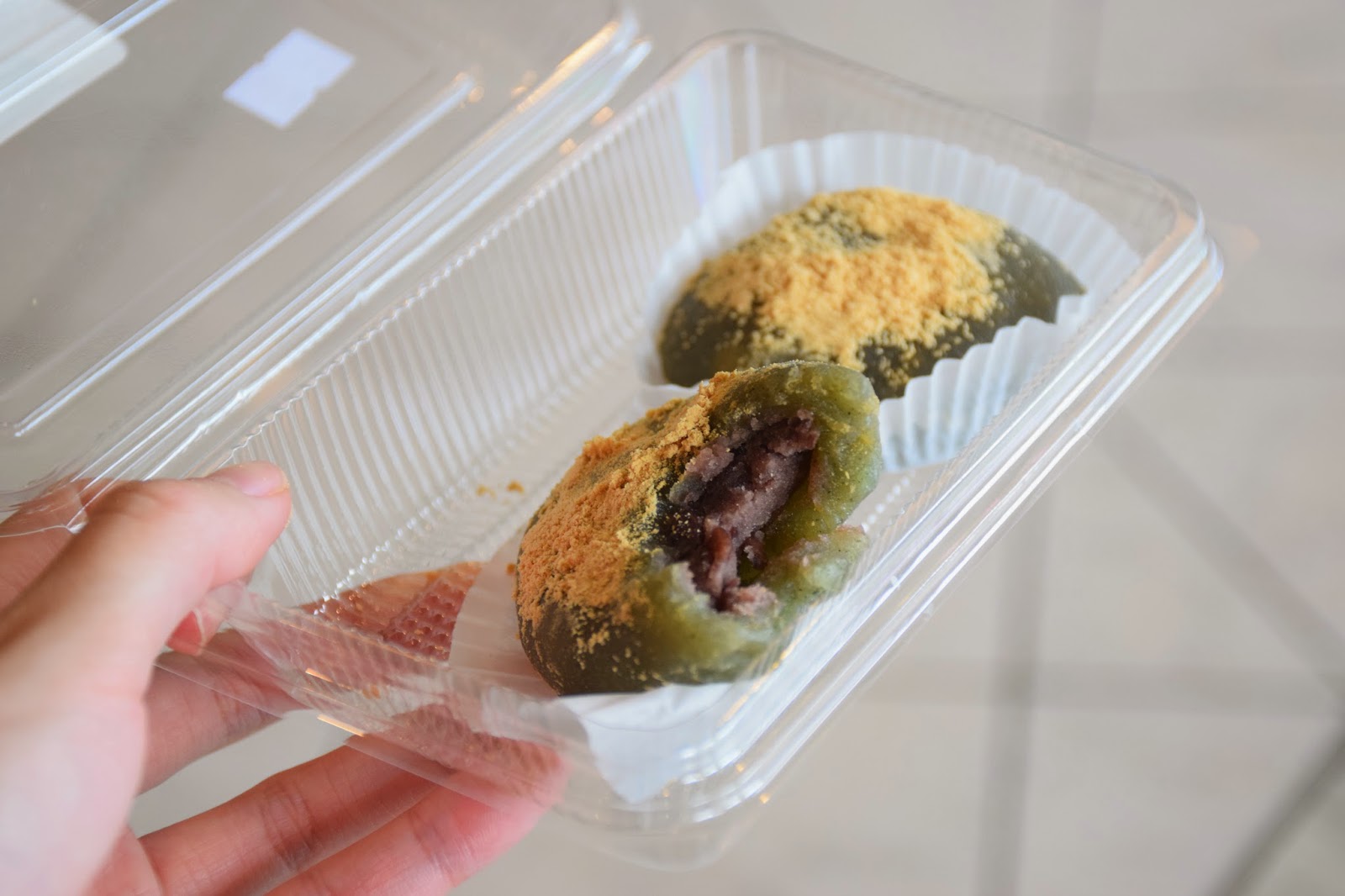 Izuiyama also has a super affordable lunch buffet inside their supermarket,  with alot of the same items from their prepared food section!! I'm really hoping they'll have oden and *fresh* tempura hehe because let's be honest here, who wants to eat soggy tempura?! Answer:Nobody haha!! I'll definitely be going in the near future with my AYCE loving parents to scope out the scene for you guys :D