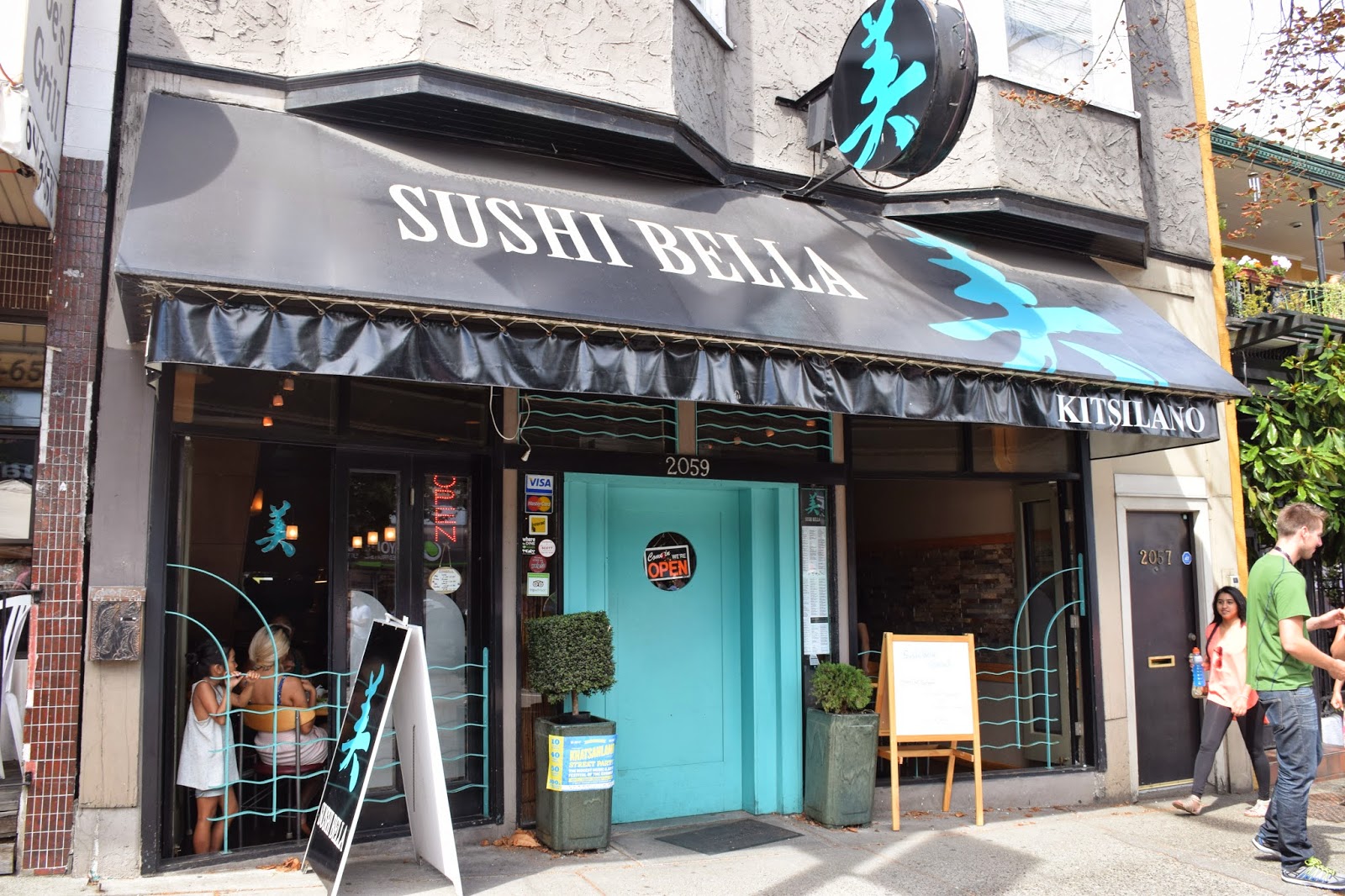 Sushi Bella has locations all over Greater Van, one on Robson, another in North Van, this one in Kits, and another one opening soon beside Boiling Point in the Metrotown area! It was 30 something degrees outside that day, and my grandma couldn't walk any further, so I looked for the nearest restaurant, which happened to be Sushi Bella! Sushi Bella first fell on my radar when I found out they were opening a location near Metrotown (my stomping ground haha!) Quoting from their website, Sushi Bella is actually: "an exquisite combination of Japanese, French and a hint of Italian." I can definitely see that in the presentation and usage of ingredients that render most of the dishes "fusion!" 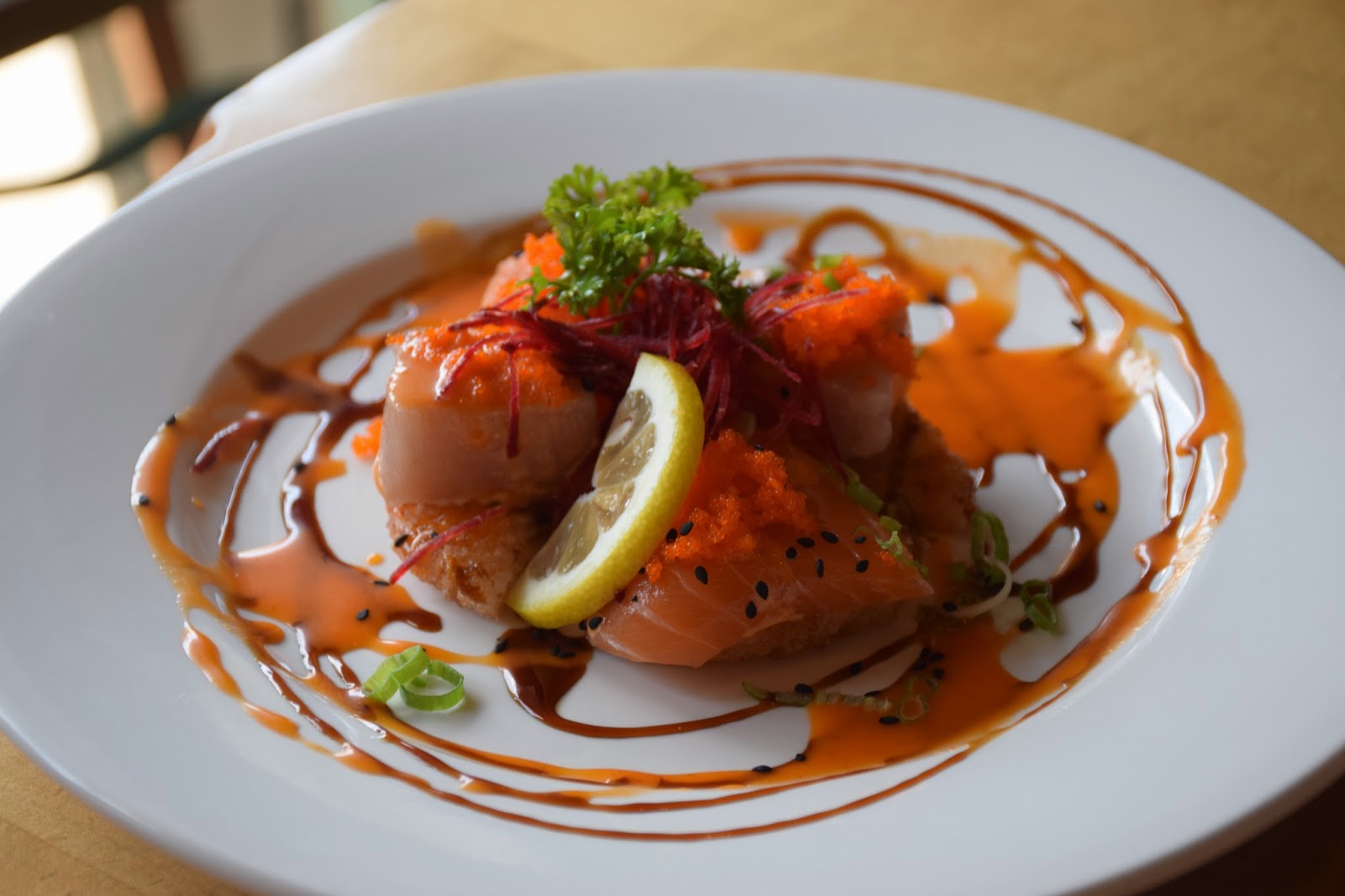 Sushi Pizza $7
3.5/5 stars
They have this in "Original" or "Volcano!" I opted for original which consists of tuna, salmon, masago and chilli oil! The sauce was delectable! It was a savoury combination of mayo, teriyaki sauce, and chilli oil! The fish was sitting on a fried rice pancake, which had a glutinous like texture. The fish tasted really fresh, and was garnished with some fish roe. The fried texture of the pancake was a great contrast to the softness of the salmon! 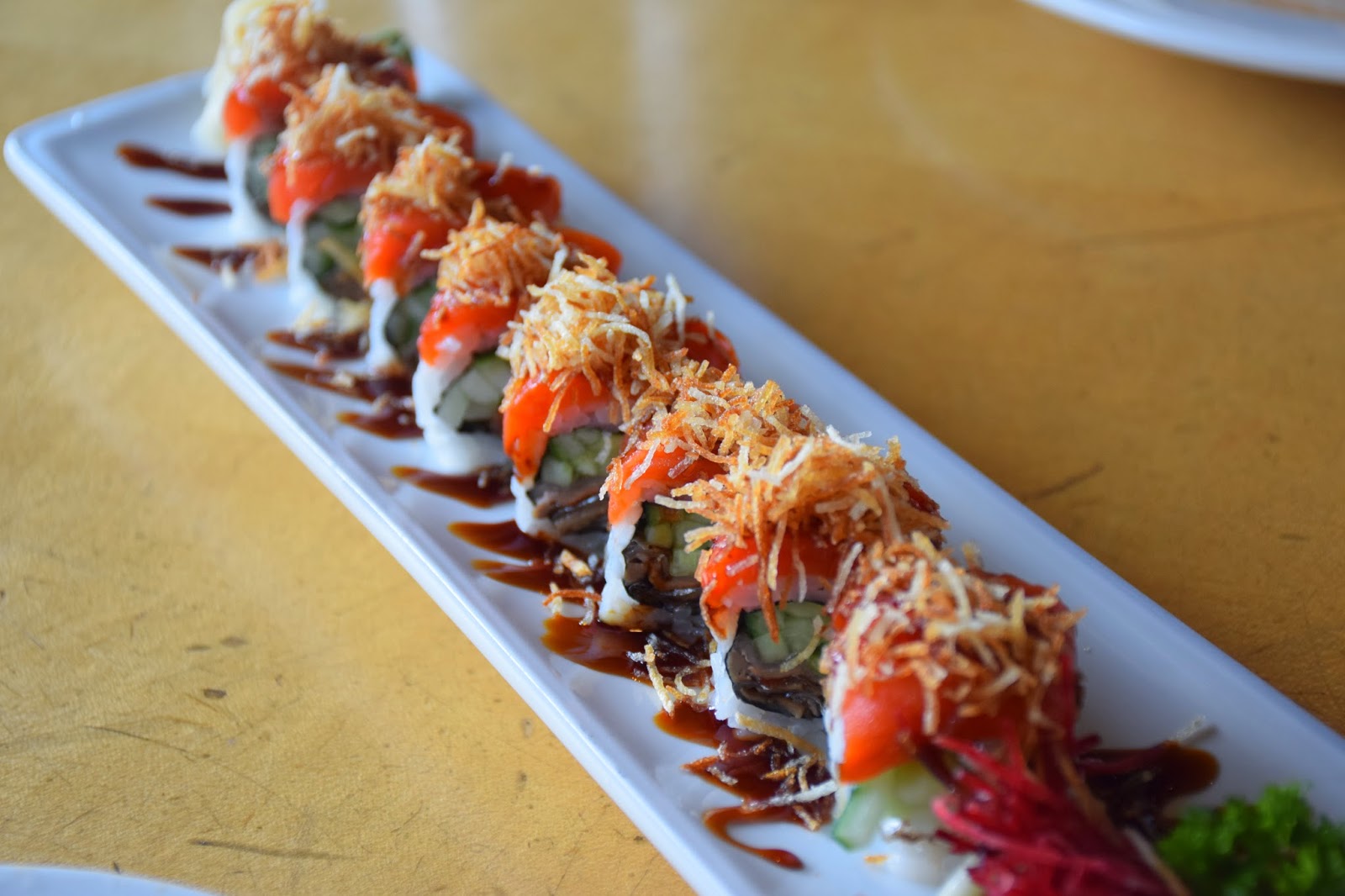 Wild West Roll $7
3/5 stars
They're also known for their speciality rolls or as they call it their "Bella Rolls!" They have so many speciality rolls, it was hard to choose haha! In the end I settled on their Wild West Roll which consists of BBQ Salmon Skin, cucumber, with fresh salmon, topped with a crispy potato topping and unagi sauce! I love BC rolls so I was totally sucked in by the salmon skin and unagi sauce! The sauce content was at a minimal, which really let the flavours of the salmon skin shine through! The salmon skin was crunchy, with a smokey, charred flavour. The salmon tasted fresh, and the cucumber and crunchy potato added an interesting textural contrast to the roll. The unagi sauce added just the right amount of sweetness as to not overwhelm the other components of the roll! 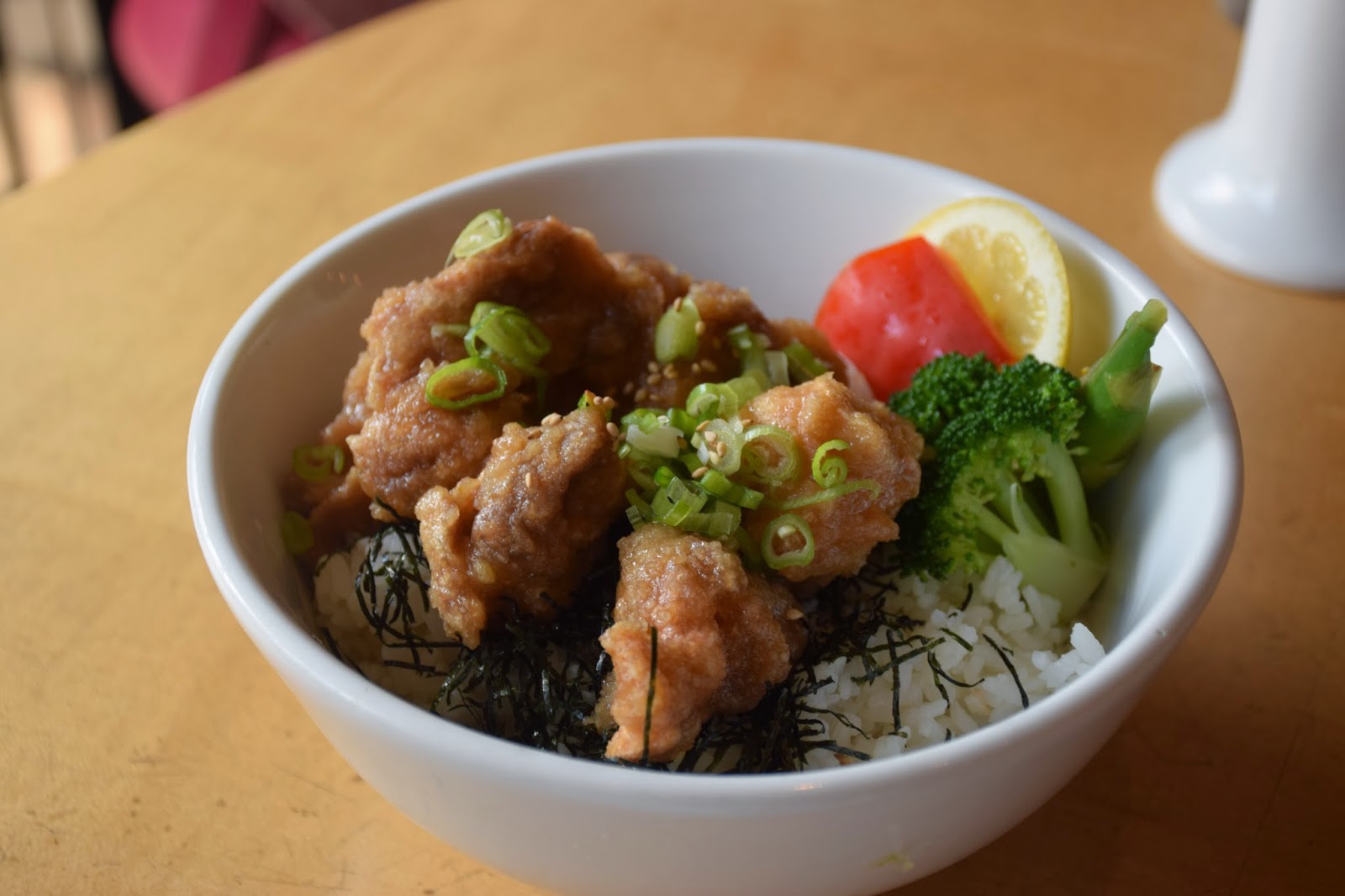 Lunch Special: Ginza Kaarage Bowl $8
2/5 stars
They have a ton of affordable lunch specials if you don't feel like ordering a bunch of appys, and entrees, because that can add up really quickly haha! The Ginza Kaarage Bowl is deep fried chicken w/ a special sauce on kizami nori rice! I was rather disappointed by the chicken, because the skin was soggy and exhibited too much moisture! The skin wasn't crunchy at all and just fell limp. The saving grace of the dish was the nori, which added a good amount of flavour to the overall dish. 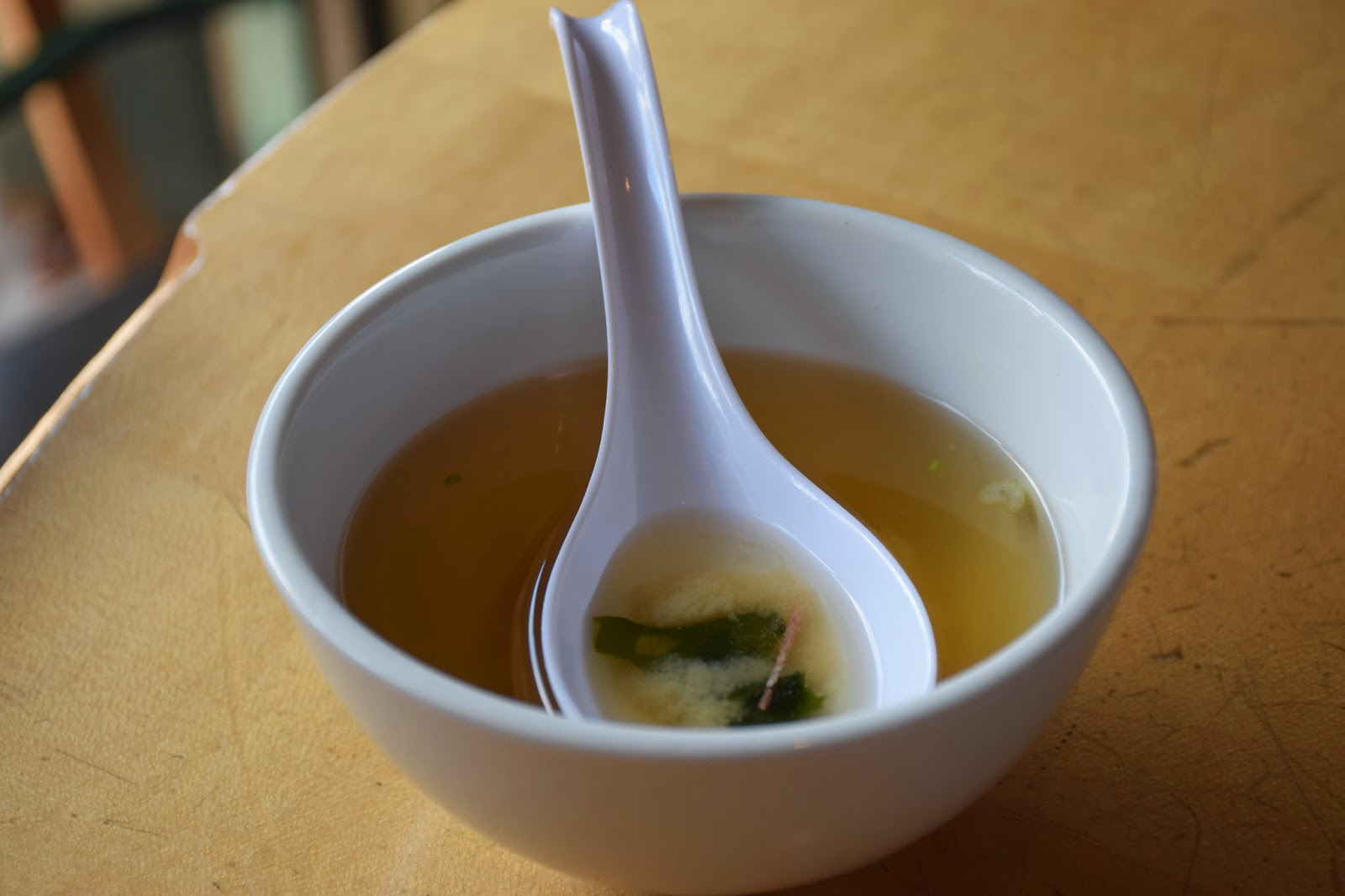 Complimentary Miso Soup
3/5 stars
All of the lunch specials come with a complimentary bowl of miso soup! This bowl was quite large, but with minimal ingredients. There wasn't that much seaweed or miso in it. But at least wasn't too salty though, and didn't taste like MSG! :) 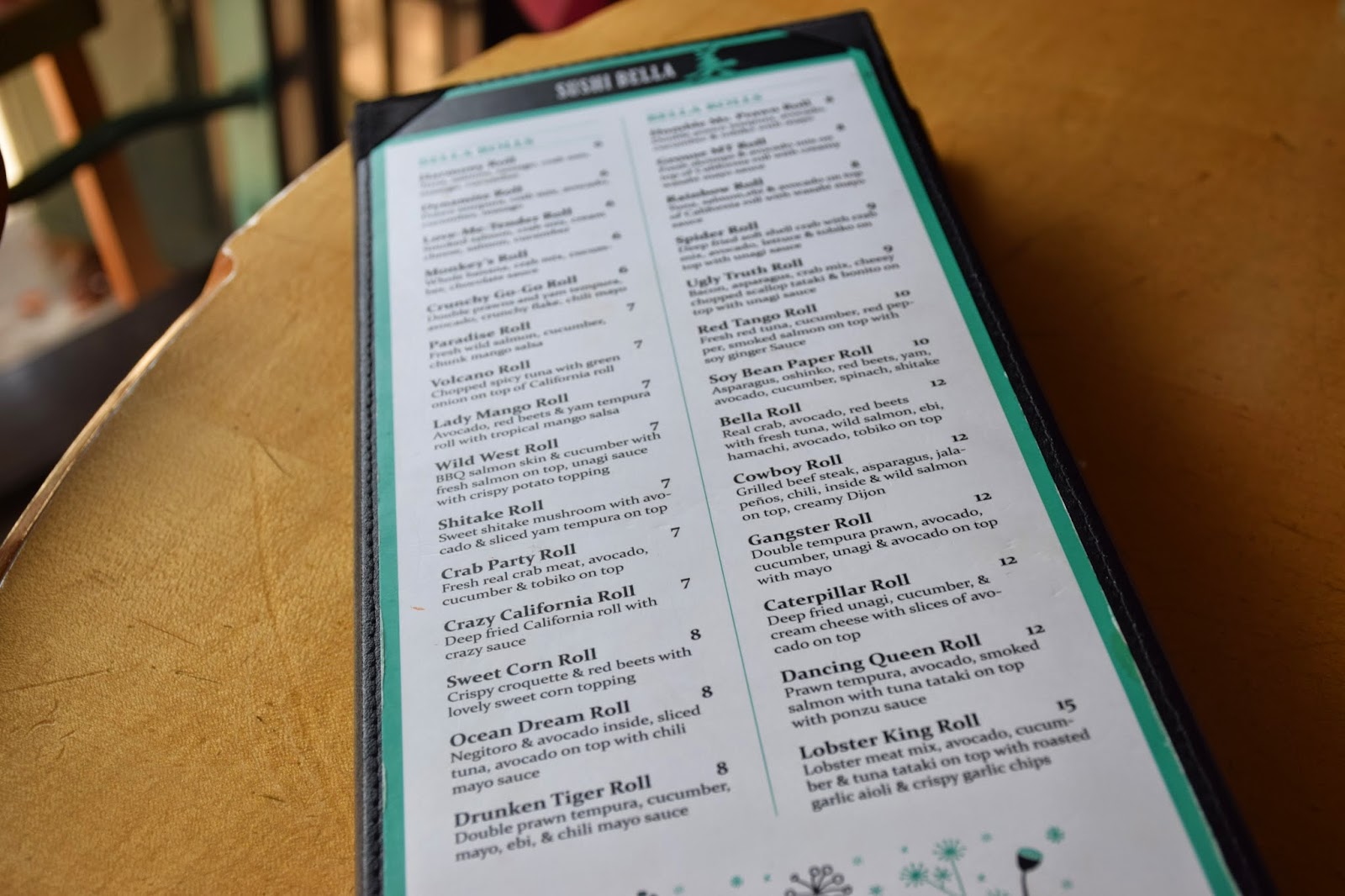 And here's a look at their "Bella Rolls!" Haha I like the names, definitely creative ;)  Cowboy or Gangster Roll anyone?