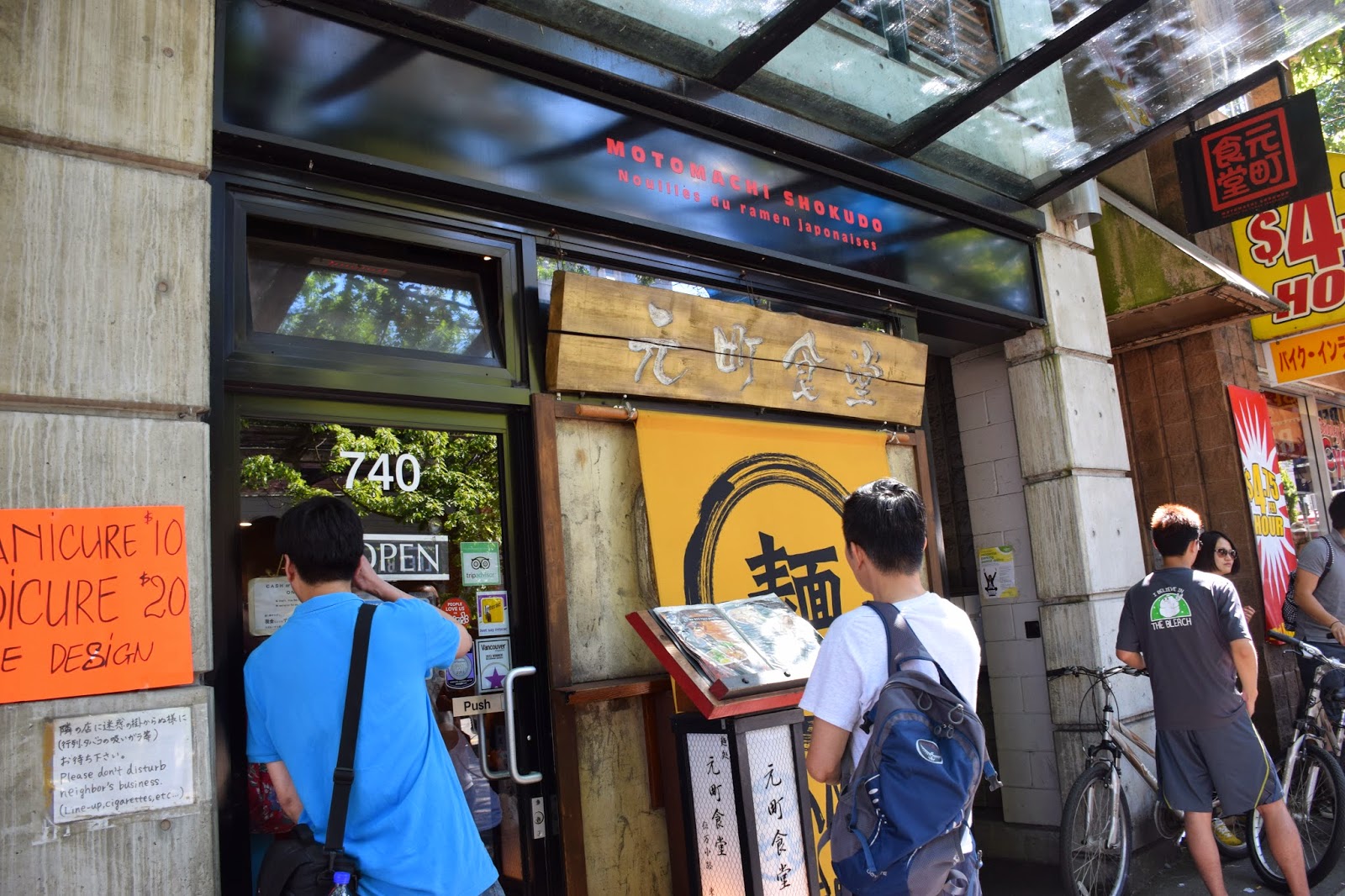 I've been on such a ramen kick lately, even with the weather warming up, I find myself craving a steaming bowl of noodles every other day haha!

That day I dragged along my mom and grandma, it was my grandma's first time having Japanese ramen! We were originally going to go to Kingyo for their Kingyo box but it was closed -.- So we went to Motomachi instead! Motomachi serves up more "modern" or "fusion" ramen, as opposed to the more traditional offerings!

Run by the same group as Kintaro, Motomachi, their hip new cousin, is just a few doors down! The ambience is totally different, notches higher than Kintaro. Real estate definitely comes at a premium though, the store is so small it can only accommodate 30 or so people,so be prepared to wait in line!

We ended up waiting 25 mins for a table, and got seated near the door, in the square table! Yay! I was dreading sitting at the communal table with a bunch of strangers haha! It's awkward eating with people you don't know, especially when I have a huge camera and I'm taking pictures of my food in every feasible directions ;) 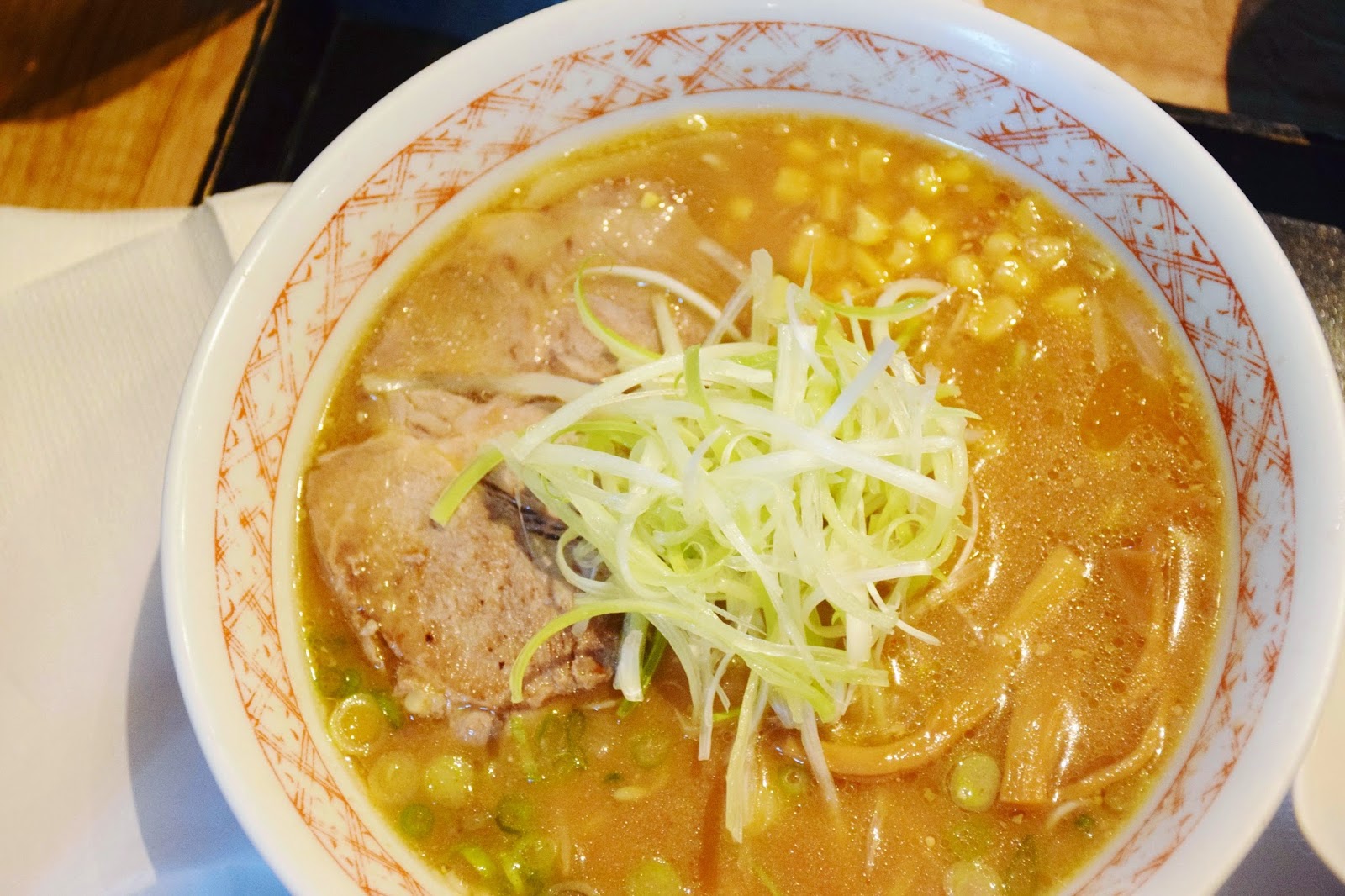 New Generation Miso $10.50 (The picture's kind of squished, click to ENLARGE!)
4/5 stars
Motomachi's take on the classic miso ramen! The fact that they called this "new generation" definitely suckered me in haha. This was indeed different from your traditional miso offering, while the miso flavour was potent, there was an extra "element" that I couldn't exactly pinpoint. The broth was very well done, it was more on the watery side and not as thick as Santouka's version.

The noodles were textually pleasing: al dente, toothsome and with bite. The char siu was oh so tender, with a robust meaty flavour.The ramen also came with 2 slices of char siu, corn, and bamboo shoots, but it was missing the egg. Not a big deal to me though! 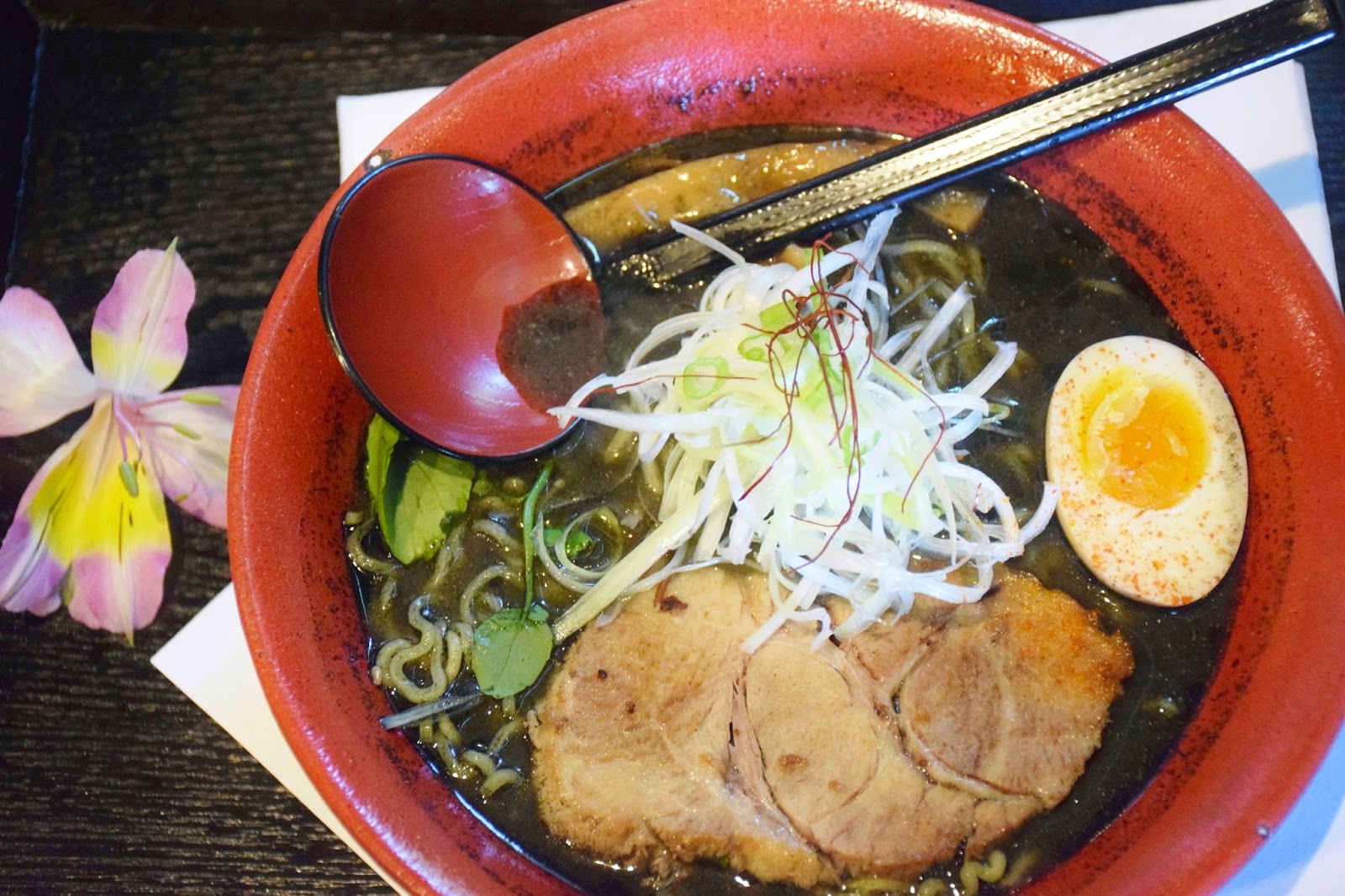 Black Charcoal Ramen $11.50
4/5 stars
This is their most popular ramen, made with black charcoal! It's not as scary as it sounds haha, it's totally edible! It's deep, mysterious, and oh so delicious! The broth has a wonderful unami flavour unlike any other! I could definitely taste a chicken based broth, but it also had a strong fish paste flavour, strangely enough. The noodles take on a green colour after soaking in the broth. The noodles were toothsome textually pleasing, and consitent in quality as the other bowls. The char siu picks up the flavours of the charcoal beautifully, and makes the meat that much more delicious! 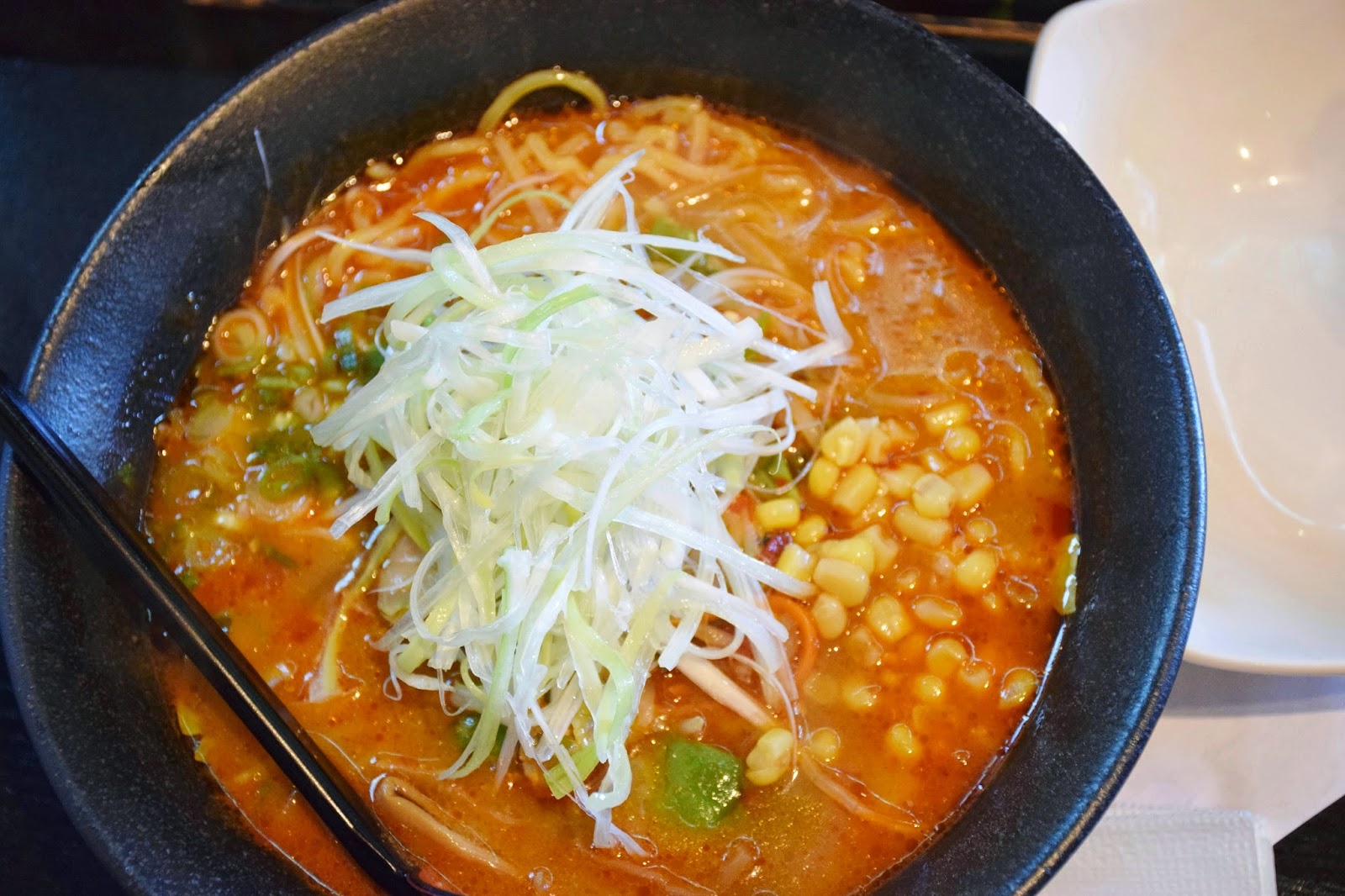 Spicy Miso Ramen $10.50
4/5 stars
According to my grandma, this wasn't all that spicy haha! I took a sup and it was more along the lines of spicy sweet. It was a bit reminiscent of kimchi. The broth was on the lighter side, in comparison to the charcoal ramen. This didn't have instead char siu in it, instead it had chicken strips in it! The chicken was reasonably tender and had soaked up a ton of flavour from the broth. 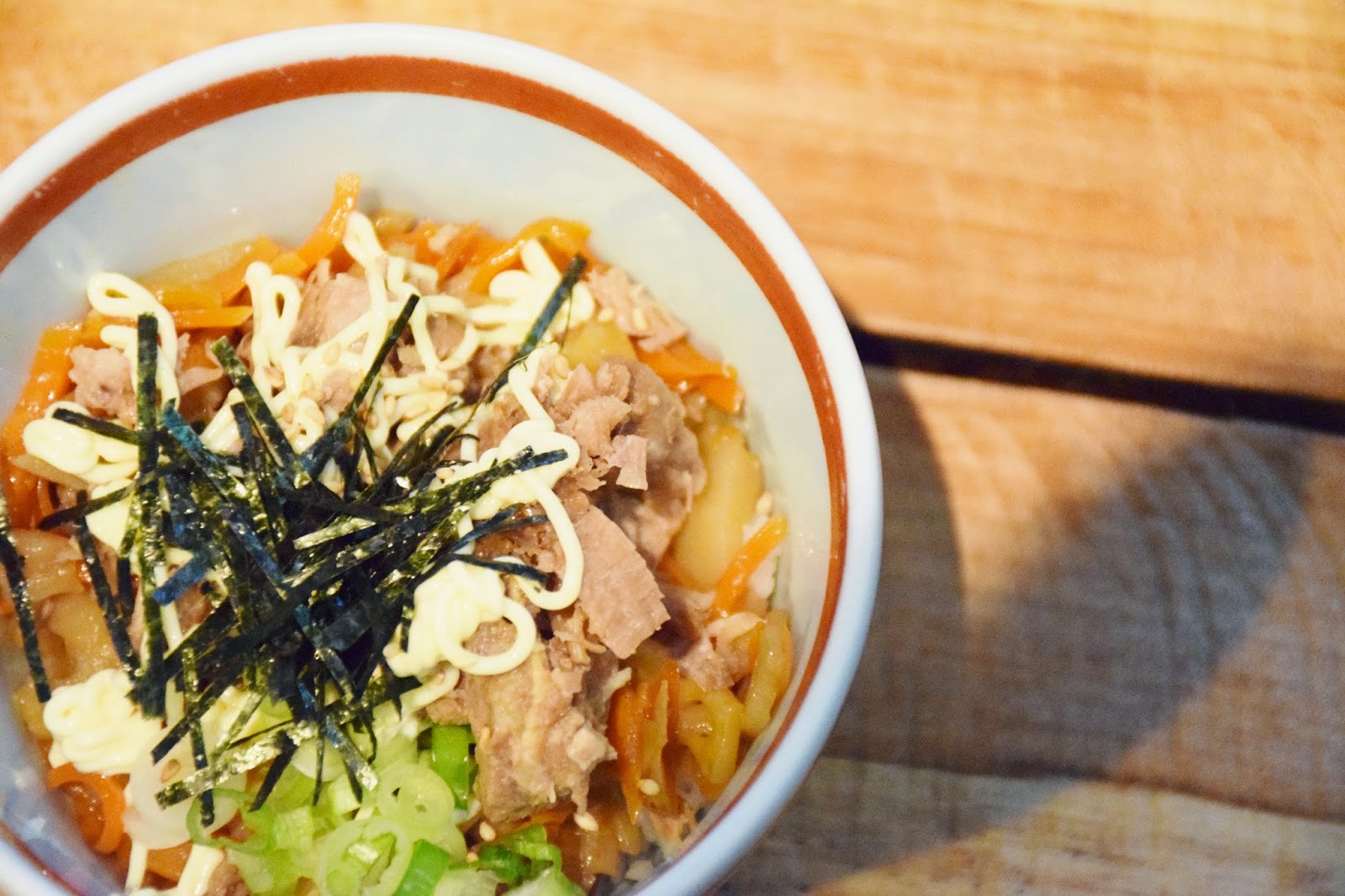 BBQ Pork Bowl $3.50
3.5/5 stars
This was definitely a great deal! For those of you with bigger appetizers you can order this as a side! The dish was very well seasoned,with the marinated veggies adding a punch of flavour. The mayo on top was distinct Japanese mayo, and added a sweet tanginess. The pork was a bit on the dry side but that was alleviated with the addition of mayo for added moisture.