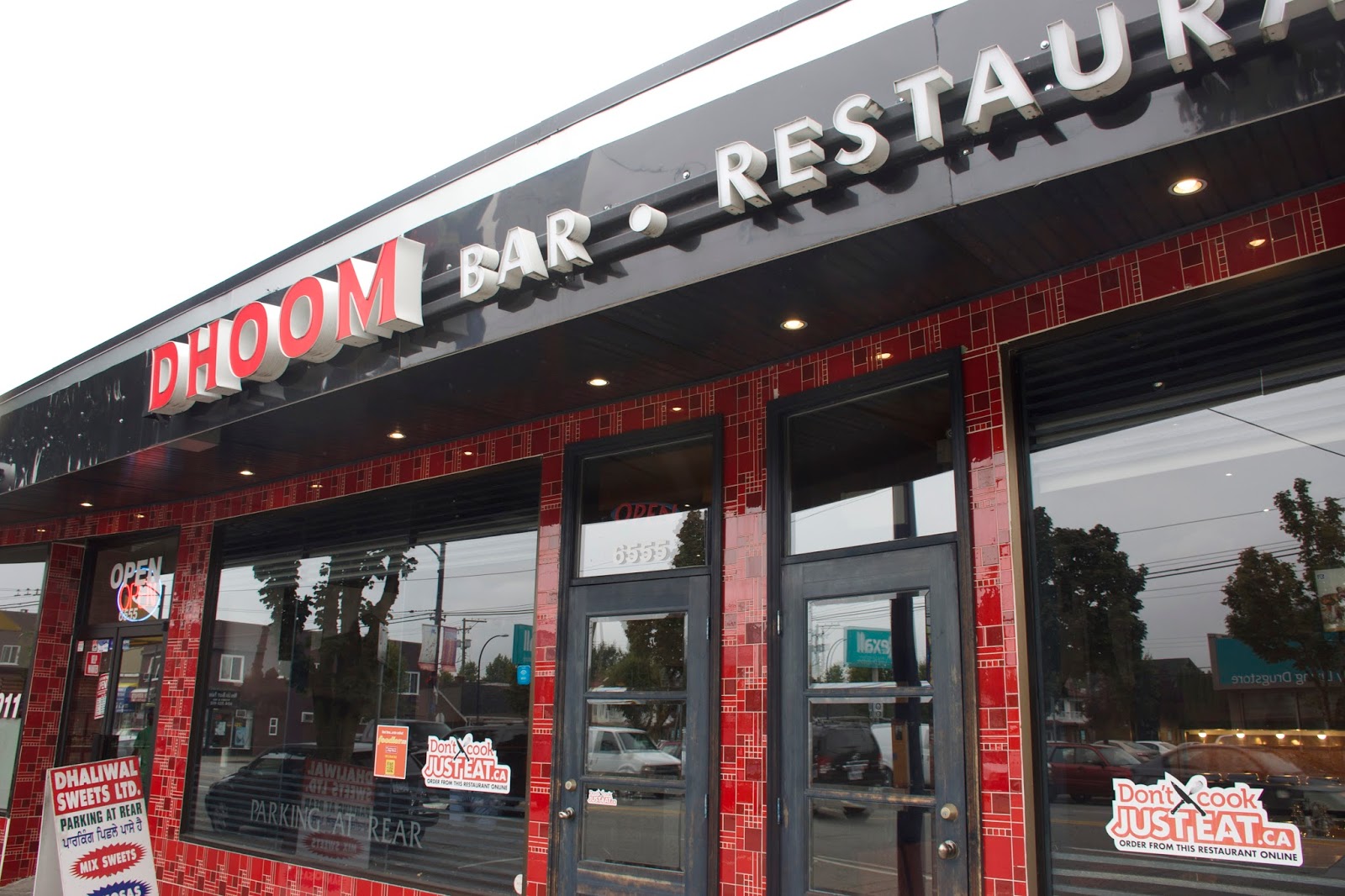 Yes, I went to another Indian Buffet this week LOL. I went to Dhoom because I really wanted to compare it to New Novelty which also offers a similar buffet (which I just recently reviewed) a few doors down! I was originally going to go to Dhoom the day I went to New Novelty, but I left because the tables were really dirty and there was barely any food left in the buffet!

Signature Dishes
Dhoom has another location in Surrey and another downtown! They're famous for their lamb rogan gosh and chai! I probably should have ordered that but I was too famished and couldn't think straight LOL ;)

Service 3/5 stars
The first time I went, the restaurant was packed, but this time, the restaurant was nearly empty! Walking in I directed to the buffet area and I seated myself. During my meal he came over to ask me if I needed anything (after he saw me taking pictures LOL.) Like New Novelty, they give you your own pitcher of water, so you don't have to keep asking for water!

Ambiance - Casual
Dhoom is divided in half - one side for the non buffet eaters, and another side for the buffet eaters! On yelp someone described this place as "fine dining in this neck of the woods!" and I agree! It wouldn't be cnsidered "fancy" downtown, but it's certainly one of the nicer restaurants you'll find in this part of town! They have large, comfy sofas facing the tables and a tv on wall playing indian soap operas LOL.

Value - Good
I find Dhoom and New Novelty similar in quality. For $12, it wasn't bad, but if I had to choose one over the other, I would go with New Novelty (taking price, service, and food into consideration.) The service at New Novelty was significantly better, and I preferred some of their dishes over the dishes at Dhoom. As for value, it just comes down to how much you manage to eat LOL. 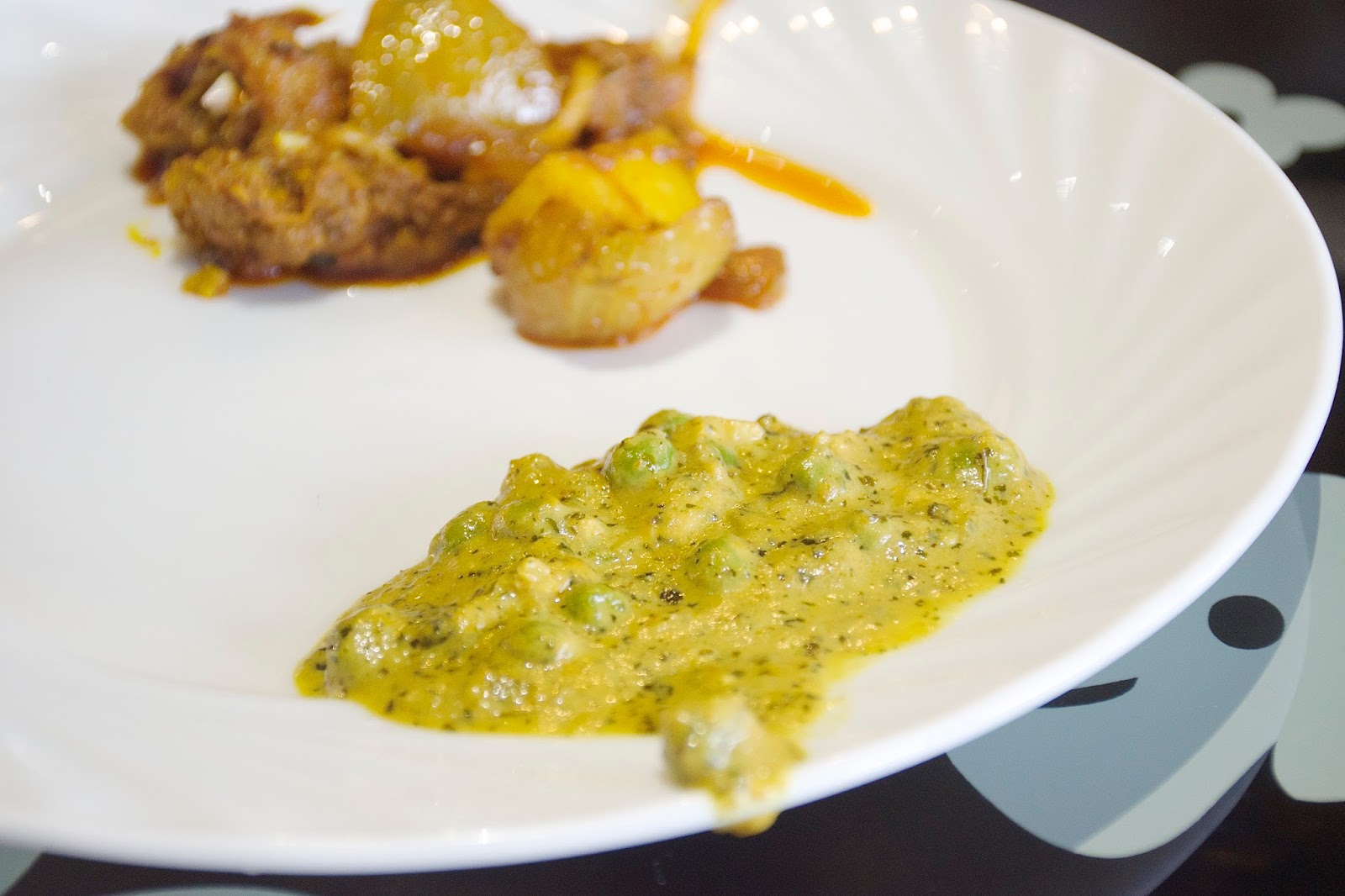 Peas Masala
3.5/5 stars
This was my favourite dish out of everything that I tried! It wasn't spicy at all, it was actually sweet! Texture wise, it was really gloppy, and easy to eat! There was a substantial amount of peas, so I didn't feel guilty eating haha! 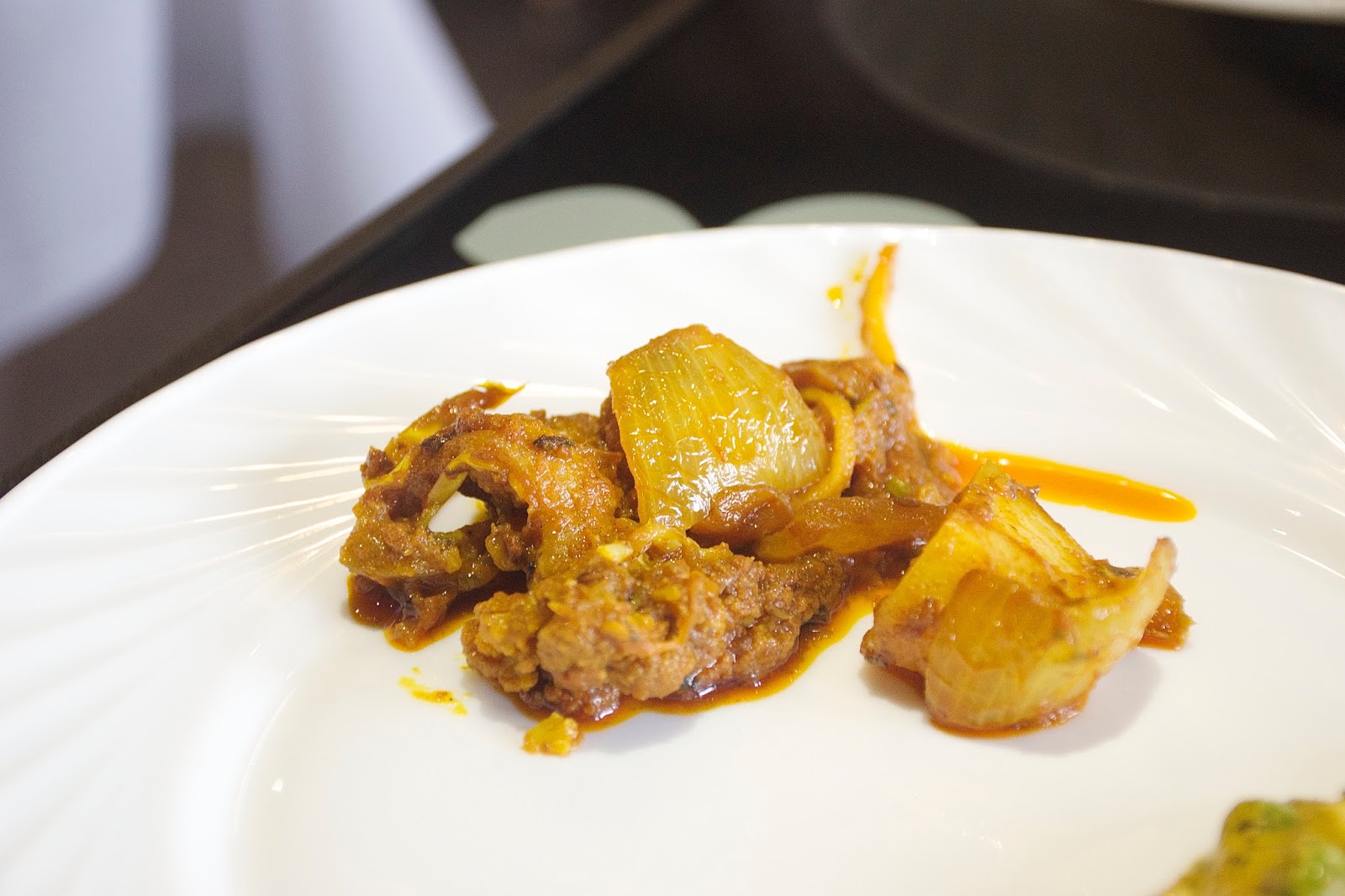 Vegetable Curry
3/5 stars
This had cauliflower, ginger, potatoes, and peppers in it! Surprisingly, this tasted like fries! Really!  The potato flavour really overwhelmed the entire dish. The cauliflower was really mushy and had soaked up all the flavours of the sauce. This was probably the most flavourful and saltiest dish out of the bunch. 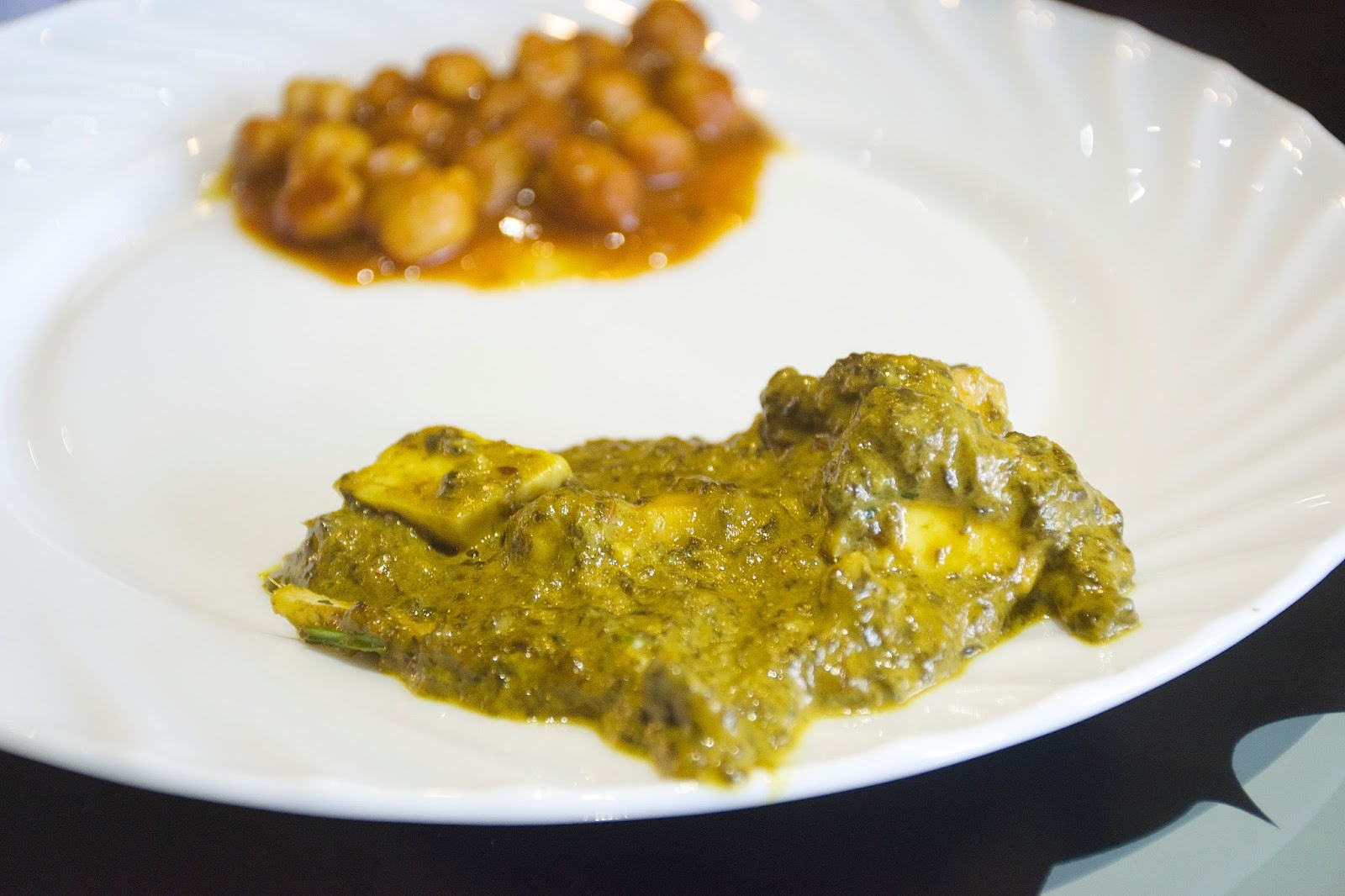 Palak Paneer
2/5 stars
There was so much cheese in this and the pieces were so big! The cheese in New Novelty's version were really small in comparison. The spinach element was really potent, and meshed really well with the flavours the cheese. 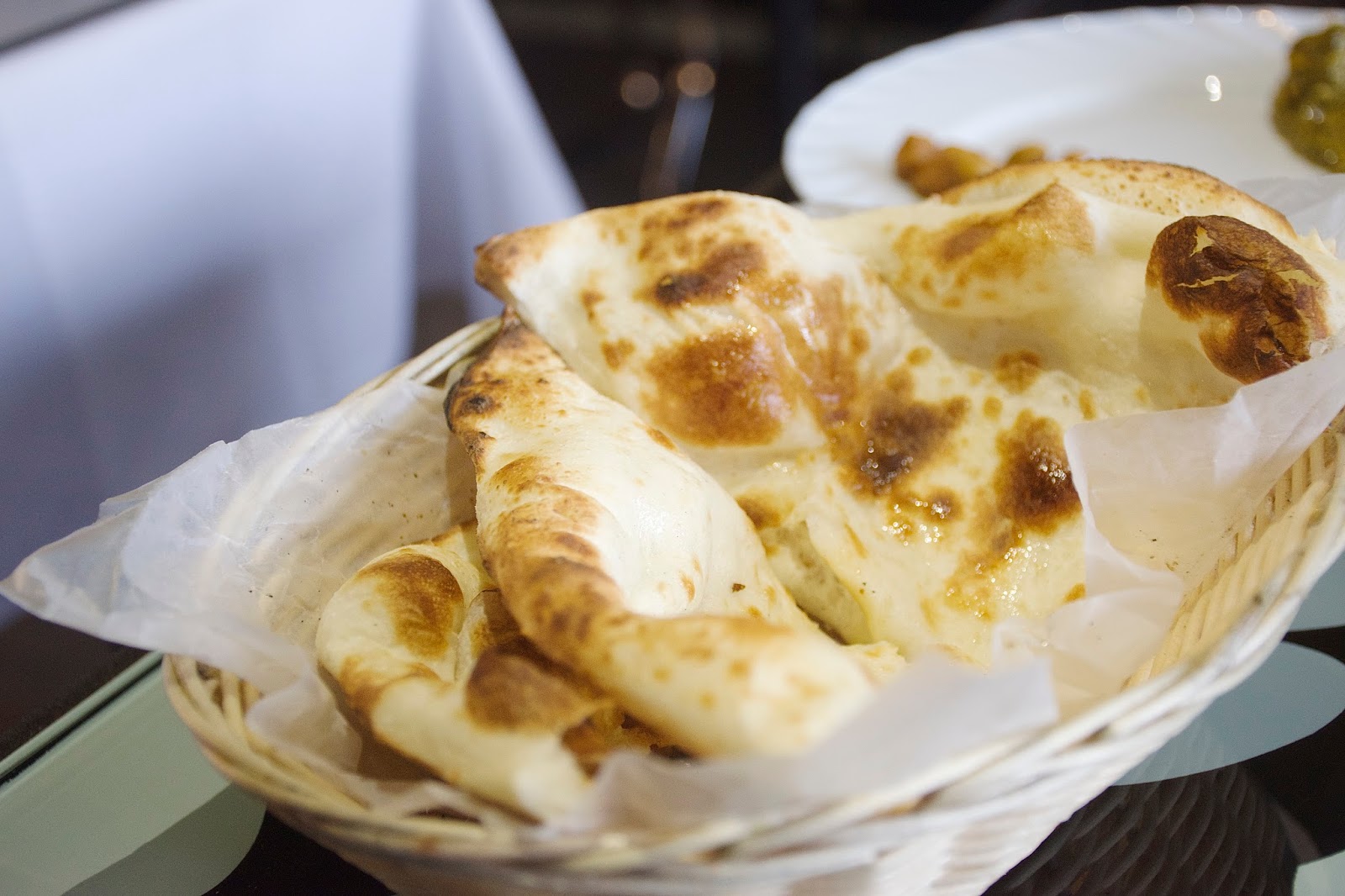 Naan
4/5 stars
I really liked their naan! Like most indian buffets, the naan is made to order so it doesn't get soggy! They gave me 4 pieces for my first order but you can always ask for more! The naan was perfectly springy, soft, bouncy, with a charred exterior. 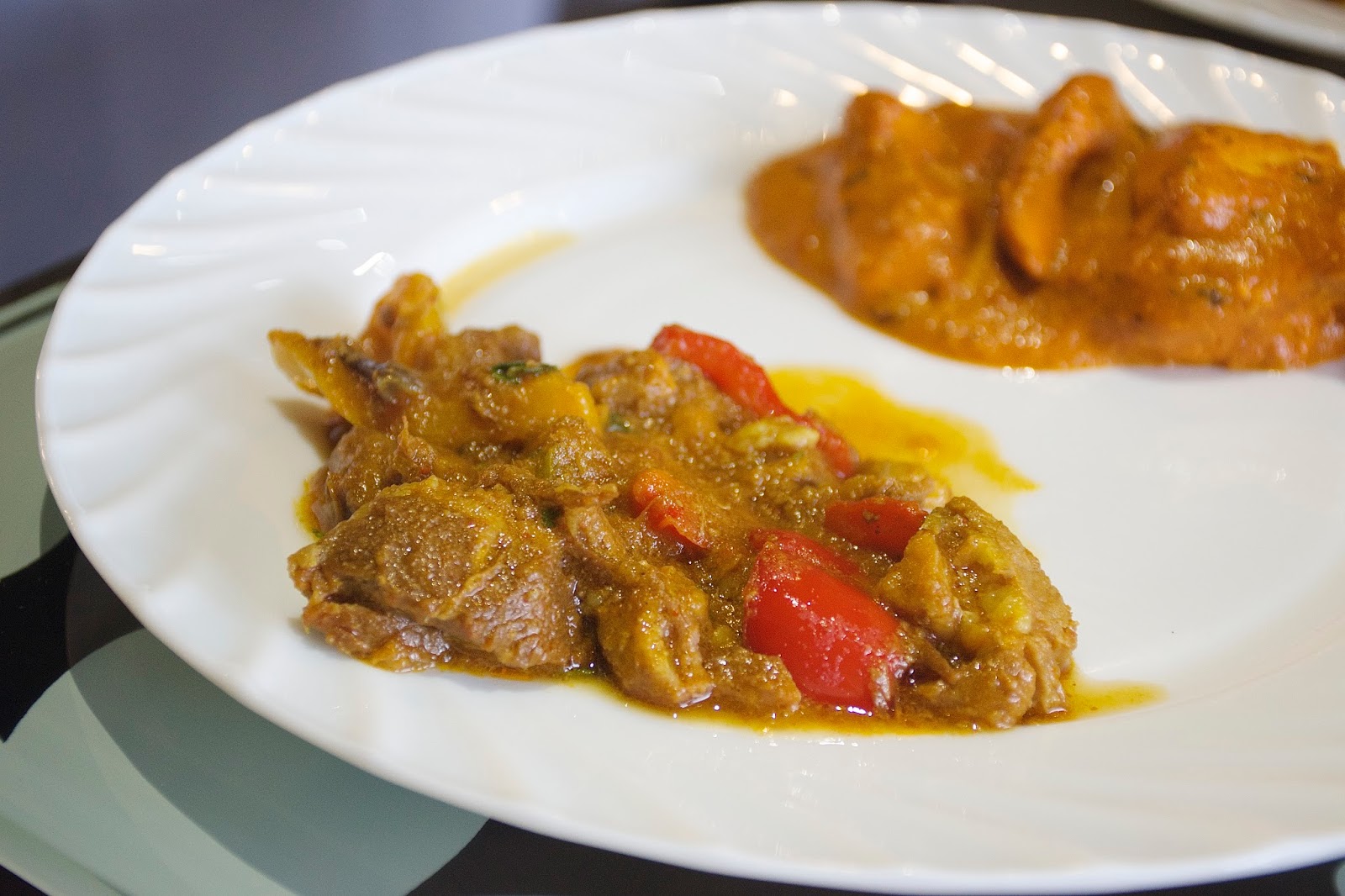 Kerala Beef Stew
2/5 stars
This was really "beefy" tasting LOL. The beef flavour came on really strong. It had a subtle spiciness to it. The beef was reasonably tender and chewy. The entire thing was really mushy (as you can tell from the picture haha.) 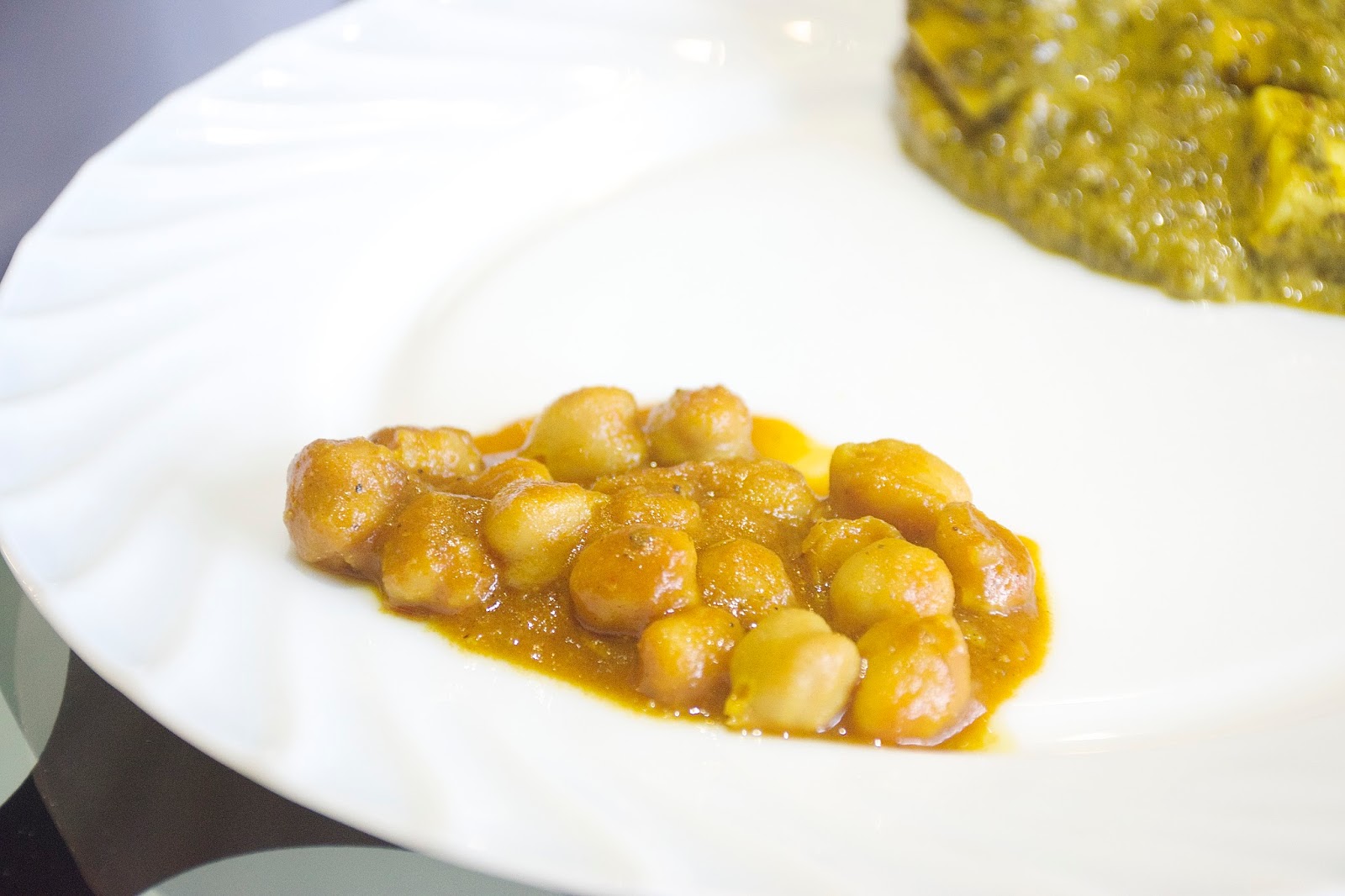 Chicken Masala
2/5 stars
This was my second favourite dish! It was full of flavour, and subtly spicy. The chicken peas still retained their crunch and didn't get soggy from the sauce! 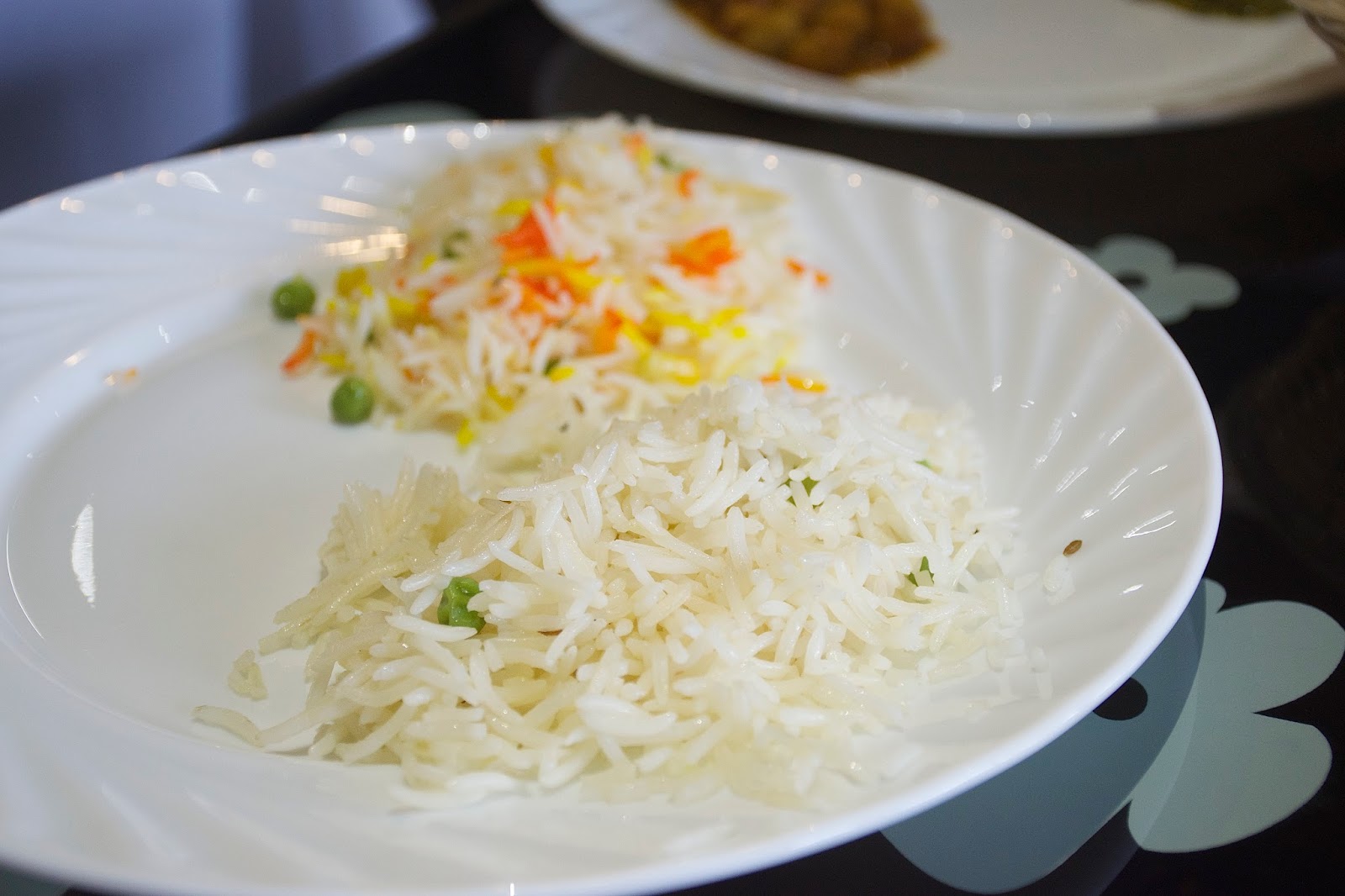 Basmati Rice
1/5 stars
I definitely prefer the rice over at New Novelty's. This was dry and wasn't fragrant at all! It kind of reminded me of Uncle Ben's LOL. In comparison New Novelty's version is really fragrant and has a spice to it. 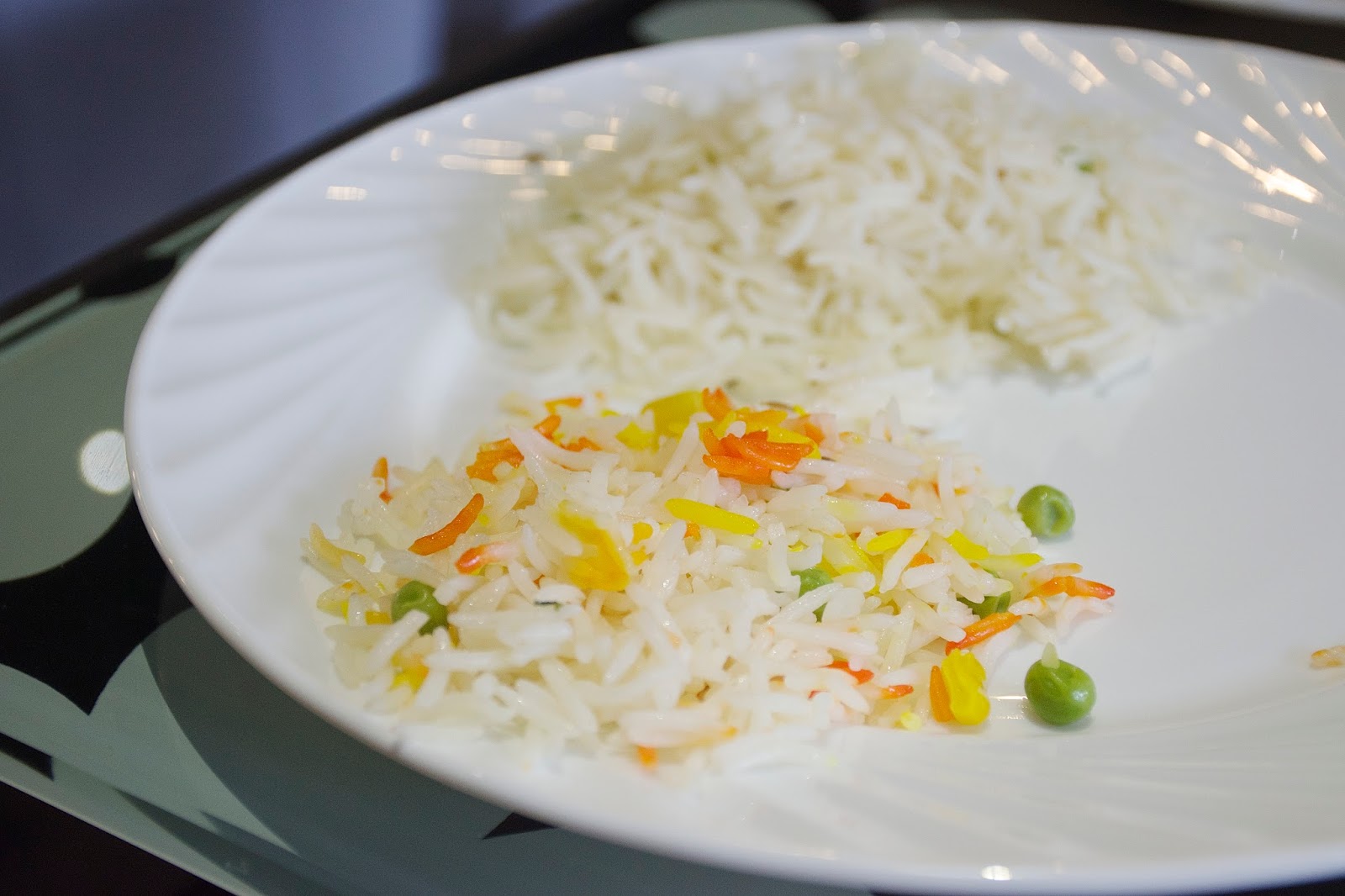 Basmati Rice
1/5 stars
Basically the same as the plain rice but this one had corn, peas, and carrots in it! The veggies tasted predictably like frozen veggies, and didn't really add much to the rice. 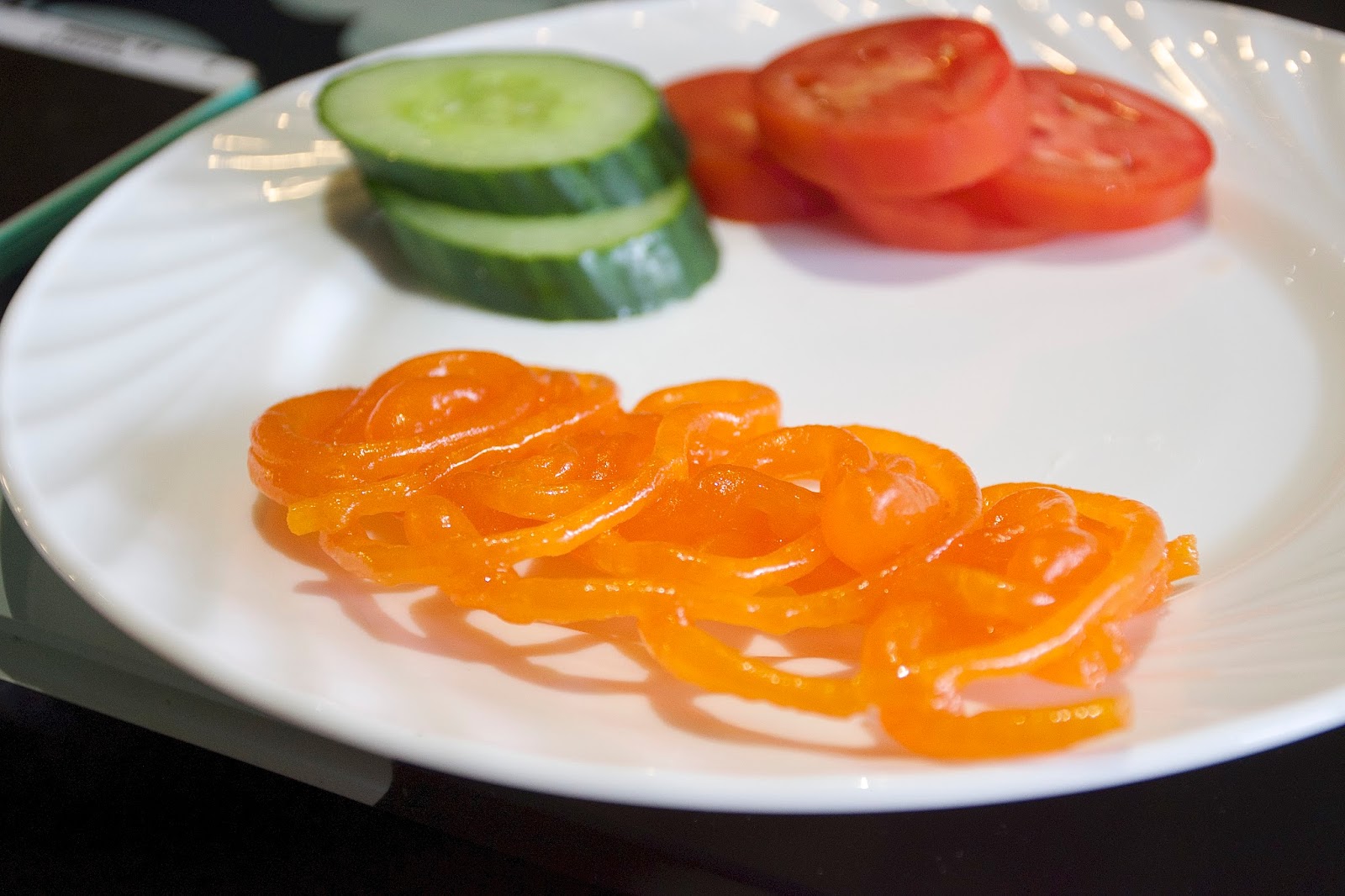 Jalebi
2/5 stars
Dhoom's jalebi is noticeably "stringier" and thinner than New Novelty's. It was crunchier and sweeter too! 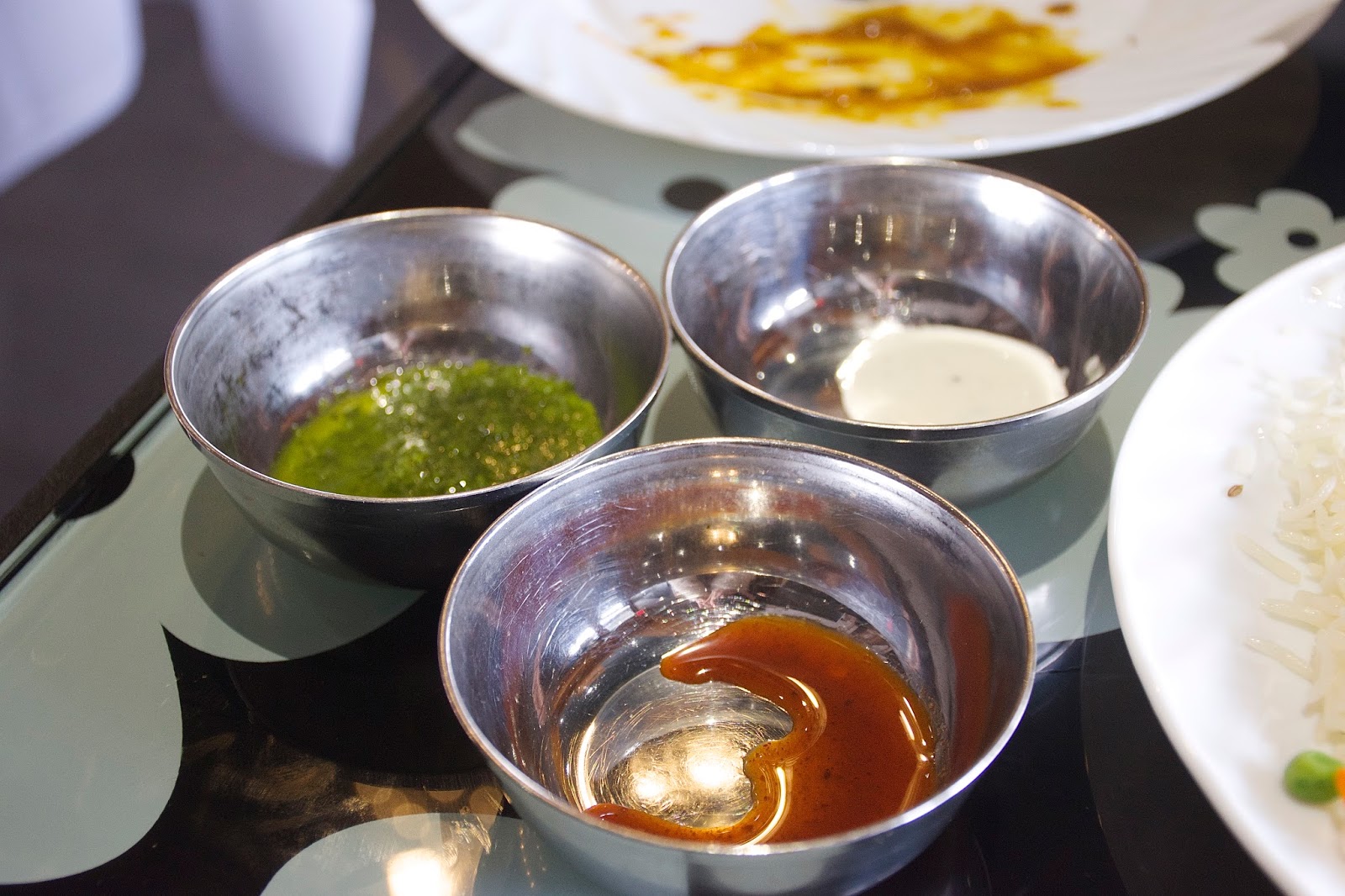 Various Sauces
They also had raita, chutney and hot sauce on the side for you to dress your salad with or dip your naan in! 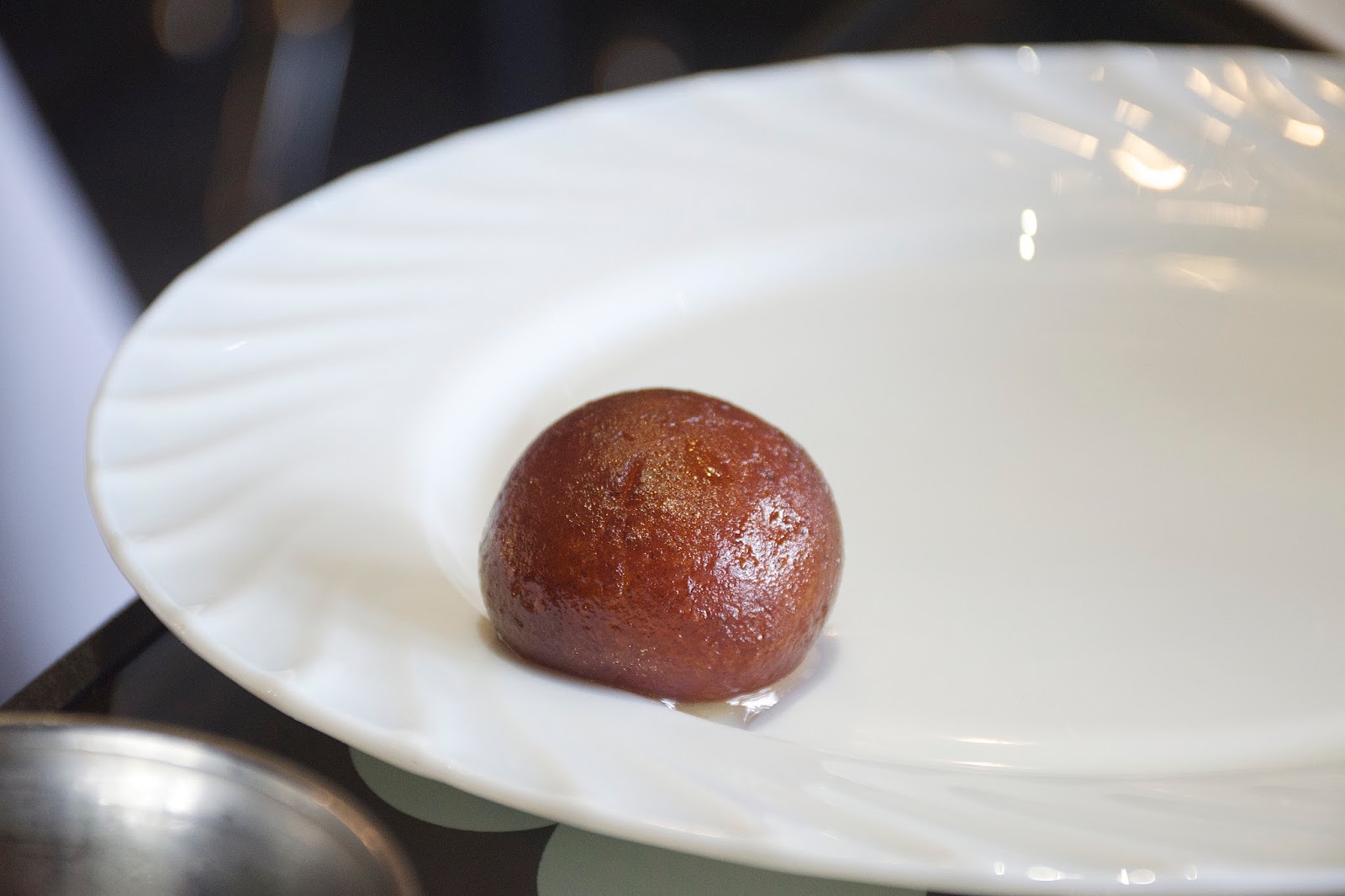 Gulab Jamun
3/5 stars
Gulab Jamun is basically dough soaked in syrup! It's really sweet and soft in texture! It's like a doughnut...but soggier LOL. If I wasn't so stuffed I probably would have eaten more of these! ;) 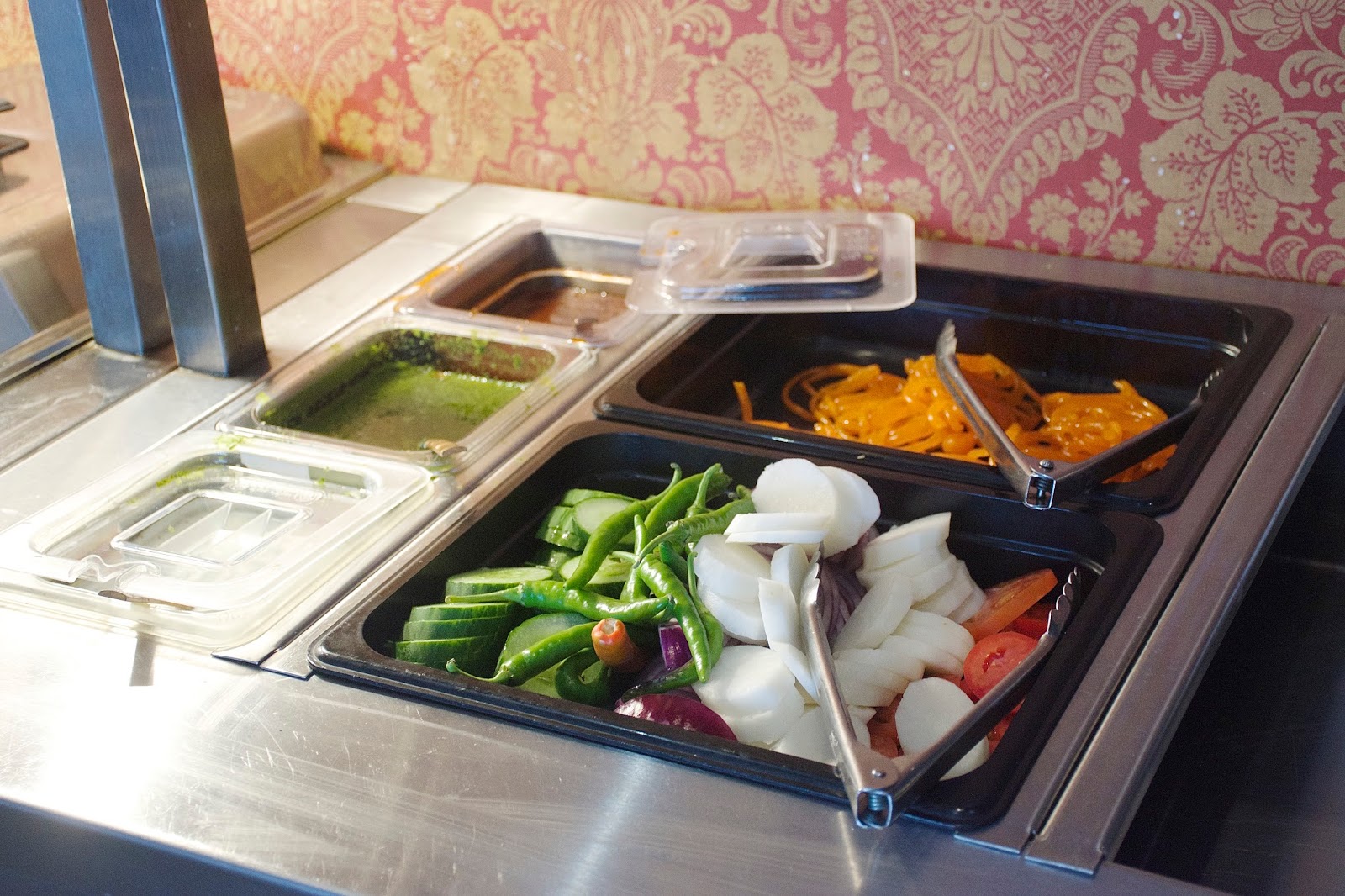 The Verdict
After trying both Dhoom, and New Novelty, I have to say I prefer New Novelty. Not only is it cheaper, I find the buffet tastier, and service is great too! But if you're ever in the Sunset area looking for an Indian buffet, you really can't go wrong with either!