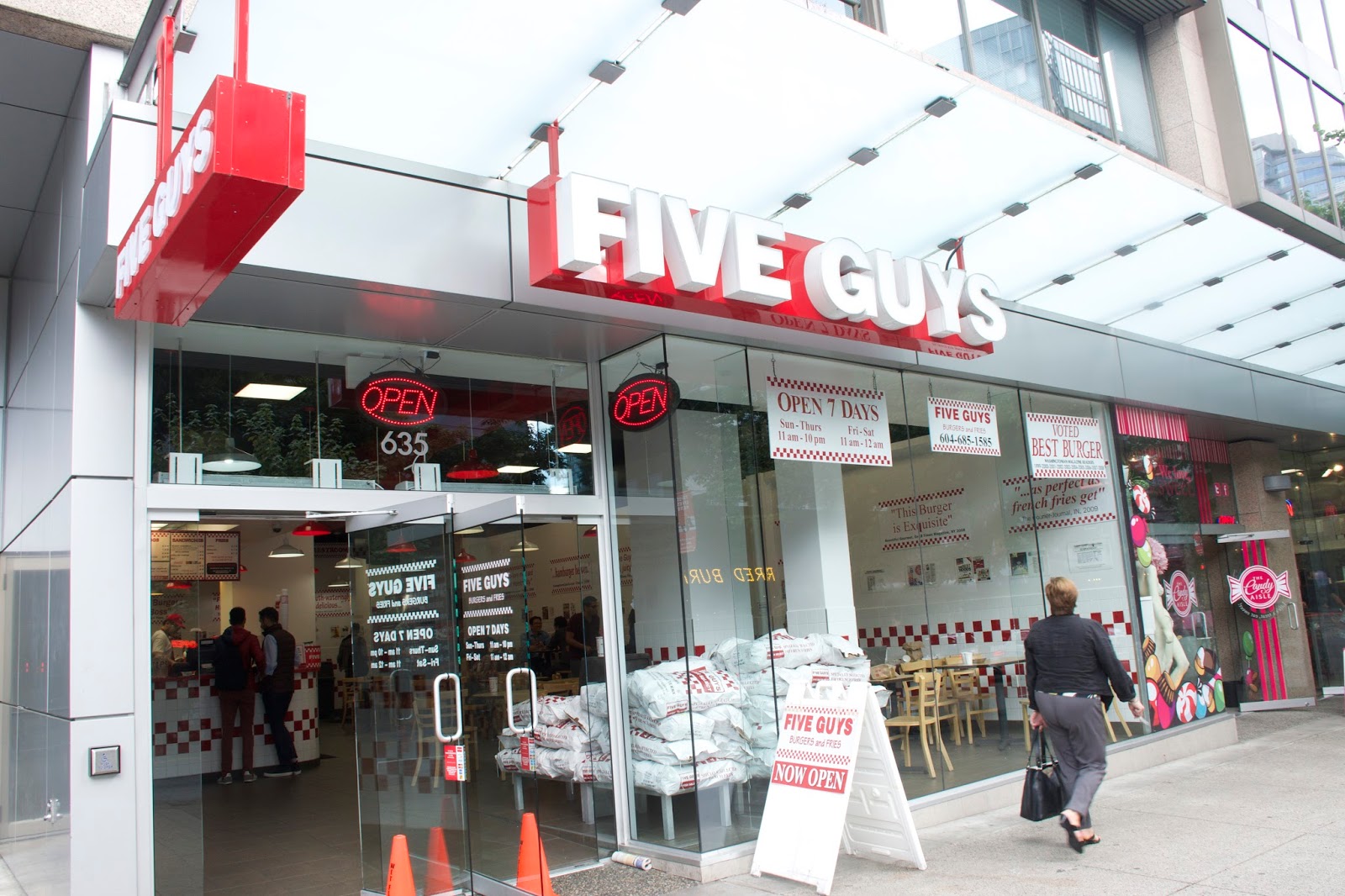 Sometimes you just a need a burger. A meaty, 2 handed, sloppy burger that requires you to have a bottomless amount of napkins on hand. Yesterday was one of those days. I've been itching to try out Five Guys for the longest time because I heard that they're similar to In n' Out. I have yet to try the legend that is In n' Out Burger. Tell me guys, does In n' Out really live up to the hype?

Signature Dishes
Five Guys prides itself on using fresh ingredients and not freezing any of their food! They use fresh ground beef for their patties and fresh cut potatoes for their french fries! They're famous for their burgers, and aren't shy about announcing it. They have signs on the wall that read "Voted Best Burger" "Perfection in French Fries" "Heaven on a Bun" you get the deal.

Service
Five Guys is a fast food restaurant, so you basically order at the counter and go to the back to pick up your order. They call the number on your receipt, so hold on to that!

You also have the option to have your burger cut in half if you're sharing, which is great! If you don't want pop you can get a cup for water at no extra charge.

Ambiance
Five Guys exhibits a  red & white theme throughout. They have bags of peanuts stacked at the front haha. In their washrooms they have this REALLY loud retro music playing, which I thought was pretty funny! Everything was red & white too, even the paper towel roller!

Price - Midrange $$
In comparison to other fast food joints, their prices are average. But depending on where you usually eat burgers (like if you're use to paying $10 for a gourmet burger) you might find them cheap. A little burger comes comes at $5.49 and a Little Bacon Cheeseburger clocks in at $7.29! But freshness comes at a cost right?

Value - Low
Value wise, it's not great. It's pricey for what it is. Sure, they use premium ingredients, but almost $6 for a small burger? I'll have to admit their fries are a good deal though because they add in extra so you actually get quite alot.

635 Robson Street
Cash/Credit/Debit
Five Guys has various locations throughout the GVR but I went to their Robson location downtown! 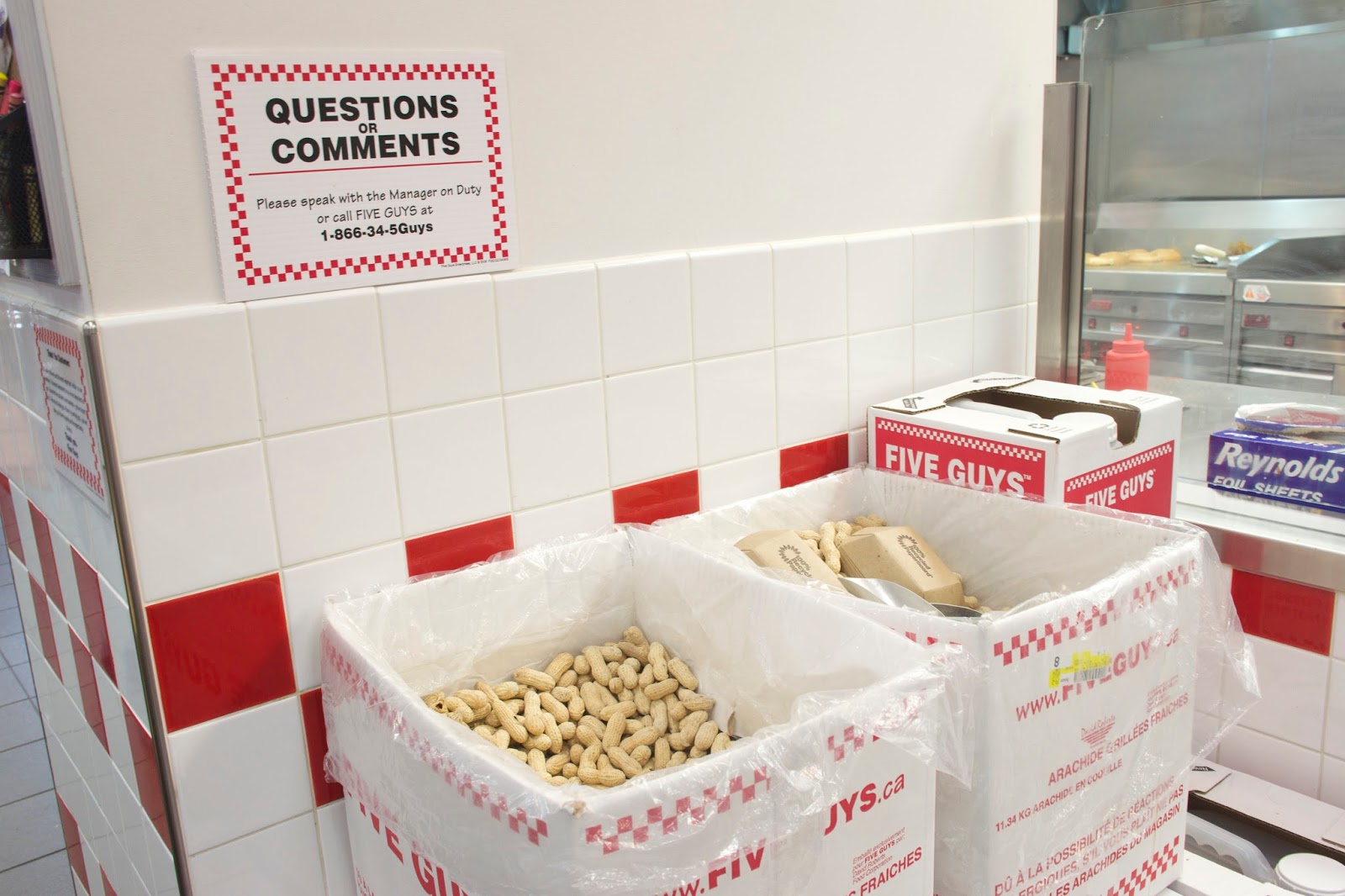 Yayy free peanuts! They have little containers and you can take as many as you like! 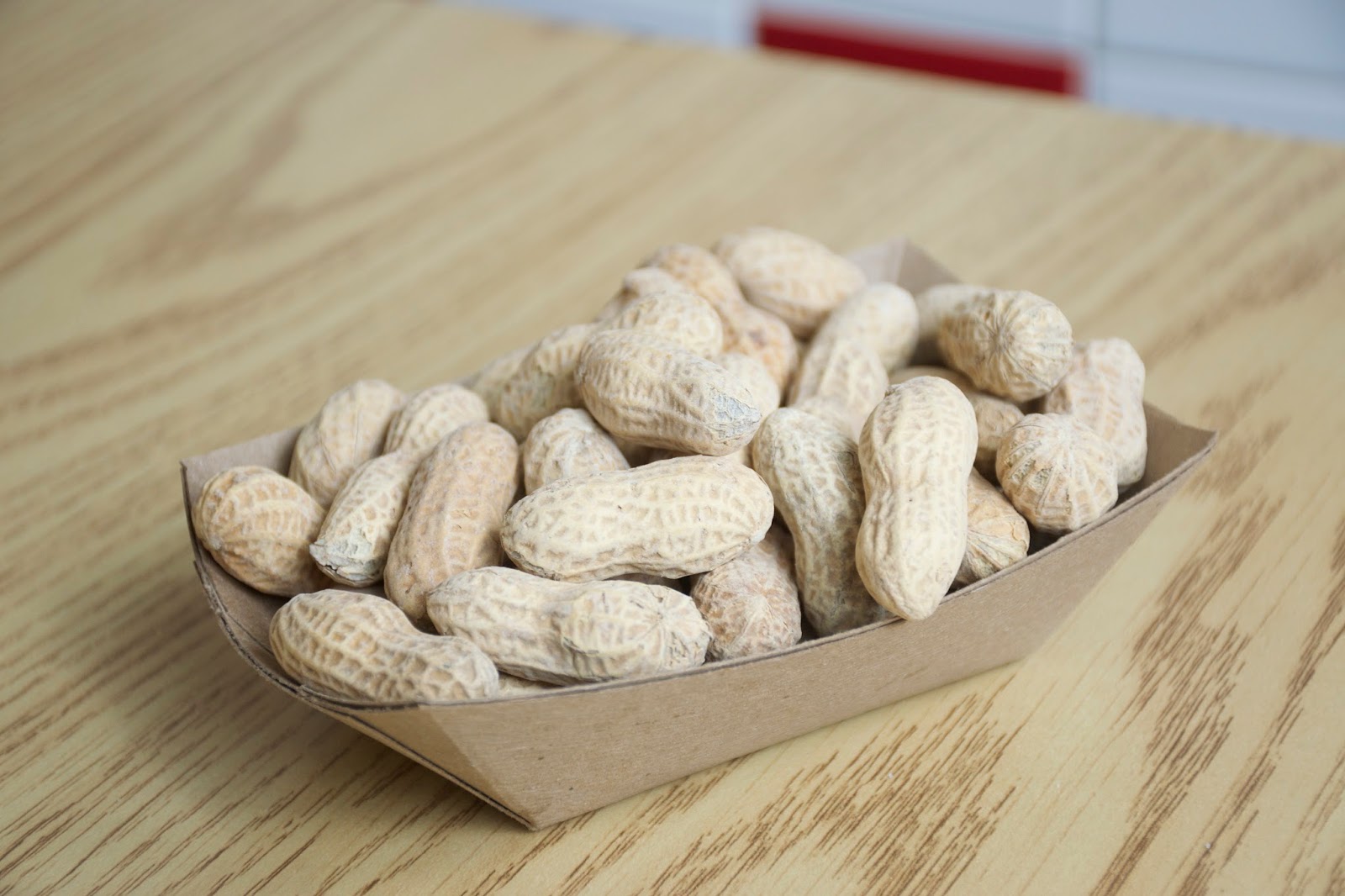 Peanuts
3/5 stars
I have a peanut allergy, so I didn't get to try this but my mom said that these were great! They were lightly salted on the outside and perfectly roasted! 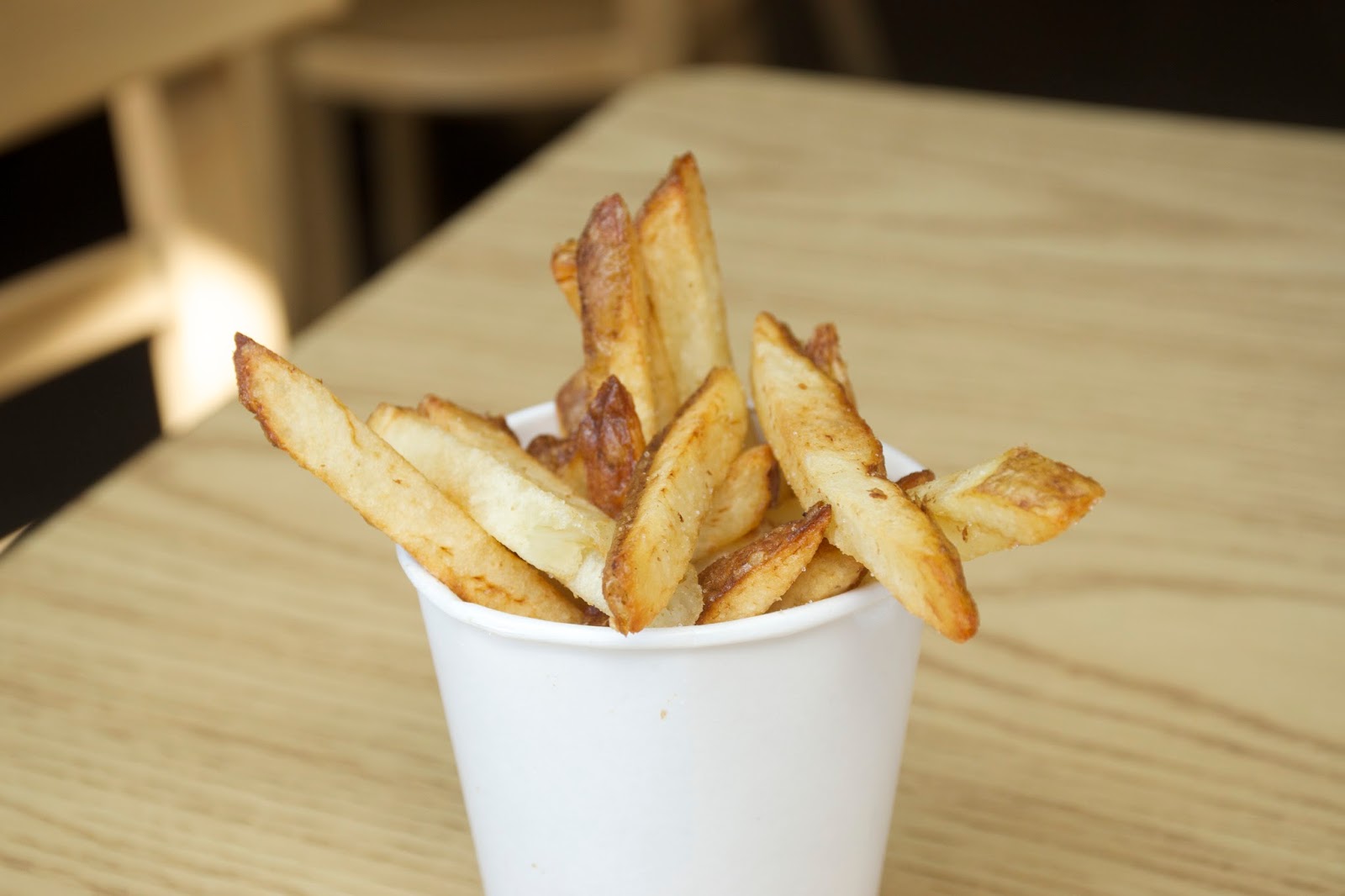 Little Fries $3.50
4/5 stars
Five Guys uses peanut oil for their fries, but weirdly enough, I wasn't allergic to these. I read on a forum somewhere (I know, I know, DON'T trust the internet!) that some people who are allergic to peanuts aren't allergic to peanut oil. But exercise extreme caution people, because I don't want to be held accountable for any allergic reactions!

Wow, I had a brain fart when I was ordering. I meant to order their cajun fries but totally FORGOT and didn't realize until I got home. I guess I was too hungry haha! I guess I'll have to go back for those! So I ended up with their regular fries. These were still really good nonetheless! They were crispy and slightly charred at the edges, and sprinkled with a liberal amount of salt. They have a definite potato-ey taste to them, unlike the fries at other fast food establishments *cough cough* McDonalds. 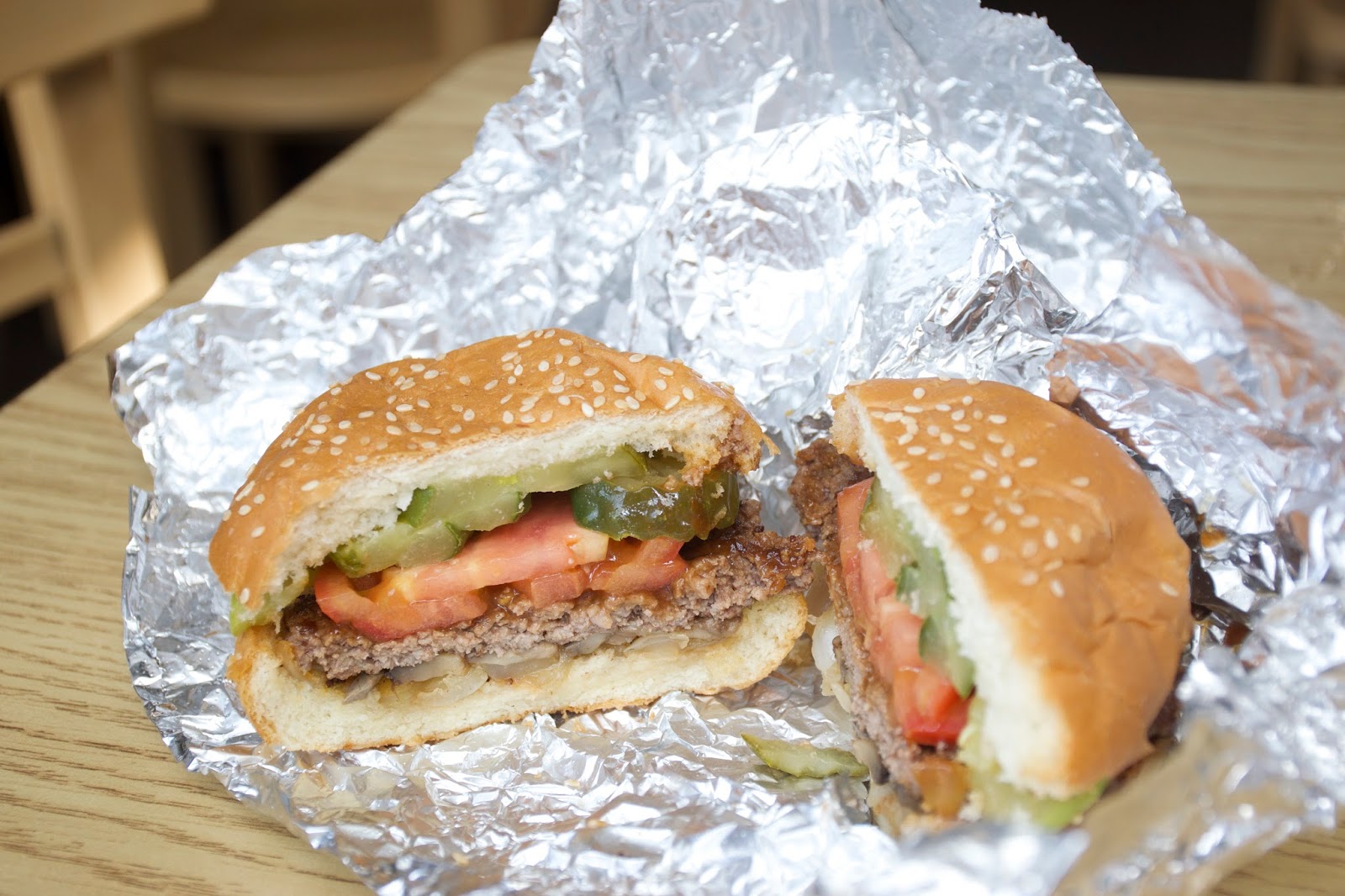 Little Burger w/ Pickles, Tomato, Mushrooms, Onions, A1 Sauce
3/5 stars
What makes five guys different from their competitors is their selection of toppings. You can get as many as you want or as little as you want. They have two burger sizes "little" and "regular." They also have some hotdogs and sandwiches (but let's be honest, who eats those at Five Guys anyways?) haha

You can ask them to cut the burger in half if you're sharing or if you don't want to end up with a mess on your hands! The burger was yummy. Was it the best? In my opinion, no. Yes, it had all the makings of a good burger, but it just didn't blow me away. You could definitely taste the freshness though. But I found the toppings to overwhelm the meatiness of the patty. The pickles were great though, they had a definite "zing" to them. The onions/mushrooms were a nice touch. The A1 Sauce tasted like BBQ sauce, but sweeter. The bun itself was a bit deformed and kind of squished. But I'm not picky about details like that, so I didn't mind.

You can get their toppings "all the way", which includes all of the below: 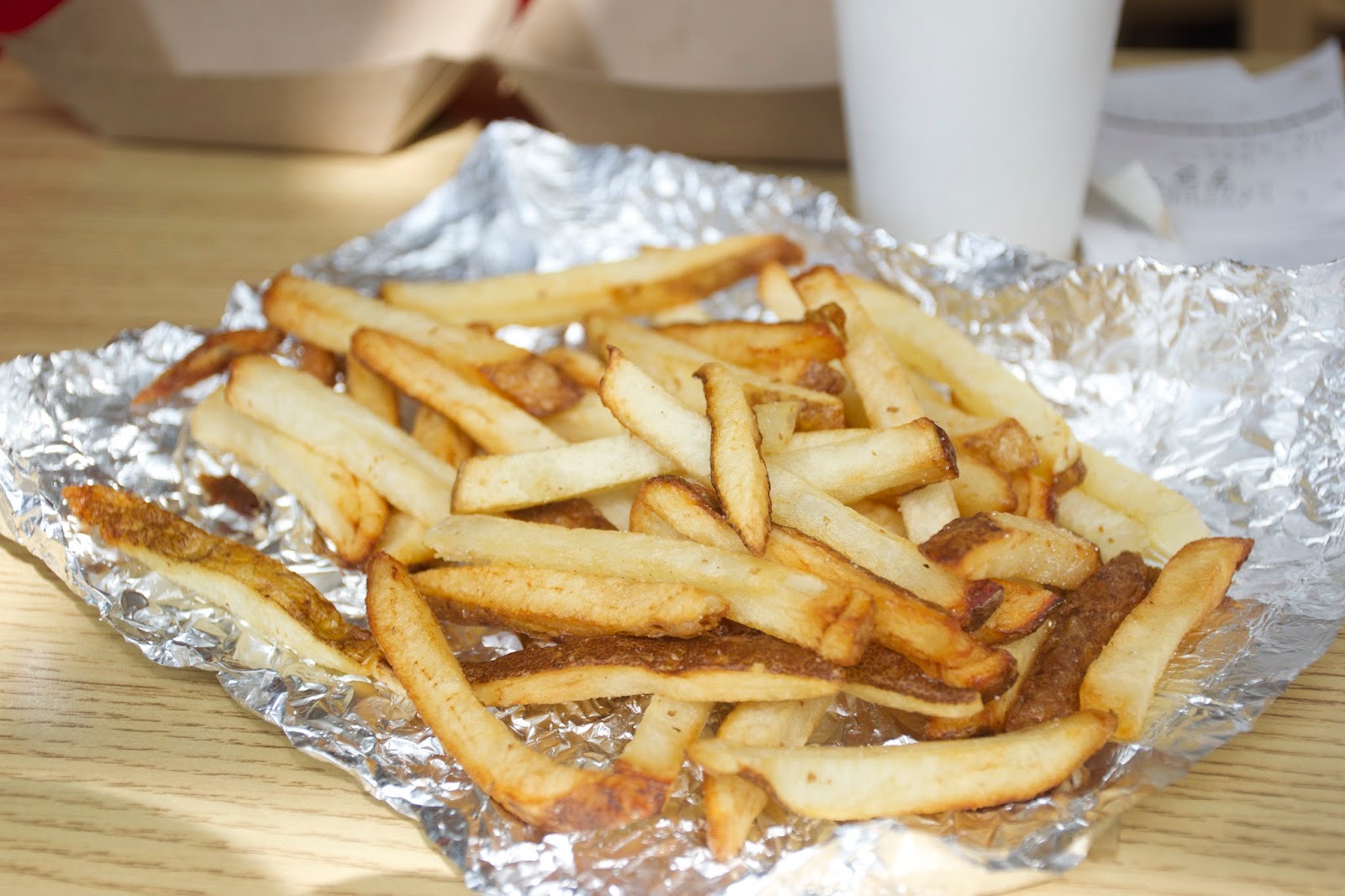 I ended up ordering another order of their fries hehe, because they were so delish!

The Verdict
There's no doubt that Five Guys knows burgers. Is it worth the price? That's debatable. But if you're looking for a solid burger joint all around, Five Guys won't let you down. The free peanuts don't hurt either. :)