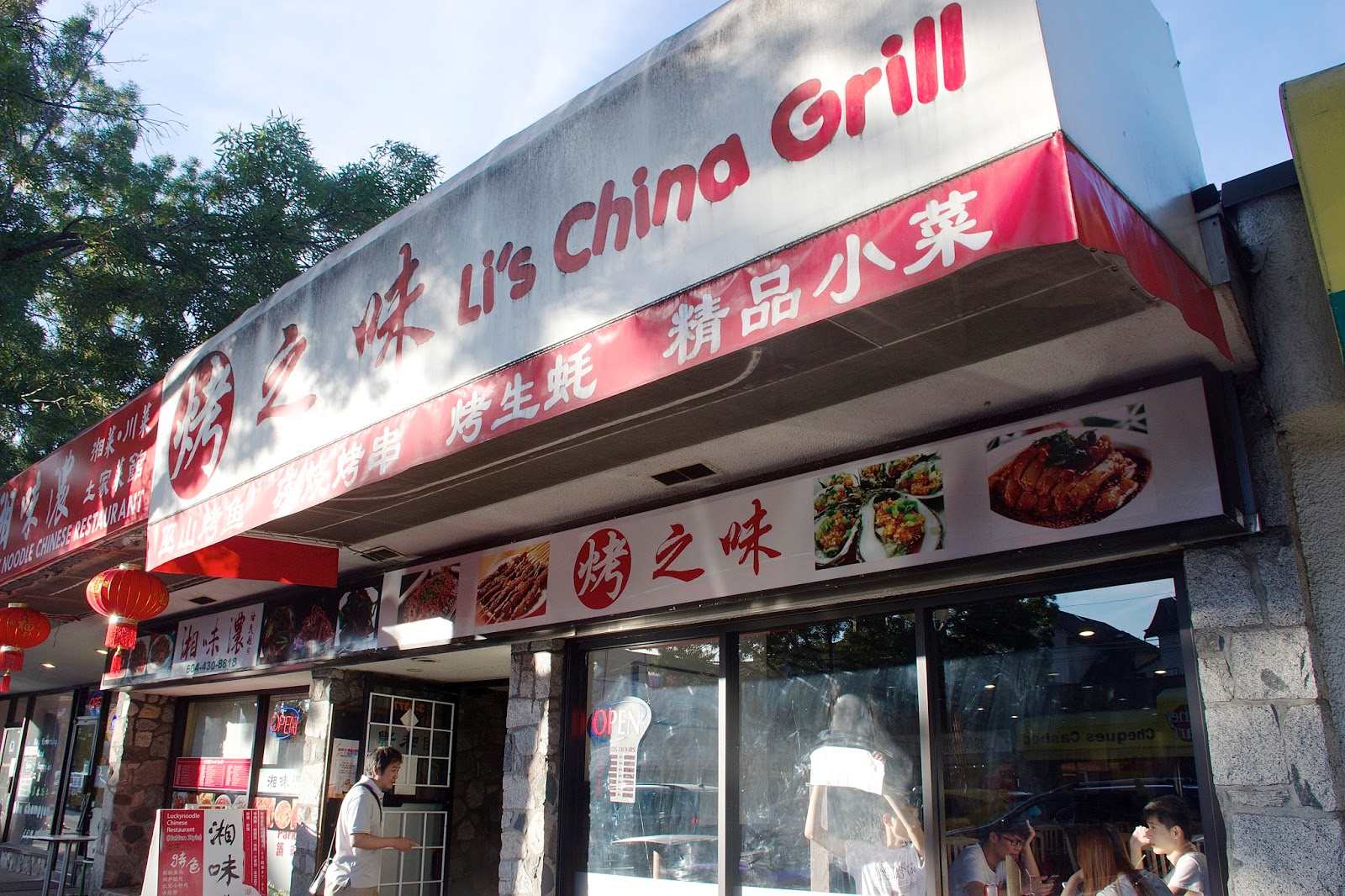 Sooo, is this where all the rich asian kids hang out? ;) I'm assuming most of you guys live in the GVR, if so you've probably seen an iradescent PURPLE lambourghini with an orange outline driving around town LOL. The last time I saw that car was on the highway, to Richmond haha. Well yesterday, that same car was parked outside of Li's!

Walking into Li's, there was not one single person over 30, except for my dad haha! Everyone there looked like they were all in their twenties and they were all dressed really trendy (spiked louboutins, designer bags and all.) My dad called them "Dad's money!" LOL. Not going to lie, I was a bit intimidated lol. I'm just a meek, backpack toting, nerdy looking asian girl with wide rimmed glasses!

Signature Dishes
Li's signature dish is their grilled fish! They have different kinds: Catfish, Lingcod, Skate Fish, and Rockfish, which all retail for $13/lb, which comes to about $35 per fish. You can also choose the sauce that goes on your fish: Sichuan Spicy Style, Spicy and Chinese Spice, Hunan Chopped Chilli Sauce, Spicy Garlic Sauce, Black Bean Sauce, or Pickled Hot Pepper.

But my dad thought it was too expensive haha and he said "I'll take you to Sun Sui Wah another day to eat Alaskan King Crab," LOL and I was like "But it's more expensive," and he said "But it's worth it, this isn't." Yes, I was disappointed. I had specifically come to Li's to try it! Every table had one. $35 isn't a problem for someone who drives a lambo haha! Oh well, I wasn't going to be a brat about it! :)

Service
The service can be best described as "okay." They did their job, nothing more, nothing less. They didn't smile while taking our order but they were patient and answered all of our questions. They brought over extra rice & tea upon request. I did notice that other tables were brought over a container to put their skewer sticks in and we weren't.

Ambiance
Walking in, you're hit with a really overbearing smell of Szehuan spices. The ceilings are low, and the air circulation isn't that great. The decor is really simple with basic tables/chairs lined up against the wall, with a few larger tables in the centre. They also have some booths facing the windows for parties of 4.

Price - Midrange $$
Other than their fish, all of their other dishes are fairly affordable, clocking in at around $5 to $15 per dish. Their BBQ items start at 99 cents and go up to $3.99. If you're looking to save money ordering 3 or so dishes should only cost you around $25.

Value - Okay
The portion sizes for their BBQ items are a bit small, but for their other dishes you get quite a substantial amount! Overall, just okay value for the money. Not terrible, but certainly not "great." 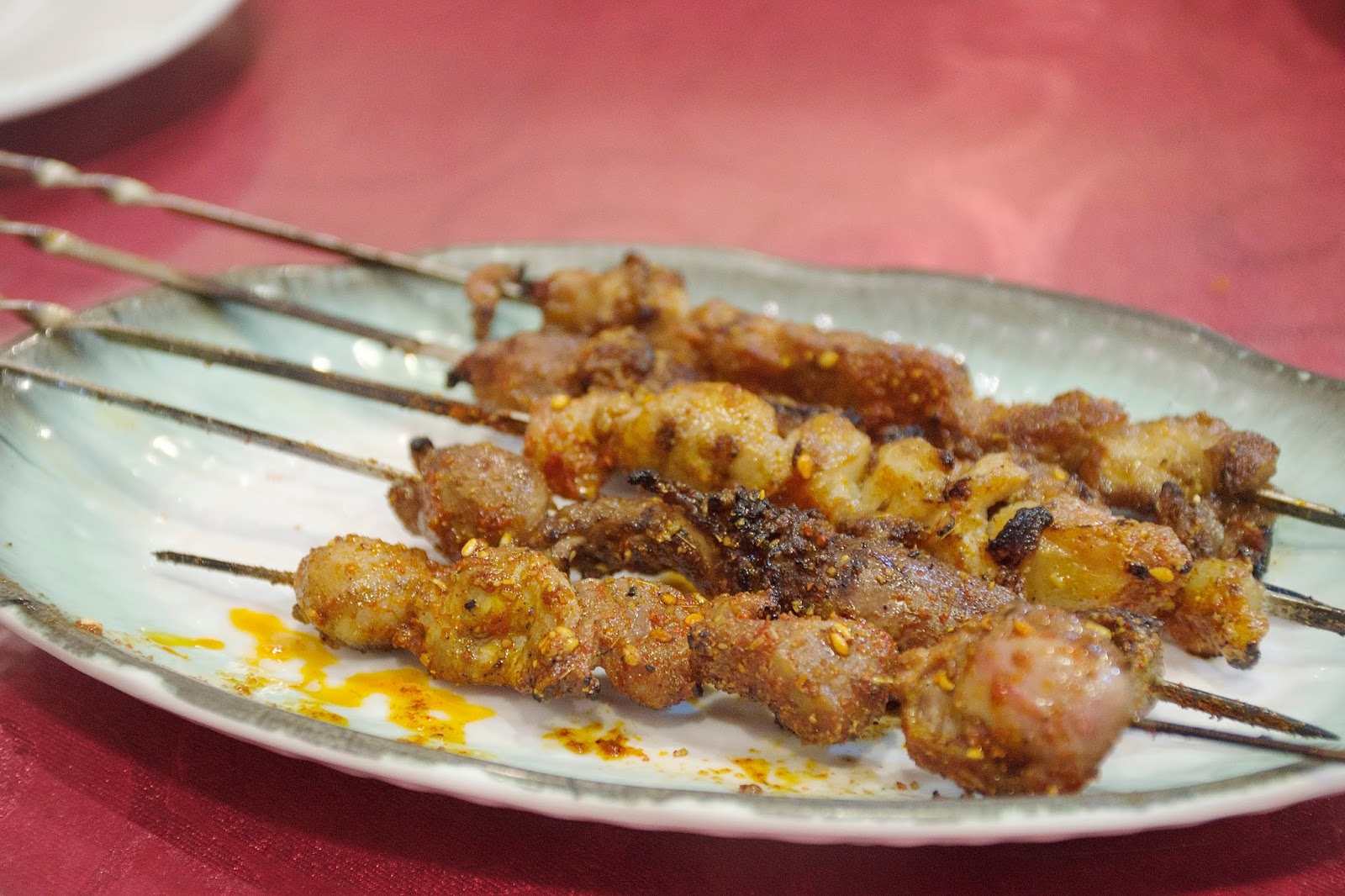 Lamb, Chicken Heart, Chicken Skin 99 cents each
Lamb 3.5/5 stars
Chicken Skin 3.5/5 stars
Chicken Heart 2/5 stars
These were all dosed with a concoction of cumin, pepper, salt, and chilli pepper. Simple, but delicious! Even though they all had the same seasoning, each meat still tasted different, with it's varying flavours and textures. The lamb, well tasted like lamb. All the flavours had fully penetrated into the meat. The chicken skin, as you can imagine, had this almost "slimy" like texture to it, which I strangely enjoyed haha! The chicken heart was well, a bit grainy and hard to chew. 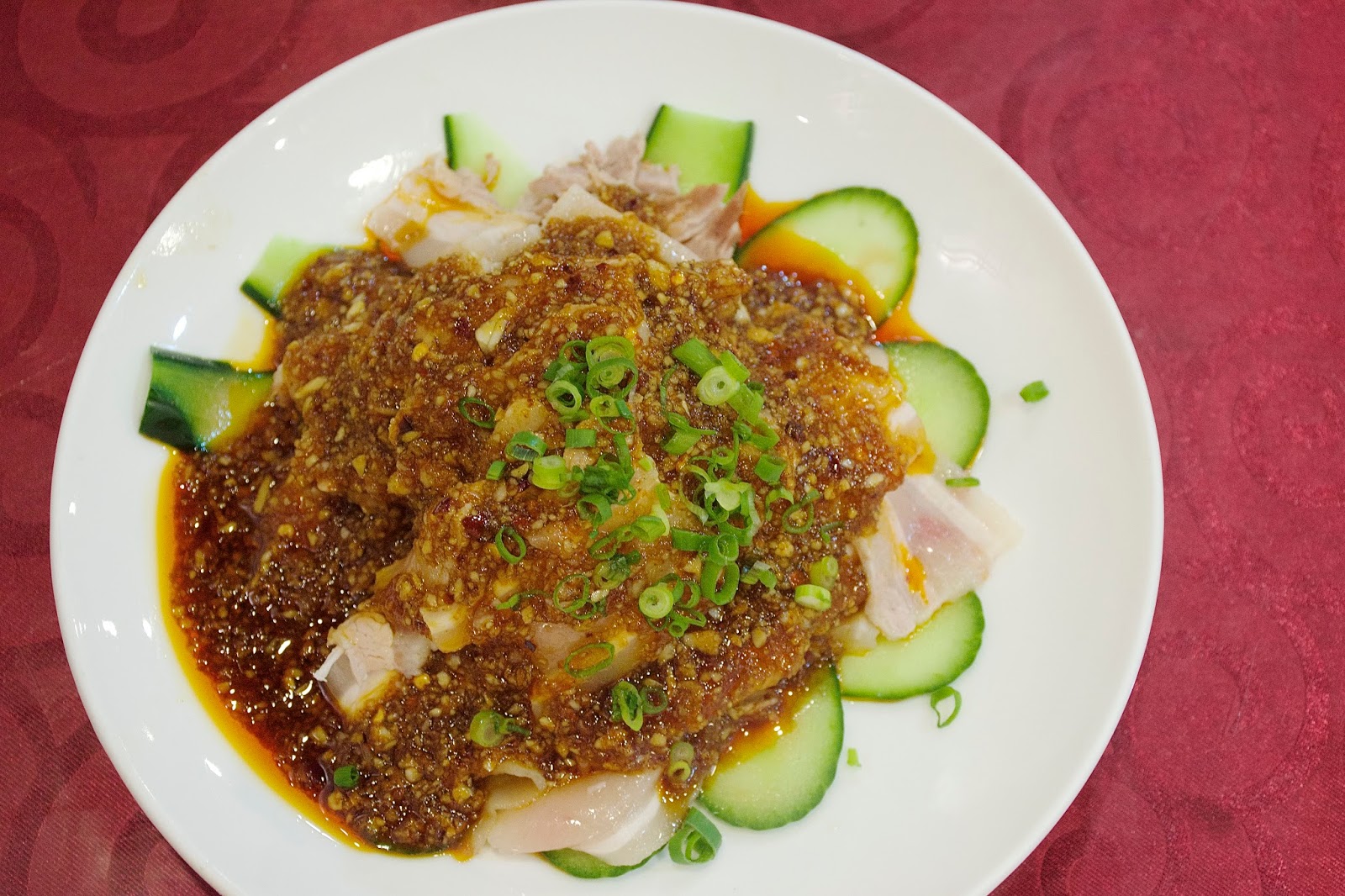 Shin Sliced Pork Belly with Garlic Sauce $7.99
3/5 stars
This dish was the DEATH of me. In my ignorance, I ate 3/4 of the plate and within 5 mins I got a MASSIVE stomach ache, and couldn't even stand. I had to limp back to the car haha. When I got home my mom told me "You're not suppose to eat that much garlic raw, didn't you know that?" WOW, no wonder!! No, I didn't know. Ignorance is NOT bliss people!! I was rueing the fact that I had eaten so much of it!

But, I still really enjoyed the dish (before the subsequent pain.) It was dosed in garlic, and I ended up with major garlic breath. Yea, you really shouldn't order this if you're with a hot date lol. I was a real mess: I could barely stand, I was red in the face, and I had breathe that could pull out someone's nose's hairs with one whiff. My life is so glamorous.

But still...the pork belly was really yummy! It was sliced really thin, with some the right amount of fat:lean ratio. The sauce had medium heat but it was really salty! It was also decorated with some cucumbers on the side, which I ate hehe. 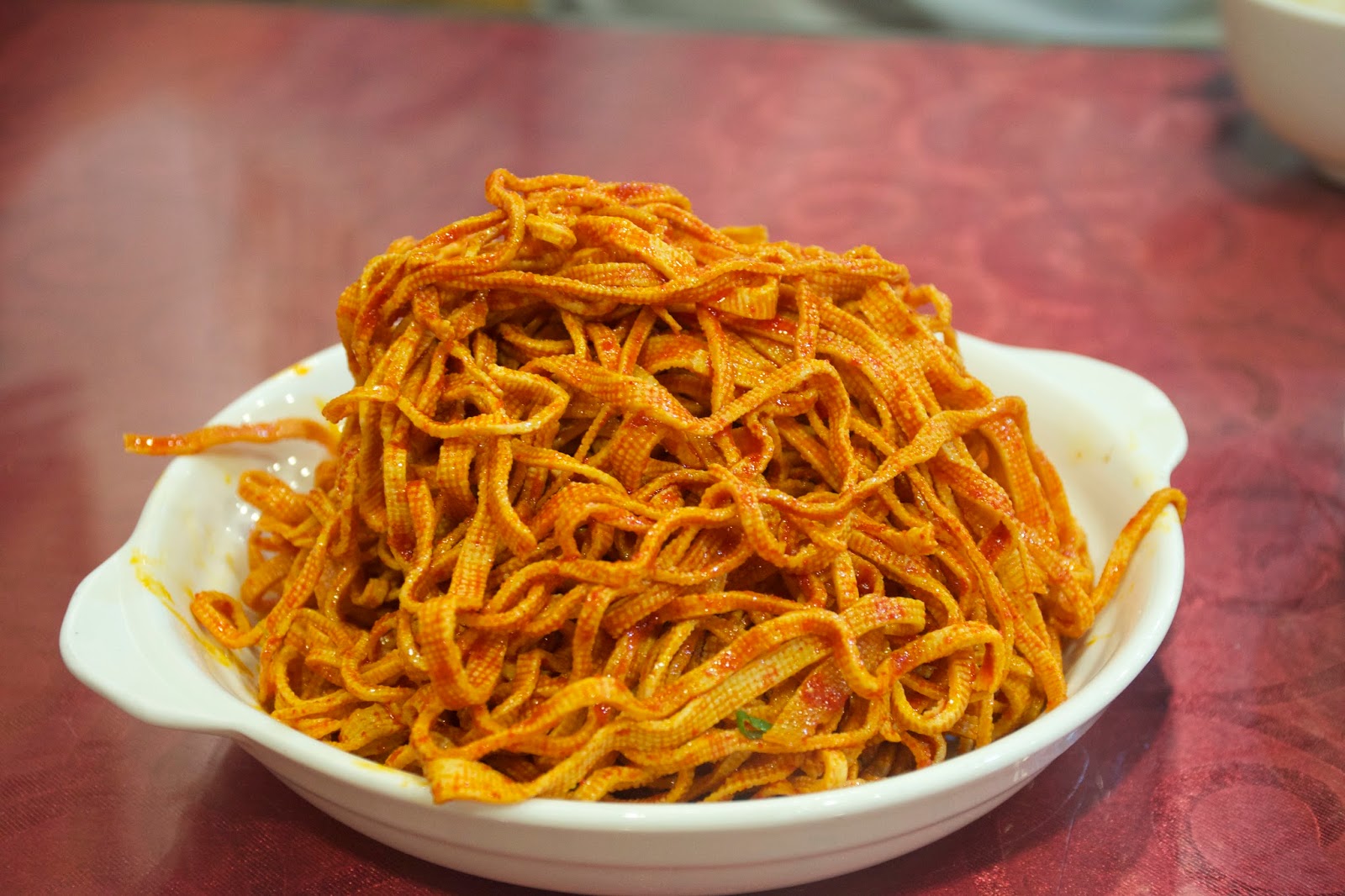 Spicy Beancurd $4.99
2/5 stars
This dish was huge but it wasn't that great. Despite the red colour, it wasn't spicy at all and didn't have any other distinguishing flavours. On the plus side, the bean curd was "springy" and had been properly cooked. But other than that, it wasn't that memorable. 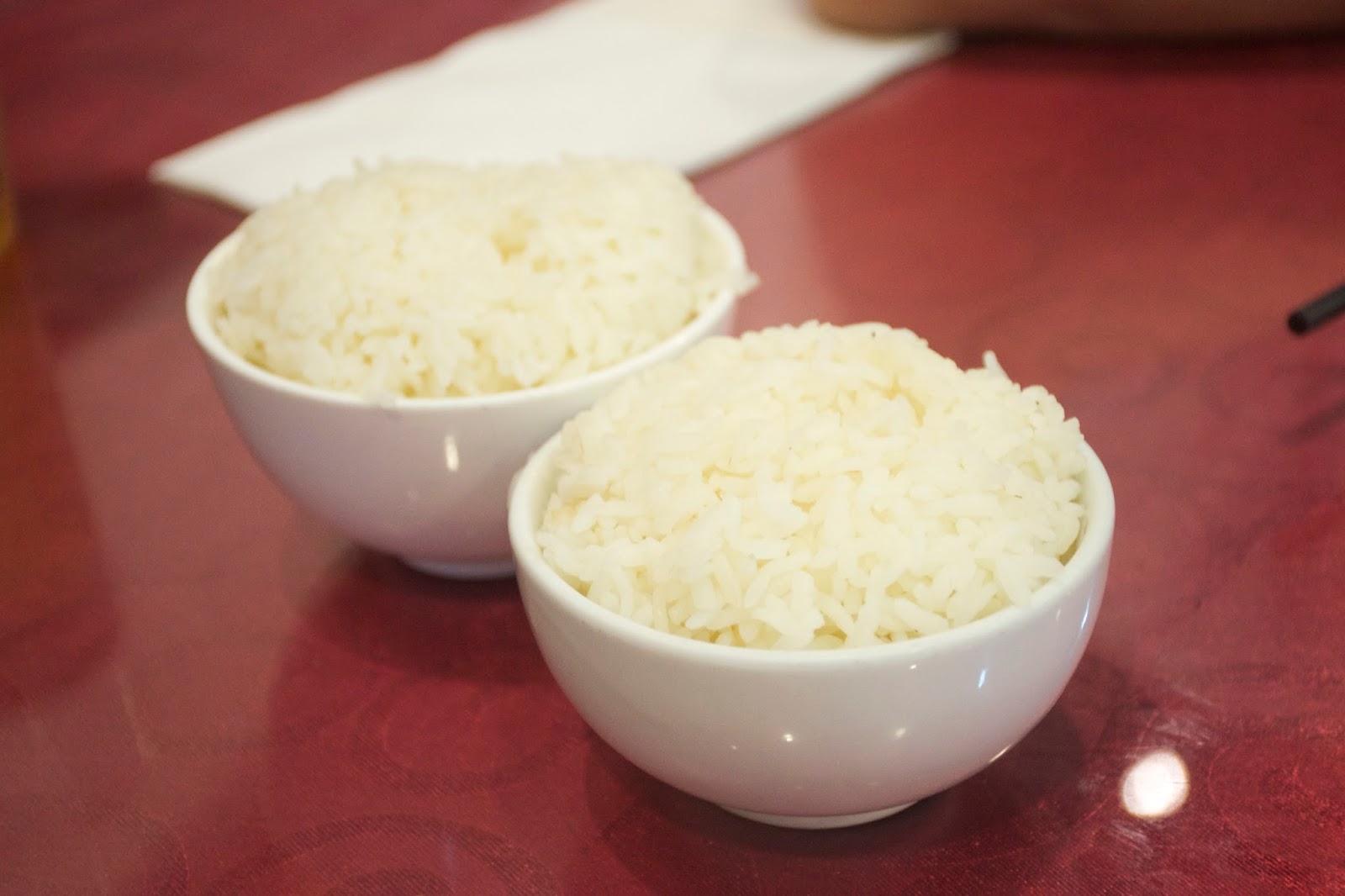 The rice didn't look this white in person, it was actually really yellow...oddly enough haha


The Verdict
The BBQ items and the pork belly were both pretty solid! Overall, we enjoyed our meal at Li's (if you factor out my stomachache) so I'll definitely be back to try their fish!