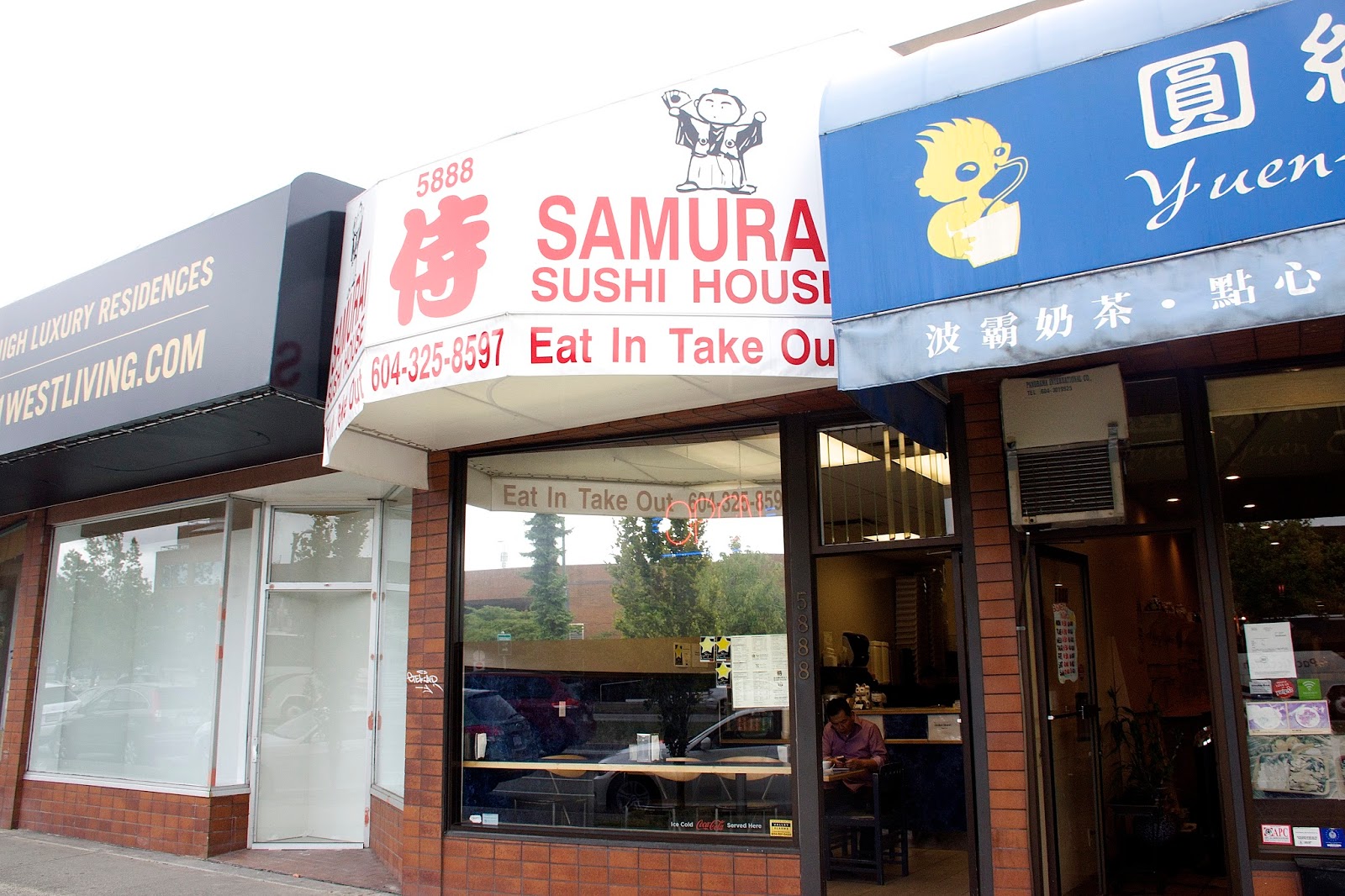 As a student who frequently dines alone, indulging in cheap grub is a pastime of mine haha. Sometimes the occasion just doesn't call for fancy food, yesterday being one of those days. Having only consumed an orange for breakfast, I was starving (more so than usual) so I decided to go to Samurai to fulfill my rice cravings! Yes, rice cravings. They pack so much rice into those things it's like eating 3 bowls of rice. Except it's compacted into a sushi roll lol.

Signature Dishes
Samurai is famous for their massive rolls that are the size of softballs! Obviously this isn't going to be authentic fare, but who's here for pressed sushi and fancy nigiri anyways? From what I observed Samurai is run by a Vietnamese family, but I also heard overheard them speaking Cantonese! They have another location in Richmond, called Banzai Sushi. I'll probably do a review on Banzai in the future so I can compare the two to see if they're consistent across locations.

Ordering is really easy, they have a visual menu on the wall of all their combos. They had this really good special going on where you could get a Alaska Roll, California Roll, and Kappa Roll for $6.50!
They have a dizzying amount of combo options, all with pretty much the same stuff, but in different combinations. It's best to stick with the sushi rolls, because I've heard that their nigiri tends to be "rubbery" lol.

Service
They're mostly a takeout restaurant because seating is limited. The food comes out really fast, but if you're in a rush you should call beforehand and they'll have your order ready when you come pick it up. If you are eating in, don't expect them to seat you or hand you a menu, you seat yourself and order at the counter.

Ambiance
Ambiance, what ambiance? lol the place is really small, with 2 bar tables. The seating is really uncomfortable, especially if there's people around you because the chairs are literally back to back. Eating in is not recommended lol. Since Oakridge is across the street, you could go to their food court and eat there!

Price - Affordable $
Samurai is as cheap as "sushi" gets lol. If you're looking to fill your belly on the least amount of money, you could order half of their house roll for $6. Believe me, you'll likely be full. And if you aren't, you could order another roll for $3 lol.

Value - Great
By no means do they use quality ingredients, but for the price, the value's great. They don't skimp on the fillings, and the rice:filling ratio is adequte. Some places just give you too much rice, but Samurai balances it out with more filling in return. 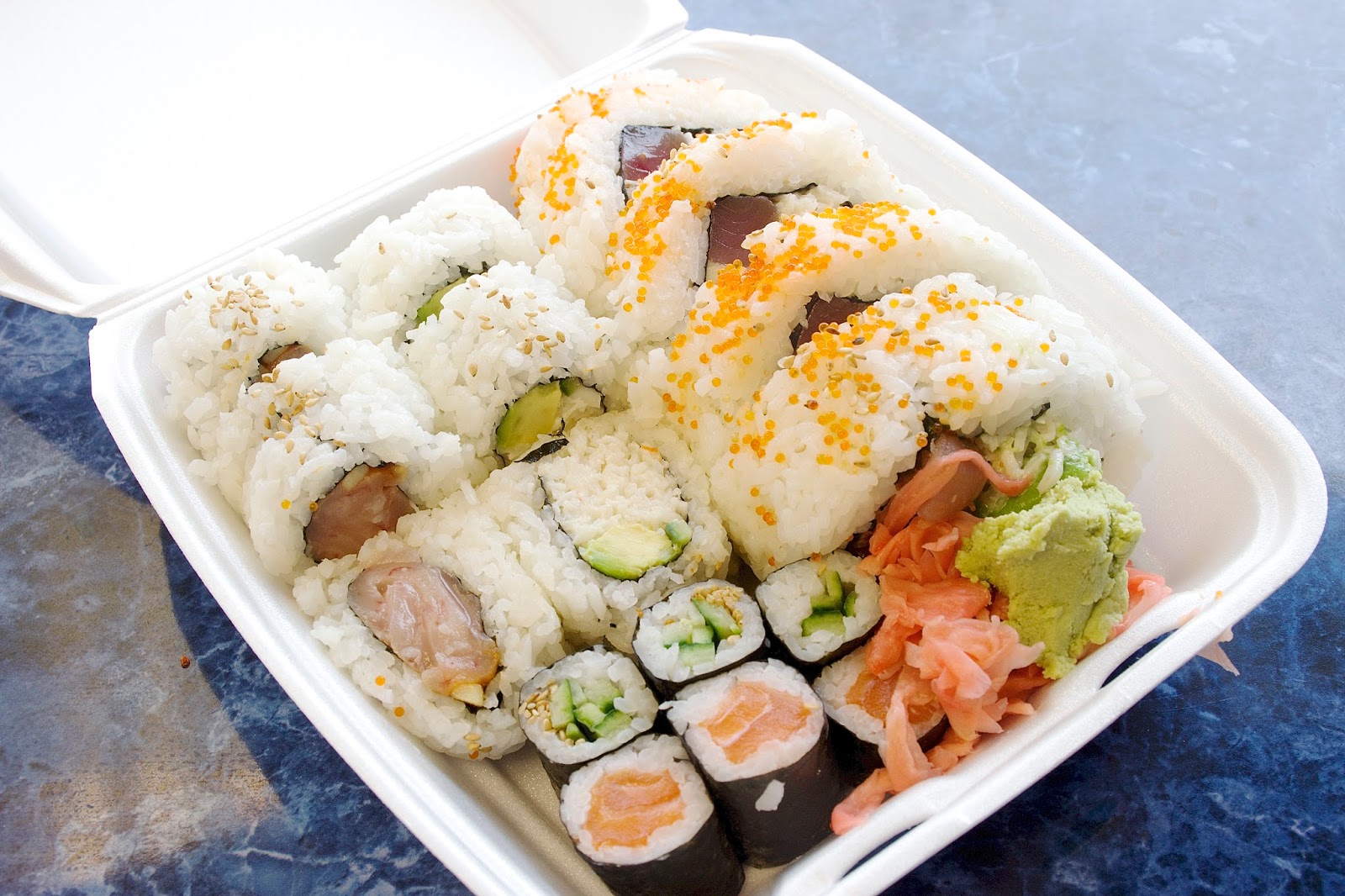 California Roll: 2.5/5 stars
Basically your run of the mill, average california roll, but 2 times the size. I was happy about the rice: filling ratio. There wasn't too much rice, and there was a decent amount of filling. Taste wise, it wasn't too exciting. I actually found the imitation crab meat to be a little overly sweet, probably from the mayo. I read in other reviews that they don't "flavour" their rice, but I think they do now, because the rice tasted a bit vinegary.

Spicy Salmon Roll: 1/5 stars
This roll was really "off." The texture was too slimy and just made the whole roll really gross. It had an almost mushy like texture, which I didn't enjoy. It wasn't that spicy either.

Cucumber Maki: 2/5 stars
Your basic Kappa roll. The cucumbers tasted fresh, but the rice was a bit harder than the other rolls.

Salmon Maki: 2/5 stars
I liked how there was more salmon than rice in this. Other than that, the salmon tasted predictably like farmed salmon. Nothing earth shattering.

I couldn't finish the entire combo so I ended up packing up half of it for dinner lol. 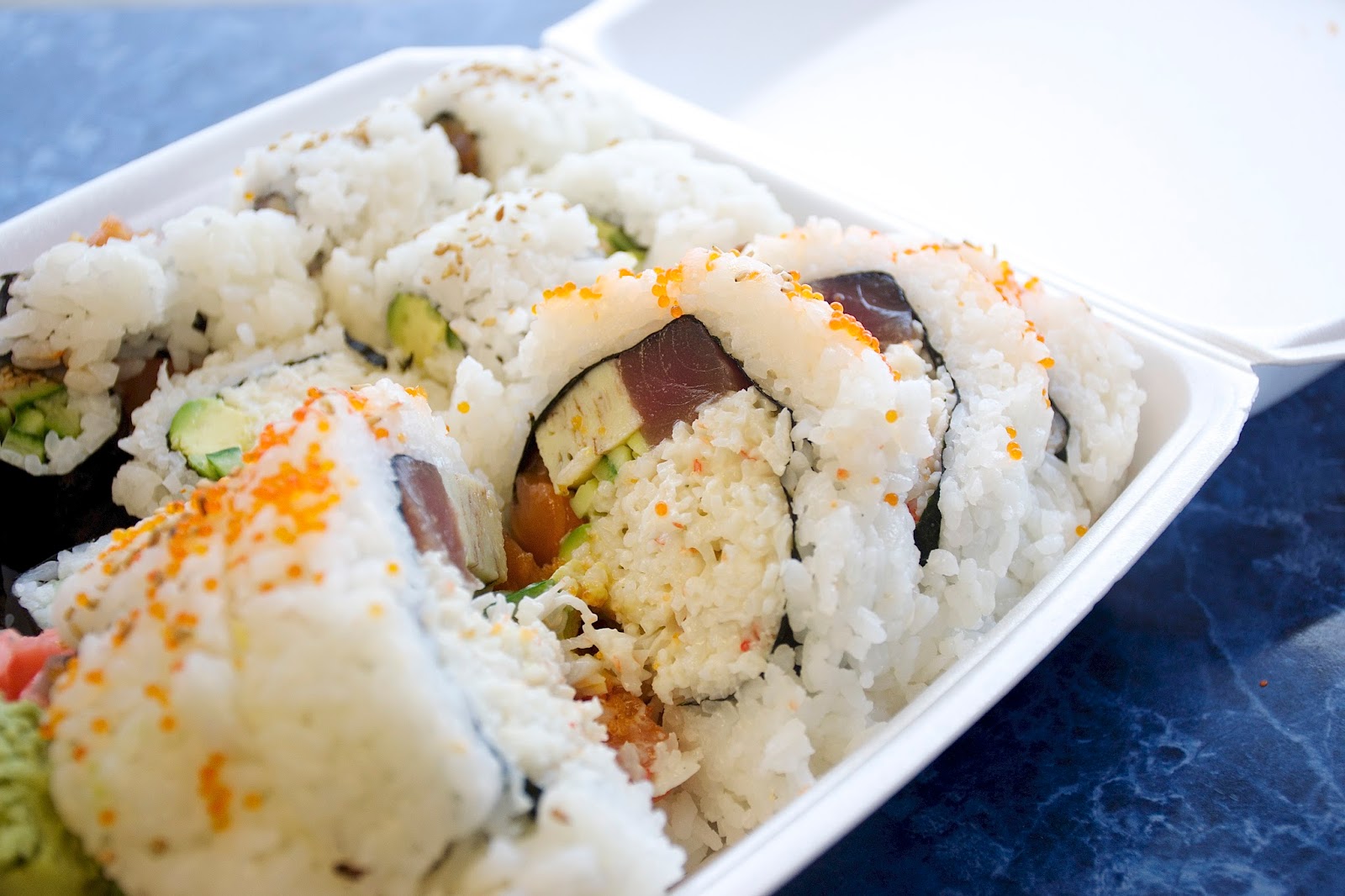 House Roll $6 half a roll
3/5 stars
This thing was HUGE. I can't stress enough how huge this thing was. You can tell just by comparing it to the maki rolls. Taste wise, it was pretty decent. It had a good amount of ingredients in it. It was comprised of salmon, tuna, imitation crab meat, avocado, masago and a (horrendously pale) version of tamago lol. The imitation crab meat was really well flavoured, and actually really sweet. The salmon and tuna were basically flavourless, and a bit rubbery. The avocado was decently fresh. The tamago was super pale, and a little overly sweet. 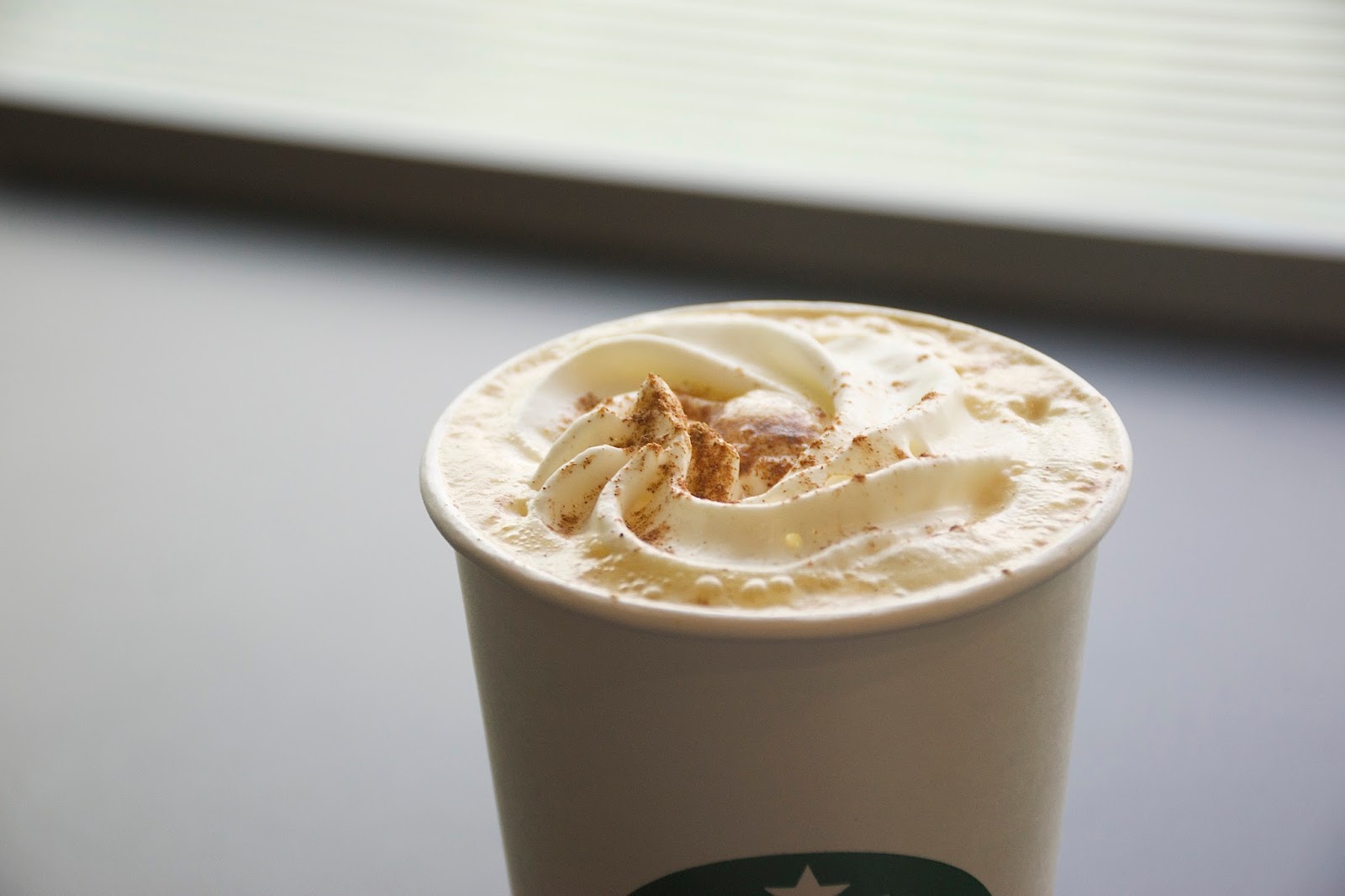 I also had some Pumpkin Spiced Latte yesterday hehe!! I couldn't detect any trace of pumpkin flavouring in this, the only thing I could taste was cinnamon, sugar, and coffee lol. Is it just me?

The Verdict
If you're on a budget or if you're just looking for gigantic pieces of sushi, Samurai won't disappoint! Sure it's not authentic, but they're not trying to be! The food's decent, and the portion sizes are huge! Two people can easily get full for under $10. Factoring in how much it costs to dine out in Vancouver, at the end of the day, Samurai is a great deal!