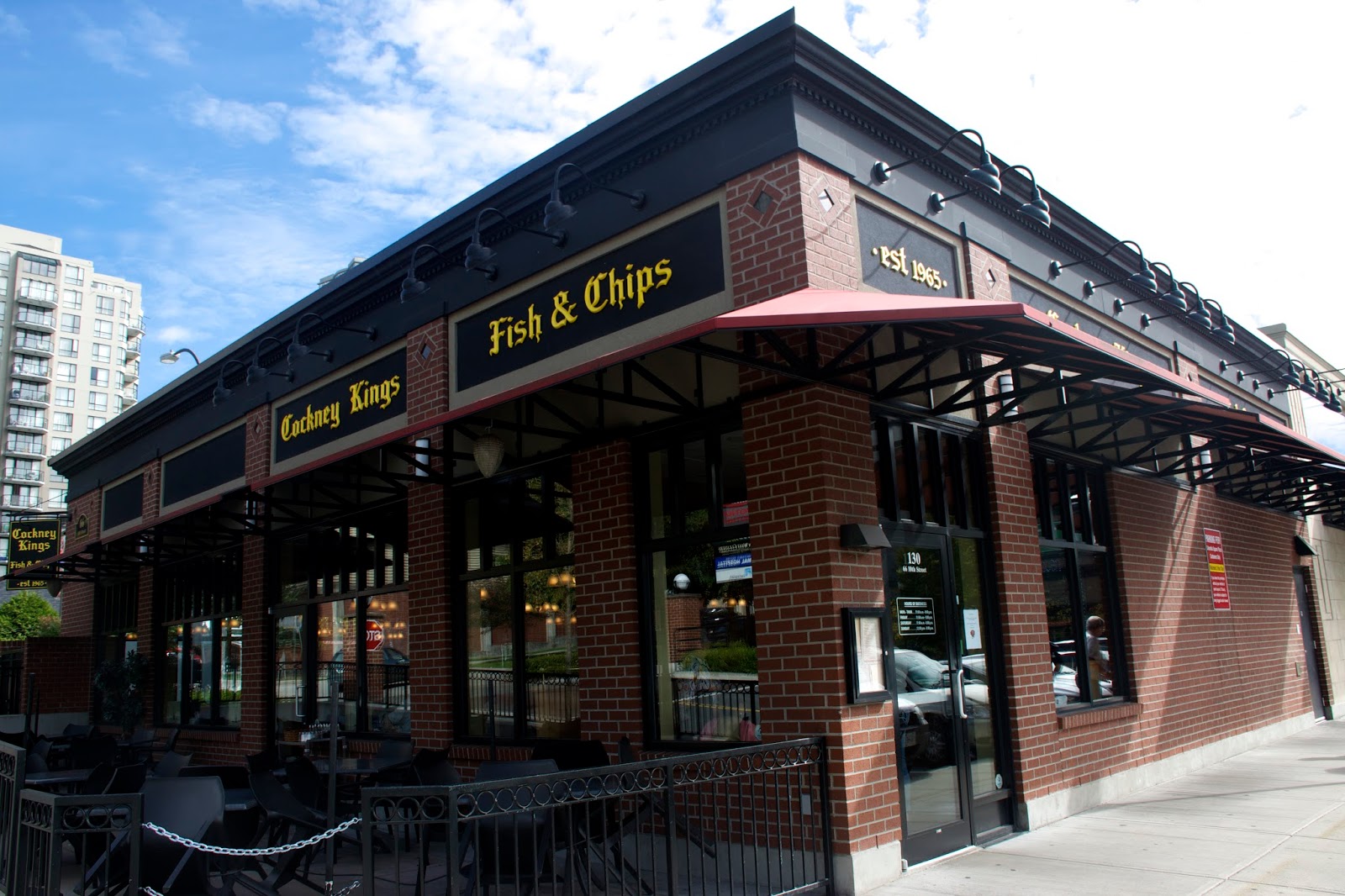 When I was a kid I use to come to this plaza a lot because my dad would take us to the same chinese buffet every week LOL (yea, sounds like something my dad would do right?) ;)

Cockney King's is located conveniently near the New West skytrain station (yay! since the skytrain is my main mode of transportation lol!) in the same plaza as Chronic Tacos! During my hunt for food, I came across a ton of different restaurants in New West hehe, so rest assured they'll be more New West reviews coming your way very soon!

I went to Cockney Kings because I wanted to try their AYCE fish & chips so I could compare it to C-Lovers, but when I got there, turns out they only offer ayce Mondays, Tues, and Weds! LOL dang it! So I had to settle for their regular menu, which is more expensive!

SERVICE 2/5 stars
When I arrived the restuarant was half empty so I got to choose my own seat! 10 mins later...50 people showed up lol! There were only 2 waitresses covering the floor so they were both running back and forth. They were quick to fill our orders though and the food came quickly.

AMBIANCE - Casual
Cockney King's is really bright, with windows spanning across the entire restaurant. It was really sunny yesterday, so they really should've opened up their patio, because they have a big one! This place is decorated exactly how you would expect a fish&chips joint to look like, with basic decor. I like how their kitchen is open concept so you can see them making your fish if you go up to the front!

PRICE - $/$$/$$$
The prices are pretty typical of a fish&chips joint. It's significantly cheaper than say Stevenston, where a fish & chips combo can run you over $16.

VALUE - Poor/Okay/Good/Great
The portion sizes here are quite large. But for the money, I wasn't expecting less haha! The seafood tasted fresh, since it had been freshly fried. 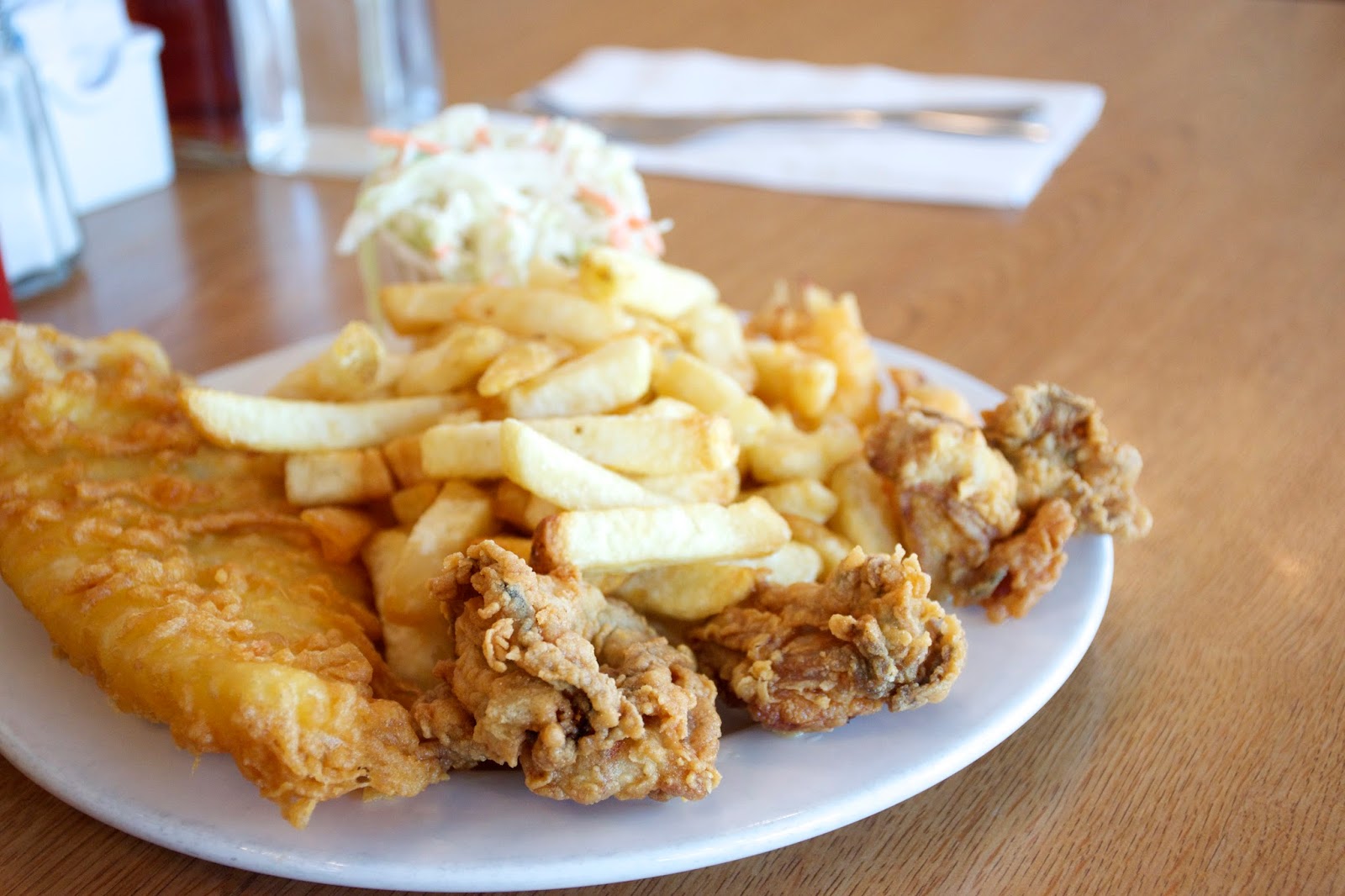 Seafood Dinner Platter $15.50
Oysters: 3.5/5 stars
Fries: 1.5/5 stars
The combo came with 3 pieces of oyster! The oysters were well battered, crunchy, and not oily at the all! The exterior was nicely fried and "airy." The interior was moist and full of oyster-y flavour LOL. I like thick cut french fries, but not these ones haha. They weren't crispy enough for my liking and the edges weren't charred. They were very potatoe-y (unprocessed) but they didn't taste that fresh. 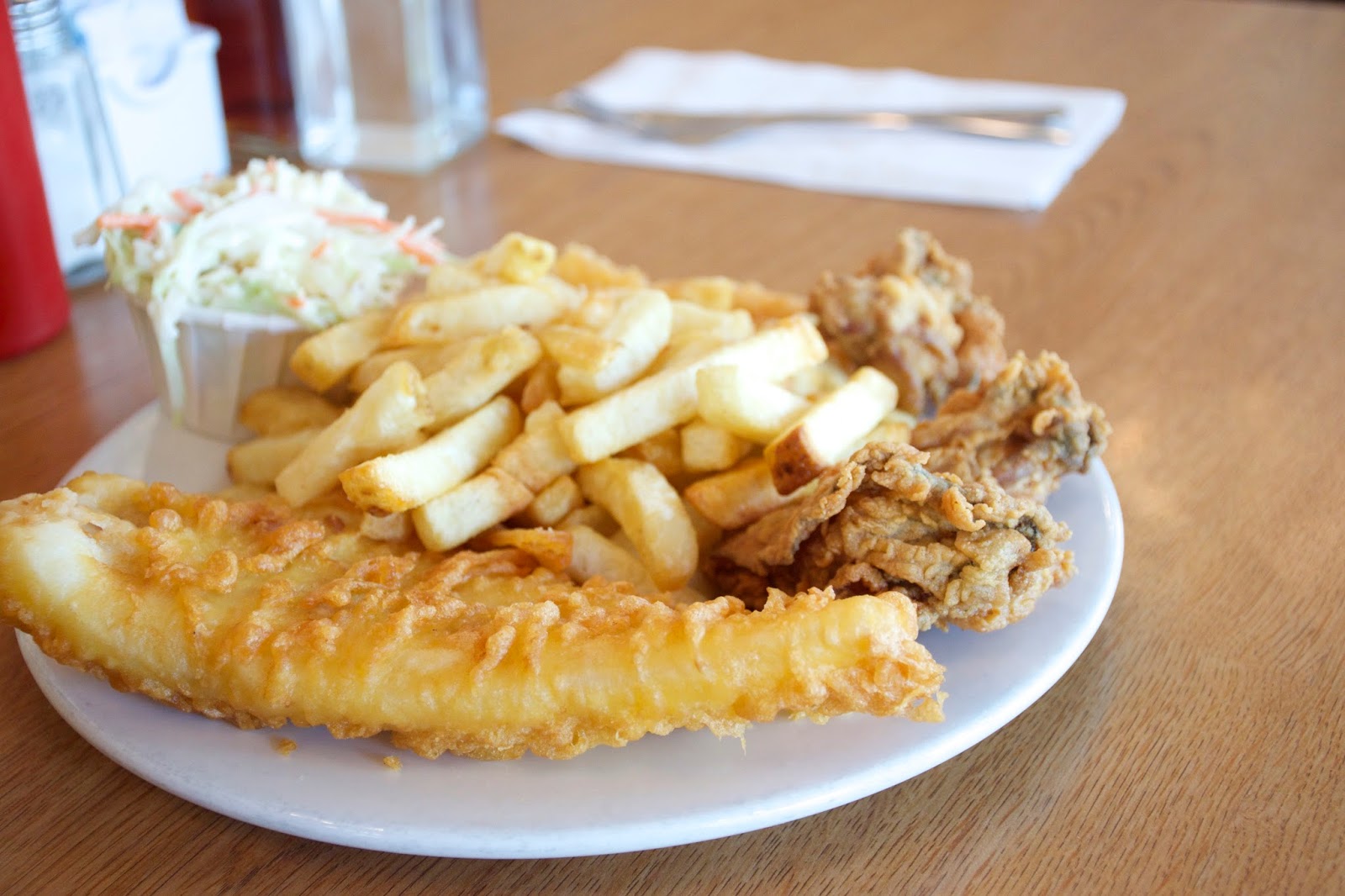 Fried Haddock
Haddock 3.5/5 stars
Tartar Sauce 1/5 stars
For every combo you have the option to choose between cod, haddock, or salmon, and I went with their haddock (because it's supposedly their best one!) The piece was really large, and lightly battered! It was super crispy and hot when I cut into it. The fish itself isn't seasoned, so you have to dip it in the tartar sauce that they provide on the side. I wasn't a fan of their tartar sauce. It was too weak, wasn't tangy enough, and just didn't have enough flavour. Plus it was really cold LOL, I don't know about you, but I don't like dipping hot fish into cold tartar sauce. I prefer my tartar sauce room temperature!! 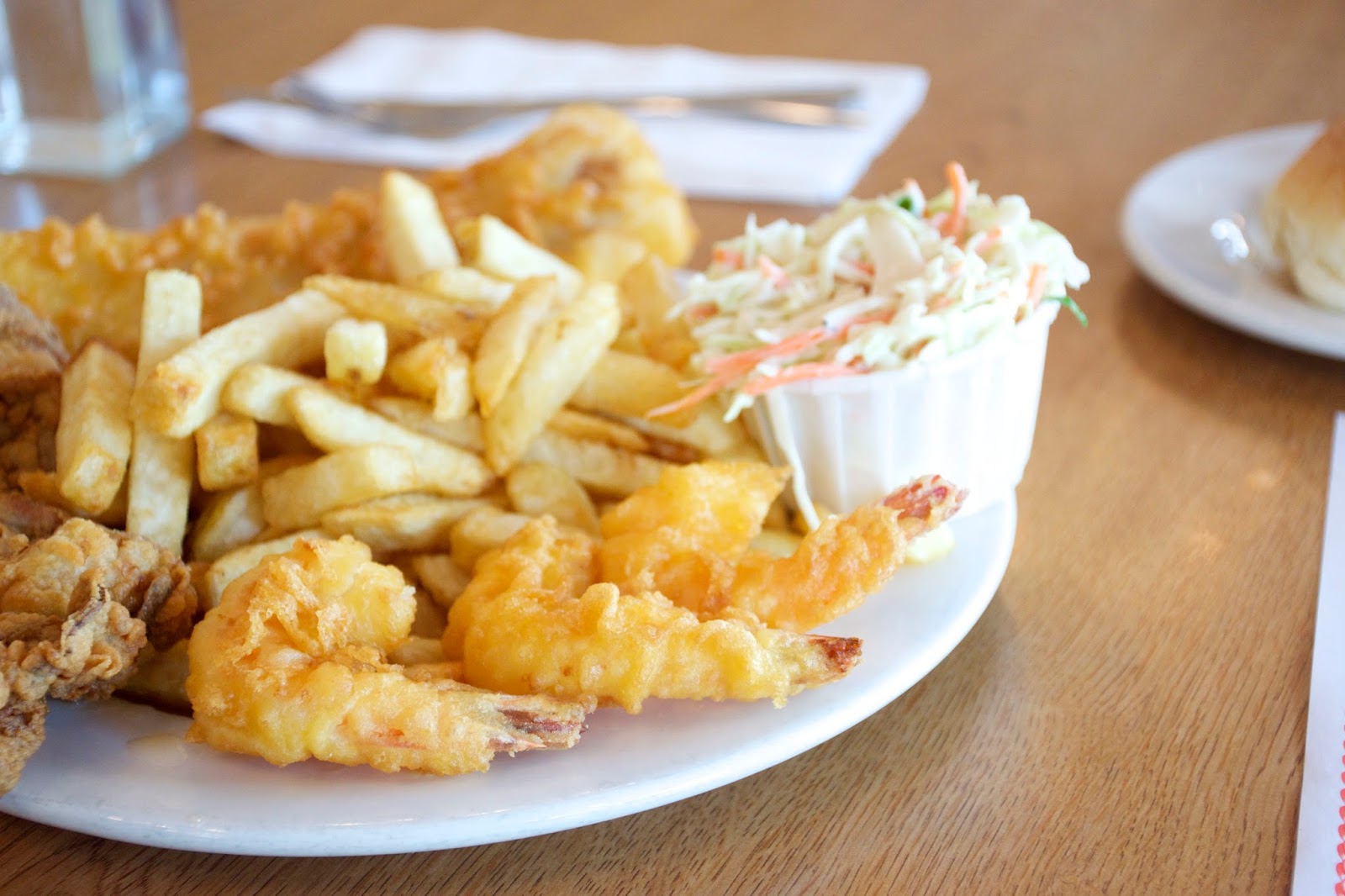 Fried Shrimp
Shrimp 3/5 stars
Salad 1.5/5 stars
The salad was pretty boring, but standard. The veggies were crunchy and mixed with a weak tasting sauce lol. Moving along, the shrimp was well executed: snappy, juicy, and slightly sweet. The exterior was lightly battered with a nice crunch. 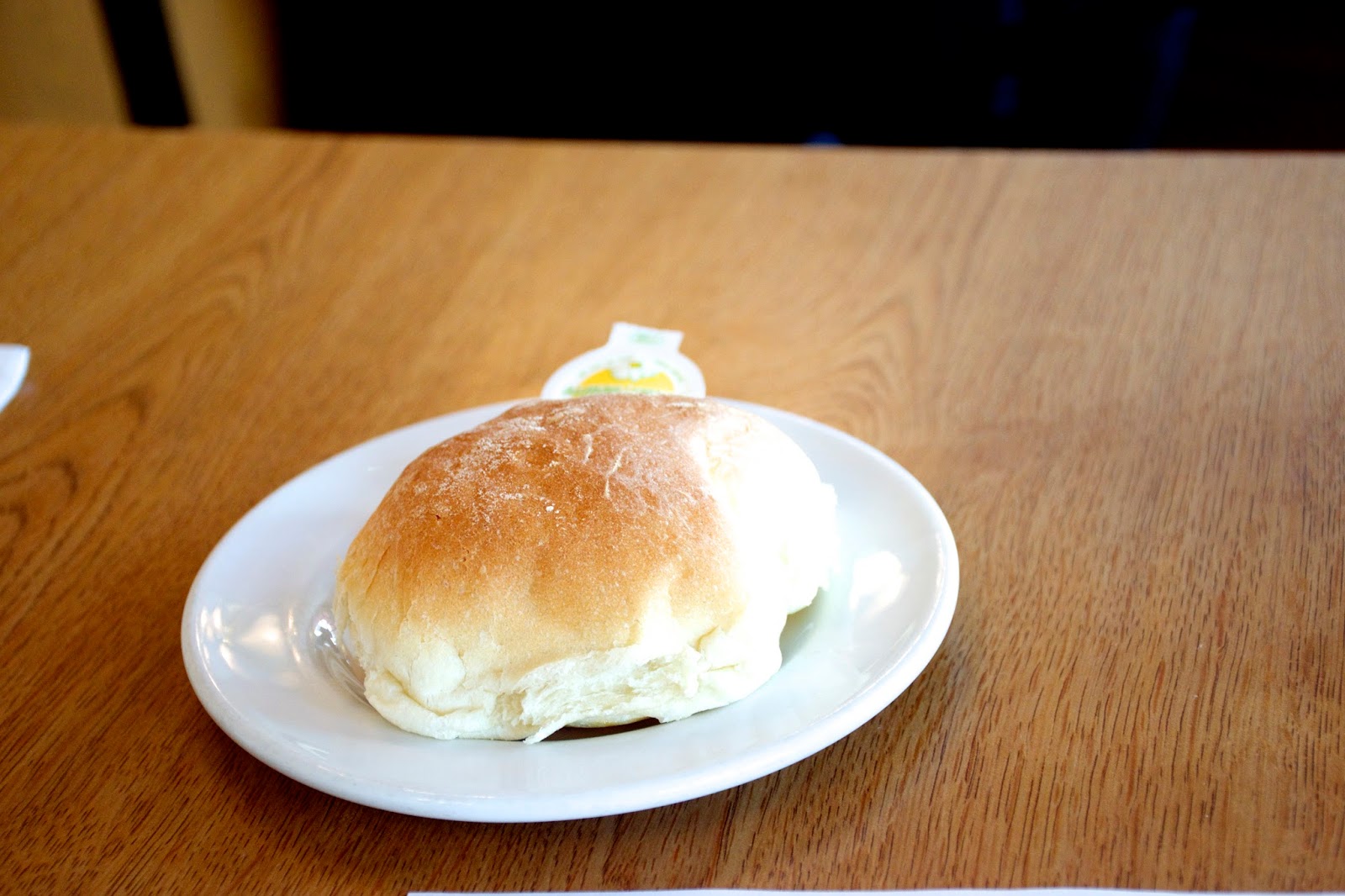 Bread
1.5/5 stars
All of their dinner combos also come with some bread & butta! The bread was soft, but my it was stone cold! Do they keep their bread in the fridge or something? lol.

Overall, Cockney Kings is a great place to satisfy a fish & chips craving! Decently priced, fresh food, makes this place solid all around. I'll definitely be back to try their ayce!! hehehe