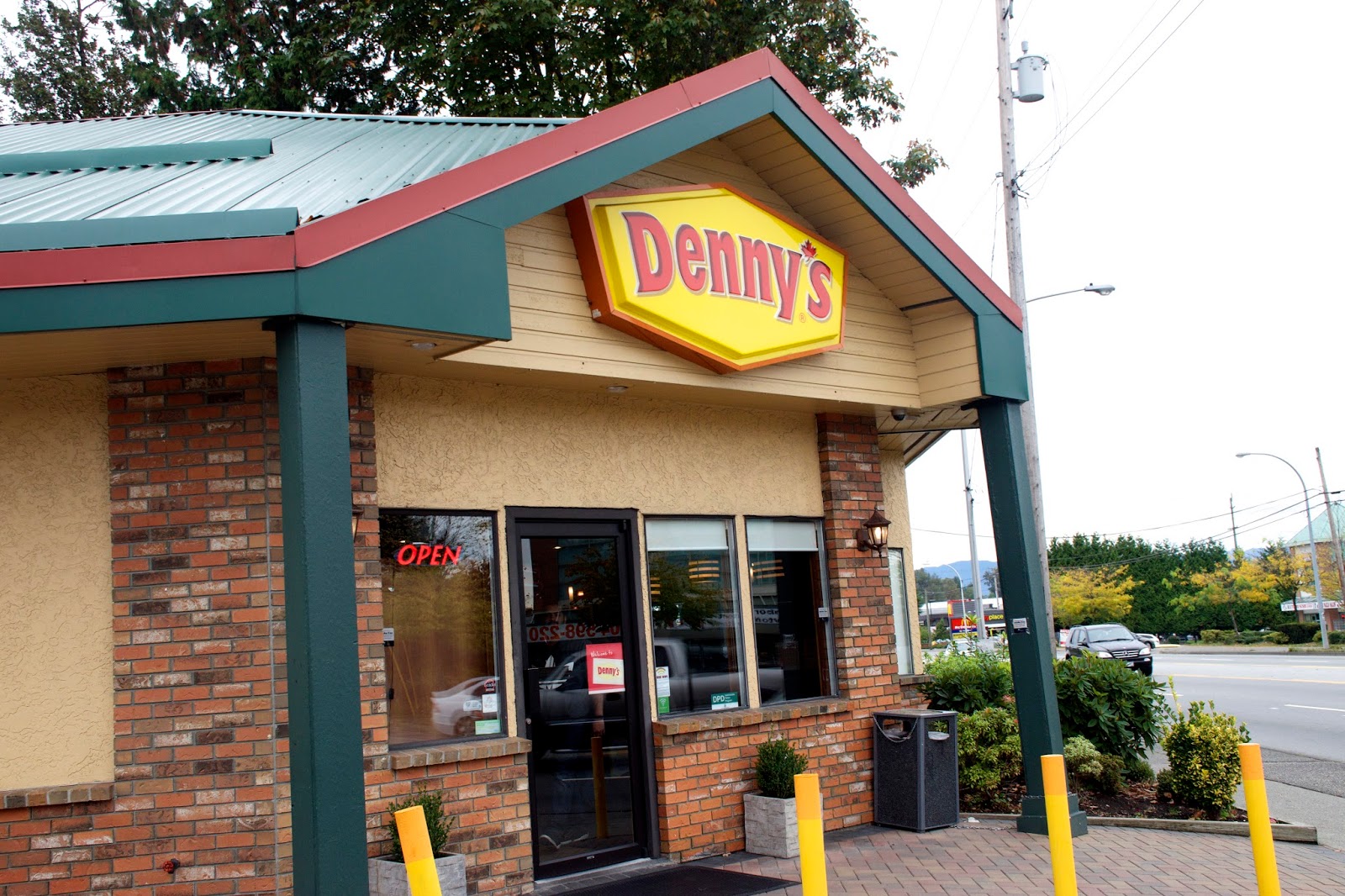 "So where do you want to go for Thanksgiving Dad?" I asked him. "Dennys!" he answered. Despite his dim sum addiction, my dad has a soft spot for classic diners like Denny's and White Spot LOL. Back when he immigrated to Vancouver 35 years ago he use to go to Denny's a lot! Since it was Thanksgiving my dad didn't want to go to a chinese restaurant because Thanksgiving isn't a chinese holiday LOL so he wanted American food!! He's only familiar with chinese restuarants, so to him Western food = White Spot, Denny's, Boston Pizza, Mcdonalds, etc....LOL.

You guys may find this surprising, but I've NEVER been to a Denny's before. Yesterday was my first time going haha! Since my dad was in a really good mood yesterday, I took full advantage of that and decided to pull an eyes-are-bigger-than-my-stomach and order a bunch of food LOL!! No, we didn't end up finishing our food and had to pack half of it home haha! Turns out he was in SUCH a good mood he didn't even complain about the bill being $35 LOL! Usually he complains if anything is over $20 but today he didn't! :D 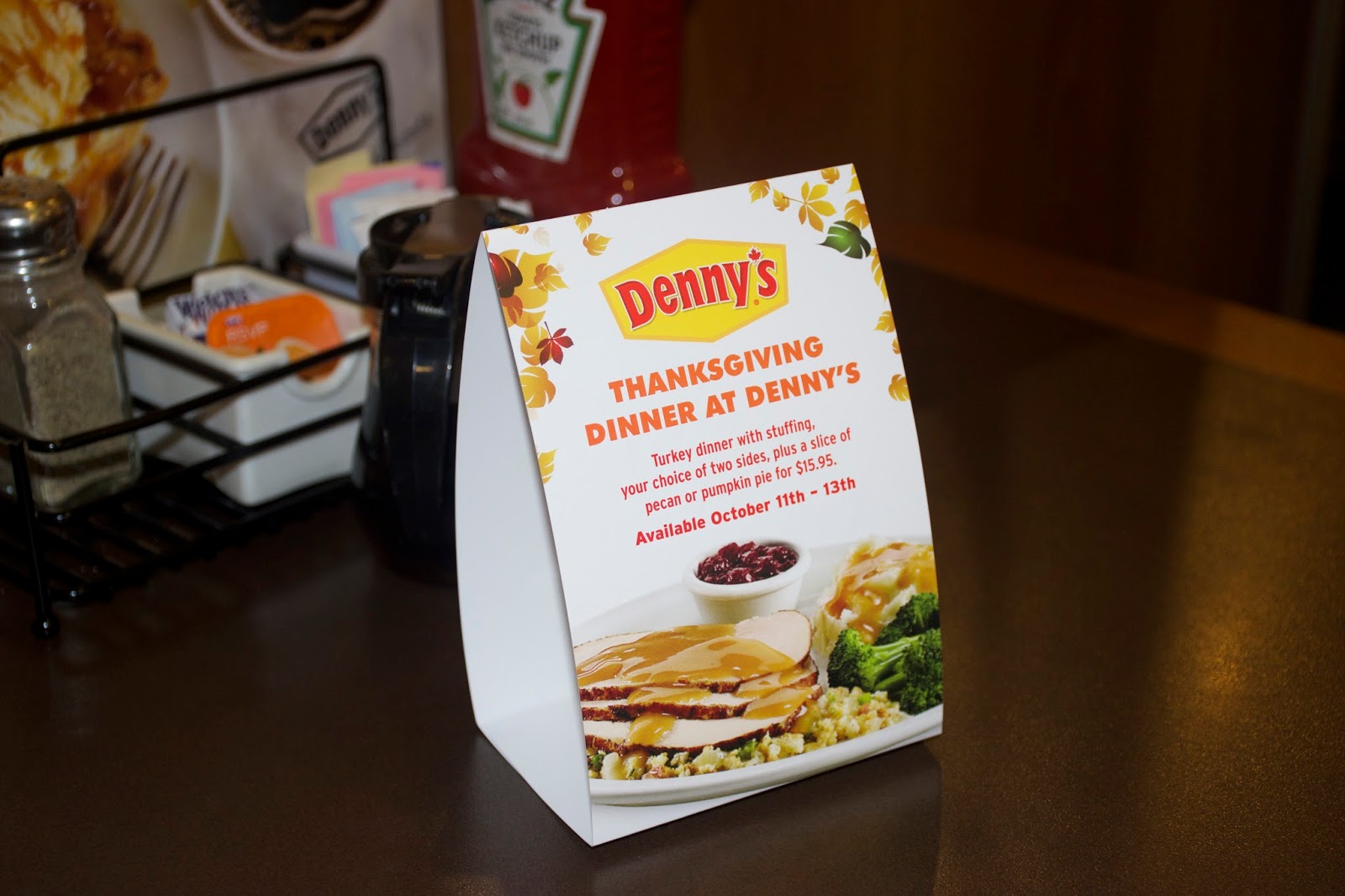 My dad had his mind set on having TURKEYY lol!! Either it was this or the meat iron skillet combo! 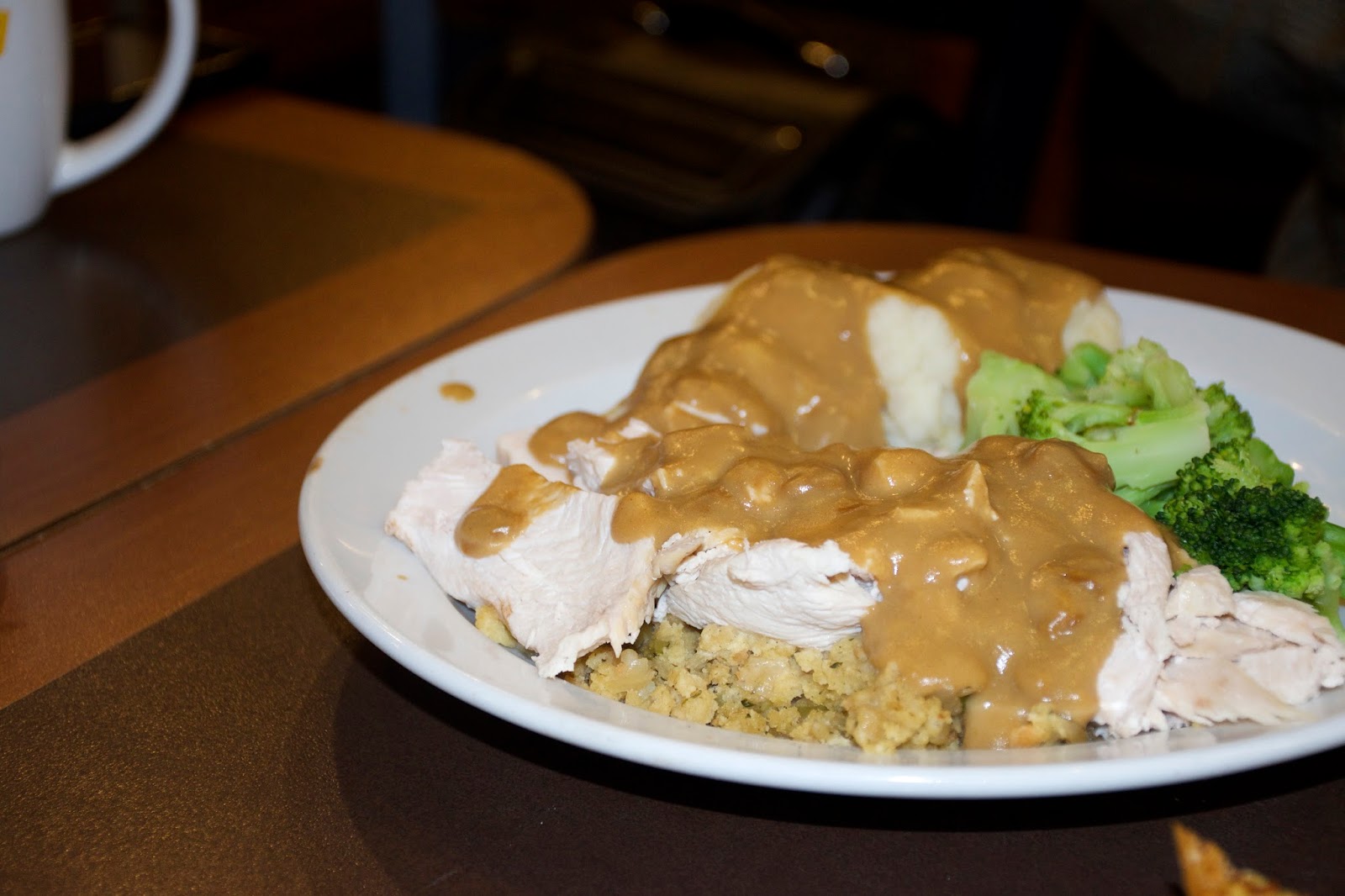 Turkey Dinner Combo $15.95
2/5 stars Turkey
2.5/5 stars Mash Potatoes
Wow this plate was huge lol! My dad had trouble finishing it and by the end of it, he said that he was stuffed lol! I tried everything and it was half-decent. The turkey was a bit dry and not very tender. The gravy tasted like stock gravy,weak and rather watery. The mash potatoes (in the back) were standard, mushy, and very heavy on the butter. The stuffing was okay, a bit dry and lacking in overall flavour. 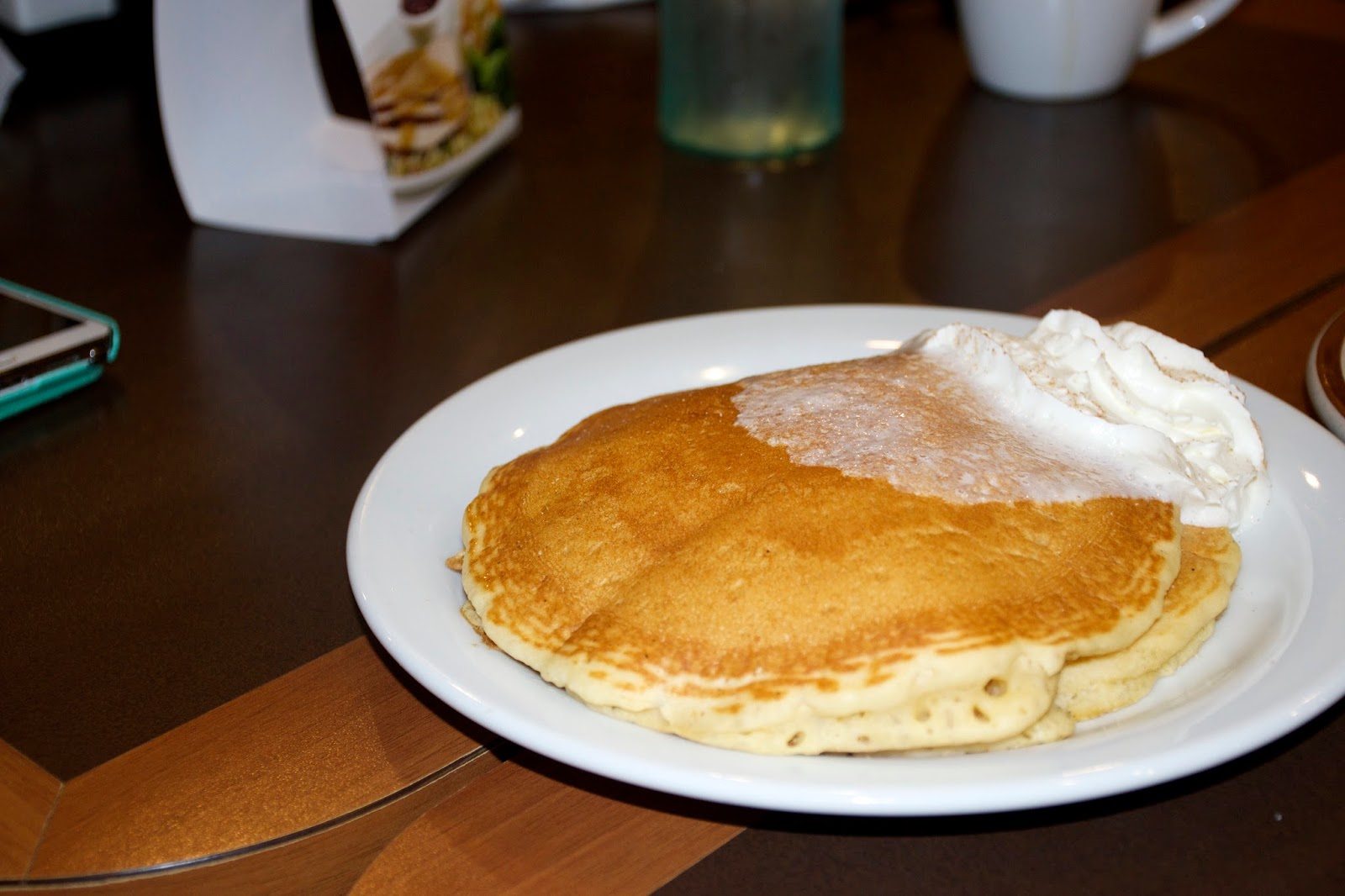 Pumpkin Pie Pancakes Combo $10.95
3/5 star
I  had my mind set on ordering the pumpkin pie pancakes since it's a seasonal item! The pancakes were quite large, and we only ate half of it lol. The pancakes were decently fluffy and moist, heavy on the cinnamon with a subtle pumpkin flavour. It also came with some whipped cream on the side! It probably would have been better with some butta but I totally forgot to ask for some LOL! 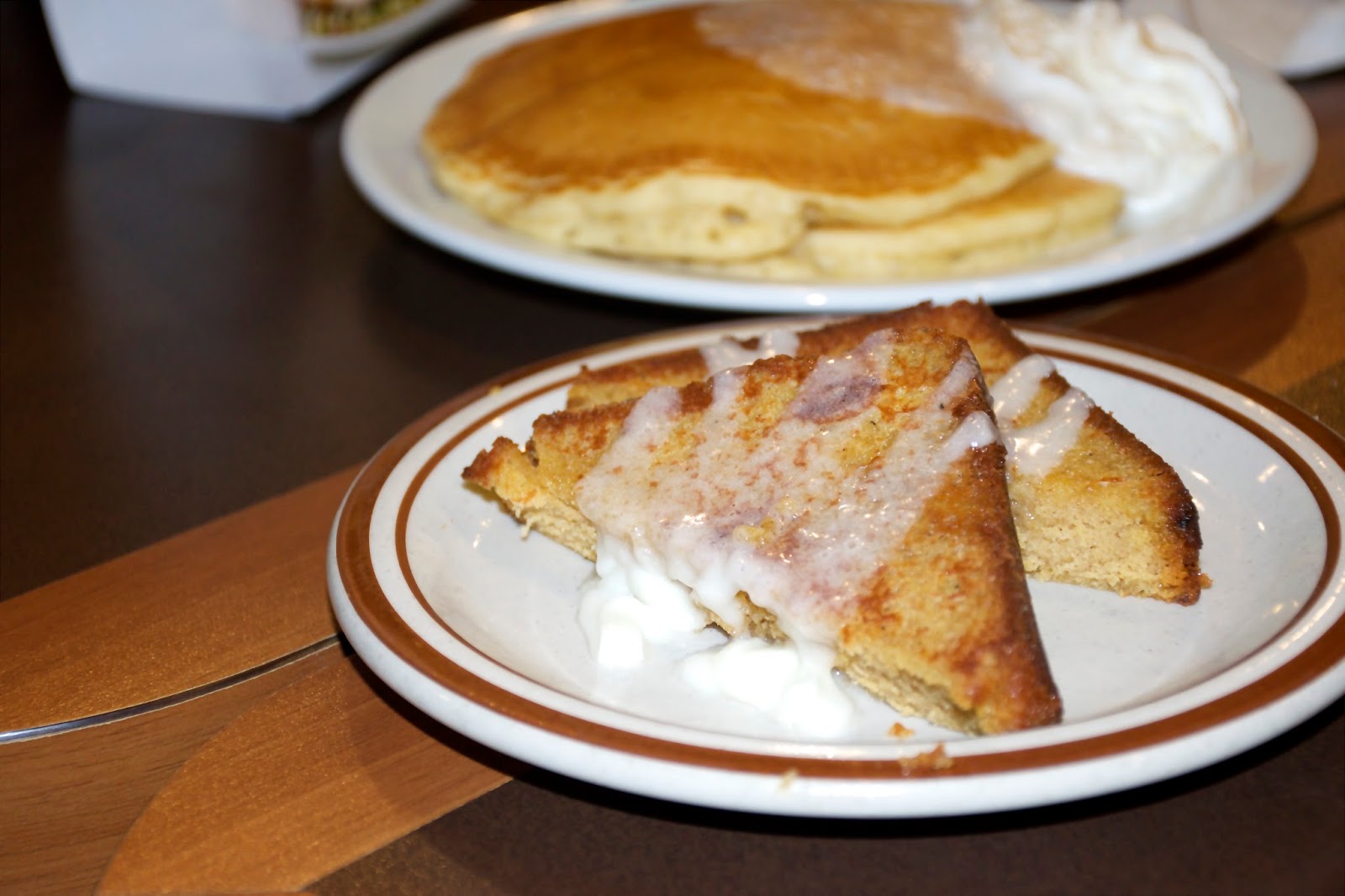 Gingerbread French Toast $4.95
2/5 stars
This was pretty pricey lol! $5 for two small pieces of mediore french toast? The french toast was a bit dry and lacking in moisture, and a bit too dense for my liking. The ginger flavour was subtle, but definitely there. It was drizzled with an artificial tasting cream cheese sauce, which made the toast really sweet lol. 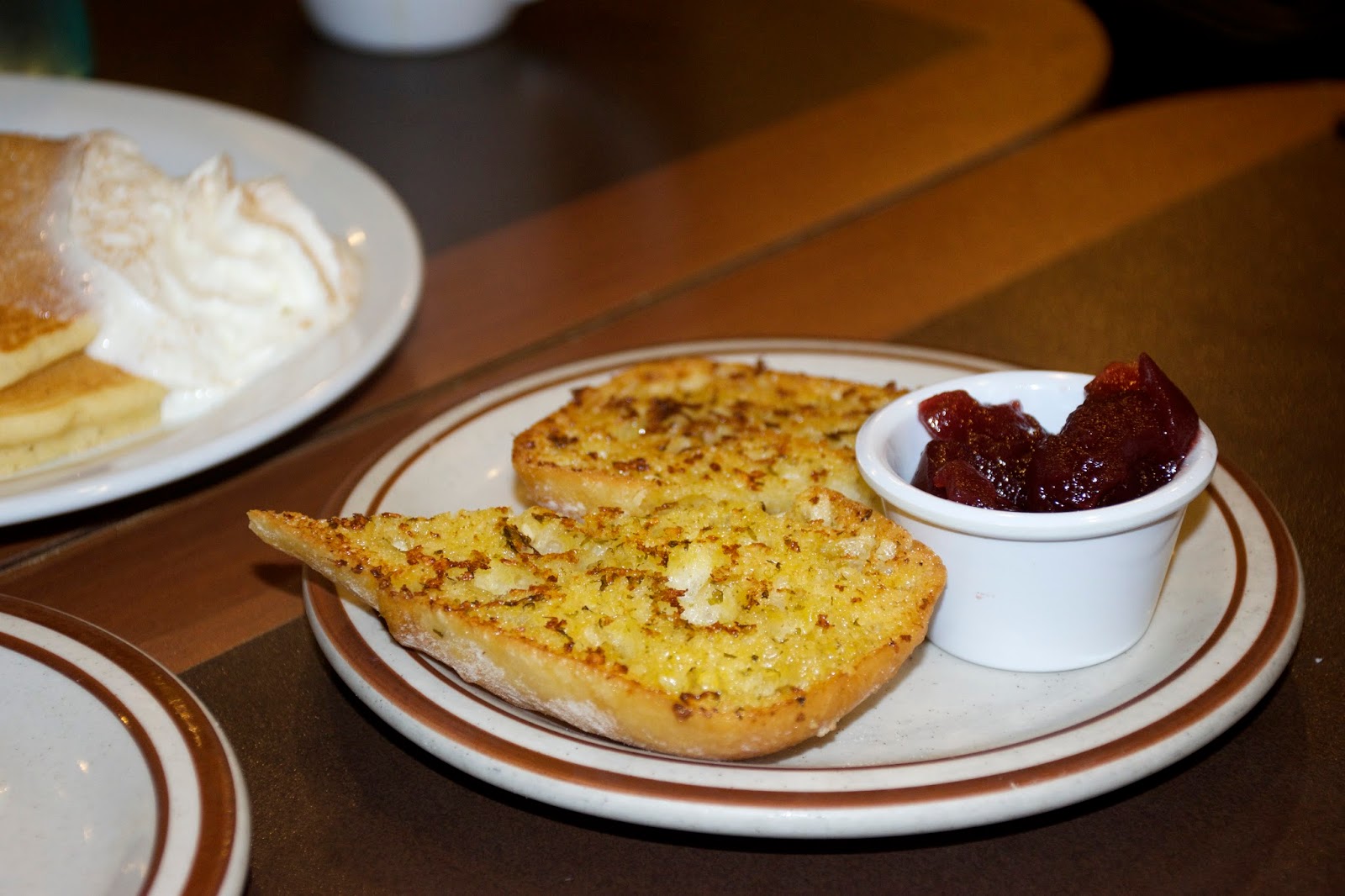 Garlic Toast & Cranberry Sauce
Garlic Toast 3/5 stars
Cranberry Sauce 2/5 stars
I was surprised at how much I liked this lol! It was well toasted, crunchy, with some charring on top! There was no absence of garlic flavour either! It also came on the same plate as the cranberry sauce for the turkey. The sauce was okay, personally I found it too gelatin like in texture, I prefer my sauces more jam-like and mushy. It wasn't too sweet though! 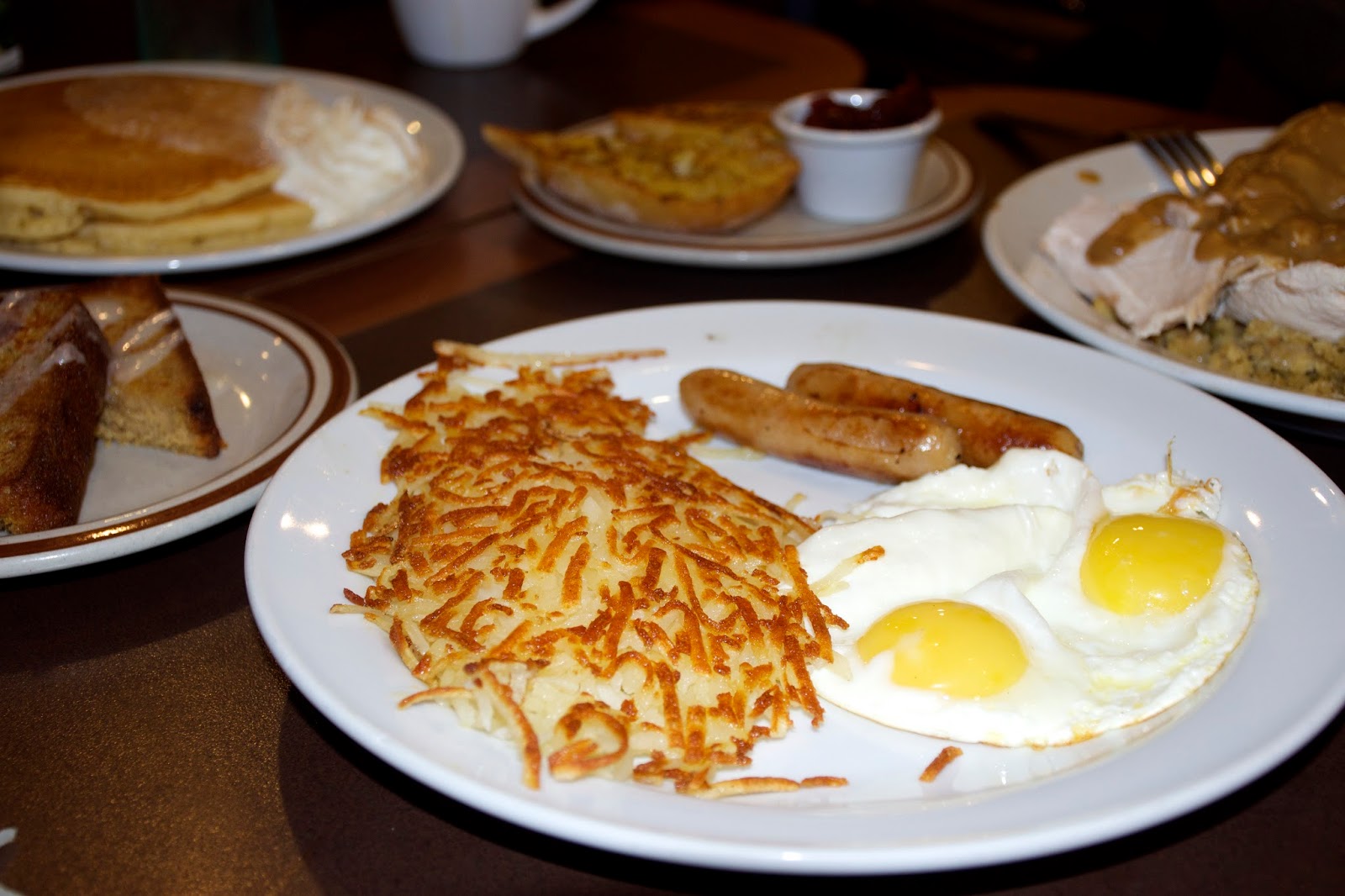 Grand Slam Combo
3/5 stars
Comfort breakfast food lol. Simple, and really hard to mess up. The hashbrowns were crispy, albeit a bit lacking in flavour.I got my eggs sunnyside up and sunnyside up they were! :D Instead of bacon I opted for sausage links. They were okay, a bit oily, but juicy nonetheless. 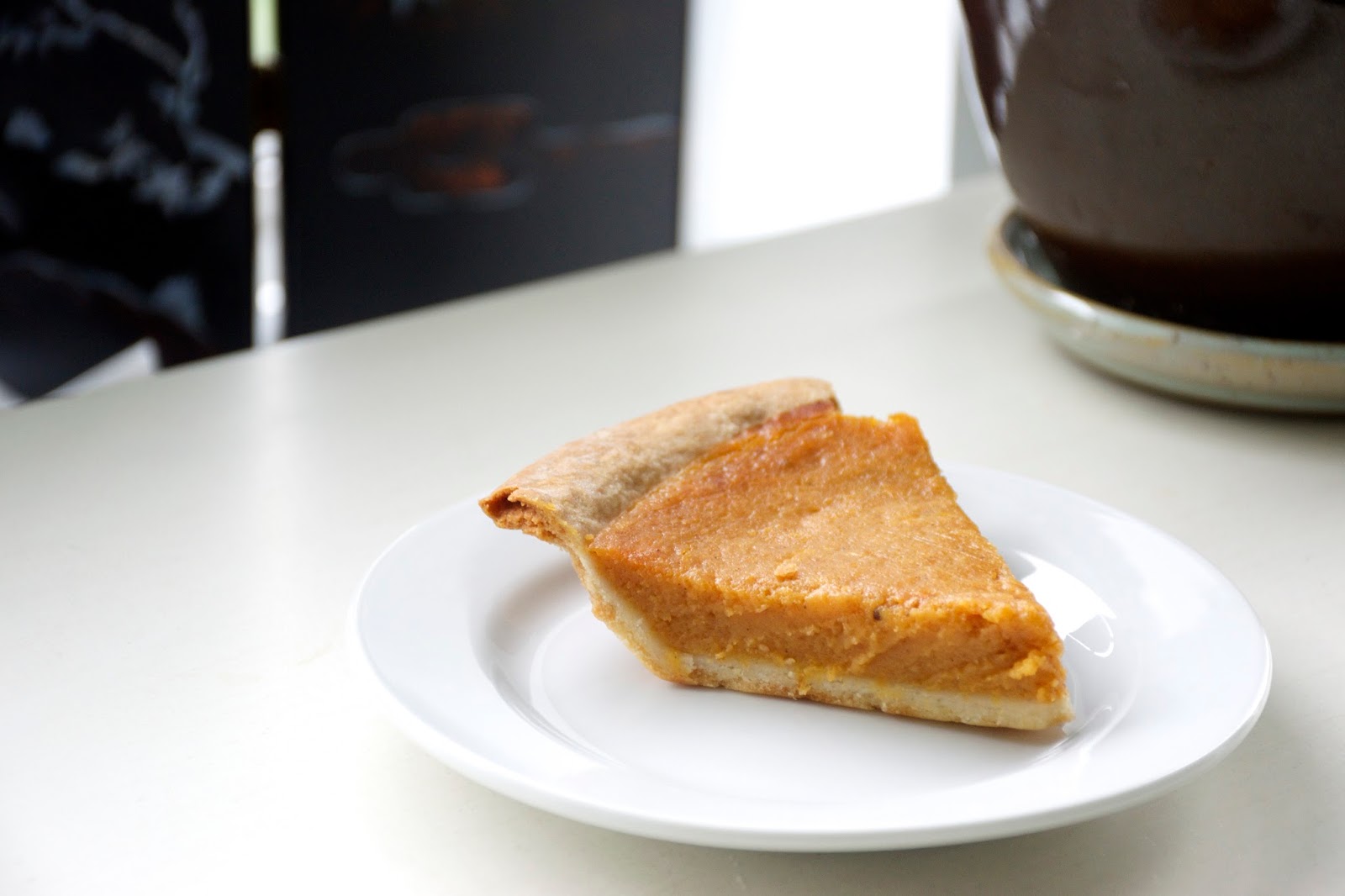 Pumpkin Pie
2/5 stars
My dad's turkey dinner also came with a slice of pumpkin or pecan pie! By the end we were already too full so we ended up packing this slice home! It was alright, similar to store bought pie. The pumpkin puree was mushy, and rather bland tasting. The crust was crumbly, nothing special 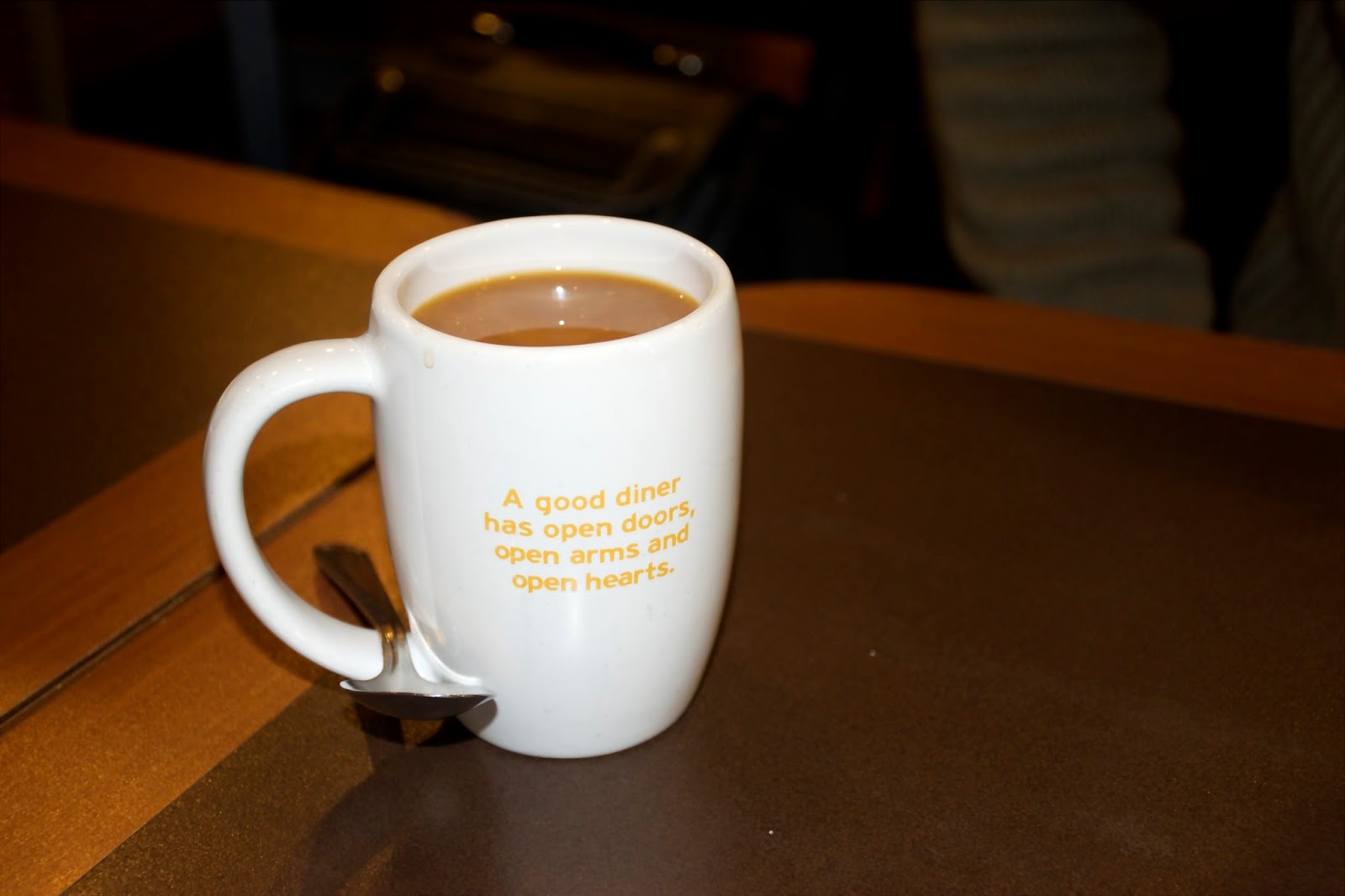 My dad also got a coffee because you get unlimited refills! LOL I like the saying on the cups! ;)