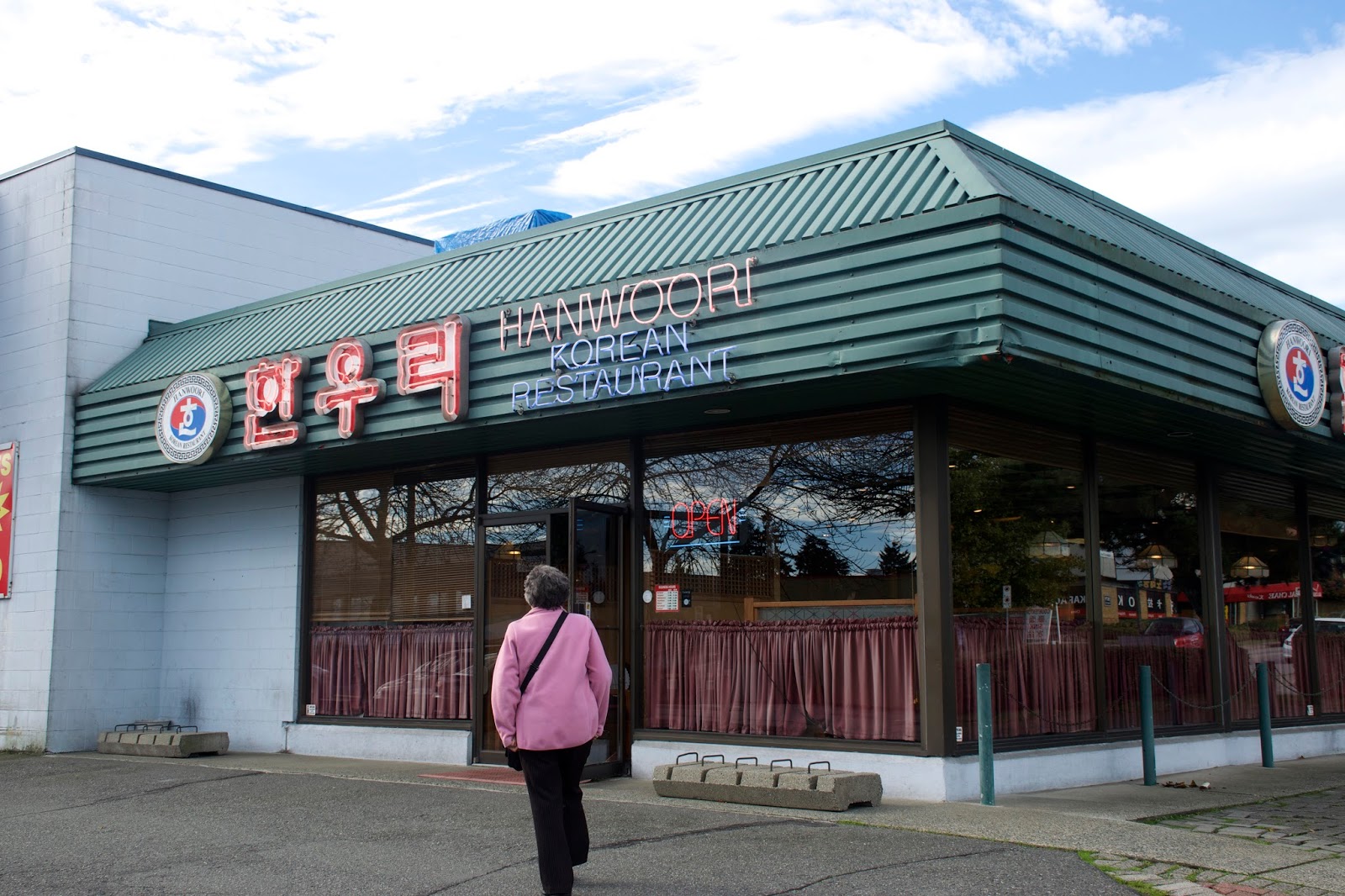 I always look forward to visiting my grandma on sundays after church, because we go FEASTING! LOL!! She's my partner in crime when it comes to trying out new restaurants! For an old asian lady (no offense to you if you're old LOL) she's a pretty adventurous eater! Most (if not all) of the retired asian folks that I know always go to the same restaurants, week after week haha. According to my grandma this is partly due to the fact that they can't really read English so they don't know what to order and because they were never exposed to food from other cultures growing up, so they're only use to eating chinese food.

When I go out with my grandma we rarely eat chinese food, because I'm the only person she knows that can introduce her to new, exotic, *sparkly* foods LOL! I've been wanting to try this place out ever since I read on Urbanspoon and Yelp that Hanwoori is supposedly the BEST Korean restaurant in Burnaby!

SIGNATURE DISHES
Hanwoori Korean is one of three Korean restaurants in Burnaby that specializes in Korean tabletop BBQ! The other two are Potter's Garden (which is across the street from them) and Cho Sun! They also have a ton of other staple Korean dishes like bulgogi, bibimpap,  naengmyeon, even fried rice!

SERVICE 3/5 stars
Service was really quick, but not particularly friendly by any means. They did their job, they fetched us extra plates at our request and were quick to fill our orders. Our food came fairly quickly and all at once, about 10 mins after we had placed our order! What's neat about Hanwoori is that they have a service call button on each table so you can press it if you want to get their attention!

AMBIANCE - Casual
The restaurant itself is modestly decorated with wooden panelling throughout. They have large booths along each side of the restaurant, and tatami rooms in the back for larger parties! The place is heavily ventilated with ventilation above each table for BBQueing! It's also really bright in there because they have windows spanning the entire room!

PRICE - $/$$/$$$
Let's face it, Korean food ain't cheap in Van LOL! Especially Korean BBQ lol! Hanwoori isn't the cheapest Korean place out there, but it's not the most expensive either. Small soups start at $10, larger dishes like their seafood pancake or noodle dishes are about $20, and BBQ combos start at $45!

We were really pleased with everything that we had! The portion sizes were huge, the food was well made, and reflective of the money that we had paid. They definitely don't skimp on the quality of their ingredients and it really shows! 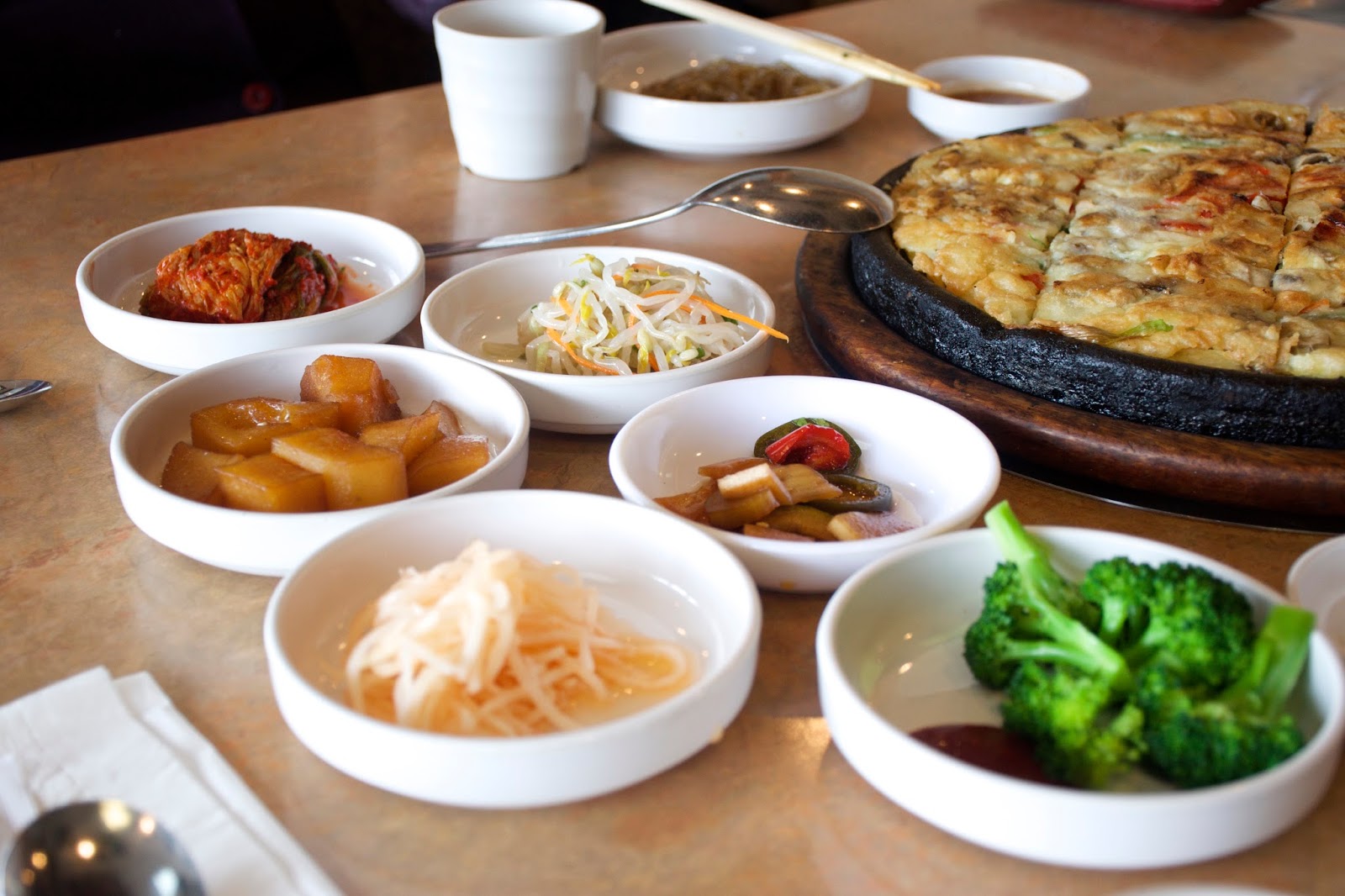 Banchan!
3.5/5 stars
Even though the banchan they serve you at most Korean places are relatively the same, there's a noticeable difference in the taste and quality at different restaurants. I really liked the banchan at Hanwoori! The sweet potatoes weren't sickly sweet, and the kimchi wasn't overly spicy, and more on the sweet side! The bean sprouts were well flavoured and the radish dish was seasoned with a savoury-sweet soy sauce! 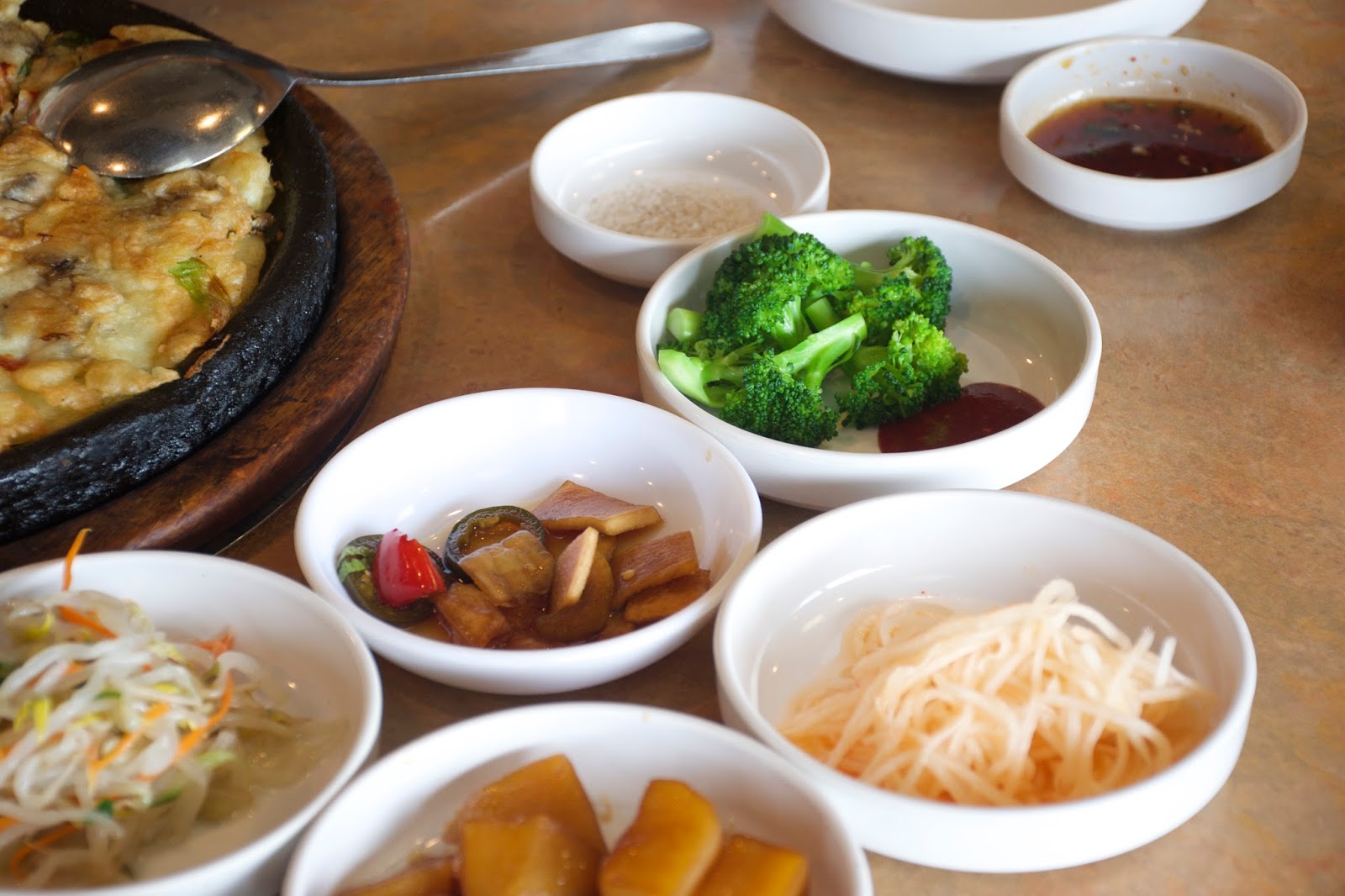 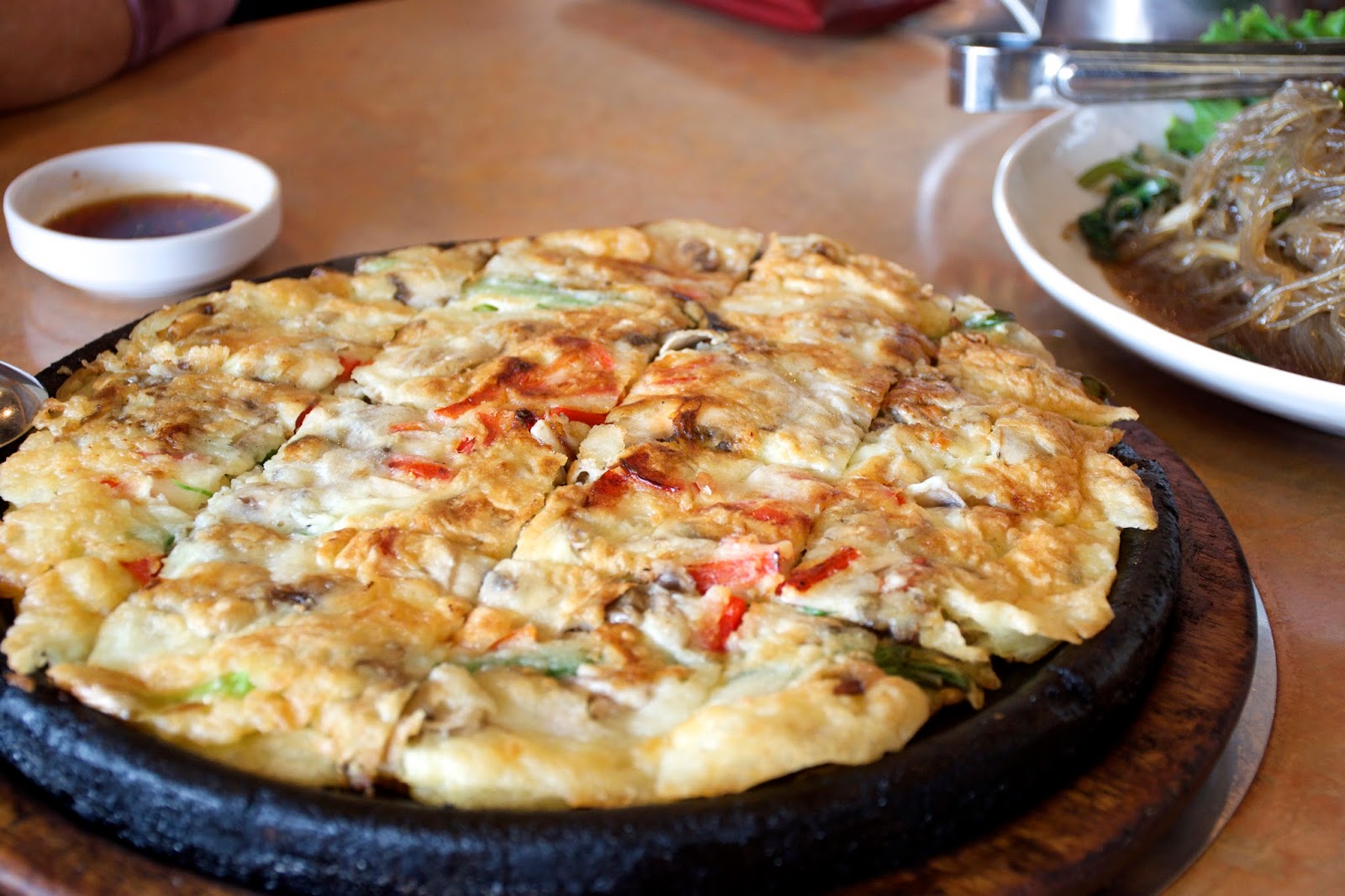 Haemool Pahjun - Seafood Pancake $20
3.5/5 stars
Everything table had a order of this haha! Definitely a crowd favourite, that's for sure. This came on a sizziling iron plate, which kept the contents hot for a long time. The pancake was crispy on the outside, soft on the inside, and not doughy at all! They didn't skimp out on the seafood either, there was a ton of crab, lobster, squid, and clam in there! It was modestly seasoned, which let the natural taste of the seafood really shine through. 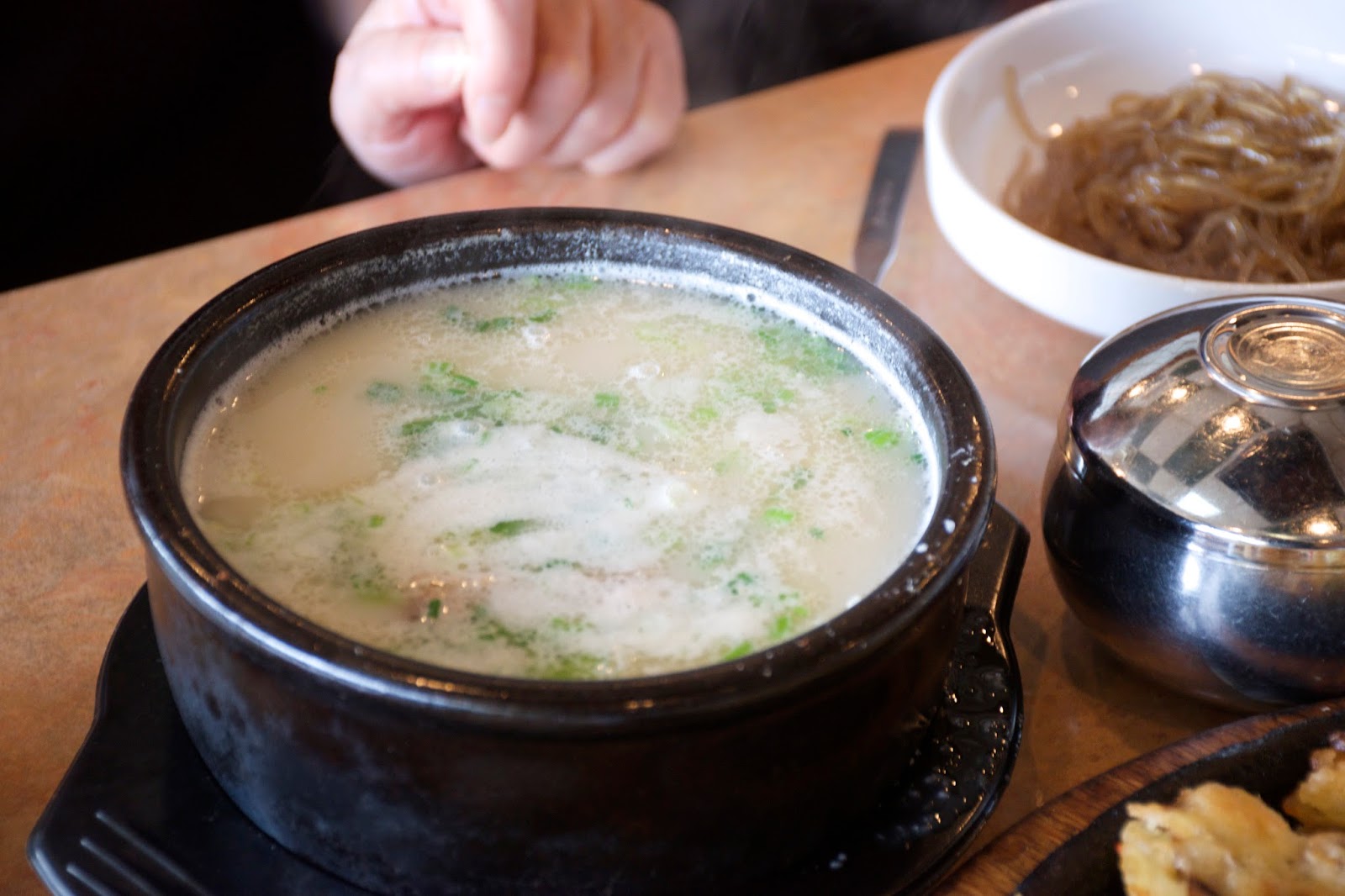 Gori Gom Tang - Oxtail Soup $12.50
3.5/5 stars
I read in a couple of other people's reviews that they thought this was bland but since my grandma wanted to order it we did! I think they changed the recipe because we both thought this was really well flavoured and we didn't think it needed any extra seasoning at all, even though it came with a side of salt! The broth was really fragrant, with a strong oxtail flavour, livened up with green onion! The oxtail itself was tender, but I had trouble picking it off LOL because it was stuck to the bone! 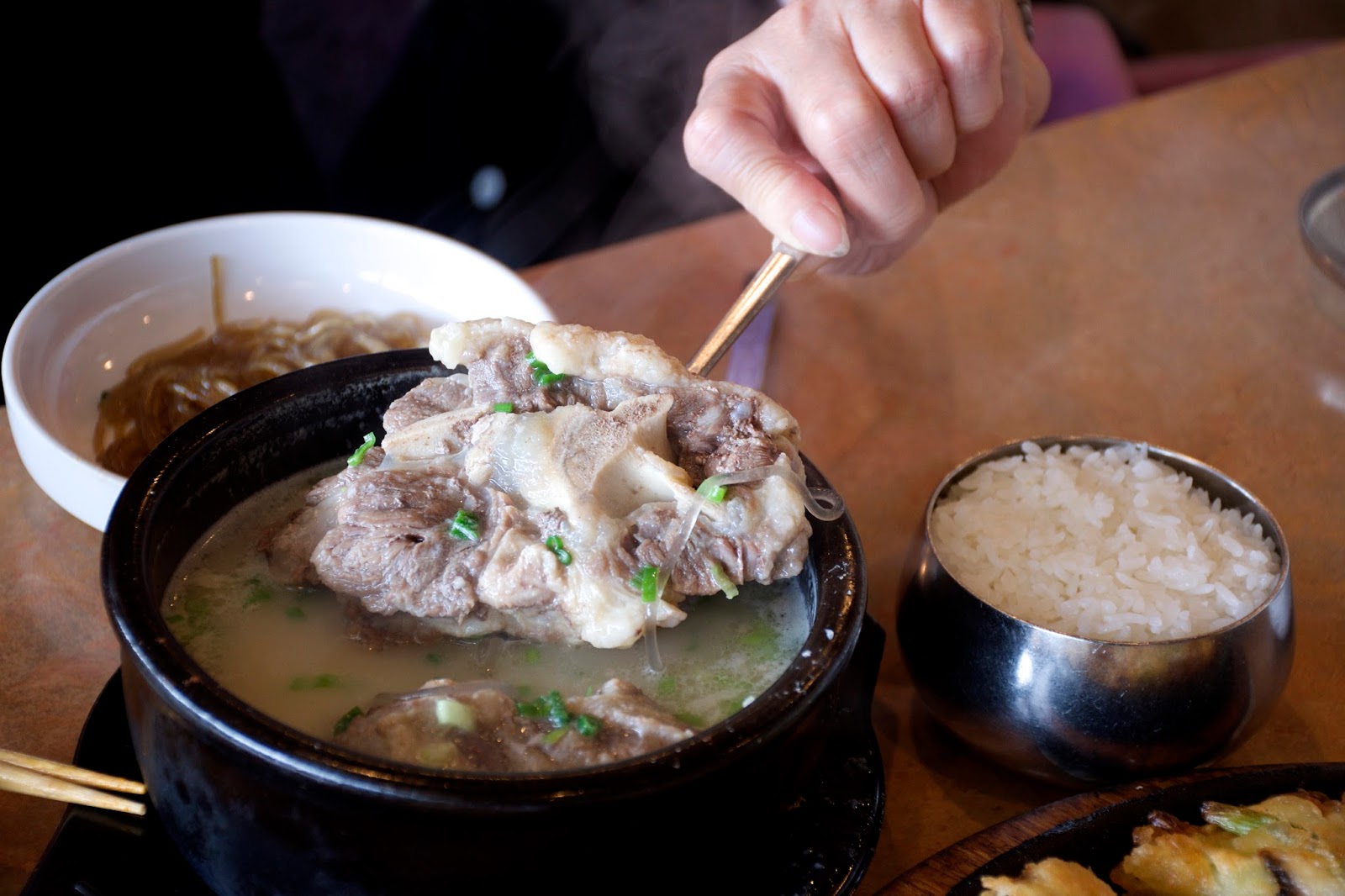 The soup came with two huge pieces of oxtail! :D 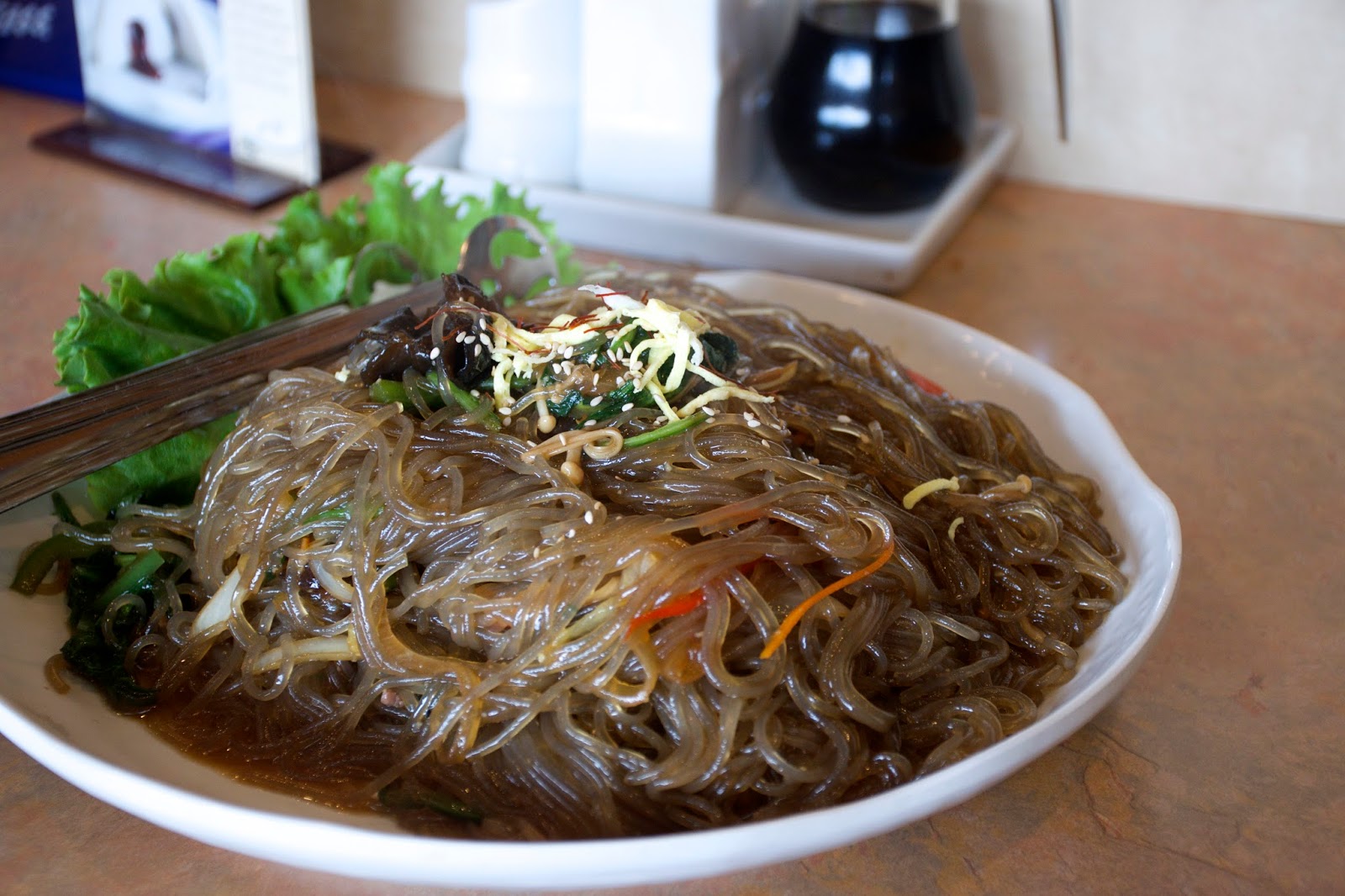 Japchae $17.95
4/5 stars
This was a great interpretation of japchae! We wanted to order a smaller size but this was the only size they had, and it was HUGE! No seriously, the picture doesn't due the size justice. It could have easily fed 6 people LOL! We ended up packing 3/4 of it home! The noodles were delightful: cooked al dente, bouncy, with bite! The entire dish was well seasoned with a sweet-savoury japchae sauce!! 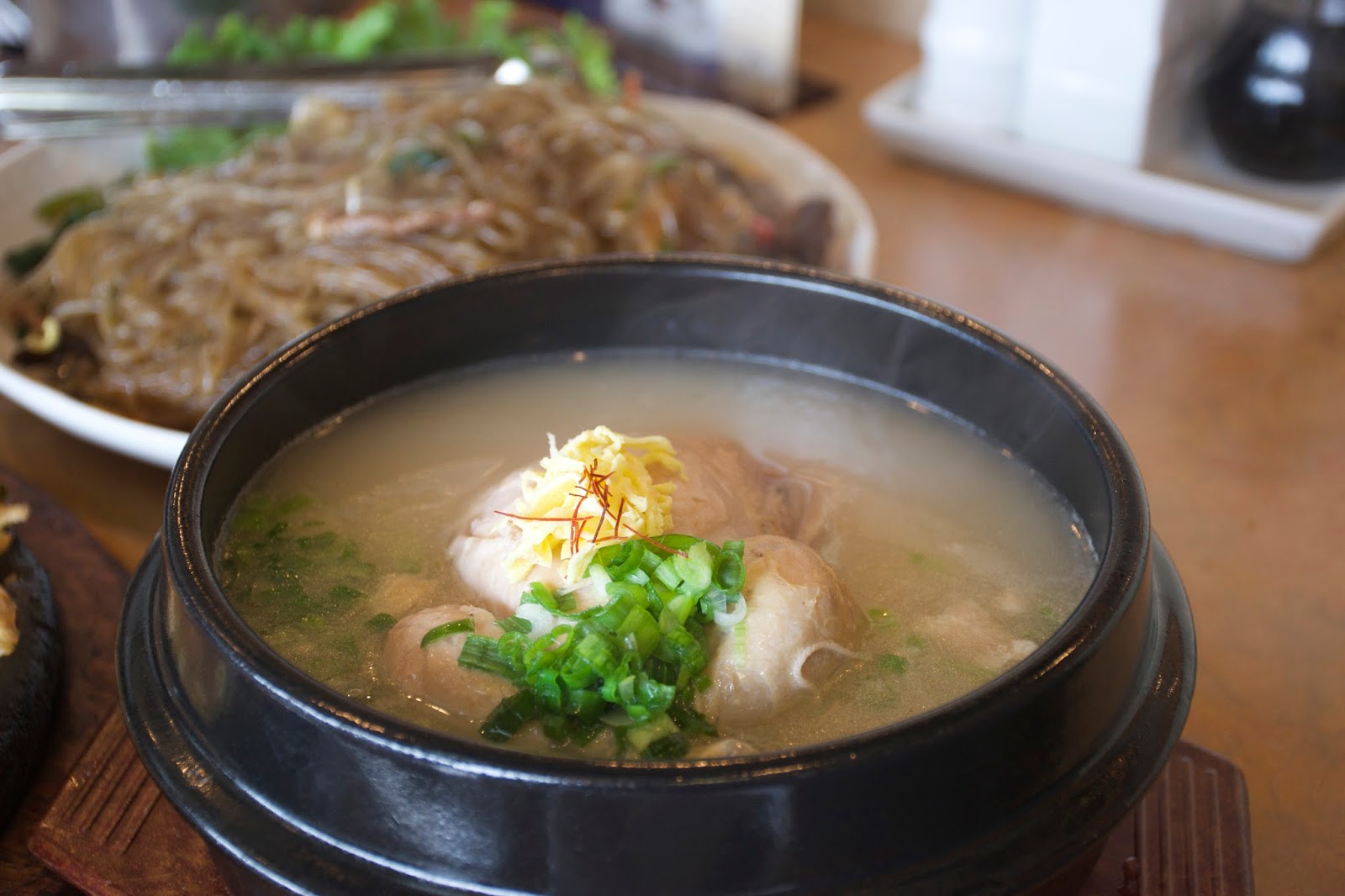 This is something I probably wouldn't have ordered myself LOL, because I'm too much of a cheapskate! ;) But my grandma wanted to order it so we did! The broth was lovely: smooth, heavy on the ginseng, with an underlying chicken flavour. Although modestly seasoned, it was perfect the way it was, no seasoning required! 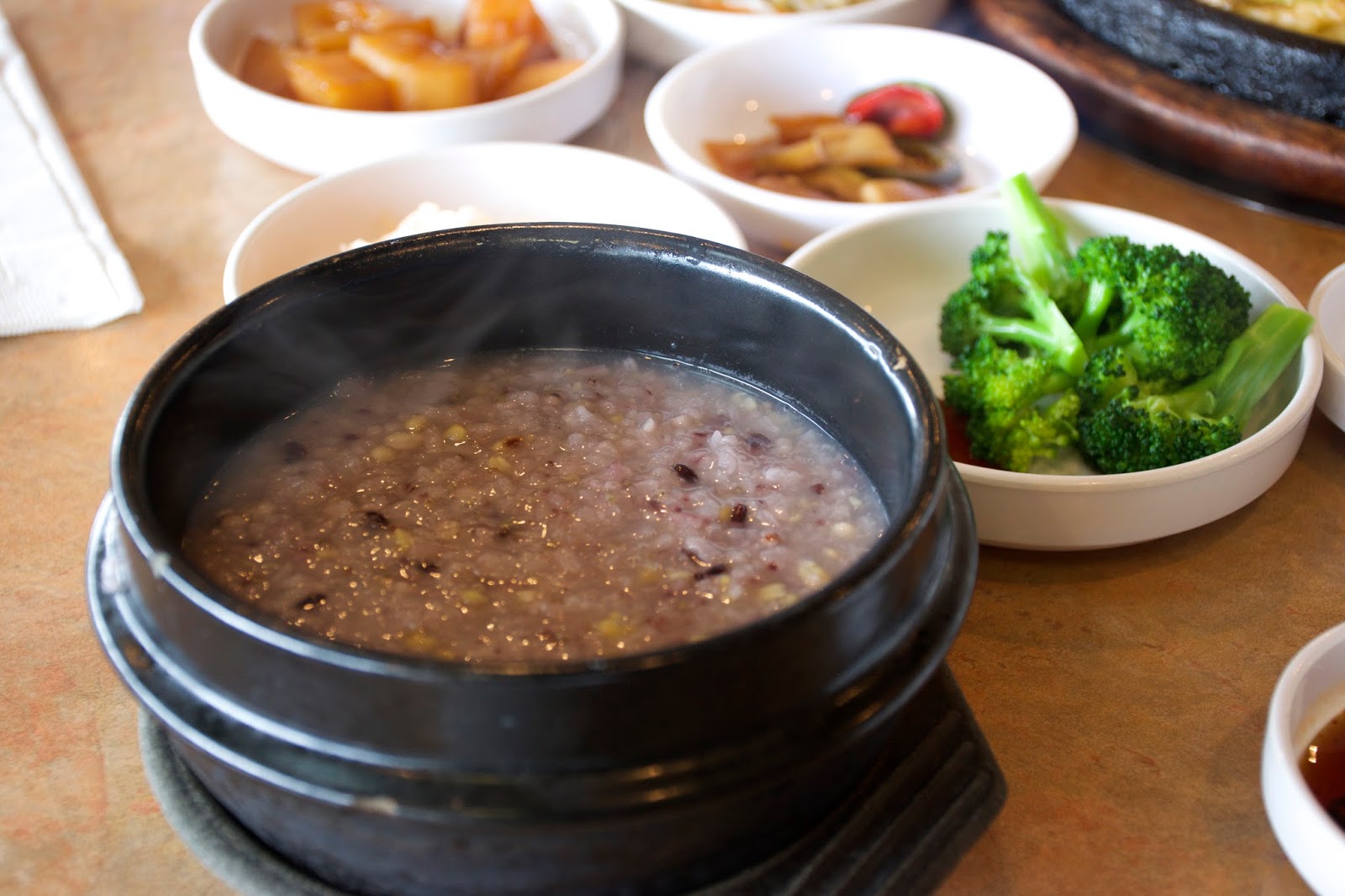 Congee that came with the Samgyetang
Apparently this is suppose to go in the samgyetang, because when the waitress brought it over she explained to us that the chef had forgotten to put this in! 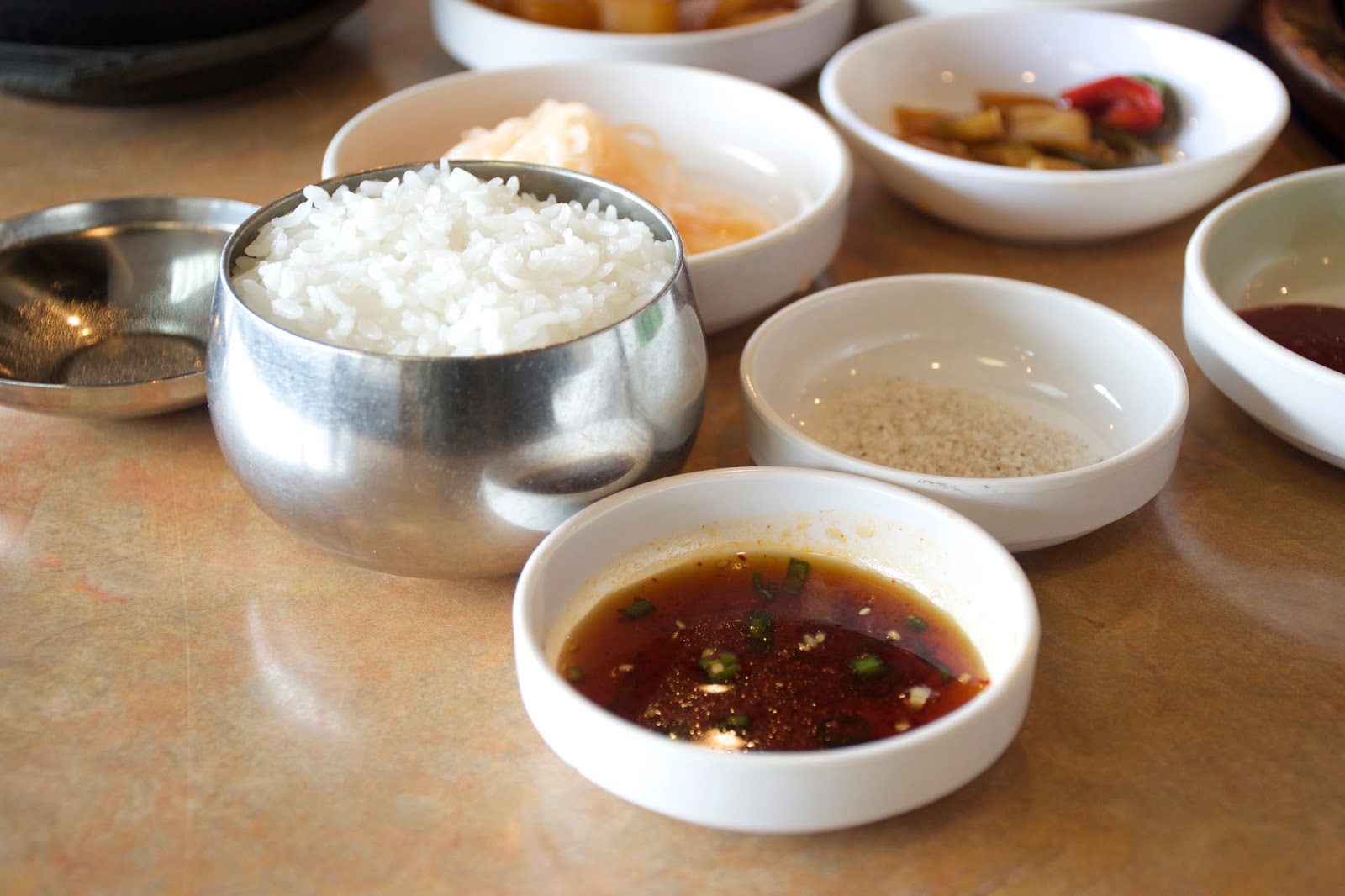 Rice and condiments
The bowl that the rice came in looked deceivingly small, until I dumped out the contents into a larger bowl! There was soo much rice in there that I couldn't finish it (which is a rarity for me LOL!) We also got some condiments on the side for our seafood pancake. The salt they gave us was the coarser kind, with pepper mixed in! The soy sauce was really sour and a bit sweet!