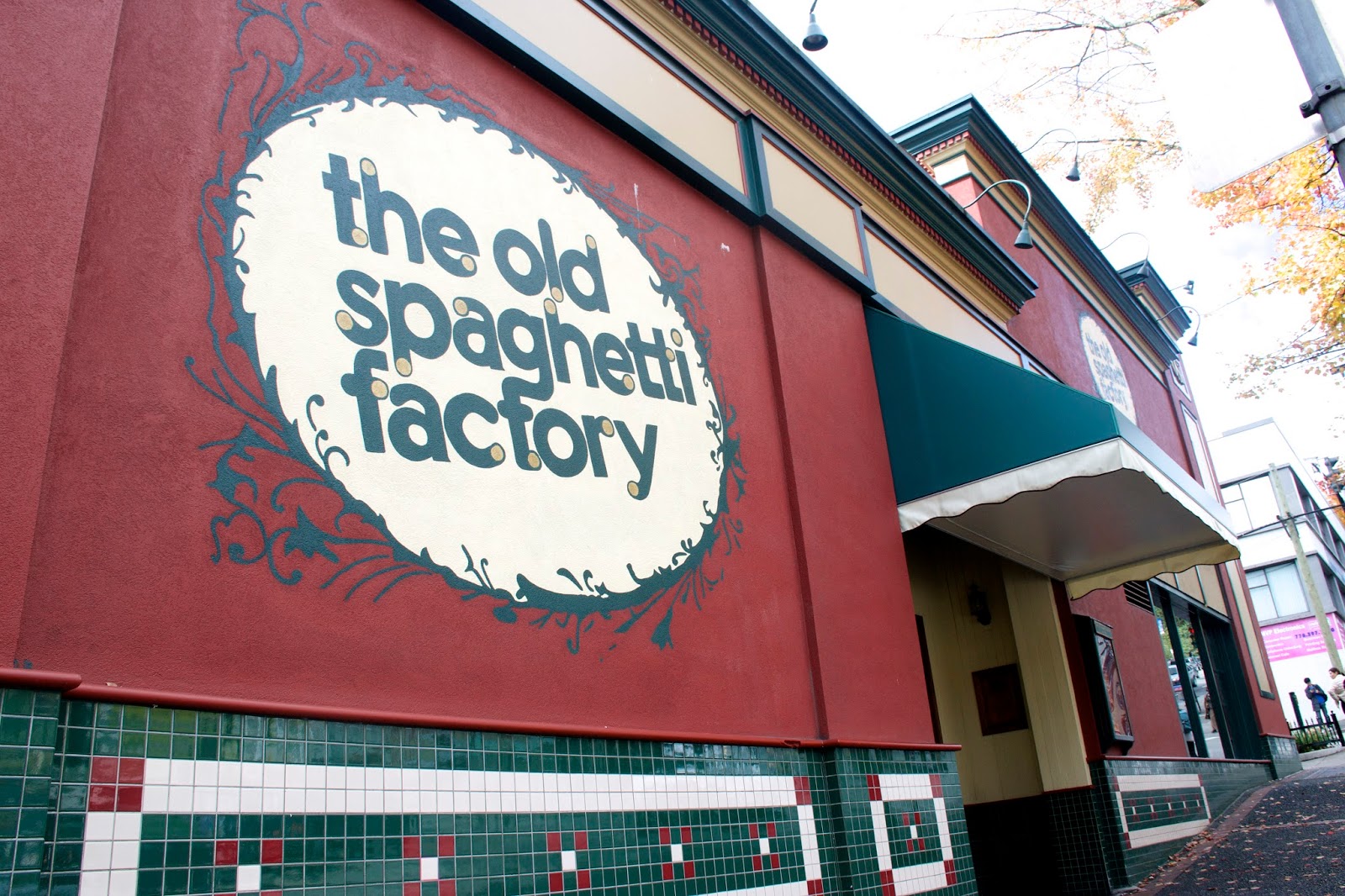 You guys may find this suprising, but I've NEVER been to the Old Spaghetti Factory before LOL...despite having lived in Vancouver my whole life! Yess, I'm a failed Vancouverite *hangs head in shame* But hey, I have my reasons LOL! My parents tried bringing me here when I was a kid but I broke out in hives just from touching the tabletops because they had been contaminated with traces of butter/milk LOL! Which also explains why I've only eaten at White Spot once (last year) despite the fact that I'm a BC kid LOL! Which also meant that I could never go to birthday parties at Boston Pizza or Red Robbin hahaha, so after a while kids just stopped inviting me...yep, I suree was popular.

Anyways, the day before I went to the Old Spaghetti Factory to live out my 2nd grade dream!! LOL! Yes, I vividly remember when I first heard about the OSF in the 2nd grade, my mom went to eat there with a friend, and she came back and told me about it! Alas, the OSF was so close, yet so far. I've heard so much about this place. Mainly bad things, but hey, this place is a classic! Needless to say, I was really excited about trying out the infamous OSF!

SIGNATURE DISHES
The OSF is infamous for their spaghetti LOL! No, it's not real Italian food, but who's expecting an Ask for Luigi anyways? Admit it, you don't come here for the spaghetti, you come here for purely nostalgic reasons LOL!! ...that, or the unlimited sourdough bread ;)

SERVICE 4/5 stars
The service I received was great! The waitress was genuinely nice, attentive, and came back to ask multiple times if I was enjoying my meal! After I had ordered I was brought bread immediately, which kept me preoccupied for 10 mins while I waited for my spaghetti LOL! My soup came shortly after, along with my tea, and my spaghetti came last!

AMBIANCE - Casual
The decor in here is really dated, but comforting, in a weird way LOL! It's like visiting your grandma's house haha! They have a huge train in the middle of the restaurant, with tables inside, which I thought was really neat!  Since the restaurant was pretty empty the waitress let me sit at a booth table and the chairs were really comfy!

Okayy, it's not authentic Italian food, but you to admit this place is pretty good value for the money LOL! Unlimited bread just seals the deal LOL!  It's unpretentious and predictable, which makes it a great place for families! 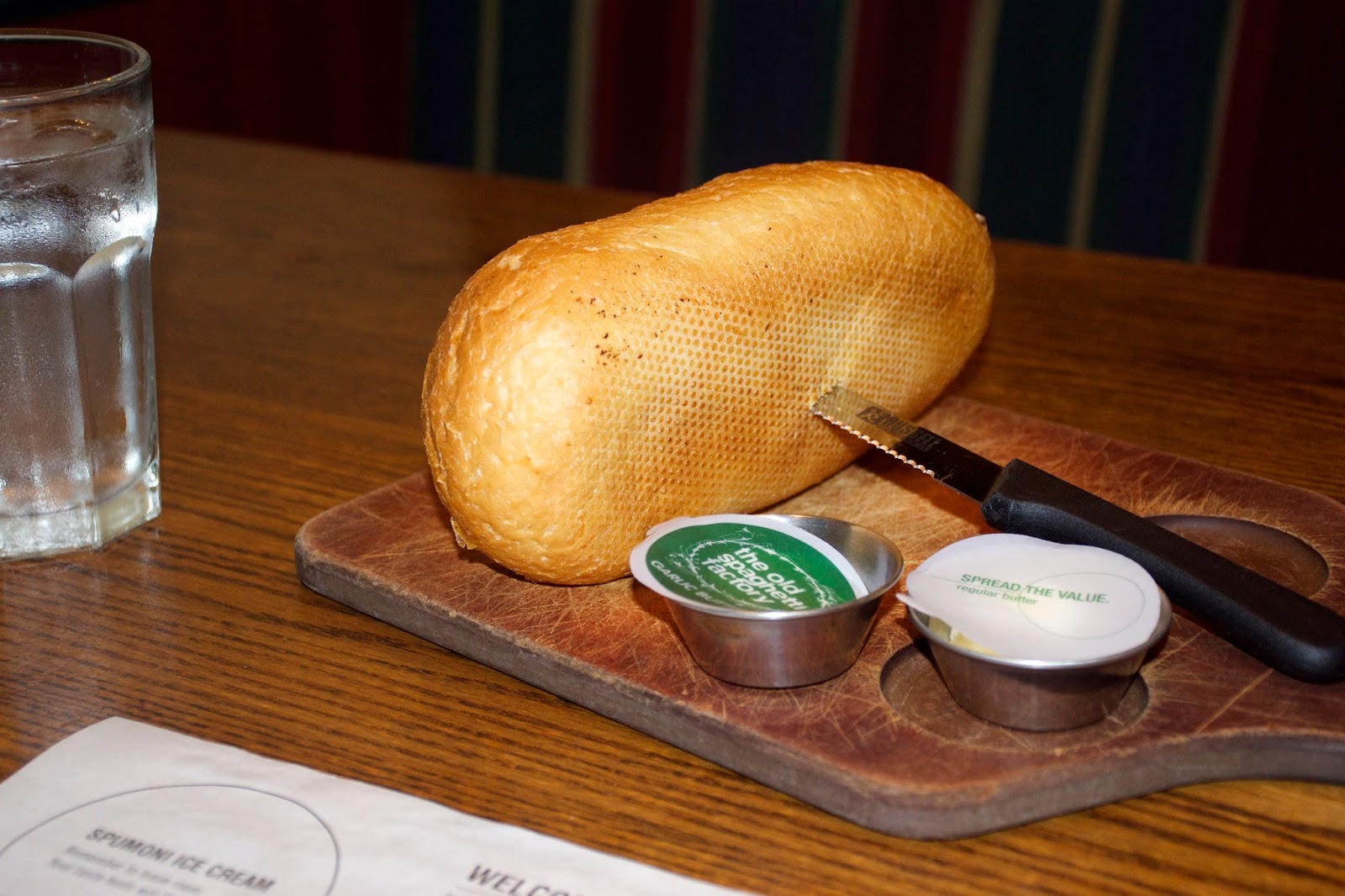 Complimentary Sourdough Bread w/ Garlic Butter + Regular Butter
Bread: 3/5 stars
Garlic Butter: 2/5 stars
So this is what they're famous for eh? For complimentary bread, it's not too shabby! The loaf was huge, and I managed to polish off the whole thing LOL...oops! The bread came out warm, the inside was really fluffy and soft with a strong sourdough flavour, and the exterior was really crunchy!
It also came with a side of garlic butter and regular butter! The garlic butter was actually pretty tasty, the garlic flavour wasn't too strong, which I liked. 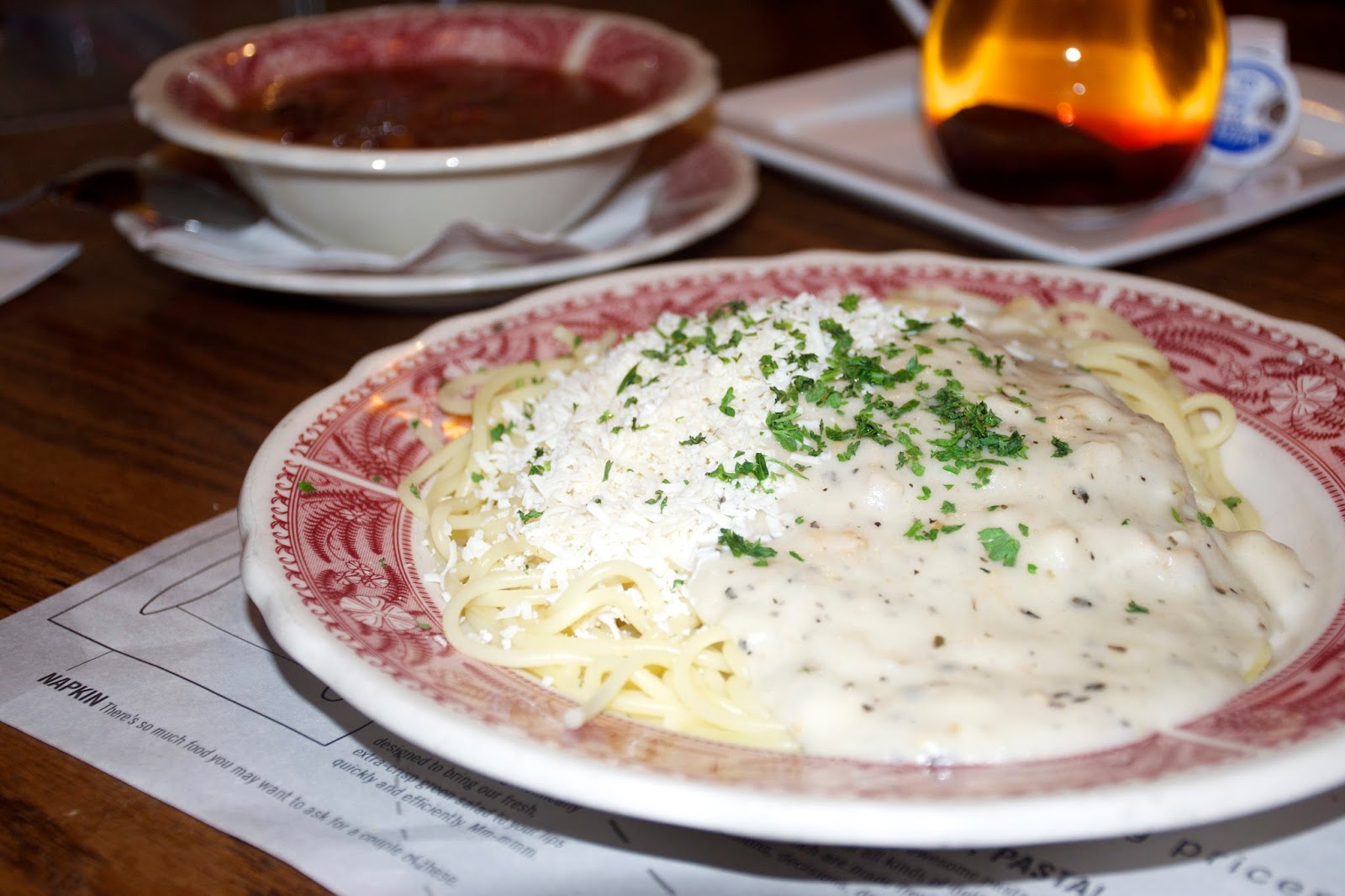 Managers Special - Brown Butter + Miritzia Cheese (Left) Clam Sauce (Right) $12.25
Brown Butter: 3/5 stars
Clam Sauce: 1.5/5 stars
Since I wanted more of a variety, I got their managers special, which lets you choose two types of sauce for your spaghetti! I went with the brown butter and the clam sauce! The brown butter was my favourite out of the two, it was really well seasoned, and heavy on the cheese. The clam sauce was alright, flavour wise it was a bit weak and  too gloppy and starchy in texture. The noodles were kinda overcooked and not al dente at all LOL...I like my noodles to have bite! ;) 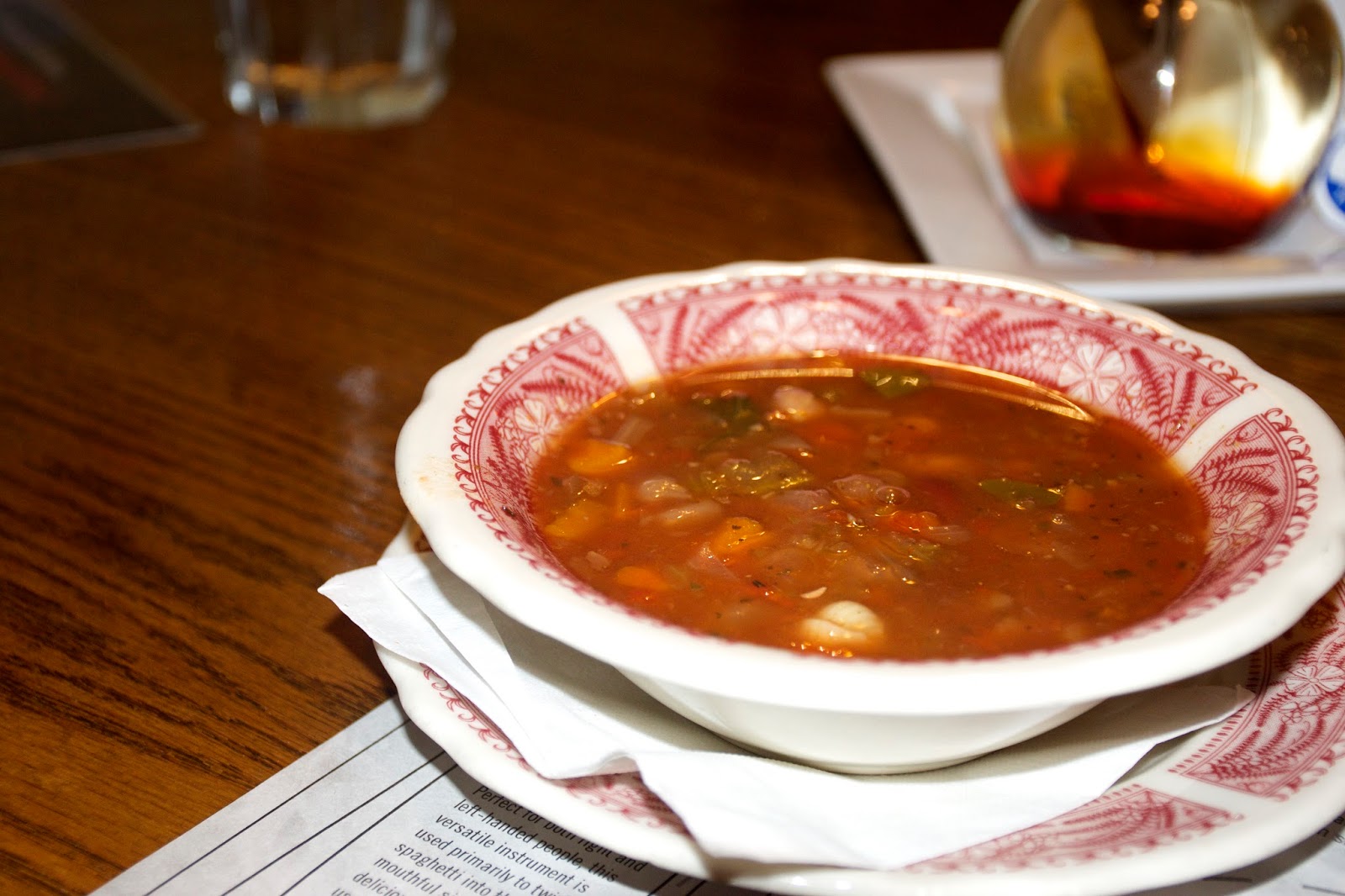 Milestones Soup
3/5 stars
This was actually pretty decent! You have a choice of soup or salad, and I went with the soup! It had a ton of veggies in it, and little bits of pasta! The soup was predominately tomato flavoured, heavy on the pepper, and rather sour. 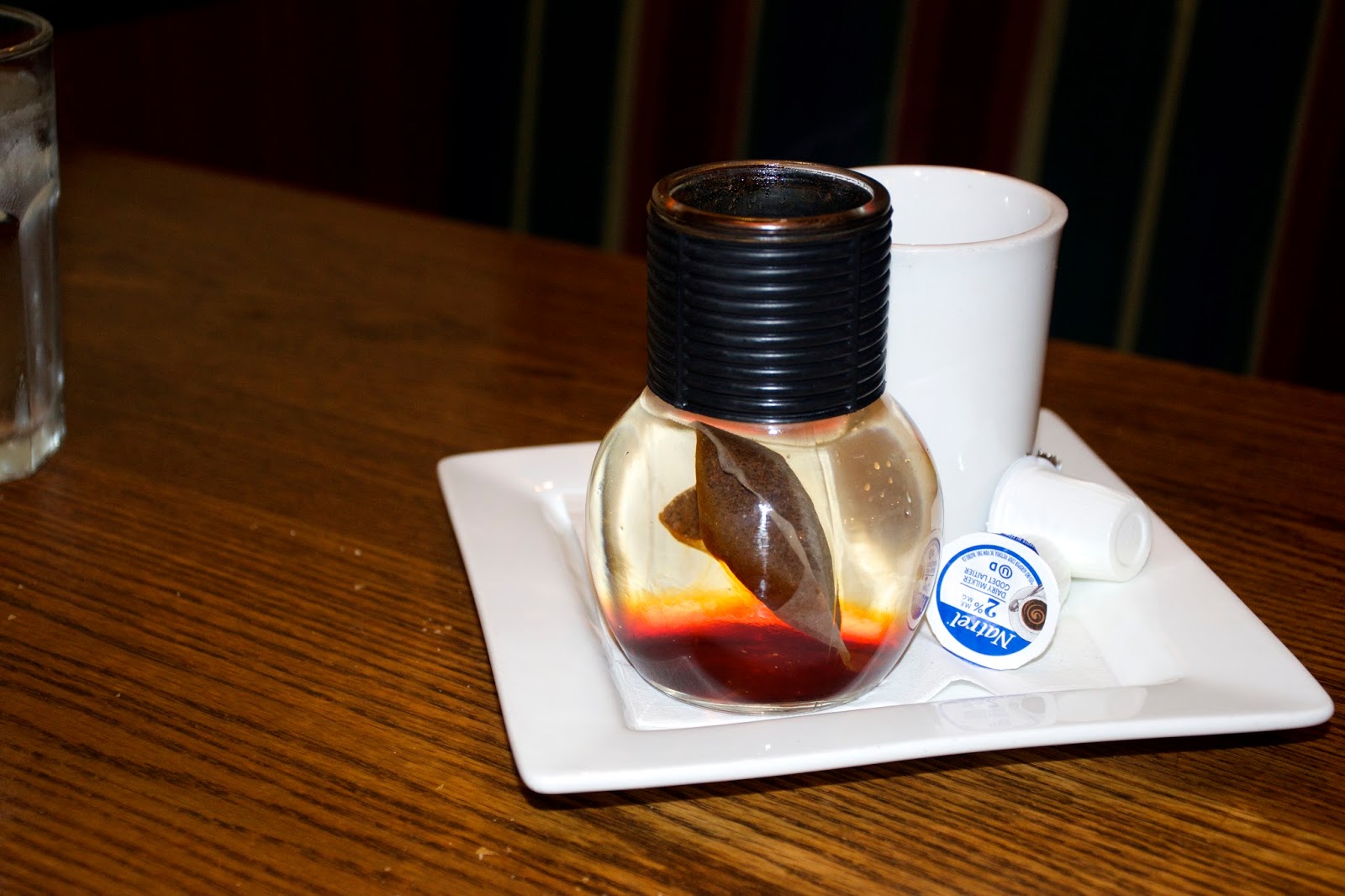 Tea
2/5 stars
Every meal also comes with a hot drink, and I got their tea! It came in this really cool looking lightbulb shaped glass LOL! The meal also includes icecream for dessert but I didn't want to risk an allergic reaction in case the icecream had modified milk ingredients in it haha, so I passed!