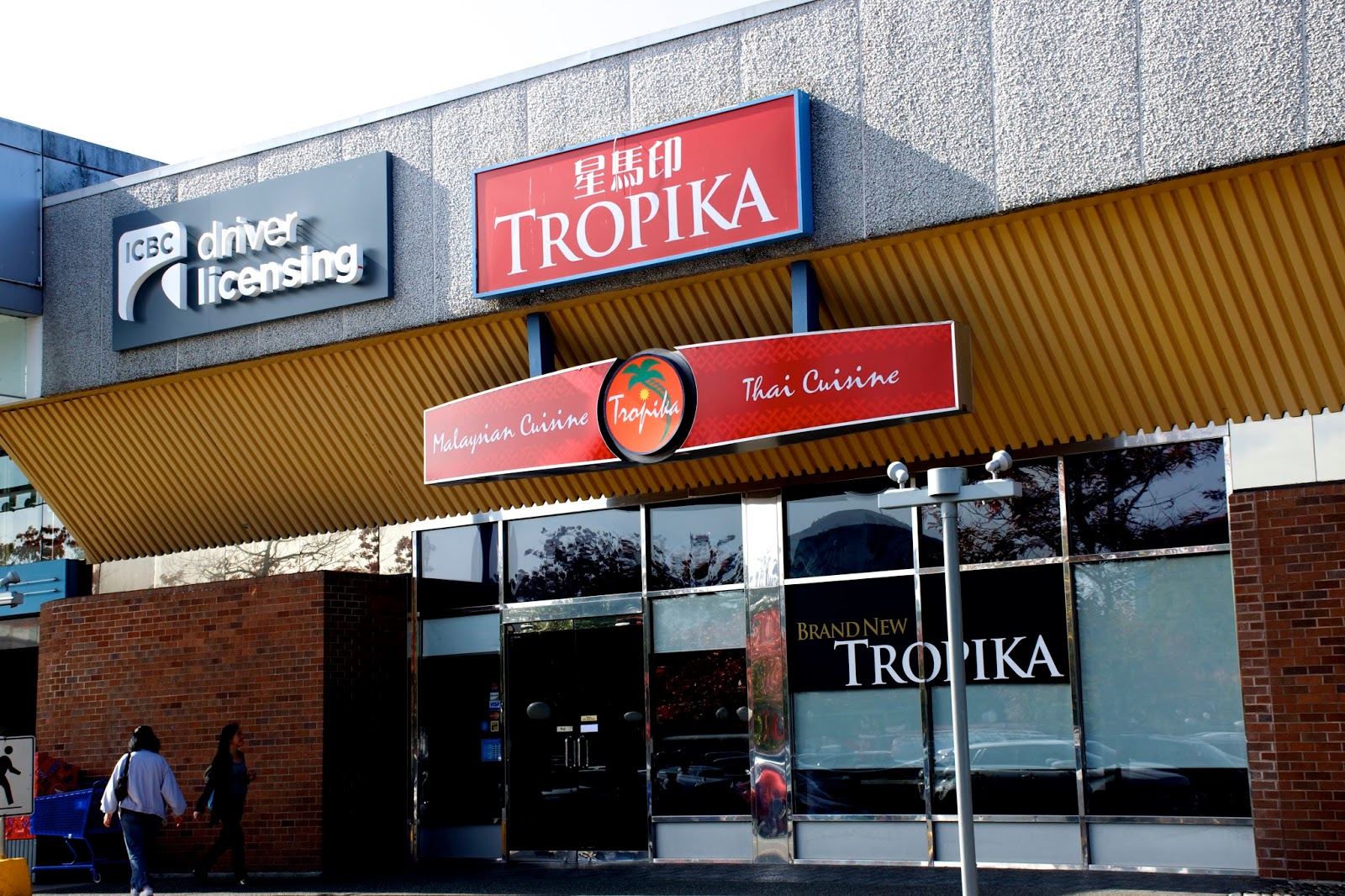 After writing my midterm yesterday my dad came to pick me up and we headed over to landsdowne! He wanted to take me there to familiarize myself with the surroundings because my N drivers test is next thursday...AFTER MY THIRD MIDTERM. My stress meter for this week is definitely at an all time high LOL! Any tips for passing my driving test guys? :)

My dad had originally wanted to go to South Ocean for dim sum (AGAIN?!!) but I pleaded with him "Dad, I just wrote an excruciating midterm consisting of no multiple choice questions!!" LOL! Out of pity he gave in and agreed to go somewhere other than south ocean (thank da Lord!) He actually wanted to go to Little Sheep for hotpot but since it was actually pretty hot yesterday, I didn't want hotpot so I suggested Tropika instead (which happens to be beside ICBC!) Welll, turns out that this was a smart decision because my dad liked the food and said that he'll come back! :D


SIGNATURE DISHES
Tropika specializes in Malaysian, Singaporean, and Thai food and they're probably the most well known South Asian restaurant in all of Vancouver!! They have a couple of locations throughout the GVR, the only other one I've been too is their robson location!

SERVICE 4/5 stars
Service was surprisingly friendly (we're in richmond afterall LOL!) The guy serving us was polite, and he even smiled! He came around to refill our water and clear up our finished plates! After we had finished he packed up the food for us, we thanked him and he said "Not a problem at all!"

AMBIANCE - Casual
Even though the decor looks semi upscale, I would still classify this as a casual restaurant because of the prices and the clientele here. The restaurant is nicely decorated, with booth seating at the centre for larger groups and single tables near the windows for couples.

PRICE - $/$$/$$$
If you go at lunch, Tropika is really affordable! Most of the lunch combos range from $8-15, which isn't bad at all! The entree menu isn't that pricey either, neither are the appetizers!

The portion sizes here are quite large, more than enough for one person, or two, if you have a smaller appetite. They don't skimp out on the meat, and everything tastes fresh! 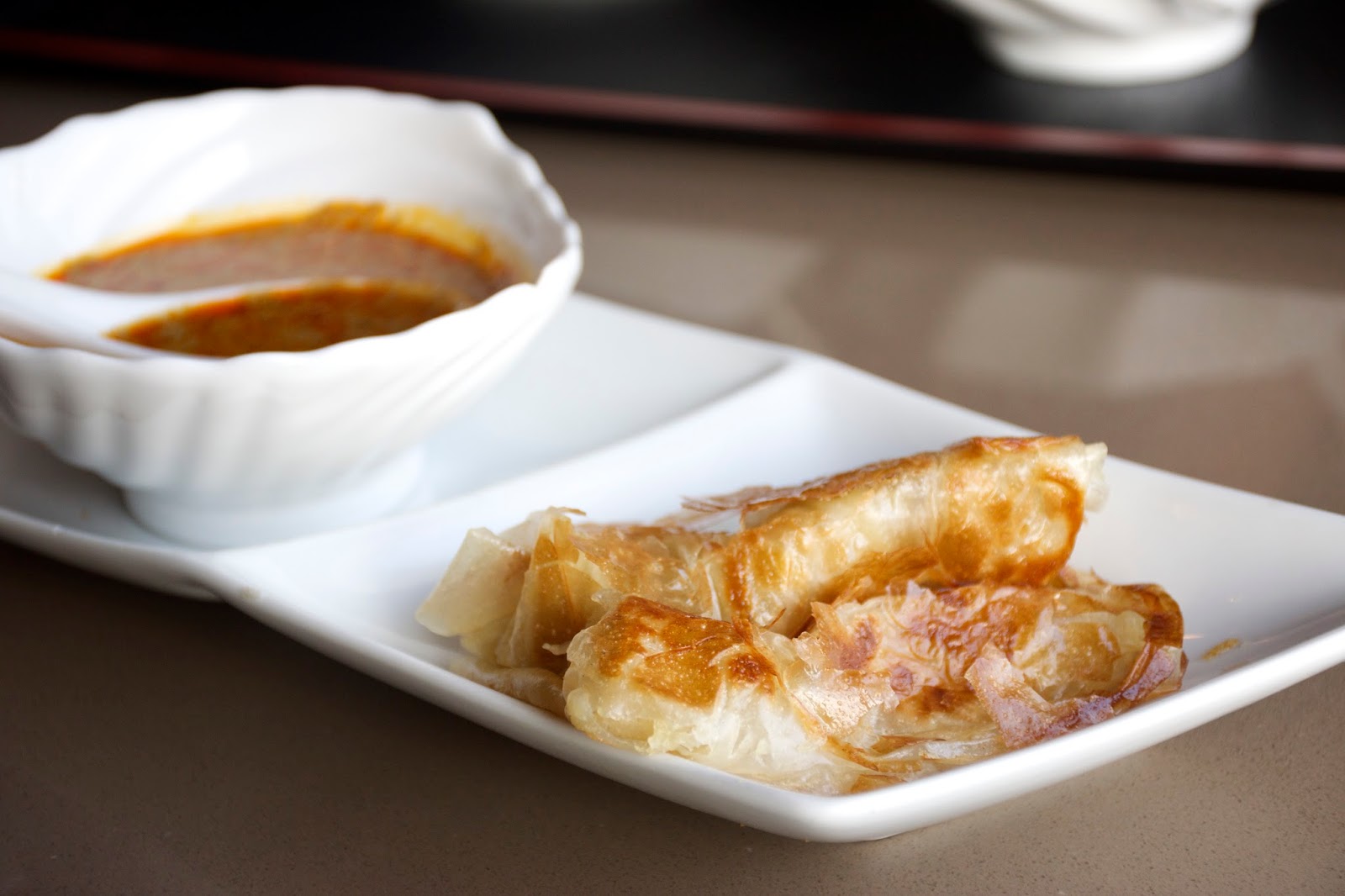 Roti Canai $2.80
3/5 stars
This is the dish everyone orders here LOL! At $2.80, how could you not? It came with 2 pieces of roti, and a side of curry. Not a bad deal! The roti was nice and flakey, and crispy on the outside. It was a little on the thick side and tasted sweet. It was decent, but not the best roti canai I've ever had! 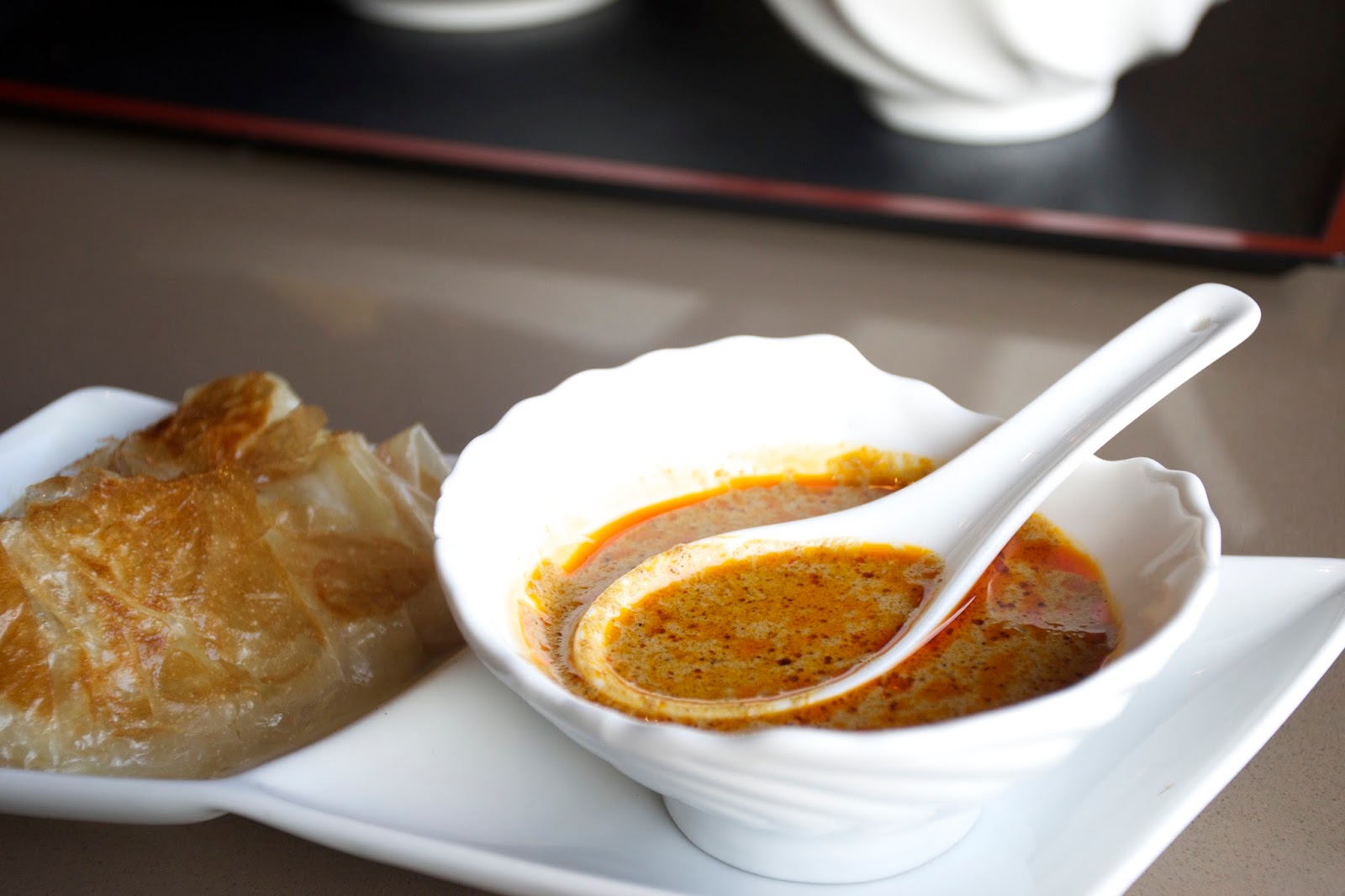 Curry
1.5/5 stars
The curry tasted really odd LOL, not my cup of tea. It was also way too oily, you can see the film of oil on top! It was rather creamy but wasn't that spicy. 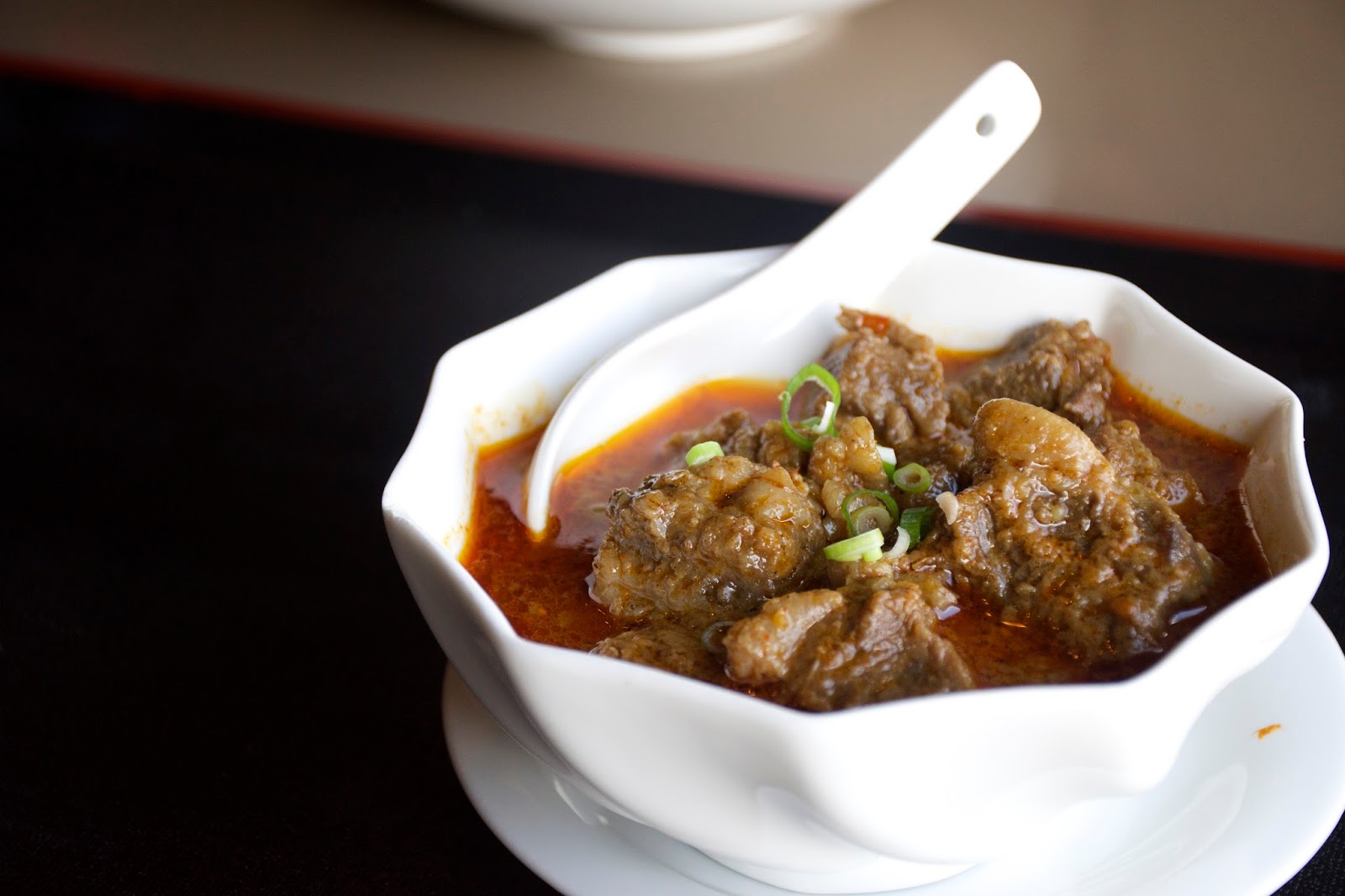 Beef Rendang Combo $9.50
3/5 stars
My dad had this and he really enjoyed it haha! The curry was nice and flavourful (albeit rather oily) with the beef being tender and easy to chew! There was actually quite a lot of meat in there! The sauce had just the right amount of kick without being too spicy. 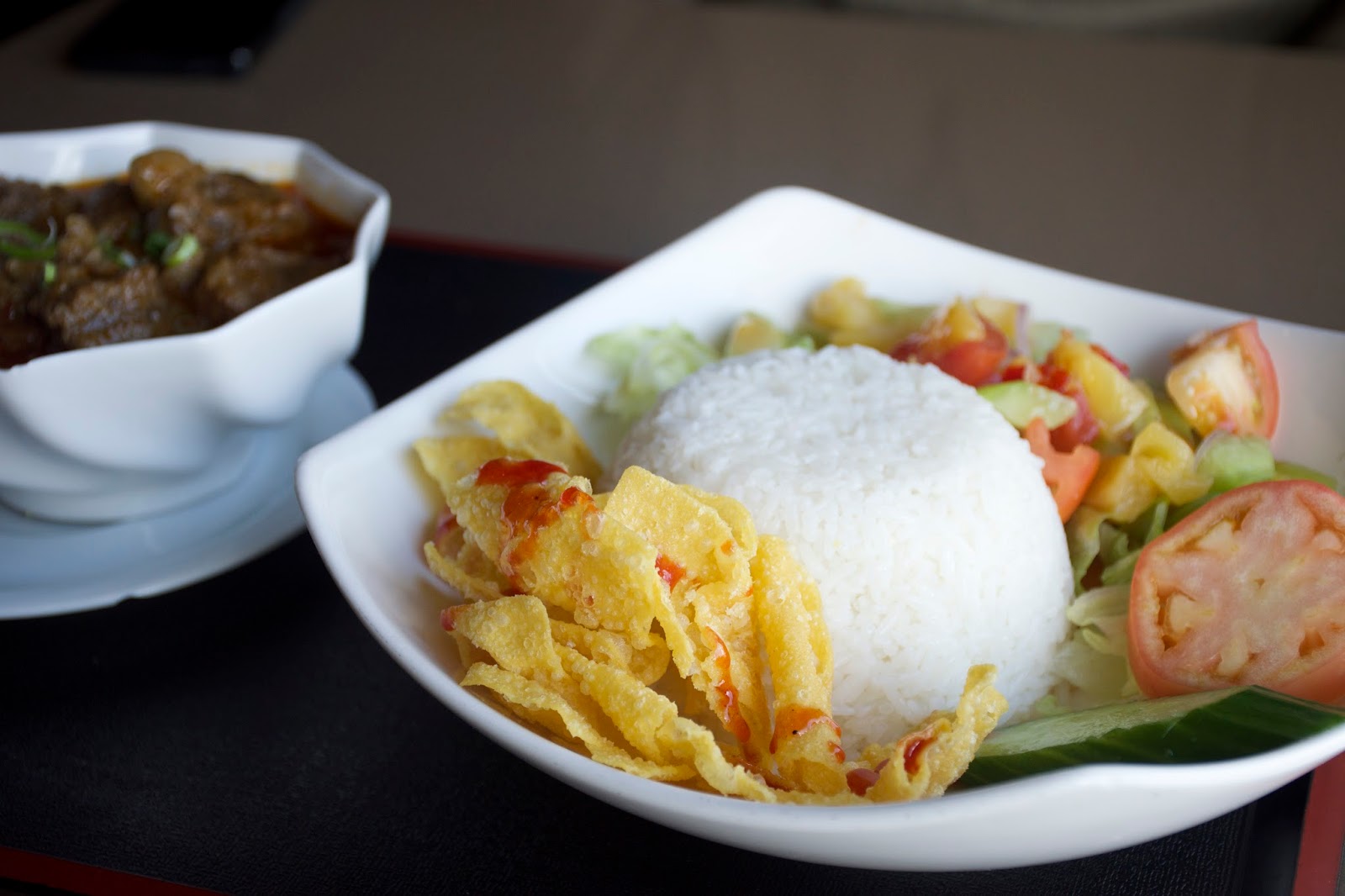 Rice & Chips
2/5 stars
You have the option to choose what kind of rice you want and my dad went with coconut rice. His combo also came with some chips and veggies on the side! The chips were crunchy and drizzled with a red sauce lol. The veggies were reasonably fresh and balanced out the heaviness of the meat. 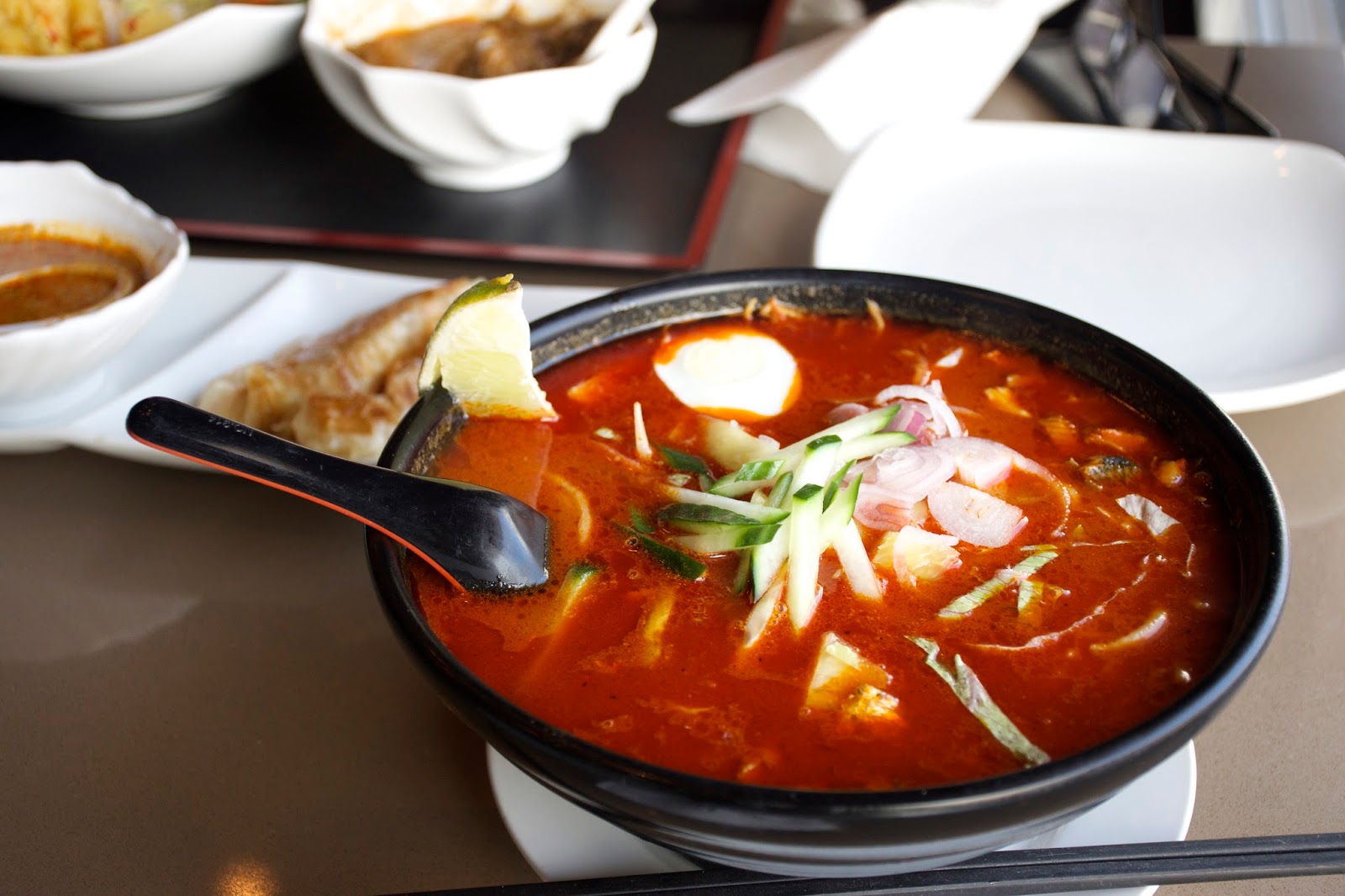 Penang Assam Laska w/ thick rice vermicelli $8.50
2/5 stars
This is what I had! My dad did not approve LOL! He kept telling me to order a meat dish (so we could get our moneys worth LOL!)  Since I love laska, I wanted to try this version out! It was decent, but not as good as I was expecting! The soup base was really sour and one note. Similar to tom yum soup. The soup base is suppose to be made out of fish but I couldn't detect any fish flavour whatsoever. There were chunks of fish and veggies in there though! The noodles were a bit too soft for my liking, I like my noodles al dente haha! And the name said "thick noodles." Not sure if the noodles (below) would be considered thick lol. There was plenty of it though and I ended up packing half of it home! 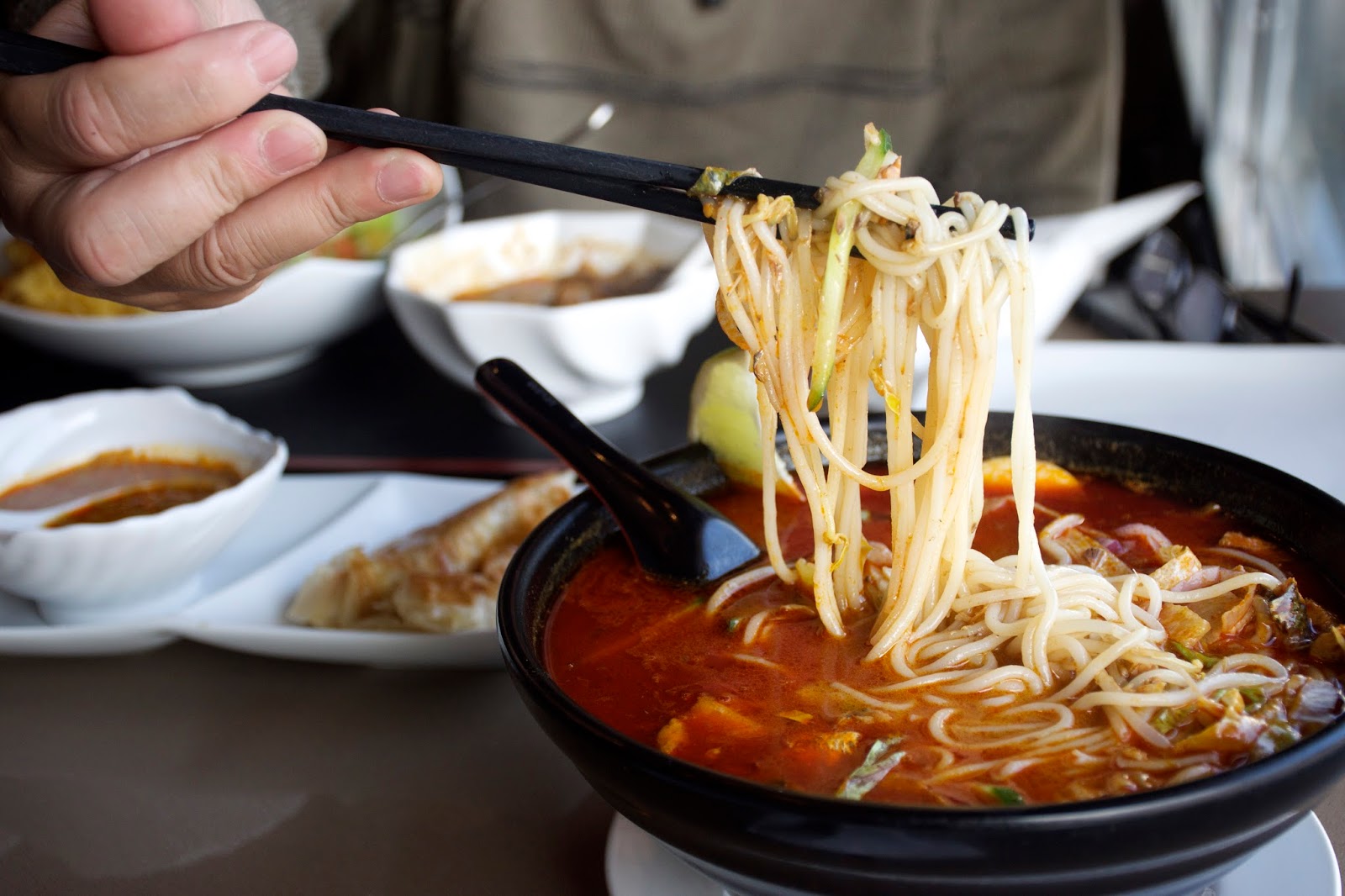