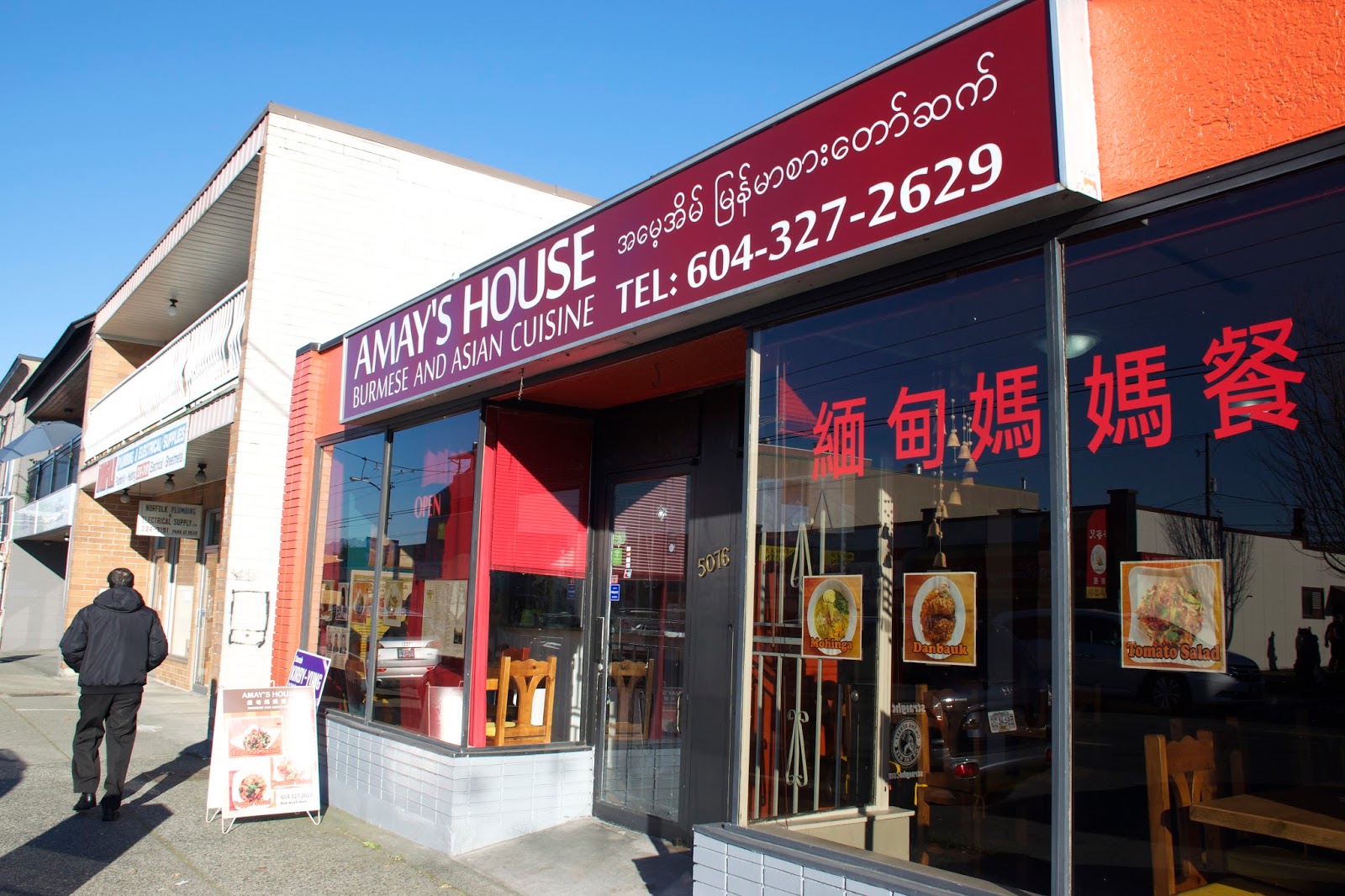 Sundays are splurge days for my grandma and I LOL! We go feasting and my grandma always end up ordering wayy too much food for 2 people haha...and no, we don't end up finishing it and we usually pack most of it home which lasts us for the next 2 meals lol! I'm so bummed that in a few weeks she's going back to Taiwan for half of year...but she's coming back in March, so until then, no more sunday feasts *sadface*

Anyways, I've been wanting to try out Burmese food in a while! I've never had Burmese food before so for my first venture into Burmese cuisine, I decided to check out Amay's on Victoria Drive, which is one of the highest rated Burmese restaurants in Vancouver! There actually aren't that many Burmese restaurants here in Van, they're definitely underrepresented compared to other South Asian cuisines!

The service we received was...with lack of a better word, amazing lol! We were served by who I presumed to be the owners, and they were super friendly and accommodating the whole time! They even chatted with us, and the guy told us that he's actually Fujian (Chinese), but he grew up in Burma! He took out his wallet to show us his mom's chinese name that he had written on a piece of paper! He got along really well with my grandma and he said that she looked like his mom LOL! At the end of our meal he even gave us a free side of soup and took the samosas off of our bill!! My grandma gave them her seal of approval and told me to rate them 5 stars on my blog! lmaoo 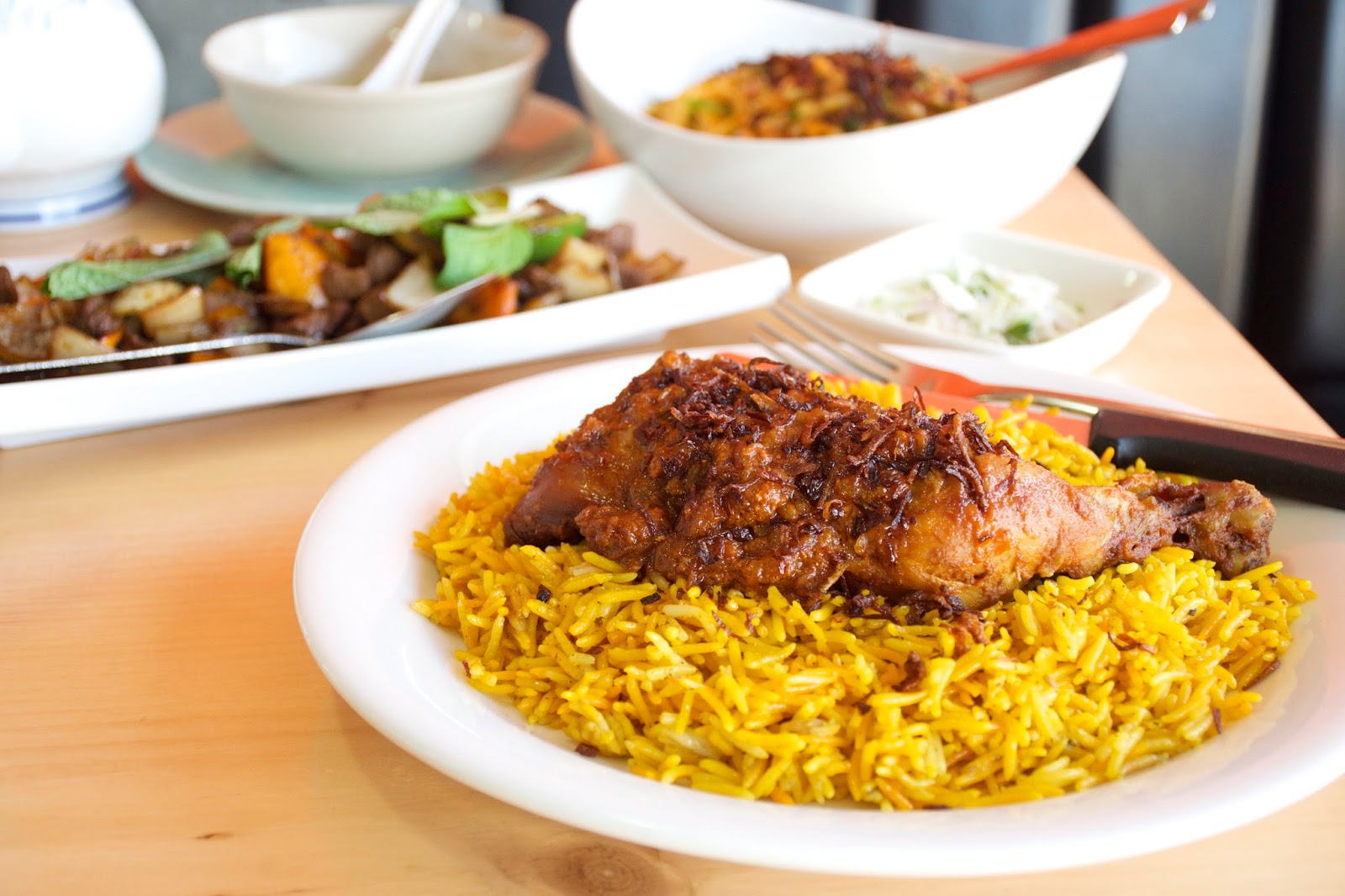 Burmese Style Biryani
3/5 stars
This plate was huge and it came with 2 large pieces of chicken! The rice was super fragrant and fluffy, the grains were separated and didn't stick together! The chicken was sweet-savoury and dosed with a ton of spices! The inside was moist and not dry at all! 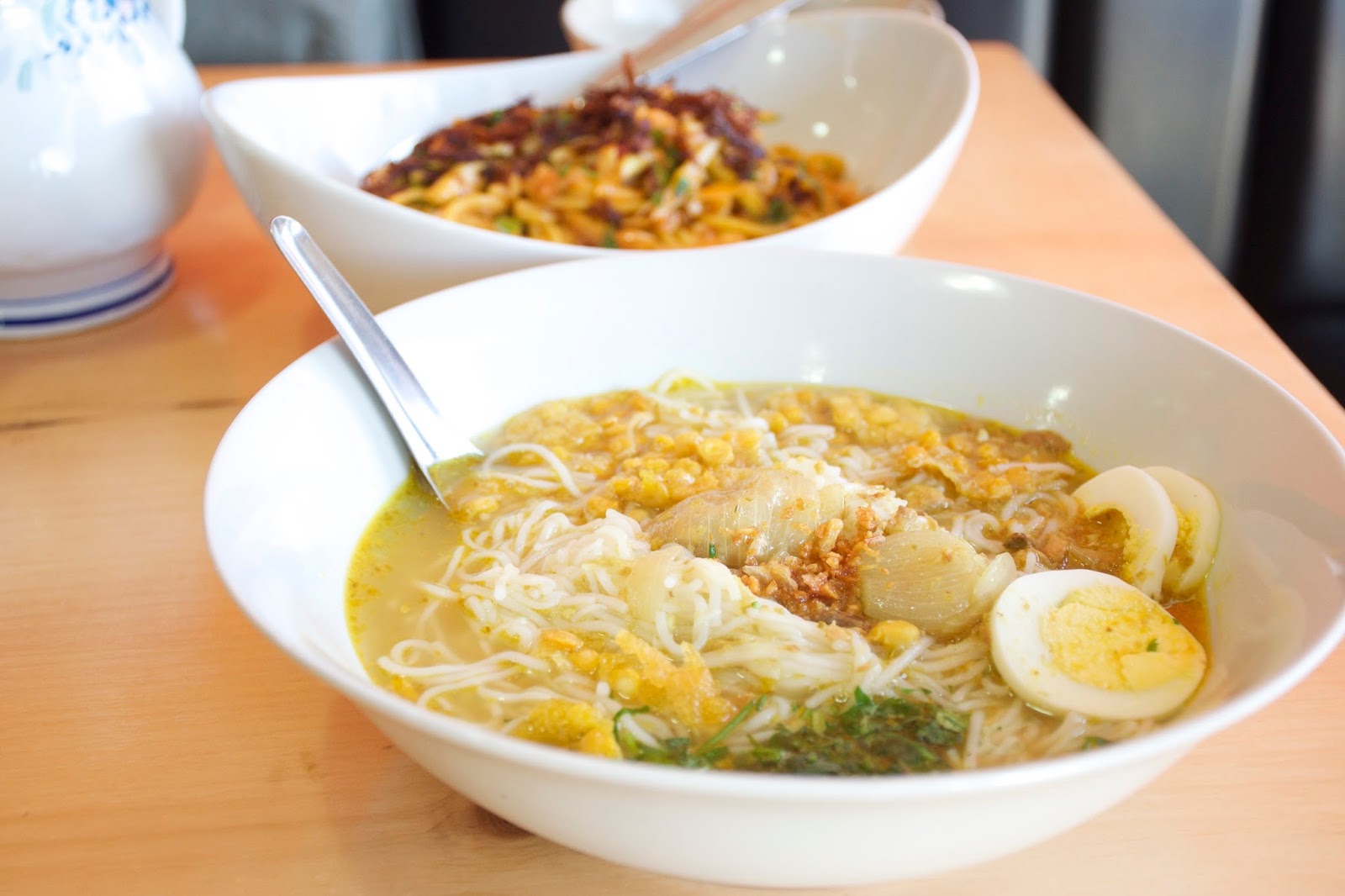 Mohingo Fish Noodle Soup
3/5 stars
This was pretty good as well! The broth was delicately seasoned without being overly salty, which let the natural flavours of the fish really shine through. The soy bean crisps on top was an interesting contrast to the soft noodles. The rice noodles were soft and cooked just right, and soaked up all of the flavours of the soup beautifully. 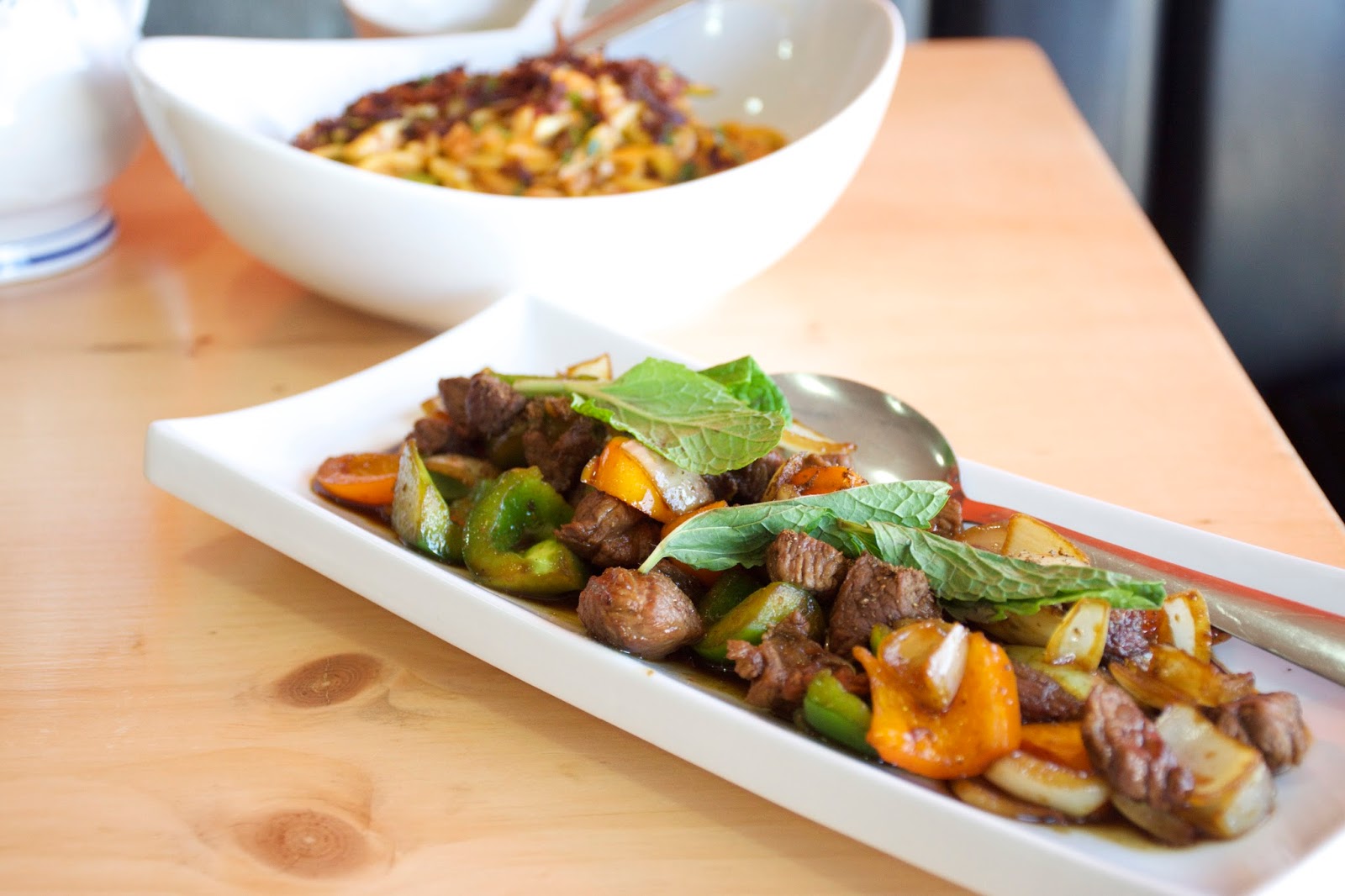 Stir Fried Lamb
4/5 stars
This was probably my favourite dish of the meal! The dish was a wonderful mix of sweet and savoury flavours, and combined with the basil, it was delicious! The lamb pieces were rather lean and diced into small pieces. The vegetables were crunchy, and the onions added an extra punch of flavour! 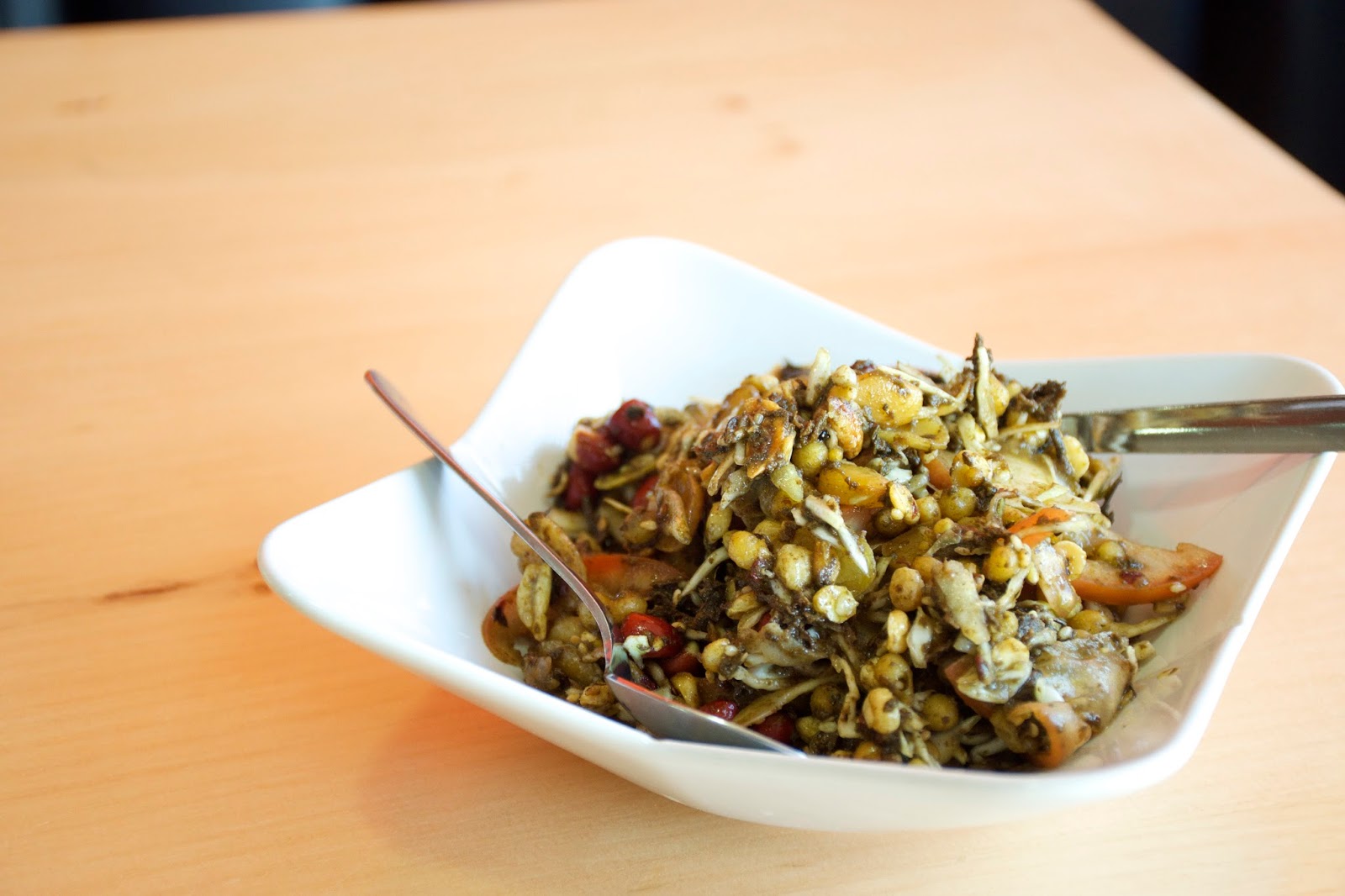 Tea Leaf Salad
3.5/5 stars
When we were ordering I didn't realize this had peanuts in it LOL...so I didn't end up having any. But my grandma said the tea flavour was actually really subtle, because it was overpowered by the other spices. It was really salty, and the peanuts were a nice contrast to the mushiness of the other ingredients. 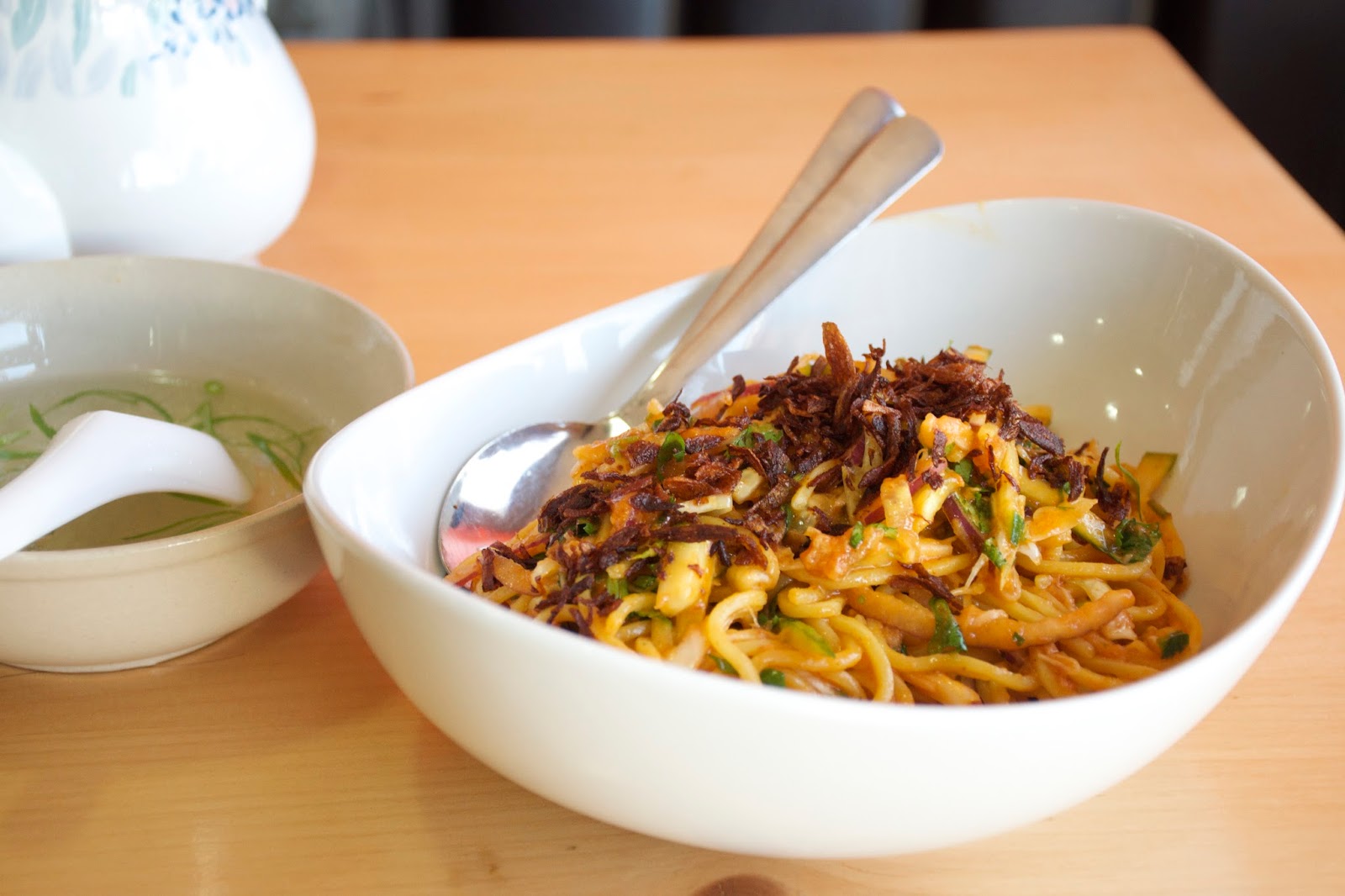 Noodle Salad
2.5/5 stars
This was actually really spicy! At first it doesn't taste spicy, but then the spiciness hits you in the back of the throat and leaves you thirsting for water! Once I got past the initial spiciness, the noodles exhibited a nice tanginess from the sauce, that was actually pretty enjoyable. The noodles were cooked al dente and didn't clump together. 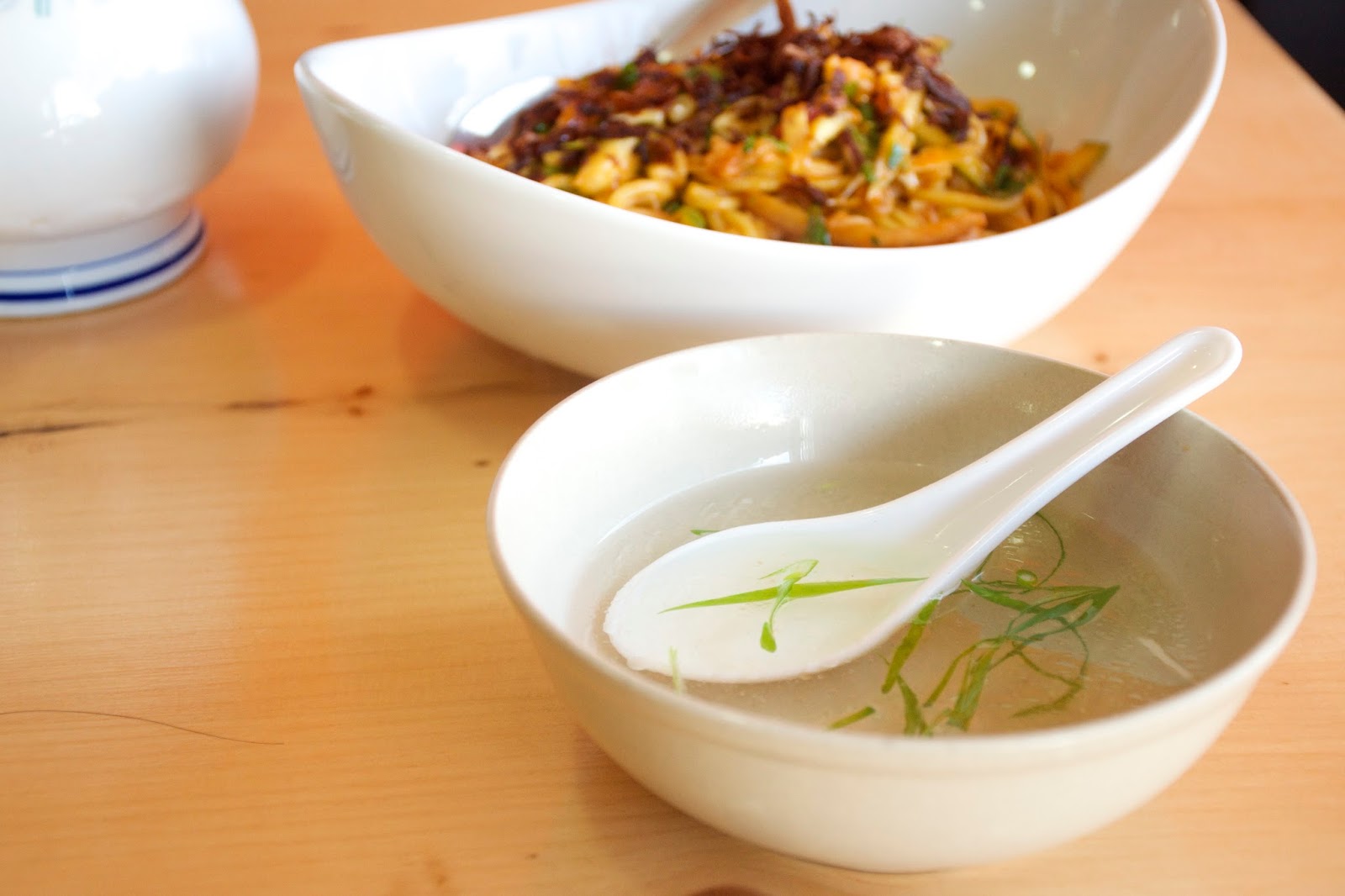 Soup
2/5 stars
The noodle salad was served with a side of clear soup, which had a subtle chicken flavour. It was a little oily on the top, but worked well as a palate cleanser from the spicy noodles lol. 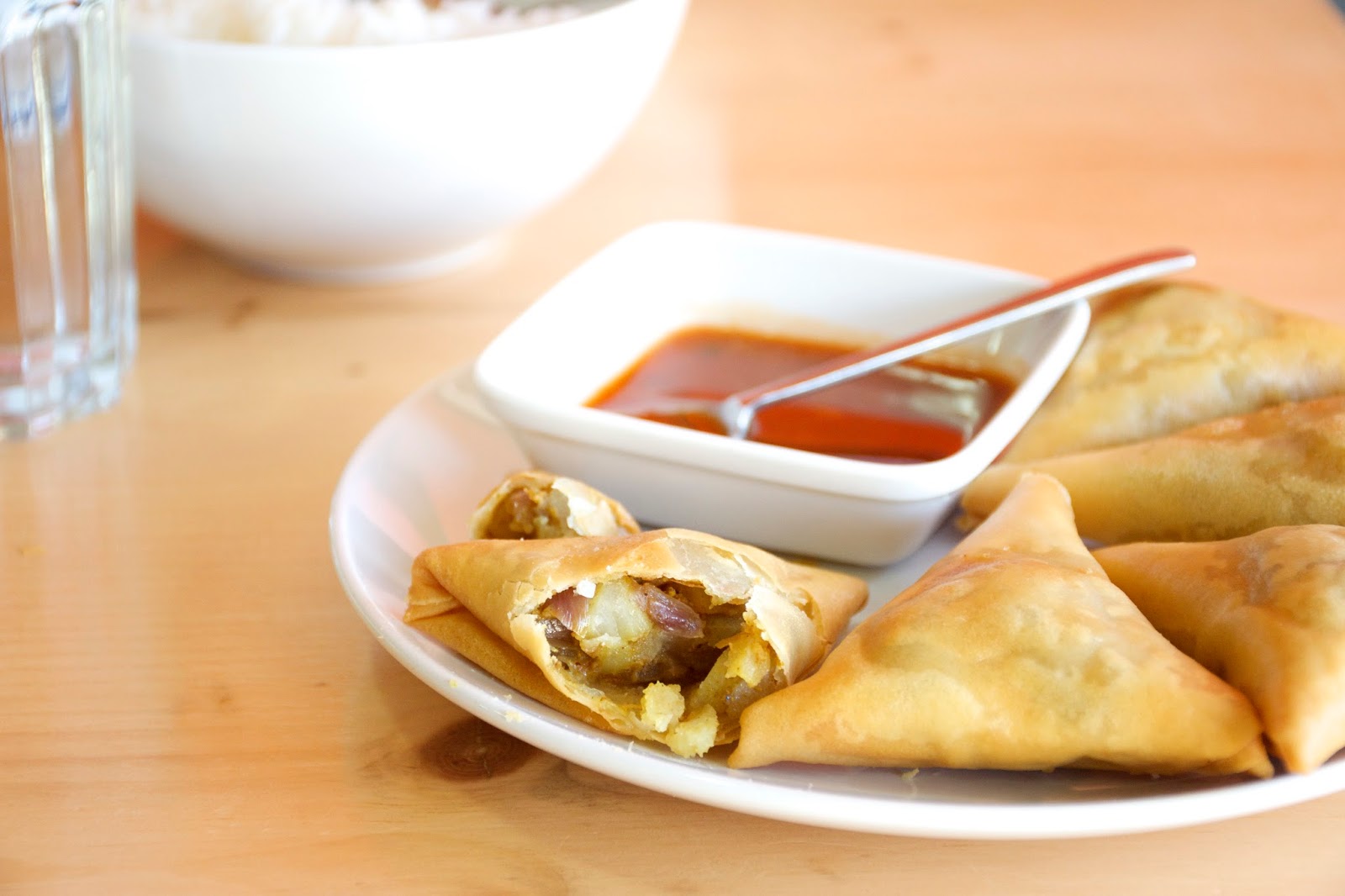 Burmese Style Samosas $5
3/5 stars
Served with a tamari based sauce, the samosas were crunchy, crispy, and fragrant, with a mushy, potato curry filling. The samosas itself wasn't greasy at all and was very well executed. The sauce was delightfully spicy without being too overbearing. 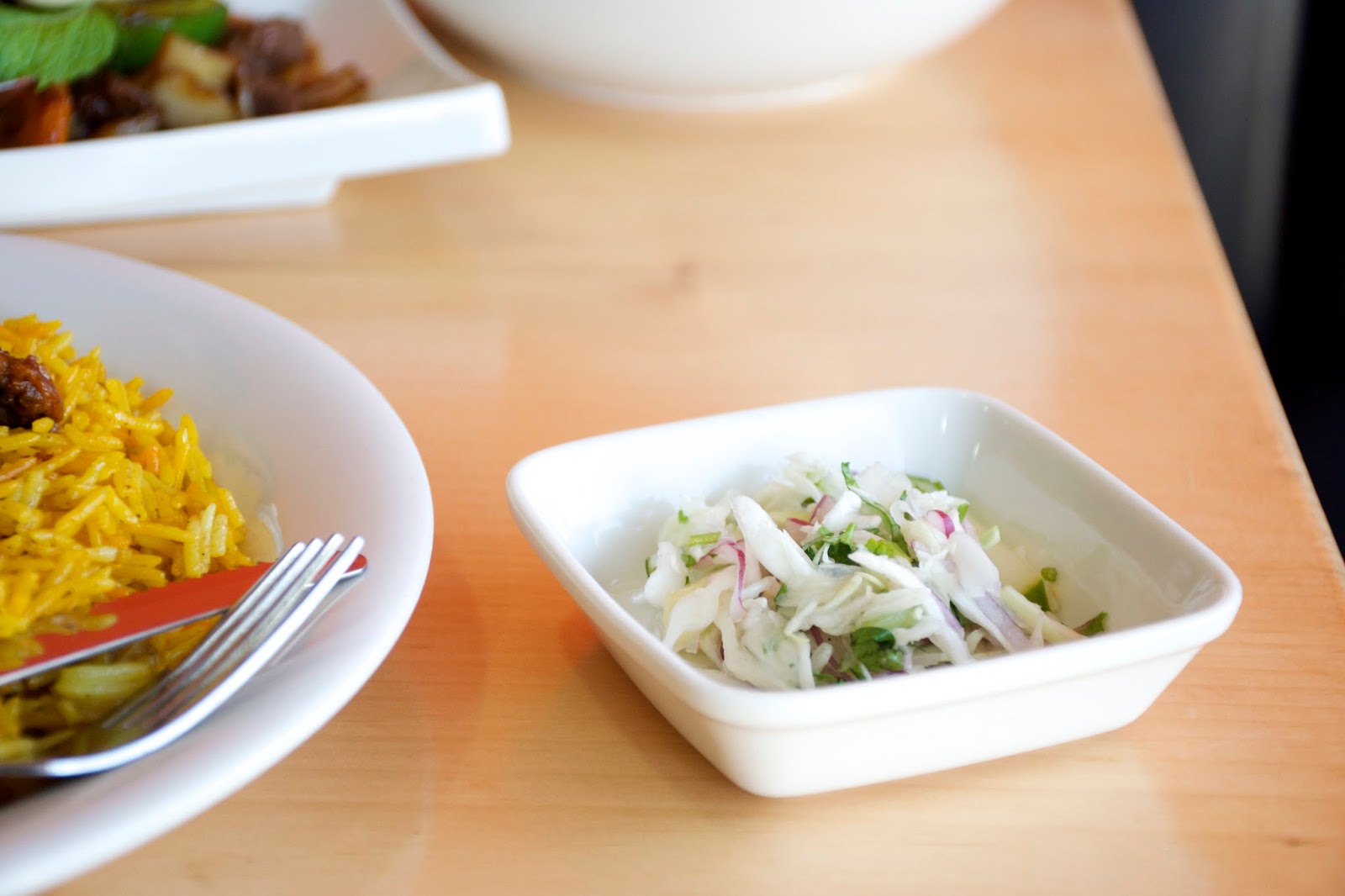 2/5 stars
We also got a mini salad, which is actually supposed to go in the noodles. The veggies were crispy, with a mild vinegary flavour. 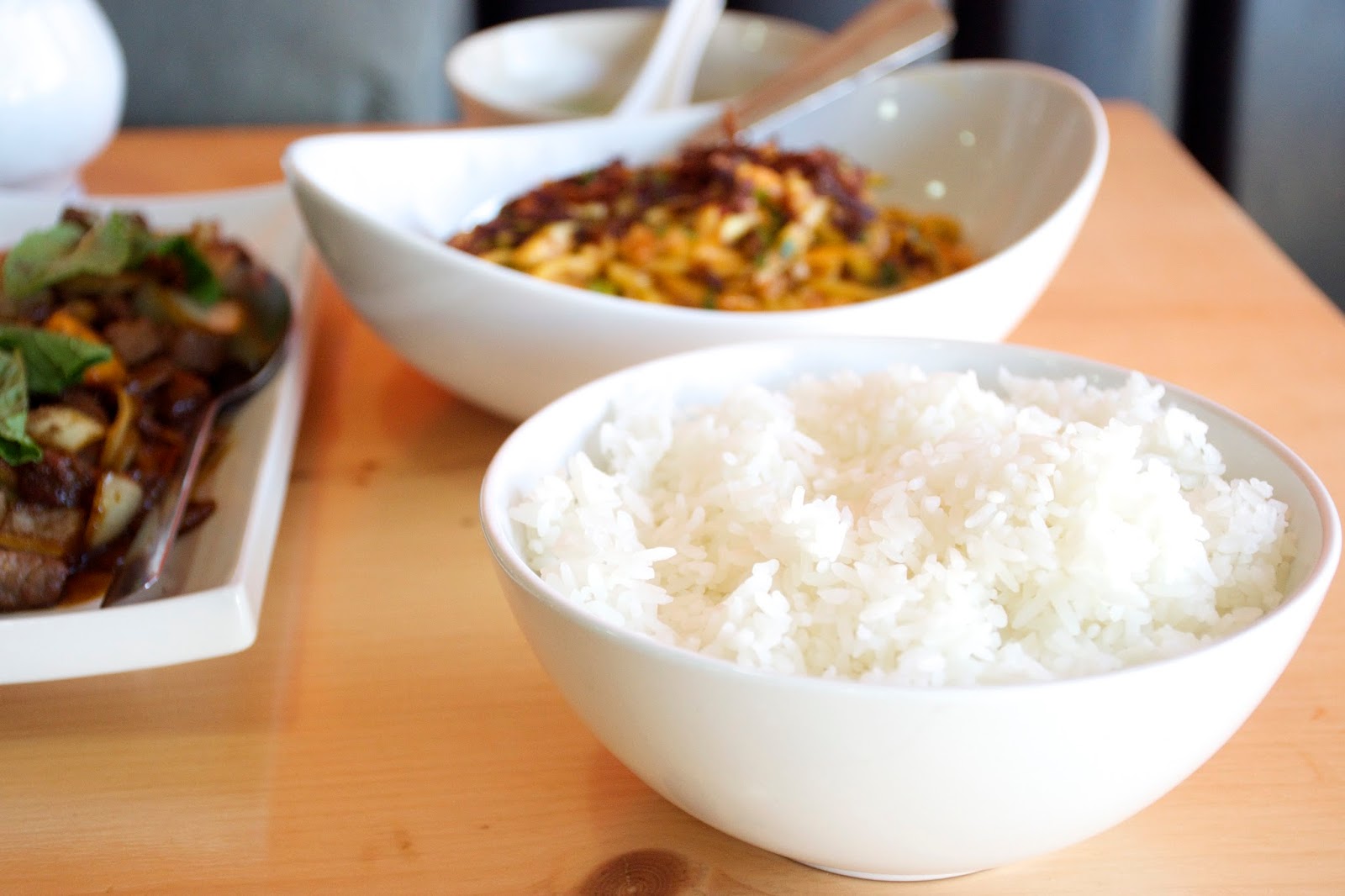 Andd what's a meal without some rice? :D