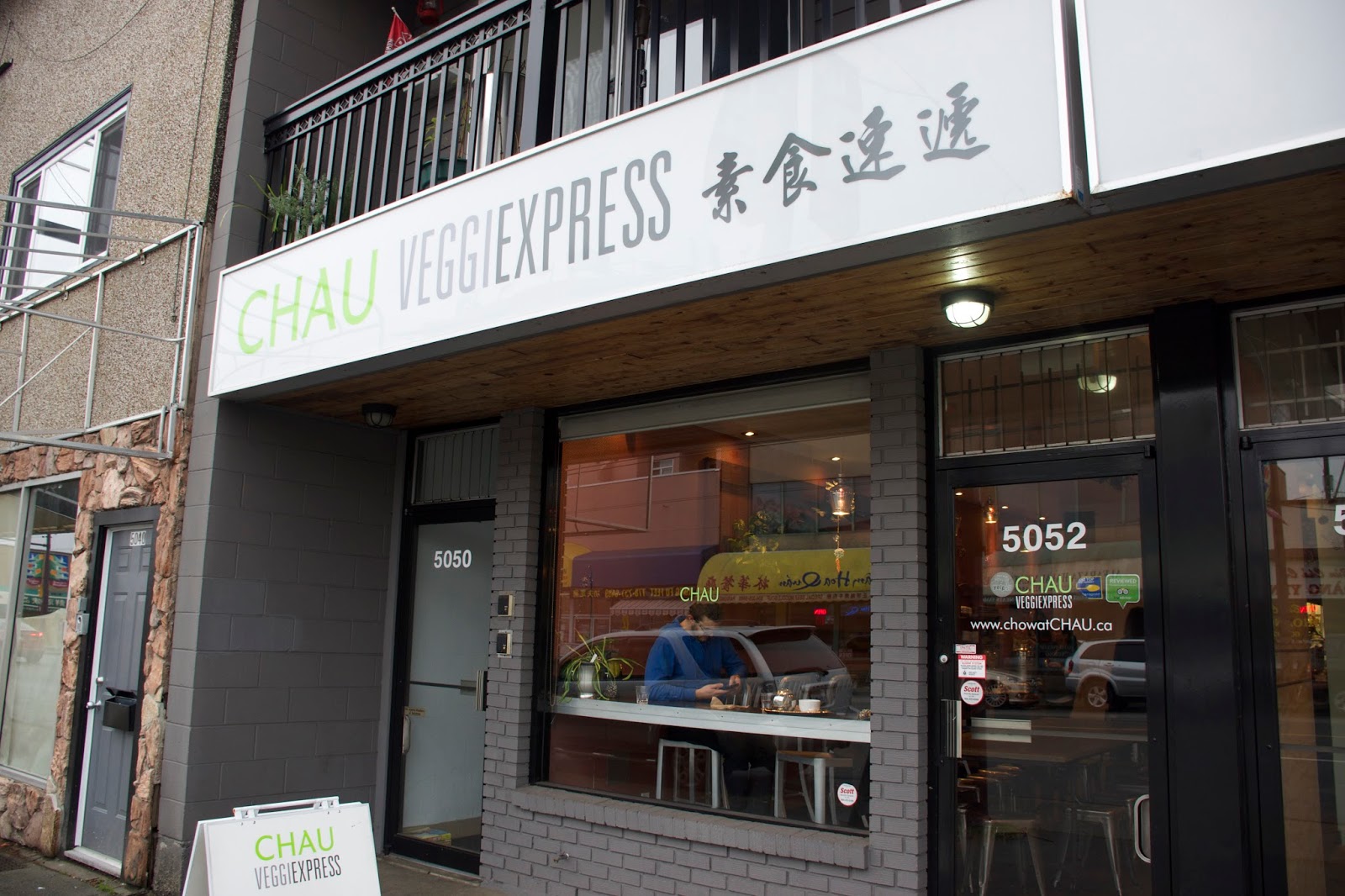 What do Vietnamese food, vegans, and hipsters all have in common?  Not much really LOL
...unless you're at Chau Veggiexpress! When you first walk in, you're greeted with reclaimed wood, industrial light fixtures, and a hipster kitchen crew. You're expecting quinoa. Or kale. Or something gluten free. (Don't get offended LOL, I'm only joking ;)
You take a look at the menu. There's pho. There's vermicelli.  There's spring rolls. What's going on here? You look again. There's no meat in the pho. None of your beloved rare beef! Instead, the broth is made out of lychee/ dates. Hmm, sounds interesting, so you order it. Then you spot taro chips. That's new...then you realize they also have vegan icecream, with exotic flavours like rose and Thai iced tea. The food finally arrives, in huge bowls, covered in a mountain of kale. My waistline will thank me, you think.

Sidenote: I'm testing out a new writing style! I think it'll be pretty fun and it'll give you guys a different perspective on my dining experiences at restaurants! :D I came up with this idea at 7:30 in the morning when I was lying in bed half awake LOL...

Another Sidenote: this was my last meal with my grandma...until she comes back from Taiwan in march *sadface* no more weekly epic feasts! :( 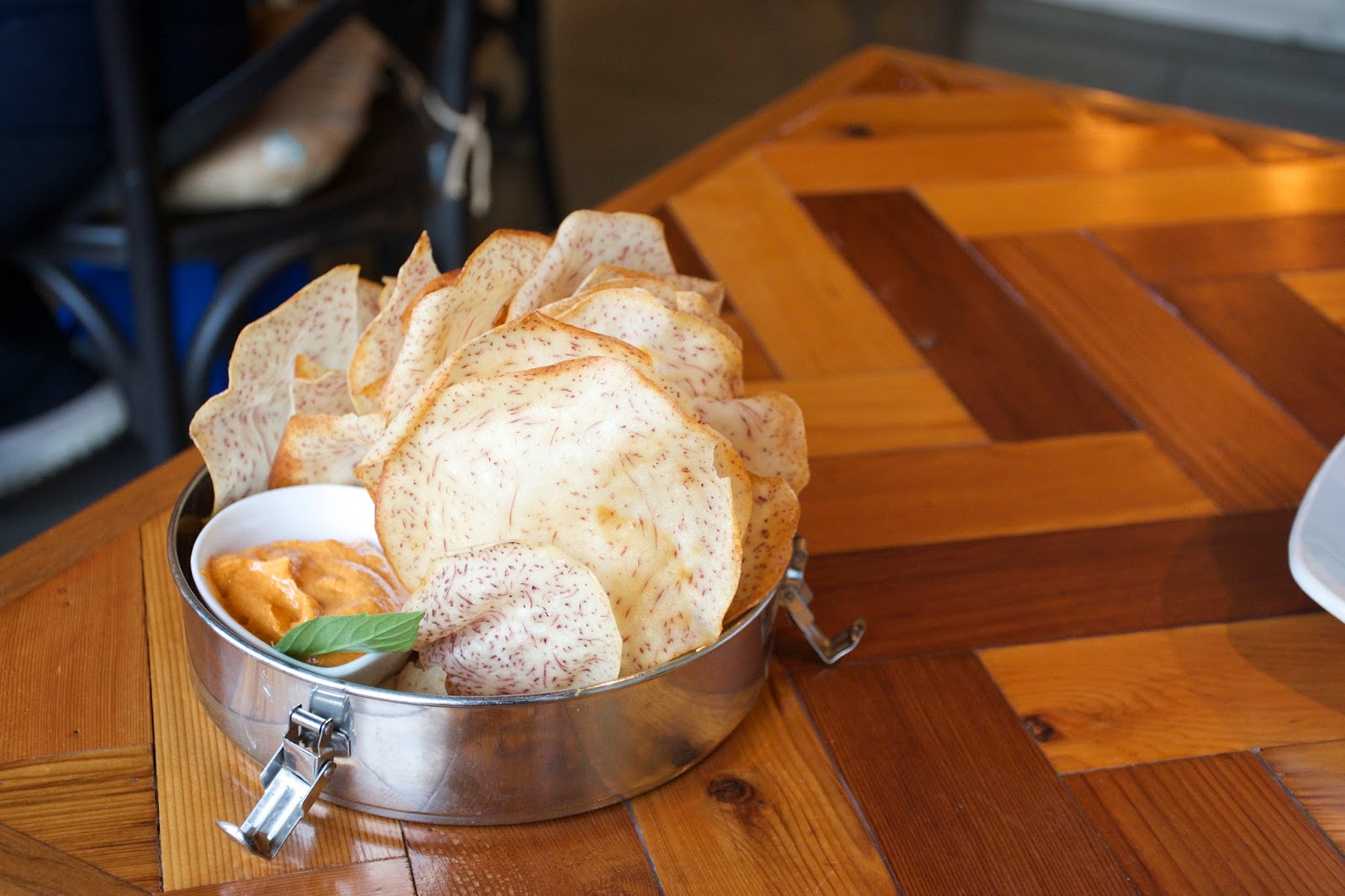 Taro Chips $6.50
4/5 stars
asdfsdf...taro, in chip form?!! This was so awesome!! Don't you just love the presentation? The chips tasted as good as they looked, they were super crunchy, airy, and full of taro flavour! It also came with a spicy siracha/chipotle dip on the side! 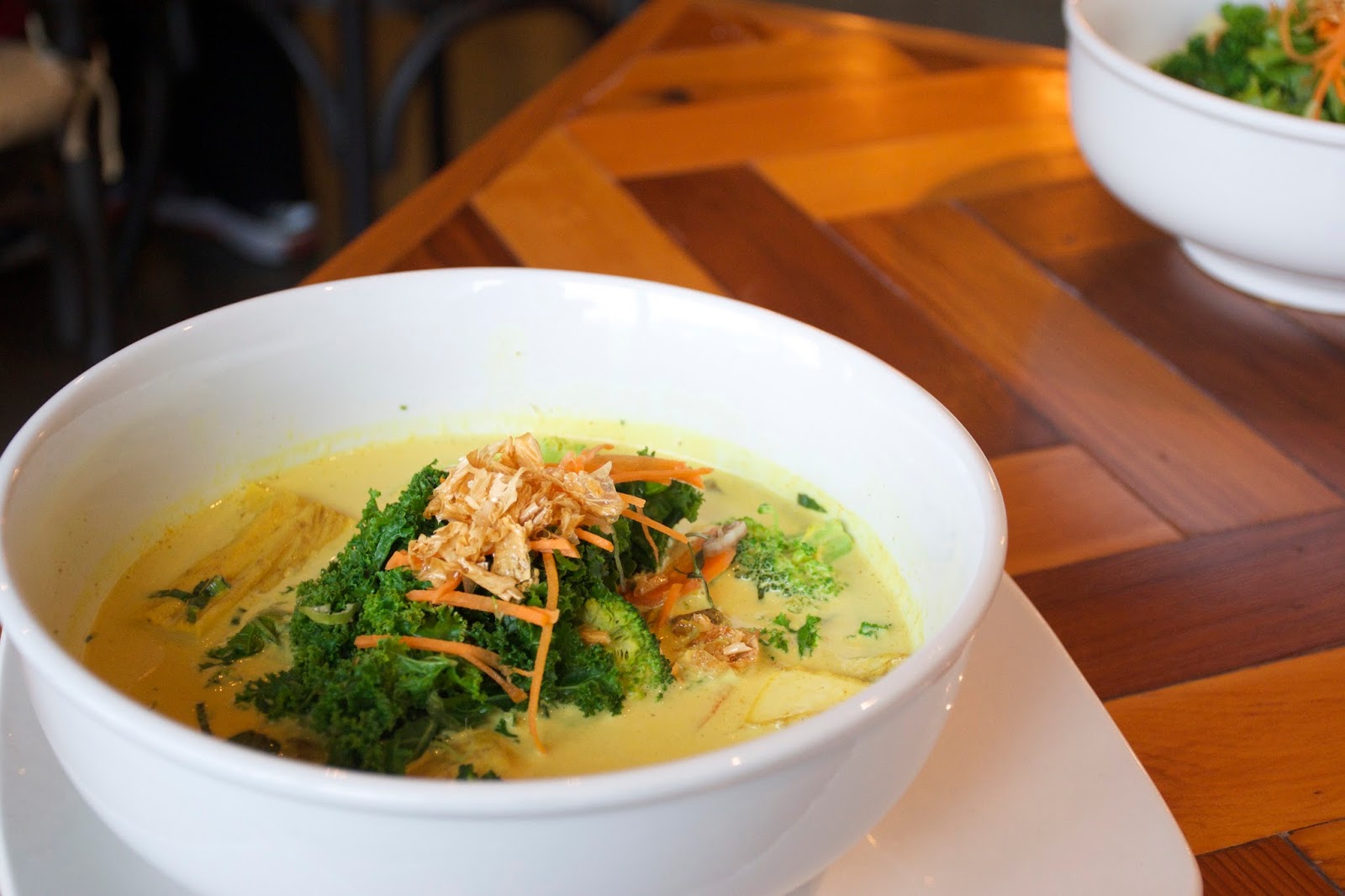 3/5 stars
This was delicious as well! The broth was really thick and hearty, full of coconut-ny flavour with a dash of tumeric! It was loaded with kale, broccoli, califlower, tofu pockets and shredded carrots! Doesn't look like a lot, but the bowl was huge and really filling! It also came with a side of quinoa! 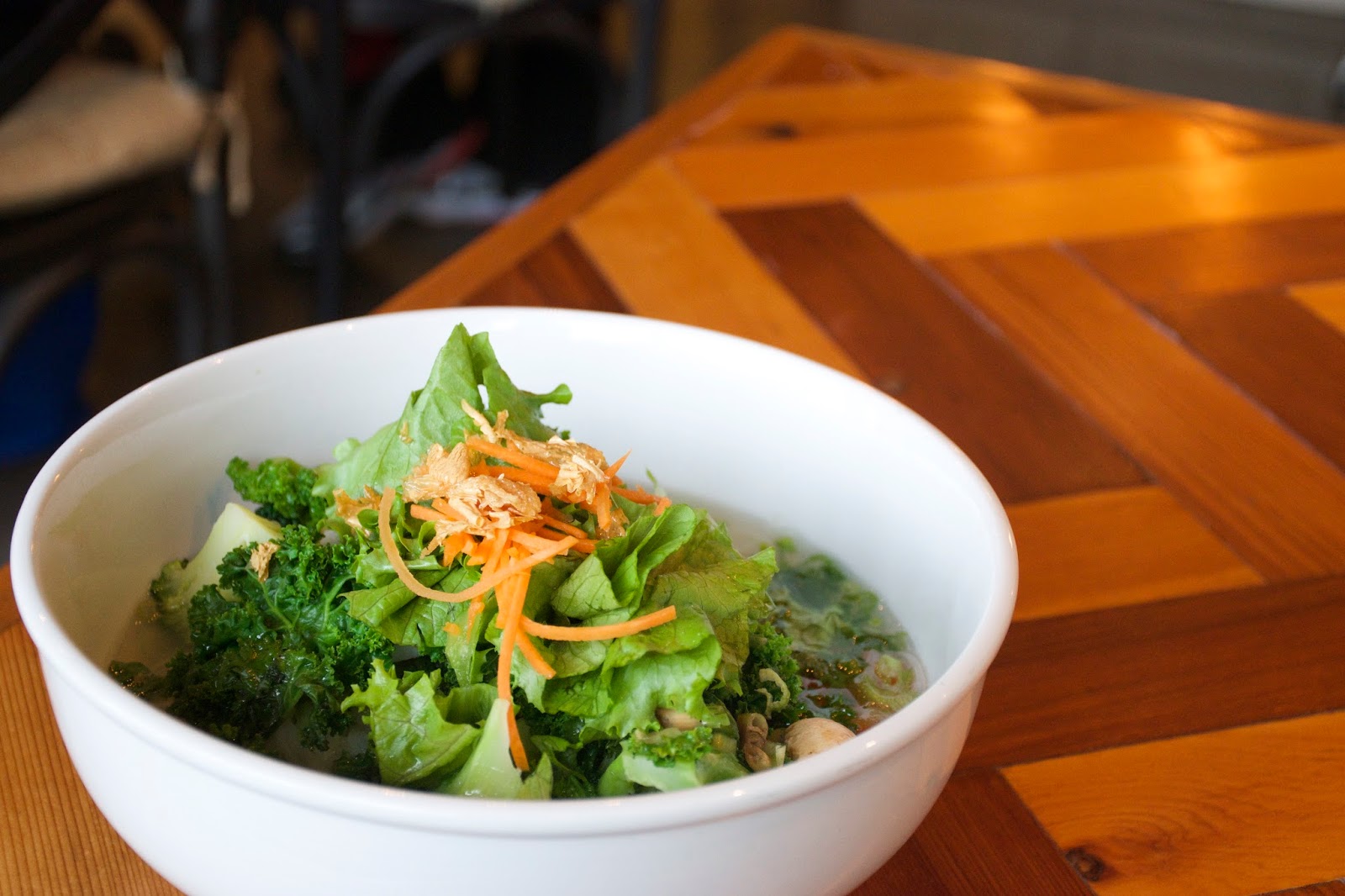 Diving For Pearls Pho $10.25
4/5 stars
Meatless pho? I never thought food sans meat would taste so good LOL! The broth is made out of a lychee date base, so it's sweet-savoury! The lychee adds a tartness and the date lightly sweetens the broth! There was a ton of al dente pho noodles which soaked up all of the flavours of the broth. This one also had a ton of kale, broccoli, tofu pockets, and mushrooms in it too! 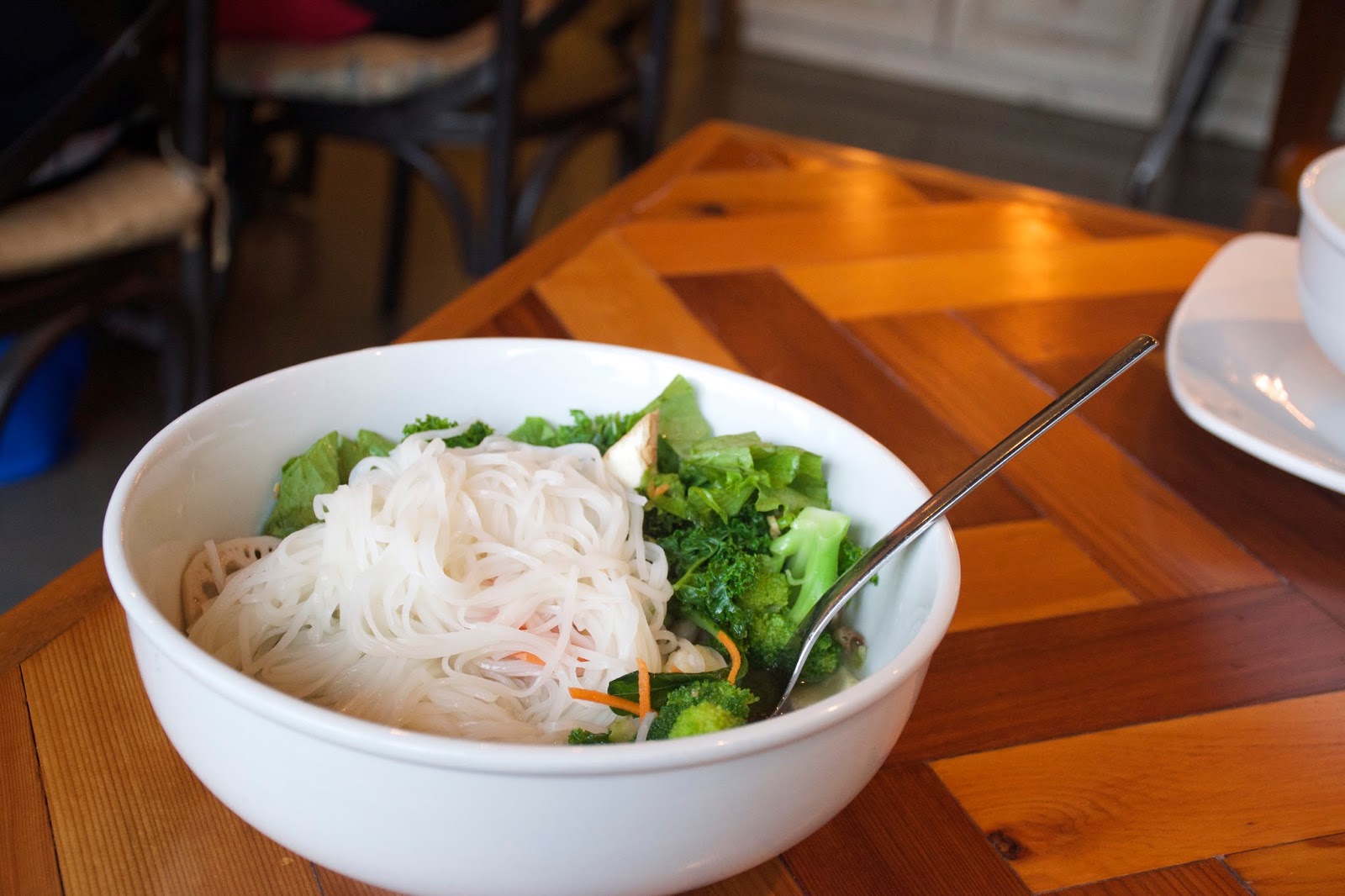 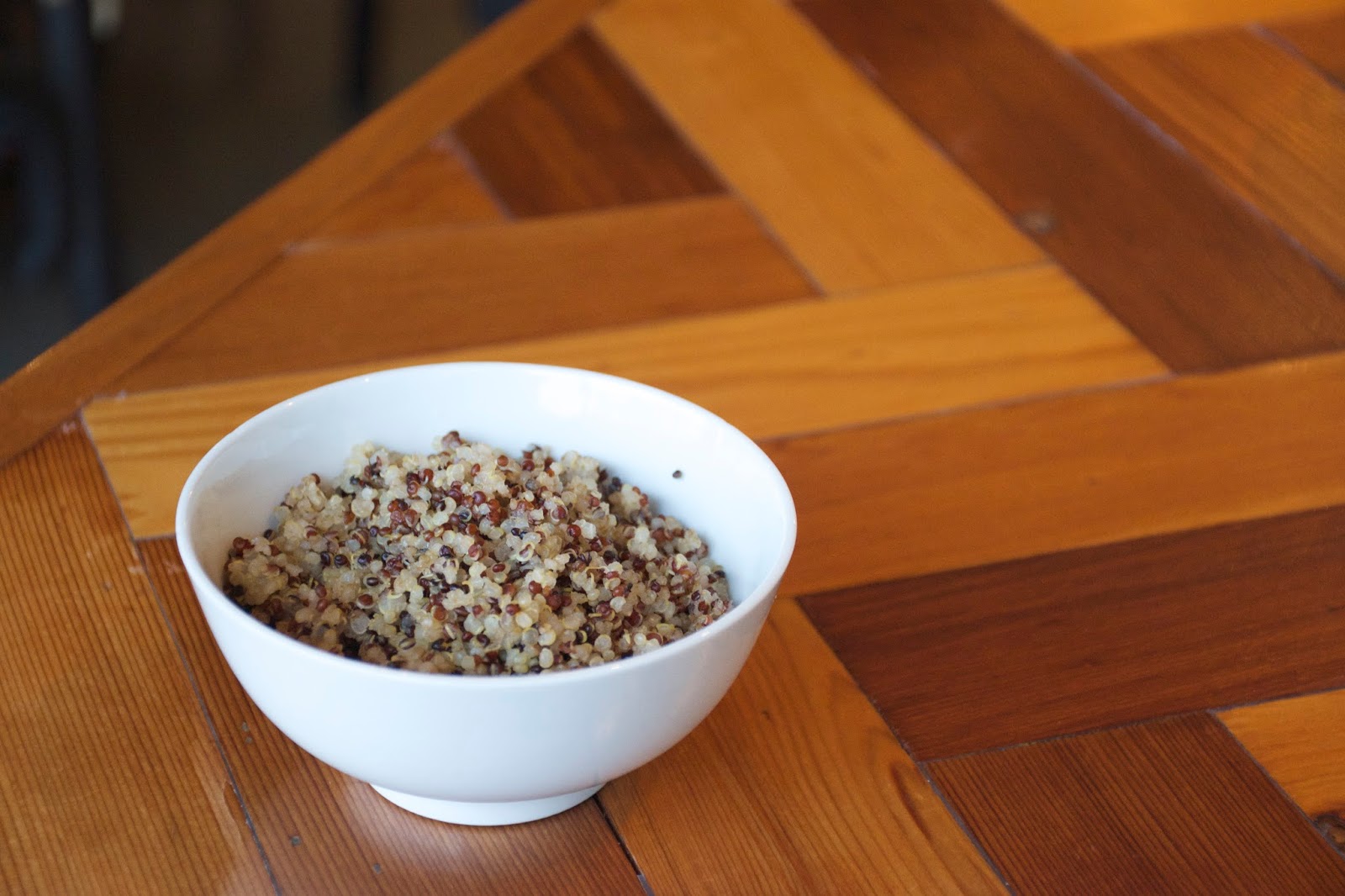 The curry also came with a bowl of quinoa! 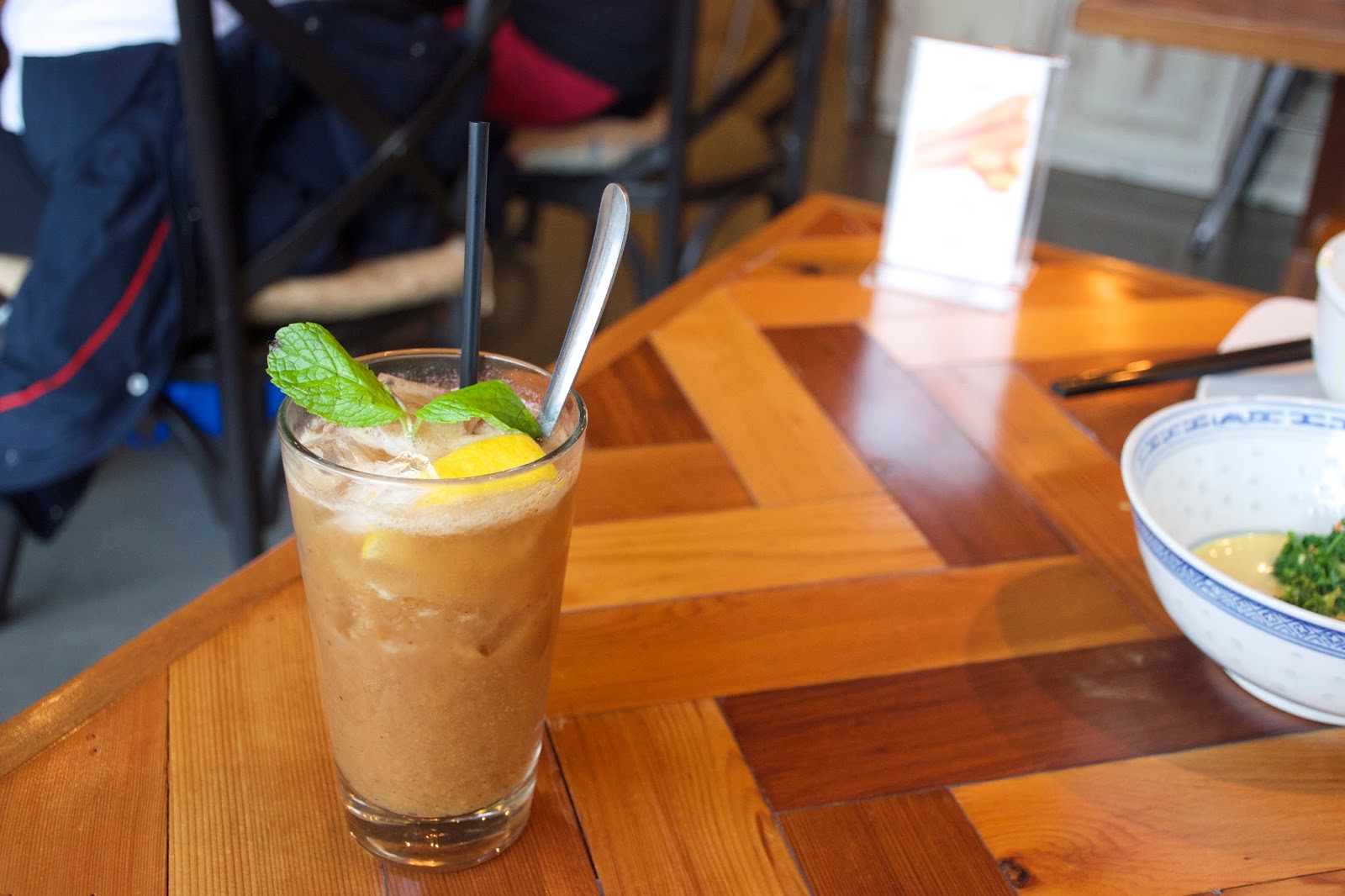 Taramind Soda
3/5 stars
The taramind spiced soda tasted exactly like taramind! It was actually really sour, but I liked how it wasn't sweetened! Super tasty and a great way to end a meal! 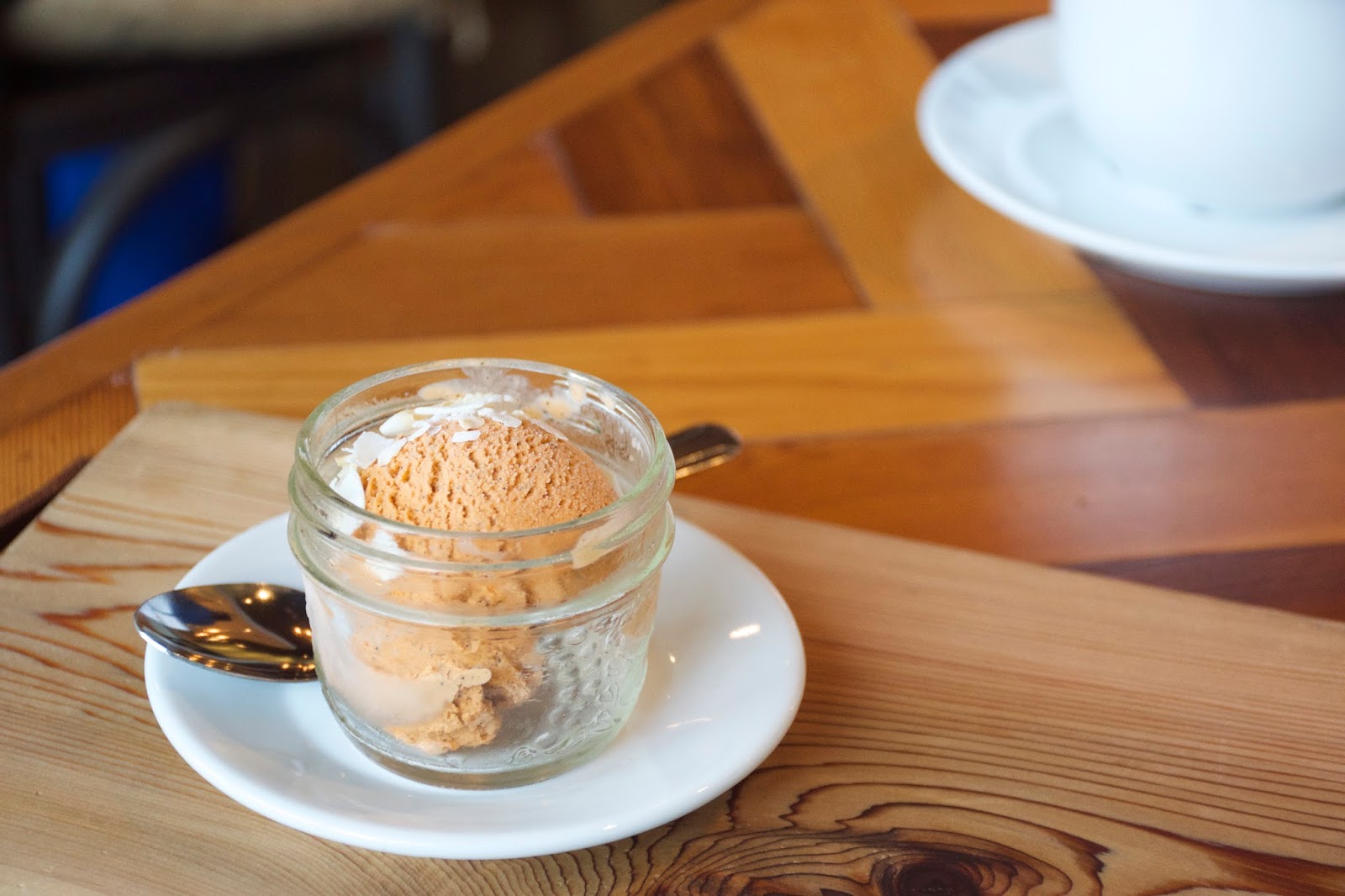 Thai Iced Tea Vegan Icecream
3/5 stars
Thai Iced Tea...in icecream form? Andd it's vegan?! Get out! Obviously I had to try this! It did taste like thai tea, with a strong ceylon flavour. The ice cream was really smooth and decorated with coconut flakes on top! 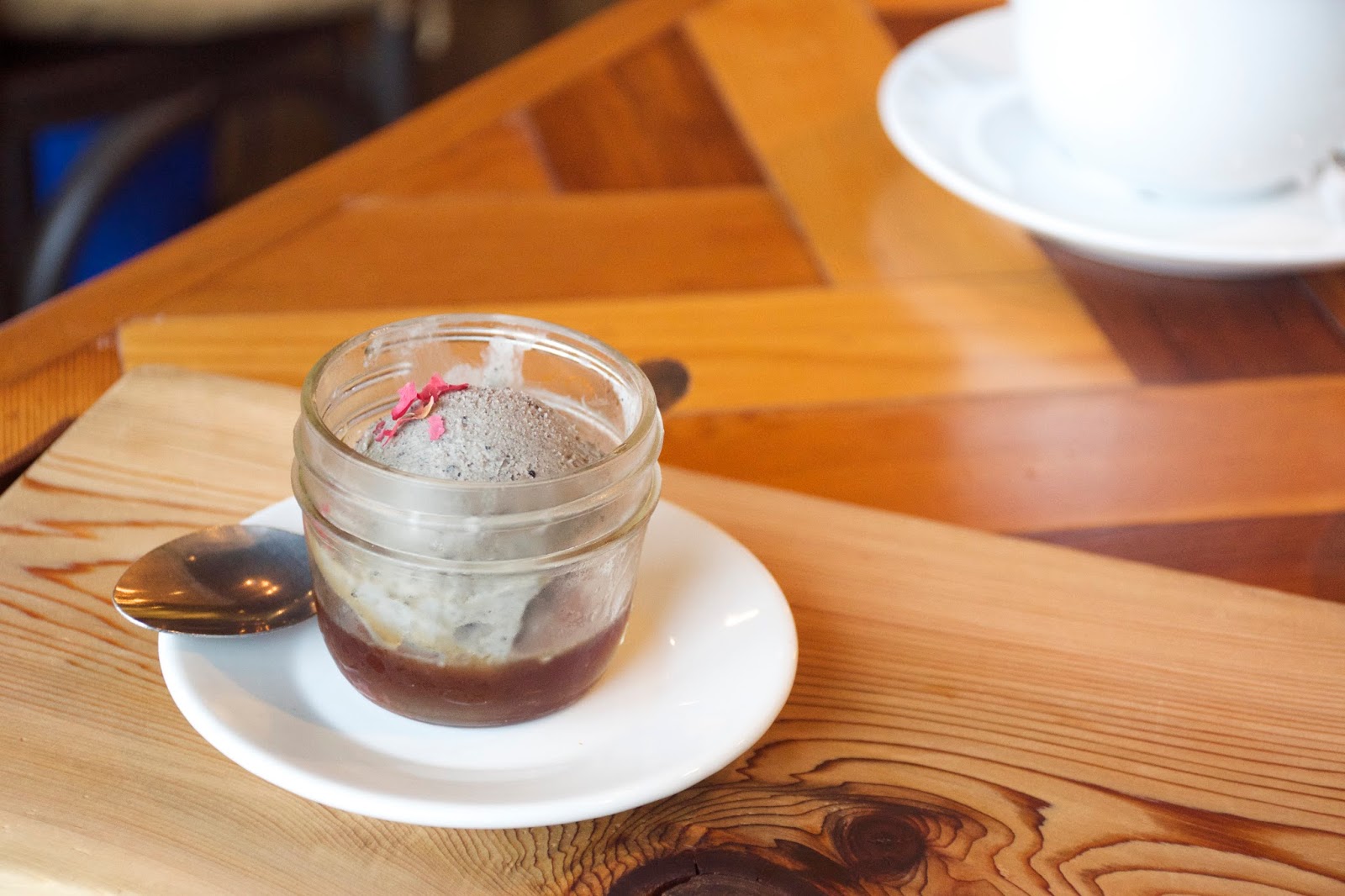 Sesame w/ Rose Syrup Vegan Icecream
3.5/5 stars
I couldn't resist getting another icecream hehe...this was one awesome as well! The rose syrup really tasted like rose petals, and it smelled heavenly too! The sesame was strong, and the ice cream was super creamy! 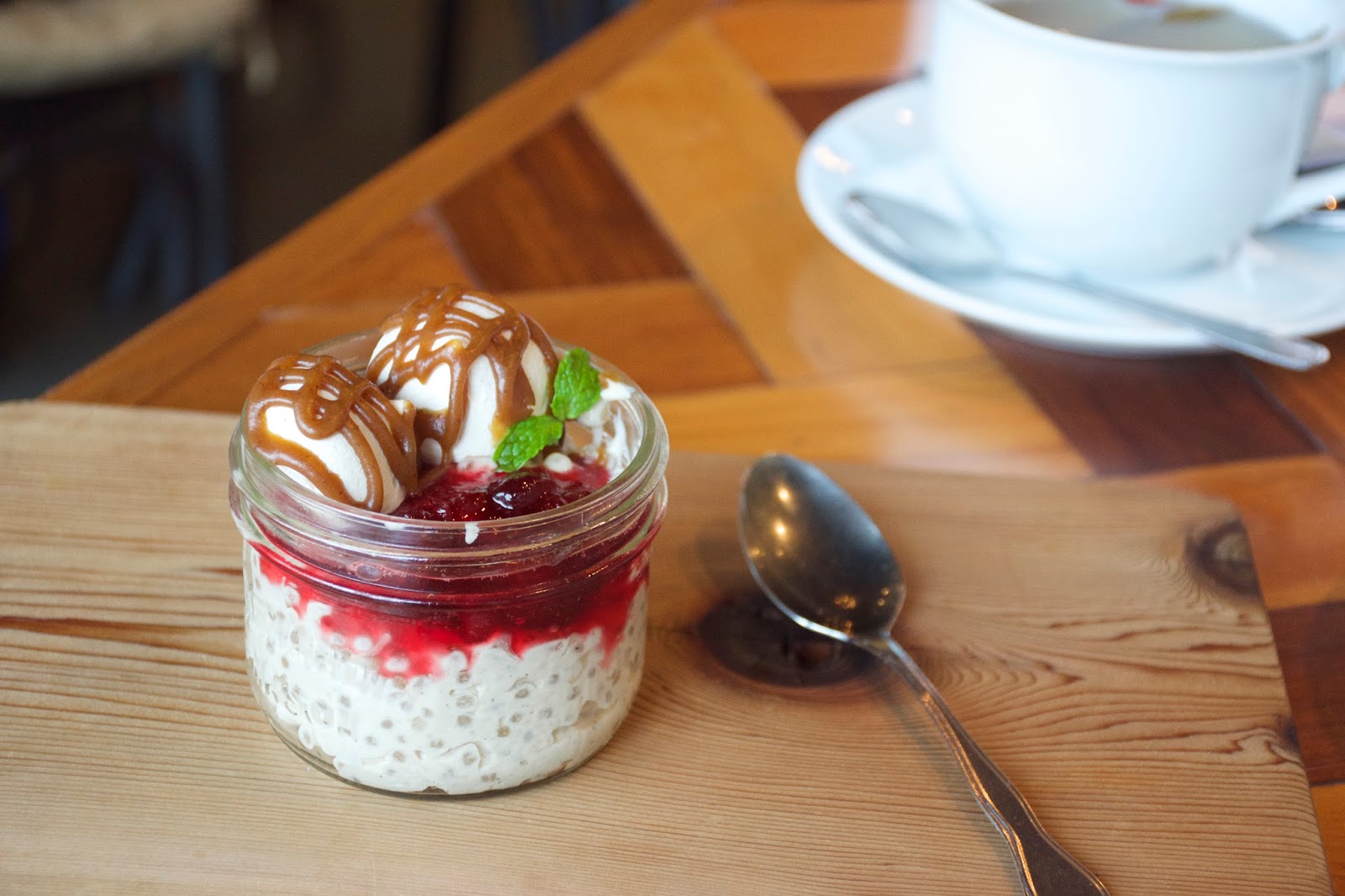 Ginger Spiced Tapioca Pudding with Cranberries, Cardamon Spiced Pavloca, Coconut Meat and ginger spiced caramel $5
3/5 stars
This is one of their holiday features! I loved how they added small tapioca pearls, because I love my pearls LOL! The cranberry sauce added a nice tartness, and the pudding itself wasn't overly sweet. The cookie bits on top were soft and crumbly, and the cardamon added an extra punch of flavour! 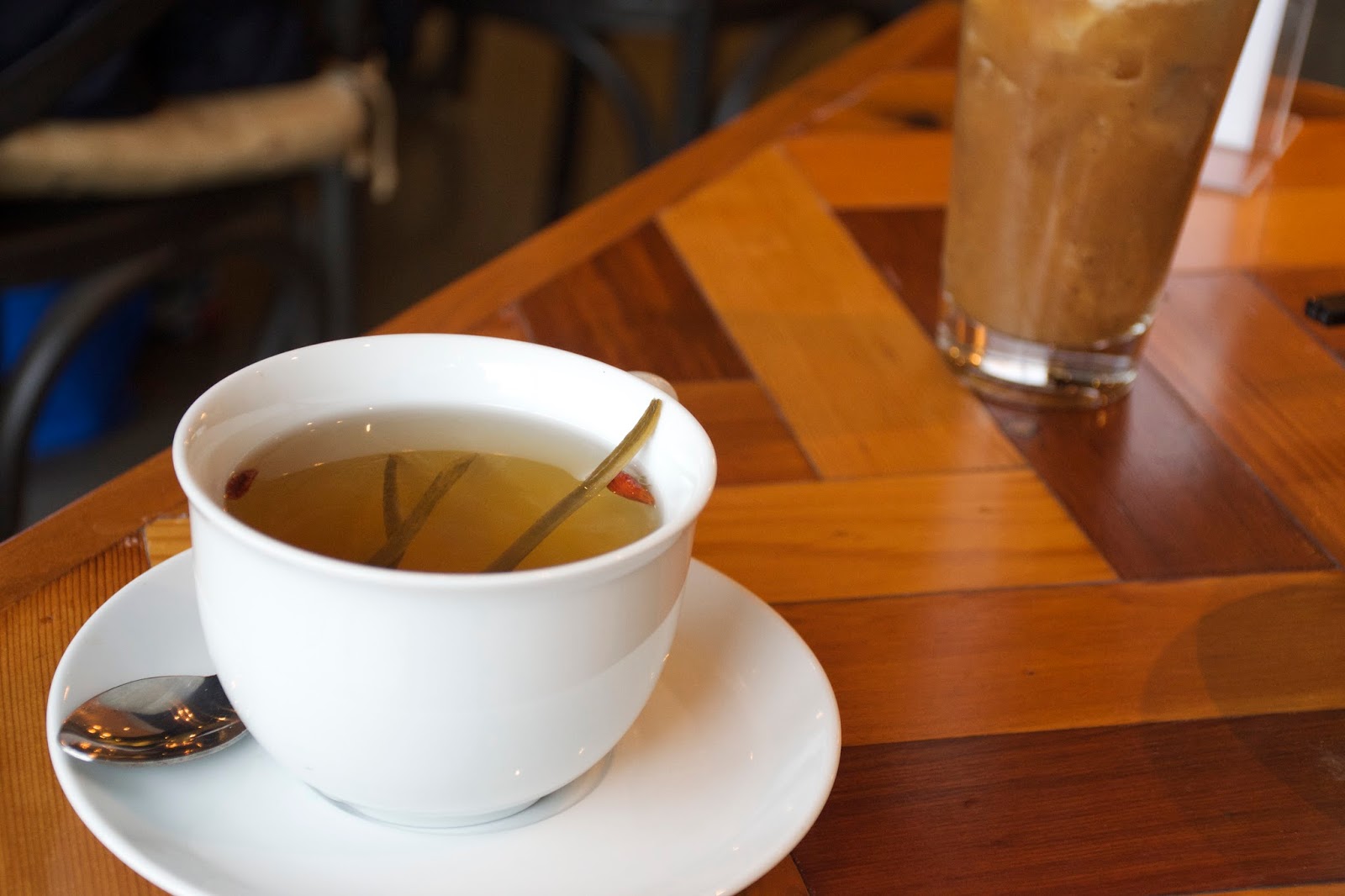 Artichoke & Goji Berry Tea
3.5/5 stars
This was super refreshing! It was actually pretty sweet, but the goji favour was really strong! I couldn't really pick up any artichoke in it though LOL!