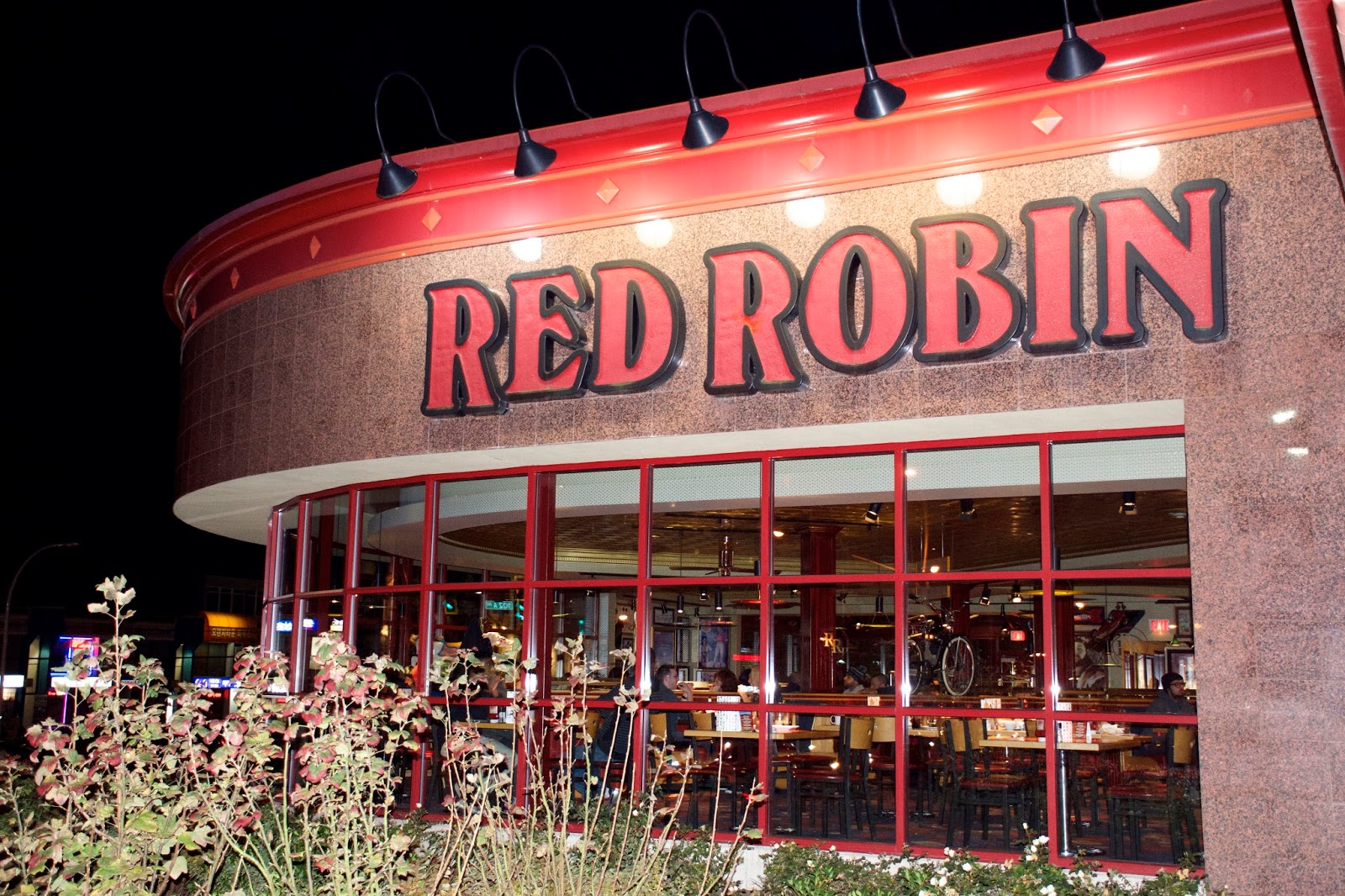 After driving around for half an hour looking for somewhere to eat, my dad and I finally settled on Red Robin's LOL. I was surprised my dad actually wanted to eat here, I warned him about the burgers being $10-$15! He's so use to paying under $5 for a burger at Burger King I didn't think he could justify paying $10+ for a burger haha but I guess I was wrong!

My dad didn't want chinese food, so it was either this, Japanese, or Korean BBQ! We went to this tiny Korean place, but it was completely empty, and after skimming the menu my dad wanted to leave, and we left LOL! I felt so bad haha...good thing they didn't pour tea for us yet!

Anyways, I've never been to a Red Robin's. Ever LOL! I had a $3 off coupon on my phone but turns out you have to print out the coupon or else it's invalid haha, so I couldn't use it!  But I'll be back for my free birthday burger!! I actually signed my entire family up hehe, so we can get free burgers all year round, cause who doesn't like free burgers?! ;) 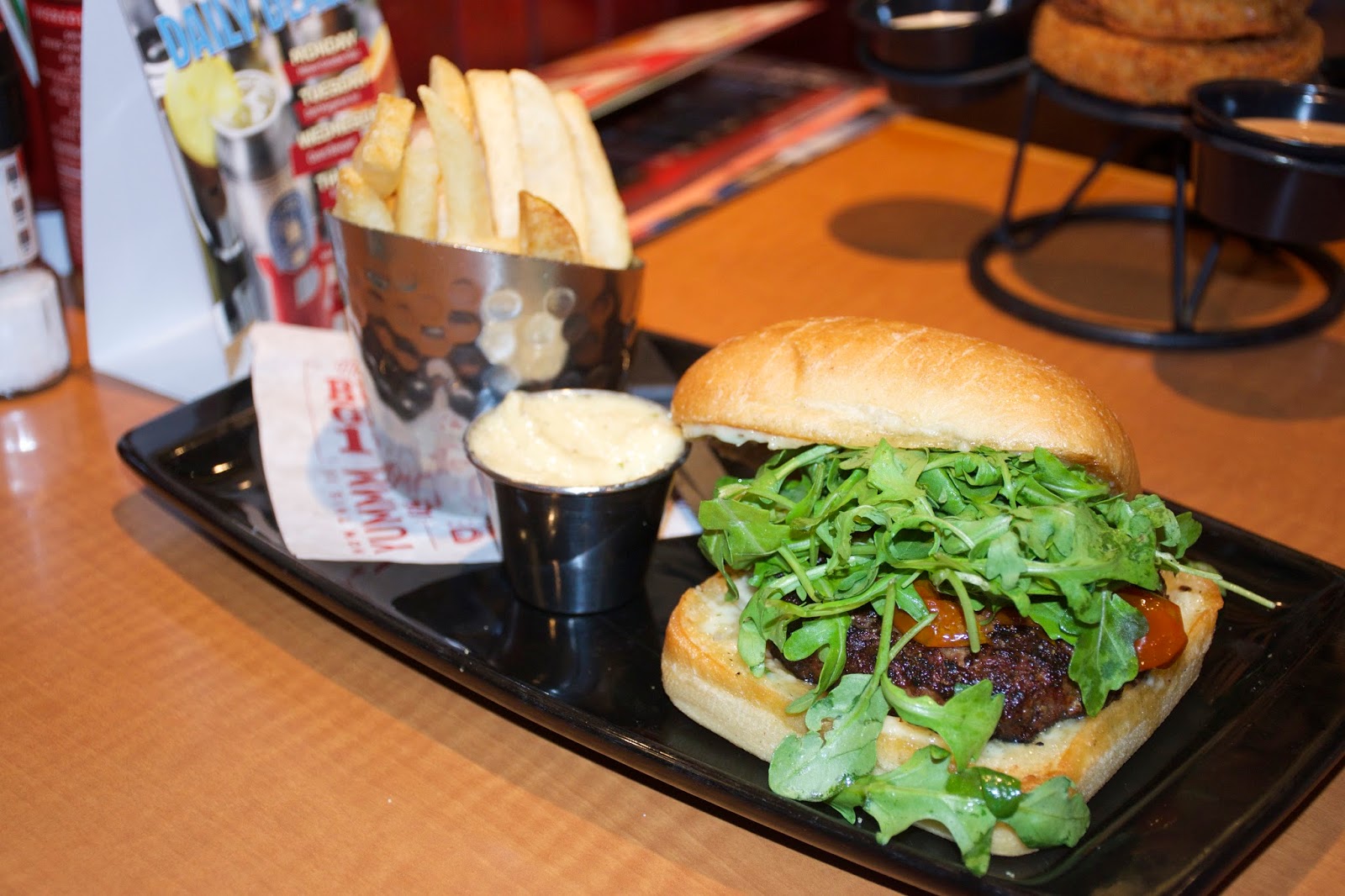 The DGB $15
3/5 stars
This was actually pretty good! I was pleased that the actual burger looked the same as the picture on the menu LOL! The DGB has oven roasted tomatoes, roasted garlic aioli, argula tossed in citrus olive oil dressing on a toasted ciabetta bun.

The toasted cibatetta bun was soft and not too dense, and crunchy on the edges. The fresh argula did taste citrusy, and it made me feel less guilty about eating a burger LOL! The patty itself was alright, it was charred and had a smokey taste to it, but it was dry! The burger also came with an extra side of the garlic aioli! The aioli was creamy and thick, with a heavy garlicky profile! 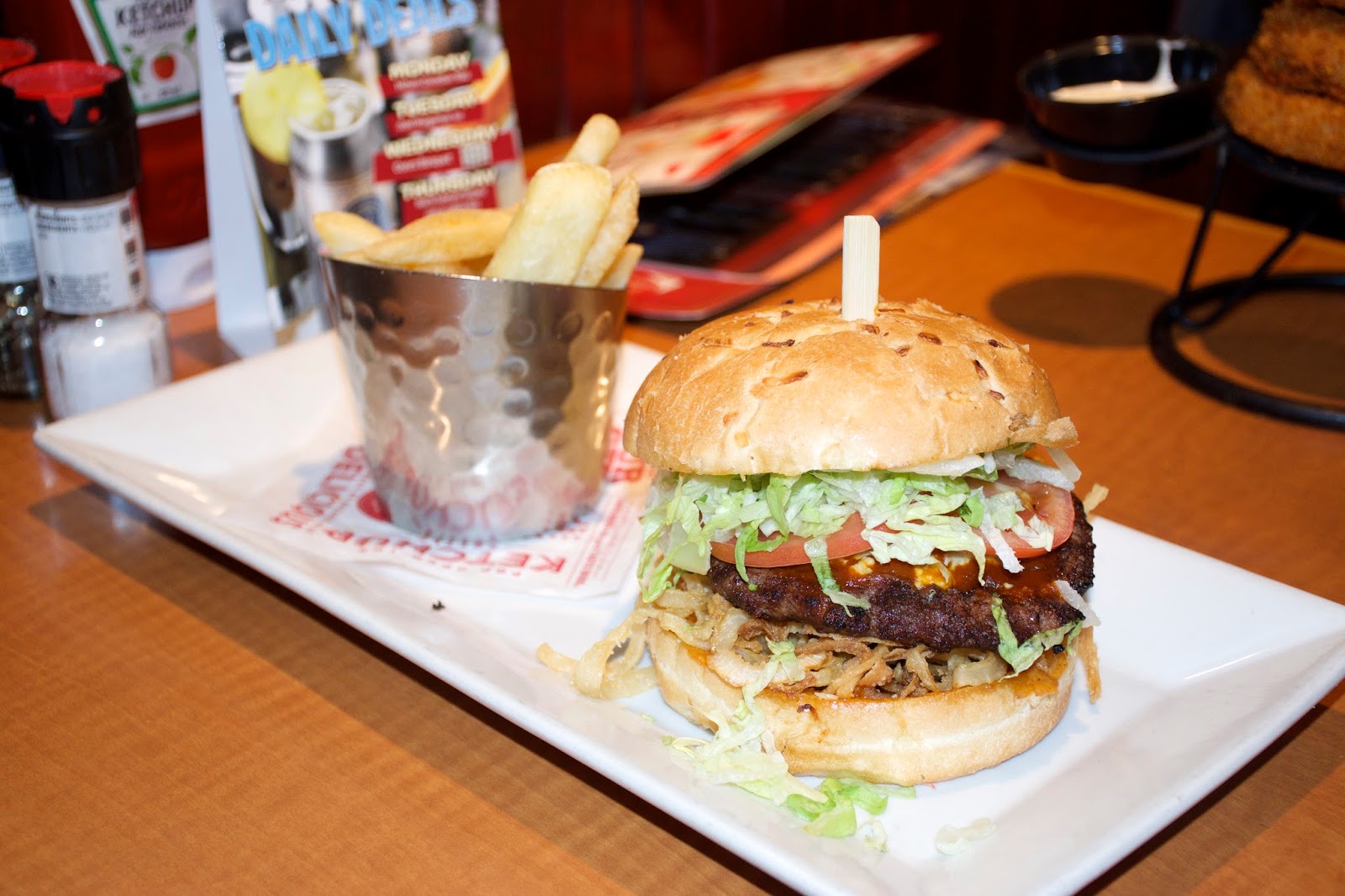 The Blue Ribbon Burger $11.95
2/5 stars
My dad had the Blue Ribbon burger, which has crumbled blue cheese, chipotle sauce aioli,tangy steak sauce, and crispy onion straws in it! This burger was alot larger than mine haha, you can tell because they had to put a stick in it to keep it from falling over! He remarked that the blue cheese flavour was indeed potent, but he didn't like how the burger lef a bitter aftertaste. 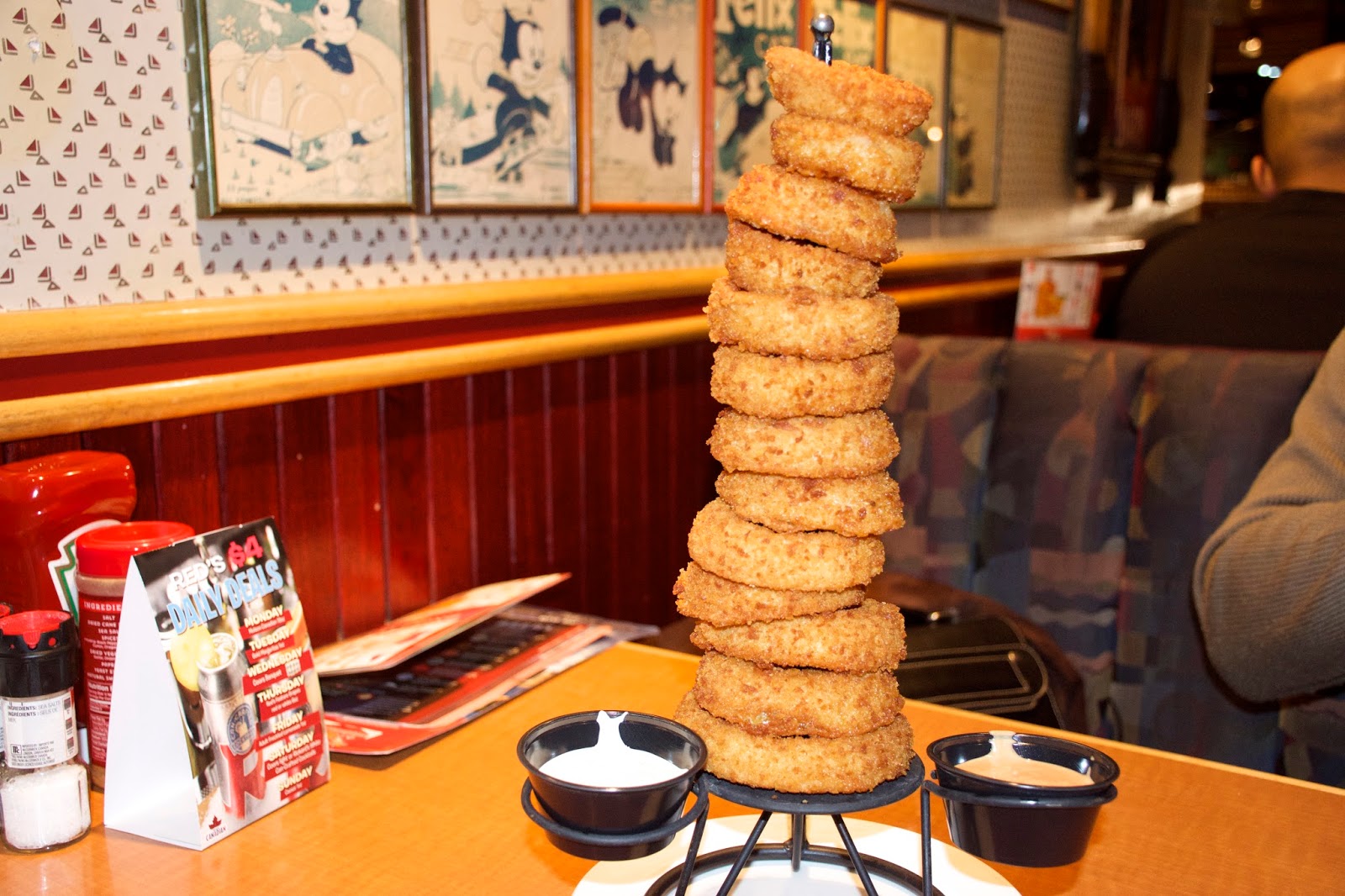 Onion Ring Tower $10
2.5/5 stars
I've seen pictures of this on instagram LOL, so of course I had to order it! I really like how they stack the onion rings into a tower, it adds to the novelty haha! The onion rings themselves were decent, crunchy, not oily, and lightly breaded on the outside! The tower also came with two sides of dip, conveniently placed in two dip holders. 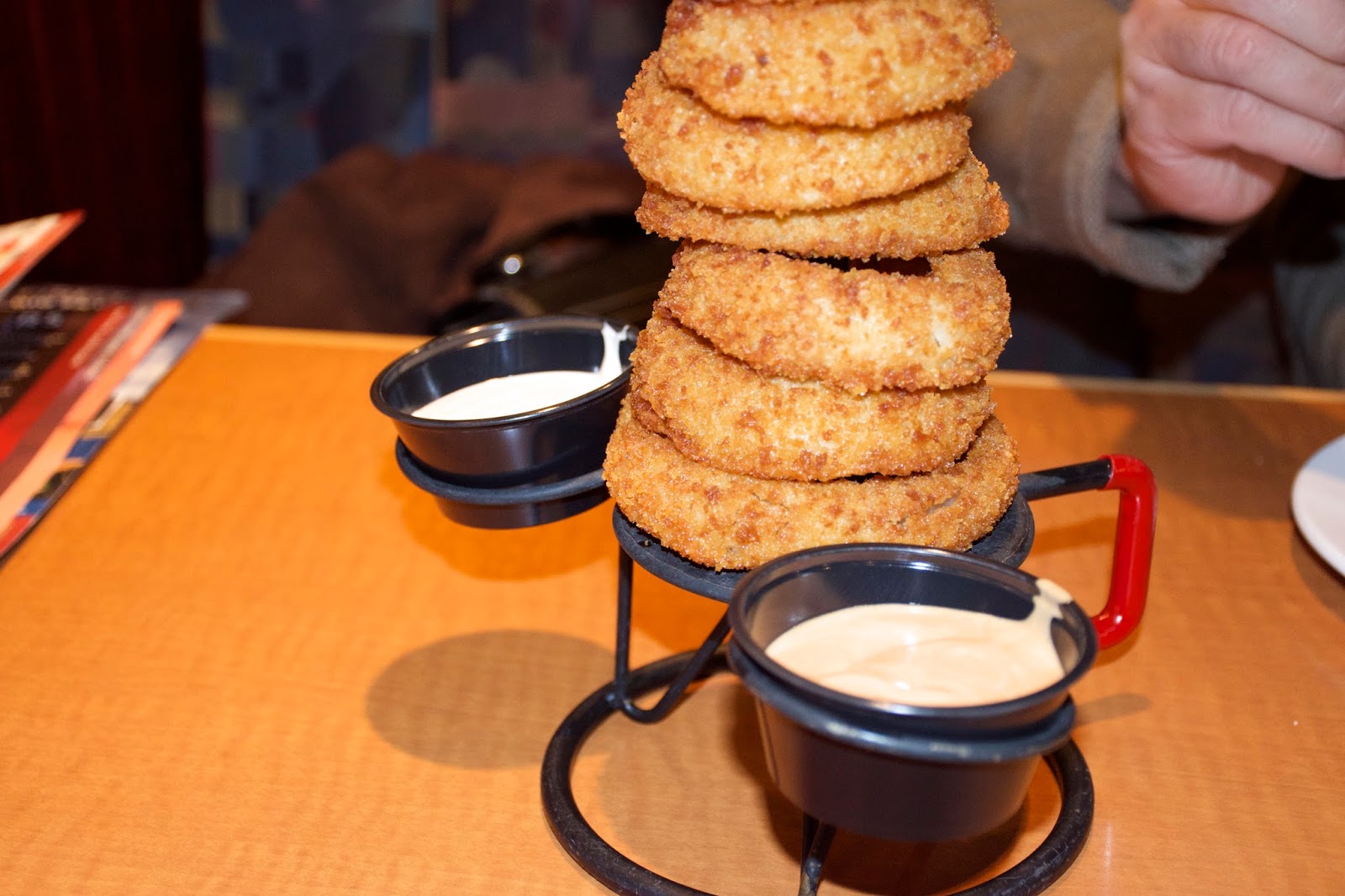 Chipotle Mayo and Sour Cream
1.5/5 stars
The dips were okay, I prefer their signature Red Robin shake they have on every table! The chipotle mayo was standard, but the sour cream tasted really watered down and wasn't tangy enough. 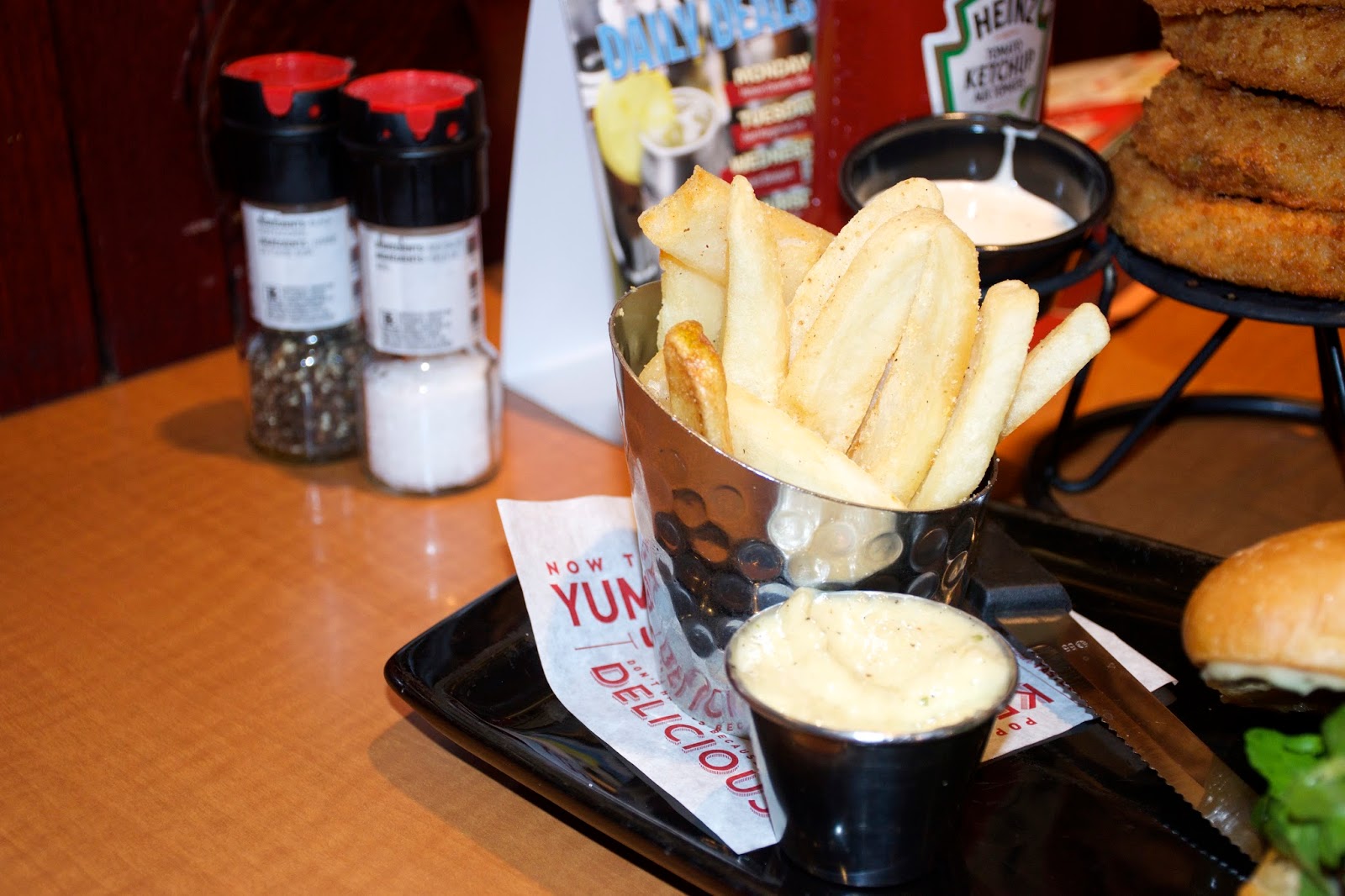 Bottomless "Steak" Fries
3/5 stars
The fries at Red Robin's are all bottomless and dusted with their signature blend of spices which they have on every table! The fries were massive, thick cut, and full of potatotey flavour lol. I didn't end up finishing my fries because I was too busy working on my burger lol! Since the pieces were so thick the fries were really filling haha. I wouldn't imagine ordering a second round lol! 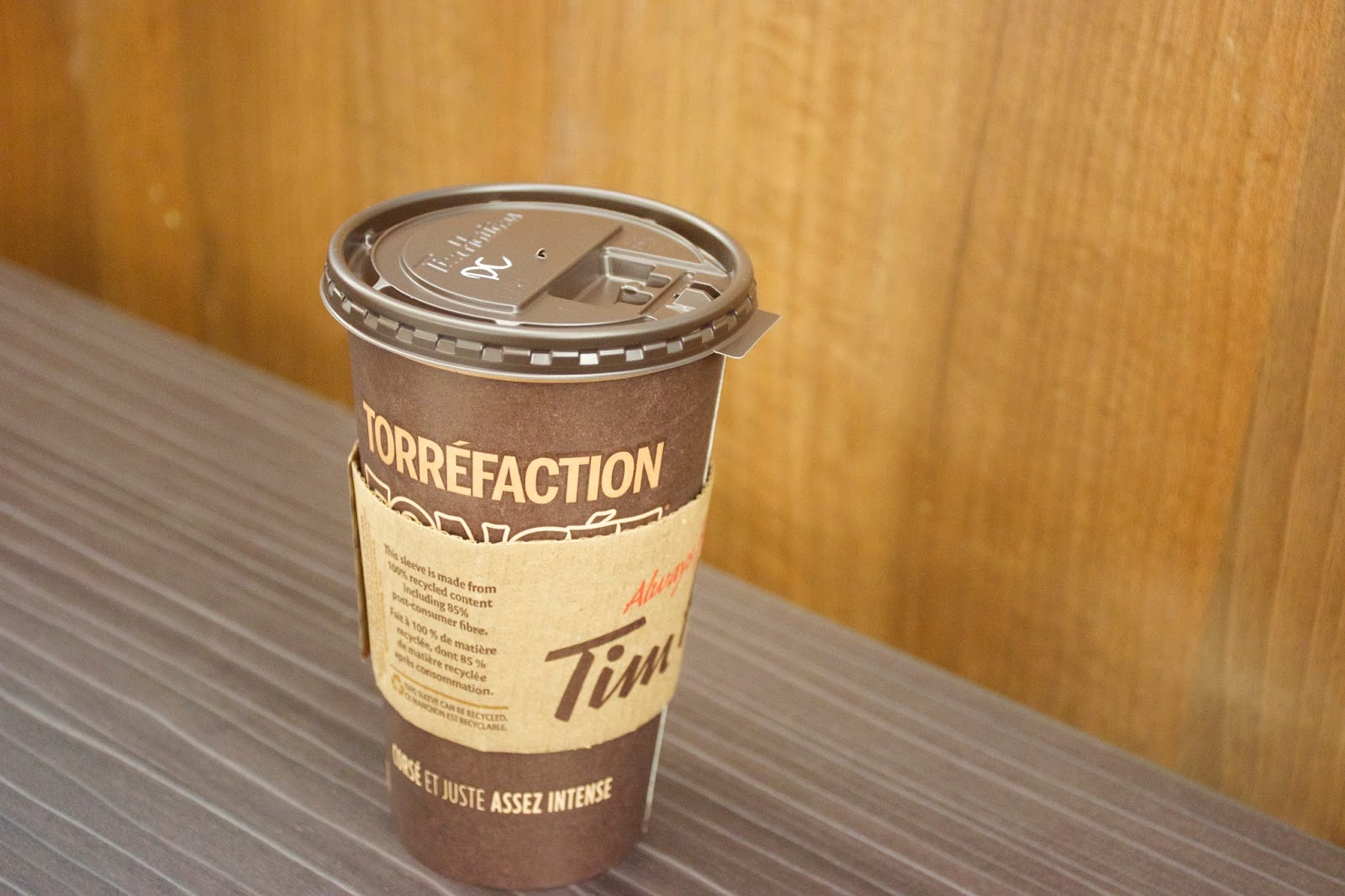 Earlier that day my dad and I got some hot chocolate from Timmy's to warm ourselves up from the chilly weather! :D 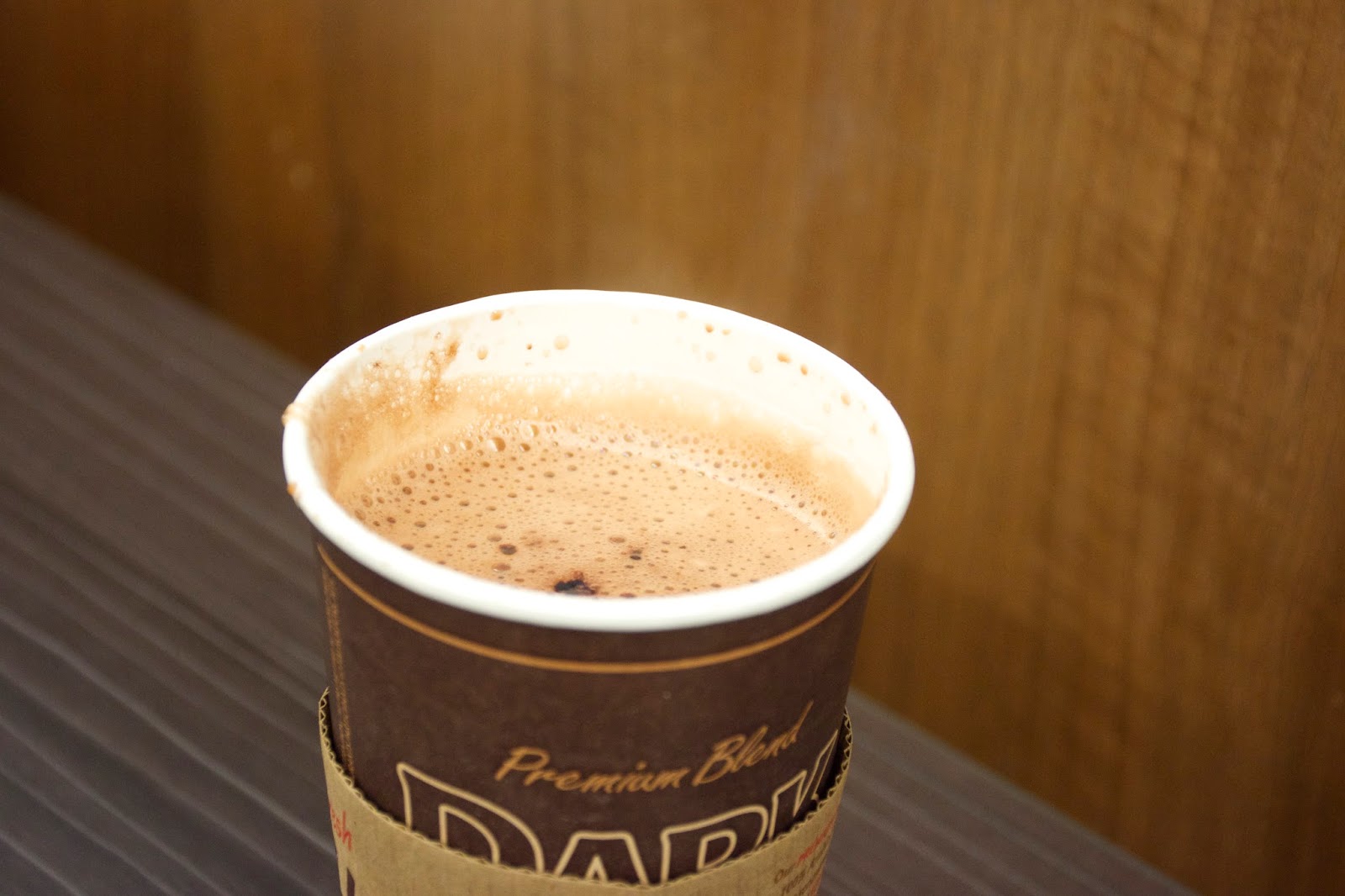