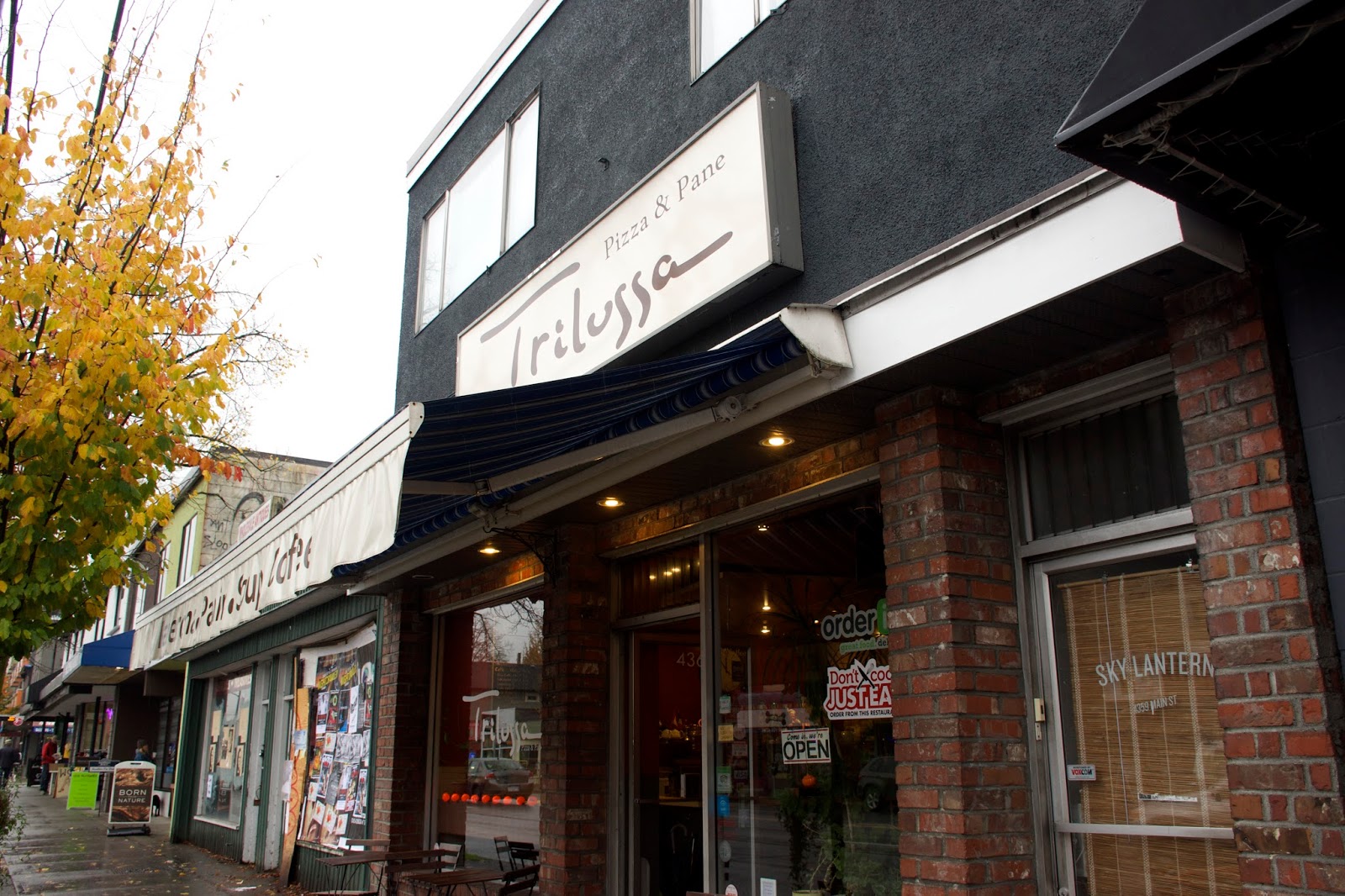 Remember I told you guys I was craving pizza yesterday? Before you go "Heyy, I thought you were trying to eat healthy!" Well I did eat something healthy...sorta LOL! I made the healthiest possible choice, and got a pizza "salad" hahaha! That's as healthy as pizza can get! ;)

Anyways, I found this place on Yelp while I was strolling down Main St, aka Hipster Central haha! It was pouring rain and I was walking around like a idiot looking at reviews of all the restaurants I was passing by LOL (the things I do for this blog!) I saw some pretty interesting ones that want to try out: The Reef, Shanti's Curries, Solly's Bagelry, and the Splitz Grill!

Then I came across Trilussa, which has a 4.5 star rating on Yelp, which is...really hard to come by! Apparently this place makes the most authentic pizza in all of Vancouver! One guy even claimed that he had traveled the world and this was the best pizza he's ever eaten!

While I was noshing on my pizza alot of people came in, and it seemed like they were all regulars because the owner was greeting them all by name, which is always a good sign! 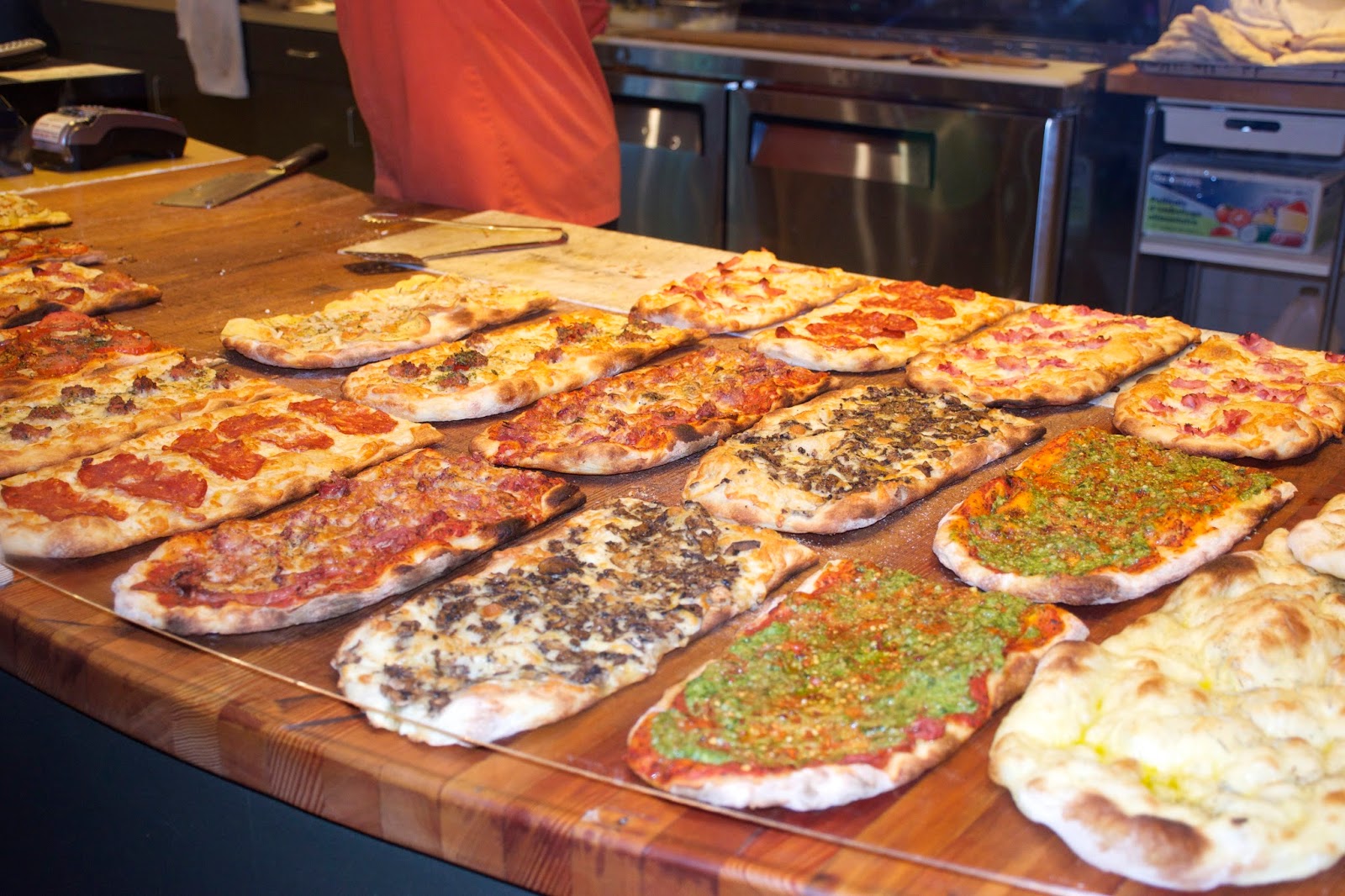 Soo many choices!! I WANT ALL OF THEM!! If only I had the money...and the stomach space LOL! ;) 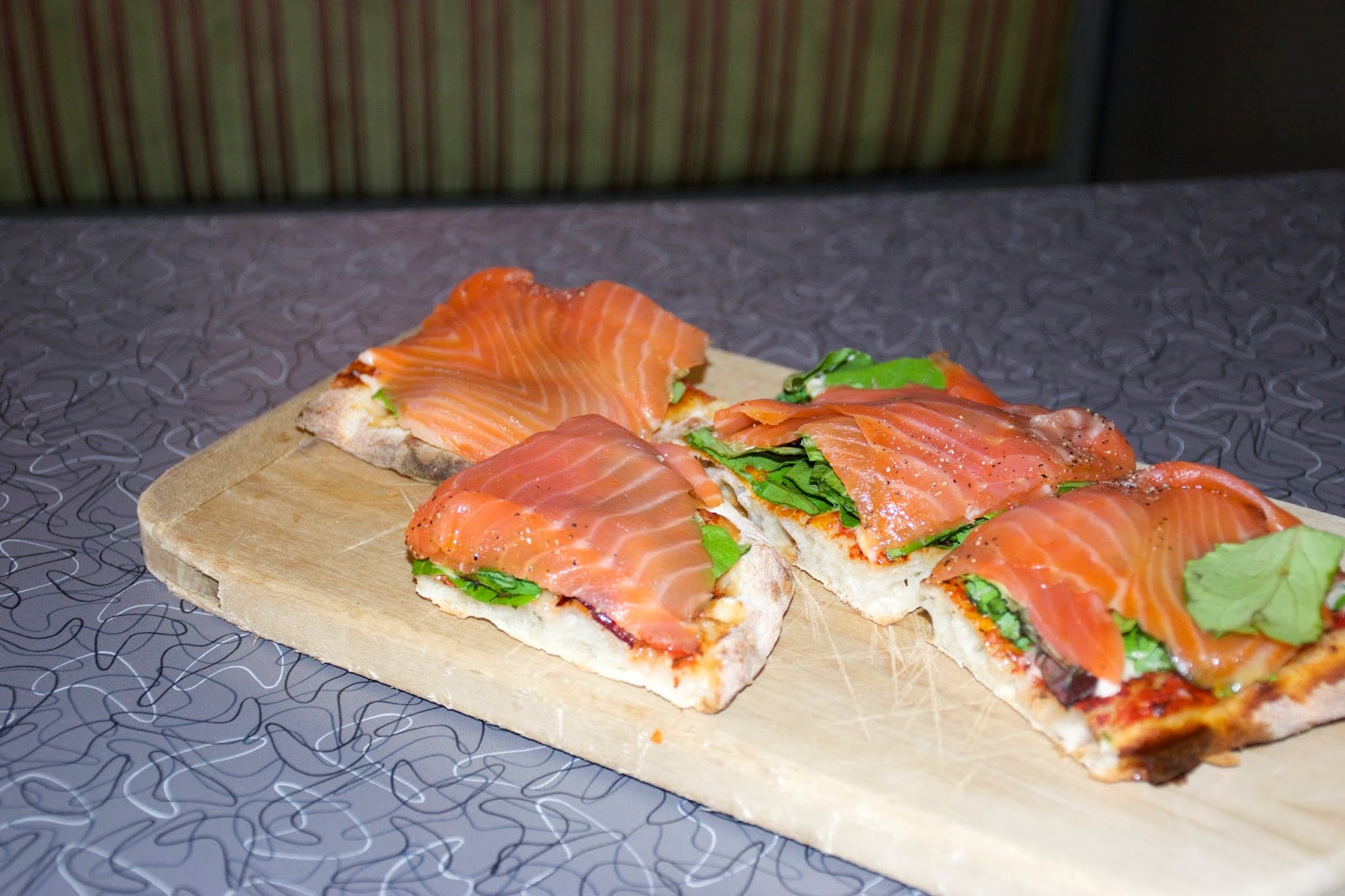 The Vancouver $6.34/Regular Size
3.5/5 stars
For premium, authentic pizza made with fresh ingredients, this was a great deal! 4 pieces was enough and really satisfying! They serve all their pizzas on a paddle board, which adds to the appeal haha. The "Vancouver" is topped with smoked salmon, and organic salad! There was also (what tasted like) thousand island dressing in it. The smoked salmon had a subtle smokey flavour, and was really flavourful from the spices. The pizza dough itself was a little hard and doughy for my liking, I prefer soft dough that sags a bit lol, but it wasn't a big deal! 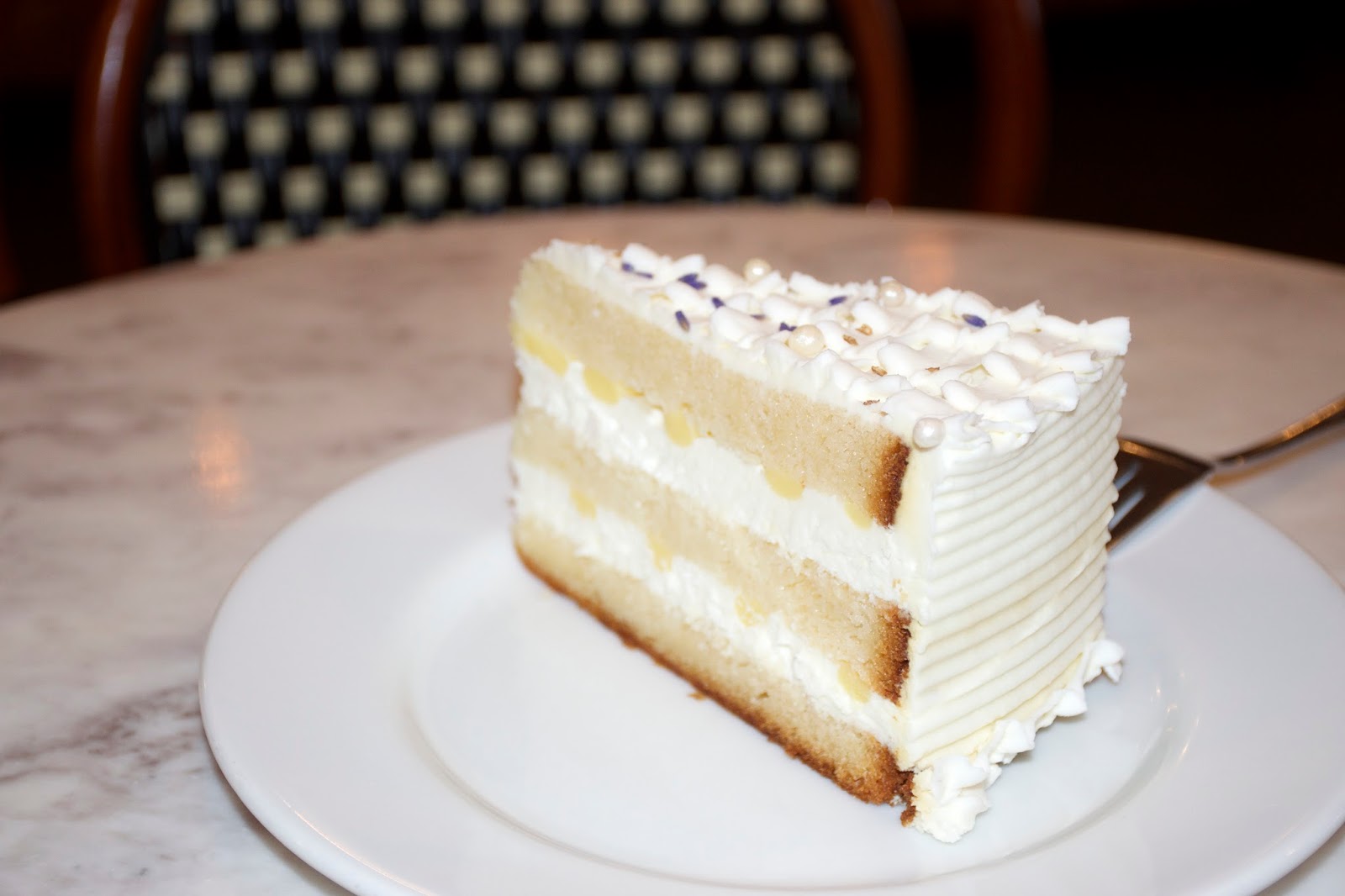 Lemon Lavender Cake from Trafiq
3.5/5 stars
Well...so much for being healthy! After lunch I went over to Trafiq a few doors down for some dessert heheh! Seriously, how could I resist? Cakes are just so...ENTICING!! First of all, isn't this pretty? It's decorated with dainty little "pearls" on top and purple lavender flakes!

This slice was huge lol, I wasn't expecting it to be this big! The cake was super moist and airy! Texturally impeccable. As for flavour, I found the lemon/lavender flavour to be a bit weak. You could only really taste bits of lavender interwoven into the layers. The frosting itself was rather sweet though. 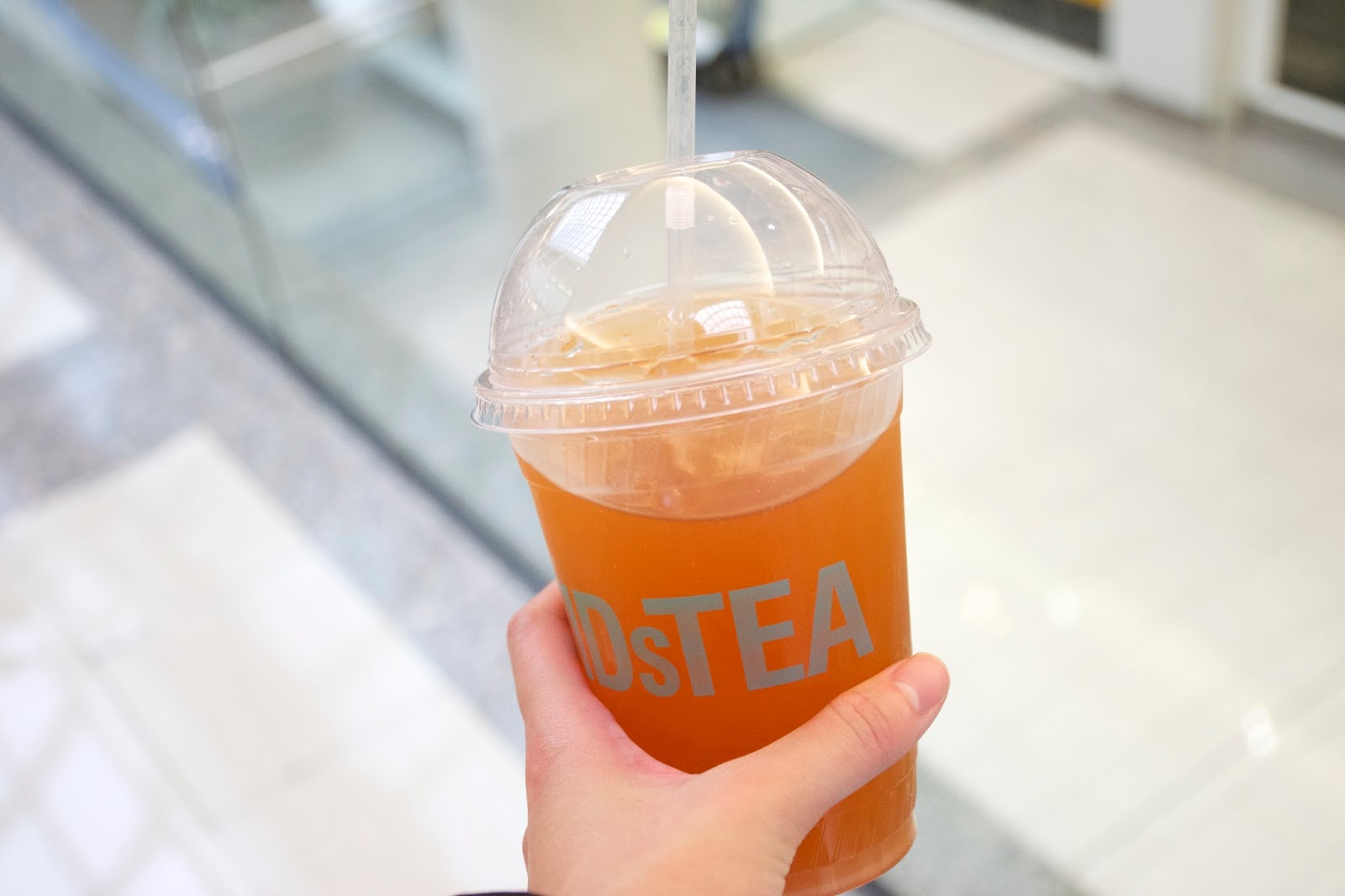 Red Velvet Cake Tea from David's Tea
3/5 stars
So after lunch I went over to Metrotown to do some shopping haha, and I got thirsty in the process, so I got some David's Tea!!
When I saw this I knew I had to get it LOL! Red velvet cake...in tea form? Get out!! So I got myself some hehe. And it tasted exactly like red velvet cake! Except with a strong black tea undertone. It has white chocolate in it so it's really sweet. While I was drinking it I read the ingredients online and I was disappointed to learn that this actually has "artificial" flavouring in it. Since David Tea's markets itself as a "premium" brand I guess I was just expecting something more natural. Oh well!