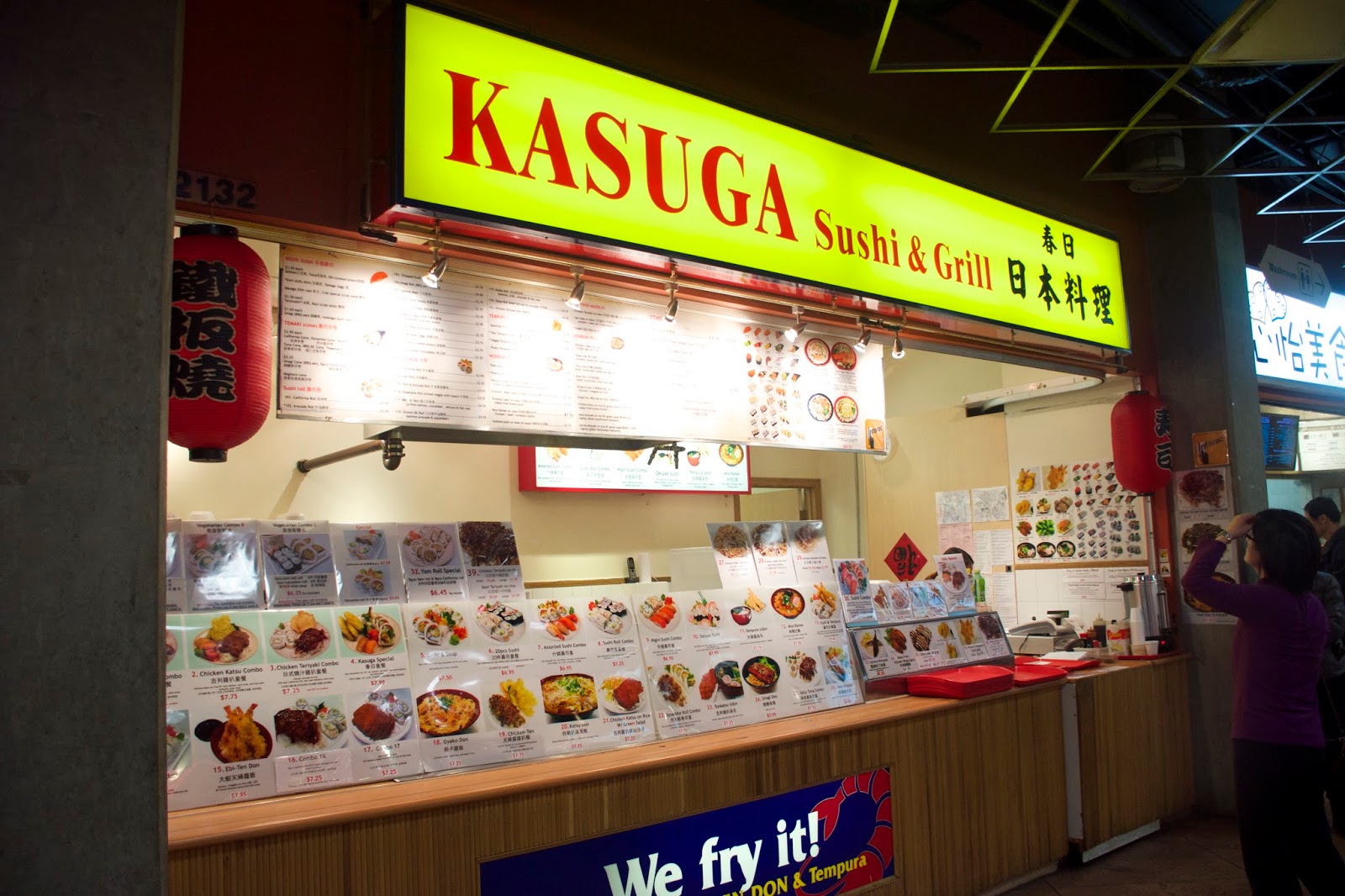 I'm letting the cat out of the bag. I enjoy eating mediocre food sometimes. Yes. I said it. But I have my reasons LOL. Mediocrity serves its purpose, I like eating less than impressive food so I can compare it to higher quality, well prepared food. It makes me appreciate "good" food alot more. Yes, it's usually a bad idea. I'm taking a gamble. But do I end up regretting it? Heck no LOL! I go in expecting mediocre food, and mediocre food is what I get LOL!

There are plenty of better than average sushi places near Metrotown, so why did come here? I use to eat at Kasuga when I was in highschool so I wanted to see how much my standards have changed and compare it to "good" sushi LOL. And it was definitely super nostalgic haha! I thought Kasuga was pretty decent back then...but back then I didn't know the difference between a maki and a nigiri LOL...so that's saying something. Needless to say, I've definitely come a long way since then! ;)

Kasuga is run by a Cantonese mom & pop duo! They're one of the larger stalls in the food court, and they've been in business for over 8 years! I don't like giving bad ratings for small family run businesses like this because I know how hard it is, but as a food blogger, I have to speak da truth LOL! In the end, it all comes down to the food!

I've had their chicken teriyaki, tempura, cali rolls, and katsu before and the only item that I remember liking was the chicken teriyaki, probably because it was drenched in copious amounts of sauce LOL! The tempura was not that great, the tempura batter being really thick and a bit hard. The katsu was really thin and dry, but the cali rolls were half decent! But that was 1-3 years ago so things may have changed! :)

If you're really craving sushi when you're in the Crystal Mall food court, Hana Sushi is a better option! It's not great, but it's authentic, and from what I've tried, better than Kasuga! You can read my review of Hana here: http://www.vancitynoms.com/2014/08/hana-sushi-crystal-mall.html 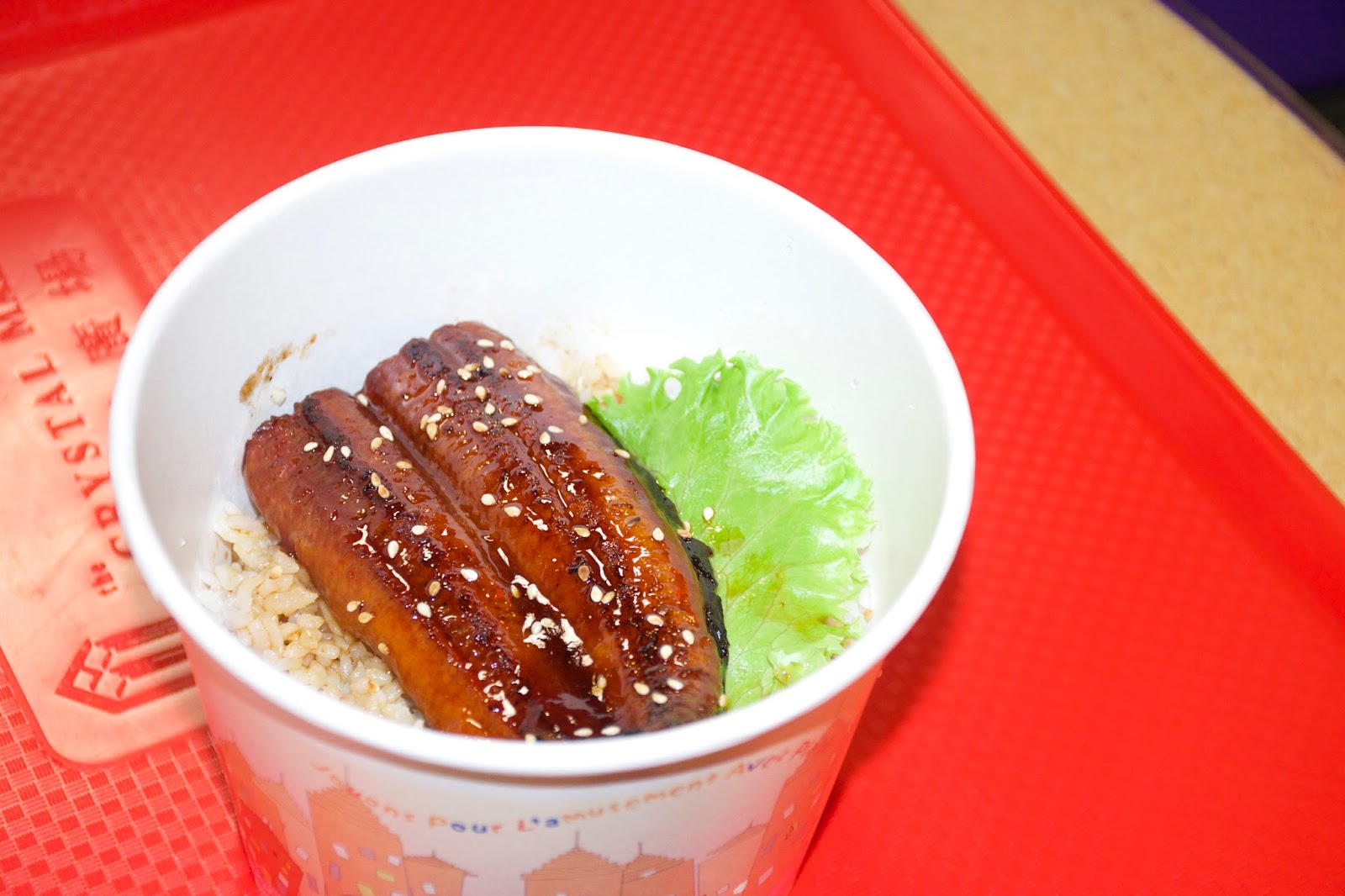 Unagi Don $7.95
My mom's rating: 1.5/5 stars
My mom had the unagi don. She thought it was "meh" and for the price, we weren't expecting more. The donburi came in a deep bowl filled with a ton of rice! The unagi was glazed with a generic sweet-teriyaki sauce. The unagi didn't taste fresh and it was a bit too fishy tasting. It was lightly grilled and the meat itself was semi-moist. The rice got a bit soggy from being drenched in the sauce. Overall, considering that unagi dons usually run $12 +, this was a semi decent attempt. 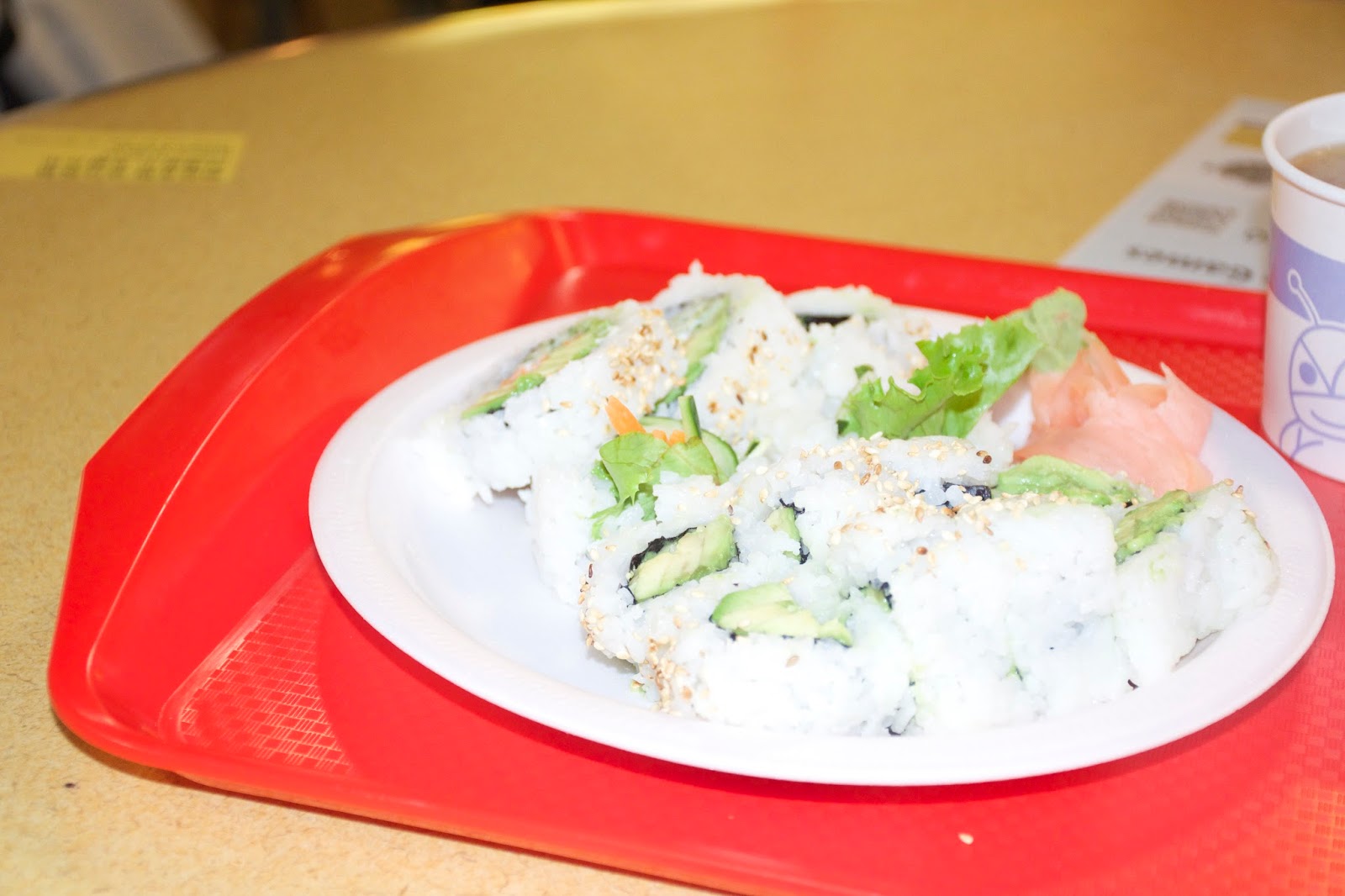 Vegetarian Combo $7.25
Avocado Roll: 2/5 stars (Taste wise)
Their sushi rolls haven't changed one bit! Guess I just had lower standards back then. In my teenage mind: mushy, chinese sushi rice was a-ok LOL! Now? Not so much haha! They use short grain, sticky chinese rice, which every foodie knows is a big no! They do season it with rice vinegar though! The avocados had a few brown spots (which isn't a big deal.) Taste wise, it was pretty predictable, and not bad! Texture wise, since the avocados were already really mushy, the mushy chinese rice was not a good combination. The rice-filling ratio was pretty even steven, which was nice! 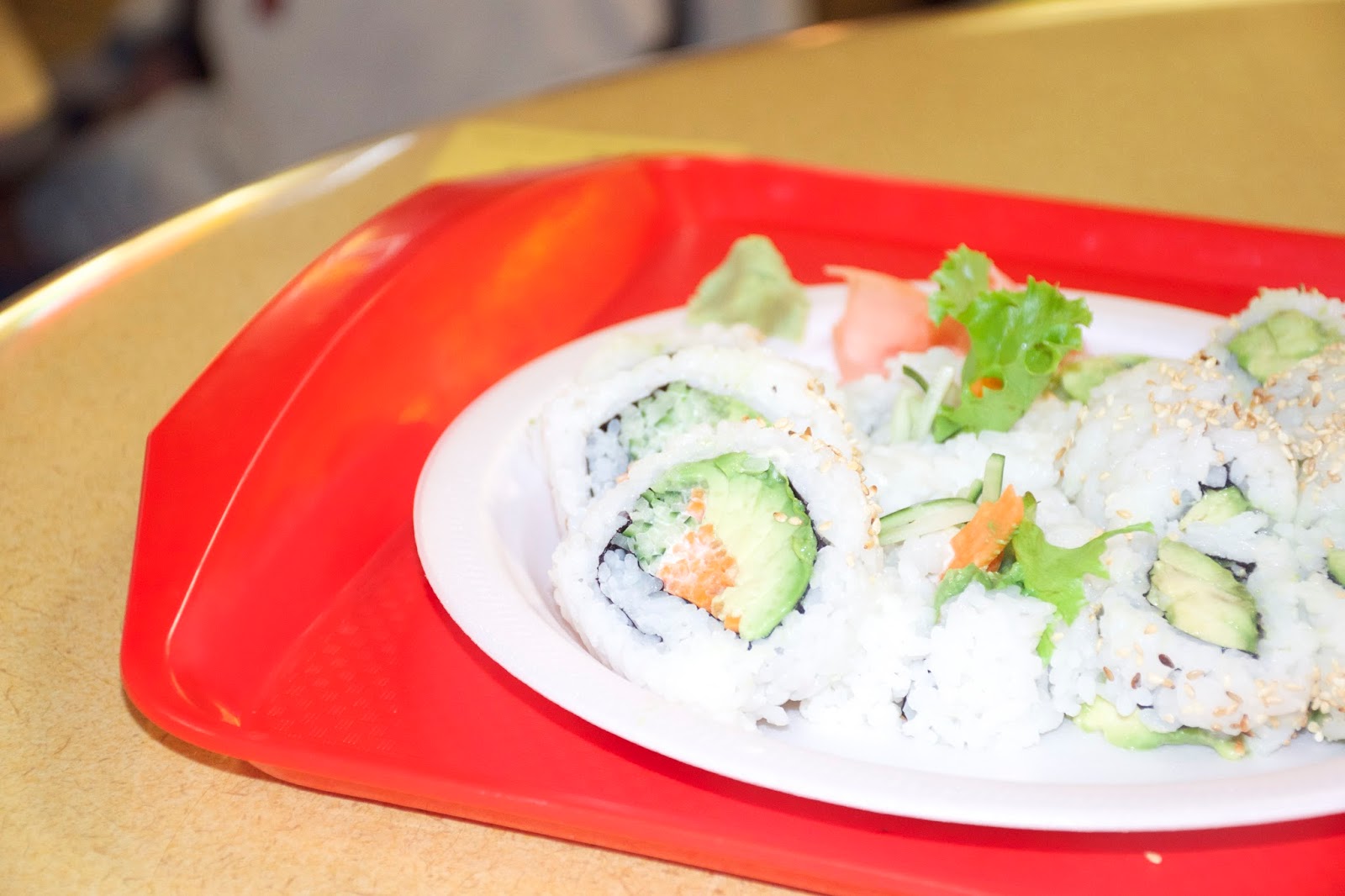 Veggie Roll
2.5/5 stars
This was pretty much the same as the avocado roll, except it had carrots, cucumbers and mayo in it! The mayo added alot more flavour, and the avocado they used in this roll was noticeably fresher. It was neatly wrapped too! Aside from the fact that they use chinese rice, this was pretty decent! There was alot more filling than rice on this one, which I appreciated! 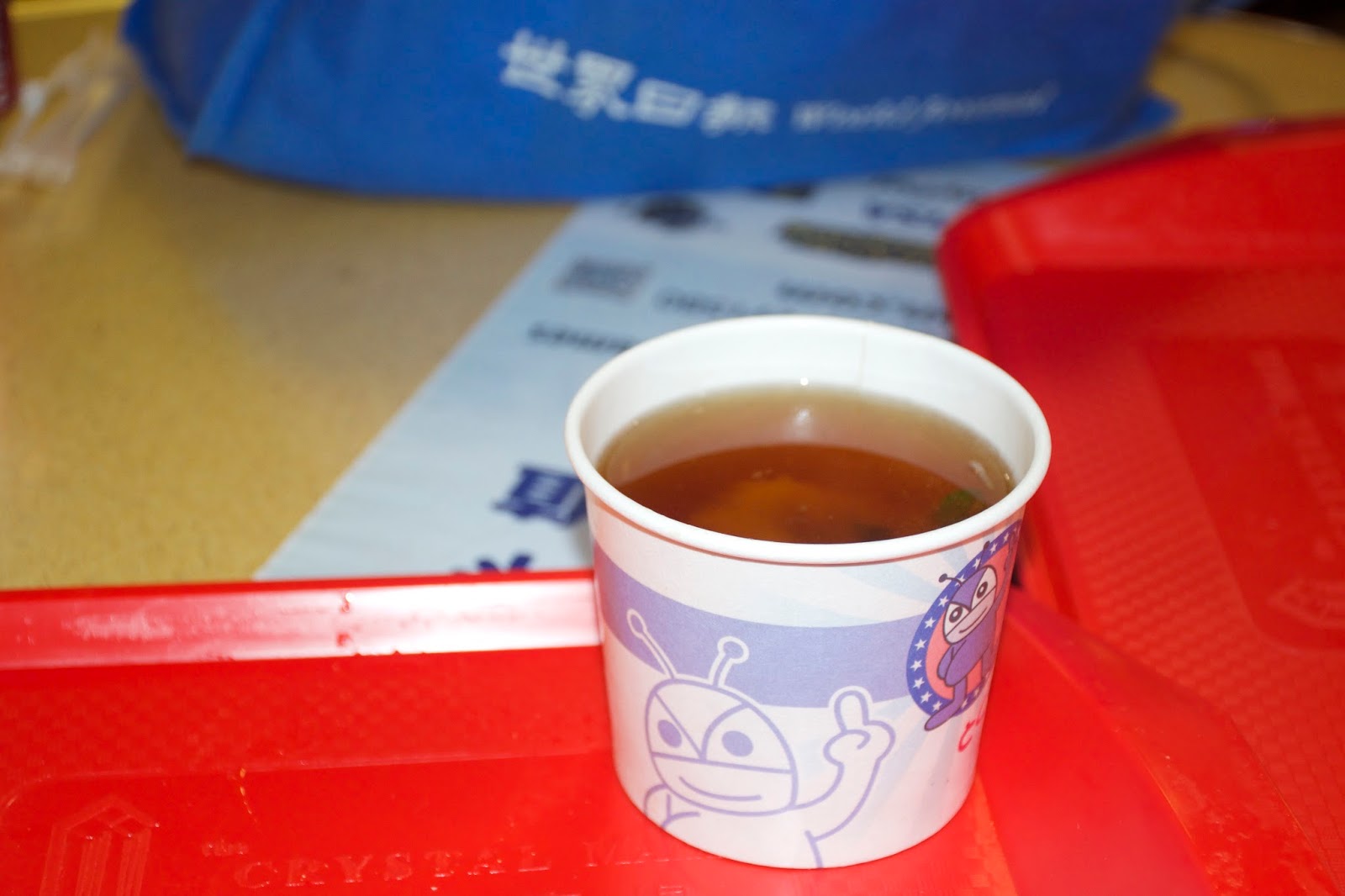 Miso Soup
0/5 stars
My veggie combo also came with a side of miso soup! This was pretty dissapointing...it was basically msged up water with very little miso in it. The colour was off too, it was a deep brown colour and it tasted a bit like soy sauce. 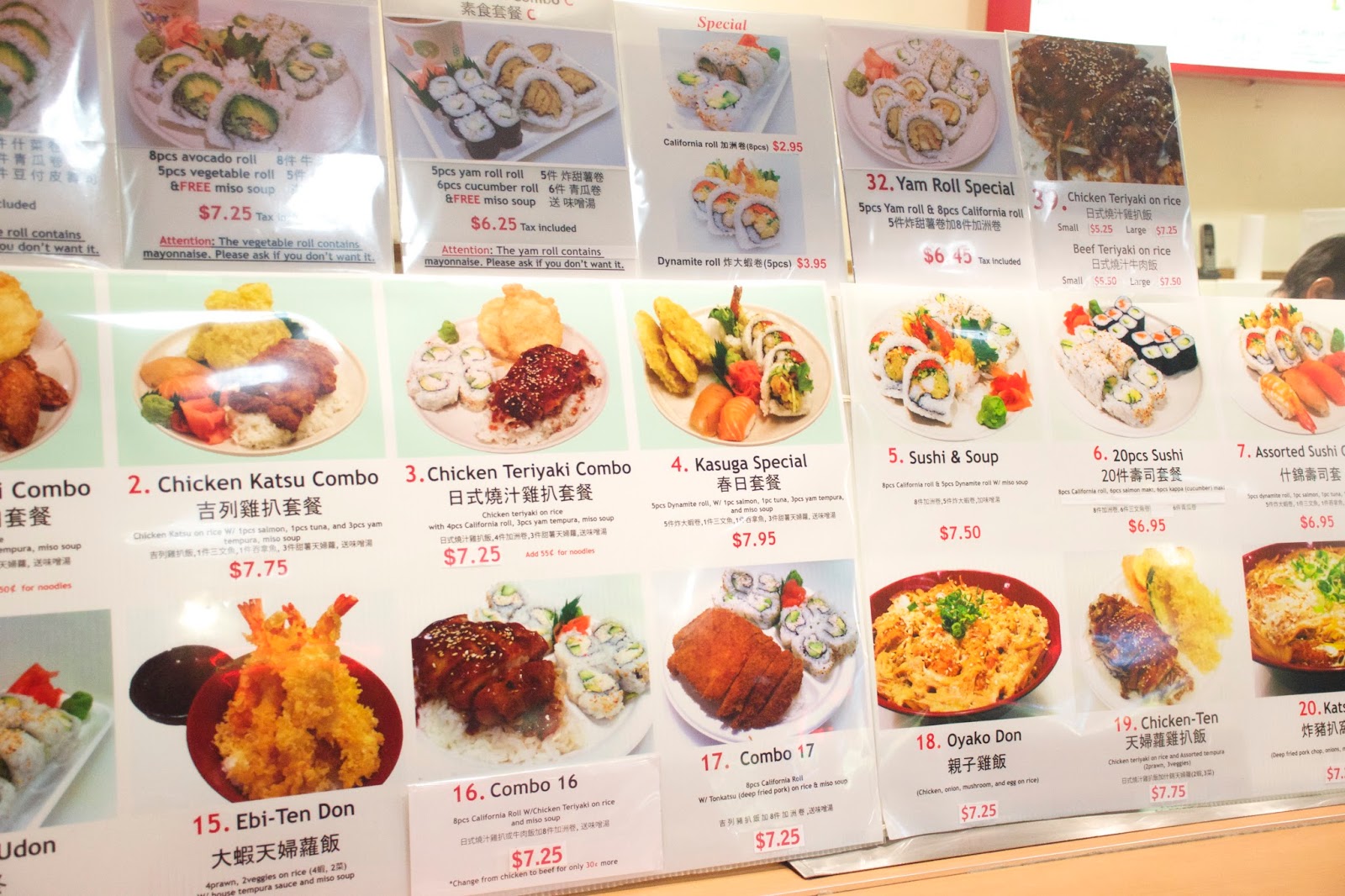 (Click to Enlarge!) I like how they have photos of their combos, and how they have chinese descriptions, which was really useful for my mom! 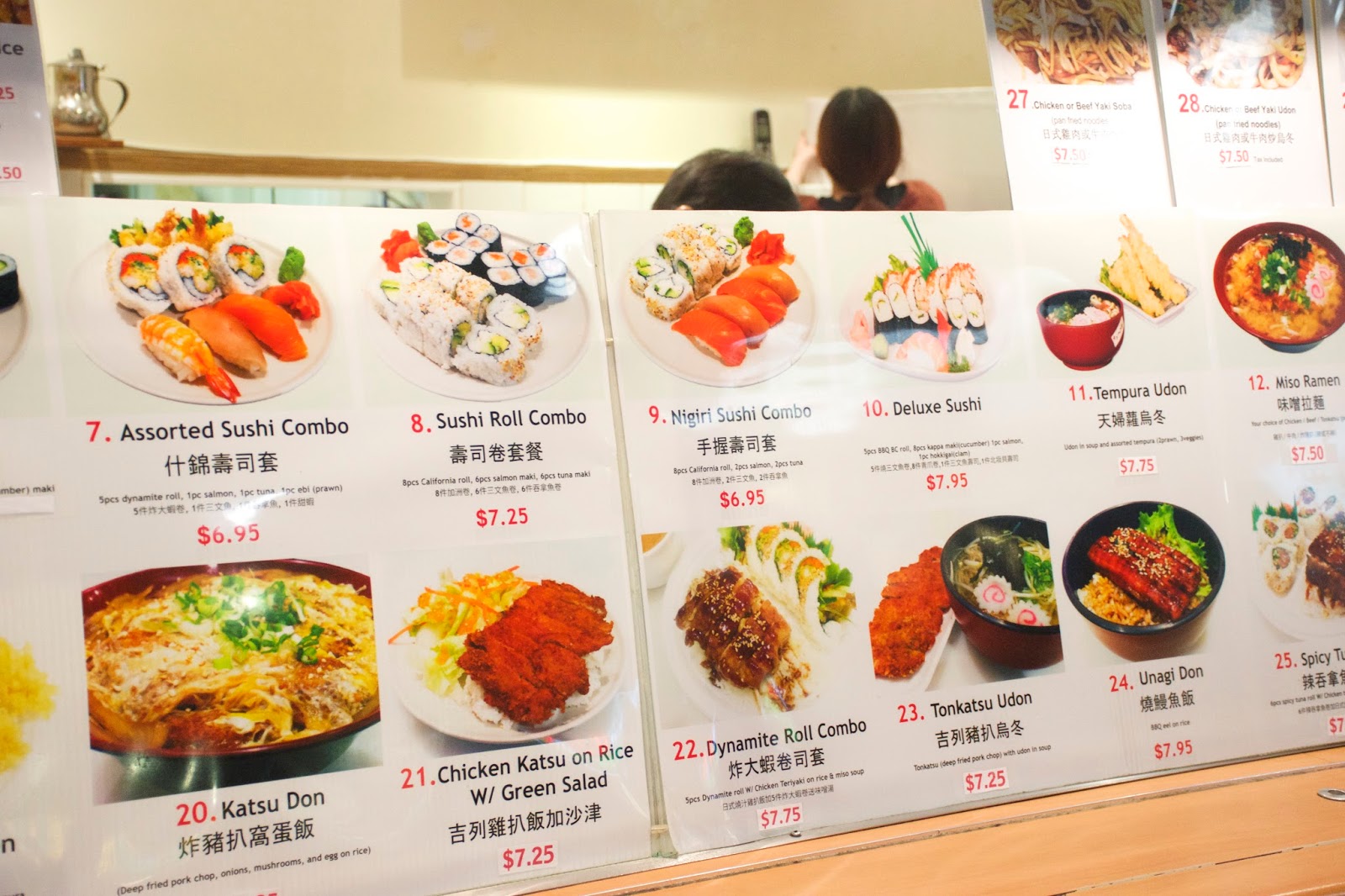