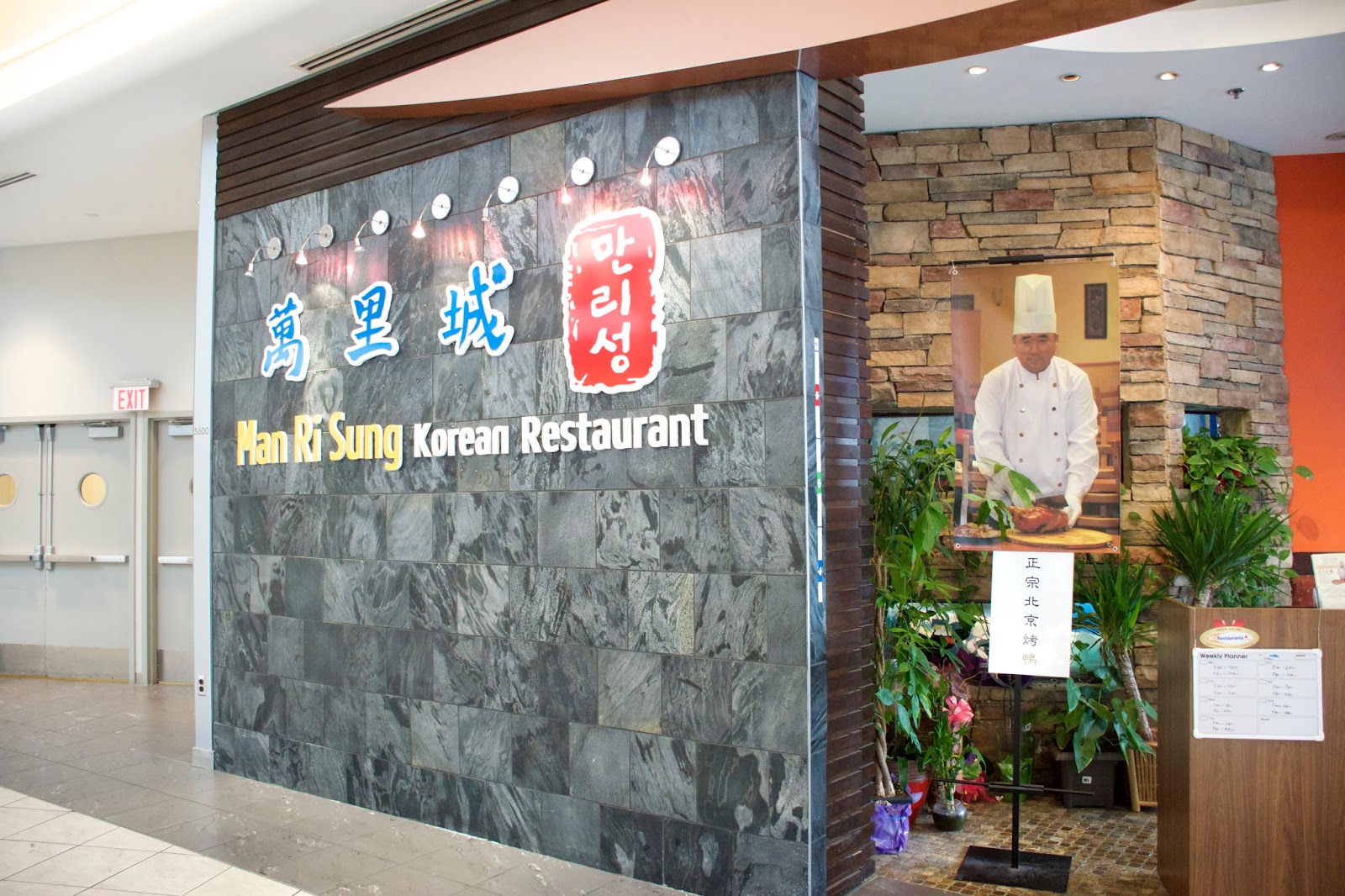 I was pretty shocked that my dad wanted to go somewhere different for lunch today instead of having dim sum at South Ocean LOL!! The last time I tried going somewhere different for lunch, Strike (a taiwanese restaurant) beside South Ocean, he protested and made a bunch of excuses "It's completely empty" "I don't want Taiwanese food" "I can tell it's going to be terrible." He's definitely not a foodie LOL!!

He was really good mood today and agreed to go to Aberdeen for lunch instead! Turns out he was in SUCH a good mood that he agreed on going for Korean food LOL (he usually finds it too pricey.) Aberdeen actually has 4 Korean restaurants: the ever so popular Sura, the food court in Hmart, the Korean stall in the food court, and the newish Man Ri Sung!!

I was considering going to Sura downstairs, but decided against it, because I want to bring my mom there instead! My dad always rushes me when I eat, and since Sura gives you so much food, I probably wouldn't be able to finish it in 20 mins flat LOL! My dad is suchh a fast eater, he usually finishes his food in under 5 mins!! I'm the exact opposite, I'm a really slow eater because I like to savour my food LOL! It's not just about filling your stomach, it's about the whole eating experience!

Man Ri Sung is known for their Korean version of peking duck, which I unfortunately didn't get to try, because you need at least 4+ people, and you have to call in 2 hours beforehand for a reservation! Man Ri Sung is indeed run by Koreans, but they hired a few Mandarin speaking waitresses to cater towards the large chinese population in Richmond! 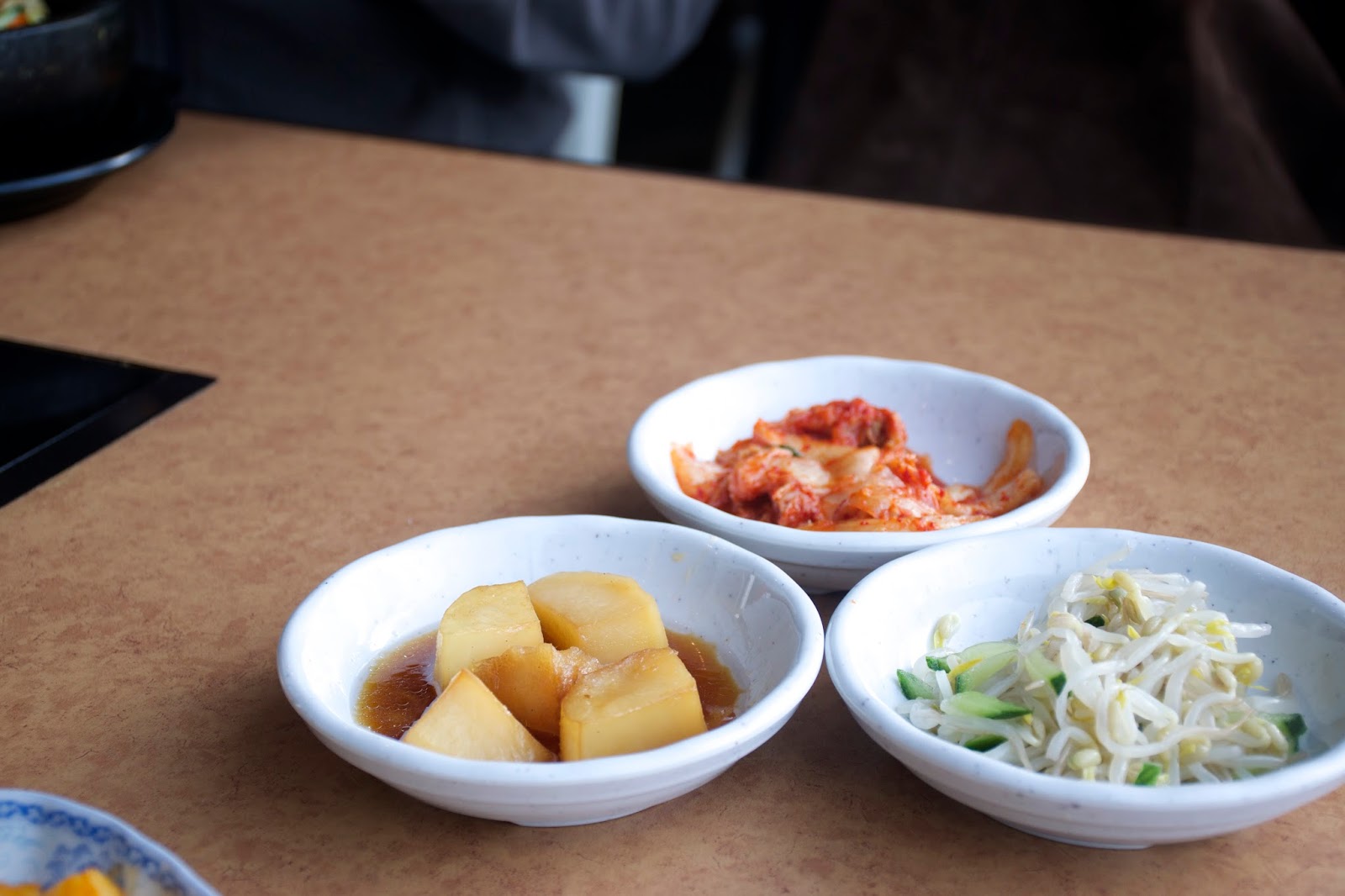 Banchan
2/5 stars
The banchan here was alright. The potatoes weren't that great. They weren't crusted on the outside and the sauce it was sitting in was a bit too watery. The bean sprouts were dressed in a light tasting sesame vinaigrette. I liked the kimchi though, it wasn't too spicy, and had a good balance of tang-spiciness. 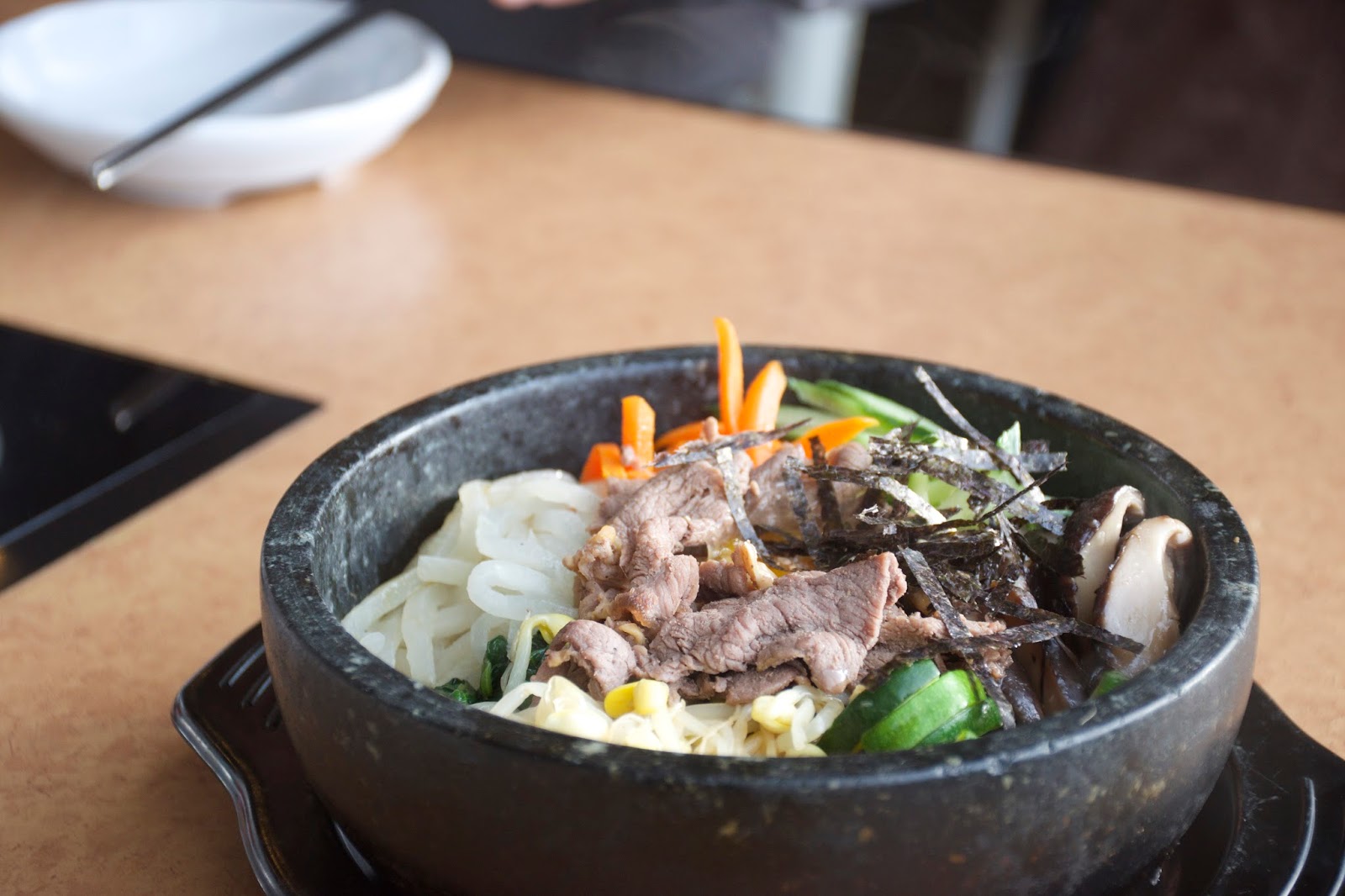 Bimbimbap $10.99
3.5/5 stars
My dad, being very predictable, ordered the bimbibap LOL! He doesn't like ordering soup or noodle dishes at restaurants, which really limits his options when he go out for Korean food haha.
This was a huge bimbimbap! Probably the largest one we've ever ordered. He was happy with it! This version came with bulgogi instead of minced meat! It had all your usual bimbimbap fixings and the ingredients were generous. 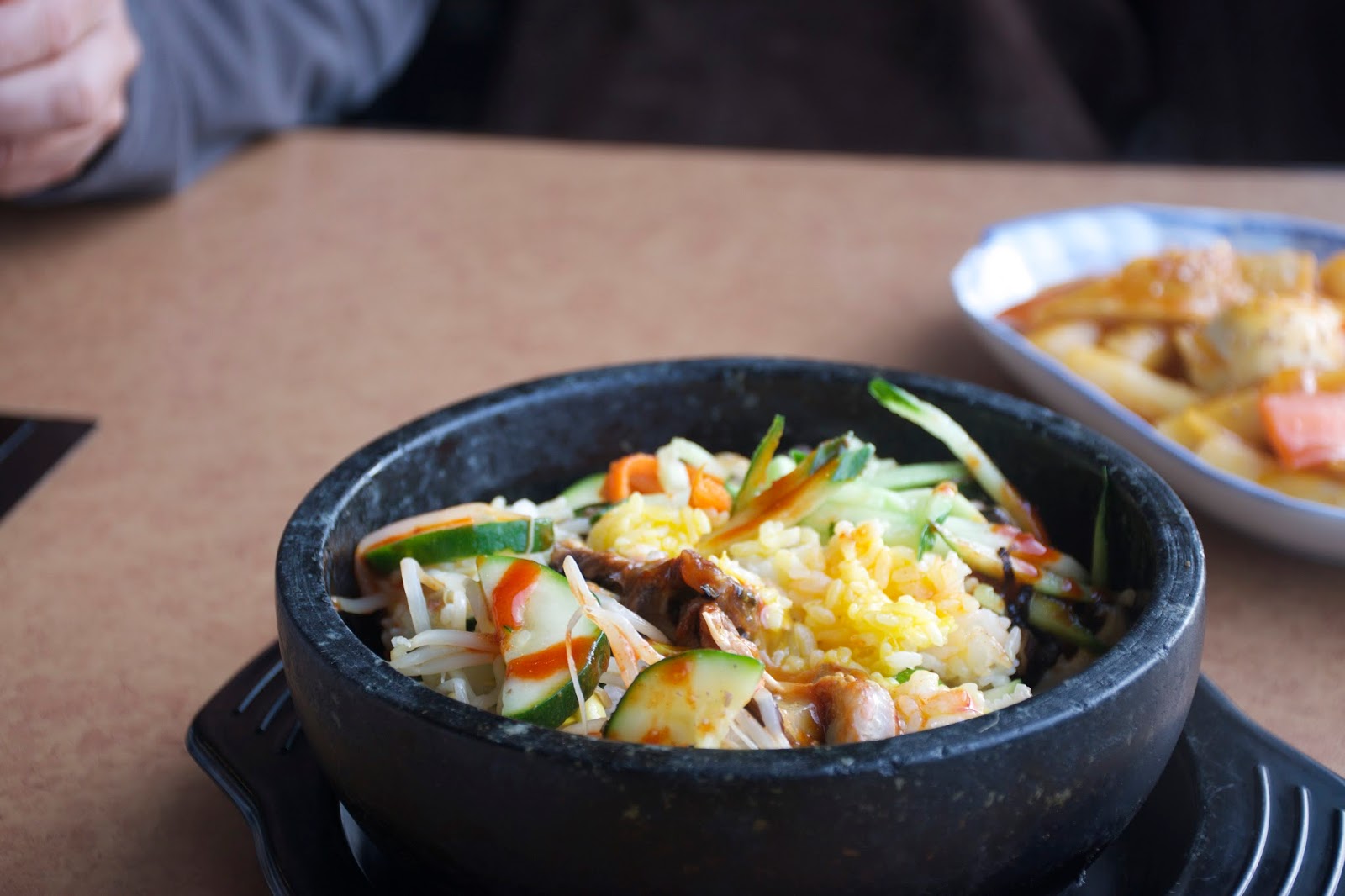 Everything mixed together, with added spicy sauce!! 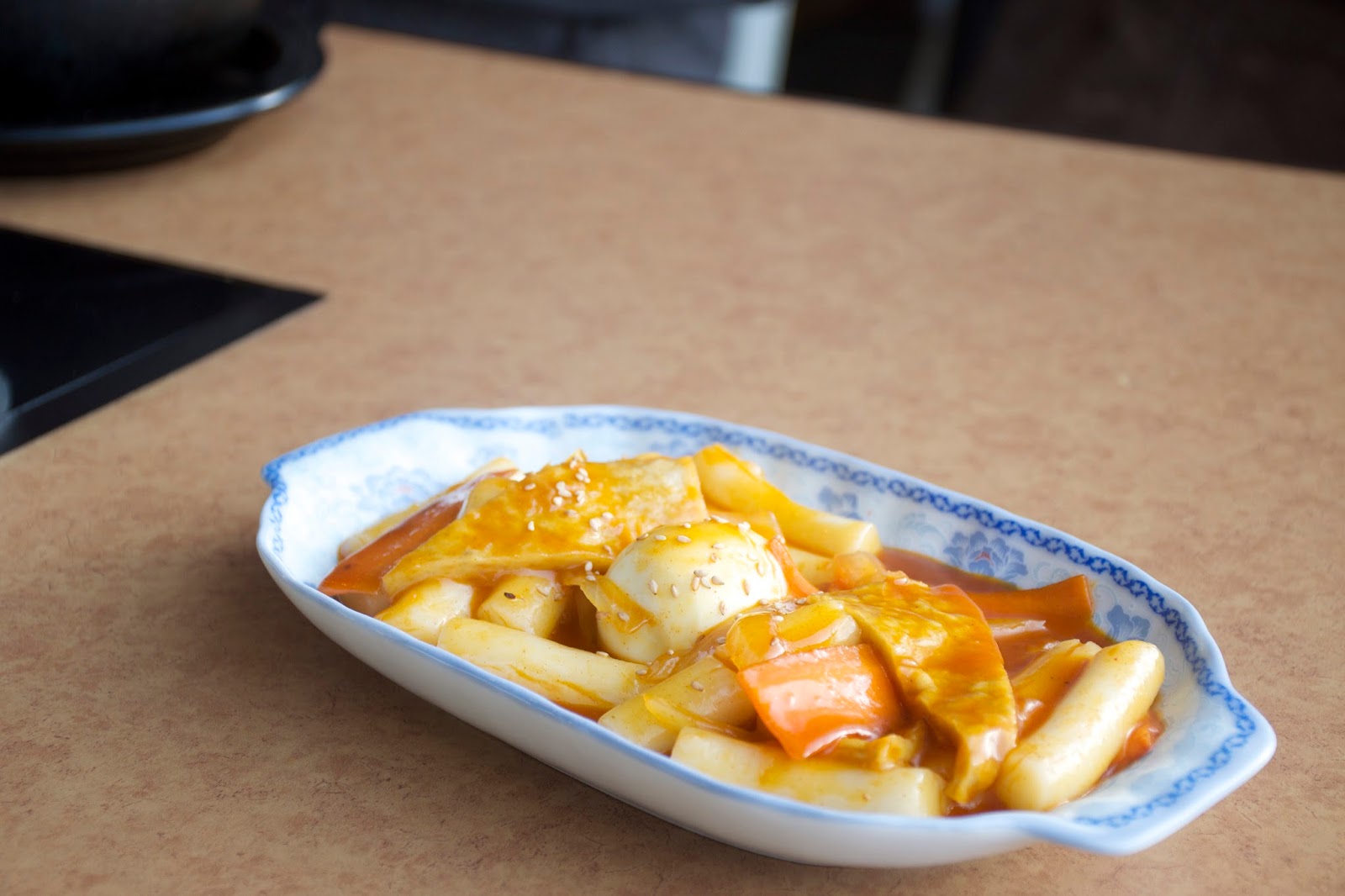 Spicy Rice Cakes $8.99 (Appy size)
4/5 stars
I had originally ordered the duck cumin stir fry, but the waitress mixed up my order and gave me rice cakes instead! I didn't really mind, because I love rice cakes hehe! This was alot better than I was expecting, I was expecting a straight up spicy sauce, but the sauce was actually a lovely balance of sweetness-tanginess-and spiciness! There was plenty of chewy, glutinous rice cakes, and even though it was "appy" sized, in the end I was still really full! Am I the only weird person who likes to order appetizers as my main? LOL!