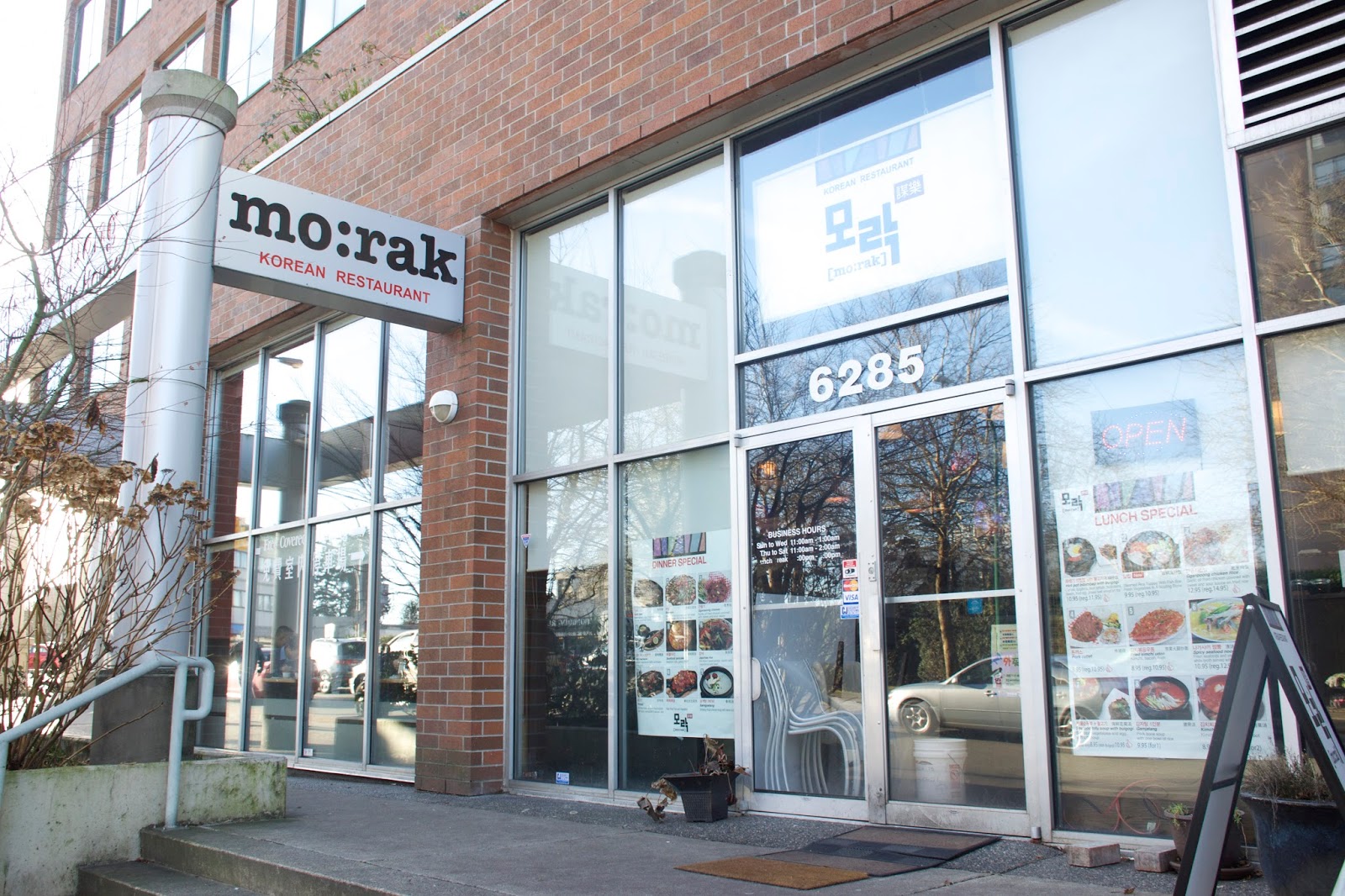 Note: I'm currently testing out a new template!! I'm not sure if I'm going to keep it or not haha! Still undecided but change is always good!! Ohh, and check out the home page, I have a spiffy new slide that displays my most "popular posts" from the past few weeks! Andd don't worry, I can always revert back to my old template! :D

I've been eyeing Mor:ak for the longest timee, and I finally dragged along my mom to come try this place out! It's right across from Metrotown, located in the same plaza as Lao Shan Dong and Cattle Cafe! It's not visible from the street because it's more off to the side, but it's not hard to find! If you're coming from the mall, exiting from the Bay's Kingsway entrance is probably the closet route! With all the awesome restaurants in the Metrotown area, why would you ever want to resort to eating mall food ever again? ;)  (Though I must admit I do quite often LOL!)
Wanting to save some money,we jumped on their lunch specials!! Most of their lunch specials are under $10, and some of them even come with 2 items! But then I spotted their bossom (which was advertised as a cute drawing), and I just couldn't resist ordering it hehe. It seems like this place is pretty popular because it filled up really quickly during our lunch on Sunday! Another thing I noticed was that most of the customers were Korean, which is always a good sign! Service was super friendly! We were served by a nice Korean girl who was all smiles and made sure we were taken care of!

Bossom $23
4.5/5 stars
The bossom, which is korean sliced pork belly, is their signature dish! I wasn't sure if it was going to be worth the $23, but it SO was!! This was delicious!! I probably ate 3 quarters of it by myself hehe since my mom had the japchae and bibimpap all to herself! The outer rim of the pork belly is layered with a sweet-savoury sauce which totally made my mouth water. The pork belly was oh so tender, with just the right amount of fat:lean ratio. The middle is filled with a subtly spicy sauce, topped with green onions, which adds another dimension of flavour to the dish! I would suggest eating the 2 elements separately, so you get two different flavour experiences! 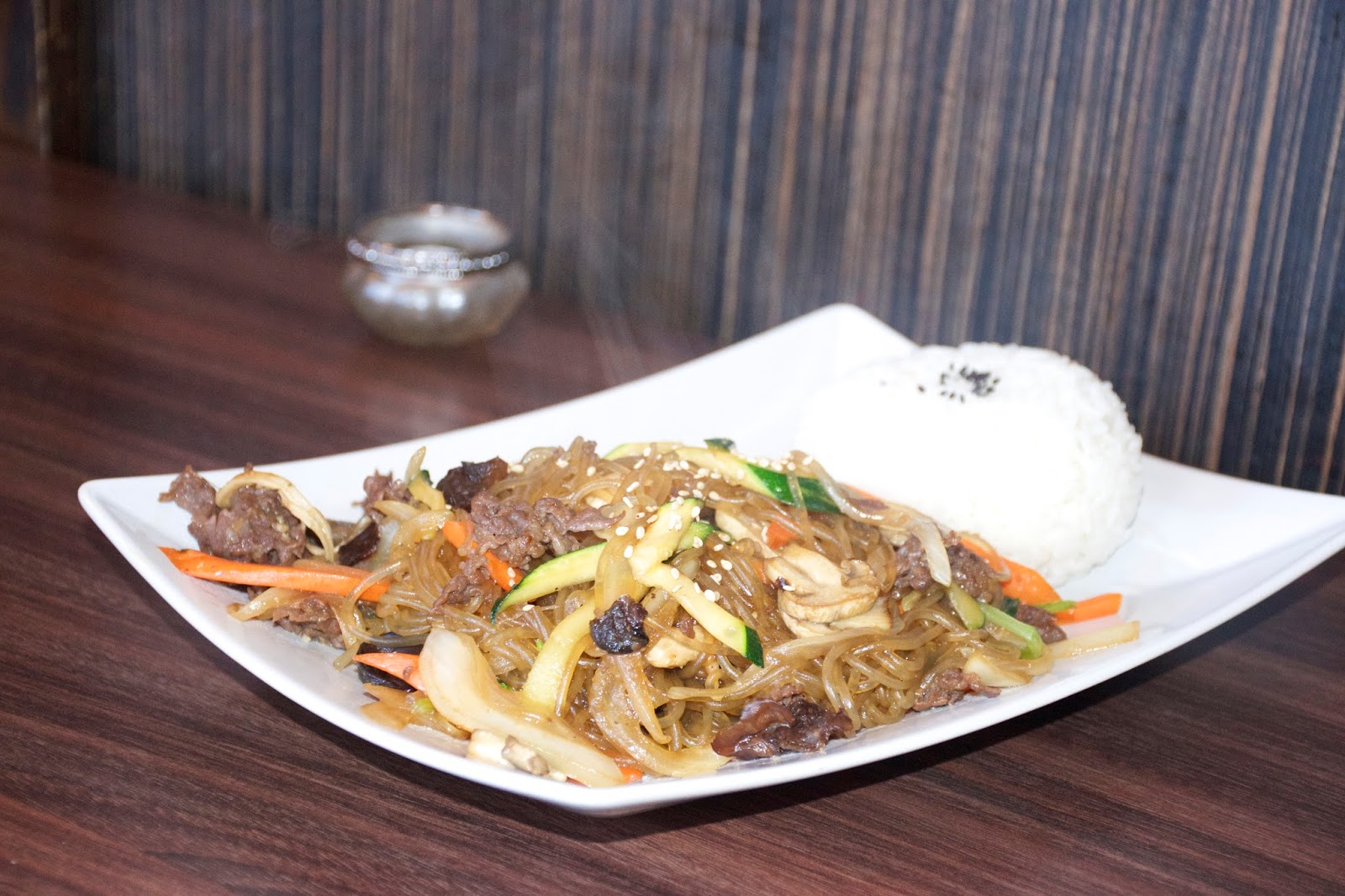 Japchae w/Rice $10
3.5/5 stars
My mom had the japchae, because she's never had Korean noodles before! This was quite a large portion, and well worth the money. It even came with a side of rice! The noodles were cooked al dente, with bite, with generous amounts of flavour. The beef was tender and the veggies plentiful. Definitely a solid version of japchae! 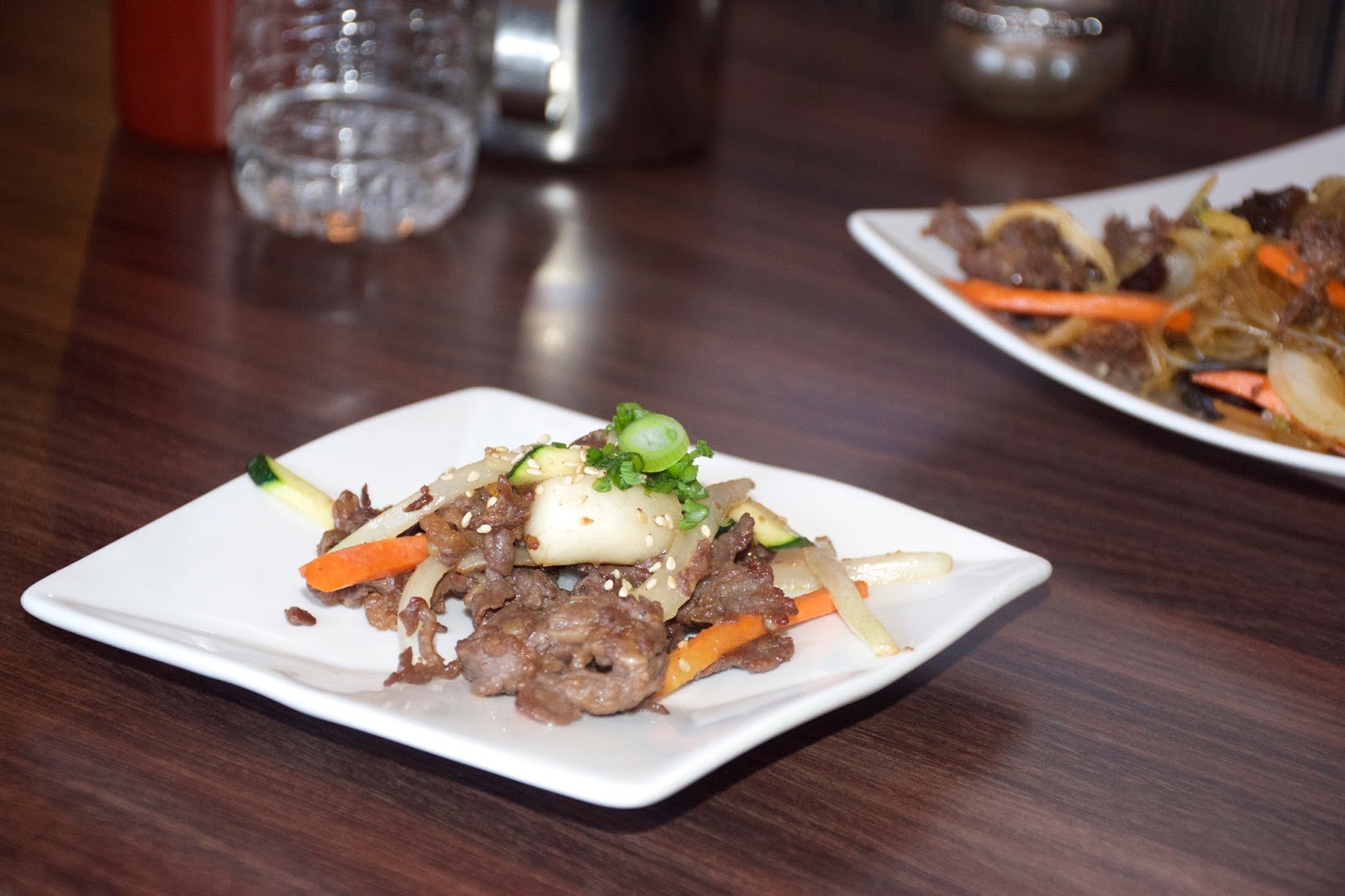 Bulgogi (came with bibimbap)
2.5/5 stars
My mom's bibimbap came with a mini side of bulgogi! The portion was quite small, but it was meant to be a side dish afterall! The meat was juicy, slightly charred, sweet-savoury. It even ahd a piece of ricecake in it! 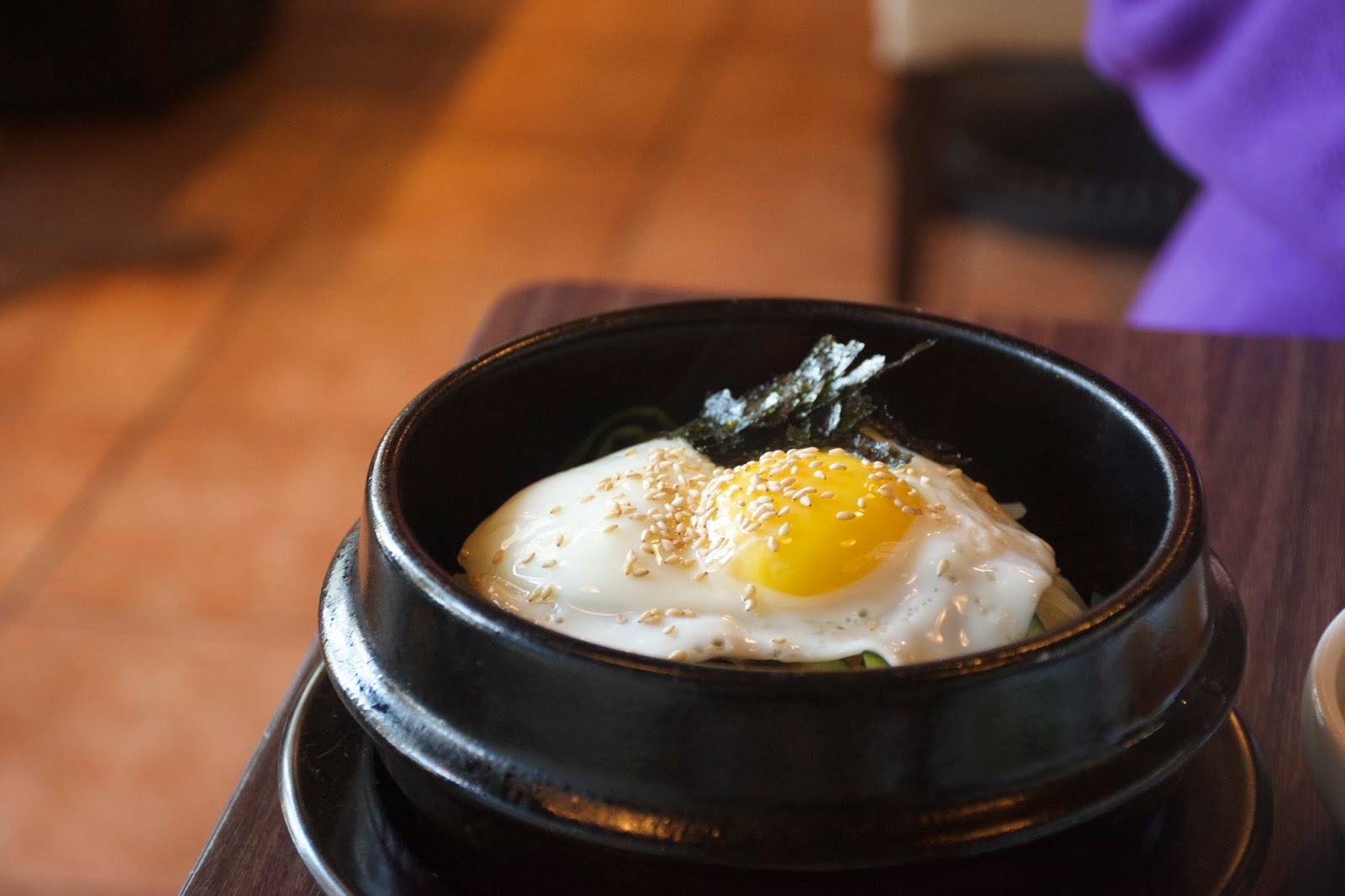 Bimbimbap Combo $10.95
3.5/5 stars
My mom really enjoyed her bibimbap, she said it was one of the best she's had! Even though it wasn't large, there was a generous amount of veggies and all your bibimbap fixings, along with a perfectly done egg on top, garnished with a liberal amount of sesame seeds! It also came with some obligatory spicy sauce for mixing! The rice got a bit crispy on the bottom which is definitely the best part!

Banchan
2/5 stars
The banchan here was decent, I found the bean sprouts to be a bit boring though, other places flavour it, but it was mostly bland, with just a hint of sesame oil. The kimchi wasn't that spicy, but the sweet potatoes were great! 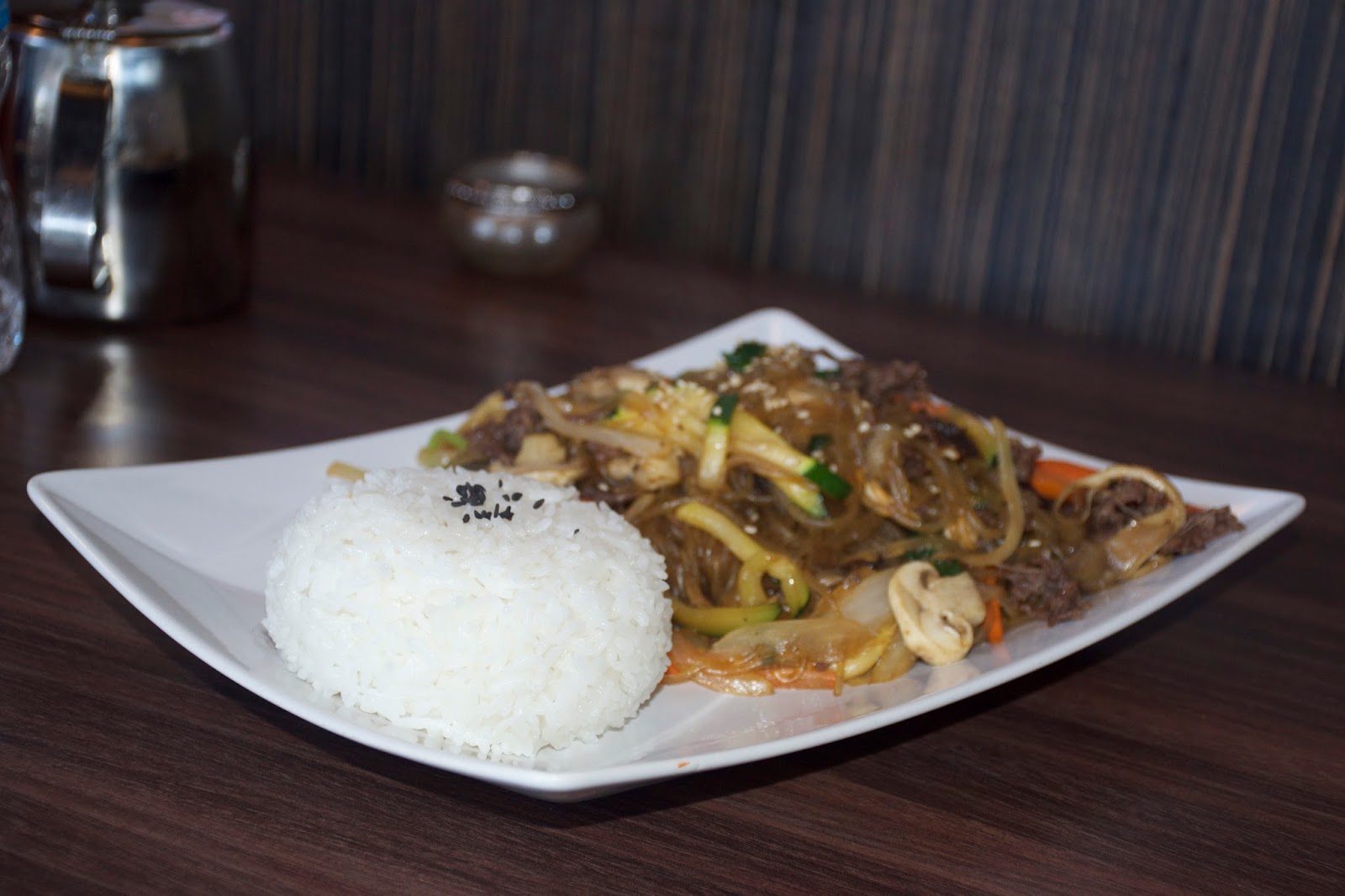 Still can't get over how perfectly round the rice was...so cute!! :D 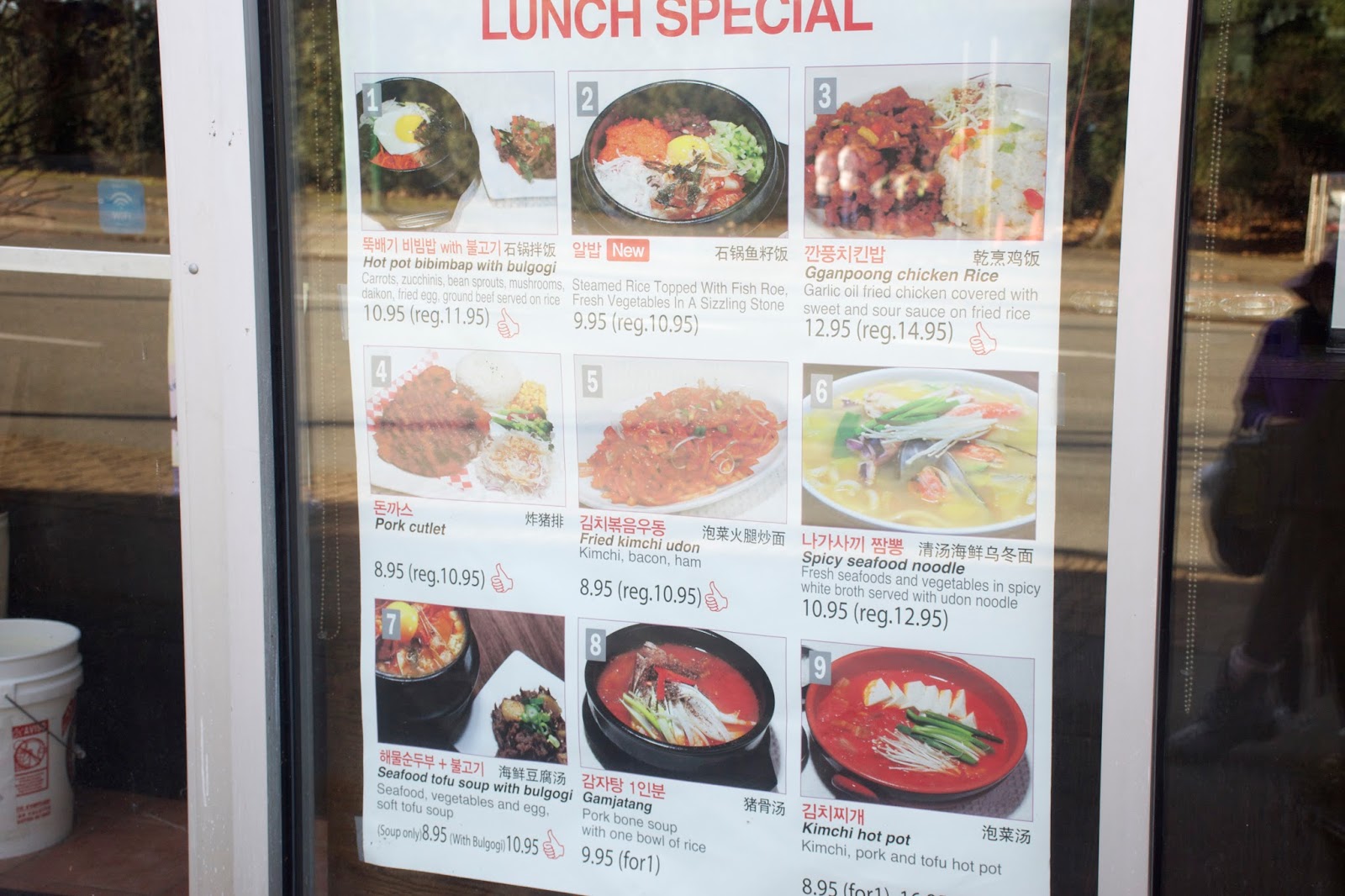 (Click to Enlarge) They have a ton of lunch specials under $10! 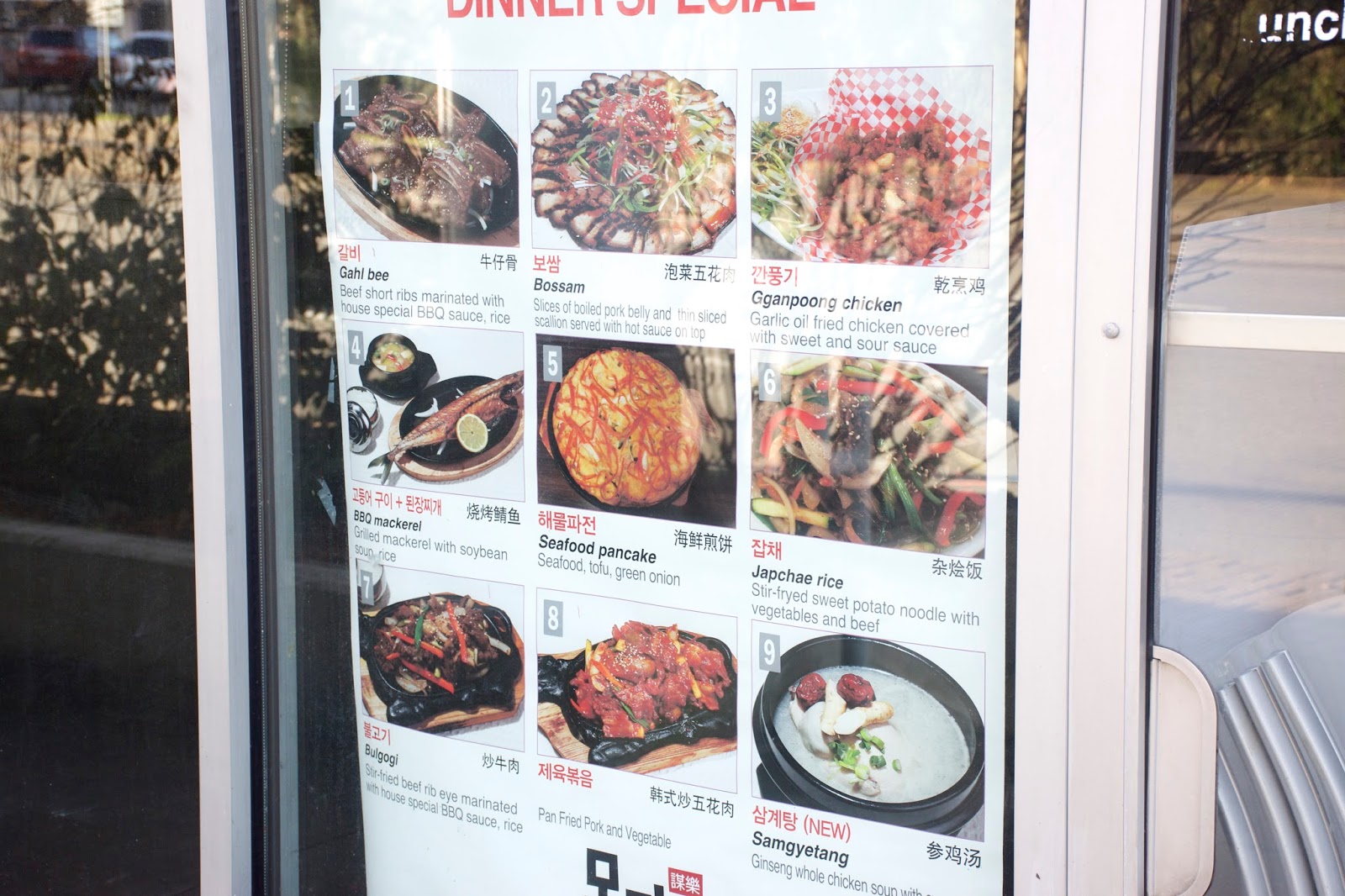 Some of their signature dishes!