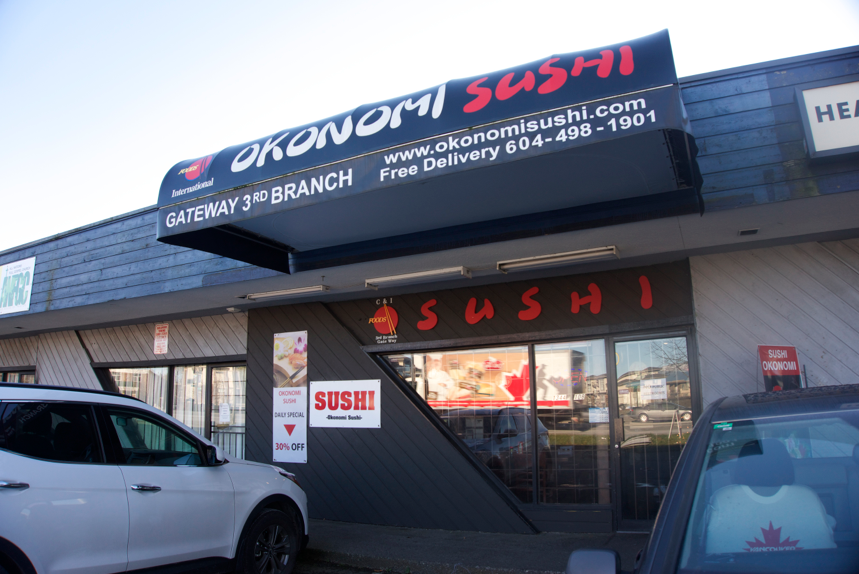 I've been wanting to try out Oknomi ever since I first found out about their patented pink sushi rice! Yes, you heard me! PINK SUSHI!! And it's patented!! And it's not just for show either, they claim that their pink rice is loaded with vitamins and nutrients because the pink colour is derived from fruit and vegetables! I don't know about you, but this was the first time that I had heard of such a thing haha. Not sure how reliable these claims are, but they definitely enticed me into eating their food...LOL!

Okonomi actually has 3 locations in the GVR which are all strategically placed within walking distance of skytrain stations! Two in New West (at Columbia Station, and New Westminster), and this one in Surrey, at Gateway Station! They seem to do alot of takeout orders which would be great for students on the go! 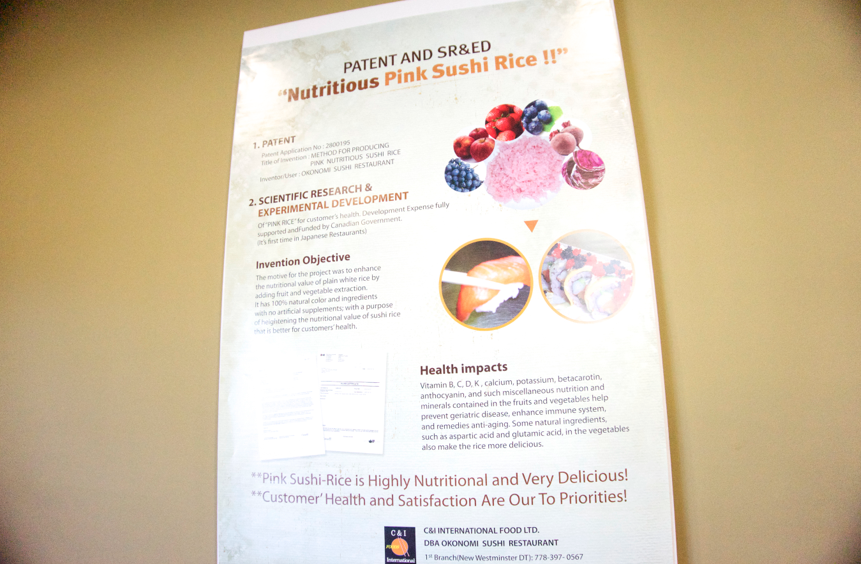 (Click to Enlarge)  Read all about their fancyy sushi technology here LOL!! 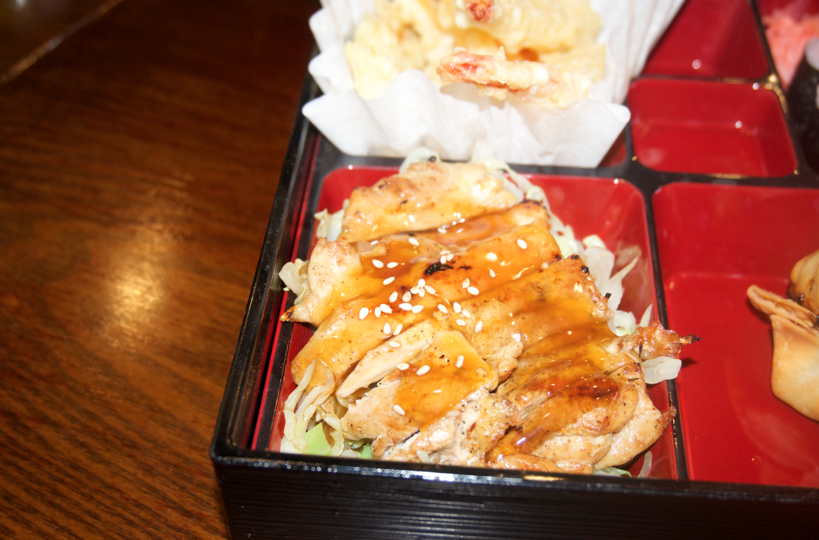 Since my dad had ordered the teriyaki beef, I got the chicken! This was actually quite good! Slightly charred at the corners, a bit smokey, and pretty tender! The teriyaki sauce they use isn't too overwhelming or overly sweet either! 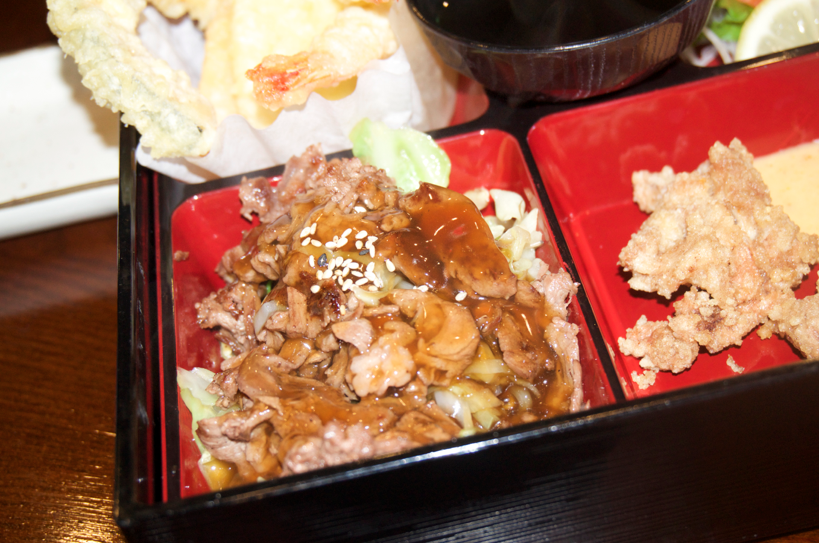 Teriyaki Beef
3/5 stars
My dad got the teriyaki beef, and like the chicken, quite solid. Semi tender, juicy, with just the right amount of sauce! The portion size was modest but it was more than enough! 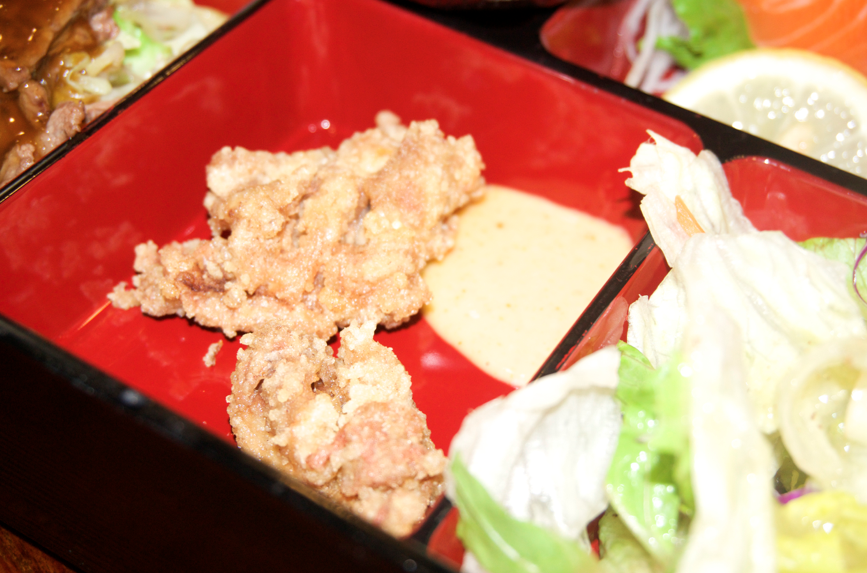 Chicken Kaarage
3.5/5 stars
For all their lunch bento boxes, you have the option to choose between gyozas, a udon or chicken kaarage as your side!
This was pretty good as well! The batter was very well executed, displaying a nice crunch and an airiness from a proper fry job! Despite only coming with two pieces, it was still really enjoyable! It also came with side of spicy mayo as a dip! 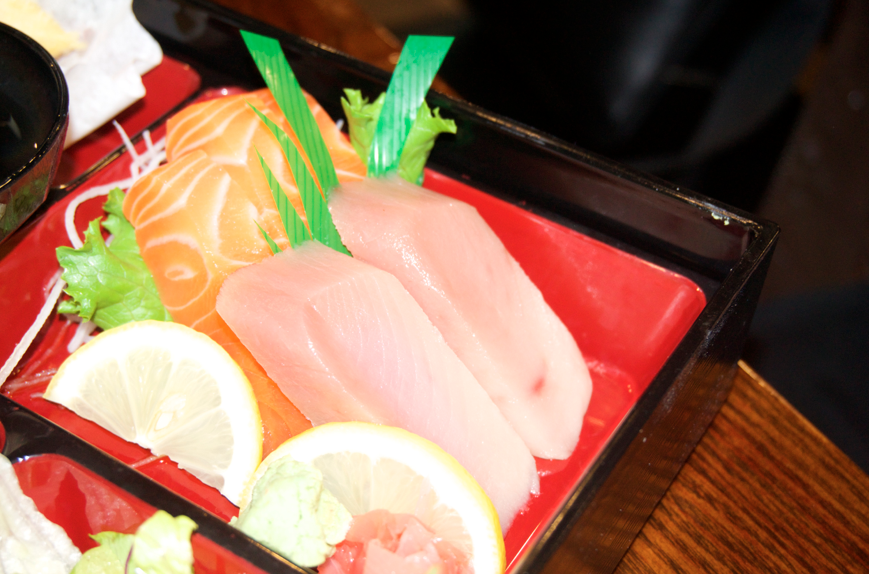 Tuna, Salmon Sashimi
4/5 stars
My dad really liked his sashimi! Both pieces of fish exhibited a healthy seen and tasted really fresh! The pieces were cut rather neatly and uniform in size! 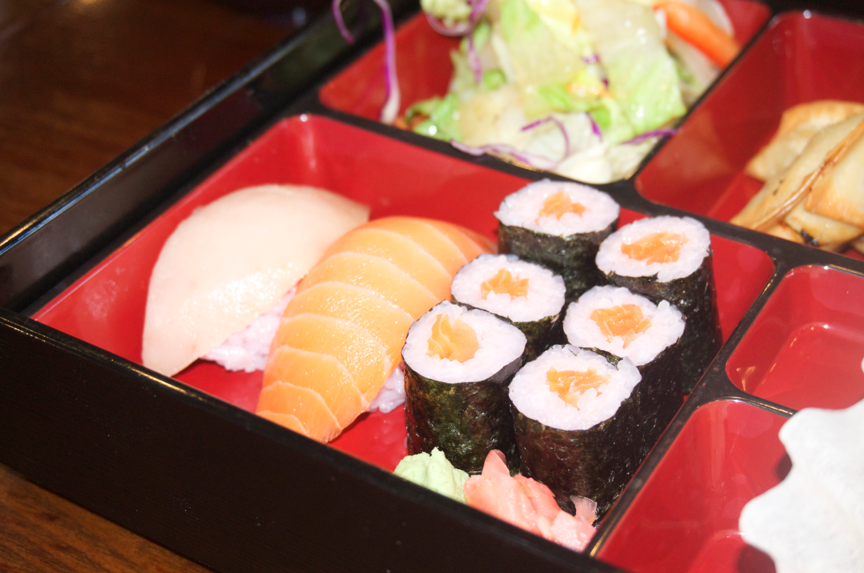 Now, let's talk about that pink sushi rice haha! Health benefits aside, it actually tastes really good! It's a bit sweet, a bit vinegary, and you can really taste the vegetables (especially the beets) haha! Definitely jazzes up your boring sushi rolls with a little something extraa!
As for the maki and nigiri, both exhibited healthy, generous cuts of fish! No complaints really and the pink sushi rice definitely made it super fun to eat! 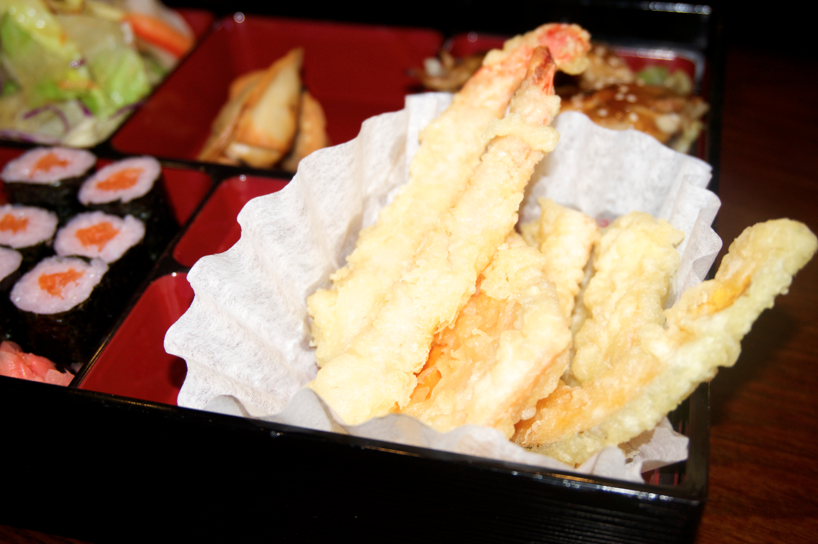 Tempura
2/5 stars
The tempura was the only disappointing item out of the bunch! The batter wasn't airy enough. Not thick by any means but certainly not thin either. The prawns did exhibit a nice snap and the vegetables pieces were sliced rather thick. 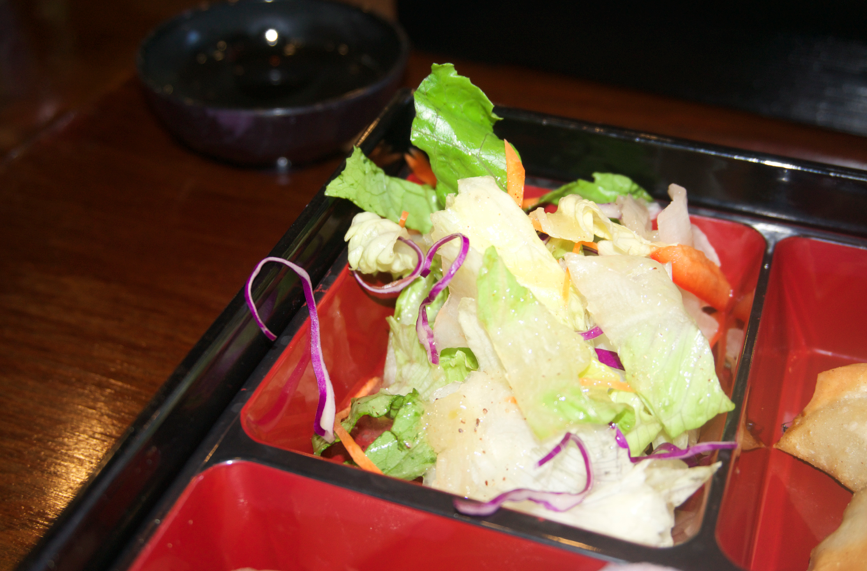 Salad
2/5 stars
The salad was standard, they just used prepackaged garden salad, which was dressed in a ginger vinaigrette! Light and healthy tasting lol. 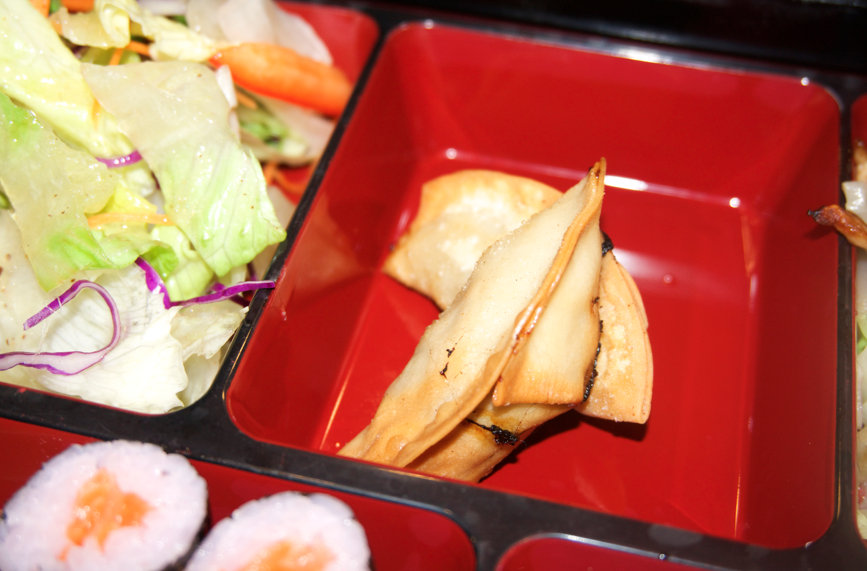 Gyoza
2/5 stars
The gyozas were okay, they're the frozen ones that come out of a packet! The skin was a a bit too doughy and the outside was overly crispy, and a bit burt at the edges. 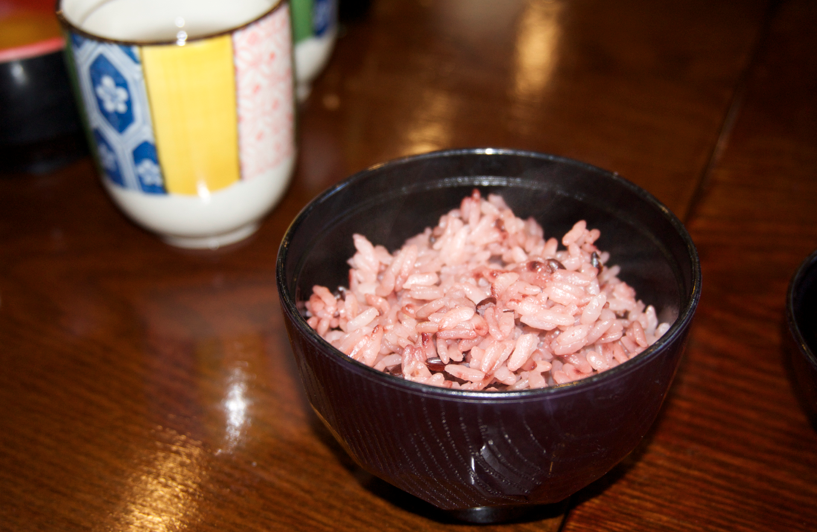 Rice!
Both our combos also came with rice, and I was surprised that they gave us purple rice! Hey, that stuff is expensive and usually no restaurants offer it! My dad was pretty impressed LOL! 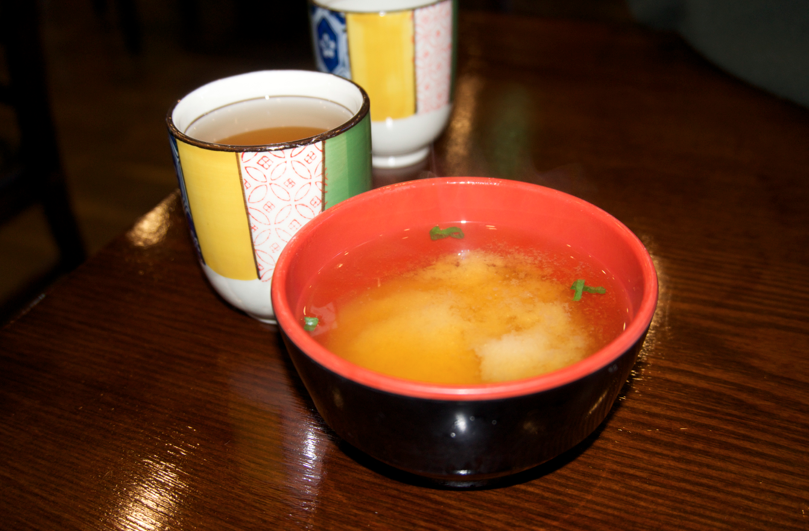 Miso Soup
1.5/5 stars
The miso soup was pretty salty and there wasn't any seaweed or tofu chunks in it. But it came in the bento box so it's all good! :)