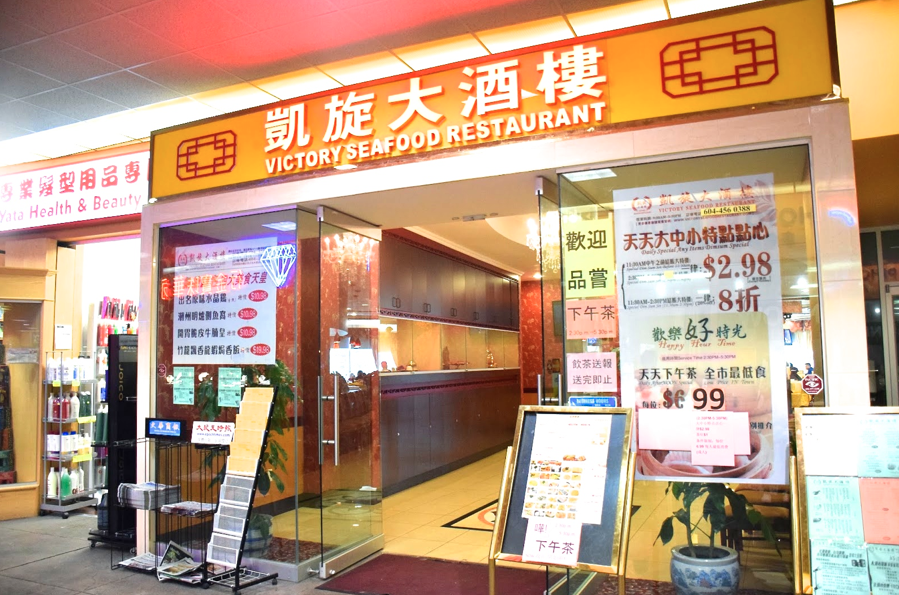 By now you guys have probably realized that my dad and I go for dim sum 1-3 times a week LOL. We're all about dat yum cha life heheh. Hey, we're Cantonese, can you blame us? And yes, shrimp cheung fun, pai go fan and egg tarts have now become staples in my diet ;)

We go to the same places so much that I don't even bother blogging about it lol. My mom always gives him a hard time "Why do you always go to the same restaurants if you're going to spend the same amount of money, Selina can't blog about it!"  Exactly!! Well said Mom LOL! ;)  And my dad was like "I don't care about your blog Selina, I care about getting the best value for my money!!" ...

We've been frequenting Victory Seafood Restaurant for the past 2 years, way before I started blogging! Back then I really liked Victory, but I was young and naive, and didn't know what good dim sum was LOL...so now I find it mediocre.

But Victory has really stepped up their game lately because both my dad and I noticed a change in the quality and taste of their dishes! A few months back I would have rated Victory 2/5 stars (and that's being generous) but today's meal warrants a 3/5, which I definitely wasn't expecting! Maybe there was a change in management or the chefs?

My dad likes Victory because if you order before 12 pm, most of the dishes are 20% off! So today we managed to order 6 dishes with the bill coming to $23 after taxes, which made him really happy  haha! The place is usually packed, even on weekdays (probably because of the location.) Service is really bad though...the food takes forever to come and it's a chore trying to flag down the waitresses!

You can read my previous review about Victory here: http://www.vancitynoms.com/2014/06/victory-seafood-restaurant-crystal-mall.html 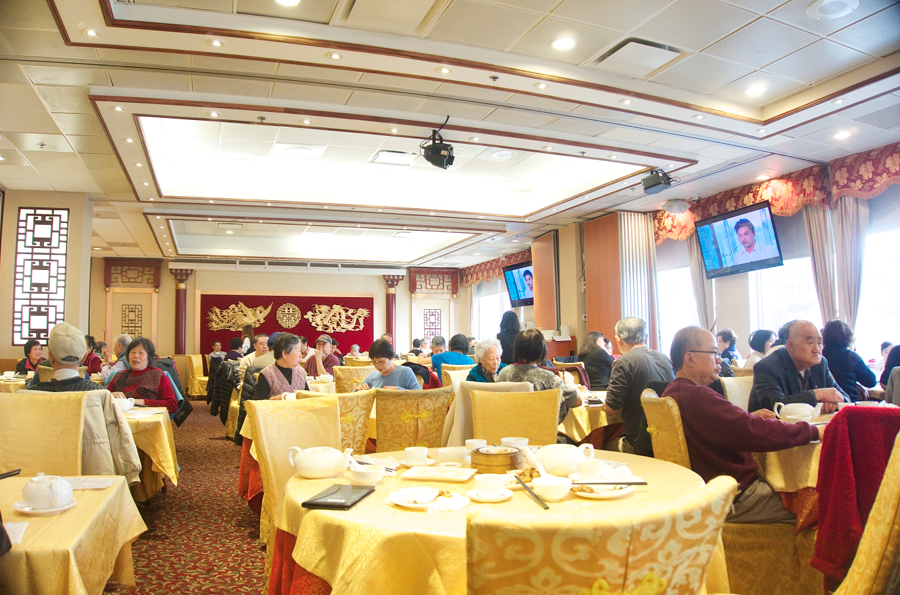 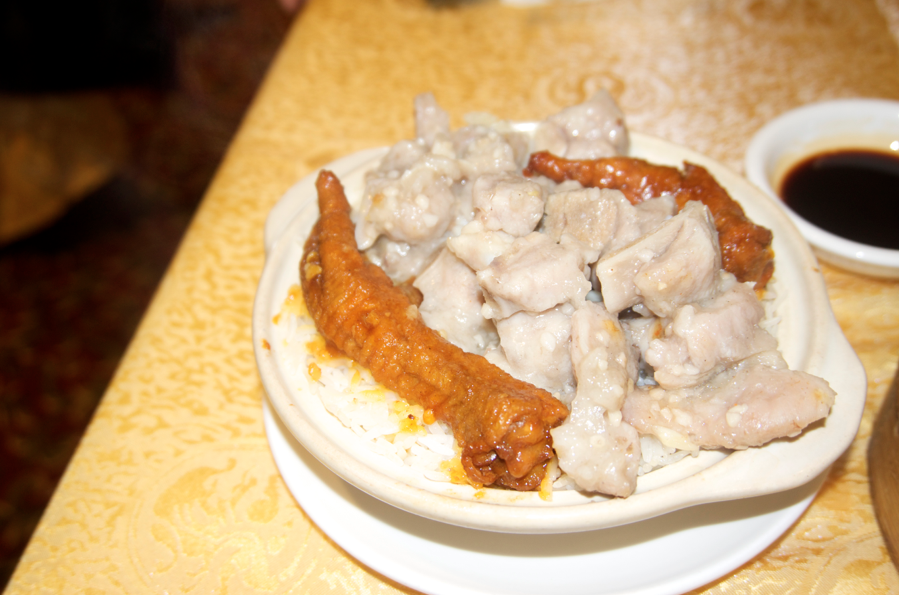 Spareribs & Chicken Feet Claypot
2/5 stars
This was probably my least favourite out of everything we had, but it was still a decent version of pa goh fan! There was a ton of tender spareribs (which my dad loved) and 2 pieces of fon zhao. I found the rice to be a little too wet in texture though, a good spareribs clay pot should be able to hold the moisture of the meat without getting soggy. 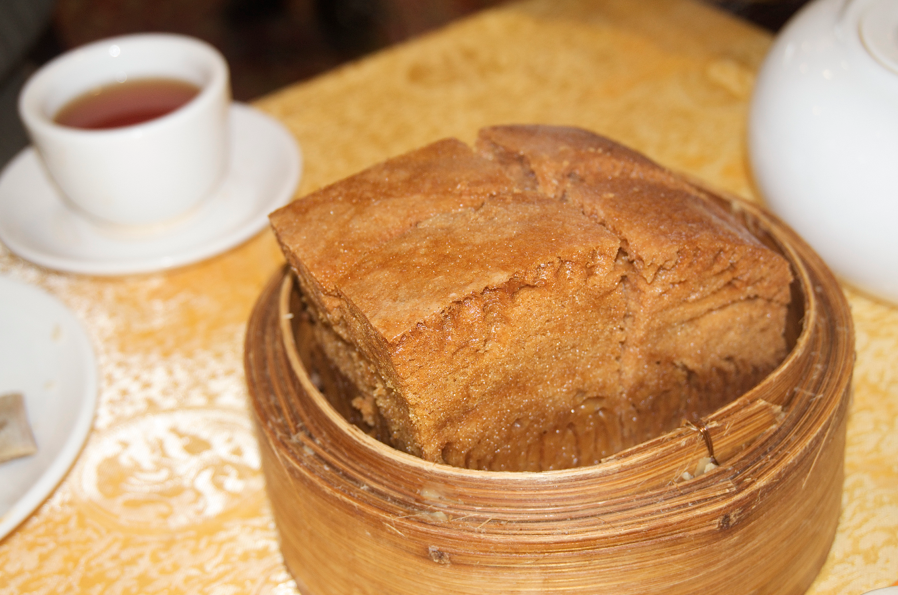 Steamed Ma Loh Gah w/ Chicken Oil
3/5 stars
This was my fave! I really liked Victory's version because they used chicken oil in it, not a lot of places do! The cake itself was moist, but it could have been fluffier. Taste wise, there was strong brown sugar taste and an underlying chicken oil taste! 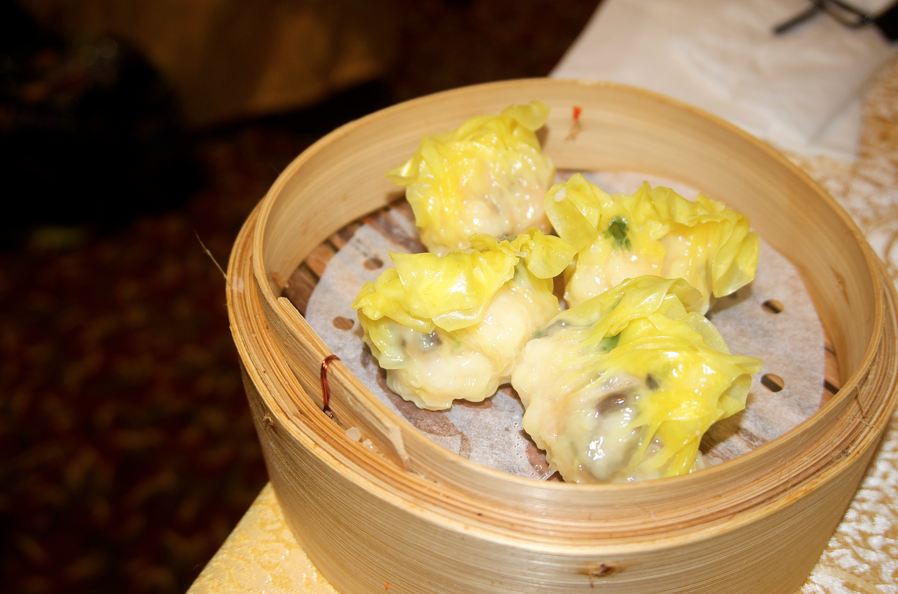 Steamed Shrimp & Leek Dumpling
3/5 stars
This sounded simple of the menu, it was really good! Probably my favourite thing, after the mah lo goh! The wrappers were thin and elastic, and the inside was filled with fragrant bouncy pieces of shrimp, along with some woodiness from the mushrooms and flavour from the leeks! 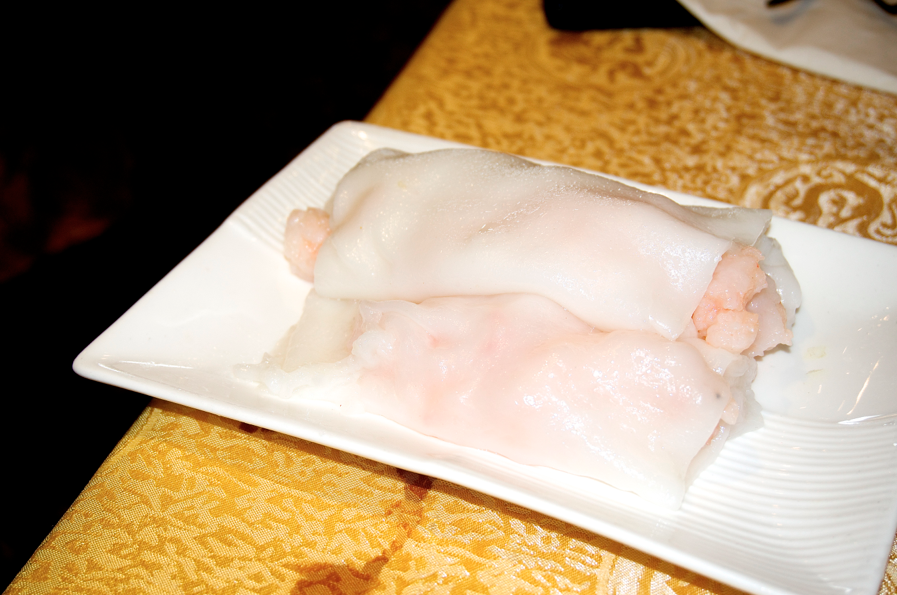 Rice Roll w/ Supreme Fresh Shrimp
2.5/5 stars
This was a decent version! The rice rolls was soft, but was a little bit too thin for my liking. The shrimp pieces were plentiful though and bouncy! 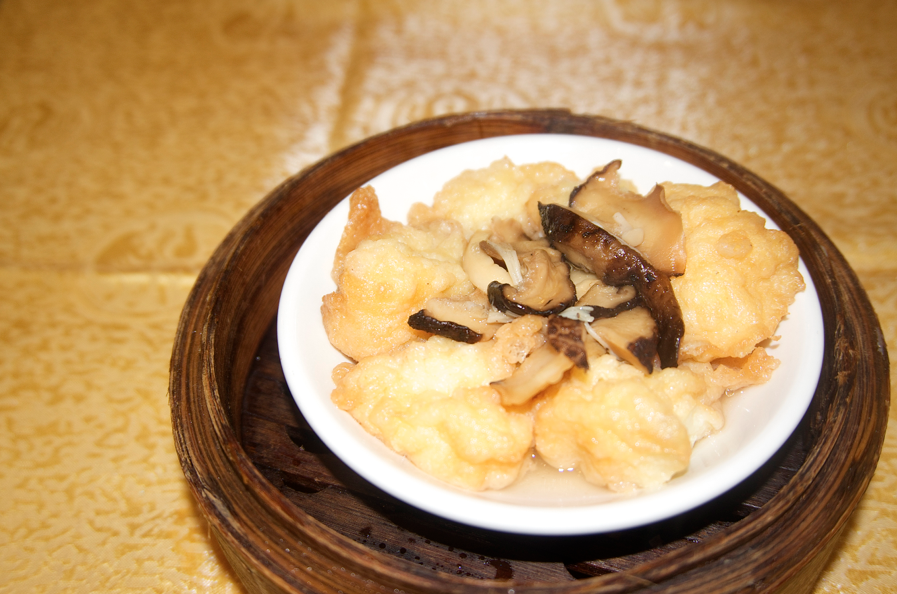 Steamed Mushroom & Fish Tofu
2.5/5 stars
Another dish that was totally unexpected! The tofu wasn't filled with fish paste/balls, rather, the tofu itself was made out of fish! I'm not too keen on steamed tofu in general but I really liked this! The tofu had a strong fish paste flavour, and the mushrooms helped add a touch of woodiness. 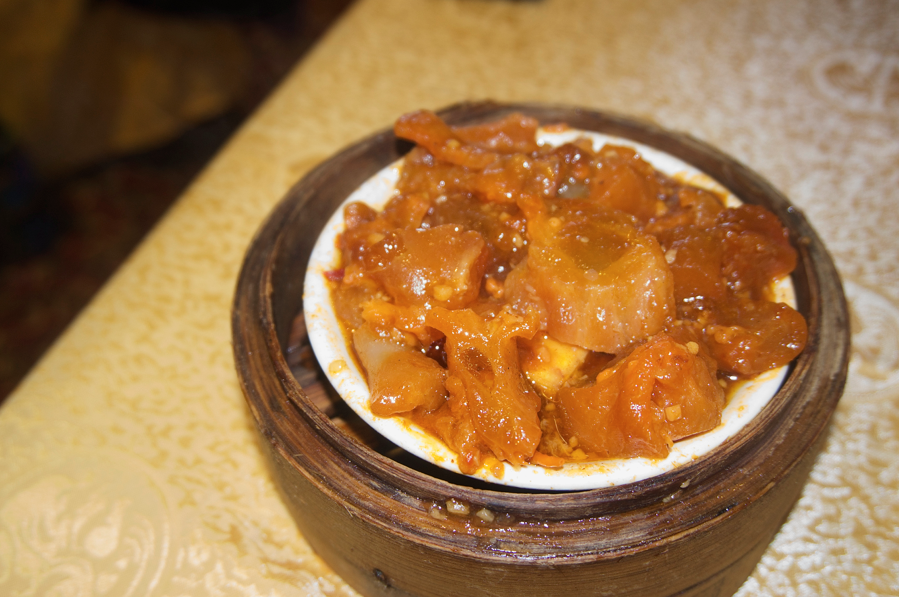 Steamed Beef Tendon
2/5 stars
Another decent offering, not bad, but better executed elsewhere! The portion size was really large though, larger than most dim sum places! The beef tendon was moist, chewy, and well seasoned with the addition of garlic. 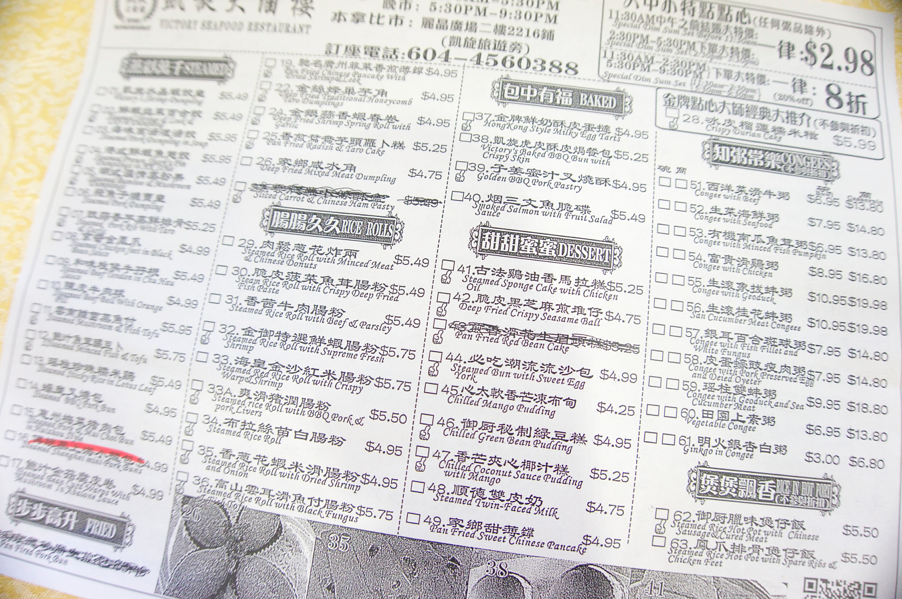 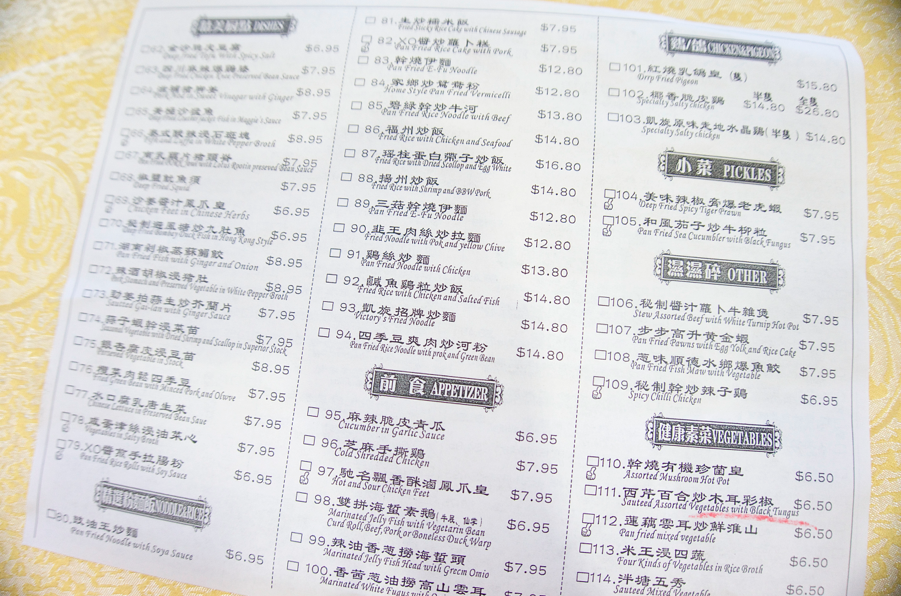