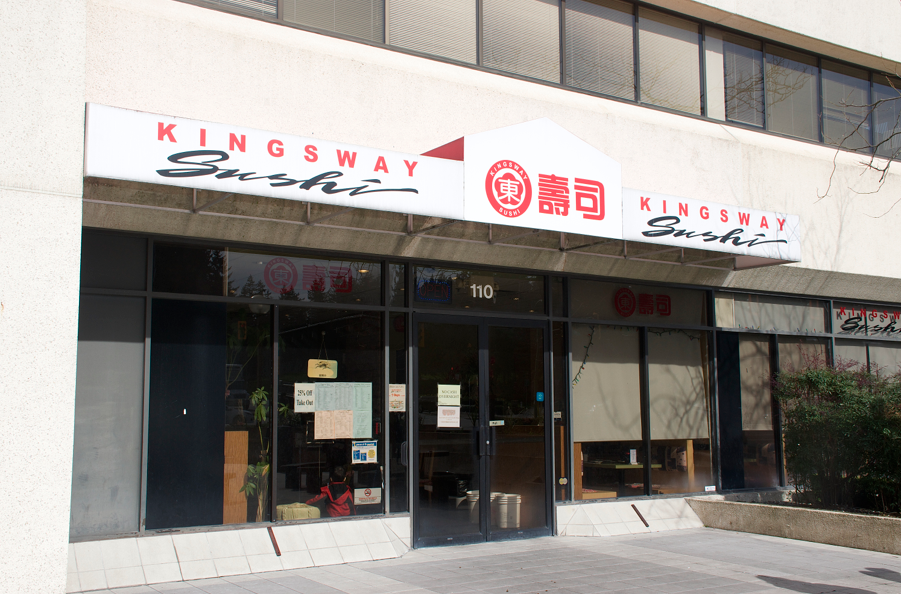 I have a confession to make...I use to go for AYCE sushi all the time in high school LOL. *hangs head in shame* Hey can you blame me? I was young, naive, and hungry ;)

Now I'm a few years wiser, not AS naive, but still HUNGRYY harhar and still willing to do stupid things...like take on AYCE.

There's just something so satisfying and wonderfully nostalgic about stuffing myself with mediocre sushi rolls and mysterious fried substances LOL. Brings back memories of high school where the only thing I would look forward to after a long day at school would be a mama burger and soggy tempura at Sui Sha Yah. Yes, Sui Sha Yah. Yes, I use to go there. Hey, I didn't know any better!! ;)

So I decided to relive my (not so) glory days and venture back into the land of AYCE sushi. My dad's pretty much a fan of anything ayce, so when I suggested this place he was all for it!

Kingsway Sushi is part of the Top Gun group of restaurants that runs Richmond Sushi, Top Gun Hot Pot, and Top Gun Dim Sum. If you register for one of their membership cards you get 20% off each visit, but there's an annual $20 fee. So unless you're planning to visit a couple times a month, it's probably not worth the money!

Kingsway Sushi is Chinese run, but according to inside source and resident sushi expert @missvancouverpiggy (Hi Emily!) Kingsway Sushi (and their sister restaurant Richmond Sushi) has some of the freshest sashimi in town!! :D 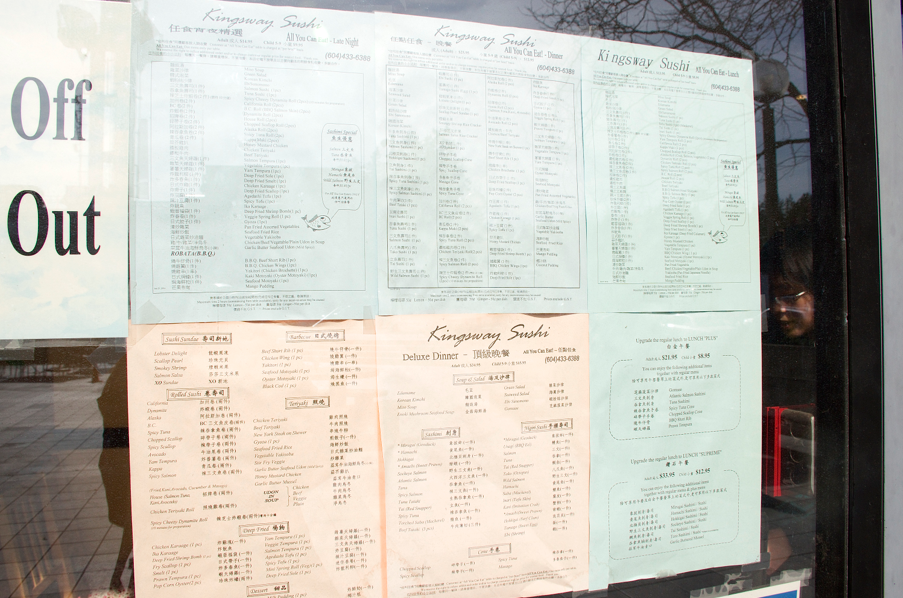 (Click to Enlarge) They have a lot of variations of their AYCE, there's the regular ayce Lunch, Lunch Plus, Deluxe Lunch, ayce Dinner, and Deluxe Dinner! We decided to got with the regular ayce lunch, which doesn't include sashimi! 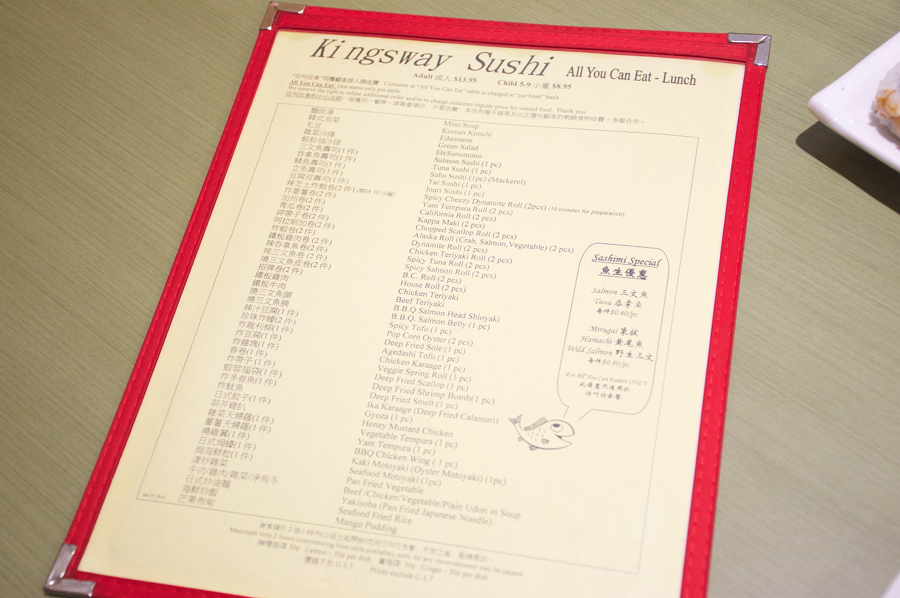 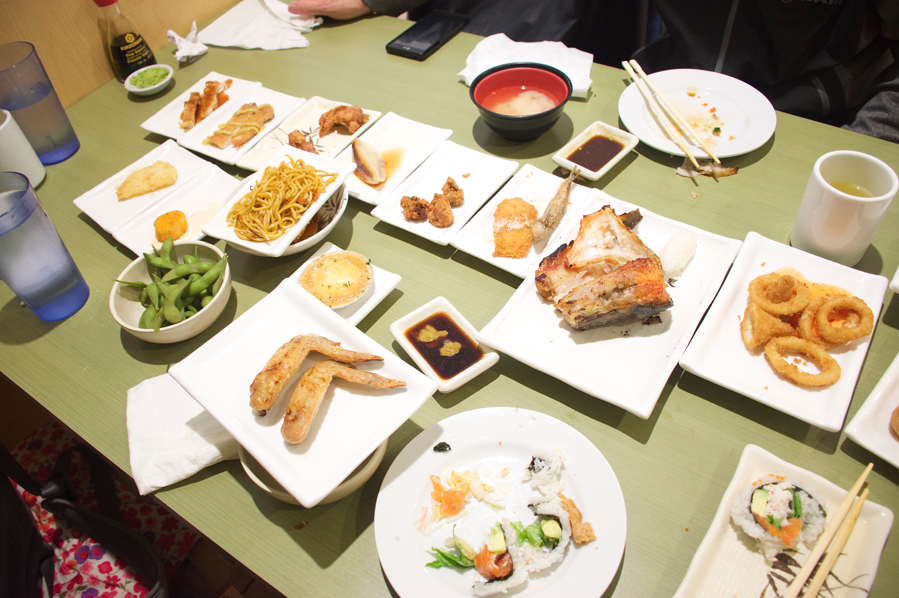 Nothing like AYCE to get your blood pumping!!
It's my drug of choice ;) 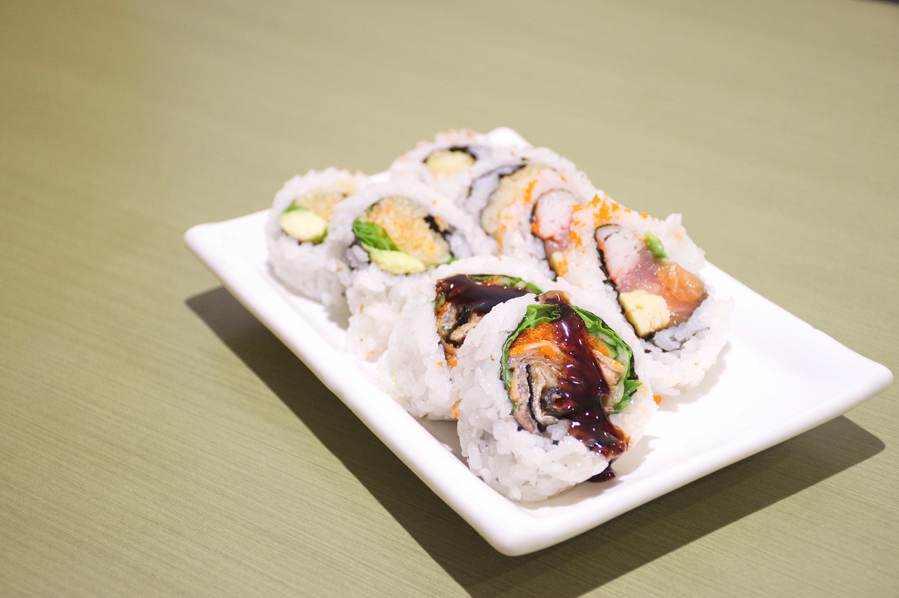 BC Roll, House Roll
BC: 3/5 stars
House: 2/5 stars
The BC roll wasn't half bad!! There was a lot of filling and barely any rice! The salmon skin was crunchy, and there was an adequate amount of veggies. The sweet soy sauce glaze was generic tasting, which isn't necessarily a bad thing.
The house roll had salmon, tam ago, tuna, imitation crab, and avocado in it! Pretty standard, but not offensive either. 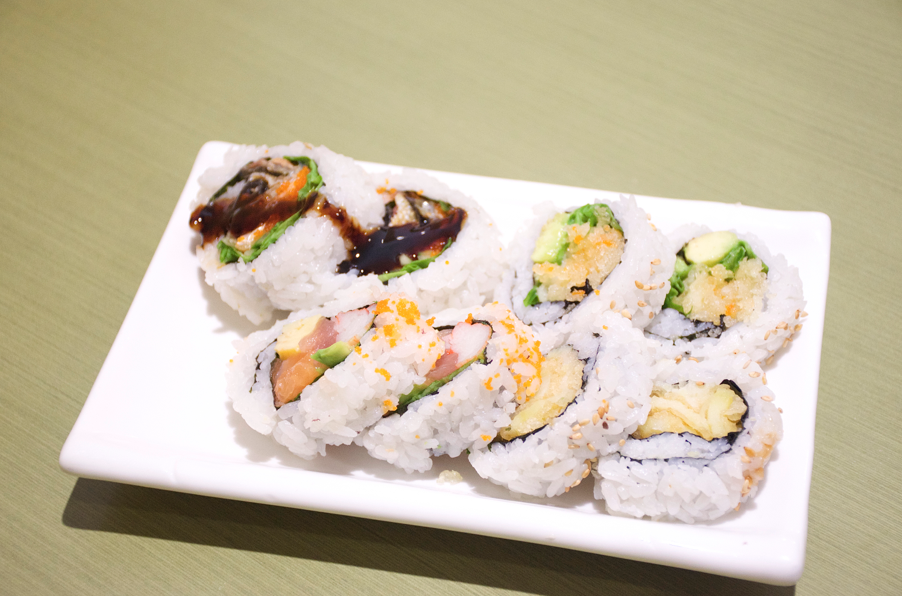 Yam Tempura Roll, Dynamite Roll
2.5/5 stars
Both rolls had yam tempura in it, and everything tasted pretty predictable. The tempura batter wasn't too heavy or greasy, which I liked. The rice wasn't too wet or dry, and didn't fall apart. 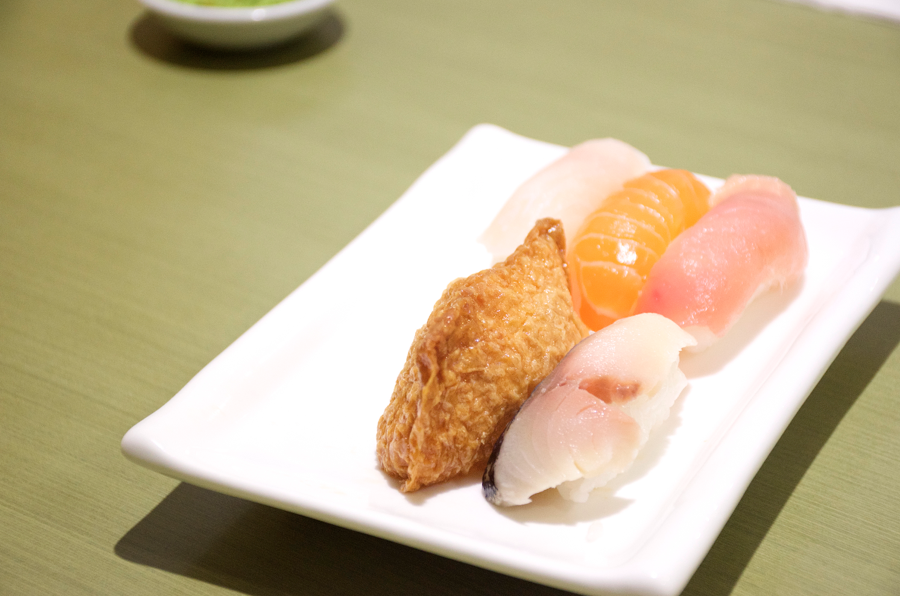 Inari, Saba Nigiri
2.5/5 stars
The inari was pretty decent, the bean curd roll wasn't dry and it was well flavoured without being overly sweet. The saba tasted fresh and looked reasonably healthy. I liked how little rice they put in the nigiri, so you won't get full from just eating rice! 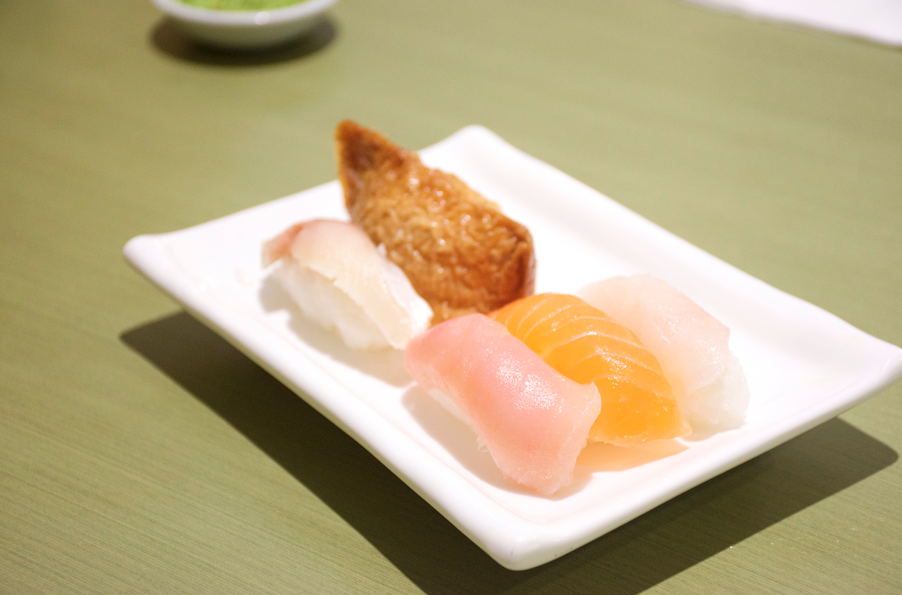 Tuna, Salmon, Tai Nigiri
3/5 stars
The cuts of fish had a healthy sheen and this was confirmed by its fresh taste! I wish I had ordered more nigiri but we already had too much food on the table LOL. 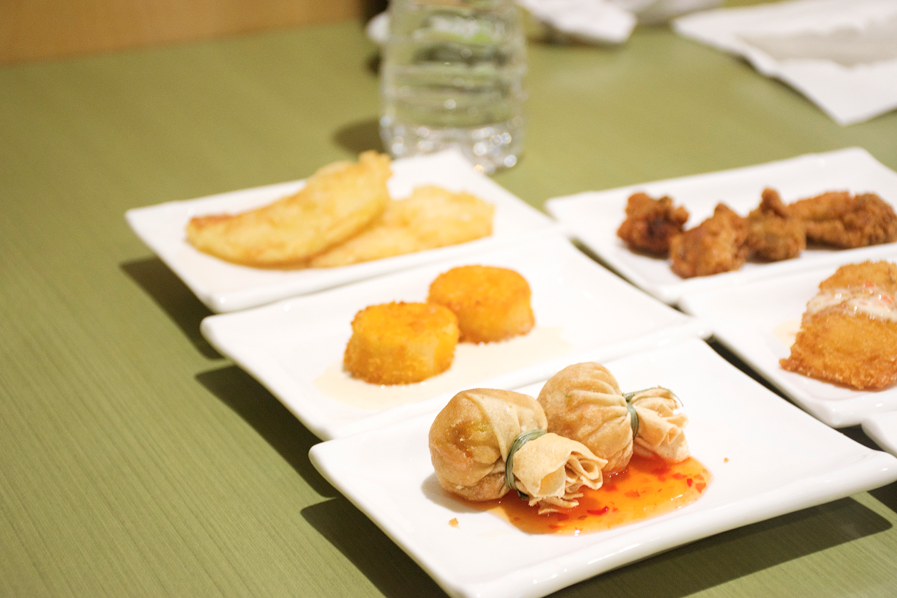 Fried Shrimp Bomb
1.5/5 stars
The shrimp bomb was basically a shrimp ball, wrapped in a wonton wrapper! The sweet and sour sauce wasn't really necessary, because the shrimp was already flavoured on its own. 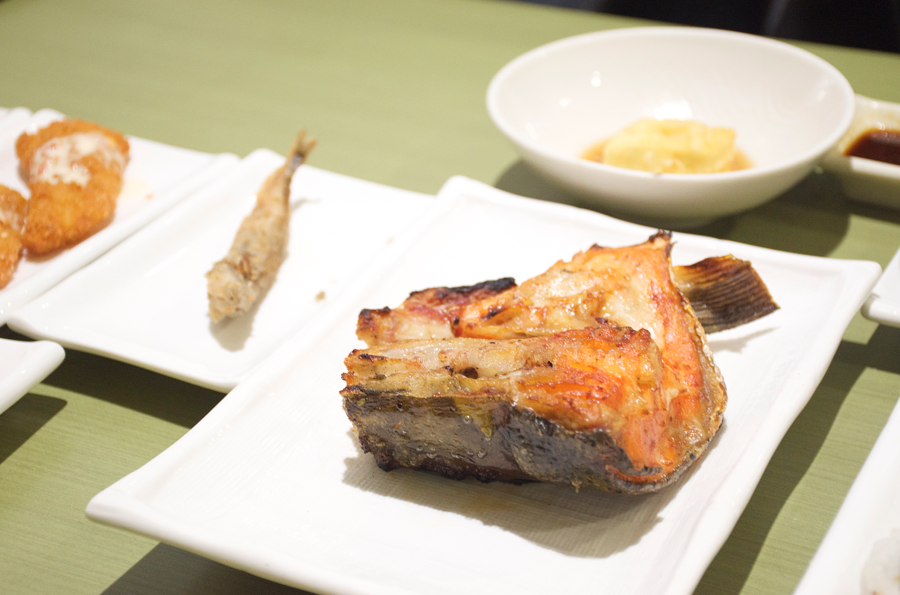 Salmon Head
2/5 stars
This was quite a large piece! It had a thick, crispy exterior, and the inside was reasonably moist and semi flaky. It wasn't seasoned very well though so some added salt would definitely help! 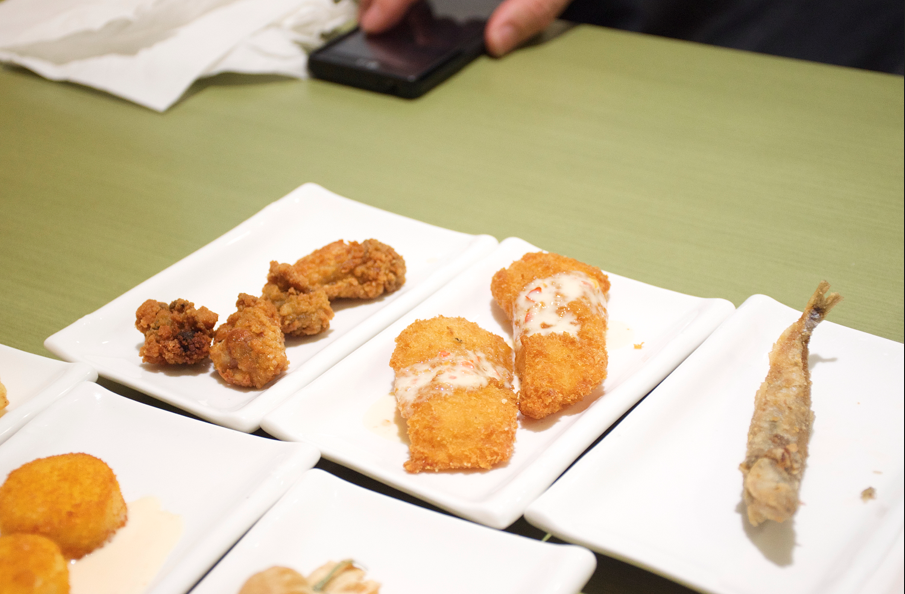 Deep Fried Sole
2/5 stars
The batter on this had a katsu like breading, it was reasonably crunchy, and not laid on too thick! The sauce on top just tasted like a watered down version of salad dressing, which I found kind of odd. 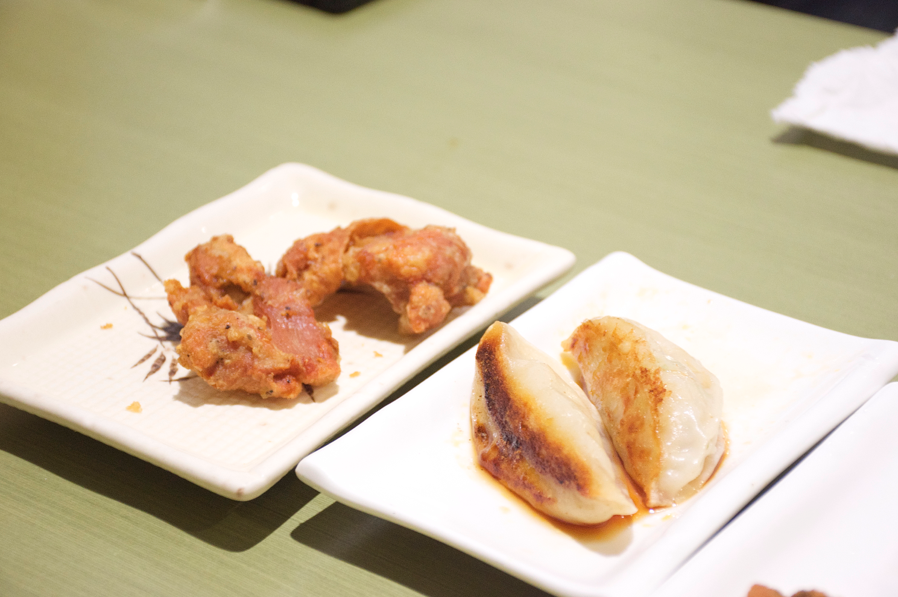 Gyoza
Gyoza: 1.5/5 stars
The gyozas are your typical prepackaged ones from T&T, but they came sitting in a pre dosed vinegar sauce which was nice! 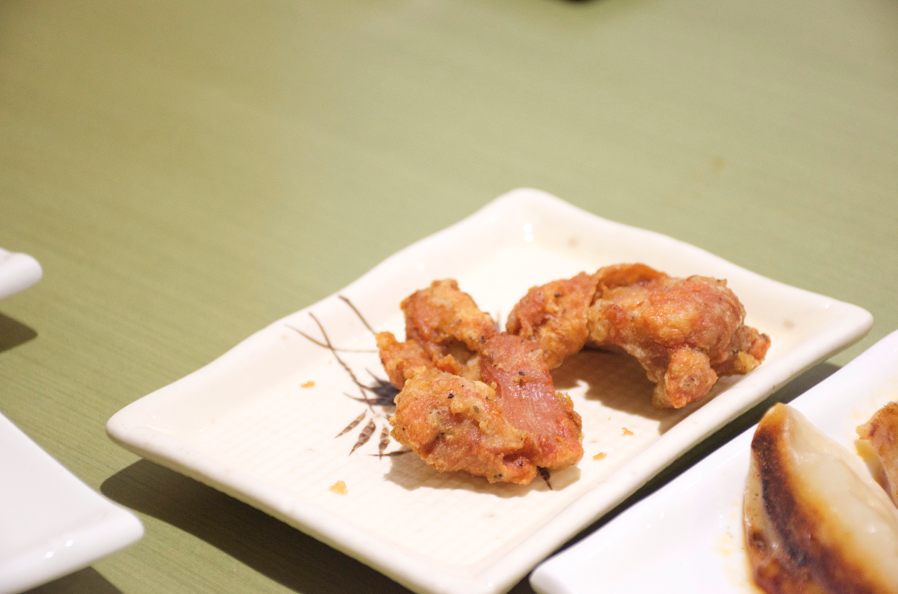 Chicken Kaarage
1/5 stars
The chicken pieces came out hard, and I didn't like how the batter was too thick, which made it difficult to chew haha. 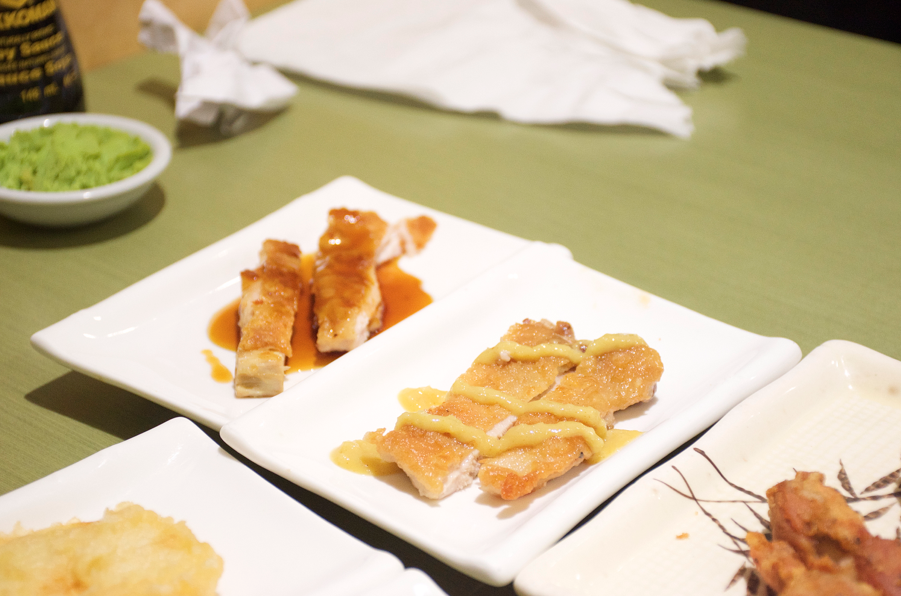 Mustard Chicken & Teriyaki Chicken
2/5 stars
The chicken strips were pretty tender, with a thin layer of fried skin on top. The teriyaki sauce was your generic tasting teriyaki, so it was enjoyable haha. The mustard was basically a mustard/mayo concoction! 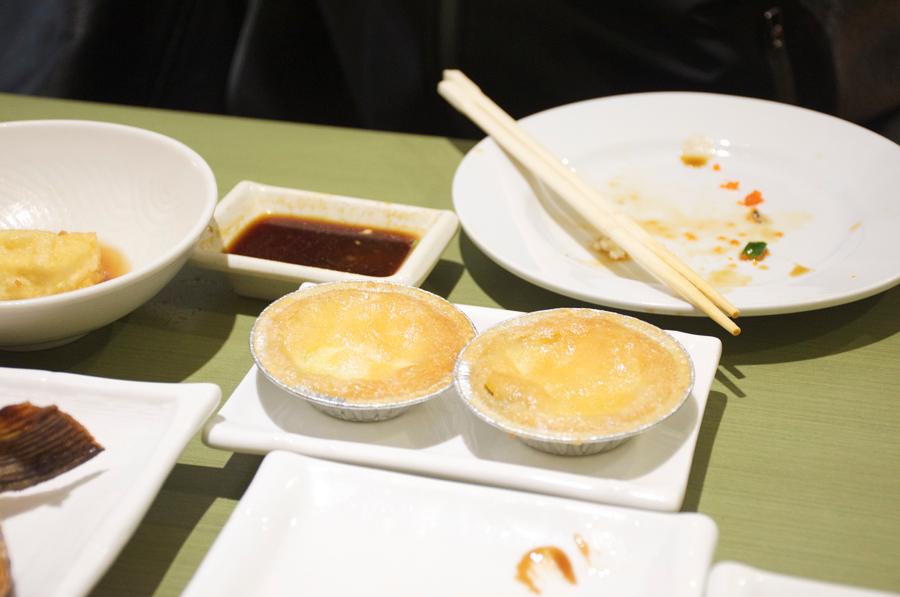 Oyster Motoyaki
2.5/5 stars
The oyster motoyaki came out in little egg tart tins. The outside was crust, and the inside was soft. It was a touch under baked but it wasn't that big of a deal. It had a few bits of oyster inside! 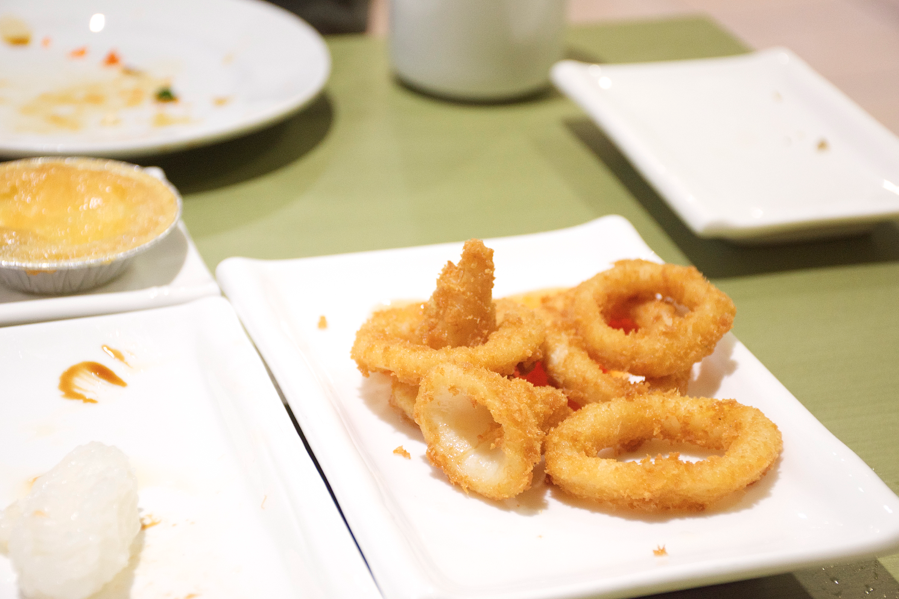 Ika Kaarage
2.5/5 stars
I tried a bit of the ika on its own, and I prefer it without the sweet and sour sauce because it overwhelms the taste of the batter. The batter they use is the kind they use for katsu, so it's light and not laid on too thick. 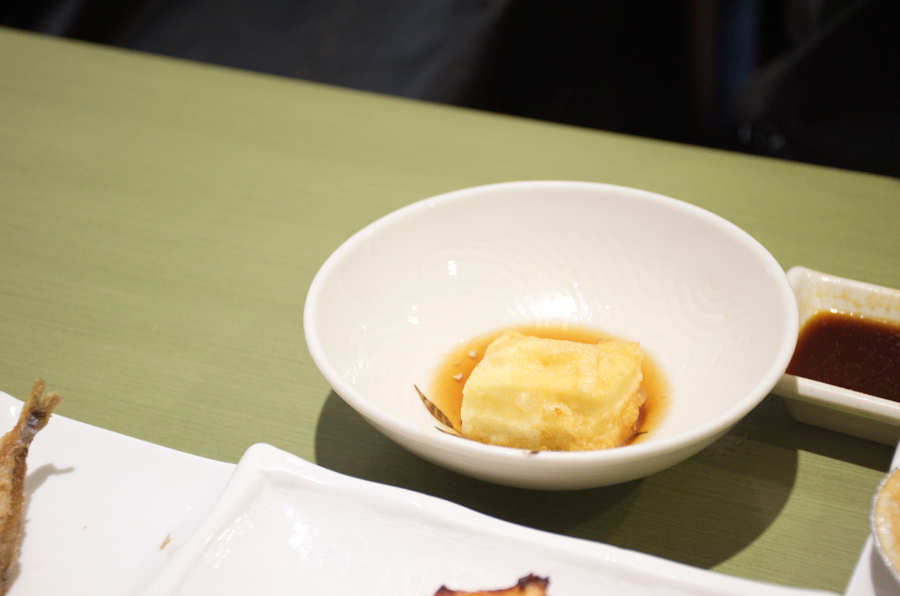 Agedashi Tofu
1/5 stars
The tofu looked really soggy, and it tasted soggy too haha. It wasn't crispy enough and the sauce just made it even wetter. The sauce tasted pretty diluted and not that great. 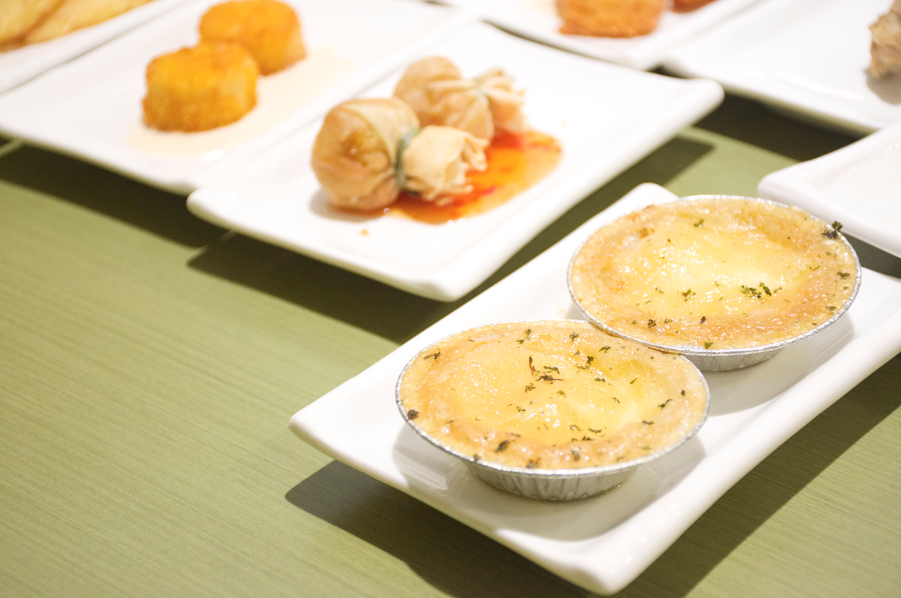 Seafood Motoyaki
2/5 stars
The seafood version, which had bits of salmon in it! These were creamy, and were baked more evenly! 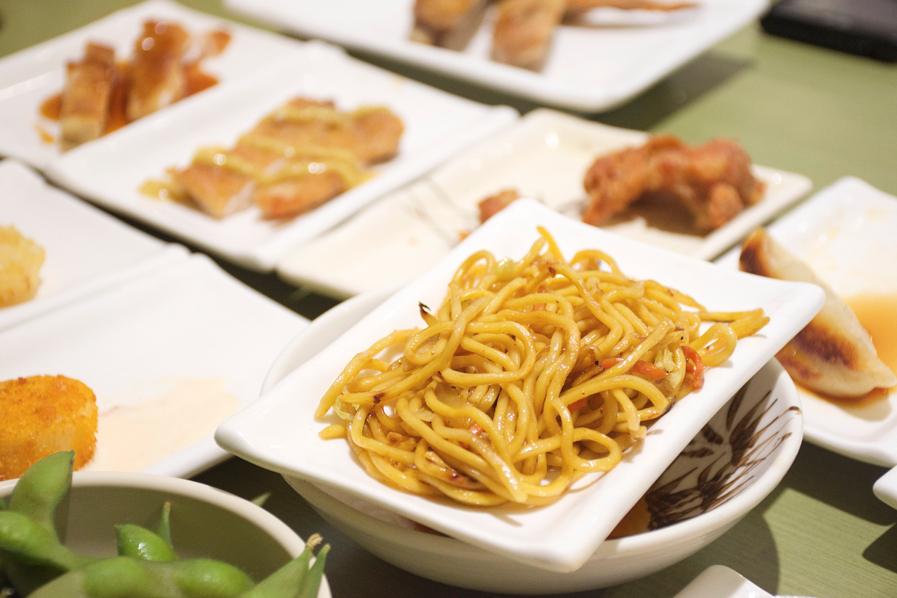 Yakisoba
2/5 stars
The yakisoba was okay, the noodles were semi-al dente and didn't stick together. I could even pick up a bit of wok hey! 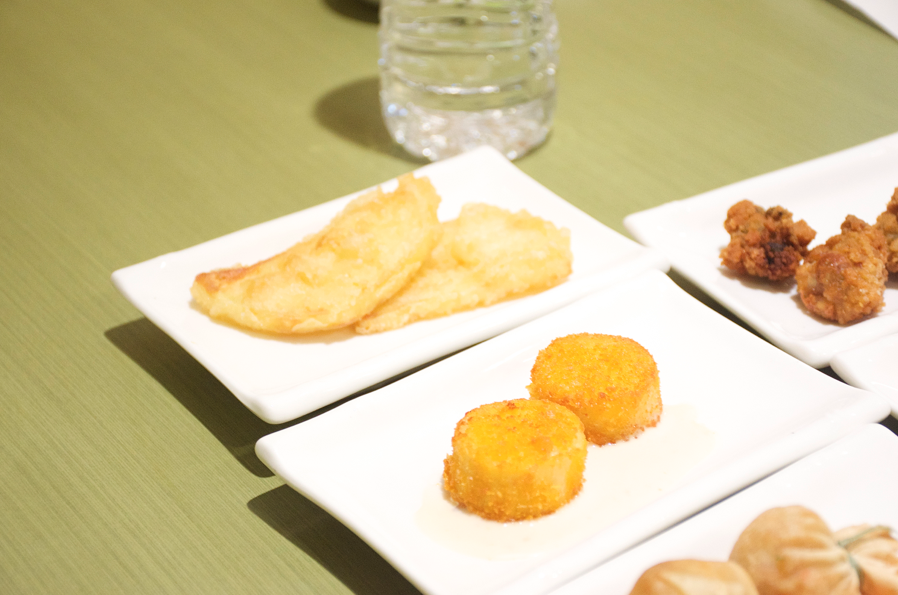 Scallops & Yam Tempura
Scallops: 1.5/5 stars
Tempura: 1/5 stars
The scallops were decent, soft on the inside, with a light katsu breading. The tempura was a fail though haha. The batter was just too thick, doughy and not airy enough! 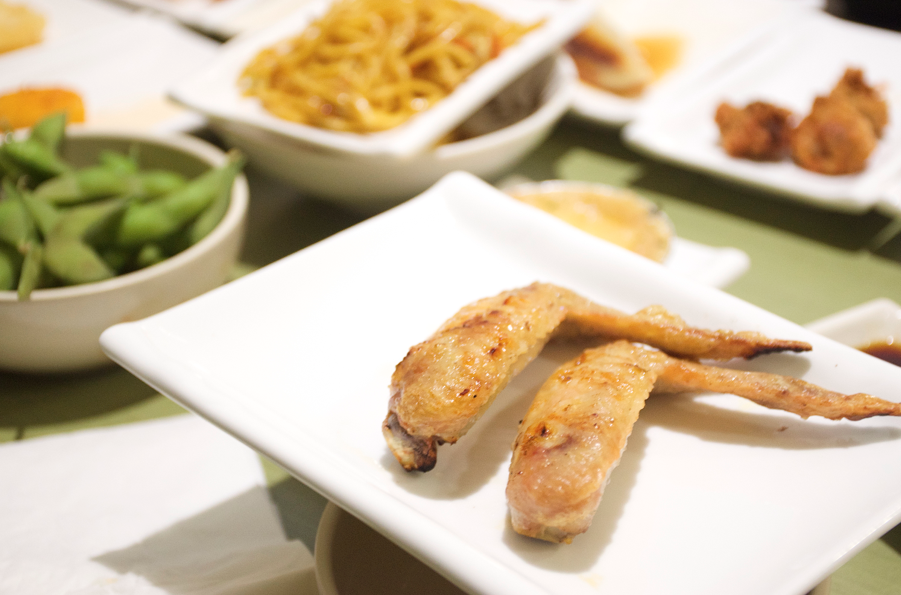 Chicken Wings
2/5 stars
These ones were decent, the wings were juicy, with a light charring on the outside, and lightly seasoned with some salt! 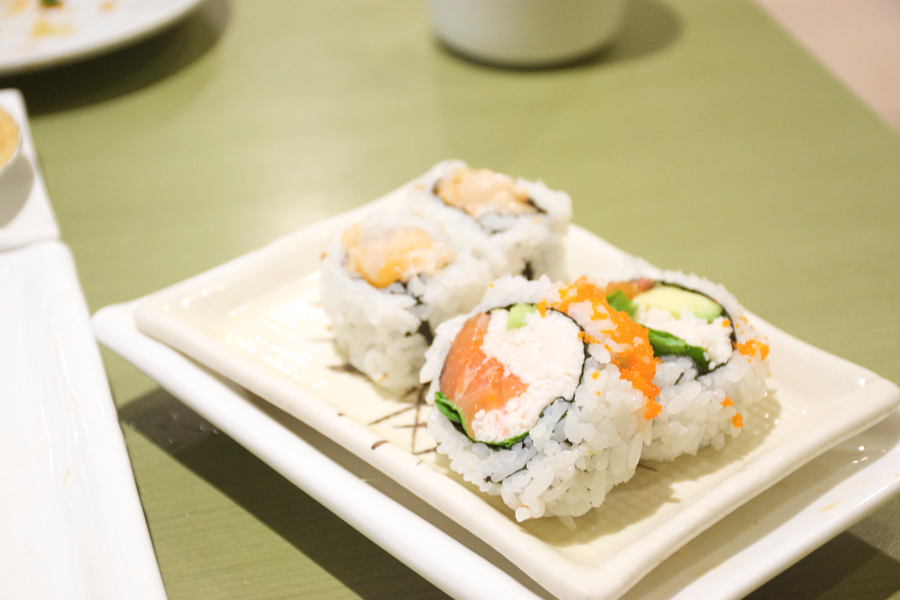 Alaska Roll
2/5 stars
Another standard roll, nothing out of the ordinary! I do like how there was lots of fish roe on it though! :) 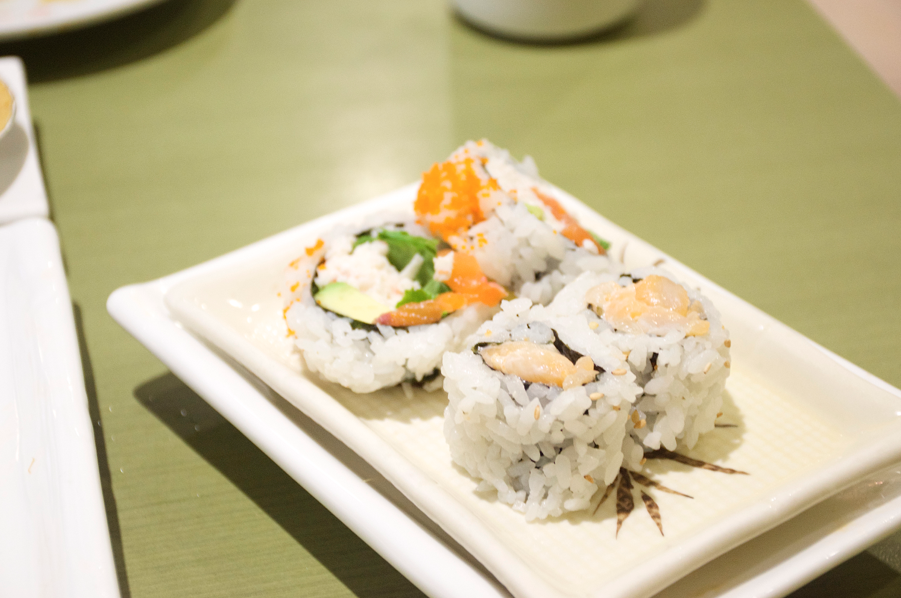 Chopped Scallop Roll
2.5/5 stars
The mayo to scallop ratio was pretty good, so you could taste the mayo as well as the scallop. There wasn't a lot of rice either! 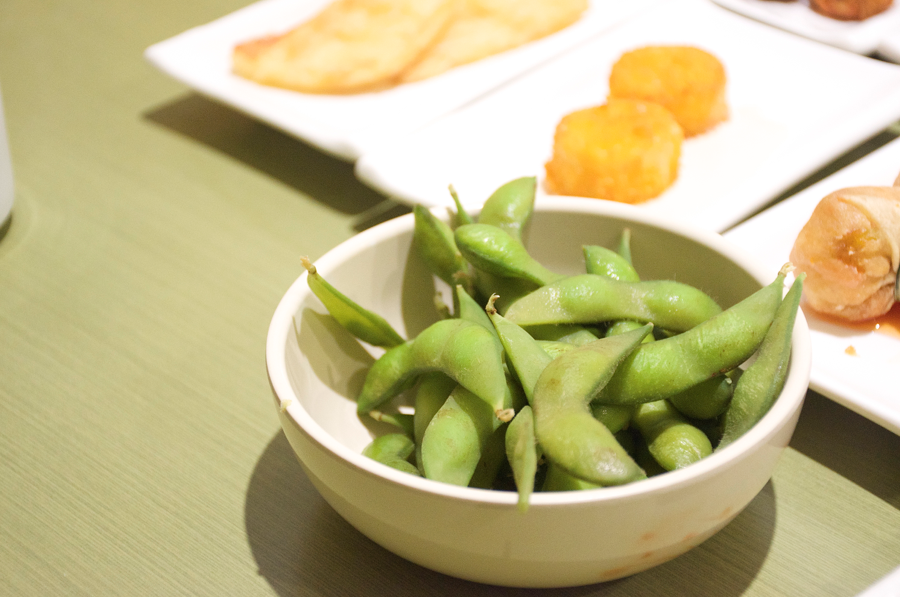 Edameme
3/5 stars
Something healthy to balance out all that fried stuff LOL. These ones weren't seasoned, but they were still pretty good, a good filler/palate cleanser in between plates! 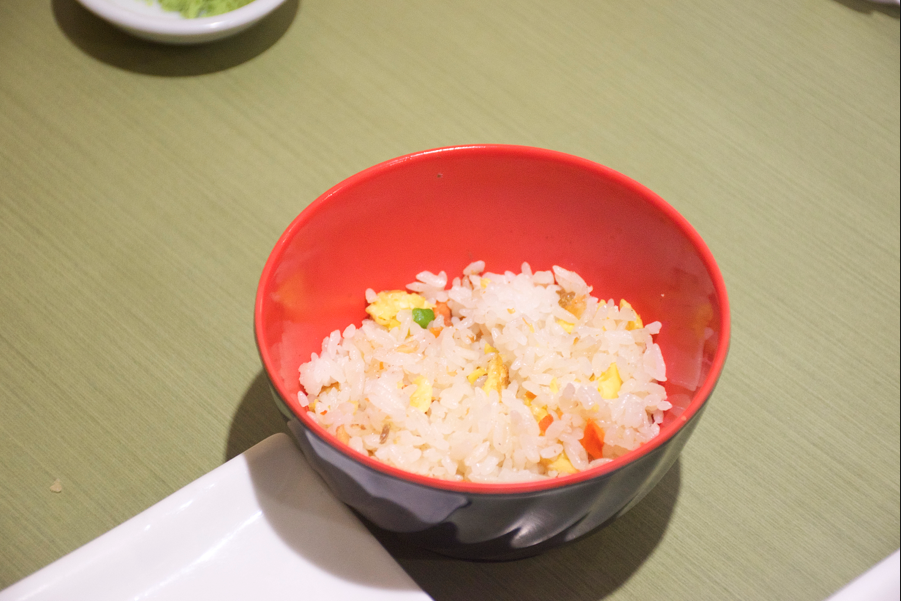 Seafood Fried Rice
1.5/5 stars
I ordered this just cause I was curious what their fried rice would taste like haha! They use sushi rice, so the rice isn't as fluffy, and it kind of sticks together! But it had eggs, green onion, carrots, and bits of salmon in it!