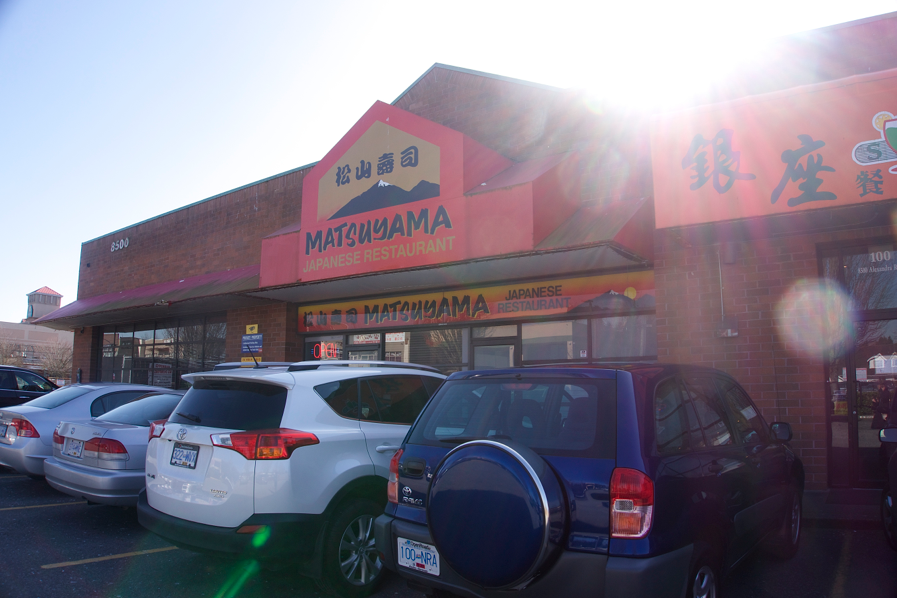 To my utter shock, my dad agreed to go somewhere other than South Ocean for lunch yesterday LOL. Hey, it doesn't happen that often when we're in Richmond!!

My dad's a really weird guy. If we're eating out and he's paying, he'll only be content with eating:

A. Dim Sum (being his top choice! Hey, can you blame him? He's a typical middle aged Cantonese man lol!)
B. Japanese food (or bento boxes to be specific LOL)
C. Chinese food
D. Pho (Preferably at Pho Hong)

We actually had dim sum at South Ocean yesterday, but considering how much he loves that place, it wouldn't come as much of a surprise if he decided to take me there again today!!
But thankfully he had a change of mind, and we agreed on going to Matsuyama on Alexandra Road!! The fact that I mentioned "bento boxes" sold him LOL!

If you're going to go to Matsuyama your best bet would be to go in the evening after 9 pm, when they have their late night specials!! Nigiri starts at 99 cents, and they have a ton of rolls/cooked items under $5!! But don't blame me if you gain a few pounds ;)
I am by no means condoning late night eating ;) 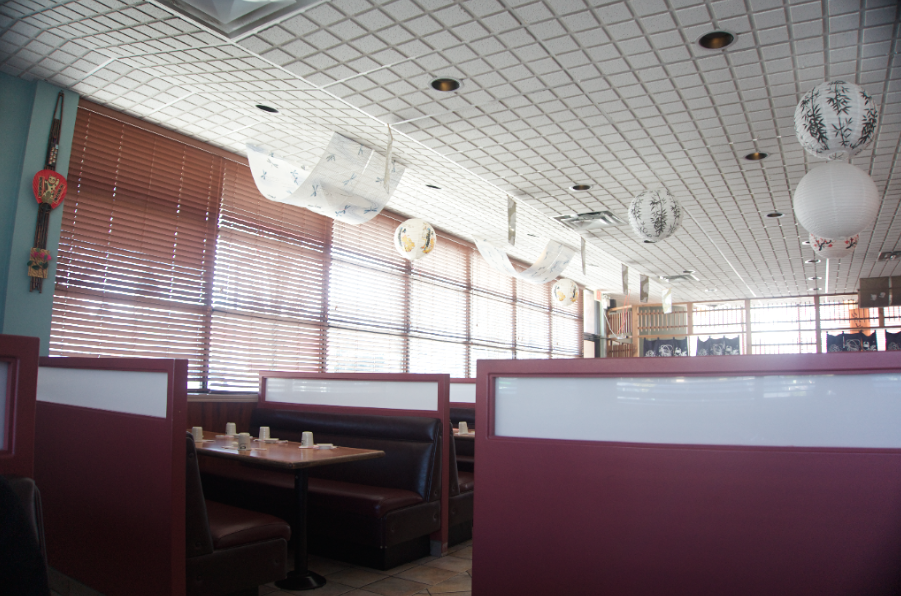 Sectioned off booths for privacy!! Great for inconspicuous picture taking, so I can take as many pictures as I want without getting judged LOL 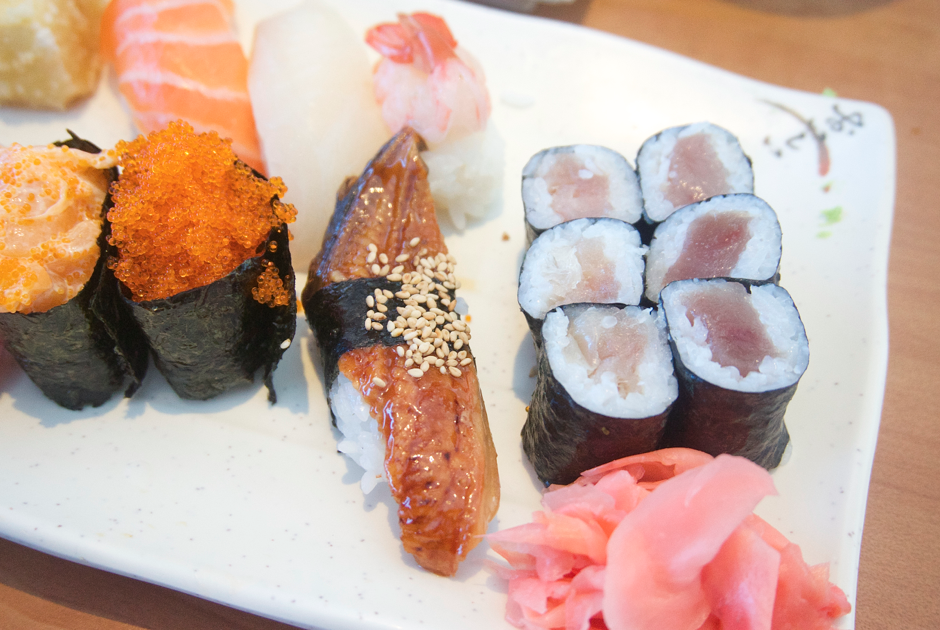 Nigiri Combo $13.50
Tuna Roll: 1.5/5 stars
Unagi: 2/5 stars
For the price, this combo was a pretty decent deal! It came with 8 pieces of nigiri and one full sized tuna roll! To be frank, the rice in the tuna roll was a complete mess lol.
The rice was overly mushy and "wet" in texture, there was actually water on the bottom of the roll! The vinegar flavour was a bit too overwelming though and masked the flavour of the natural tuna.

The unagi was okay, semi tender and glazed with generic tasting teriyaki sauce. But I really liked how generous they were with the sesame seeds! :D 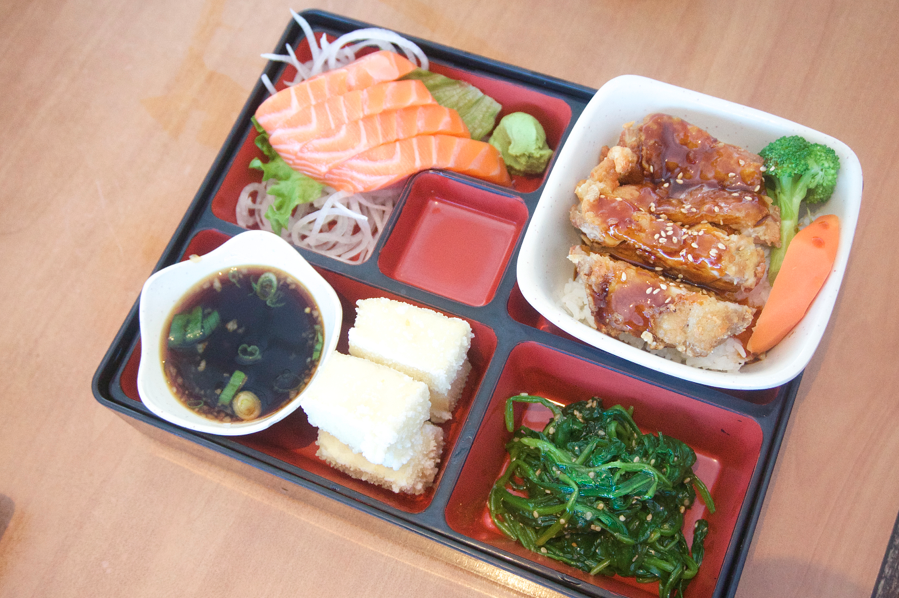 My dad, being very predictable, ordered a lunch bento box haha. It's pretty much his go to whenever we go to a Japanese restaurant. He always orders the one with sashimi in it, without fail, every timee! After finishing it he said that the portion size was too small and he was still hungry LOL. 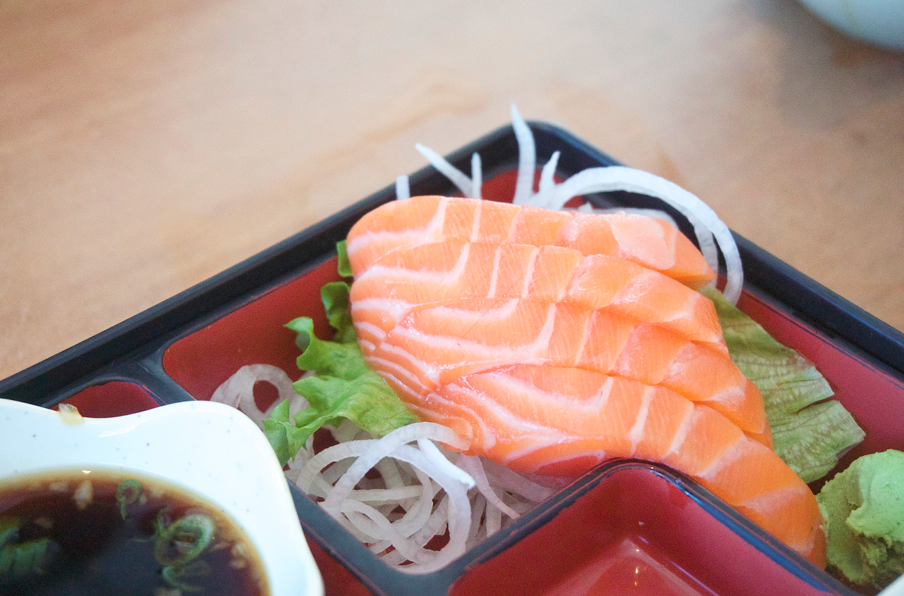 Salmon Sashimi: 2/5 stars
The salmon sashimi, looked fresh and healthy with a pinkish sheen, but was unfortunately quite bland and lacking in overall flavour. 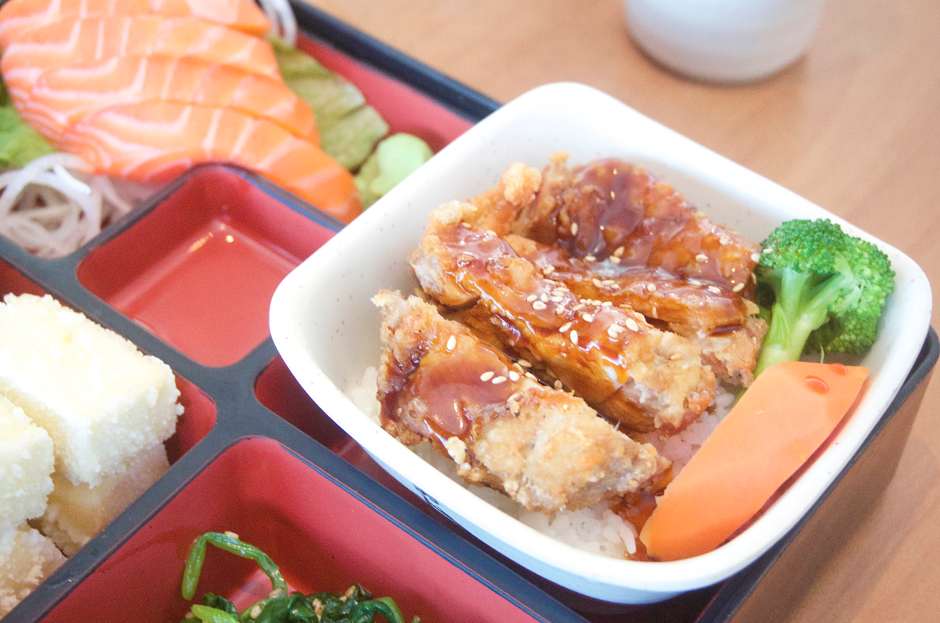 Mini Teriyaki Chicken Don
3/5 stars
With thick crispy pieces of chicken on a bed of decently chewy rice, this was a tasty addition to my dad's bento box! The teriyaki sauce wasn't overly sweet and was a nice balance of sweet/salty flavours! 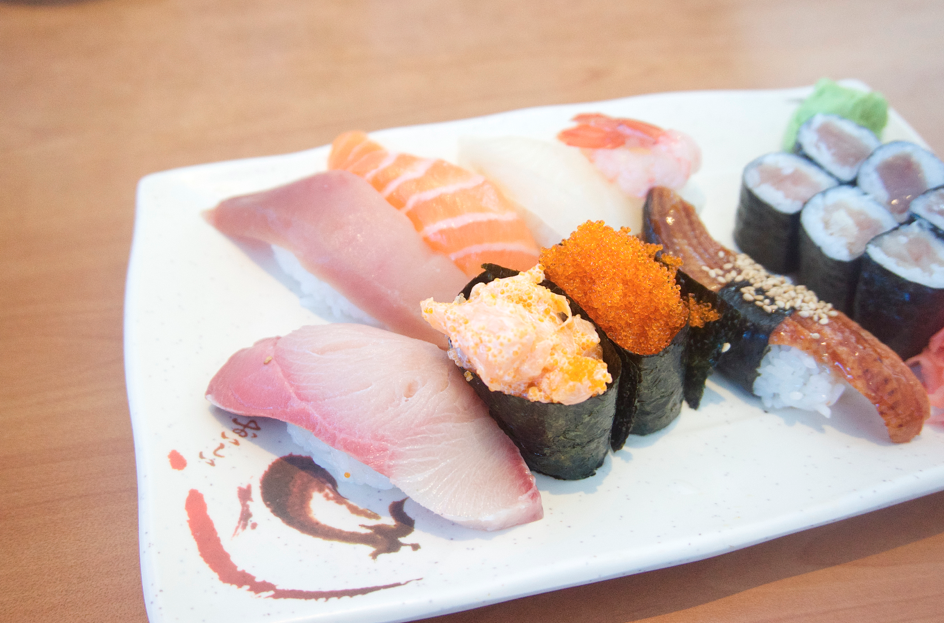 Thankfully the rice in the nigiri was alot better than the tuna roll haha! The rice wasn't mushy but it was still noticeably "wetter" in texture than alot of other places. You can't really tell from this angle, but the chopped scalloped and masago nigiri was actually shaped into a circle! Taste wise, everything was pretty standard, but the raw fish didnt taste very fresh. But the chopped scallop wasn't overdressed with mayo, and the amaebi was snappy and had a nice light flavour. Like the nigiri, I found the rice to be overseasoned with vinegar which partially masked the natural taste of the fish. 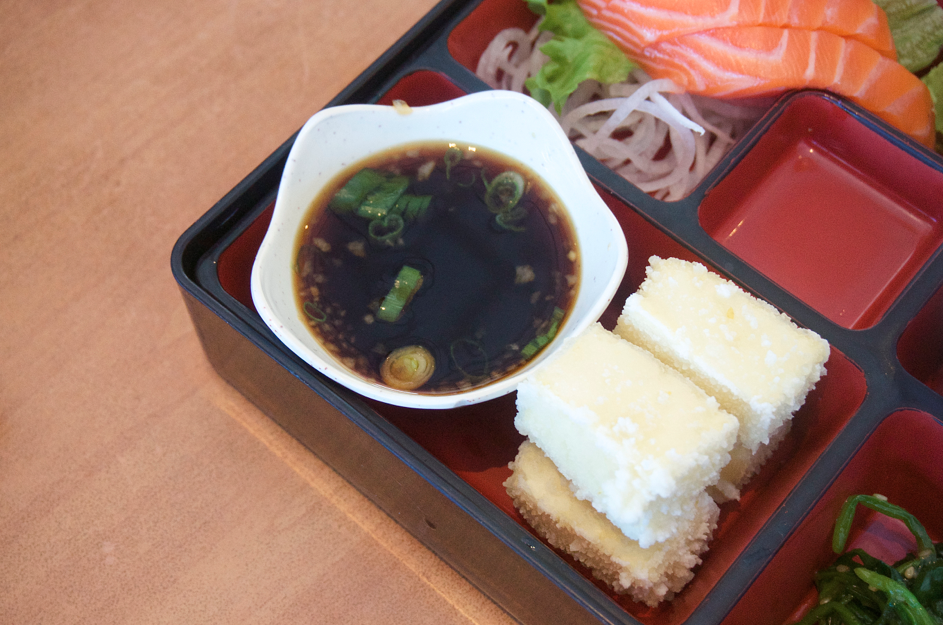 My dad's bento box came with 4 small pieces of agedashi tofu! Instead of having the tofu sitting in the sauce, the sauce was served on the side for dipping! The exterior was light and not laid on too thick, which rendered the outside nice and crispy! 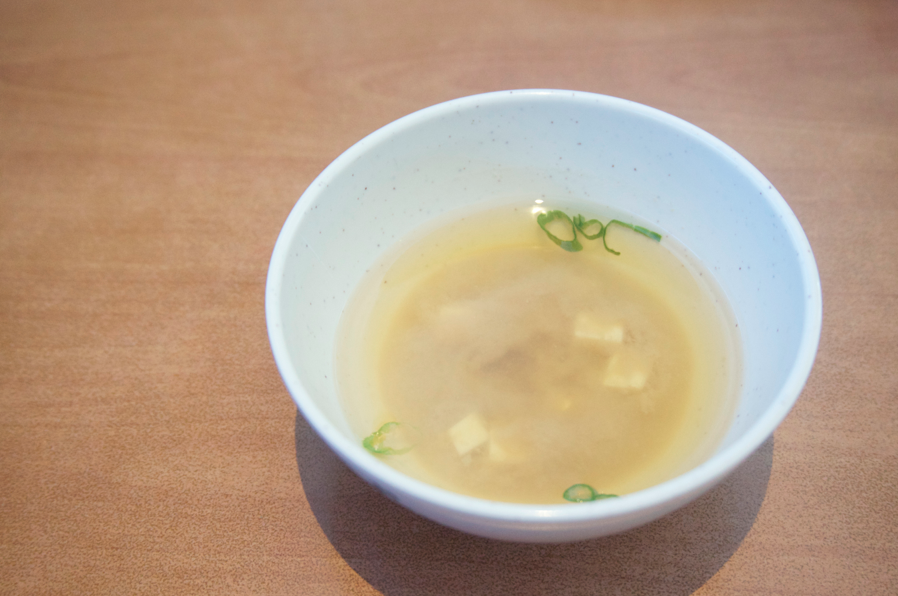 All the lunch specials also come with a side of miso soup! The miso soup was meh lol, it was too watered down for my liking, you can tell just by looking at it! 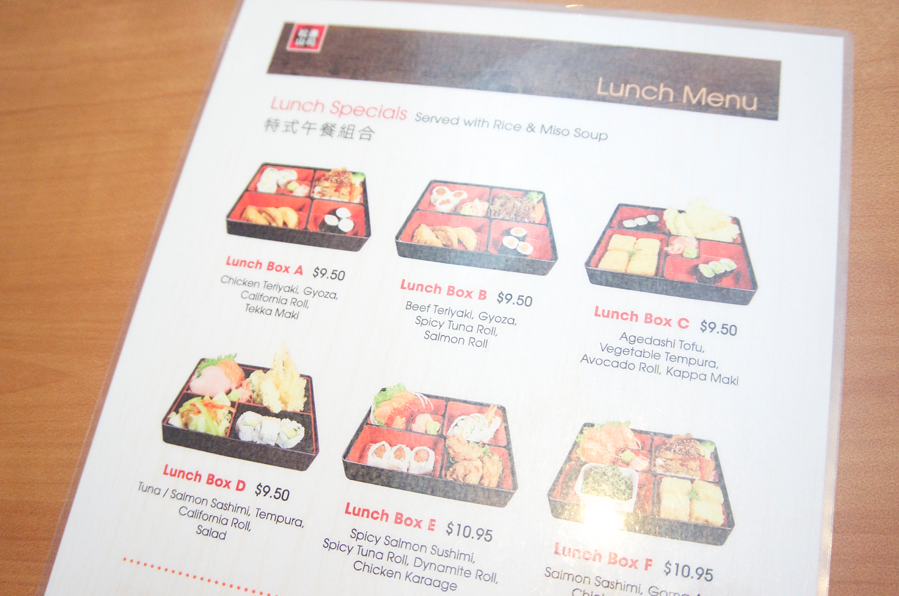 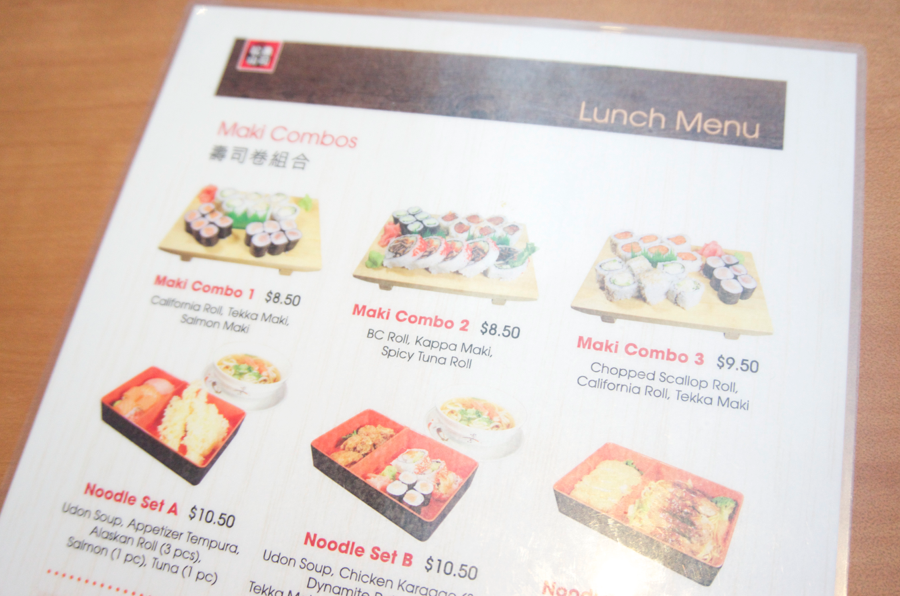 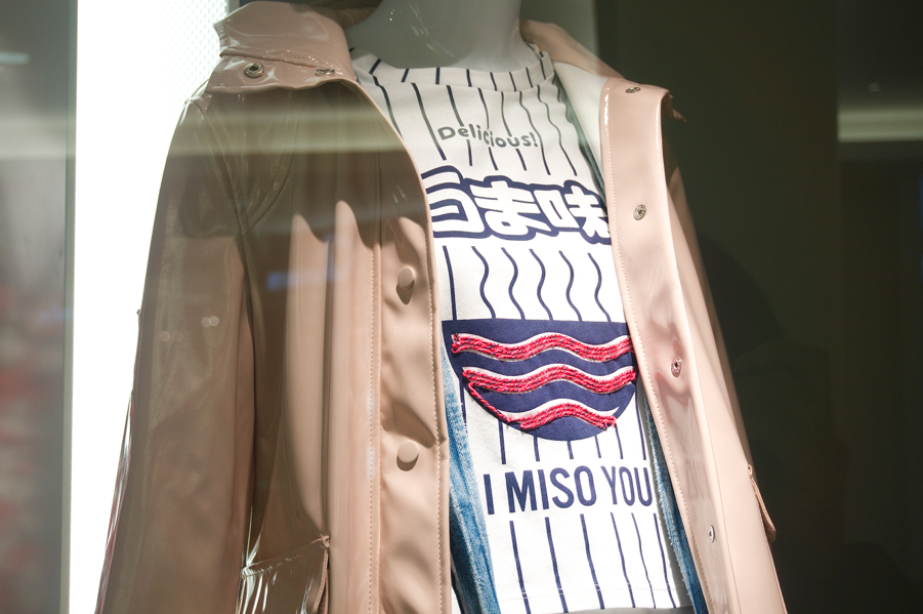 I MISO YOU!! hehehe
Check out these uber cute shirts I spotted at Zara the other day!! ;) 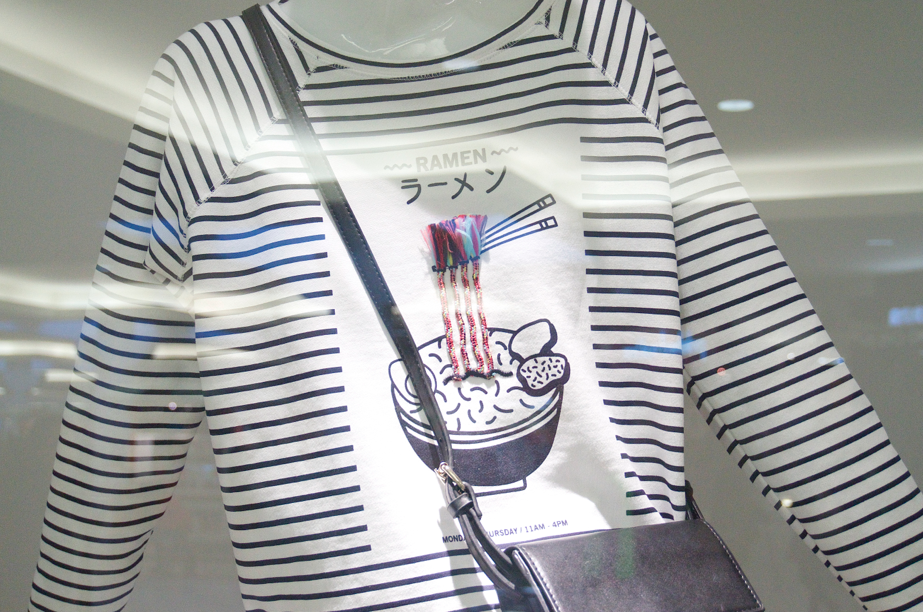