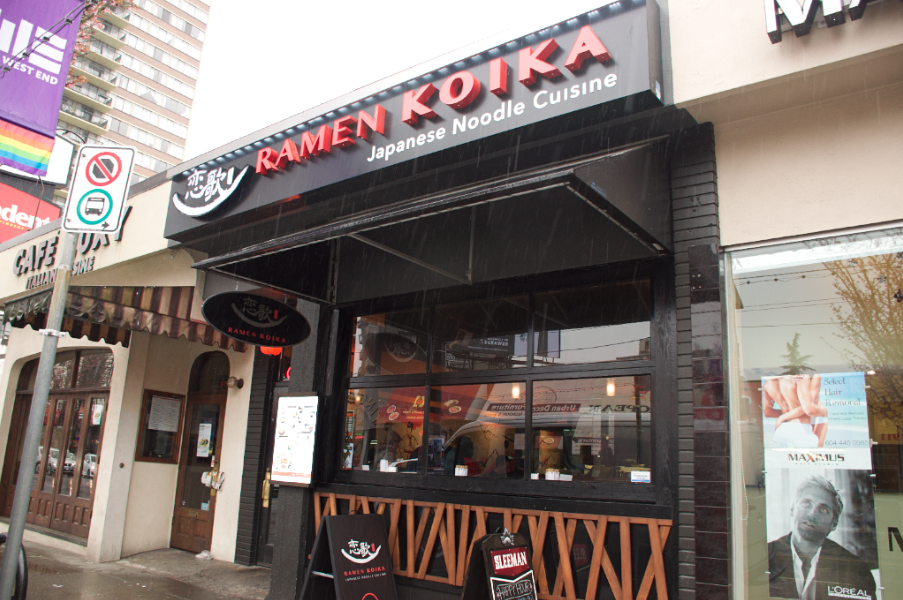 Whenever it starts raining I start craving ramen. It's a problem okay. So basically I crave ramen everyday in the winter. It hasn't rained in 2 weeks though, and since it started raining again today, I decided to take advantage of the miserable weather and head downtown for some bellay warming noodles! :D

Ramen Koika is a relatively new contender to the downtown ramen scene, what's neat about Koika is that they have "wok fried" ramen, meaning that they wok fry the ingredients on top which imparts a smokey flavour into the final product!

They also have this thing called the Koika Red Ramen challenge, if you slurp down every last drop of their spiciest ramen, you get it for FREE!!! And you get your picture immortalized on their wall of flame. Get it, Wall of Flame?? Pretty clever eh? harhar. *slaps knee* - (Wow you sure are easily amused Selina)

But it's no easy feat...you have to finish the entire bowl, including the soup in 15 mins flat!! I would rather eat 3 bowls of regular ramen then down a bowl of their level 3 ramen...I have a very low tolerance for spicy food.

After taking a look at the menu I was suspecting Ramen Koika to be Korean run, because there was kimchi on the menu haha.  My thoughts were confirmed when I took a quick peek at Dennis the Foodie's post! But at the end of the day, while important, authenticity doesn't really matter, as long as the food's properly made!! :D 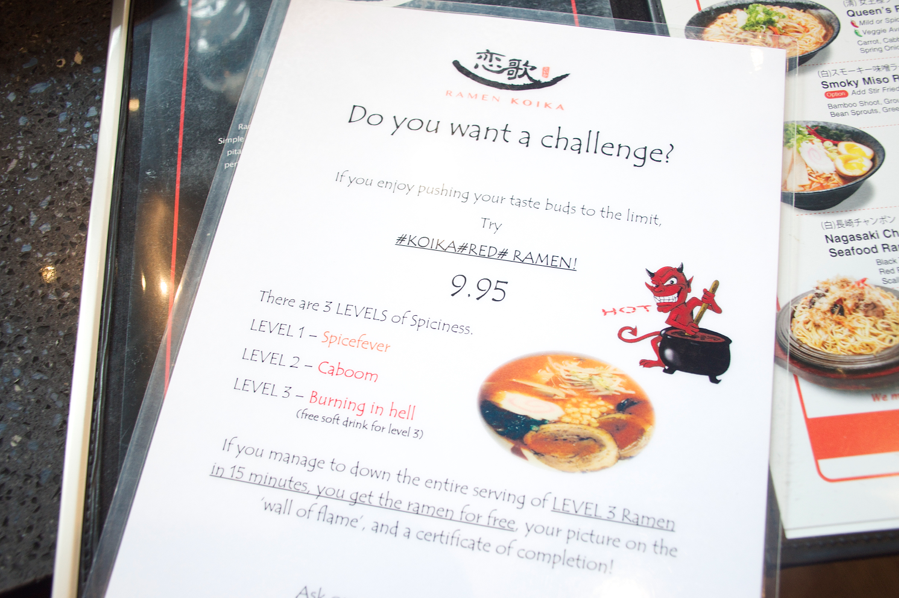 My mom was thinking about doing the Level 3 challenge but backed out at the last minute, she was like "If I did it I would probably need an ambulance after!" 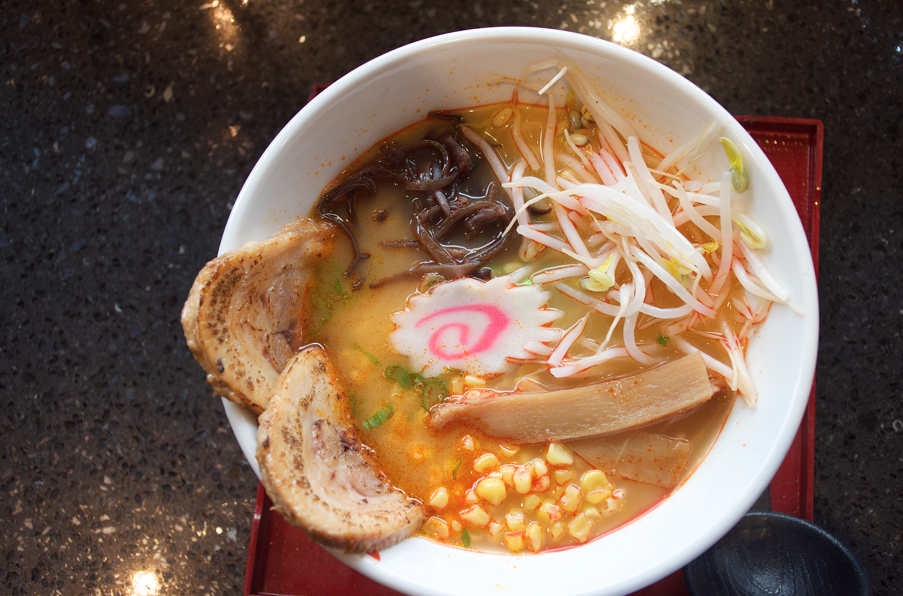 Red Ramen - Level 1 Spicy Fever $9.95
Pork Broth w/ Char Siu
3.5/5 stars
My mom chose the red ramen, and she really liked it! It was just the right amount of spiciness, tolerable but not mild either. The broth was smooth, with a strong pork bone flavour. She commented that there was depth beyond the initial spiciness, so it wasn't one note! The fatty pieces of char siu pieces were semi-tender and they were seared which imparted a subtle smokey flavour. The noodles were appealing as they were al dente and had bite. 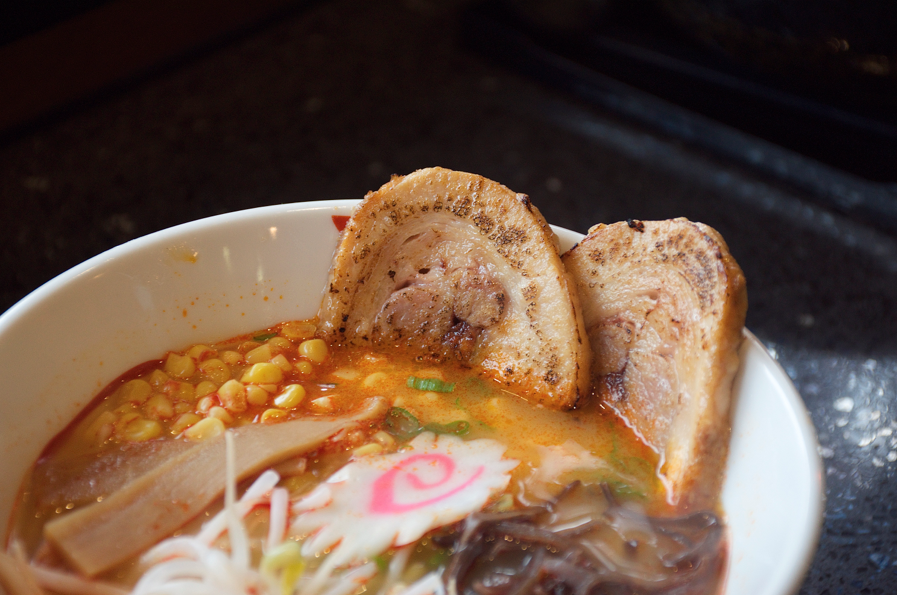 The dilemma of fatty or lean char siu? Who are you kidding, there is NO dilemma, FATTY ALL THE WAY!!! <3 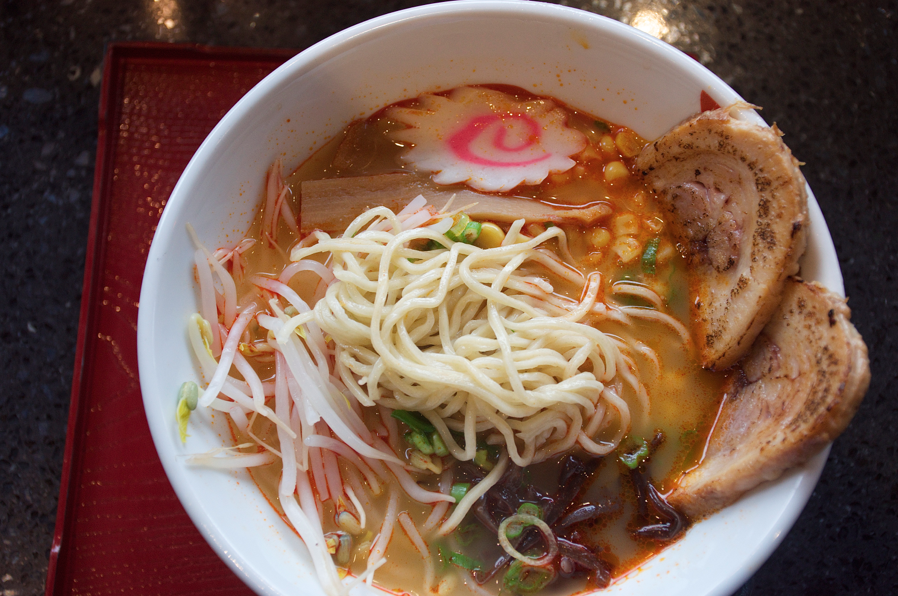 You can opt for soft or hard noodles and I went with hard!! I like 'em noodles al dente ;) 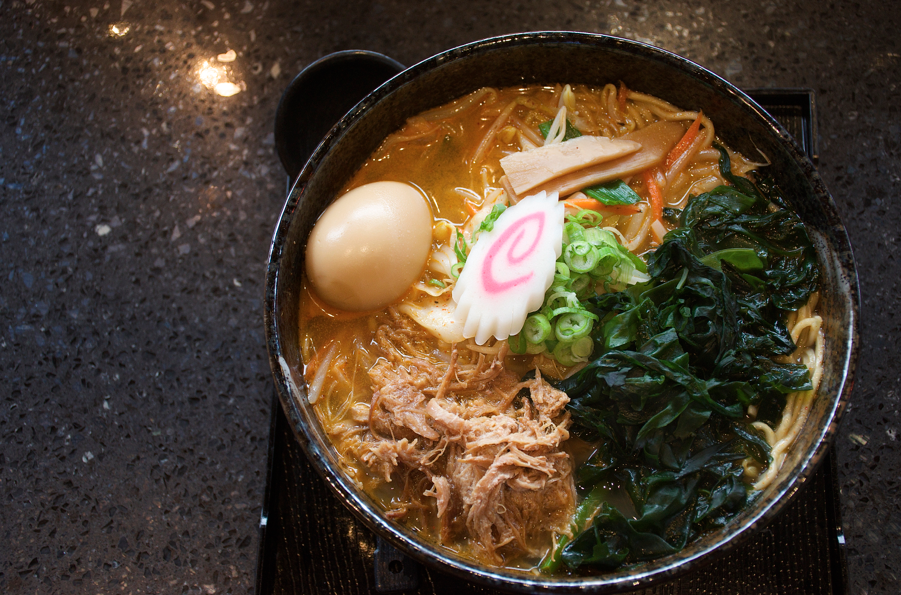 Wok Fried King's Ramen $11.95
Chicken Broth
3/5 stars
This was a huge bowl, a lot larger than my mom's red ramen! I didn't really know what to expect, but this was pretty good!! I could definitely pick up the wok flavour, so it almost felt like I was eating chinese noodles lol! The chicken broth was mildly spicy, exhibiting a tinge of spiciness that gets stronger as you slurp. The shredded pork was surprisingly good, it was moist, flavourful and tender. The egg was cooked right and wasn't over marinated! They added a ton of bean sprouts, and seaweed, in there, so the whole thing was pretty healthy! :D 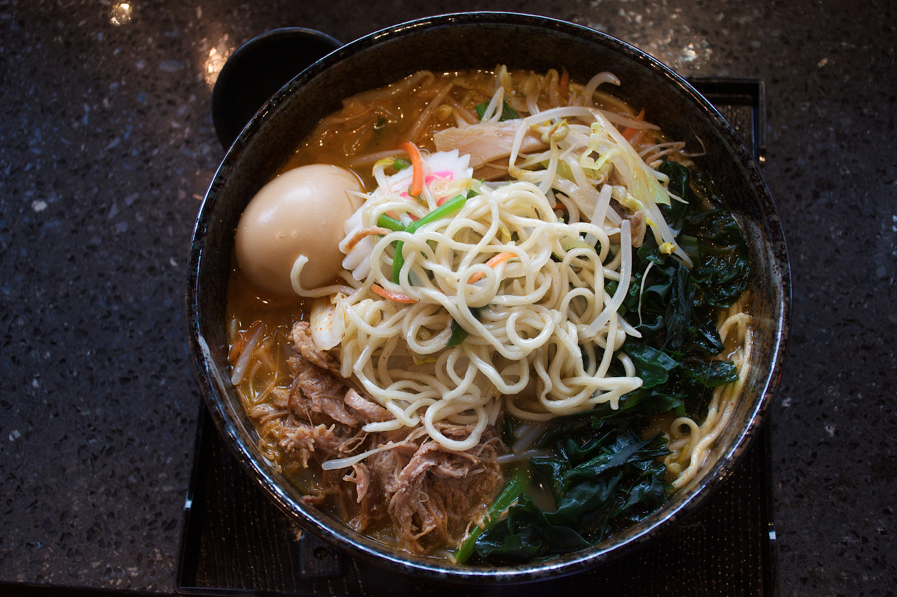 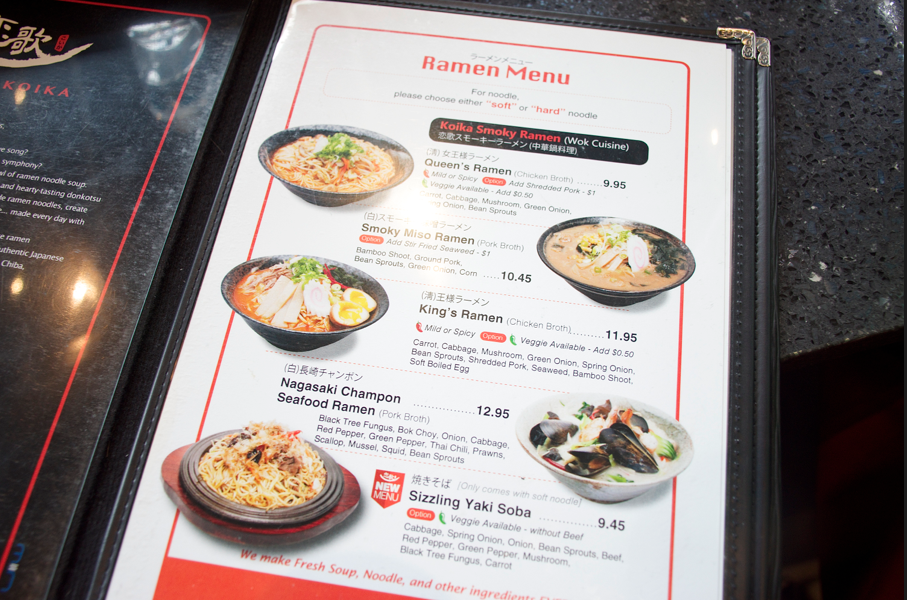 I am so getting their smokey miso ramen next time!! 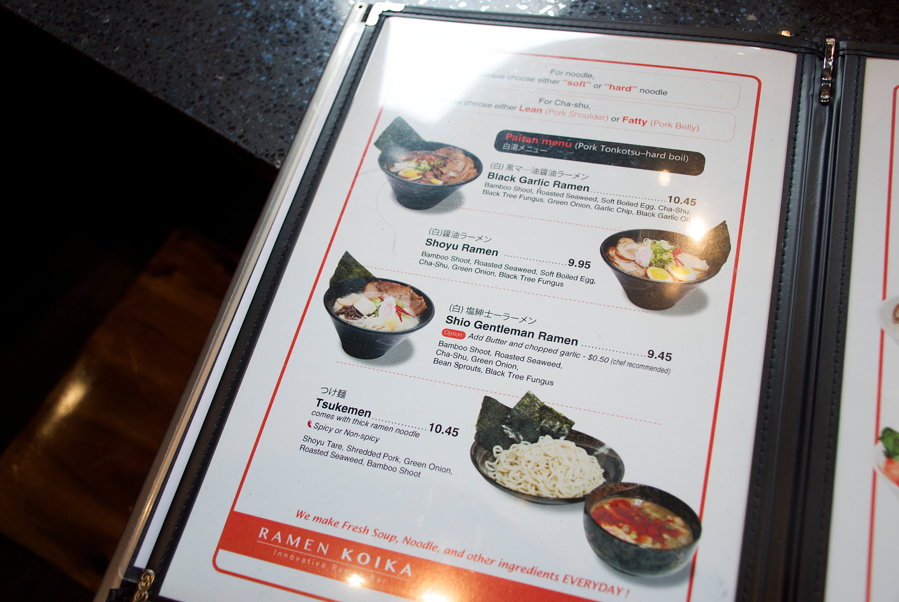 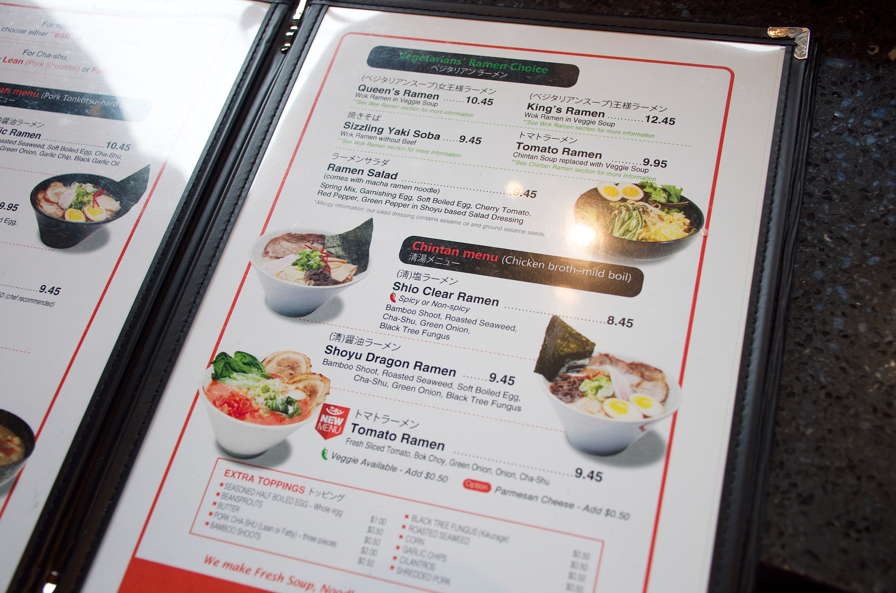 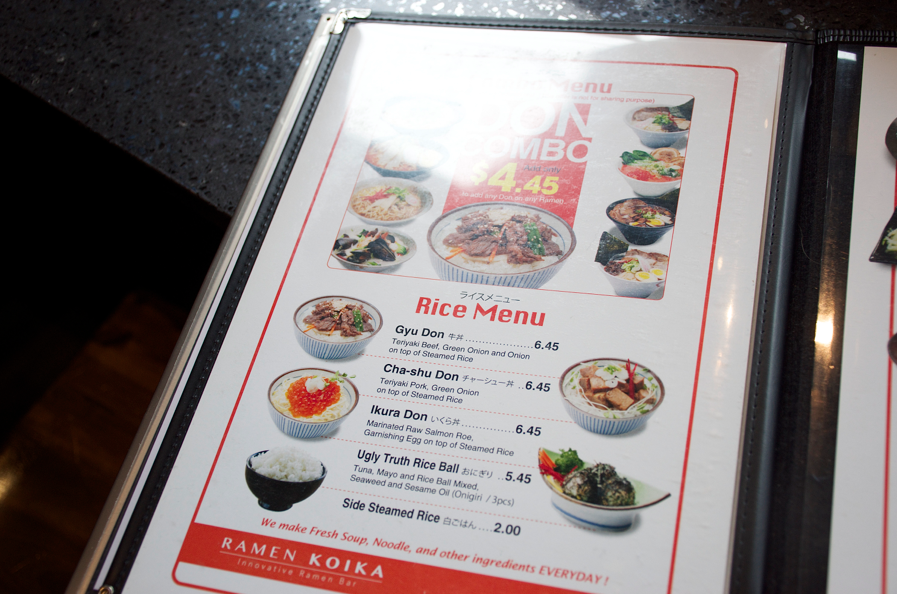 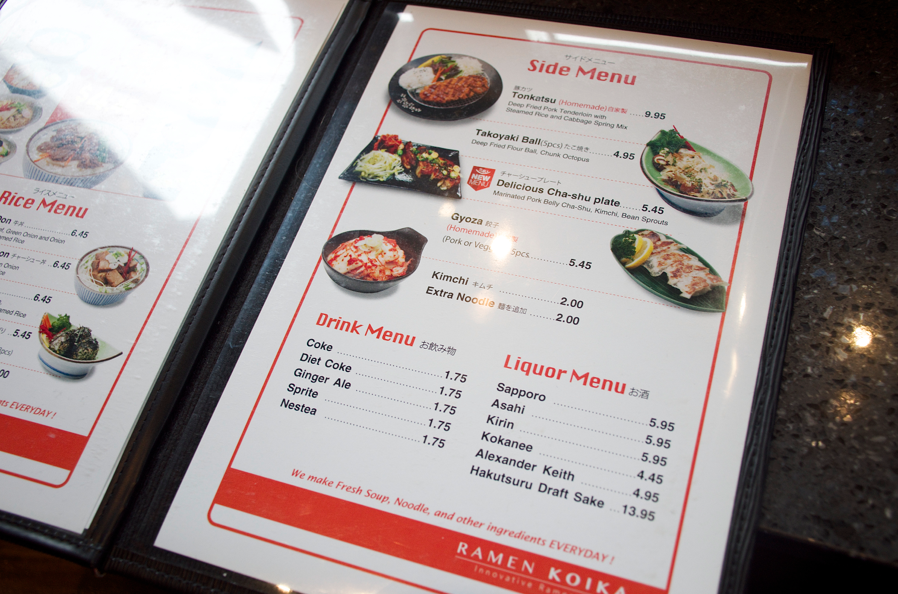 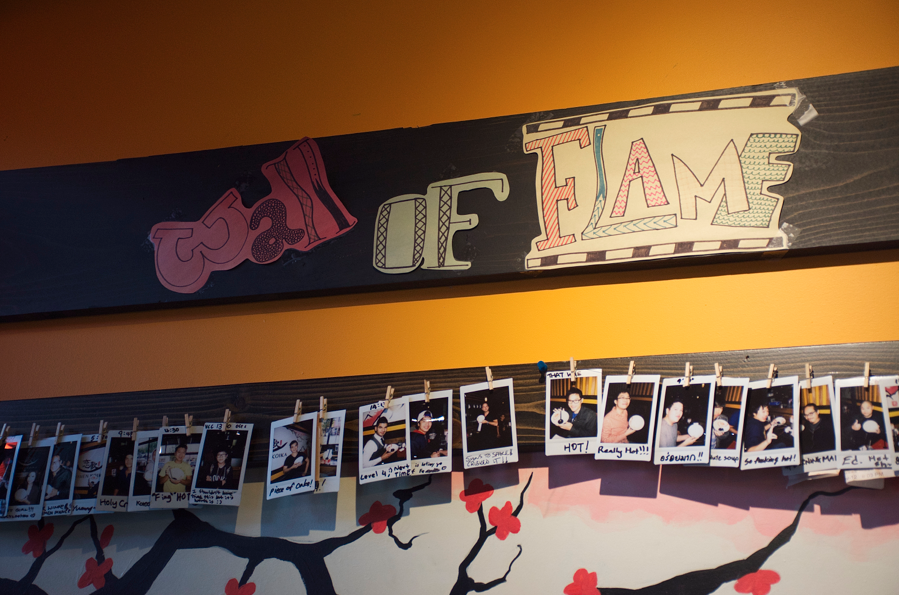 Their infamous wall of flame!!! :D  They have polaroids of all the people who completed the challenge holding an empty bowl lol!