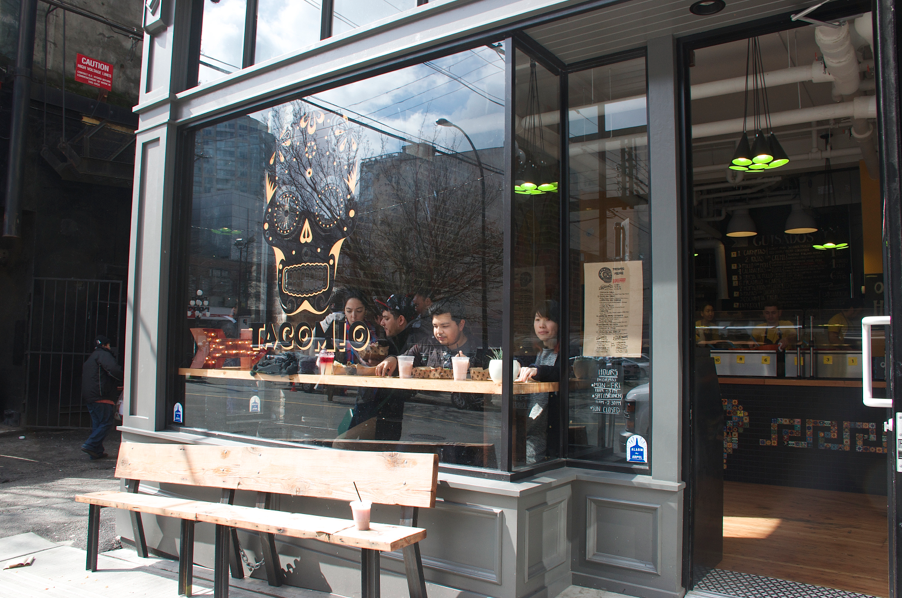 Hey look, a new taco shop just opened up in Gastown!! I haven't had tacos in SOO long!! It's been MONTHS. But I have a soft spot for tacos... I should really eat them more often. Remind me to okay guys? Sometimes I forget...there's just so much to eat in Van and I get distracted! ;)

Maybe I should designate a day for Taco eating and write "TACO TIME!!" on my calendar to remind myself to eat more tacos harharhar.

I think I was the only person who ordered 6 tacos LOL, everyone else (from what I observed) ate like 2-4!! When I was ordering the guy was like "You're already over 4 tacos" and I was like "Yes, I want 6"! And I also ordered a side of the chincharros/chips with guacamole and a strawchata!! "That girl can eat!"

This place was bustling during lunch hour!! Everything is already made so you pretty much get your order as soon as you pay at the counter! There's only a few bar seats at the counter, so most people took their order to go!! Or you can sit on the bench outside and munch on your tacos in the sun!!


Tacomio is just a few blocks away from Tacofino, so they definitely face some pretty fierce competition!! They're steps away from the Stadium-Chinatown sky train (so handy for people like me who ride the sky train everyday), and a few doors down from Prado Cafe, which just opened their newest location!! 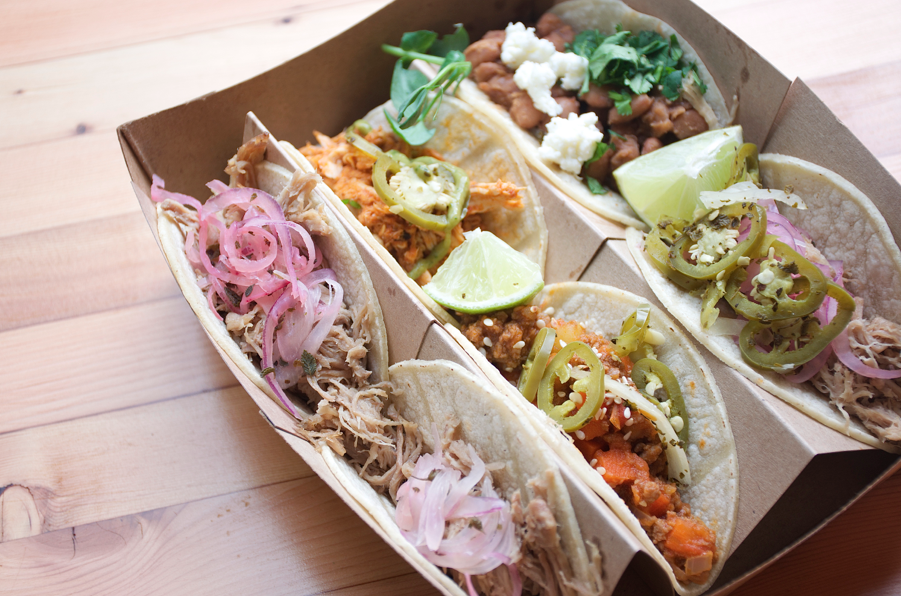 I thought everything was a-ok! The tacos weren't mindblowingly delicious, but it wasn't bad either. I got 2 carnitas because the pollo con mole had nuts in it! :(
The meat themselves weren't very well marinated so they relied heavily on the added toppings/sauces for flavour. The meat was juicy though and not dry at all! My favourite flavour was probably the carnitas, the addition of red onion really helped brighten up the flavours! The chorizo one was really spicy, and the beans in the frijolitos were nicely cooked with a hit of cilantro.

The tortilla shells were thin, elastic, and held up the contents of the taco without breaking. I prefer how La Tqueria layers the tacos with 2 pieces so the tortilla shell isn't so flimsy and there's more chew haha...but that means more calories doesn't it? ;)
Sidenote...I really like the boxes the tacos came in, maximizes surface area and perfect for to go orders!! 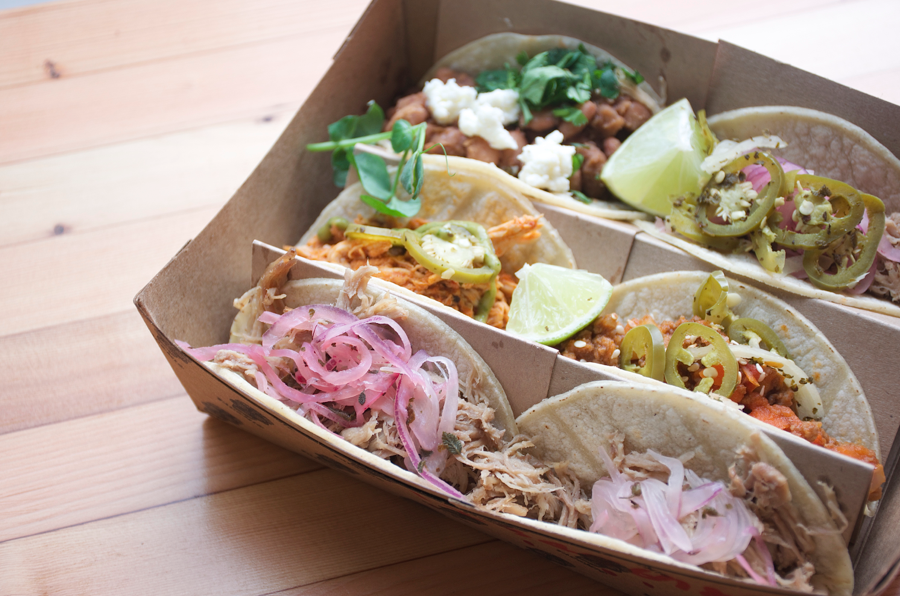 And yes...I did manage to finish EVERYTHANG!! ;) 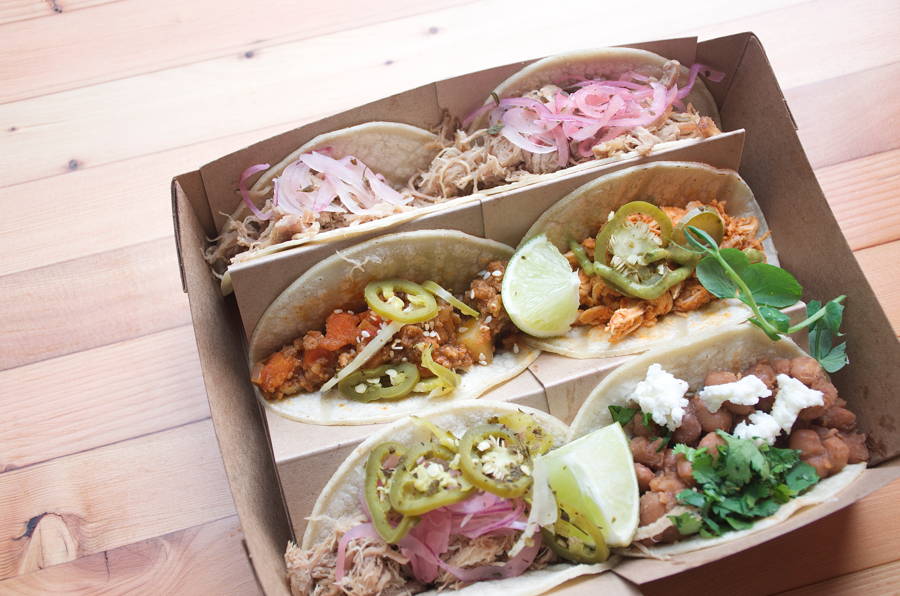 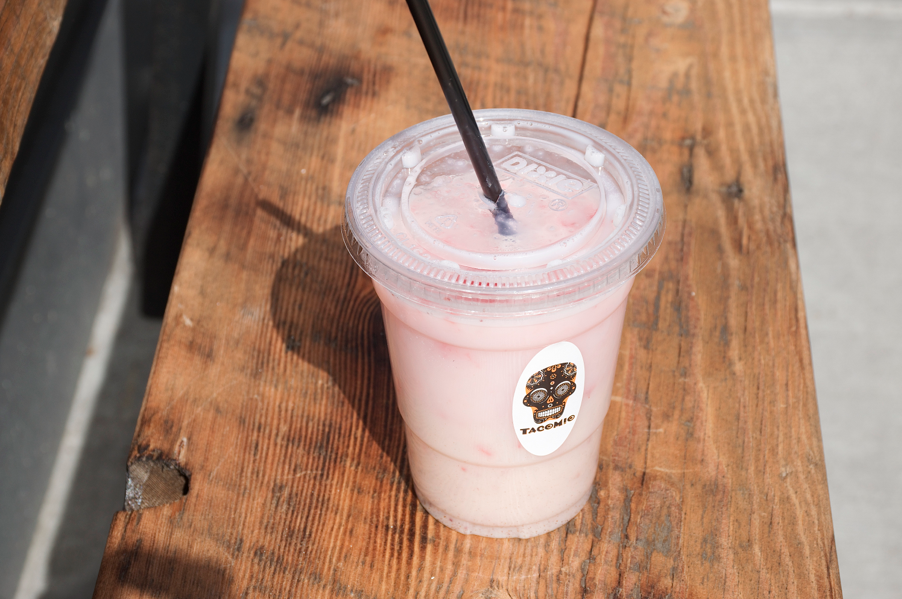 Strawchata $3
Strawberry flavoured Horchata!
2/5 stars
Almost everyone had a drink with their tacos haha, so obviously I had to join in on the fun! They have two kinds: their strawchata, and a hibicius limeade, and I went with the more filling one hehe! I asked for no ice because I hate when the ice dilutes the actual flavour!

The drink was really thick, almost smoothie like in consistency, different from the normal horchatas which are more watery. The strawberry flavour wasn't very strong, but it was definitely there! You can really taste the rice milk and it was mildly sweet- just right! 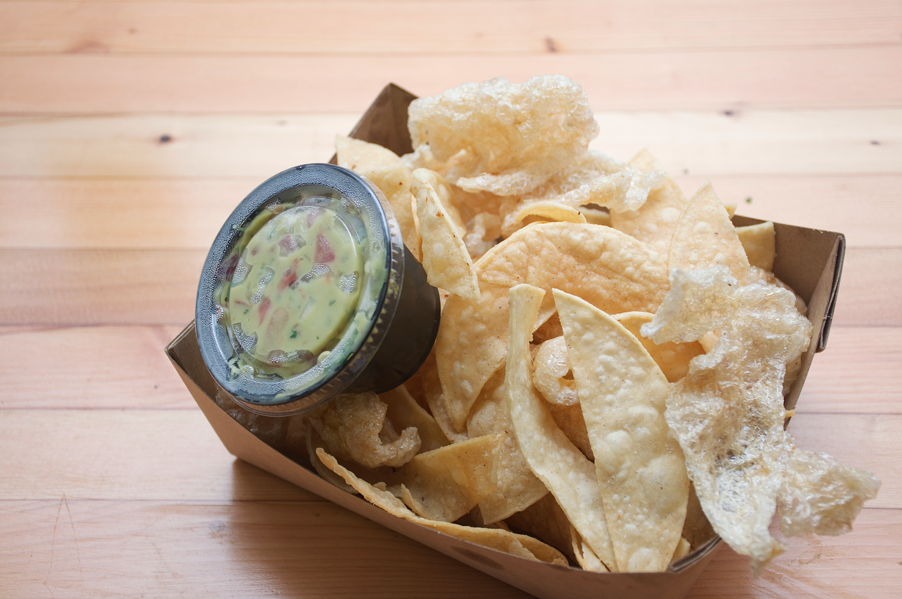 After finishing the tacos I was still hungry hehe (yes I eat a lot) so I went back to the counter to order some moar!!
I am so glad I ordered this!! What can I say: I LOVE SKIN. Chicken skin, pig skin, you name it, I'll eat it! ;)  The chicharrons were awesome! Puffy, crispy, full of fatty flavour, just pure indulgence. (Brb while I go buy myself a entire bag.)

The chips didn't disappoint either: they were crispy, not oily at all, and coated in a flavourful blend of salt + spices! I ate the chips and chicharrons separately without dipping it in the guac because it was already really good on its own! 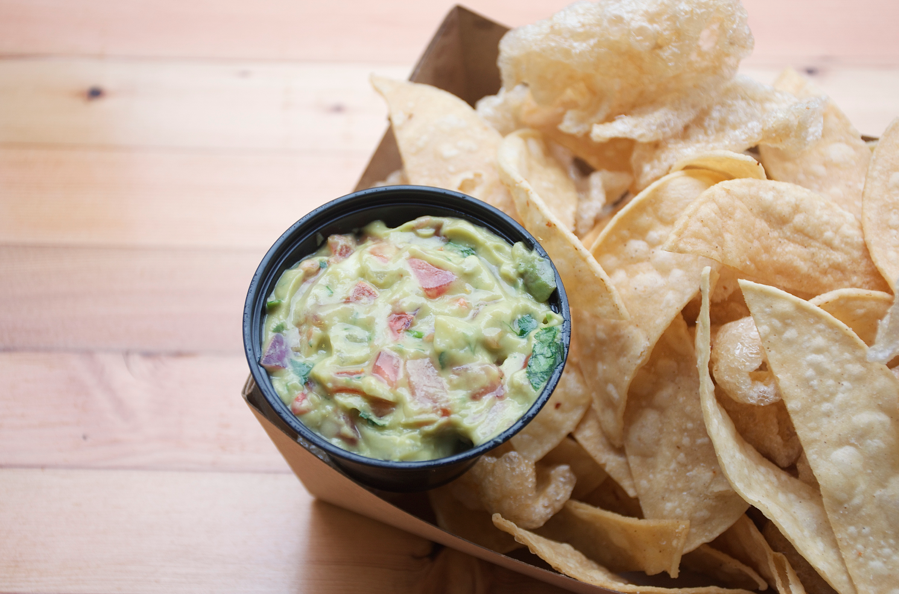 I'm no guacamole expert lol but the guac was nice and loaded with fresh tasting ingredients! :D 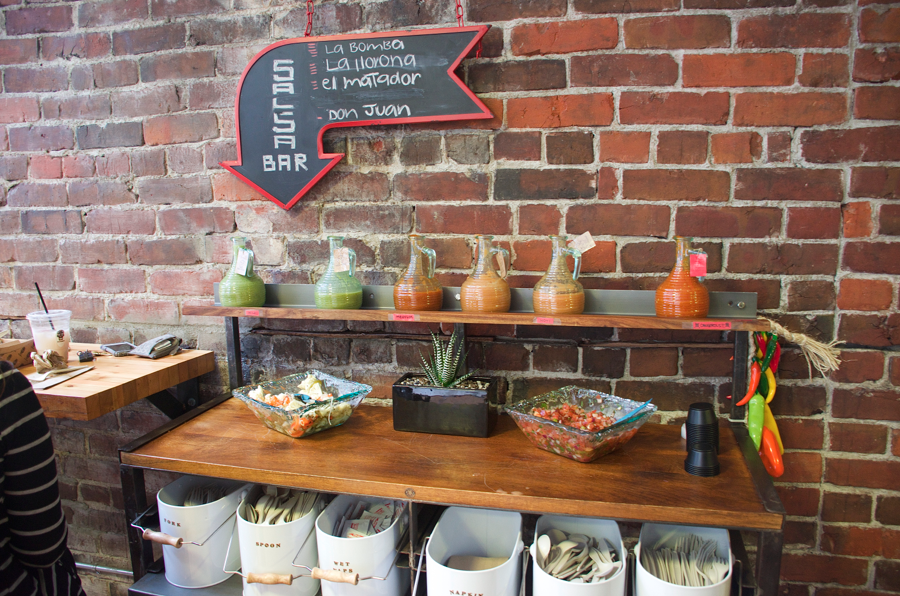 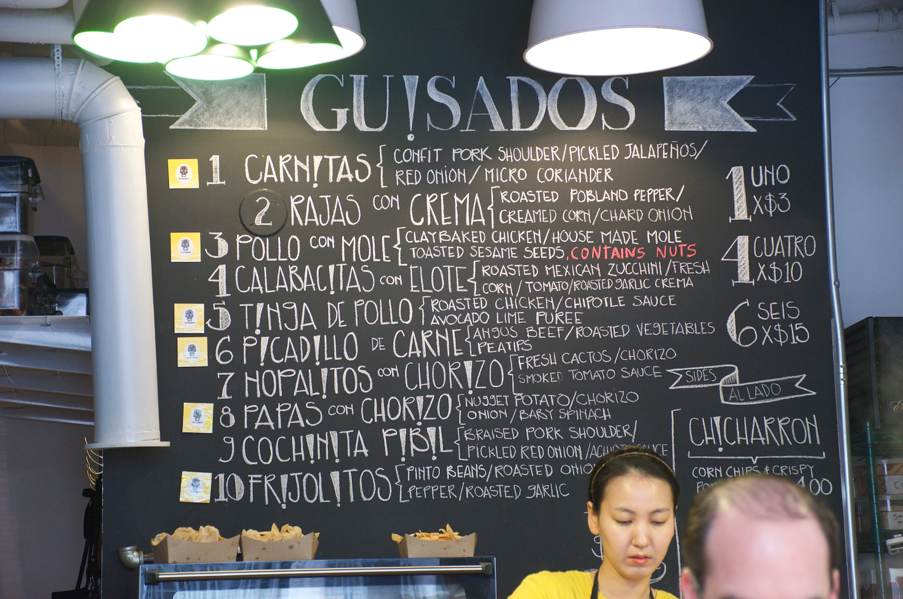 The ones with the sticker beside them are the ones that are available! 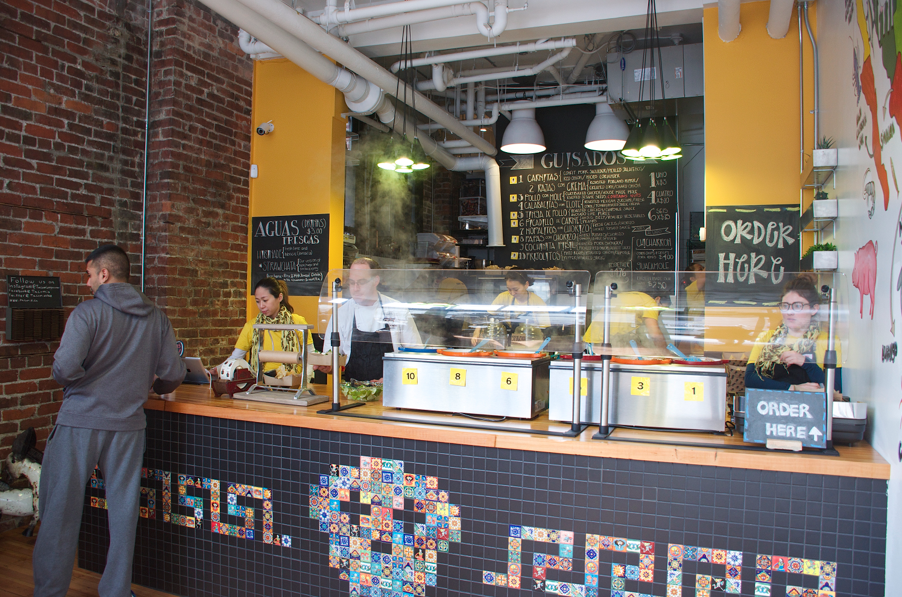 There's no table service, order at the counter and grab a seat! :D 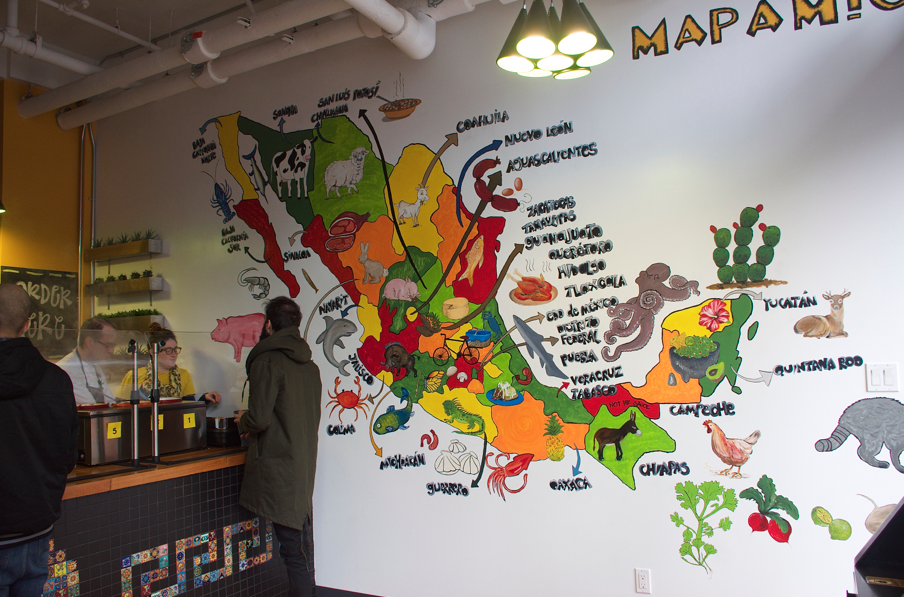