Bao Down - GUA BAOS in Gastown!! 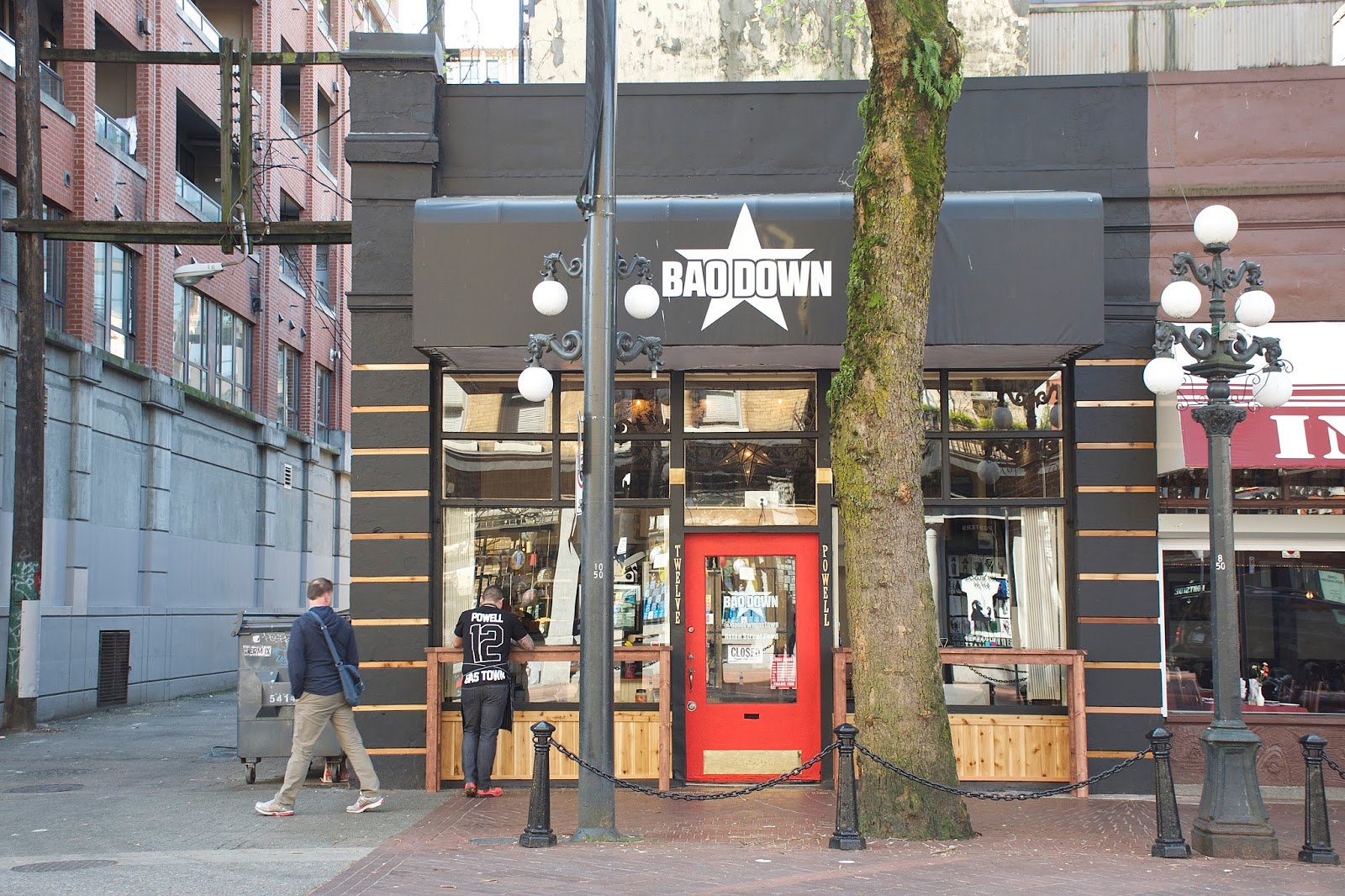 I had SUCH a gastronomically satisfying day today I felt to need to share it with you all LOL. Eager and bright eyed, I arrived at Bao Down at 10:30 am - and they were still closed, so I had to wait outside for 30 mins like the pathetic food fanatic that I am ;)

You guys know I feel about 'em BAOS...Taiwanese gua baos in particular hehe, cause I'm Taiwanese! I use to eat those things every other day in Taiwan when I visited in the summer LOL...as a midnight snack (I was so healthy back then.) Um, how can one say no to slick slabs of pork belly sandwiched between a pillowly soft bao bun?! That's what I thought ;)

Bao Down has been on my radar ever since super commenter @LotusRapper tipped me off about their opening a few weeks ago  - so today I finally made the trip out to Gastown to try out their glorious buns for myself!!

There was actually a professional photographer there taking pictures for their advertisements at the same time I was taking pictures...which was pretty intimidating LOL, since I'm pretty much a photography noob haha ;)

One of the guys there was like "You're taking pictures too? Are you a blogger?"
and I was like "Possiblyyy" *winkwink*
Hey, I'm supposed to be incognito!! ;)

One of the chefs asked me how I was liking my bao and he was like "Oh good!! I was nervous because you had a camera" so I showed him the pictures and he seemed to really like them!! :D

Everyone here was so nice...seriously!! Especially the girl at the counter - she was super peppy and enthusiastic - just like me hehe! Every time I went back to order something else she would be like "You're back for more!? Yea let's do it!! " :D

So after going to Bao Down I was about to head home...until I spotted Tacofino Gastown, and I stopped dead in my tracks. I can't pass up a good taco. Plus...I was still hungry LOL!!

So I gleefully glided into Tacofino and sat down, feeling half guilty that I had already eaten and was now sitting in another restaurant 8 mins later. OH THE GLUTTONY!!!

I was reading reviews on Yelp and people were saying how 2 tacos was more than enough for them, so that's how much I ordered...and after finishing it I was still hungry LOL...and that was on top of eating 3 baos!! $30 poorer I knew I couldn't spend anymore money, so I bolted out the door before I could do anymore damage  - escaping unscathed, with my wallet still intact ;) 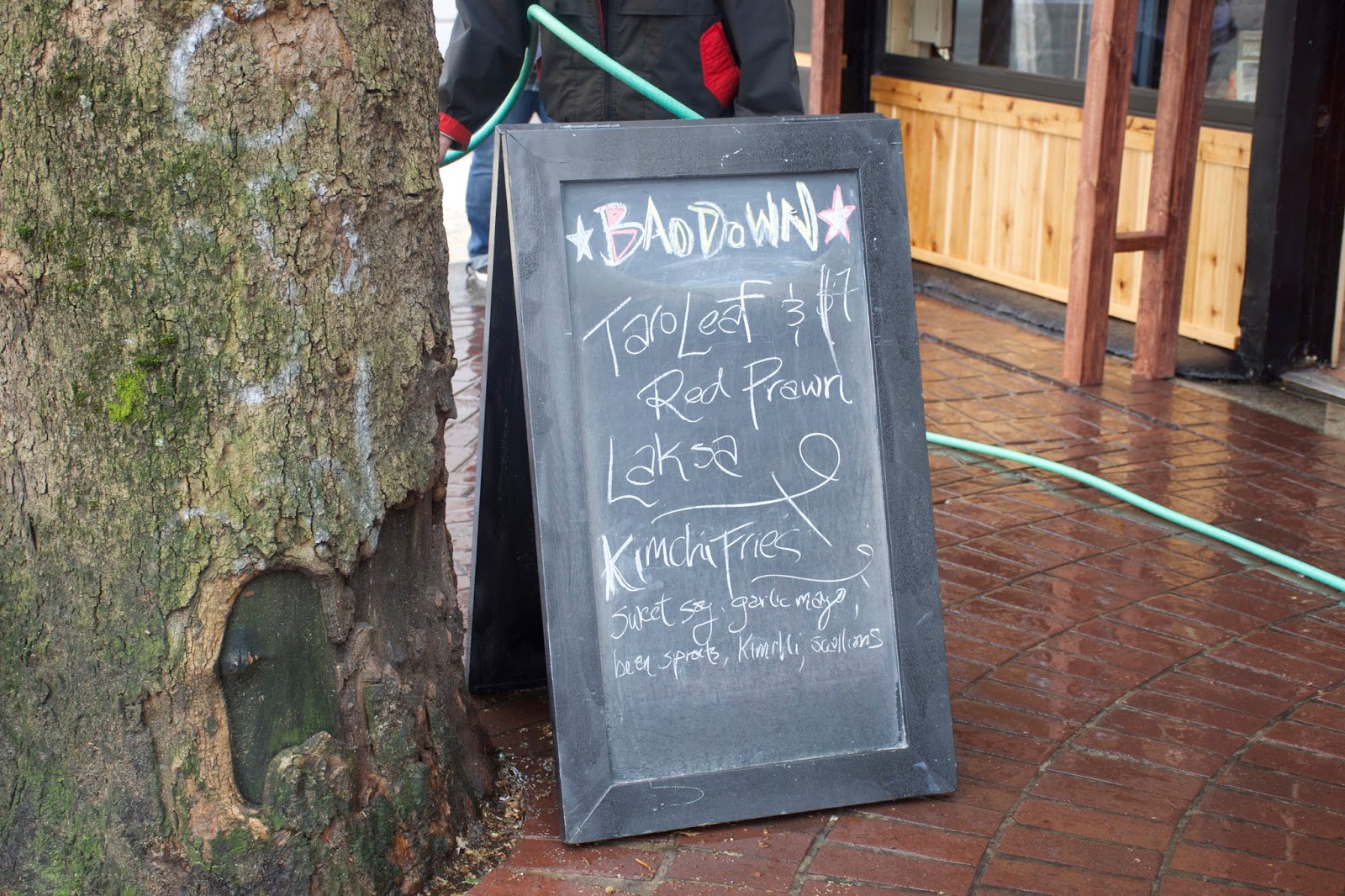 Ohh - they even have laska!! And I am SO coming back for their kimchi fries!! ;) 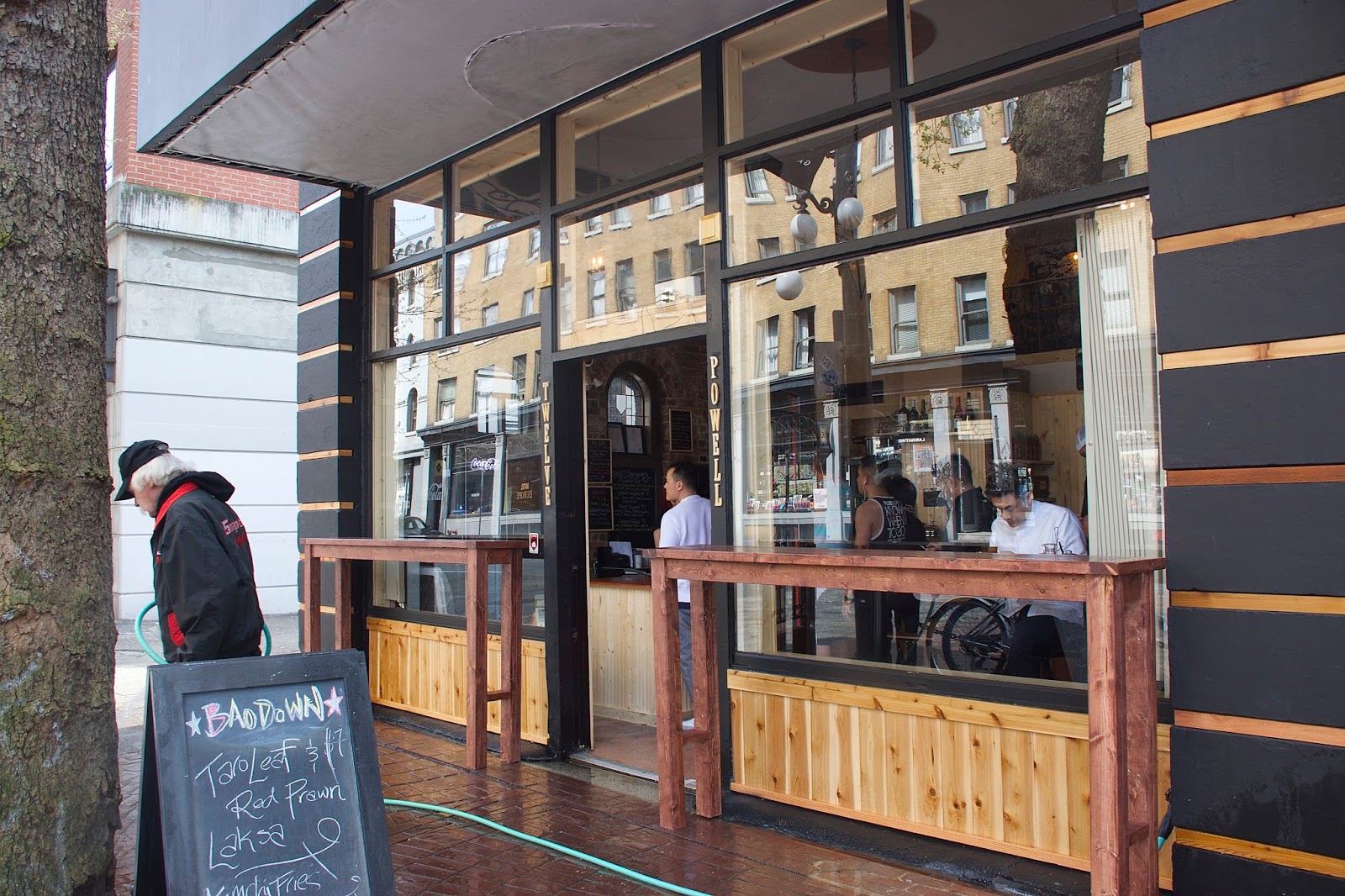 They have tables outside where you can stand and nosh on your food!! :D 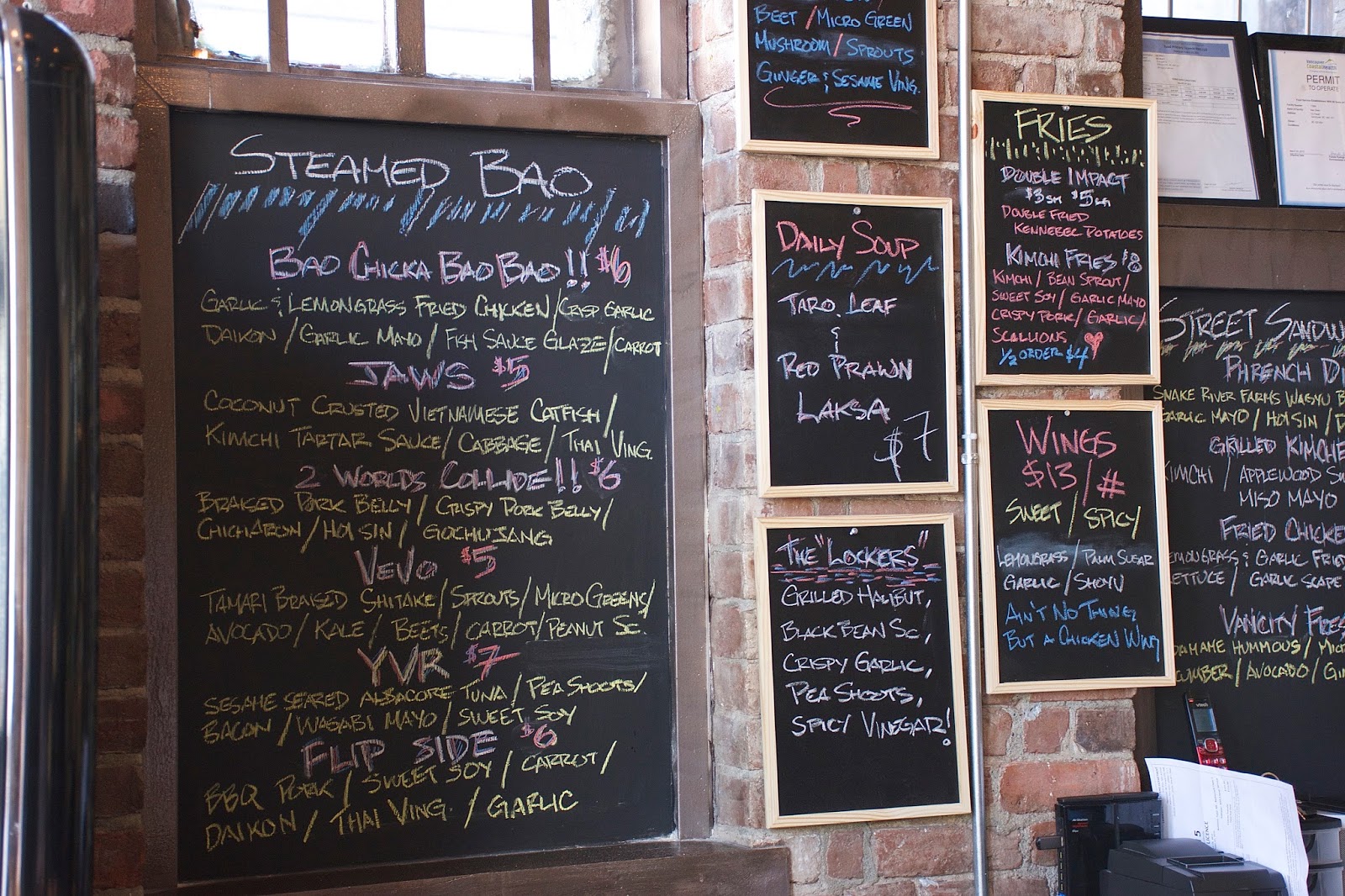 
You can check out their full menu here: http://baodown.ninja/
Their url is .ninja...could this place get any cooler? I think not ;) 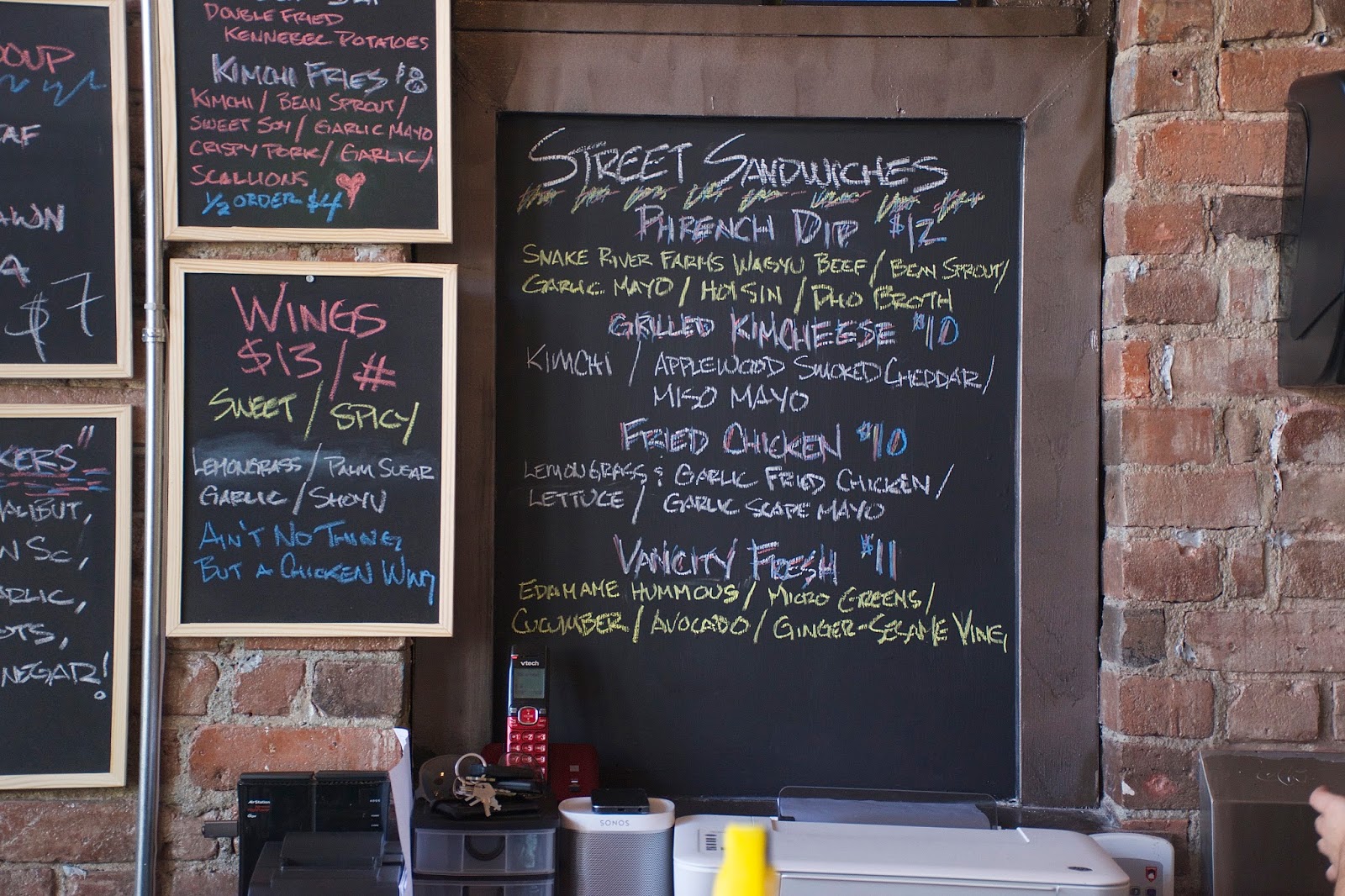 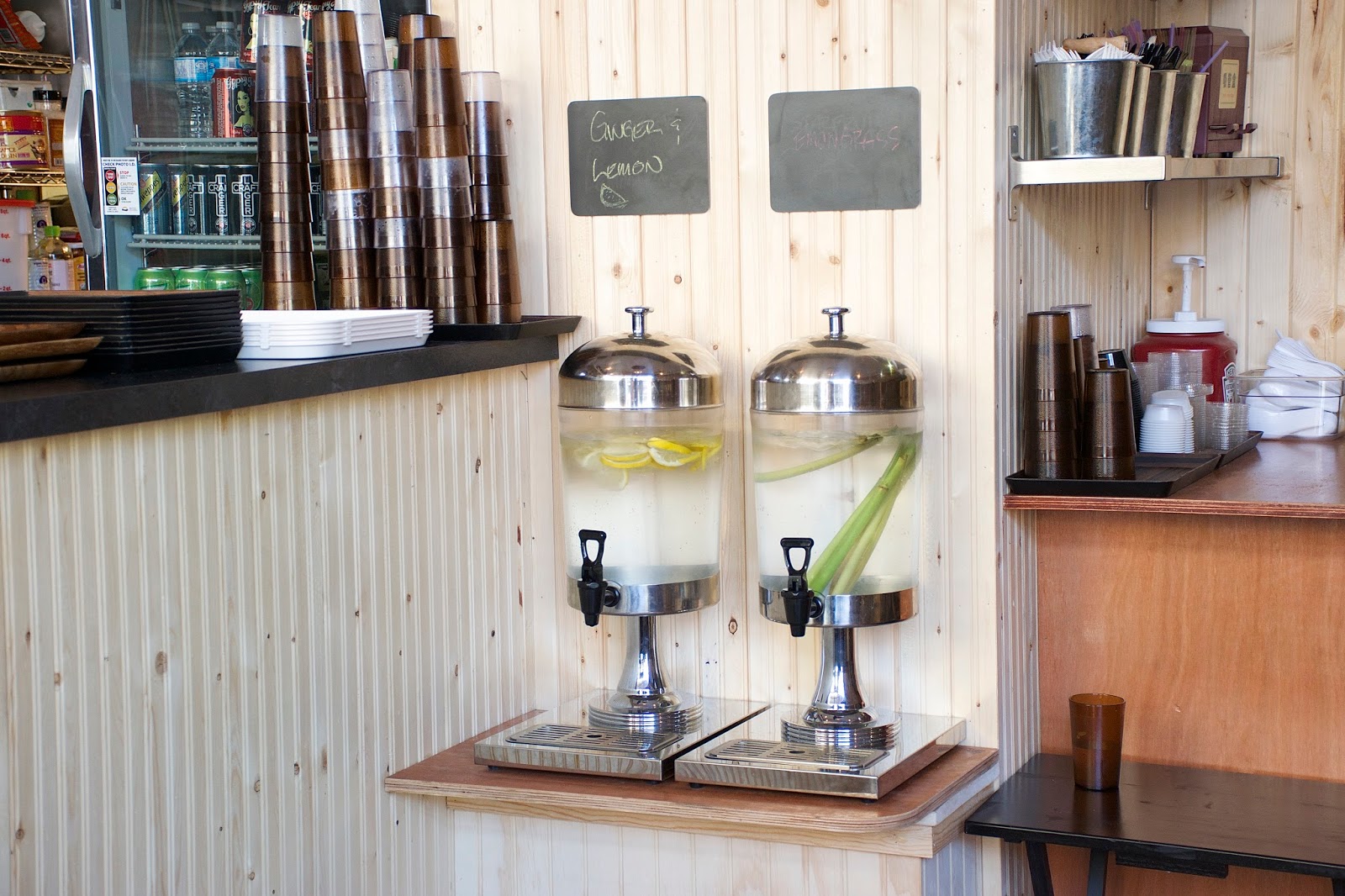 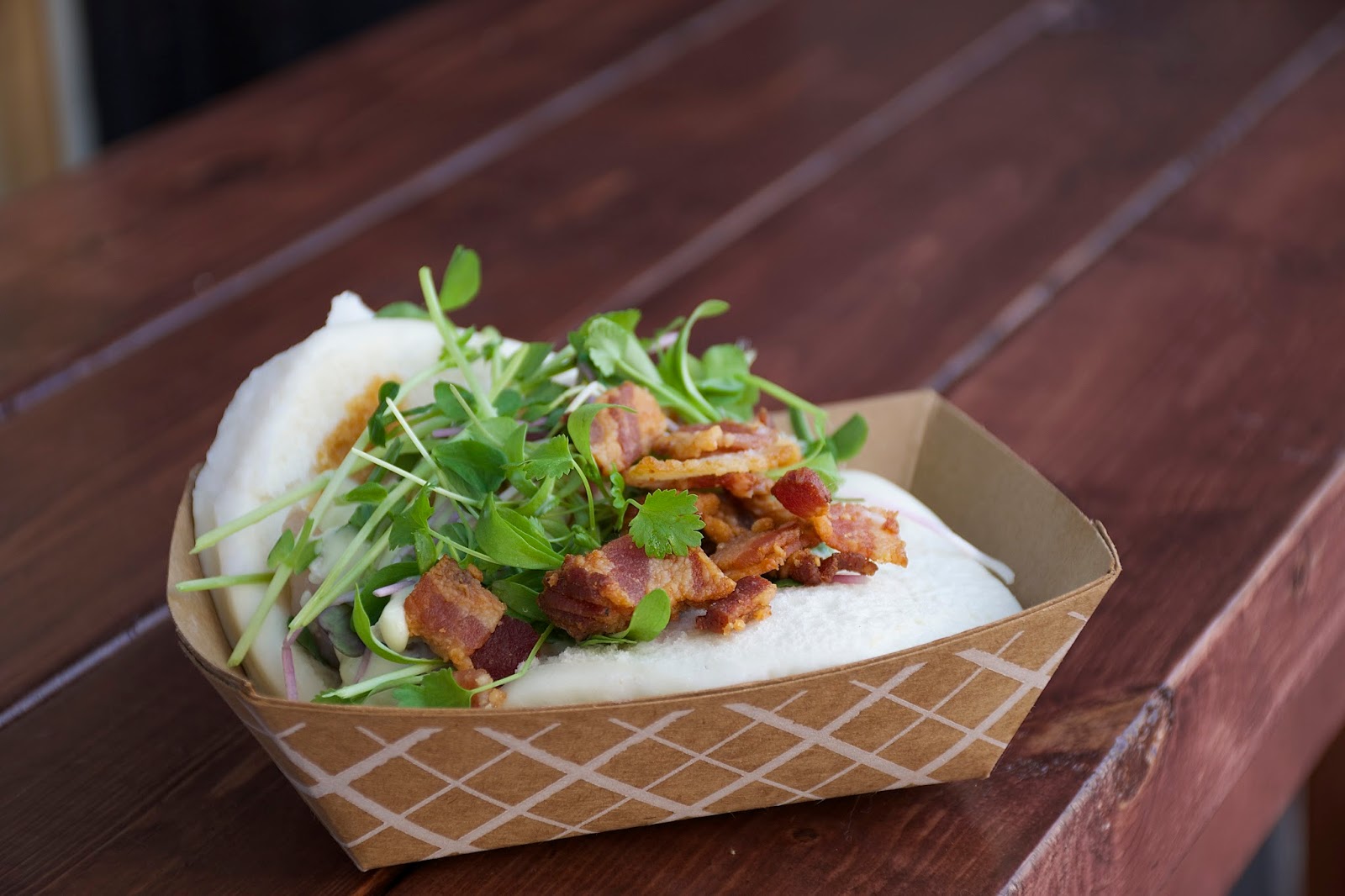 I swear I'm the most indecisive person when it comes to editing photos LOL - in my mind I'm always like "Which angle looks better?!" 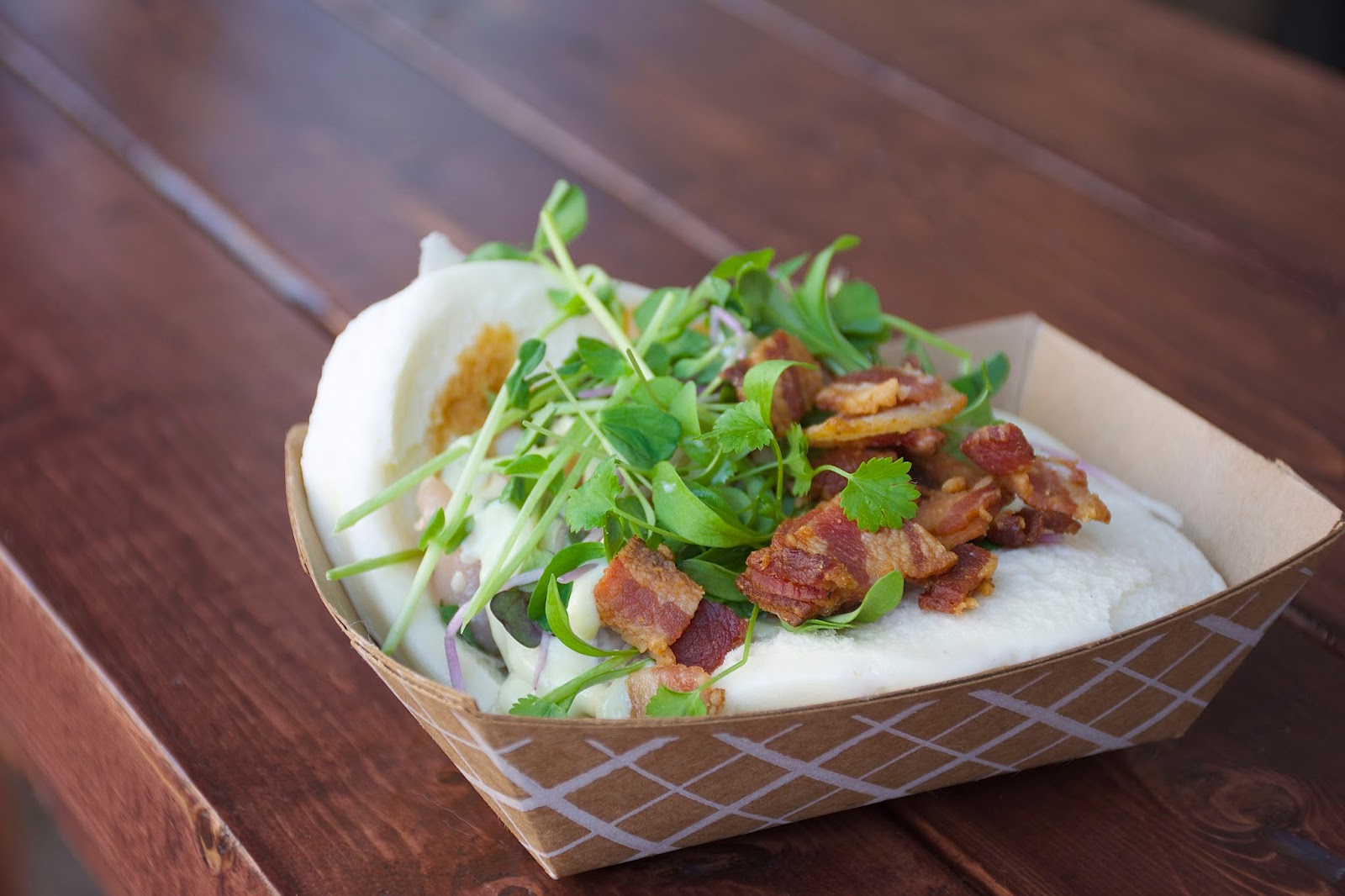 3/5 stars
Seared albacore tuna - very Vancouver indeed LOL. This was a really interesting combination of flavours - but they really made it work. You could taste all the different flavours in in bite, but the wasabi mayo was definitely the most overpowering. The wasabi was a little too strong for me - and it traveled up my nose and it burned LOL...
A bit of smokiness from the bacon came through - which added an crunch, and the cilantro on top helped brighten up the flavours. The sweet soy was glazed on the bun with added a nice saltiness. The tuna was encrusted with sesame seeds, and had a silky mouth feel. 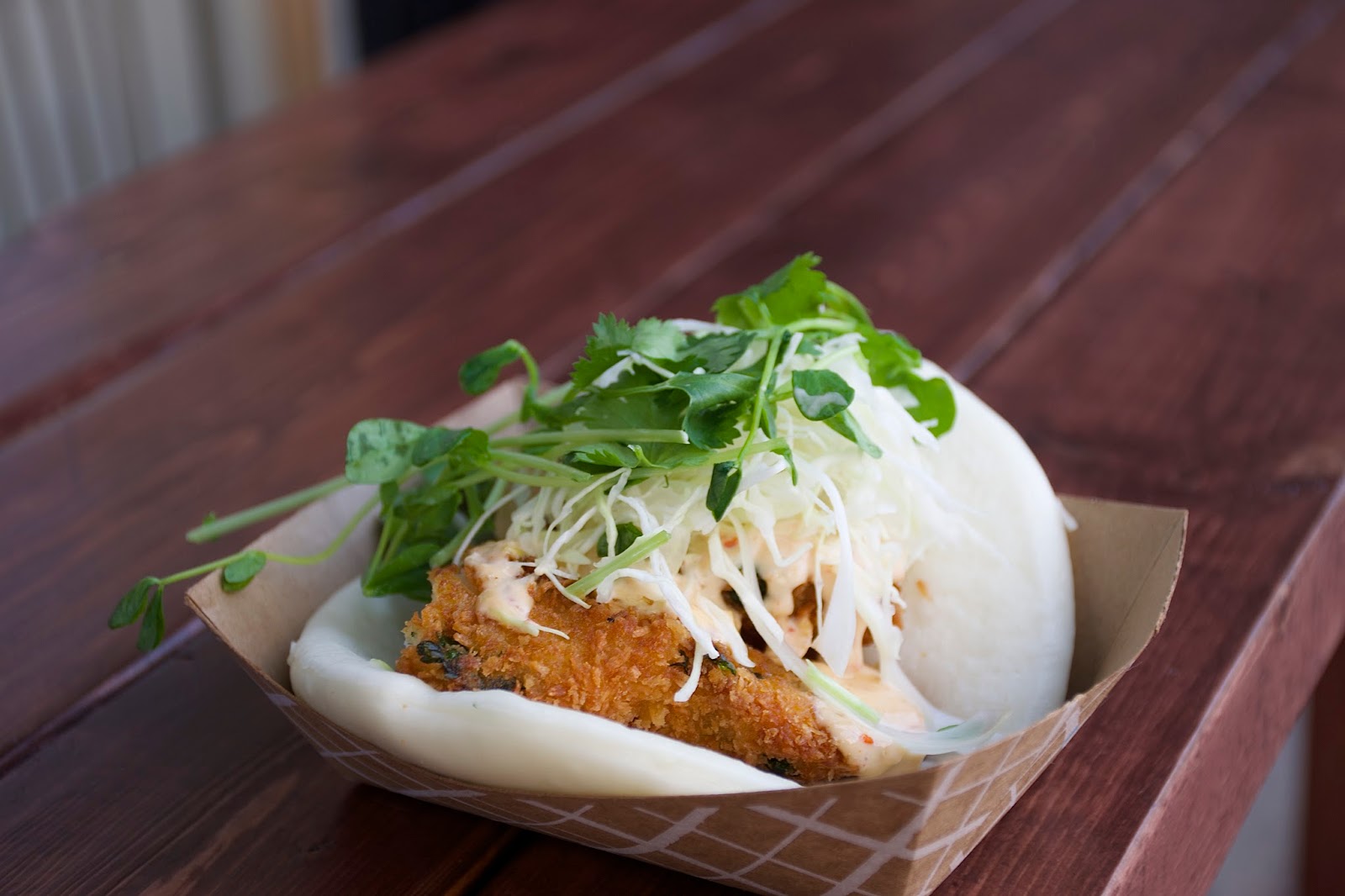 Wow - bao down is really hitting the ball out of the park with these flavours!! The jaws bao came with 3 huge pieces of fried up catfish! The batter they use is panko batter - similar to the kind they use on katsu, which renders the fish super flaky and moist!! The crust really did taste like coconut! I couldn't really taste much of the kimchi sauce though - because it was overwhelmed by the coconut flavour - but I could definitely pick up some sourness from the thai vinaigrette!! 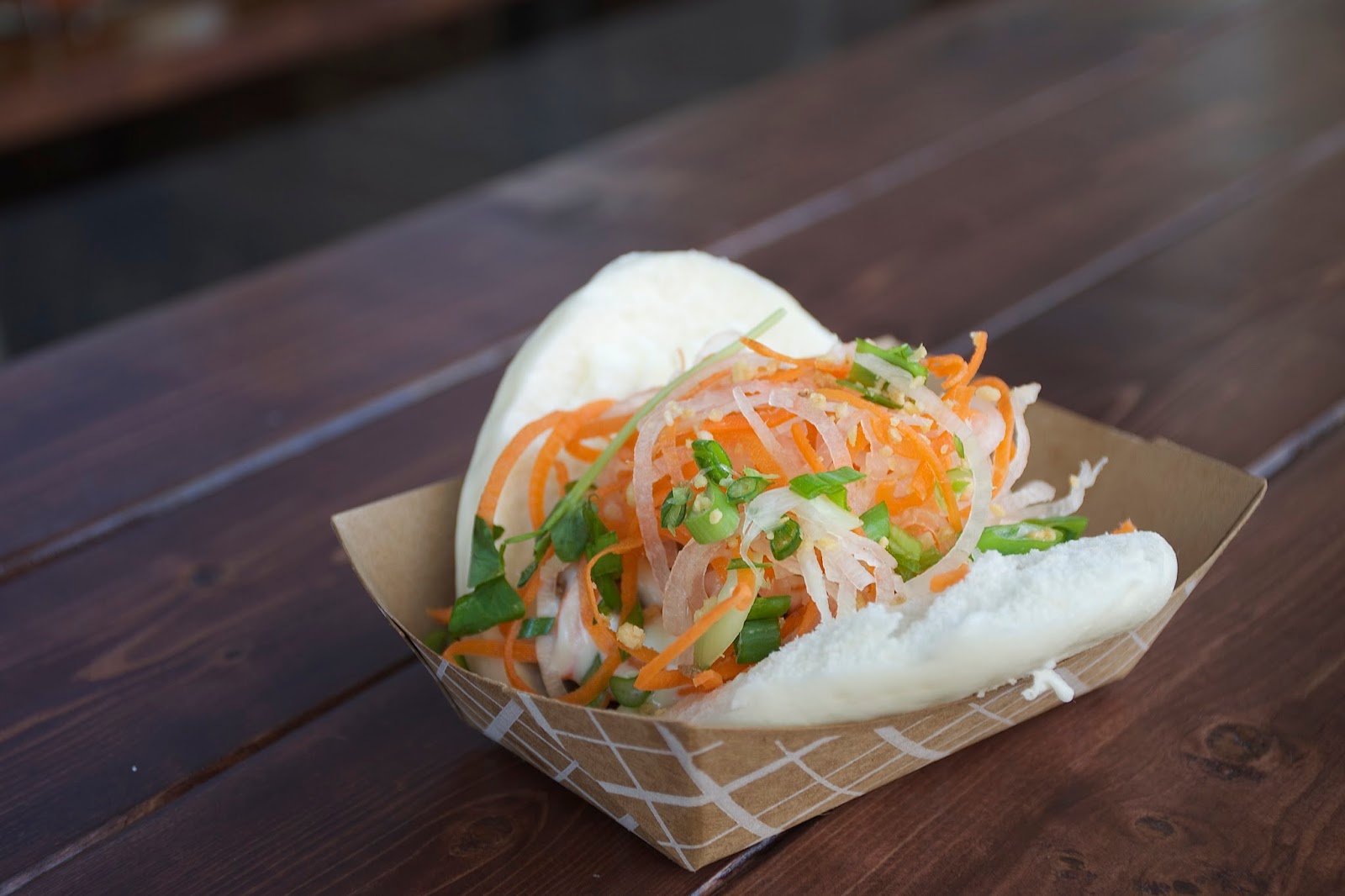 Uhs-uhs-uhs BOW CHICKA WOW WOWW (say that in slow motion) hehe, sorry I just had to! ;)
This was my favourite out of the bunch, and it wasn't just because of the name LOL ;) And it's their signature bao!!
This by far had the most POW WOW!! (okay, enough with the ows already Selina)

The flavours just worked together beautifully!! I was expecting it to be really heavy on the garlic - but it actually wasn't - the garlic flavour was actually pretty subtle - which meant no garlic breath after...yay!! I could taste every ingredient - but the mayo and fish sauce was definitely the dominant flavour - so I couldn't really taste any of the lemongrass, but it was still really good! :D 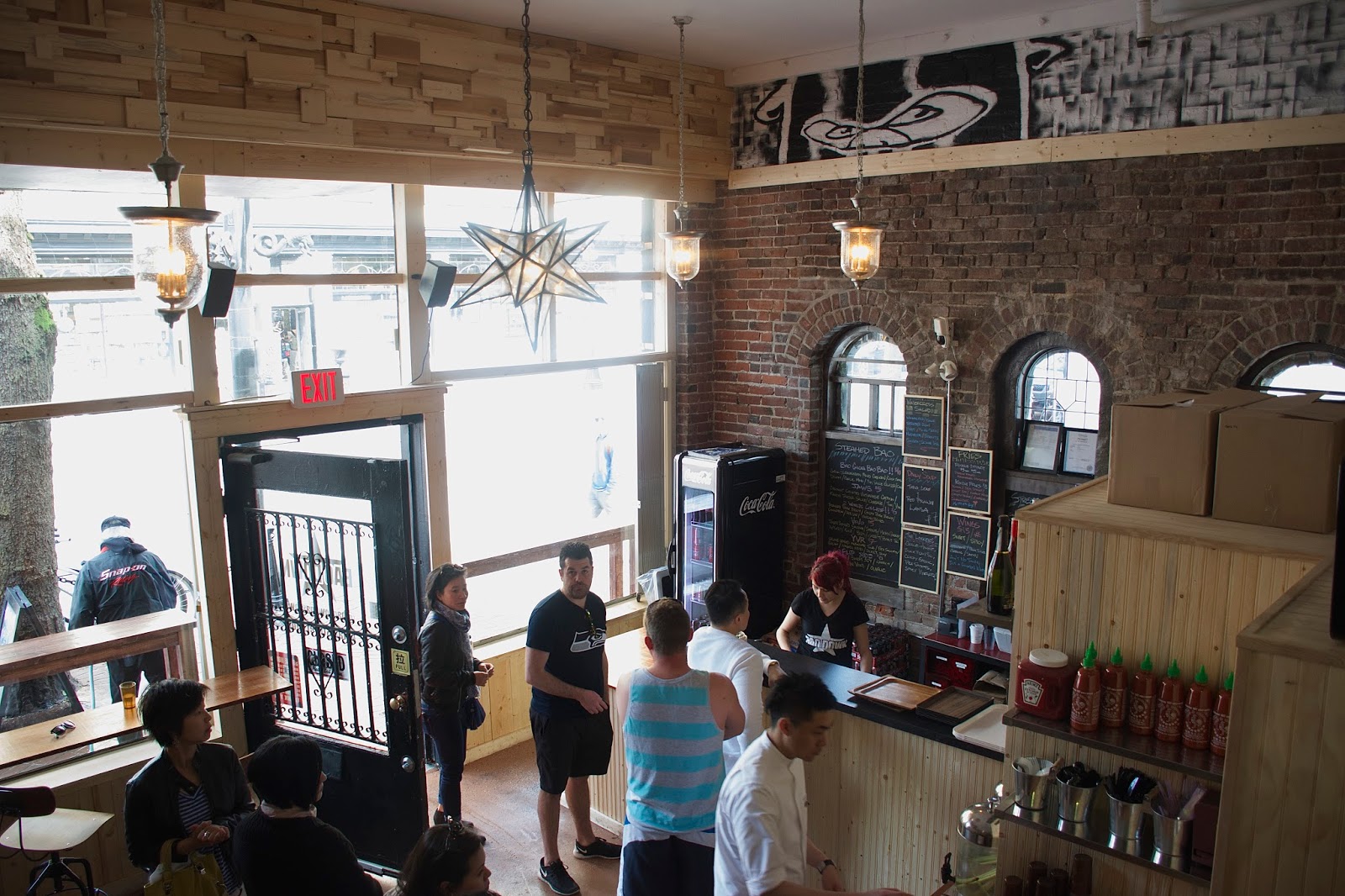 They have seating at the counter by the windows - but there's a second level with more seating upstairs!! :D