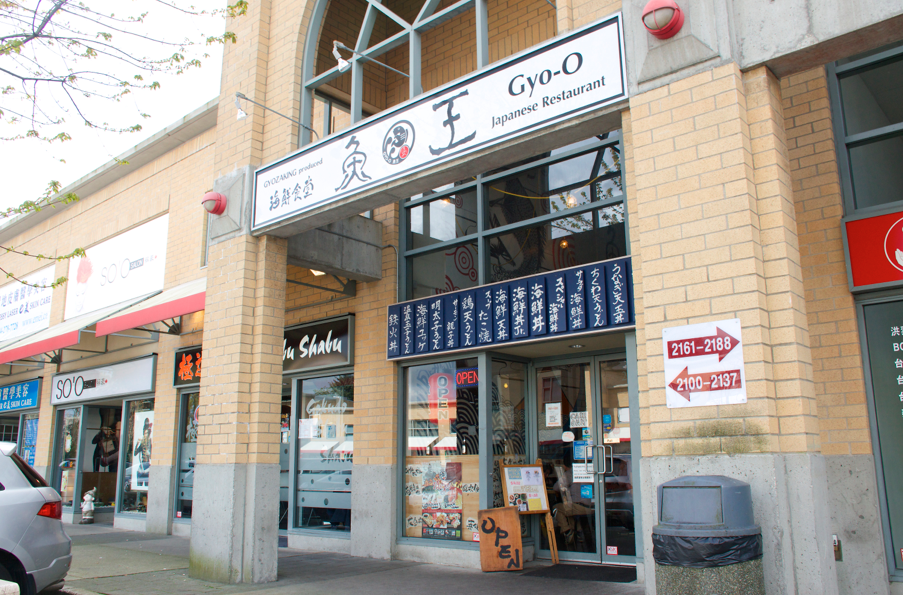 Today I stumbled across the strangest thing on Youtube (yes, I was in that weird part of Youtube again) ... have you guys ever heard of "Mukbang" Korean food shows?? People sit in front of a camera and you basically watch them eat for like an hour LOL...

Yes, such a thing does exist and the Mukbang community is alive and well...and hugely popular in South Korea!! (Is this what all the youngins are up to these days?!)

I find it fascinating really. And a tad bit creepy. But I can kind of see the appeal, watching someone eat is strangely calming (Did I just admit that? On the internet?)

Hey, maybe I should make my own mukbang!! JKJK...

Or Should I? (Are you serious Selina?!) ...just for fun hehe!! But you guys will probably be disgusted by my (quoting my dad): "gross eating habits" harhar

I "jokingly" suggested it to my dad, and after I told him how much money they make, he was like "Why aren't you doing that? Get on it!!" Wow Dad, you're encouraging me to feed peoples' fetishes? You're such a great parent!

And here's an example of a girl eating instant ramen:
https://www.youtube.com/watch?v=RX_nT1CKguw

ANYWAYS...let's get back to the actual post shall we?

Today I went to Gyo for lunch!! At most Japanese restaurants it's all about the sashimi, the toro, seared this and that, but at Gyo, it's all about the DON!! I love donburis...since I'm a rice bucket hehe ;)   There's just nothing like tucking into a bed of warm rice!!

Gyo is actually part of the Gyoza King group (instant credibility lol) so this place is insanely popular. Their menu is really extensive, they have a huge selection of fish/cooked donburis, ramen, udon, and tapas dishes!! Every time I come here I get the worse case of indecisiveness!!

Their ramens are also really popular, they have a ton of cool flavours like butter miso, clam, lobster, etc. So yea, do yourself a favour and go check them out! Gyo is just a short 5 min walk from the Aberdeen Canada line, so you really don't have any excuse not to ;)

Oh, and on top of their yummy food, the service is awesome! The staff don't speak much English but they're super friendly, accommodating, and they seem genuinely happy!! I had a question about the menu and since the waitress couldn't understand my question another guy came and answered my question - and they were super friendly about it! :D They had the Japanese eating contest "OOGUI" playing the whole time! Hey, I'll let you guys in on an embarrassing secret - my dad and I actually watch Oogui all the time at home on the Japanese channel LOL (it's one of our guilty pleasures hehe.)
Yes...I have a thing for food related entertainment, can you tell? ;) 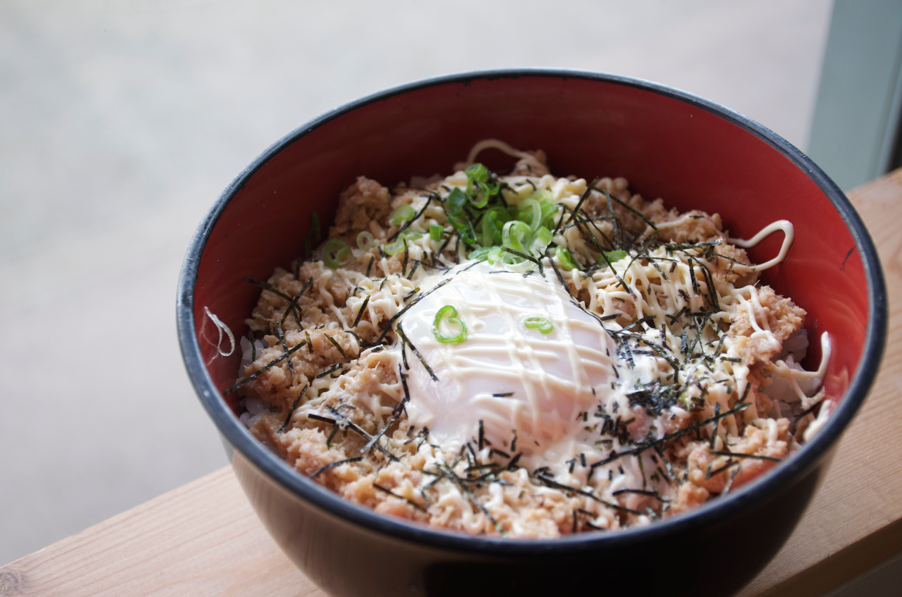 Tuna Mayo Don $9.95
3/5 stars
Basically an asian version of a tuna sandwich hehe!! The tuna wasn't fishy tasting at all and the japanese mayo made the dish delightfully sweet, and the seaweed added a ton of flavour! The egg was perfectly runny and mixed with the mayo, it was really yummy combination! The rice however was a bit too wet for my liking (probably from all the ingredients on top.) 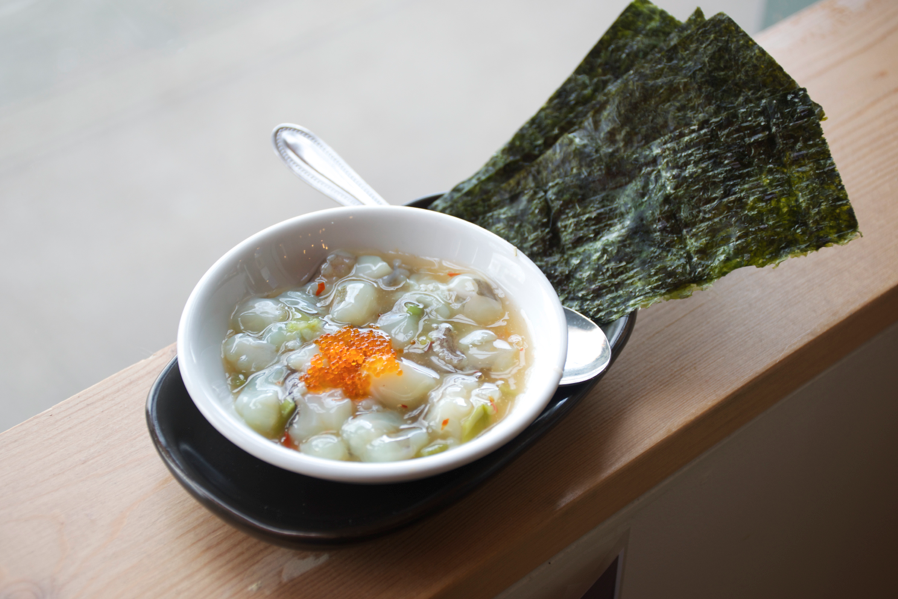 Tako Wasabi $4.50
3.5/5 stars
This was yummy but the wasabi was just a little too strong. Just a little. Okay, I know this dish has "Wasabi" in the name for a reason LOL but I have a low tolerance for spicy foods. The squid was really good though, chewy, and flavourful, and I loved the fish roe on top! 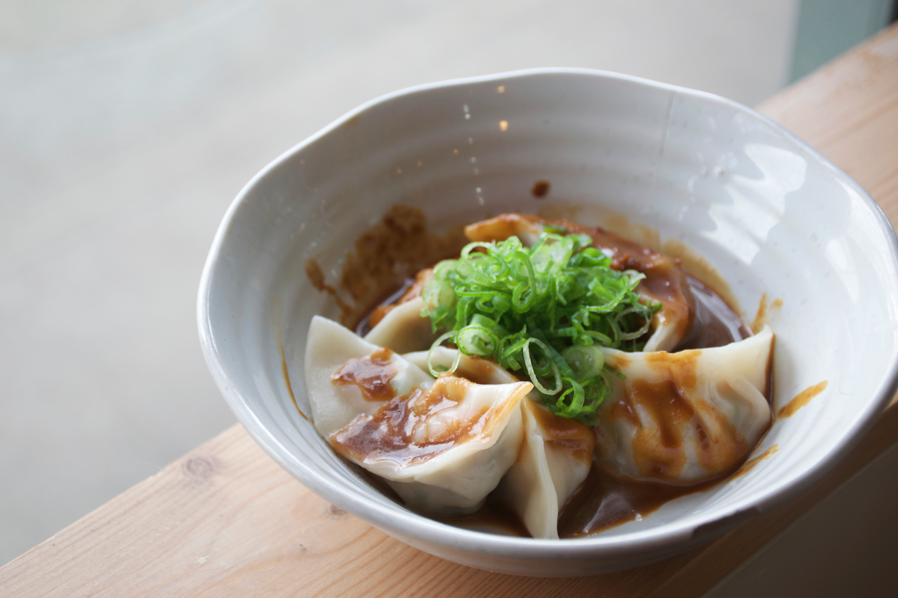 Sesame Miso Shrimp Gyozas $6.50
2.5/5 stars
This was okay. I thought the gyozas would come out pan fried but instead they were steamed! The sesame flavour was really strong, with a hint of miso. The filling inside was a bit lacking though, the shrimps were juicy but the gyoza itself was quite bland. The skin was also a tad bit thick for my liking.

Here are a few dishes I ordered a couple months back - clearly I didn't know how to take proper photos back then LOL...so sorry for the bad quality! 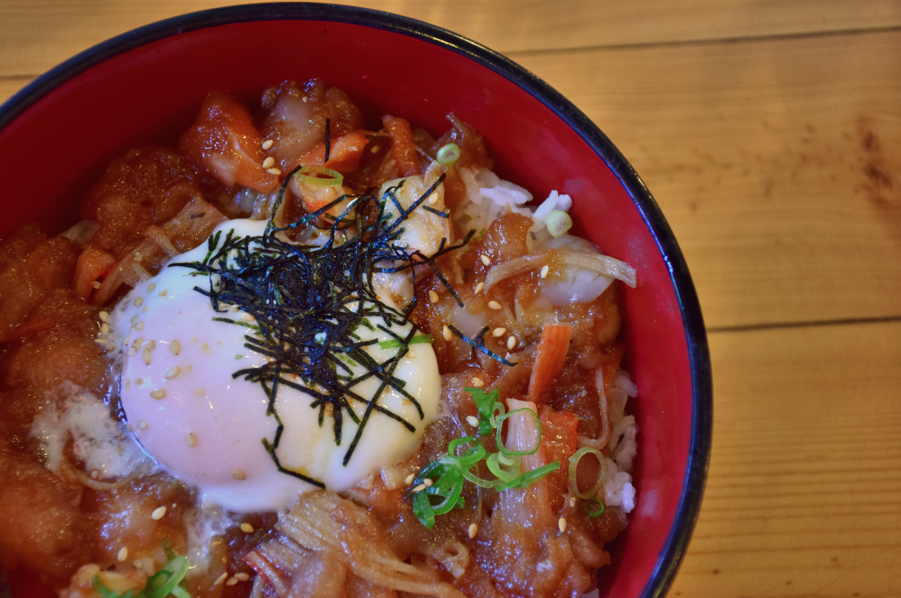 4/5 stars
This is the most popular item on the menu!! And yes, it's a crowd pleaser for a reason, this stuff is awesome!! They marinate the fish in a DELICIOUS house made sauce that's sweet, savoury, seaweed-y with a wonderful unami flavour!! The gooey egg just makes it that much better. They also give you a ton of rice so it ends up being a really filling meal! 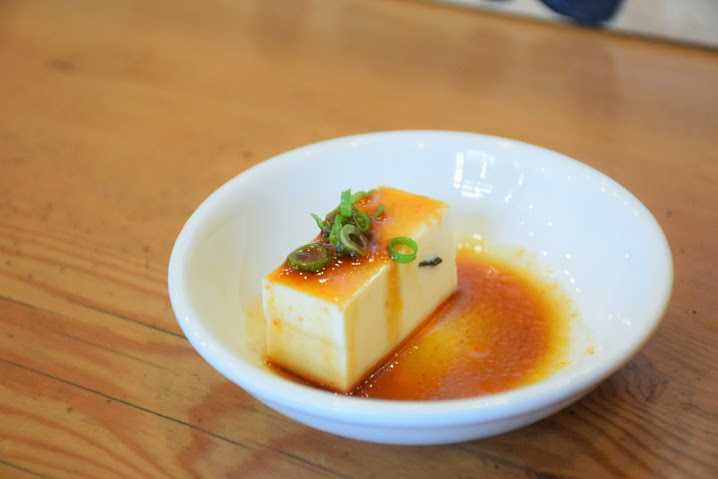 Complimentary Tofu
3.5/5 stars
That time I also got some complimentary tofu, which was a pleasant surprise! The tofu was silky smooth and their sweet house made soy sauce just made it that much better! 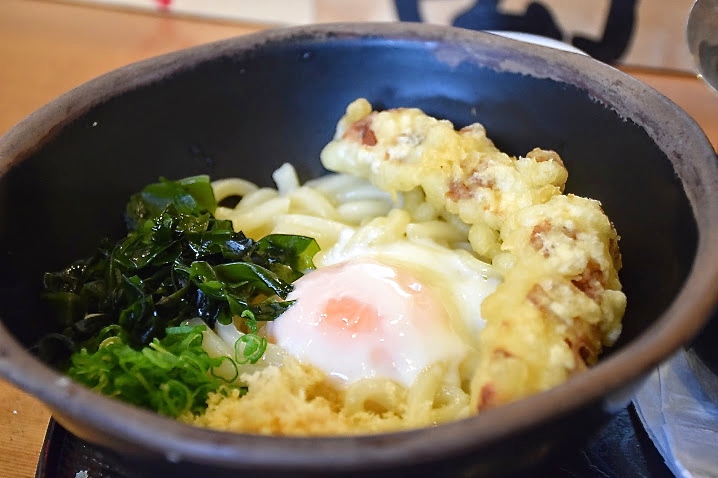 3.5/5 stars
Another time I also tried their annake sauce udon, and it was really interesting! They give you a jar of thick sweet sauce to pour on top of the udon, which gives it a wonderful amount of depth and flavour!! For the toppings I went with their chikawa tempura (which got a little bit soggy from string in the hot udon- but it wasn't a big deal) The udon itself was al dente and chewy! 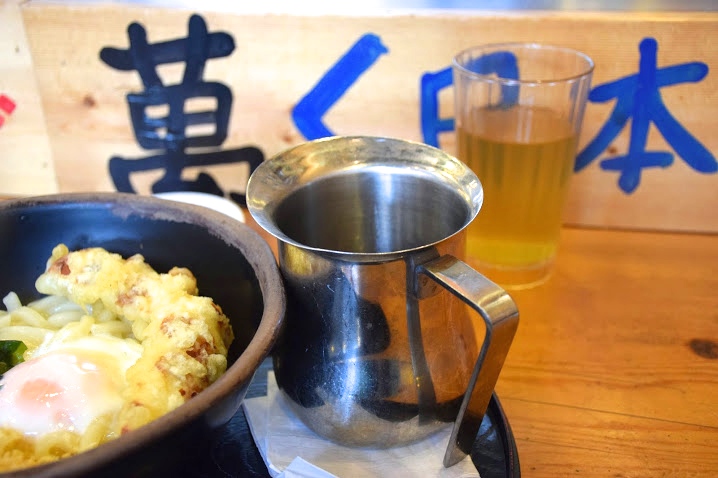 They give you a ton of annake sauce for your udon! :D 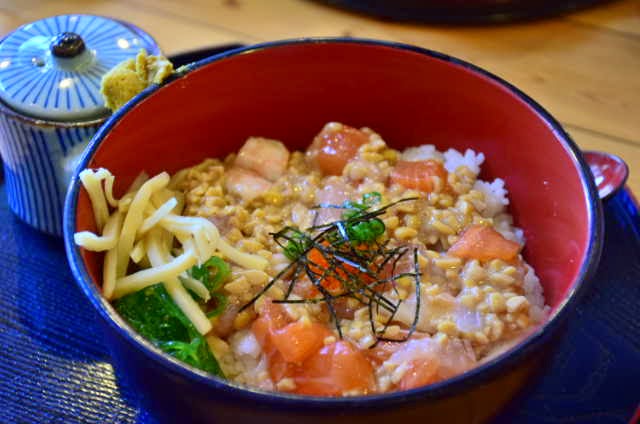 Sidenote: Can you guys believe this was taken with the same camera as the first tuna mayo don picture? Yea, it just goes to show it's not about having a fancy camera (though it helps) but it actually depends on the photographer's own skills!! I've definitely improved hehe, don't you agree? :D

4/5 stars
On another occasion I had a natto salmon don, and it was again, awesome! Actually, it was probably my second time having natto. It's definitely of acquired taste, it's not something everyone can tolerate...but I love it!! I just adore the pungentness and the bitterness of the beans! 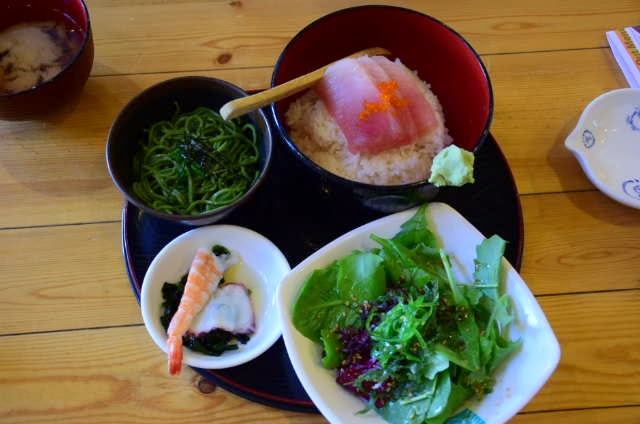 Lunch Set $9.50
3.5/5 stars
That time my dad also had a lunch set, which came with cold noodles, a mini tuna don, a side salad, and a little ebi sumono! Everything was really well executed, but the portion size was on the smaller side, so definitely get a full sized don if you're looking to get your fill! 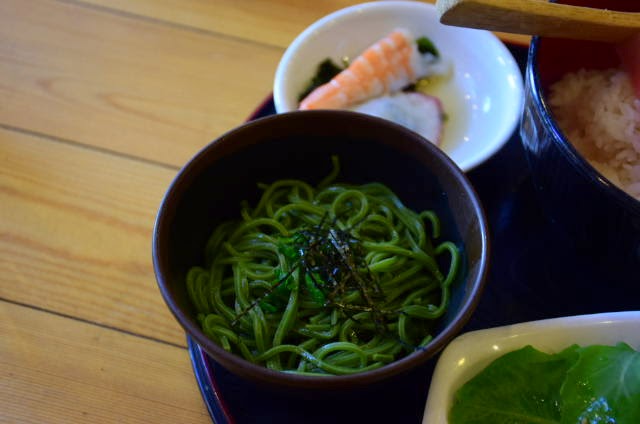 Cold Noodles
3.5/5 stars
The noodles were great! Chewy, al dente, and with bite! There was a lovely light vegetable flavour which was really refreshing! 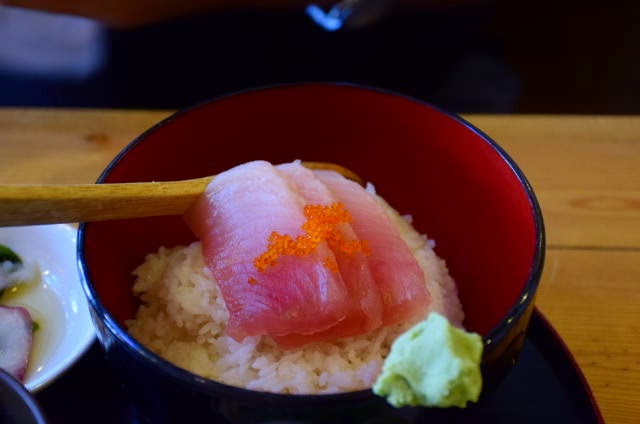 Tuna Don
3.5/5 stars
The rice on this particular don was great because it didn't get soggy!! The grains were firm, separated, and nicely *qq* The tuna tasted fresh, and the fish roe on top was a nice addition! 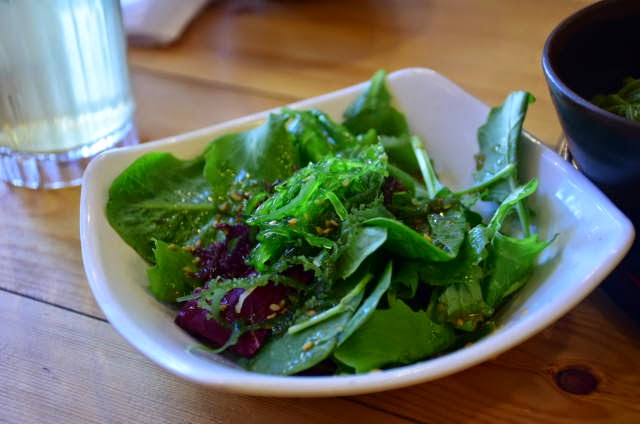 Side Salad
3.5/5 stars
This was a really good salad, you can tell just from looking at the picture!! They definitely don't cheap out on the greens, and I love how they included kelp and sesame seeds in it! 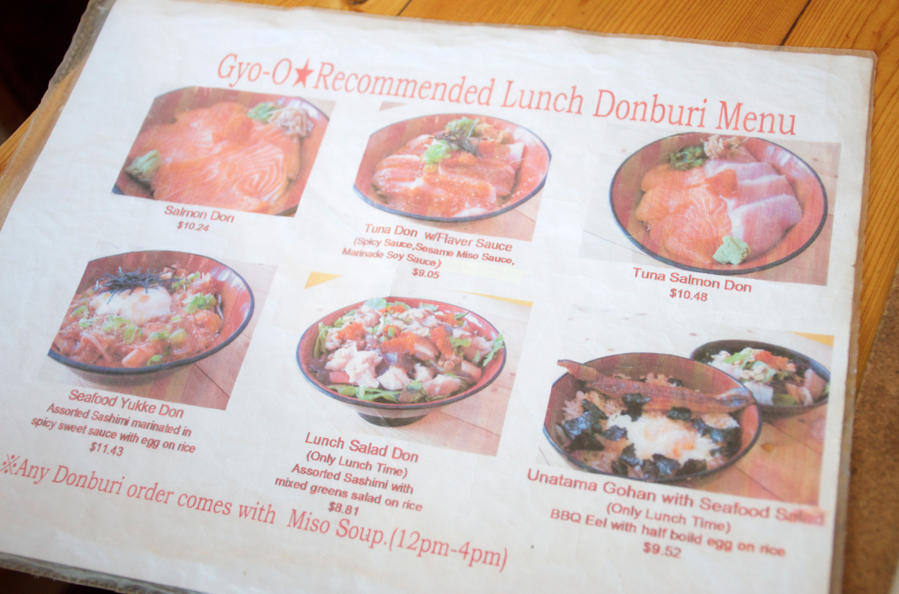 Here's a small peek at their menu...you can find their full online menu here:
http://gyo-o.com/new_menu.html 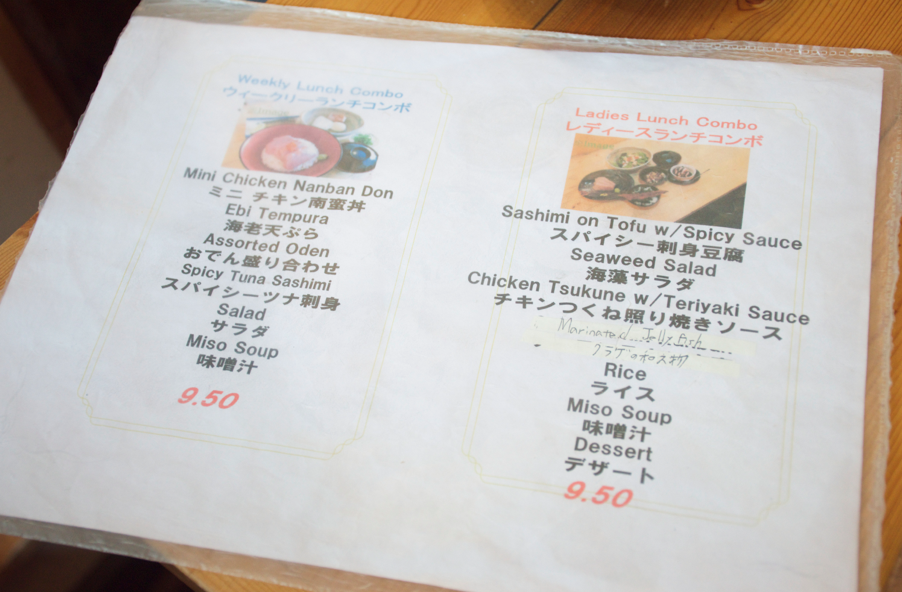 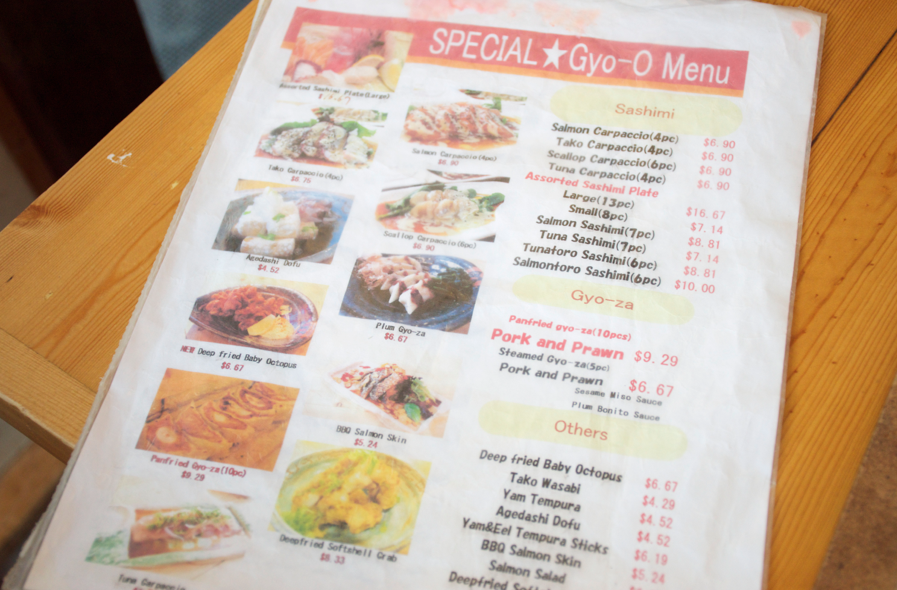