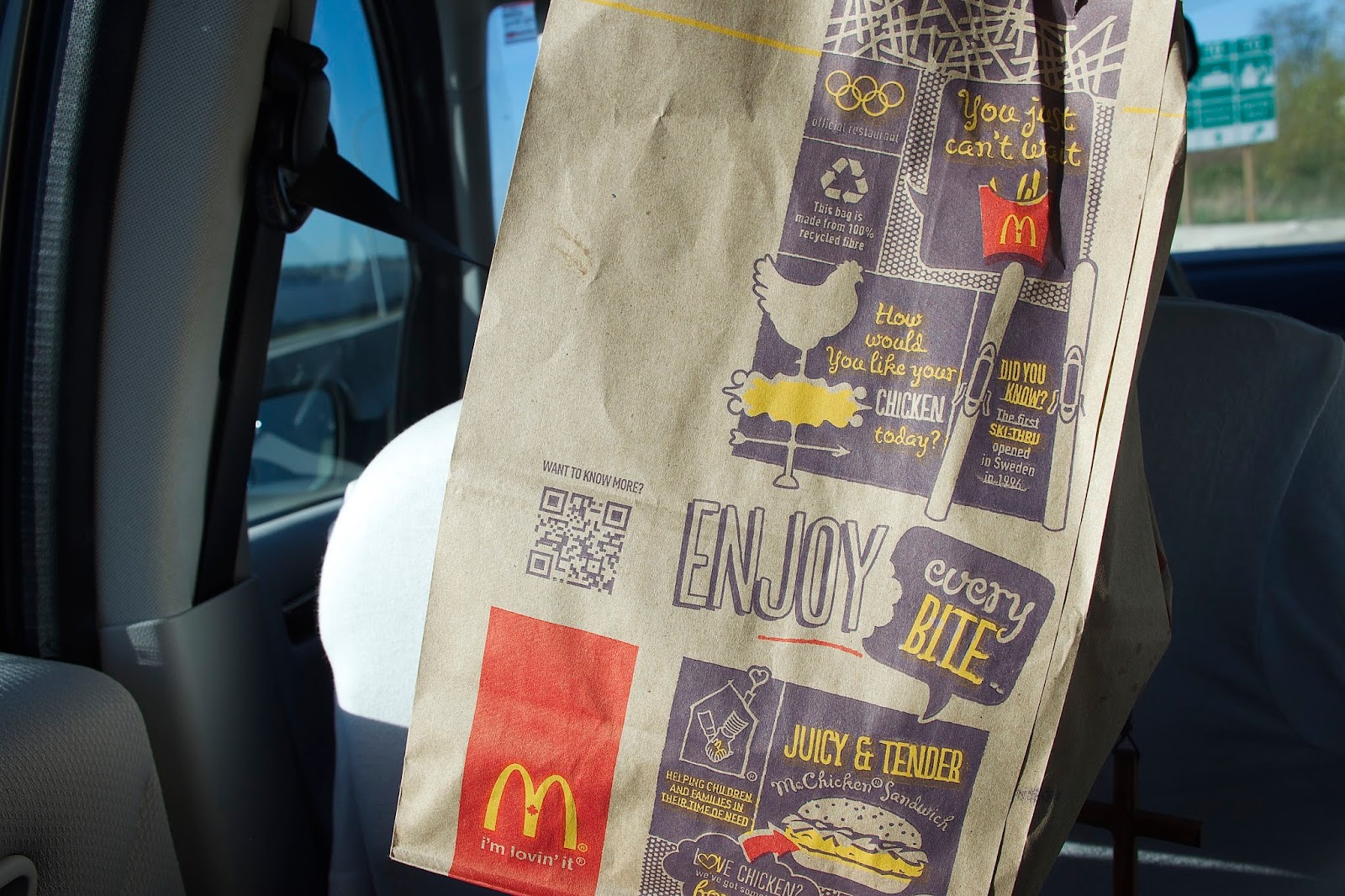 I haven't gone through a McDonalds drive thru in 5 years!! Omg...I actually wrote "drive through" LOL. That just goes to show how much of a McDs noob I am!!

But yesterday I had my class 5 road test at 10:15 am, so I had to get a quick breakfast in my internals before driving!! So we went with McDonalds, out of pure convenience (plus, I had a coupon to use up) The coupon was for a breakfast meal deal which included a breakfast sandwich, a hot drink, and a hashbrown, all for $3.95!!

The last time I ate in an actual McDonalds was in 2013 (around the time I started this blog) and I just about vomited after eating a "deluxe" cheeseburger LOL. But don't get me wrong, I don't have anything against fast food, some places are actually pretty good (take Churches, Wendy's or A&W for example) but for some reason, I've never taken a strong liking to McDonalds!! Okay, okay, I have to admit, I like their fries...and their mcnuggets hehe. (Am I committing a cardinal foodie sin?)


The struggle of taking decent food photos in a moving car is all too real LOL...especially when you're trying to balance hot food in one hand and a heavy dslr in another! The people in the car next to me probably thought I was crazy!! Oh...the things I do for this blog!!

Oh and Mcdonalds, your bag is full of LIES, I did not enjoy every bite!! ;) 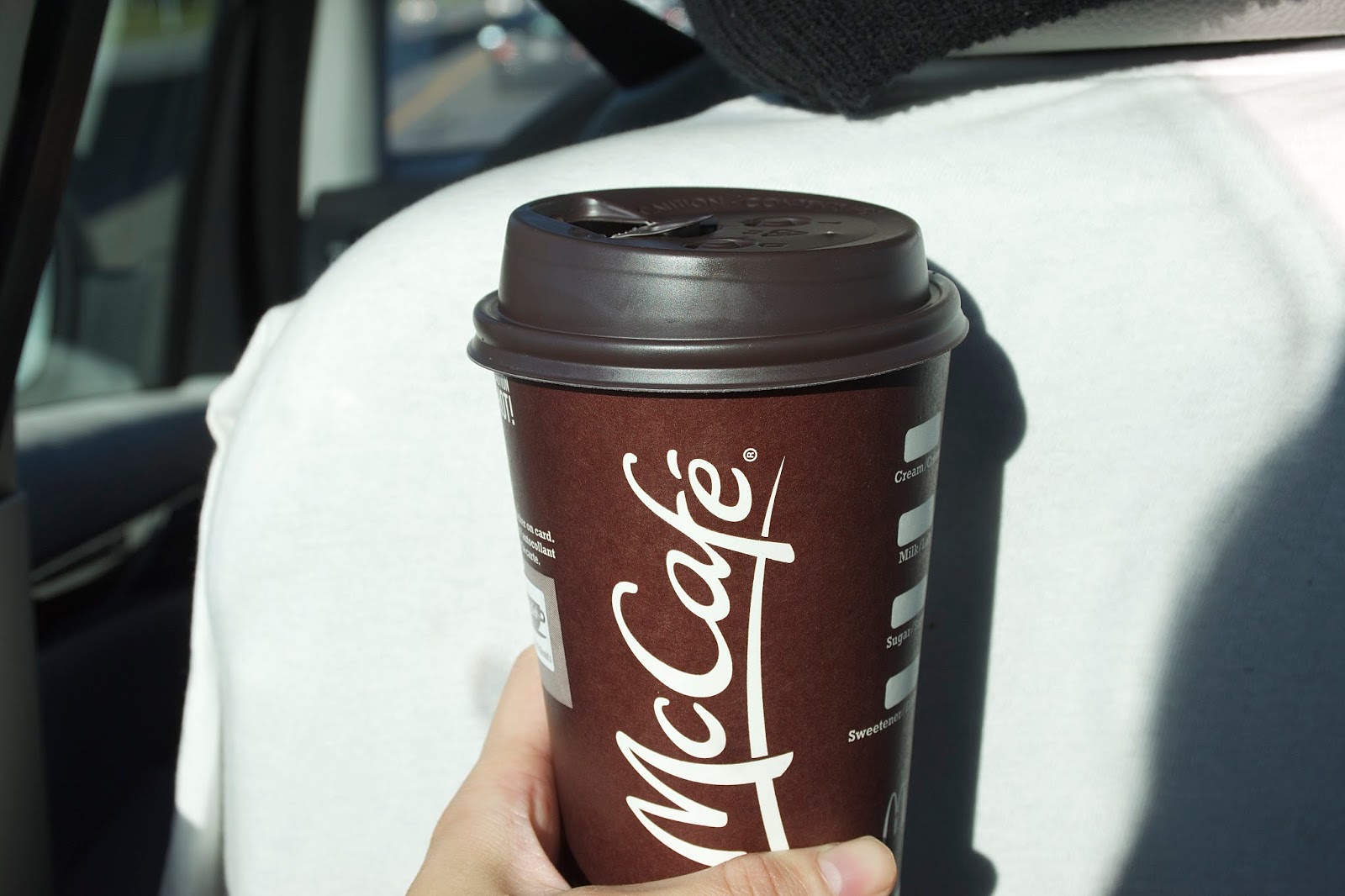 My dad had a medium sized double double (can you say that even if you're not at Timmy's?) and I had a large earl grey tea! The earl grey was surprisingly good, it tasted (and smelled) EXACTLY, and I mean exactly like a lush store!! You know what lush smells like right? Yea, it was basically lush, in a cup lol! So yea, I enjoyed it! :D 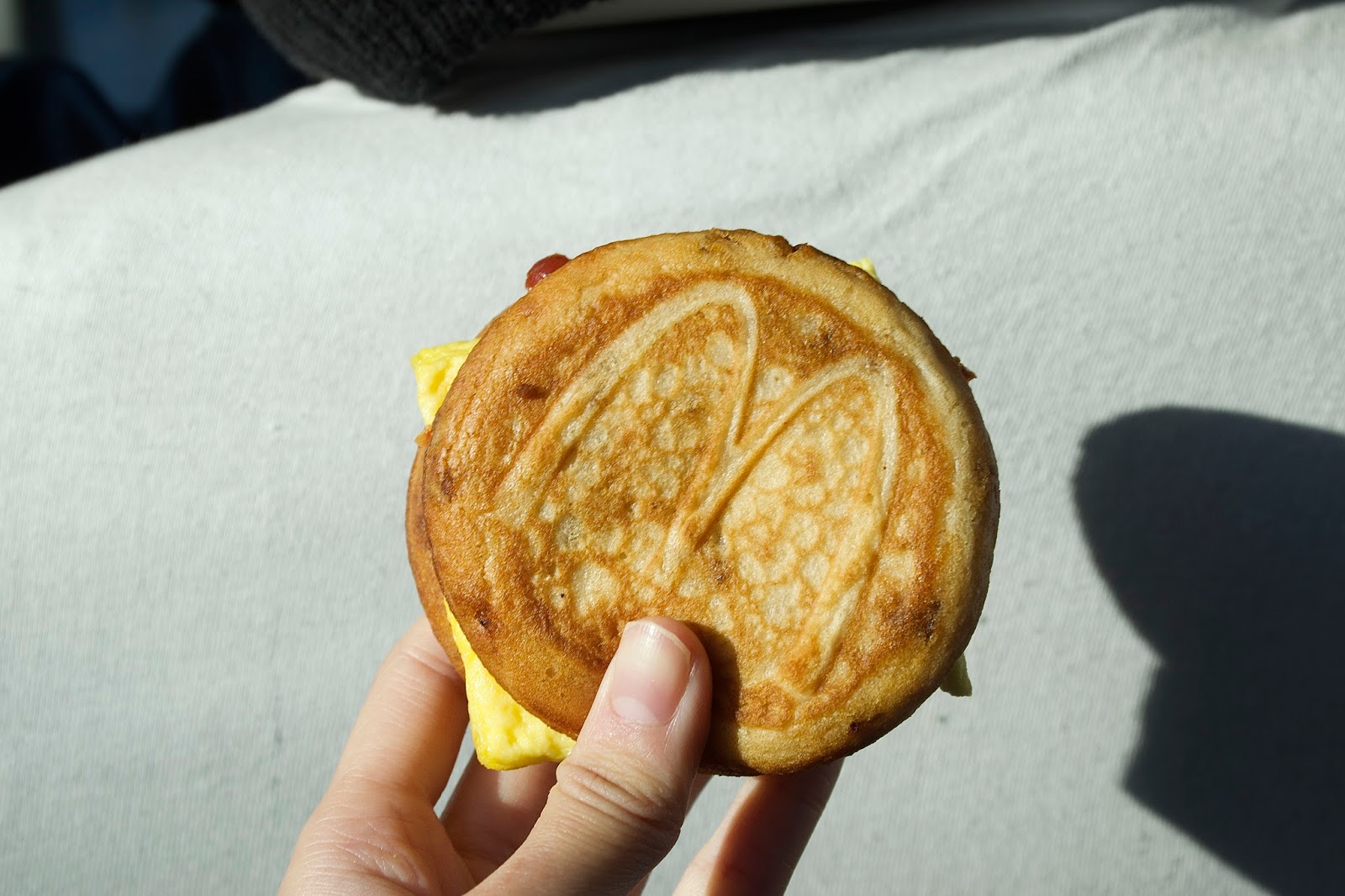 McGriddle
w/ Maple Syrup Flavoured Pancakes, Egg + Bacon + Cheese
1.5/5 stars
This was really good in theory. The execution though, not so much. The McGriddle is essentially a breakfast sandwich made out of two maple syrup flavoured pancakes...which actually sounds like a really good combination lol. But I bet if you made the same thing at home using wholesome ingredients it would taste SO much better!!

I definitely prefer the mcmuffin haha, I actually like the mcmuffin alot more, because the egg isn't  all rubbery and powdery tasting!! 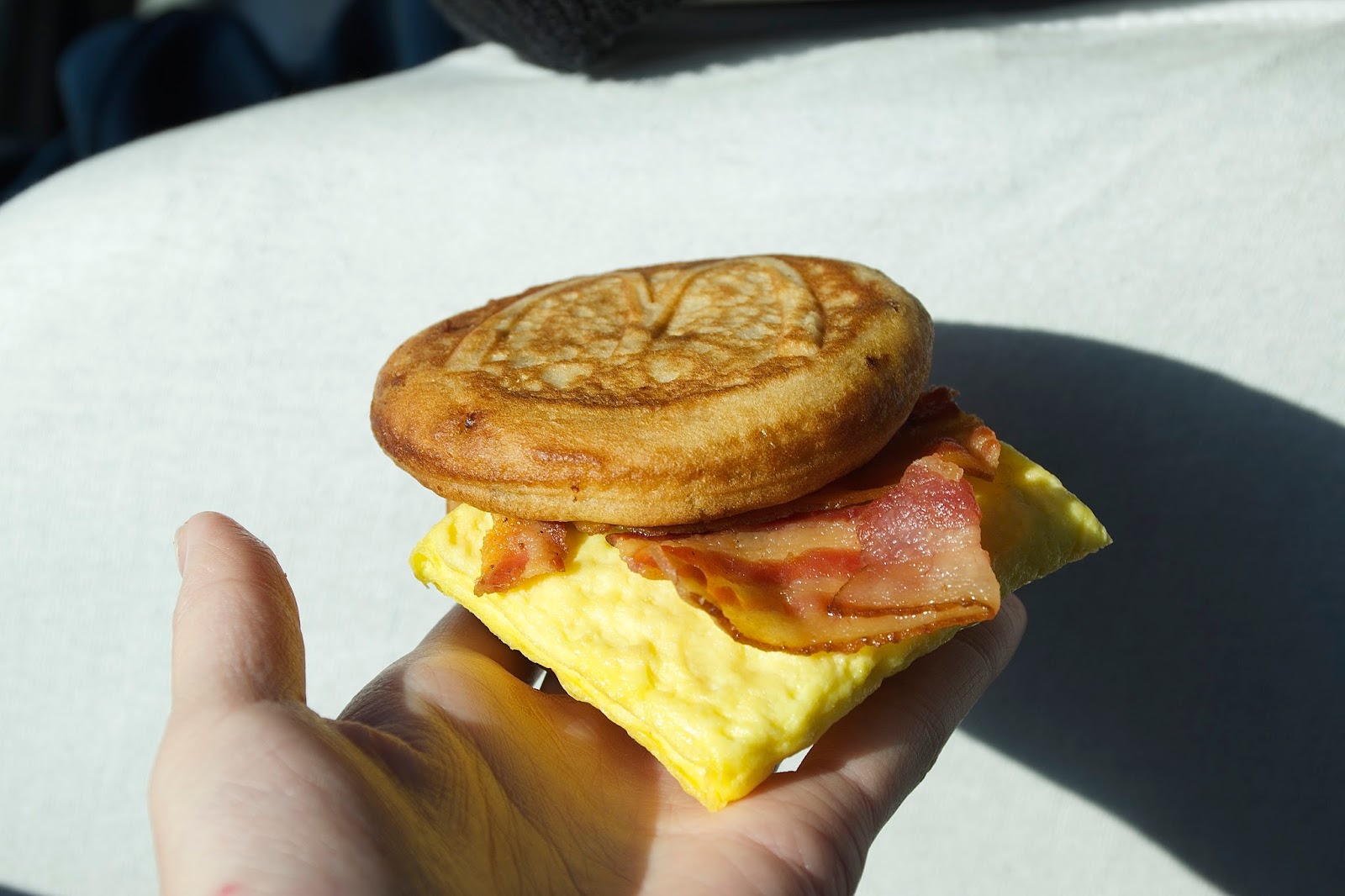 The egg was really weird, it was molded into a square shape which made it look really unappetizing, and on top of that, it was NEON yellow!! And the bacon...wow, that is a sad looking piece of bacon isn't it? Flat, greasy, and hard haha. 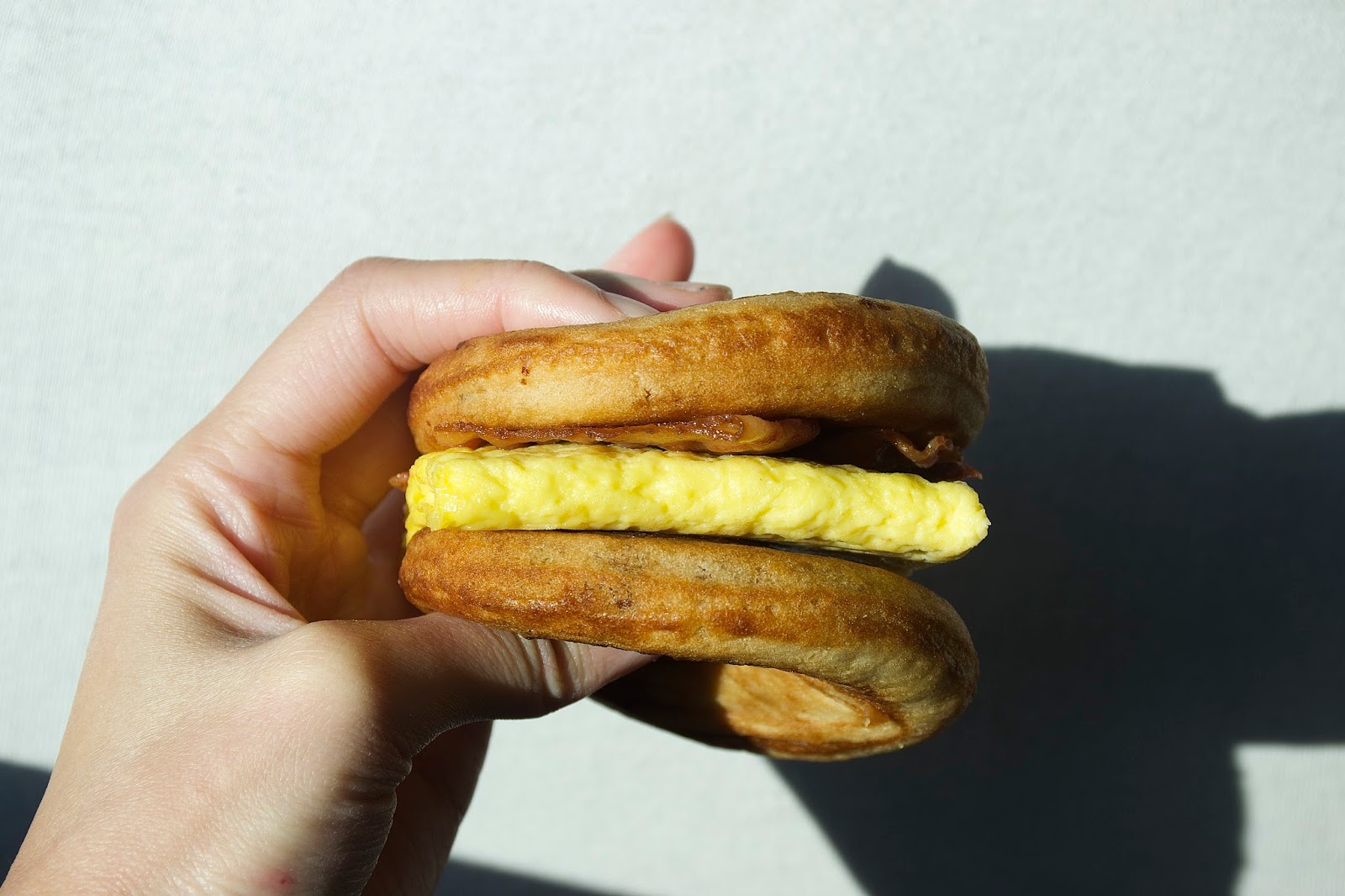 Though I did enjoy squishing it hehe. That was fun!! ;)
The pancakes themselves were half-decent: I could definitely taste the maple syrup and there was even bits of raisin in it! 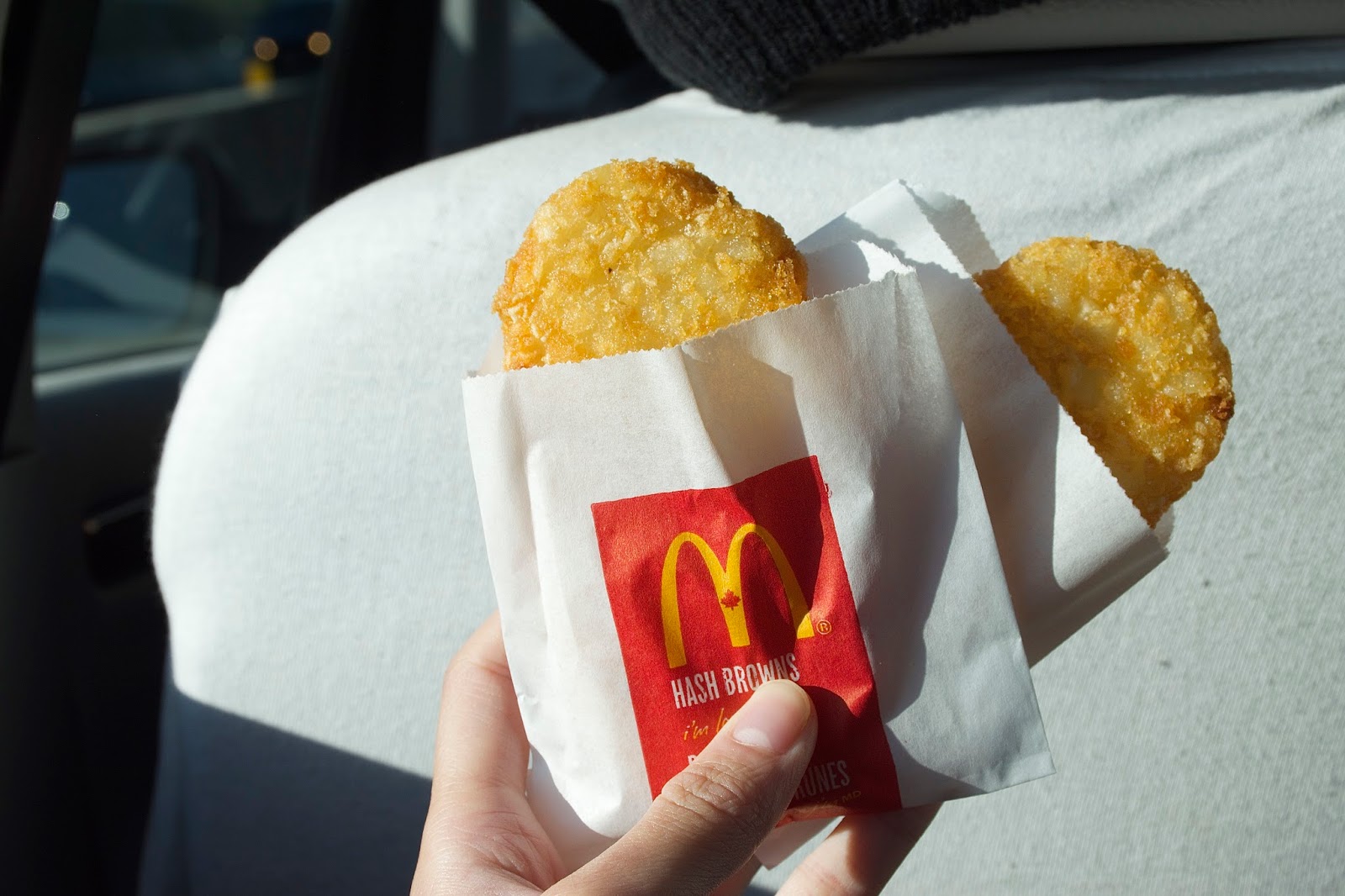 And of course...you can't go to McD's without having some of their hashbrowns now can you?! And...they forgot to give me ketchup, but by the time I realized it was already too late LOL!! Dang it!! I should start carrying portable ketchup packs on me hehe! ;) 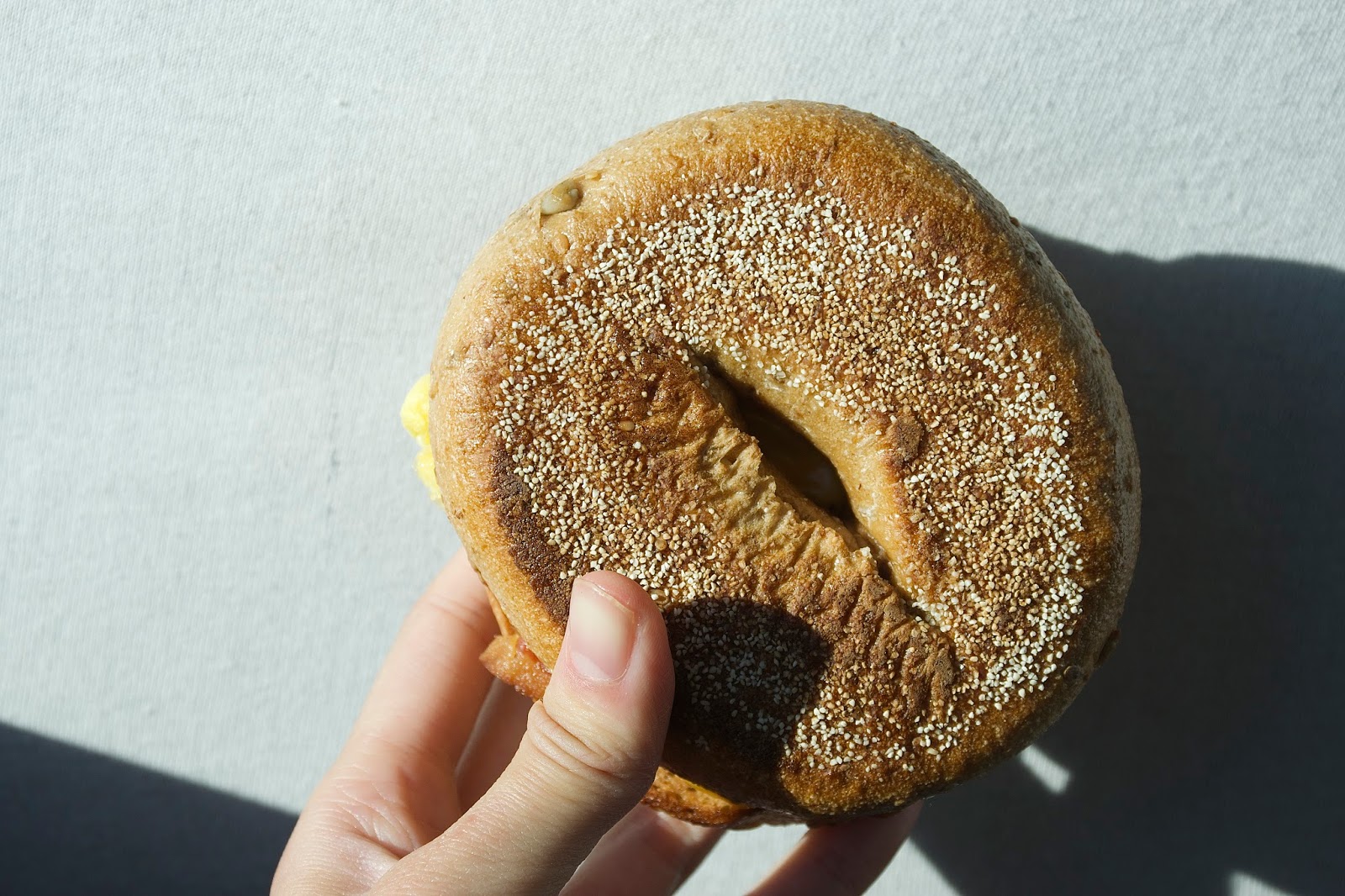 Yes, I do realize the bagel is backwards LOL. But from the back, the bagel looks pretty decent, no?

My dad had the breakfast bagel, and he said it was pretty filling!! It was lightly toasted which made it a bit hard around the edges though. The filling was essentially the same as my mcgriddle, nothing too enthusing, same blah, rubbery egg! 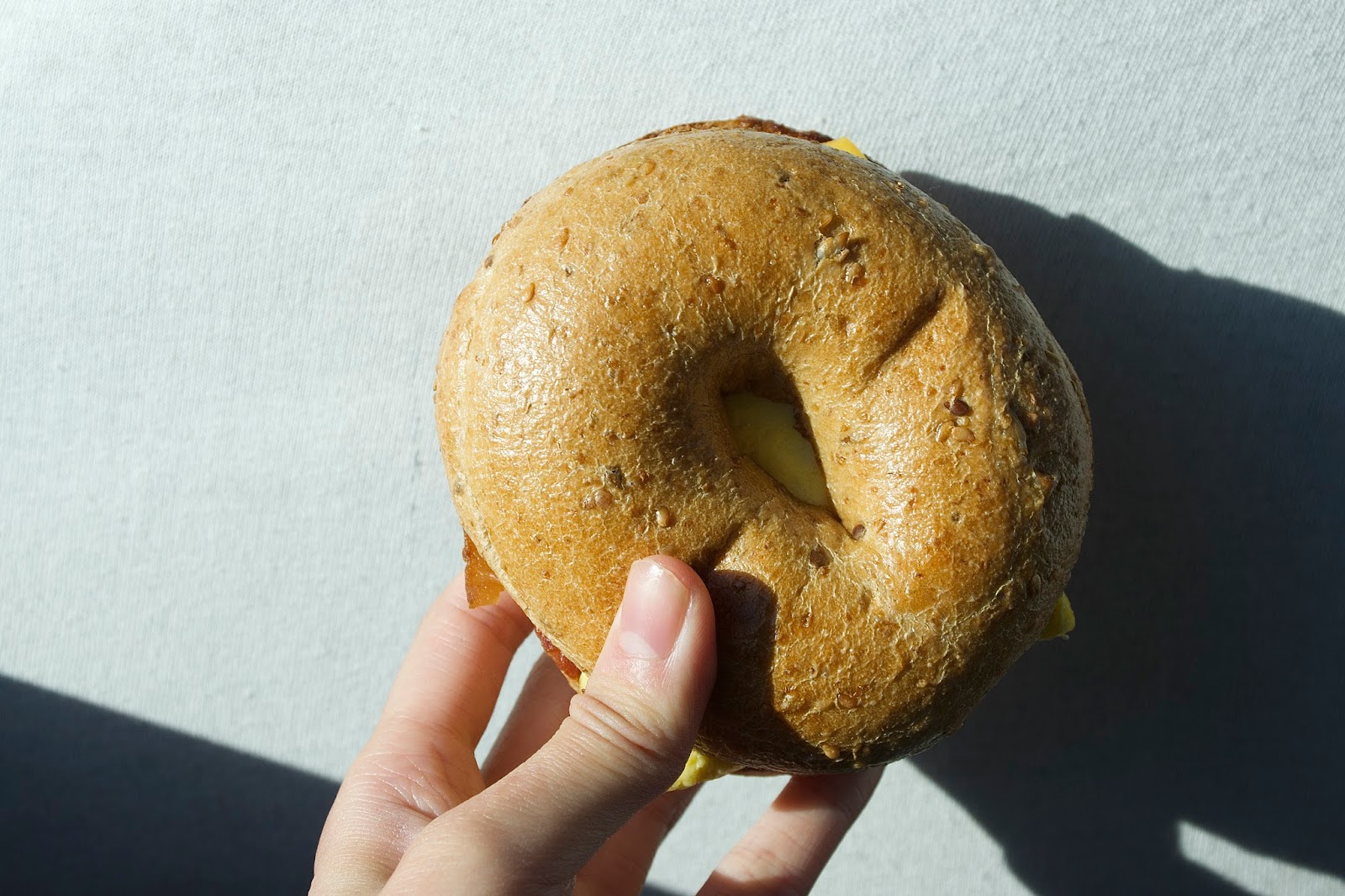 Some sesame seeds would have made it alot better!! :)