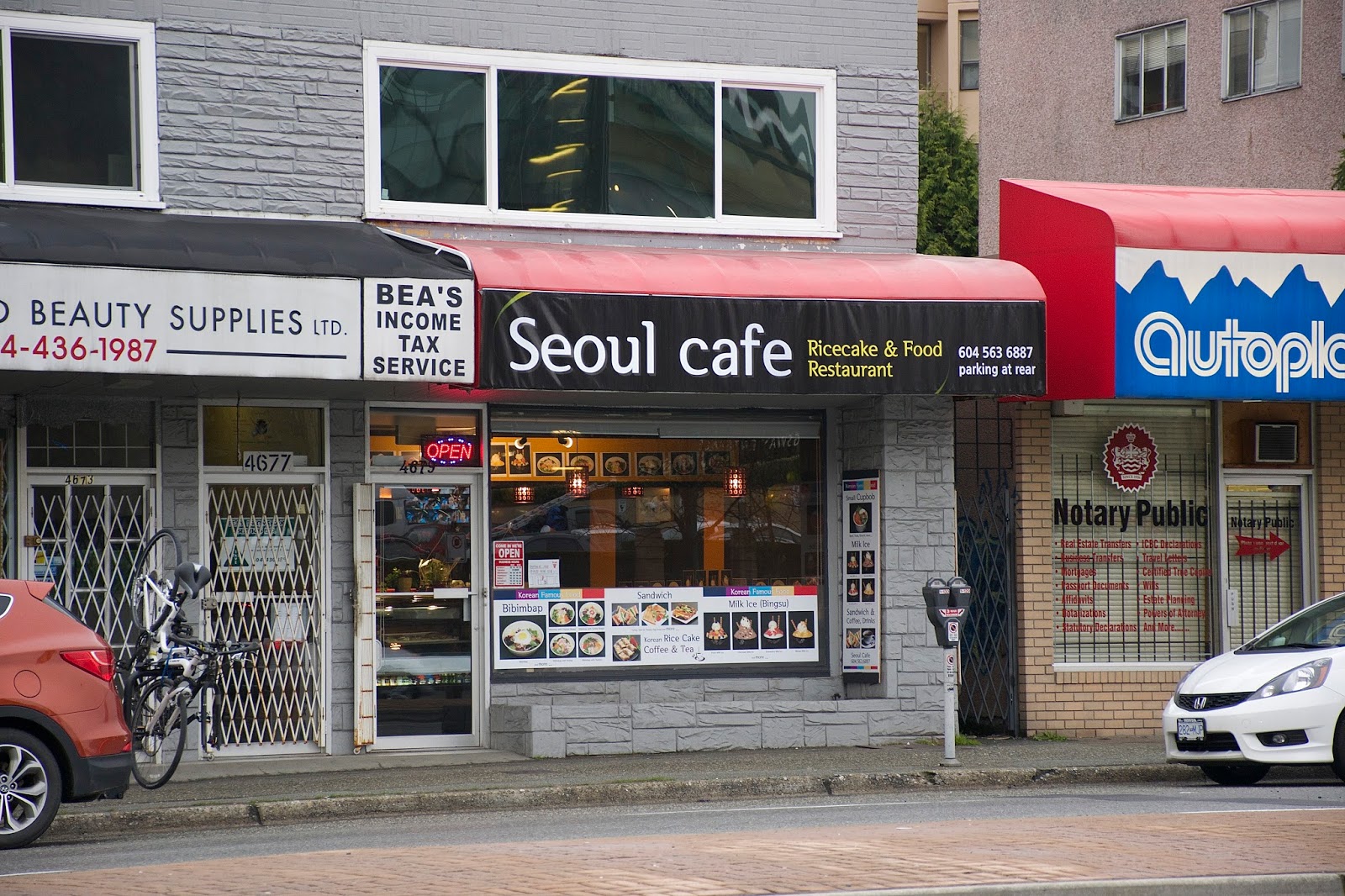 Hey look!! A new restaurant just opened up across from Metrotown!! I hang around the Mo'town area a lot (since I use to live there, my mom still does!) I've actually been eyeing this place since it opened, and today I finally dragged my mom with me to Seoul Cafe, since it's so close by!! This place hasn't been reviewed yet, so I was pretty excited hehe. I have a feeling this place is going to BLOW up as soon as people start finding out about it LOL. So don't tell anyone kay? It can be our little secret ;)

This place is seriously the cutest little cafe ever!! Seoul Ricecake Cafe is run by a pop&mom duo, the mom takes your order, and afterwards they both start making your food!! Super homey and cute!! :D  The restaurant itself is super tiny, it can only seat about 10 or so people!!

They're located right across from Superstore, a few doors down from Sushi Garden!! So the next you think about lining up for half an hour for mediocre sushi, think again ;)

For a Korean restaurant, this place is pretty darn cheap, considering how pricey korean food can get in Vancouver. (Scroll down for their menu!!) Seriously, rice bowls start at $4.99, and the kimbaps start at $3.99!! So we took full advantage of the low prices and ordered 4 dishes to share hehe (and we weren't even that hungry!) :D

Their kimbaps would make a great smuggling-into-the theatre snack LOL (don't pretend that you don't smuggle food into the movies!!) Popcorn is so overpriced (and it's not that even that good!!)

If you look at the photos (below) you may notice that it looks like I was outside...that's because I was LOL!! I took the dishes outside and started taking pictures of my food in front of the restaurant (totally normal I know) The people passing by probably thought I was crazy!! Hey, food pics look better in natural light kay?!
...the things I'll do for a good picture. 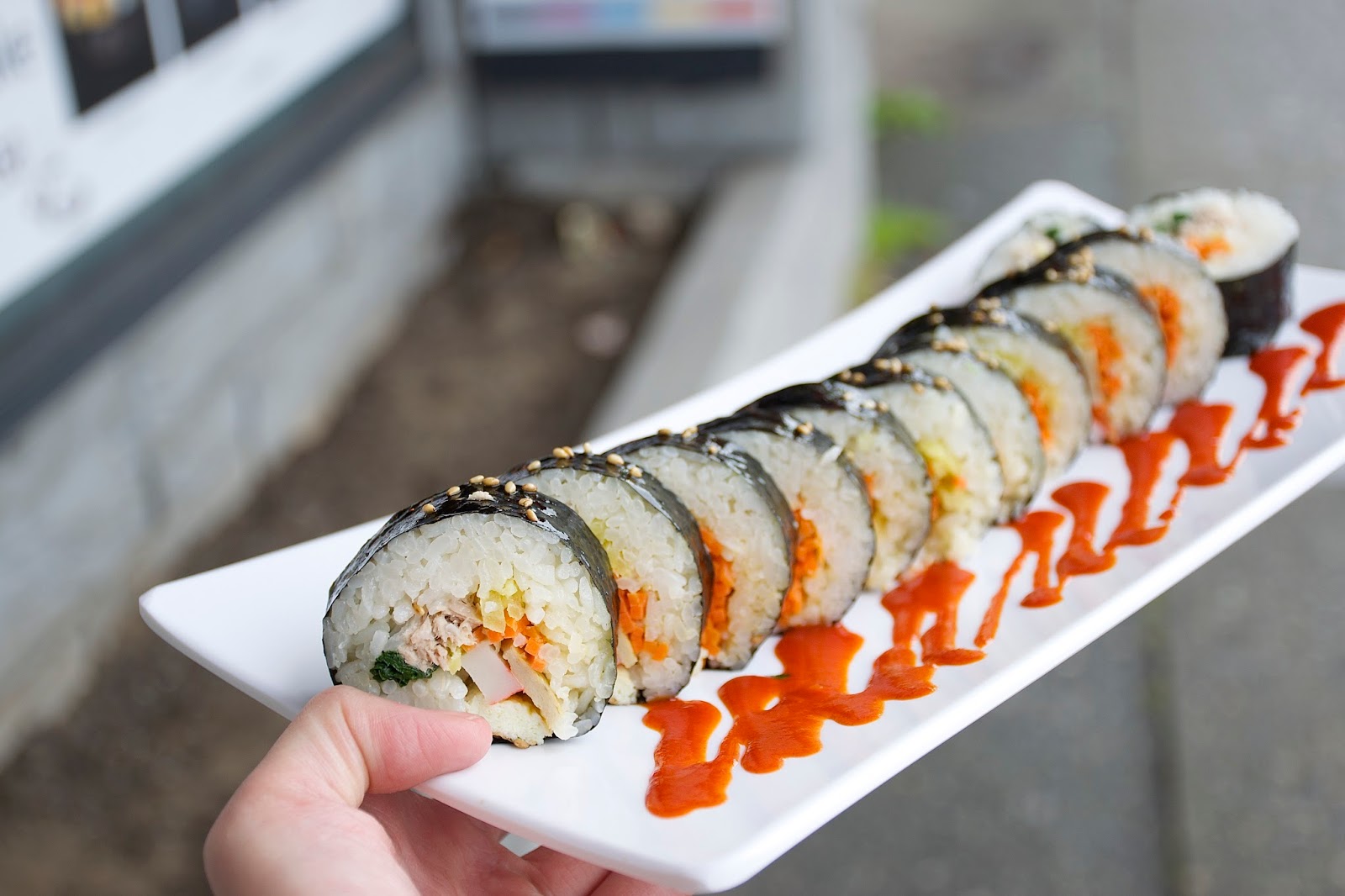 This was really yummy hehe! And wow, this thing was huge, alot bigger than we were expecting!! The roll had ebi, egg, tuna, spinach, and bits of a carrot in it! I really liked the rice, it was chewy and firm without being too mushy!! The roll was neatly assembled and the presentation was pretty nice!! The sauce on the side was actually shiracha!! 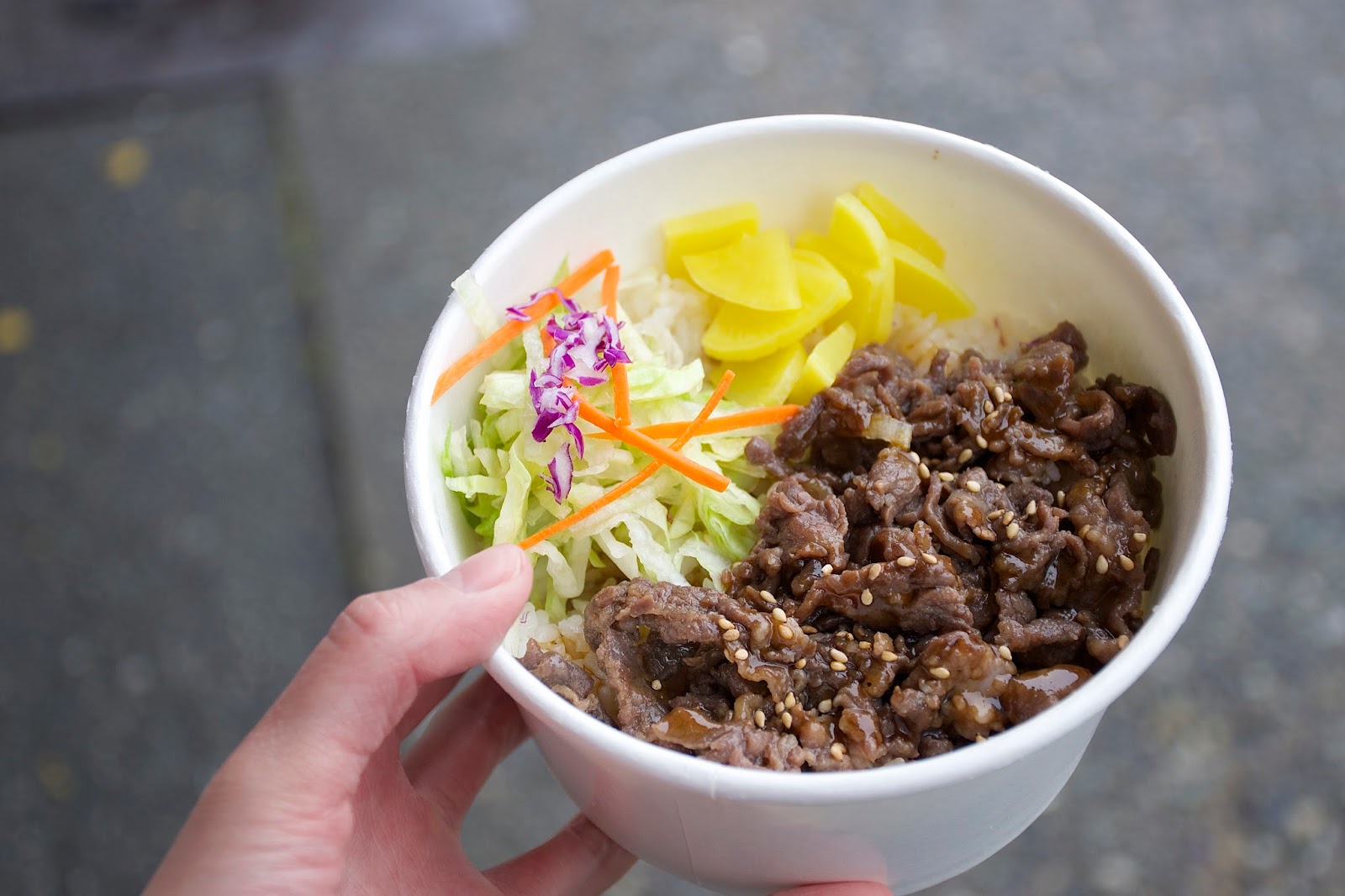 Bulgogi Depop
3.5/5 stars
This was such a cute little rice bowl!! The bulgogi didn't dissapoint, it was moist (although it could've been juicier) with a savoury-sweet glaze coating the meat! The rice to meat ratio was pretty good, there wasn't too much rice! The rice also held up the contents so it didn't get soggy from the meat on top!! They also have a tuna, chicken, and kimchi version (which I would totally come back for!!) 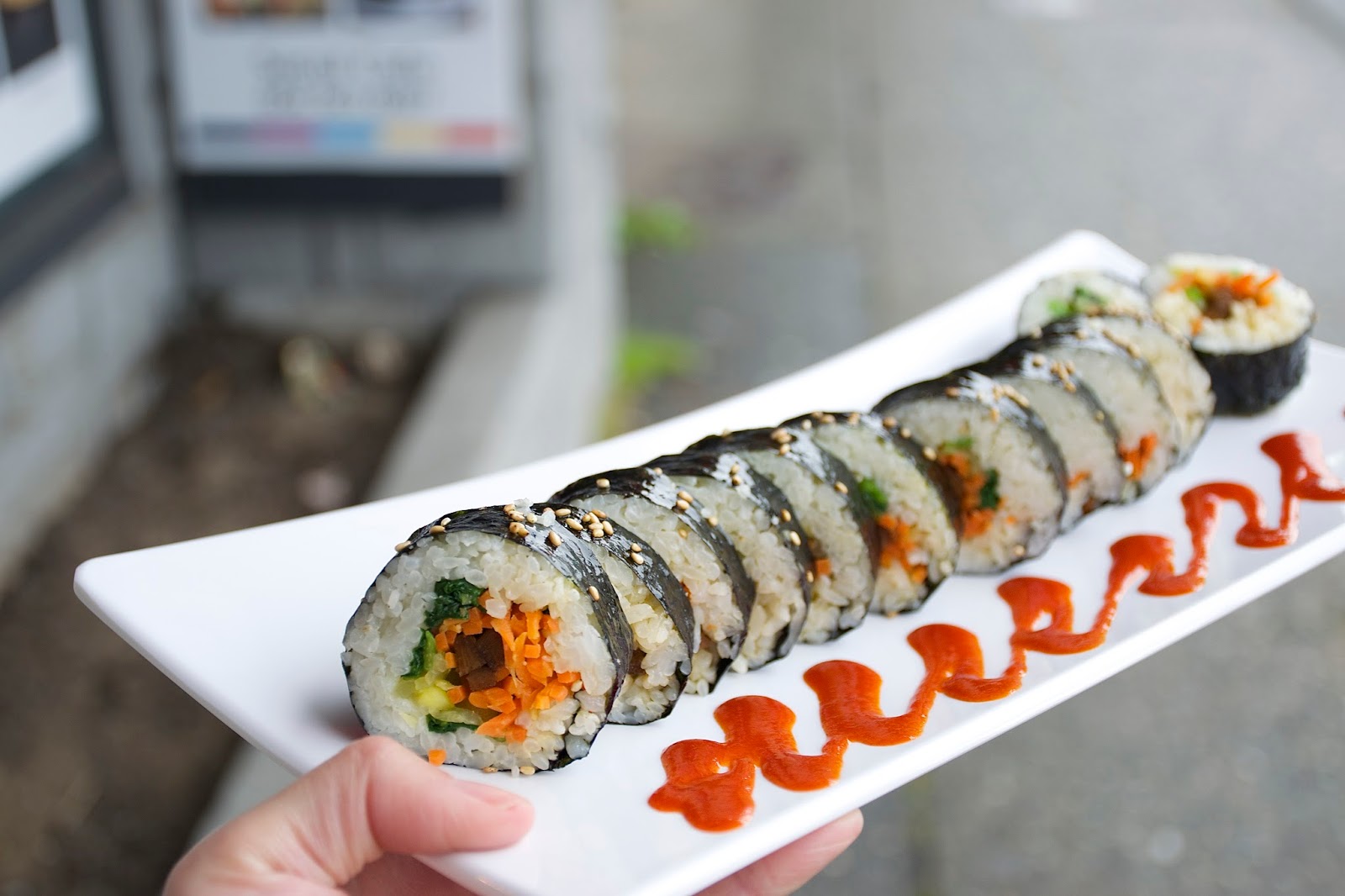 Veggie Kimbap $3.99
3/5 stars
We also ordered a veggie version of the kimbap!! This was really tasty, but I still prefer the tuna version haha!! This one had all the same ingredients except that it had pickled (radish?) in it which made the roll alot sweeter!! Since the ingredients are so light we gladly devoured the whole thing!! :D 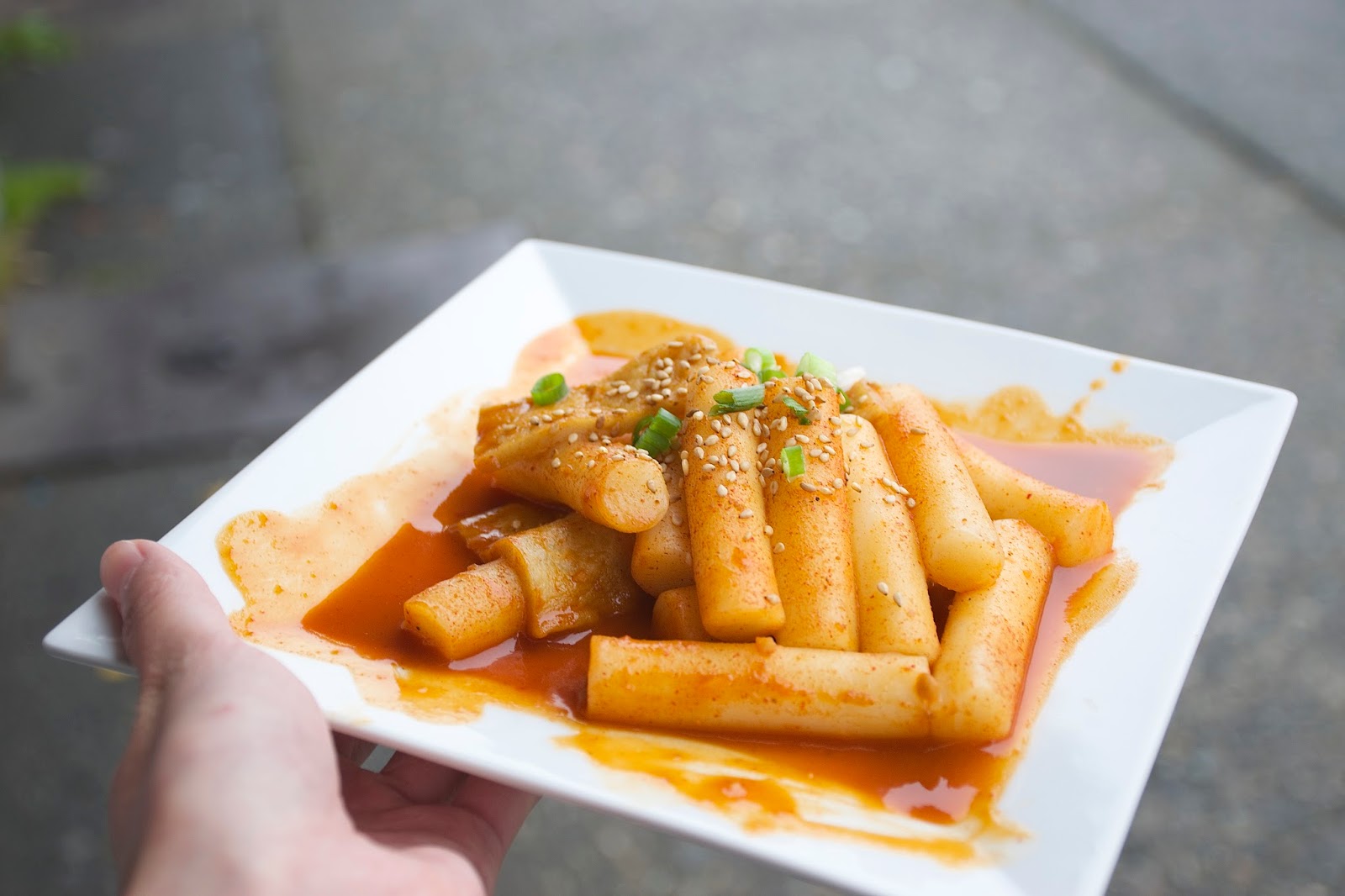 Dduke - Bokki (Spicy Rice Cake) $4.99
3/5 stars
The rice cakes were a decent size, and we had trouble finishing it, since it was so filling haha! The rice cakes themselves were "qq" chewy, and really fun to eat! The sauce basically tasted like a sweeter version of watered down shiracha, which pairede really went with the rice cake!! The sesame seeds were a nice touch! :D 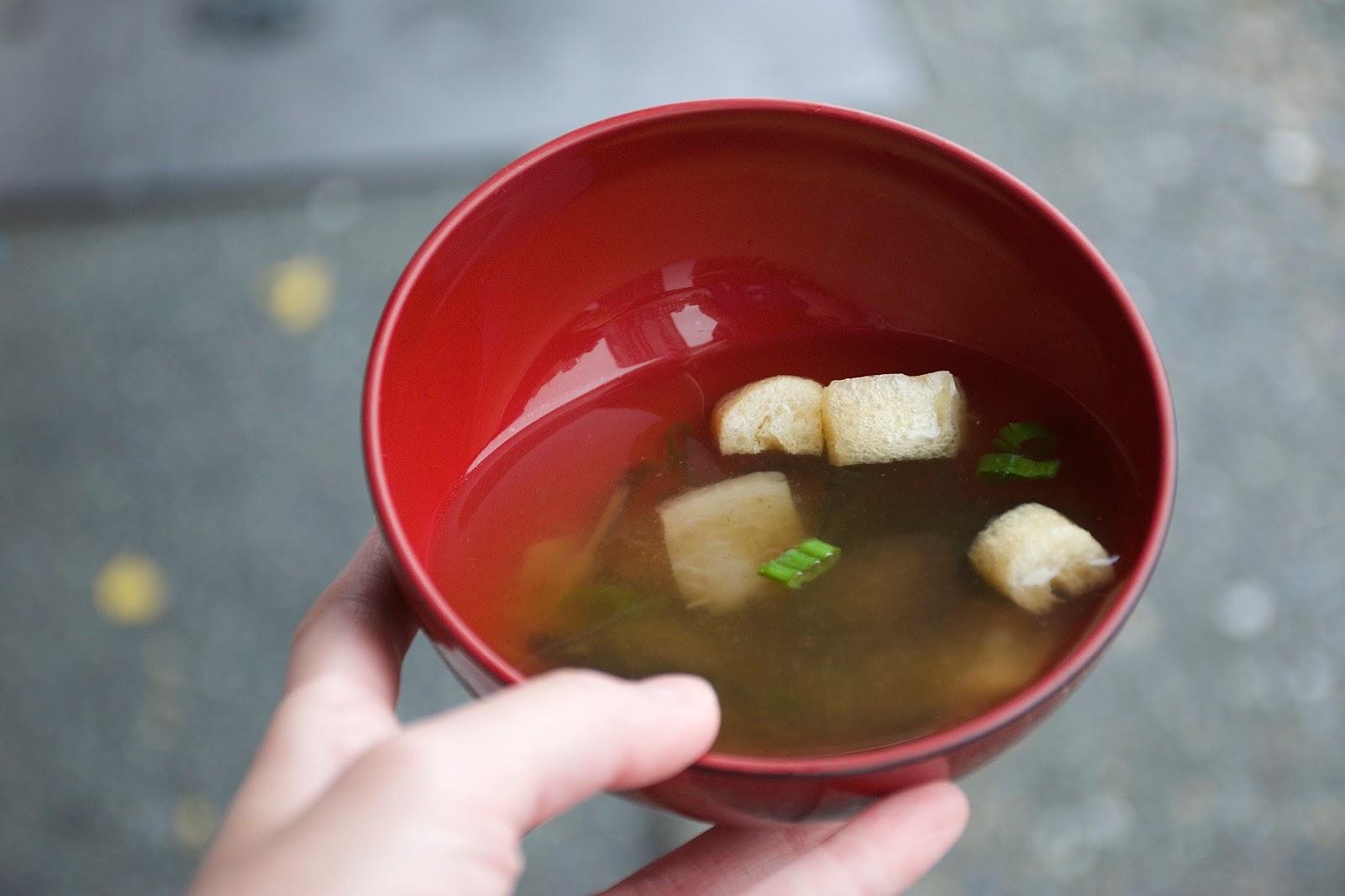 Complimentary Soup
3.5/5 stars
We also got some complimentary soup, and this was really good!! Definitely not your average, msged up soup!! There was a strong pepper flavour, accentuated with bits of seaweed and tofu pockets!! :D 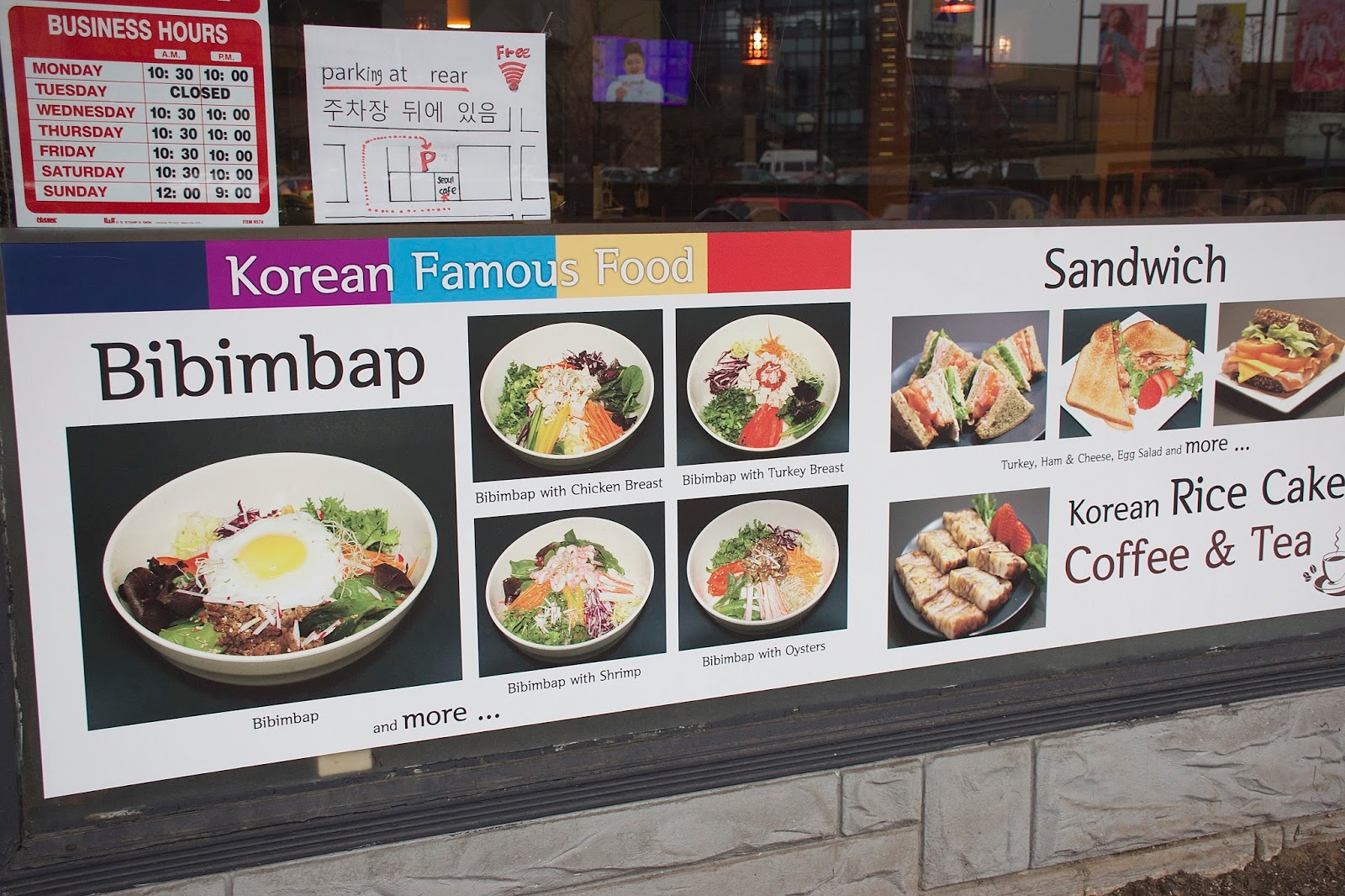 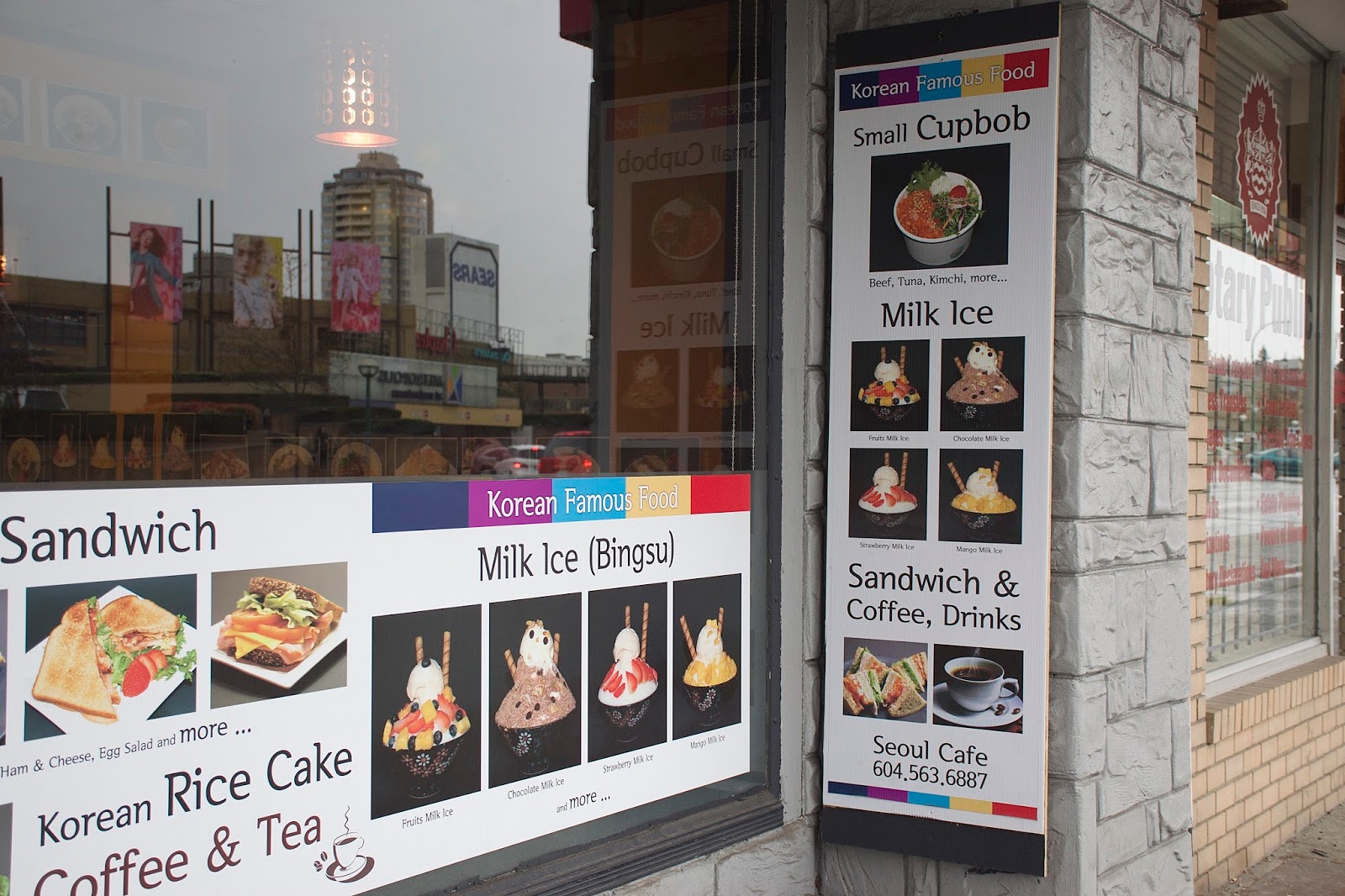 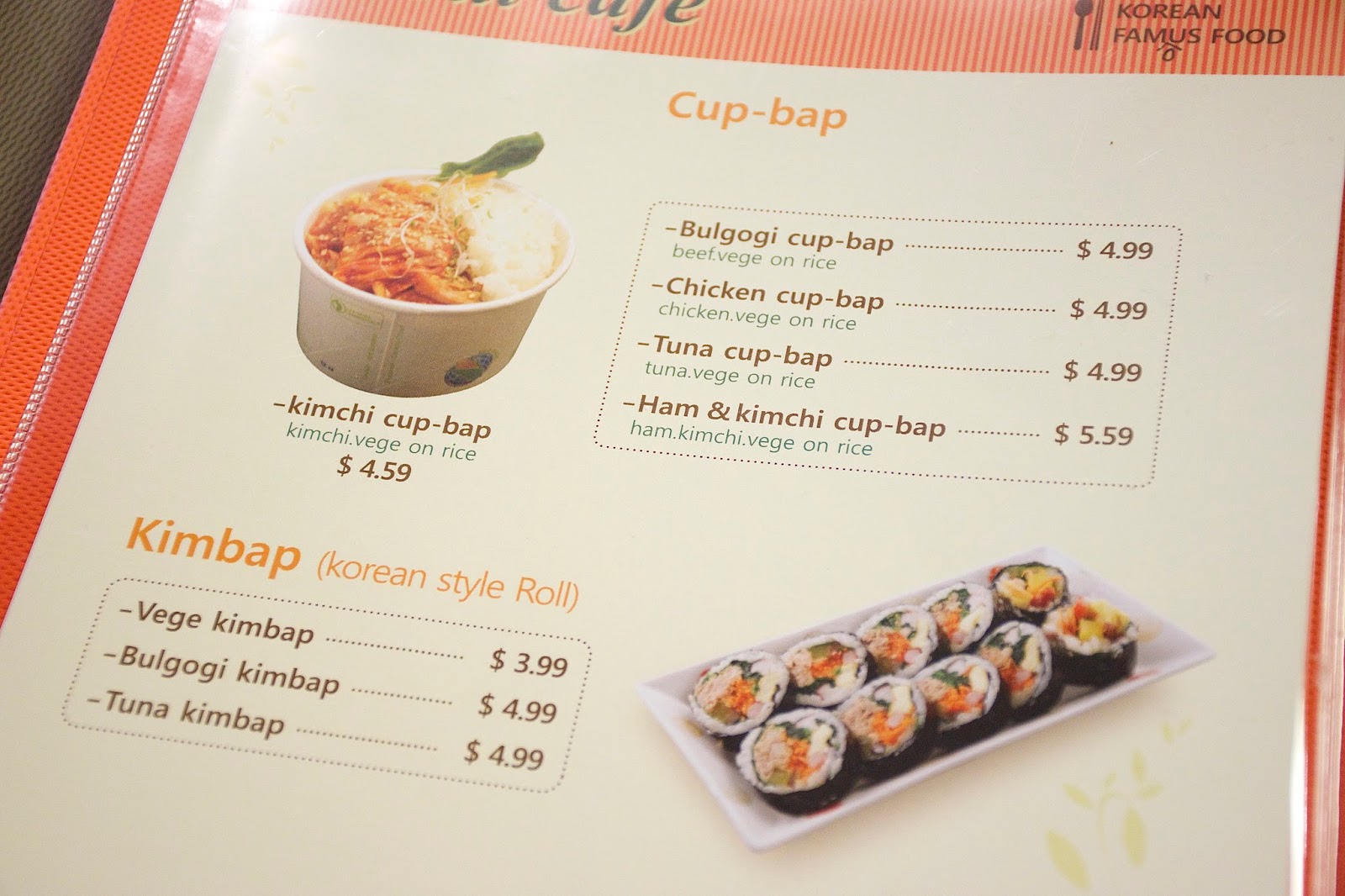 Everything on their menu is so reasonably priced!! :D 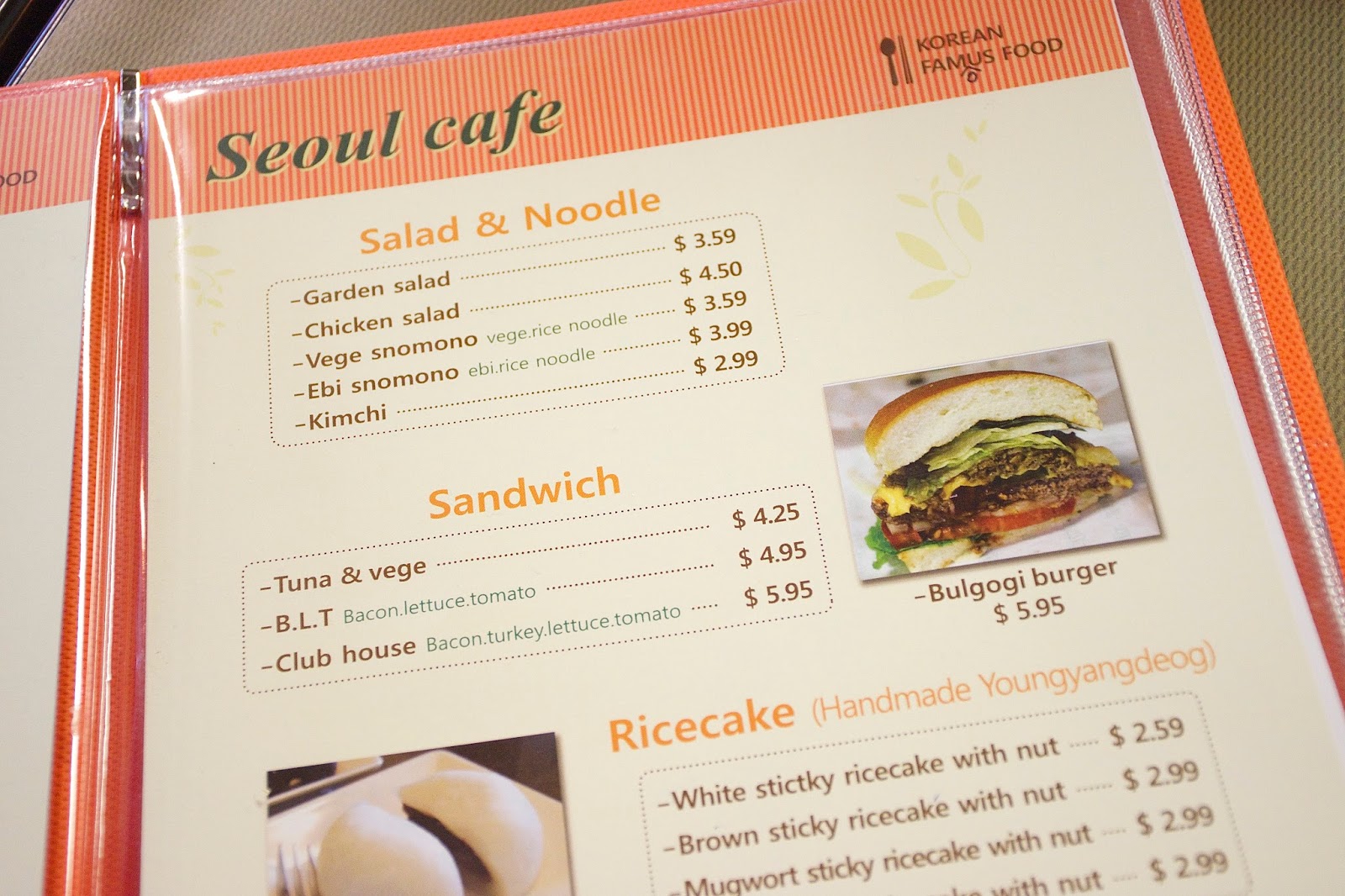 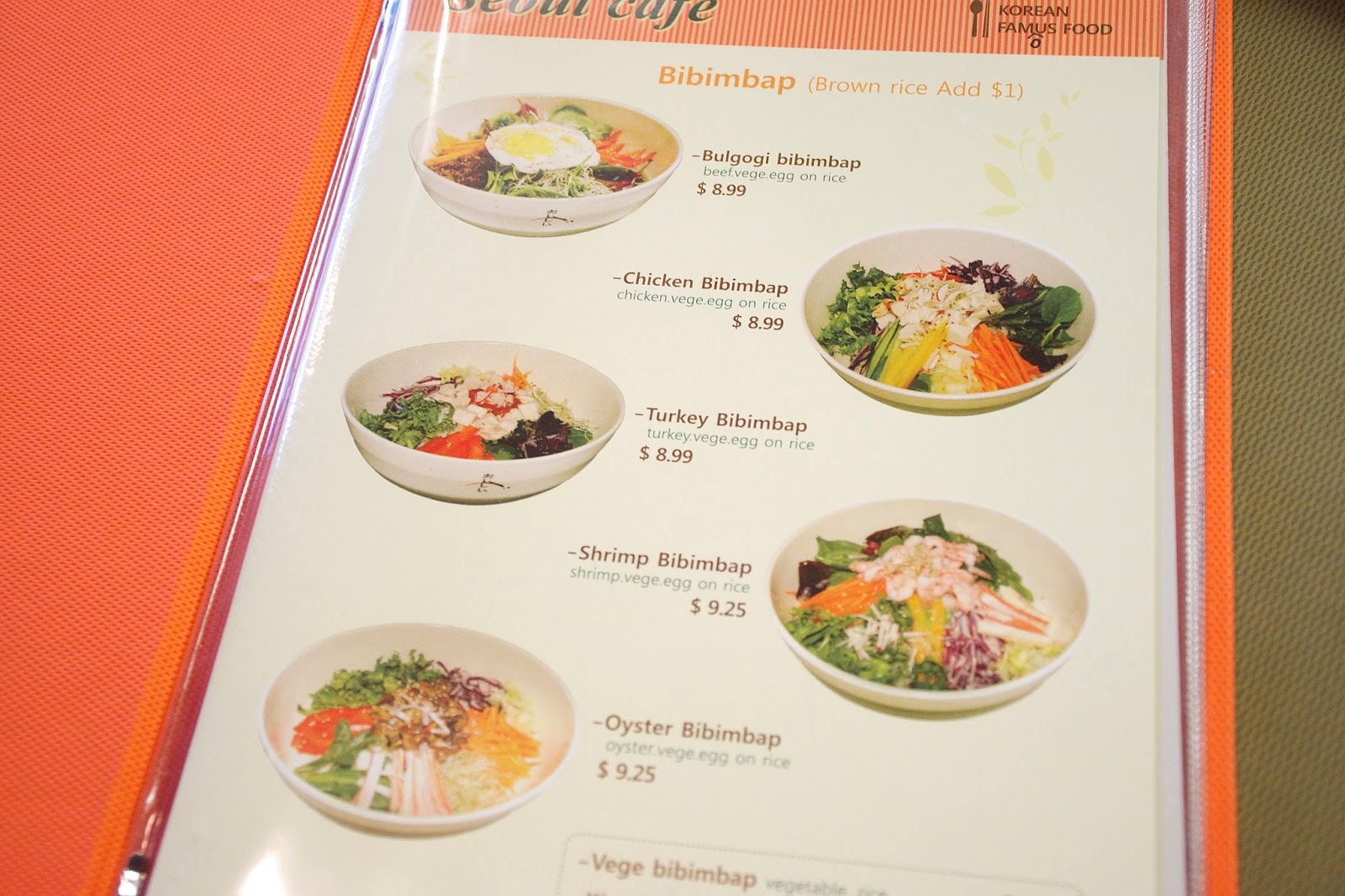 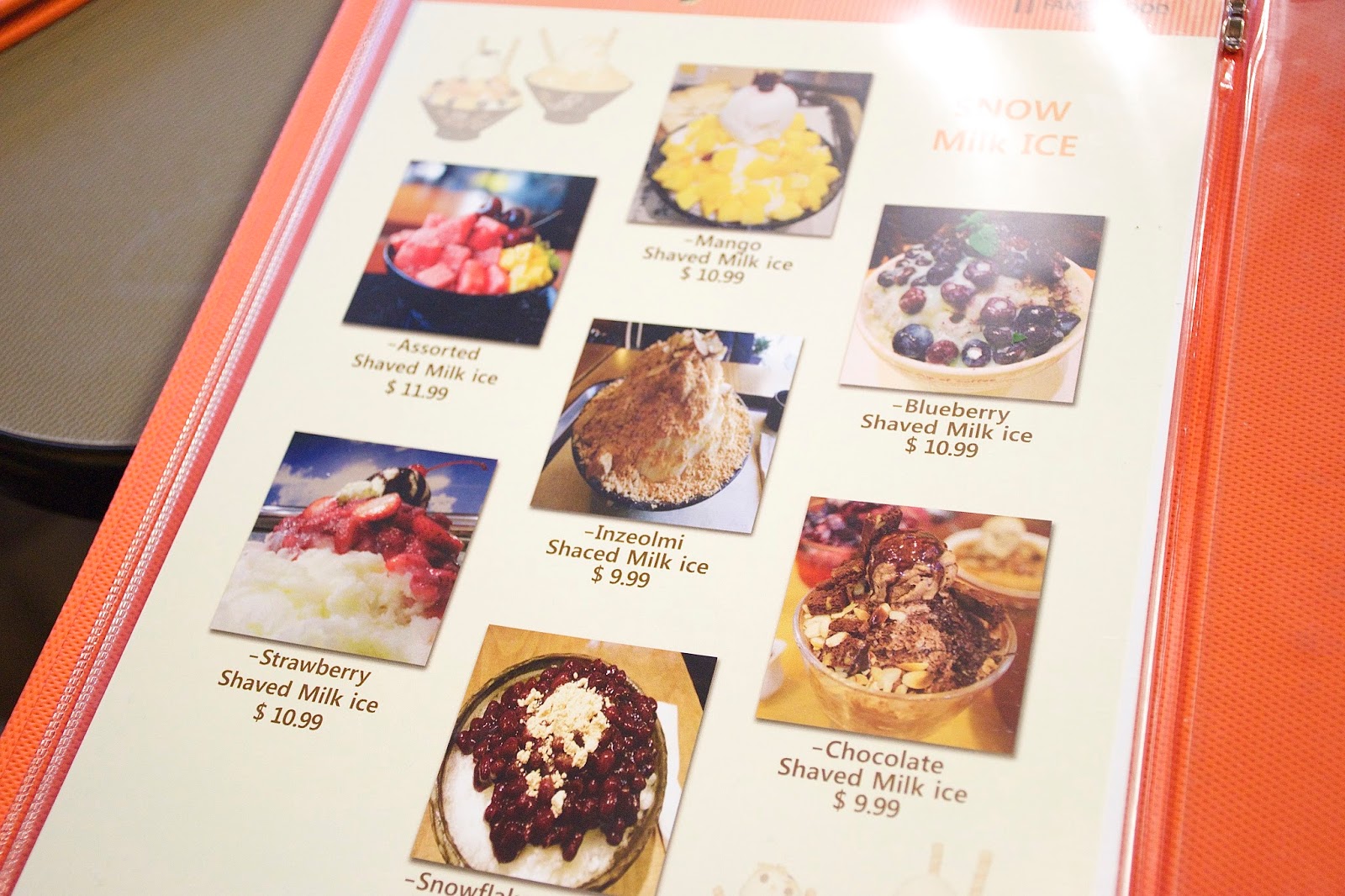 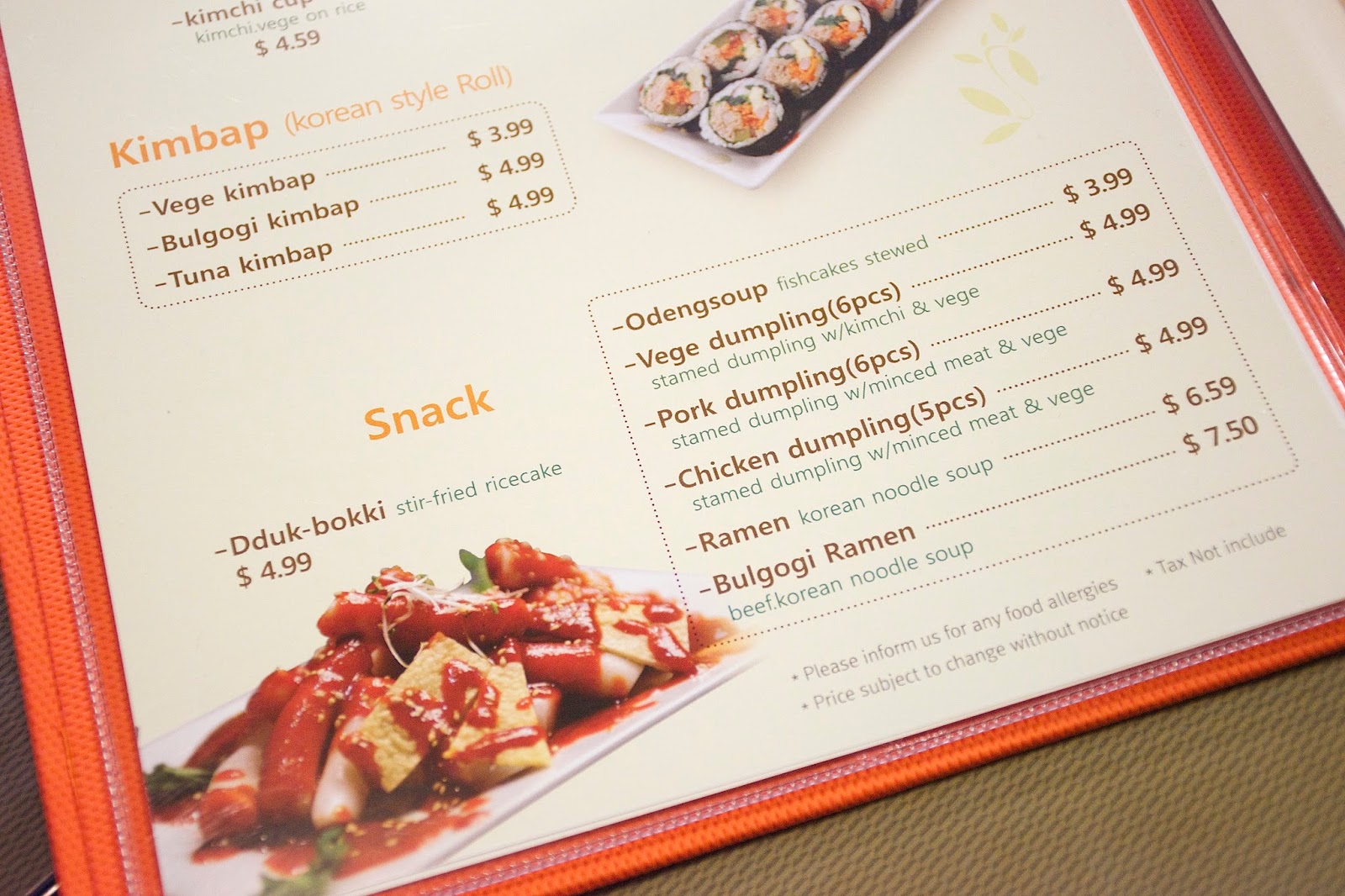 They even have korean ramen!! Or should I saw ramyeon ;) 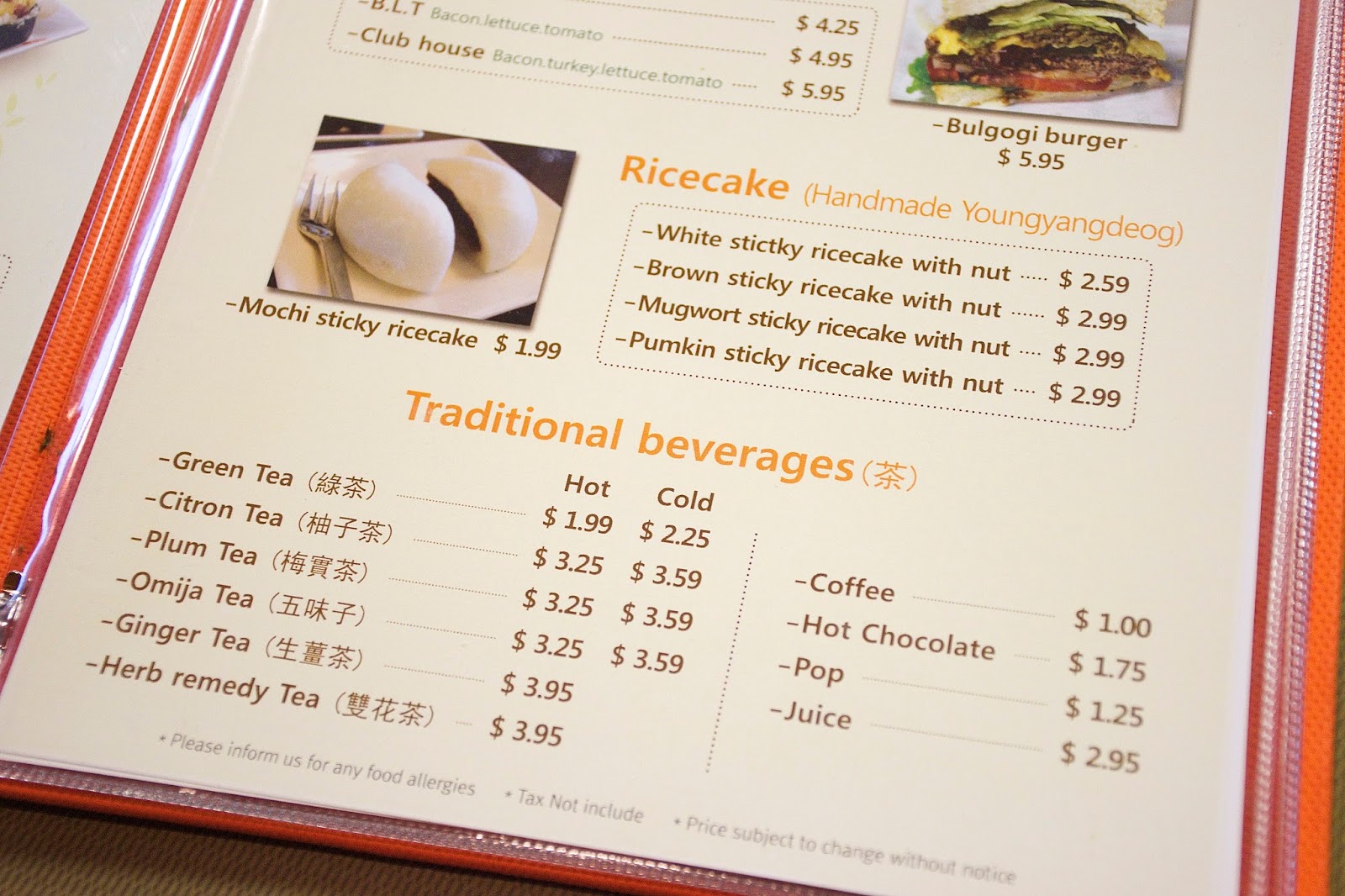 Citron tea is one of my favourite korean drinks!! I have a huge jar at home hehe!! :D 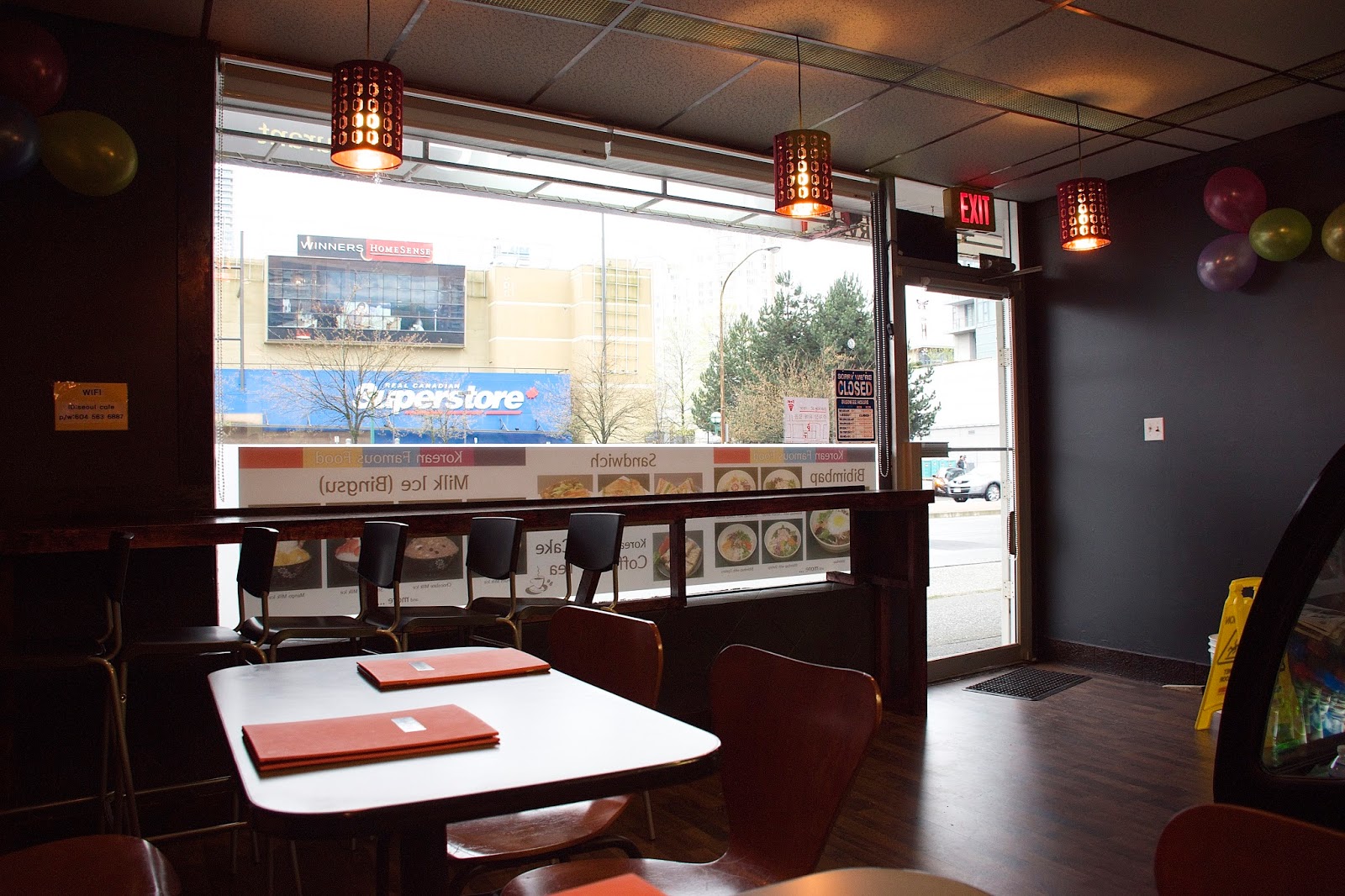