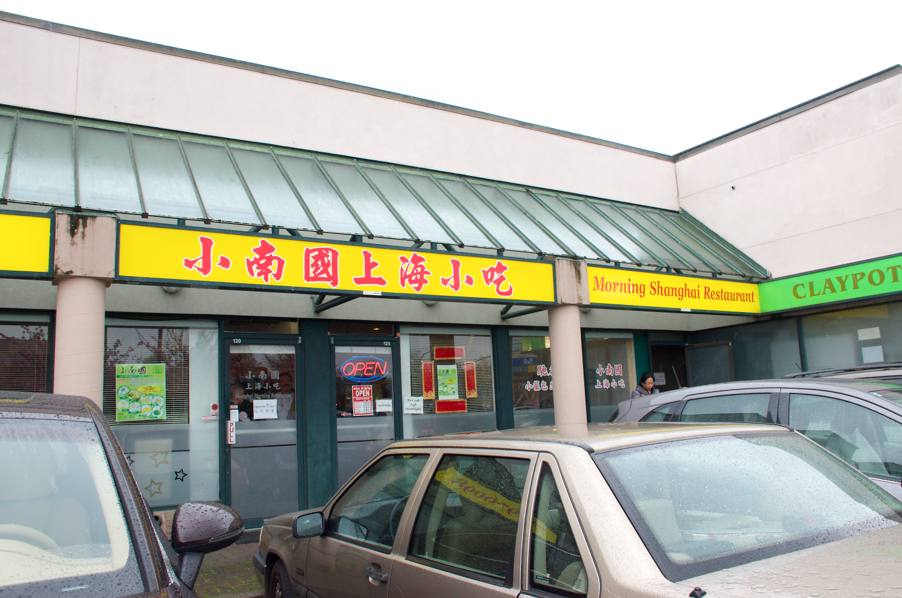 After a disappointing meal at Shanghai Gourmet a few days ago, I was in desperate need of some REAL Shanghainese food ASAP! Seriously, I'm still having nightmares about the XLB from Shanghai Gourmet LOL (jk). So my dad and I headed to Alexandra Road (aka Eat St) in Richmond, for some Shanghainese, done right!! :D

Shanghai Morning is one of the more well known Shanghainese restaurants in Richmond, they're always busy and there's usually a lineup outside!! Shanghai Morning is located in the same plaza as La Amigo HK Cafe (their african cajun chicken is AWESOME) and MaxNoodle (one of my favourite places for wonton noodle soup!!)

Oh guess what? I went to Shanghai Morning without looking at the reviews first and when I got home I found out I had unknowingly ordered all the most popular items on the menu!! I guess I'm finally getting good at this whole ordering thing ;)

Service was shockingly great!! Is above average service becoming a thing at chinese restuarants now? LOL! The waitresses were really friendly and they even smiled!! (Shocking I know)  ;)


They seemed genuinely concerned about my peanut allergy after I asked if the sauce they use is a mixture of peanut/sesame sauce (Turns out it was.) They were quick to fetch extra rice/napkins, and our tea was constantly refilled! Both my dad and I were pretty impressed haha!

My dad was just as impressed with the food (and he's really picky, especially when it comes to chinese food!) He even said he likes Shanghai Morning more than Dinesty haha! Most of the items were pretty solid, and for the price point, we really didn't have any complaints!! :D

Apparently they had a promotion going on if you order $20 worth of food you get a free serving of xiaolongbao, but we didn't get any :( I totally forgot to ask because I was too distracted by all the food on the table ;) 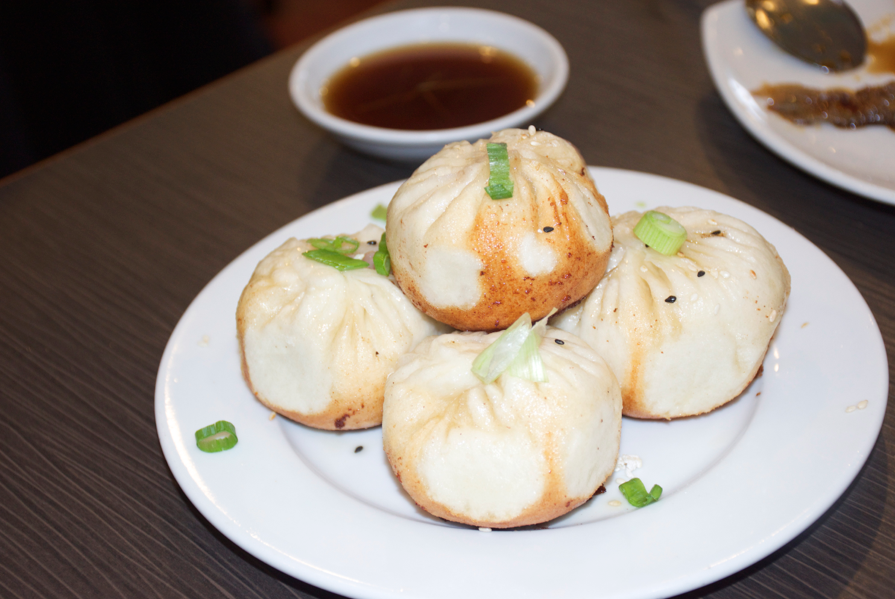 Pan Fried Buns $5.50
3.5/5 stars
Pan fried buns is their signature dish!! This was a very good version, the bottom was crispy and evenly pan fried!! The bun itself was soft, not too doughy, and the juice squirts out when you bite into it!! My dad learned the hard way when he took a bite and juice squirted across the table LOL. The filling is moist with a clean tasting broth and a light porkyness! It also comes with some vinegar/ginger dipping sauce on the side, the same sauce that they serve with the XLBs! 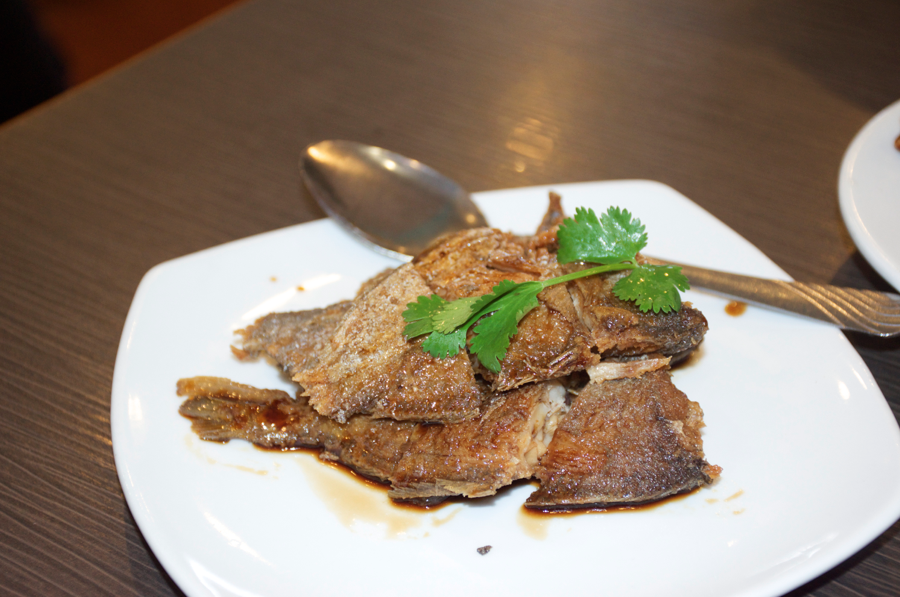 Spiced Smoked Fish in JiangSu Style
4/5 stars
Another winner!! This was served lukewarm as an appy, but it was so tasty!! The blend of spices they use in this is what really makes the dish!! It's incredibly fragrant, and the fish soaks up all the flavours of the sauce! Eat it quick though because the fish gets kind of soggy from soaking in the sauce haha, but other than that, it was great! 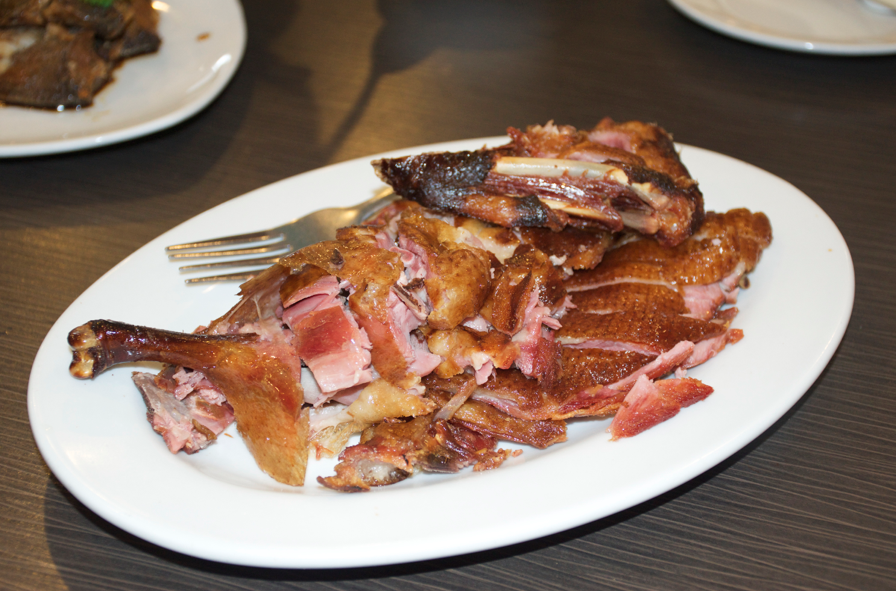 Smoked Tea Leaves Duck: Half $14.50
4/5 stars
This was awesome!! The addition of tea leaves imparts a fragrant, florally woodiness to the duck, and the added smokiness takes the dish to another level!! For half, this was a really large portion!! I pretty much ate 3/4 of the dish by myself when my dad was busy working on his wontons hehe. Hey, you snooze, you lose!! ;) 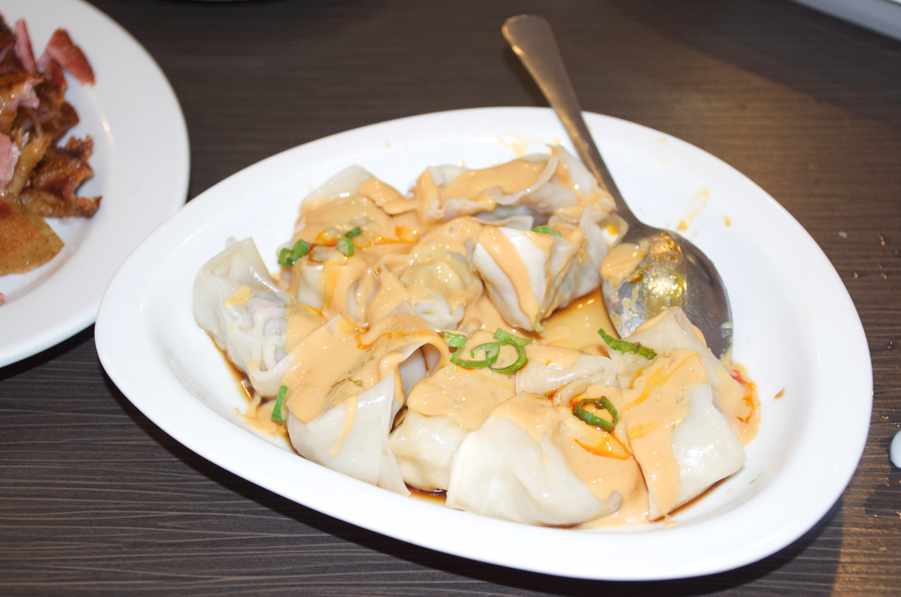 Cold Wontons (Chao Sau) in Peanut/Sesame Sauce
3/5 stars
On the menu they had this listed as "Cold Wontons" so we thought the sauce was going to be a cold sesame vinegerette of some sort but turns out they use peanut sauce...so I couldn't eat it!! Since we had already ordered it it was too late so my dad ate the entire plate by himself!

The wontons were huge and a lot larger than I was expecting!! The dough was thin and the inside was moist with a little bit of soup. The sauce was a little bit spicy and the peanut sauce added a pleasant nuttiness that worked well with the other flavours. 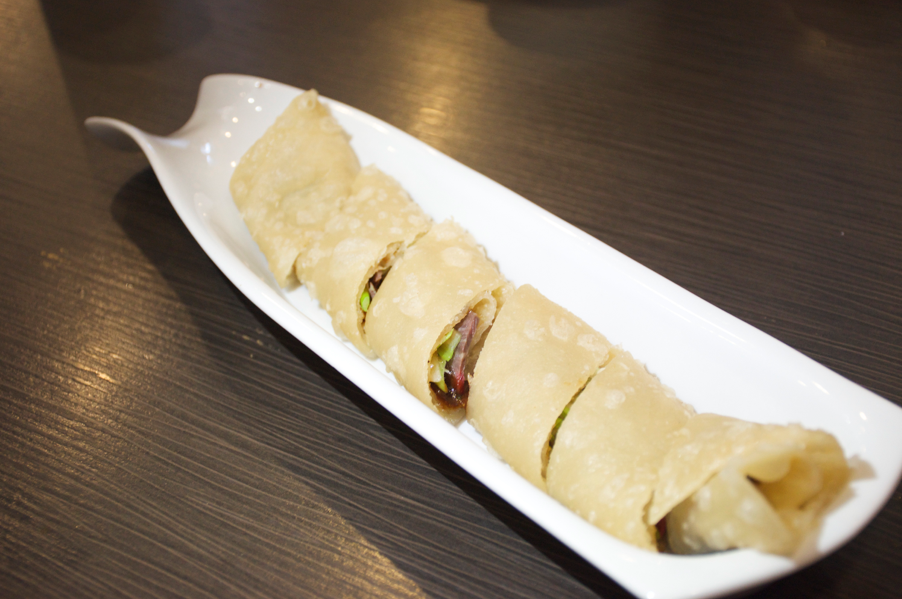 Beef Roll
2.5/5 stars
This was okay. I still think Dinesty and Shanghai Elan does a better version! The pancake was thin and not too doughy, but I wish it was crispier!! The beef filling was sparse and a little too tough for my liking. The flavours were predictable with some sweet-saltiness from the hoisin, and freshness from the green onions. 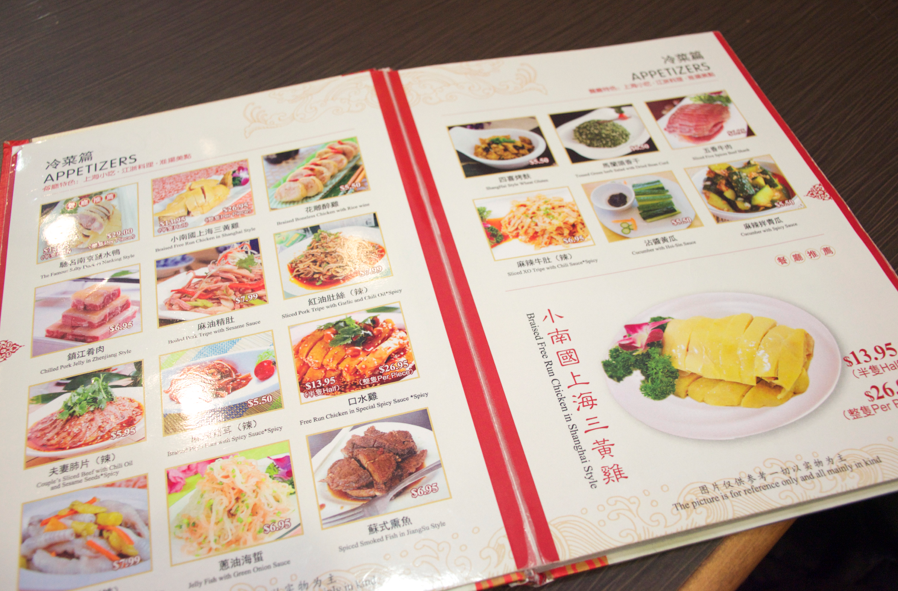 They have a huge selection of dishes to choose from! 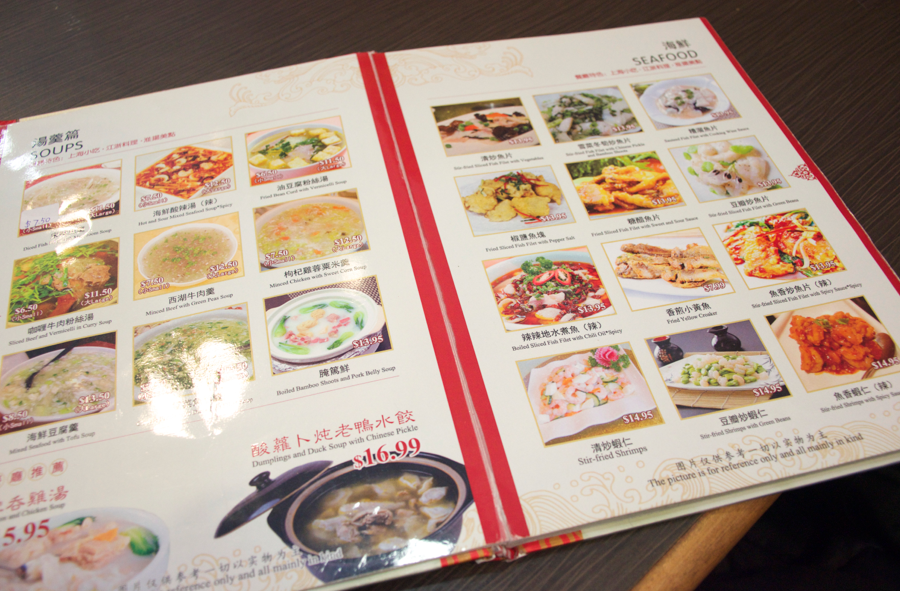 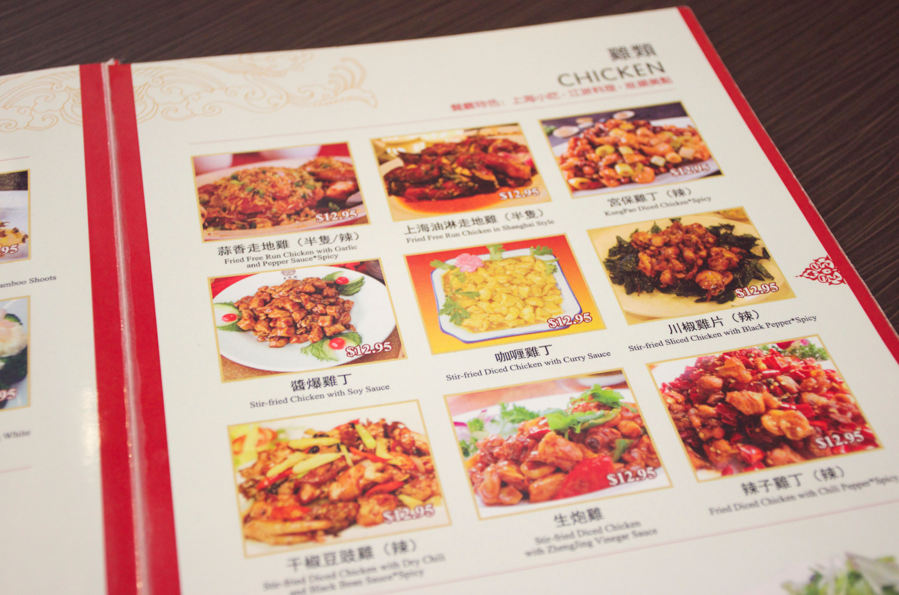 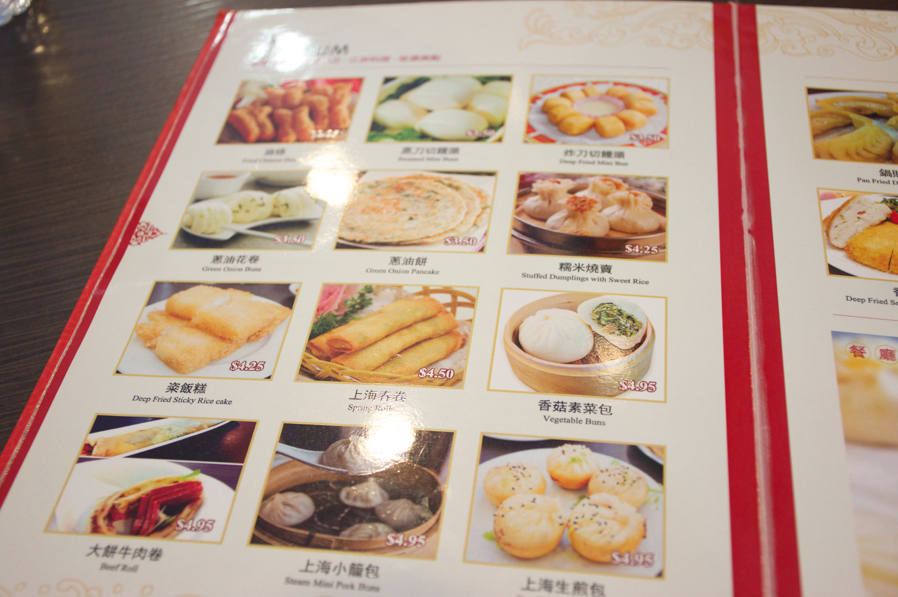