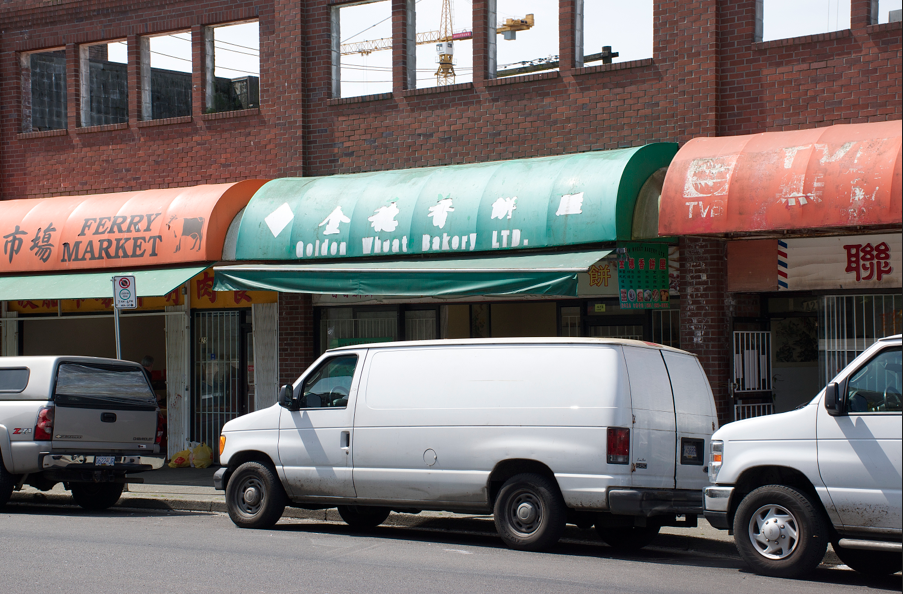 Last week a few of you guys recommended that I try out Golden Wheat Bakery's famous rice rolls! So after my (not so filling) lunch at Finch's yesterday, and dessert at the Pie Shoppe, my mom and I walked a few blocks over to Golden Wheat in Chinatown!!

The first thing I saw was their huge, and I mean HUGE Jin Dui (sesame balls) and ham sui gok (fried dumplings!!) So of course I couldn't resist and got myself some hehe!! If the size alone wasn't impressive enough - the ham sui gok was delicious!! Chewy, fragrant, and full of flavour!!

We also spotted some radish/taro cakes they had dislayed at the front, and we managed to grab the last one!! The lady at the counter said that their radish cakes were really popular and they sell out really fast!!

Of course we couldn't leave without grabbing a box of their famous cheong fun (rice rolls!!) You guys were SO right!! :D  The rice rolls were amazing!!

We managed to walk out of there with enough food to feed 4 + people and we only spent $10.50!! The only downside was that there's no seating, so we were planning on taking our food to Chinatown Plaza because they have a food court - but once we got there there was some kind of event going on and it was just way too loud...so we ended up going to the Starbucks across the street to eat!! ;)

On our way to Golden Wheat we passed by Kent's Kitchen and my mom got all nostalgic LOL (she use to come here a lot with my dad) and she was like "Wow, Kent's looks exactly the same!! It hasn't changed in 20 years!!" 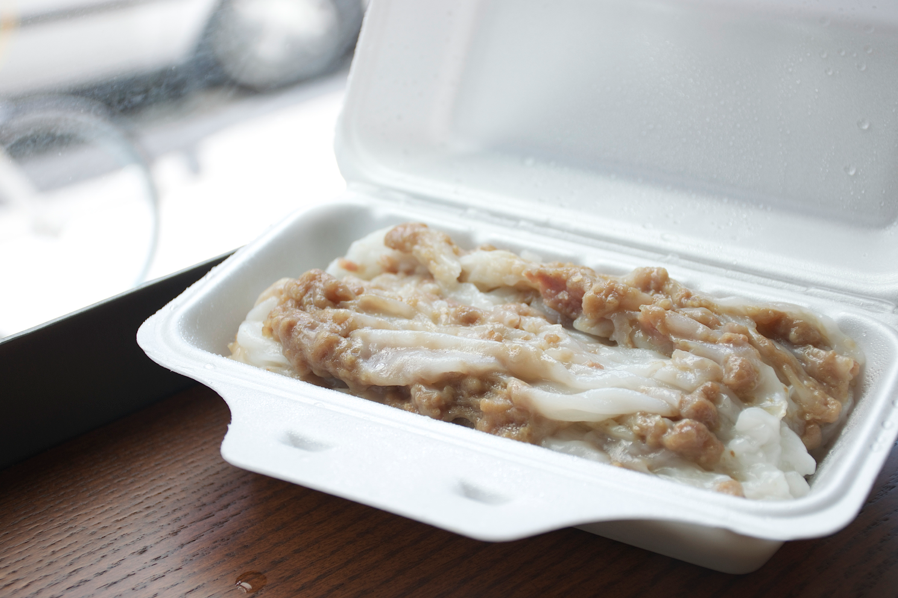 Cheong Fun - Beef Rice Rolls $2.50
4/5 stars
They're not the same as the ones you find at dim sum with the beef filling wrapped inside the roll, rather, they beef is interwoven into each layer - so you get a ton of meat in each bite - how they're traditionally made in Guangzhou!! The rice rolls were super tender - and the portion size was so large that we couldn't finish it!! For $2.50 - it was a complete steal!! 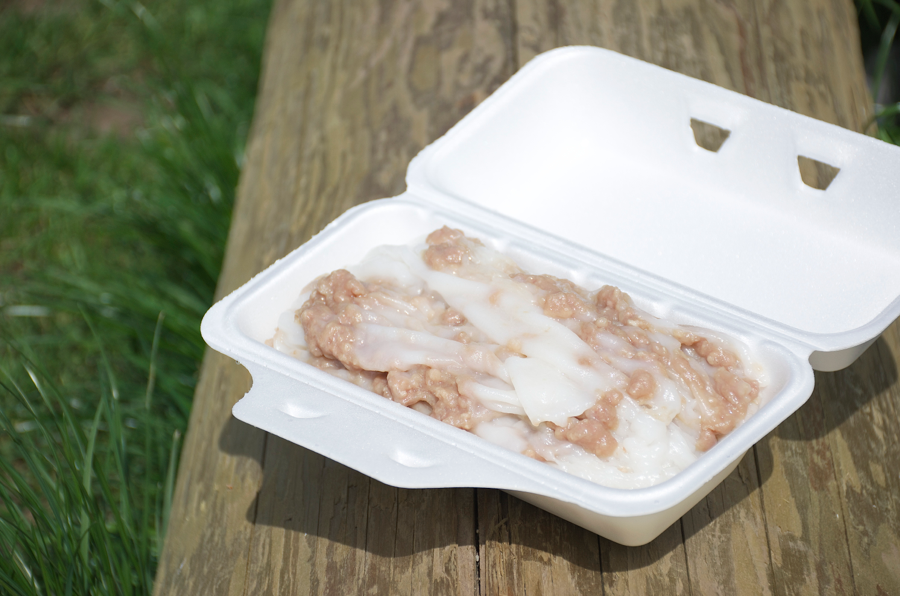 These photos were taken outside across the street from Golden Wheat, the previous photo was taken inside Starbucks...on a log LOL!! Do you like the background? ;) 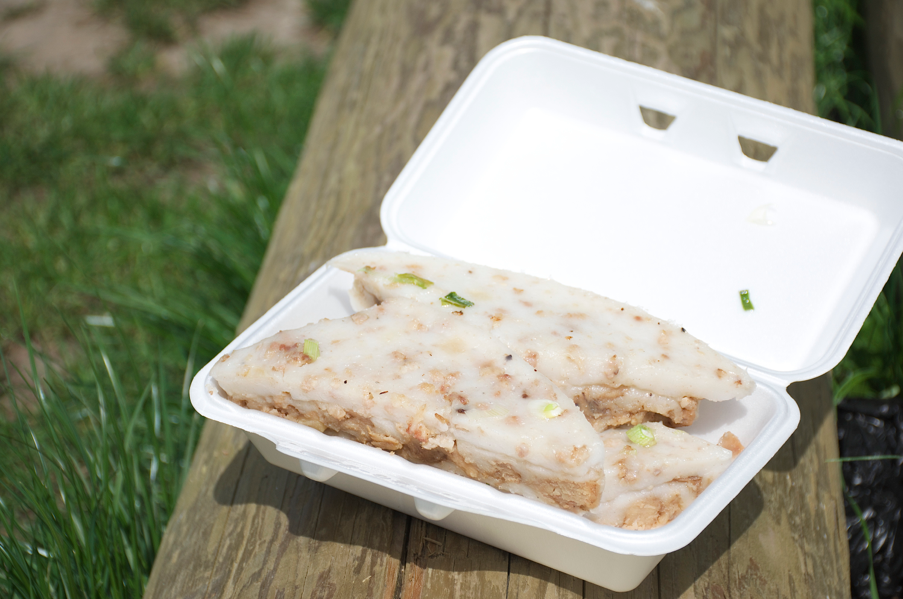 Lo Bak Gao (Turnip Cake w/ Taro) $4.50
3/5 stars
This was huge!! This came with 4 pieces - and by the second piece, we were already completely stuffed lol!! The turnip cake itself was super thick - twice the thickness of the ones at dim sum! These ones were also "wetter" in texture, and not as dry, but it was loaded with a ton of turnip and taro pieces!! Pan frying them would have made them even better!! 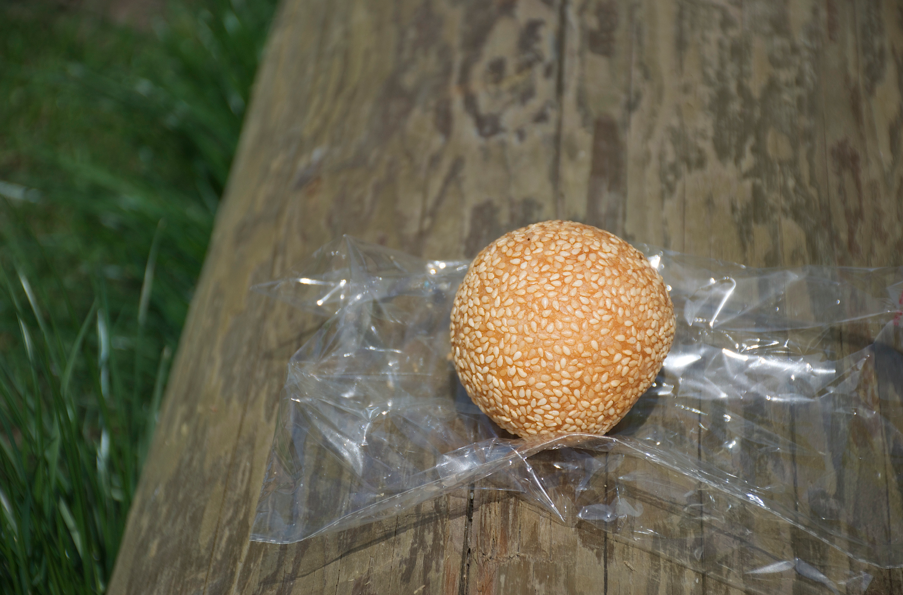 Jin Dui (Sesame Ball w/ Red Bean filling)
It looks so tiny in the picture, but its huge in person haha!!

2.5/5 stars
This was pretty decent as well!! Although these can never replace the freshly baked ones at dim sum (nothing better than a warm jin dui!!) this was still pretty tasty!! There was ample sesame on the ball, and the ball itself was fairly uniform in shape!! There was a lot of mushy red bean paste inside, which wasn't too sweet! 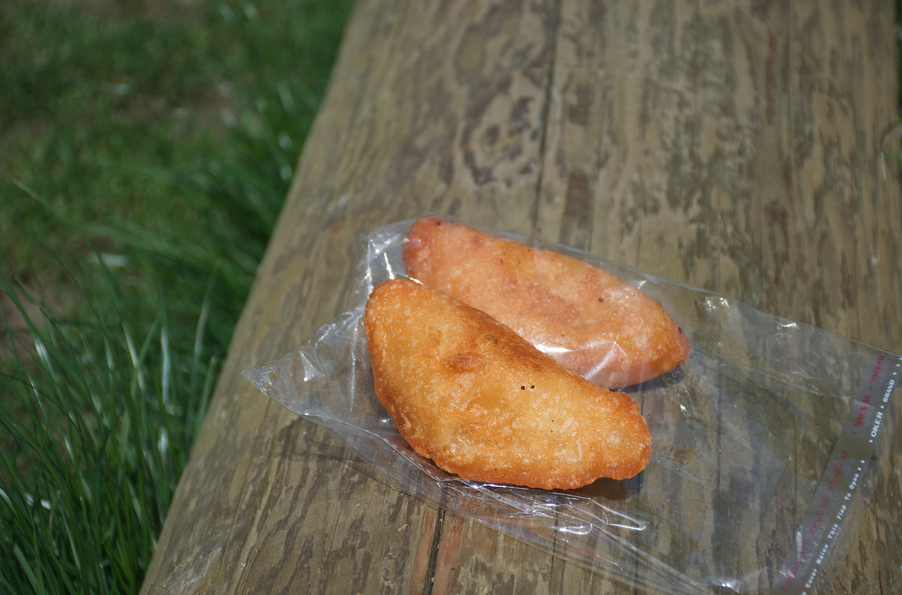 Ham Sui Gok 2 for $1.50
3/5 stars
This was really yummy!! I'm such a sucker for chewy things hehe. The dough wasn't thick, but not hard, and really easy to chew!! The filling was moist and flavourful with a strong mushroom essence!! The exterior was really crunchy and a great contrast to the soft interior! Great as a snack hehe - but really filling! 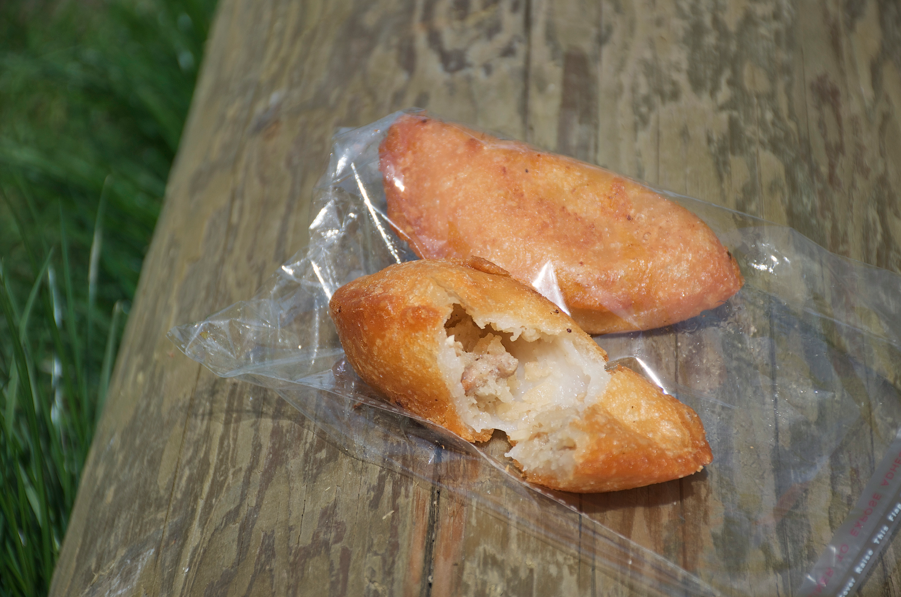 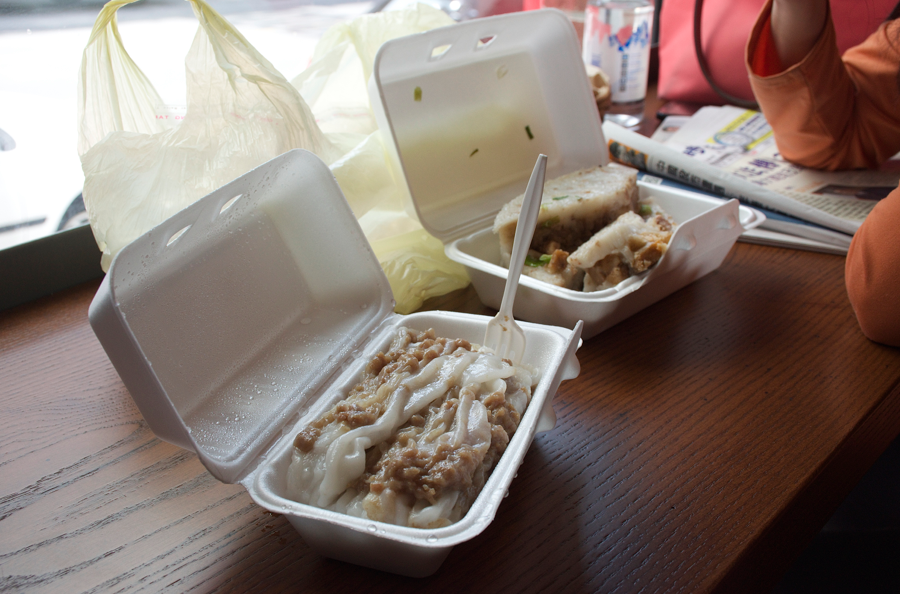 Our fancy setup at starbucks!! ;) 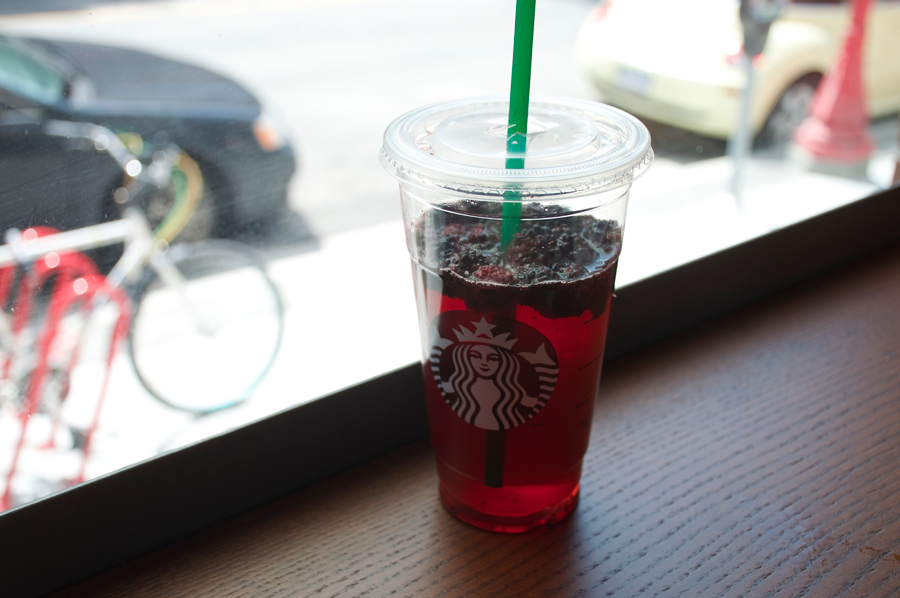 We also got a venti Very Berry Hibiscus to wash it all down!! I was surprised they put real blackberries in this lol!! Not bad Starbucks, not bad!! ;) 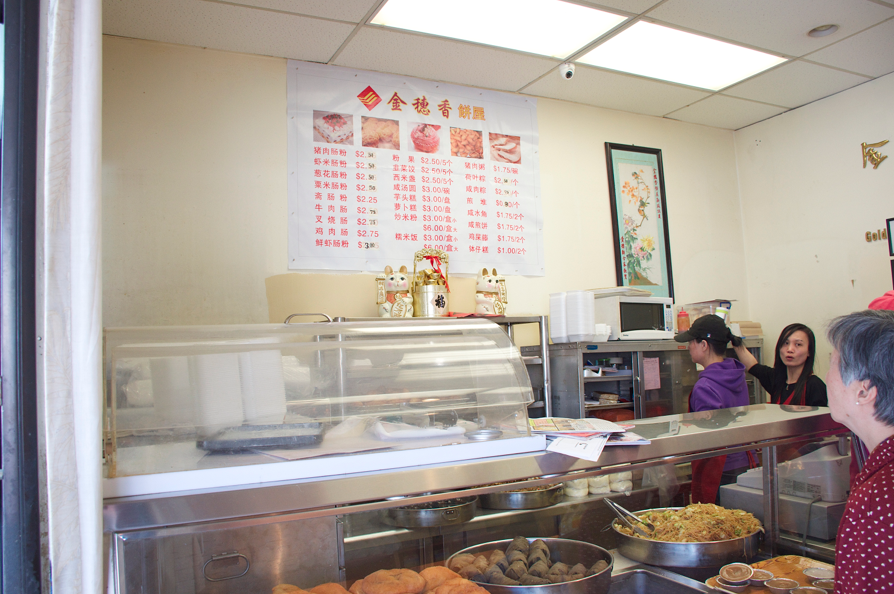 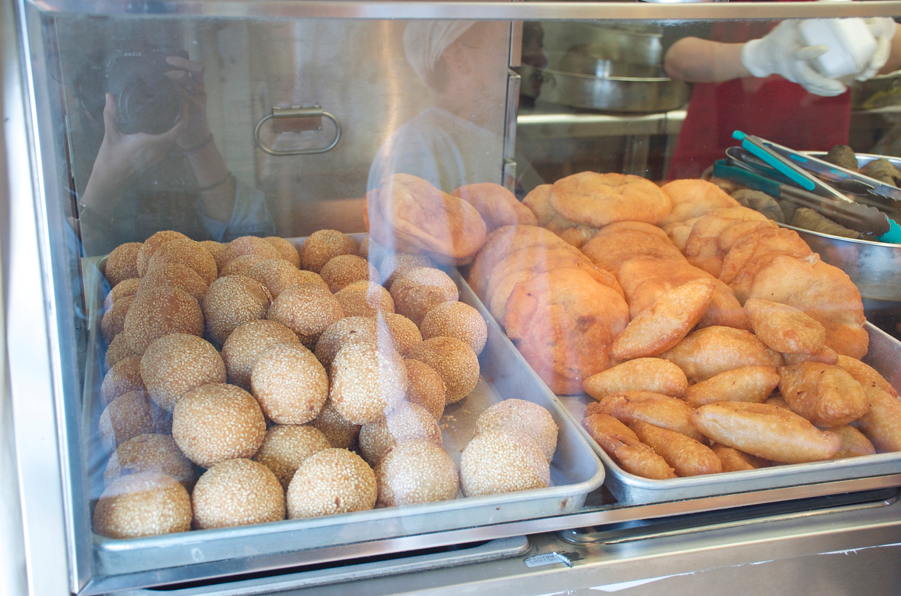