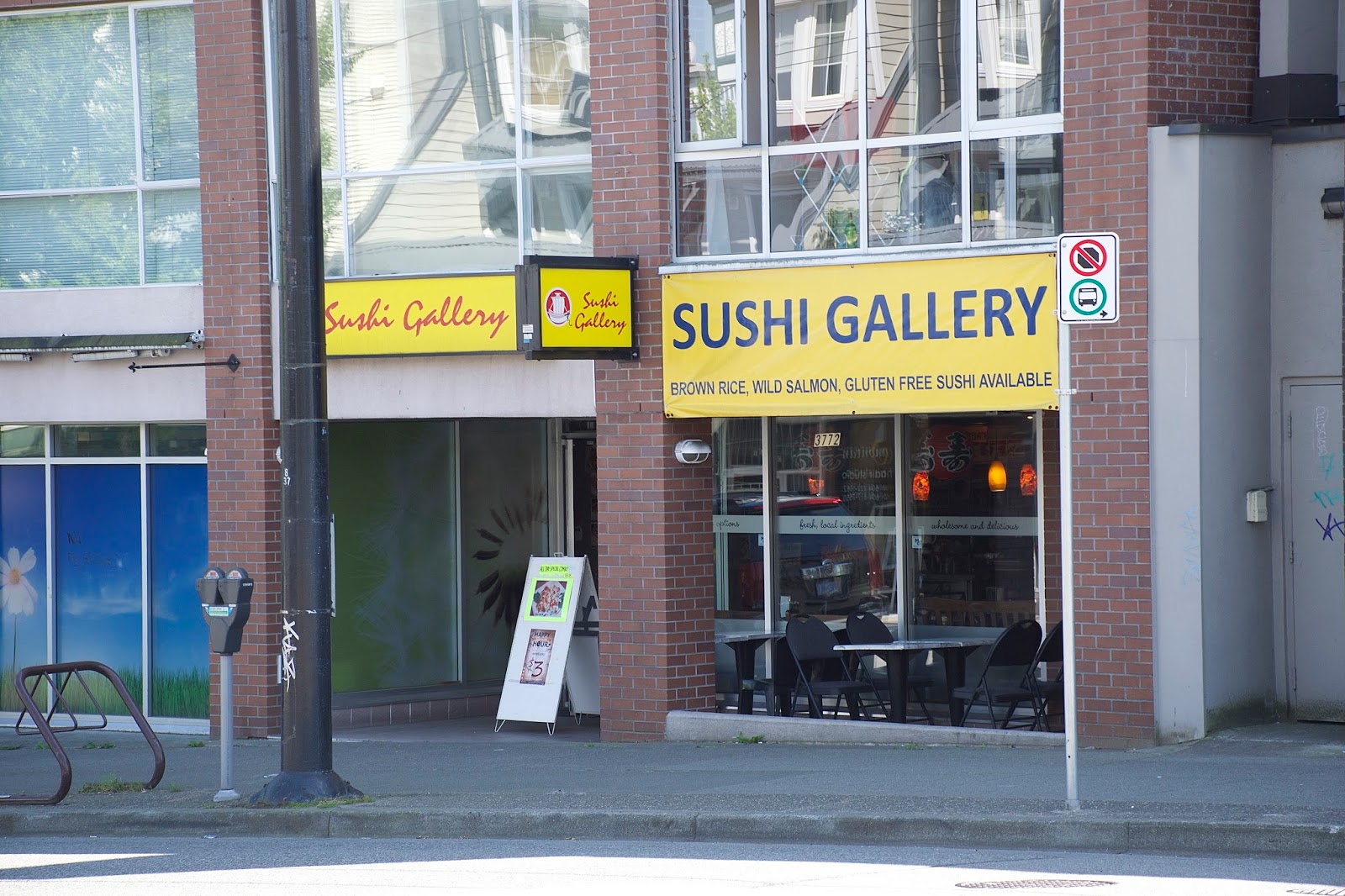 I have a 5 hour gap between my first and second class on Tues & Thurs so after my sociology class today (which ended at 1) I rode the 99 bus to Point Grey in search of food LOL (what else?!) I actually like having a long gap between my class because I have time to eat off campus, instead of having to resort to eating mediocre, overpriced campus food...I'm not paying $8 for hard pieces of fridge burnt nigiri!! ;)


I've been really into chirashi dons lately - I actually had one yesterday at Tengoku Sushi, and I ate another one today at Sushi Gallery haha!! I always order chirashi dons now because it's more filling and cheaper than ordering nigiri! The deluxe chirashi at sushi gallery is only $13.50, and get this: it includes uni and unagi!! Deluxe chirashis are usually around $15-$18 at most places - so $13.50 is completely unheard of!!


Sushi Gallery is just 5 mins away from ubc, super convenient!! Sushi Gallery is run by Koreans - the prices are really affordable (for the area) and the portion sizes are huge!! Seriously, if I knew the portion sizes were so large I definitely wouldn't have ordered an extra roll haha (I totally underestimated the portion sizes!) Nigiri starts at 75 cents, and you can get Sockeye salmon for an additional $1 in any of their combos!! They also have a ton of special rolls that start at $4.50!! You're allowed unlimited refills of miso soup (YAY!!) - they even have a gluten free version!! (This is actually the first time I've heard of gluten free miso lol!!) 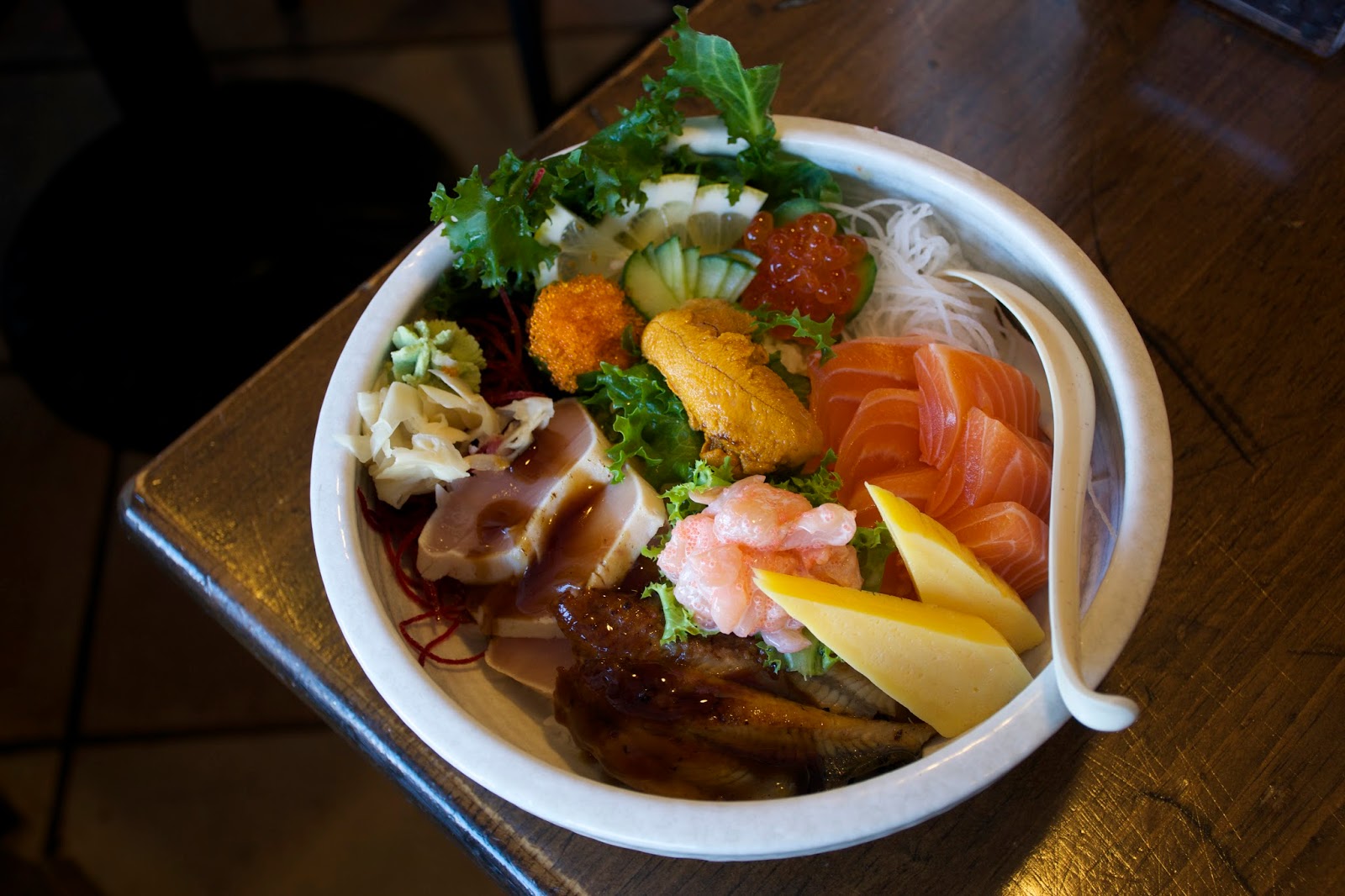 Sorry for the weird lighting haha, it was a mixture of mid afternoon sun and fluorescent lighting! :)

Wow...this was value for the money!! Seriously - for a mere $13, I wasn't expecting so much!! And the fact that this included uni and unagi totally sealed the deal!! Everything tasted reasonably fresh (by flash frozen standards!) and I love how they included 2 large pieces of seared tuna!! There was also ikura, 4 pieces of tamago, masago, salmon, chopped scallop,two large pieces of unagi, which were glazed with a mild teriyaki sauce, and one piece of uni!!

If I knew that the chirashi don was so huge I probably wouldn't have ordered the futomaki haha!! After eating the futomaki, nigiri, and the chirashi don, I was completely stuffed LOL!! But I didn't feel heavy or bloated at all, since the ingredients were so light!! I would definitely come back for this hehe!! 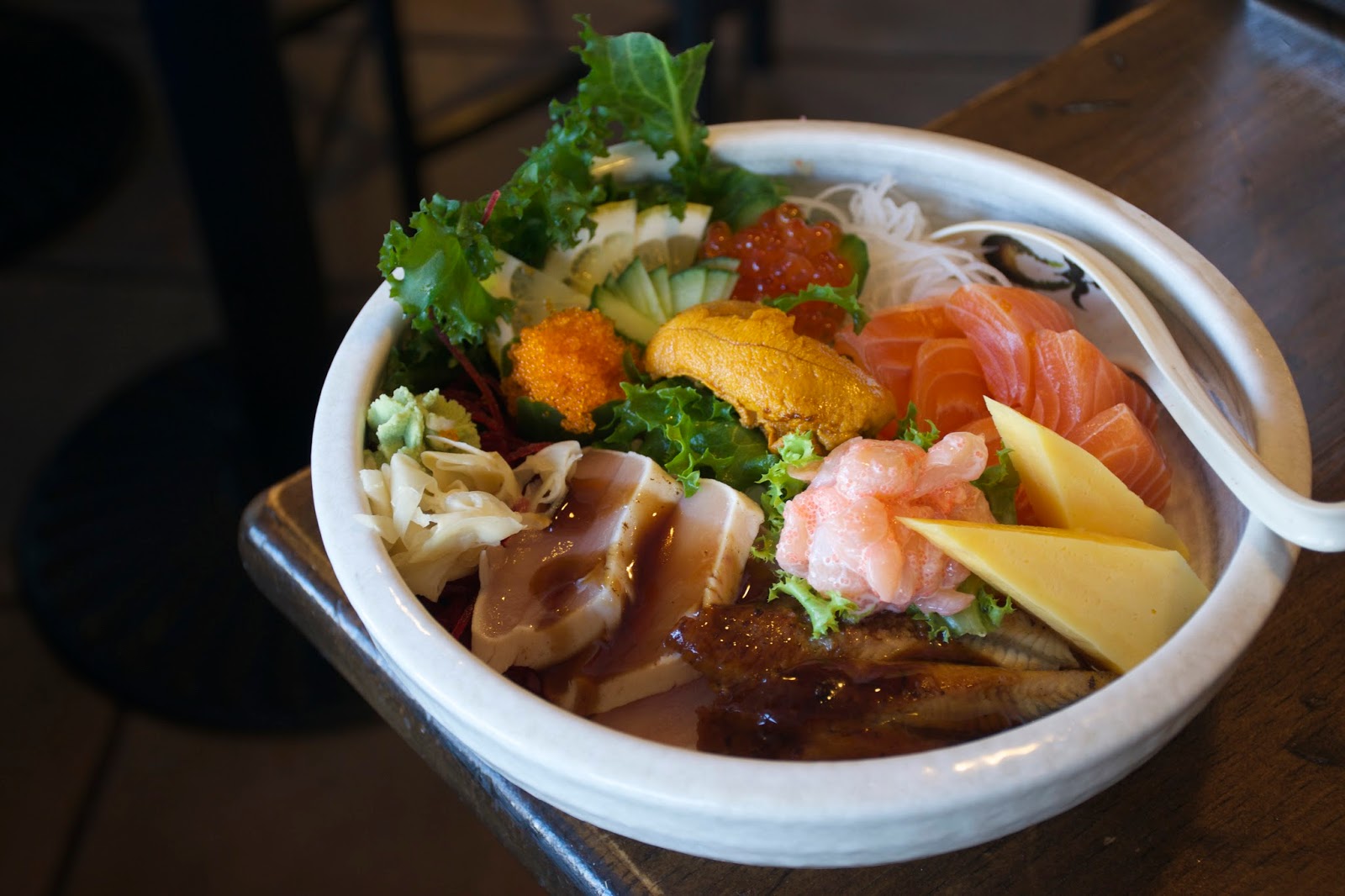 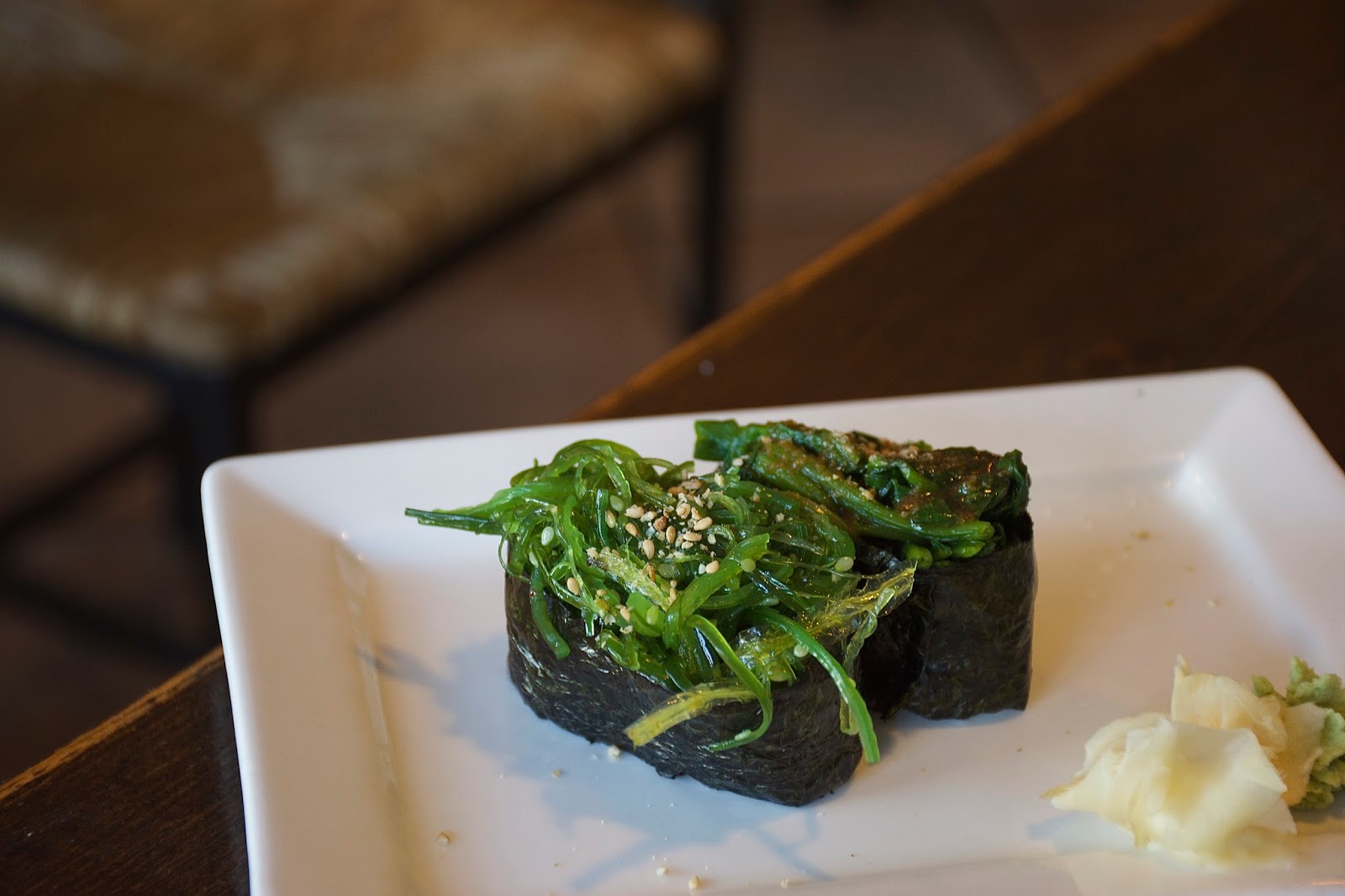 What's awesome about Sushi Gallery is they serve vegetarian nigiri!! They have enoki mushroom, yam, eggplant, radish!! I got two pieces - their seaweed salad and spinach!! The nigiri was surprisingly large, with a generous helping of seaweed and spinach on top!! The seaweed was delicately seasoned and garnished with sesame flakes, while the gomae was dressed with sesame sauce!! The rice was a bit strange, it was really warm - like freshly made rice!! The grains weren't separated and the rice wasn't vinegary enough. 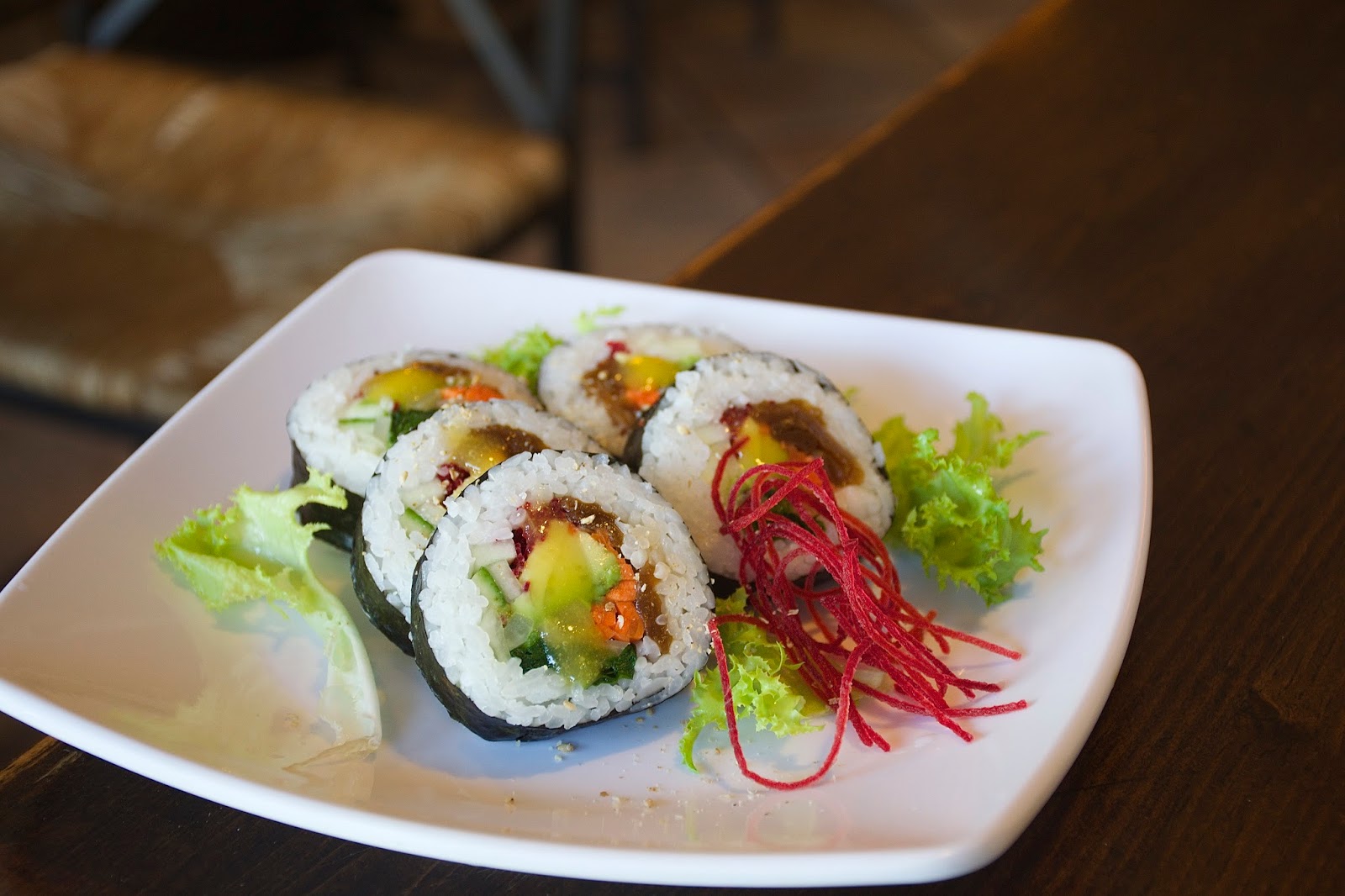 Futomaki $4.50
I thought this was going to be made out of tamago & ebi (like most futomakis!) Since I'm allergic to raw veggies I had to pick out most of the veggies, so I ended up with an empty roll LOL! If I knew it was going to be mainly veggies I wouldn't have ordered it! :(

2/5 stars
The futomaki was alright. The fact that there wasn't any tamago and ebi in it was a bit disappointing. This version just had avocado, carrots, cucumbers, pickled radish, and spinach in it. This costs more than the veggie futomaki but this was already a vegetarian roll, so I'm not sure how the veggie version would be any different? haha. The rice was a bit dry and it didn't have that distinctly sour tone. The citrus dressing they drizzle on top is really yummy though, it's sweet, tangy, and citrusy!! 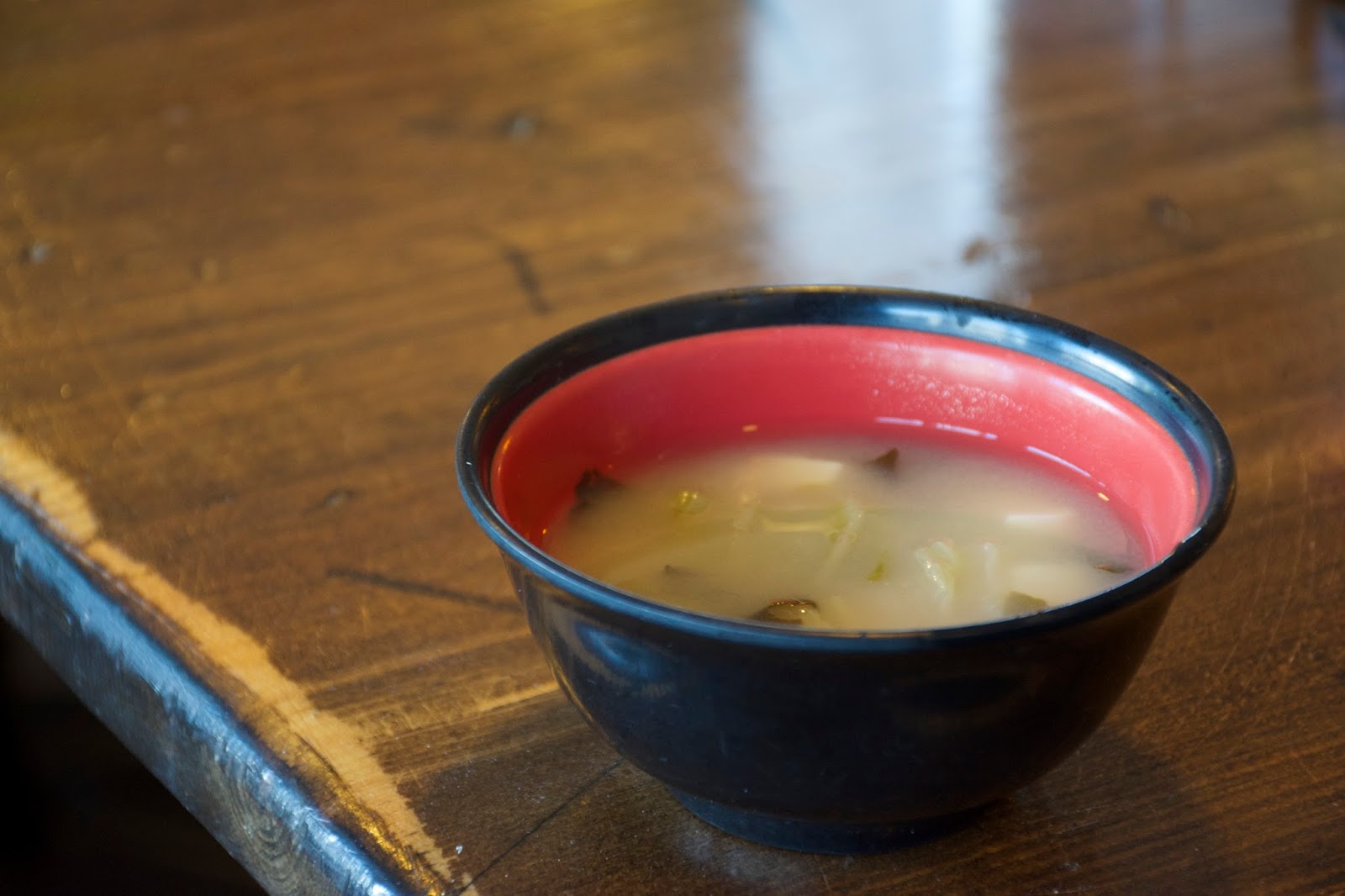 Gluten Free Miso Soup
3/5 stars
Yay for free refills!! For free soup - this was really good!! I managed to scoop up a ton of tofu and cabbage hehe!! It wasn't too salty and the miso flavour was pretty strong!! Not bad, not bad at all! :D 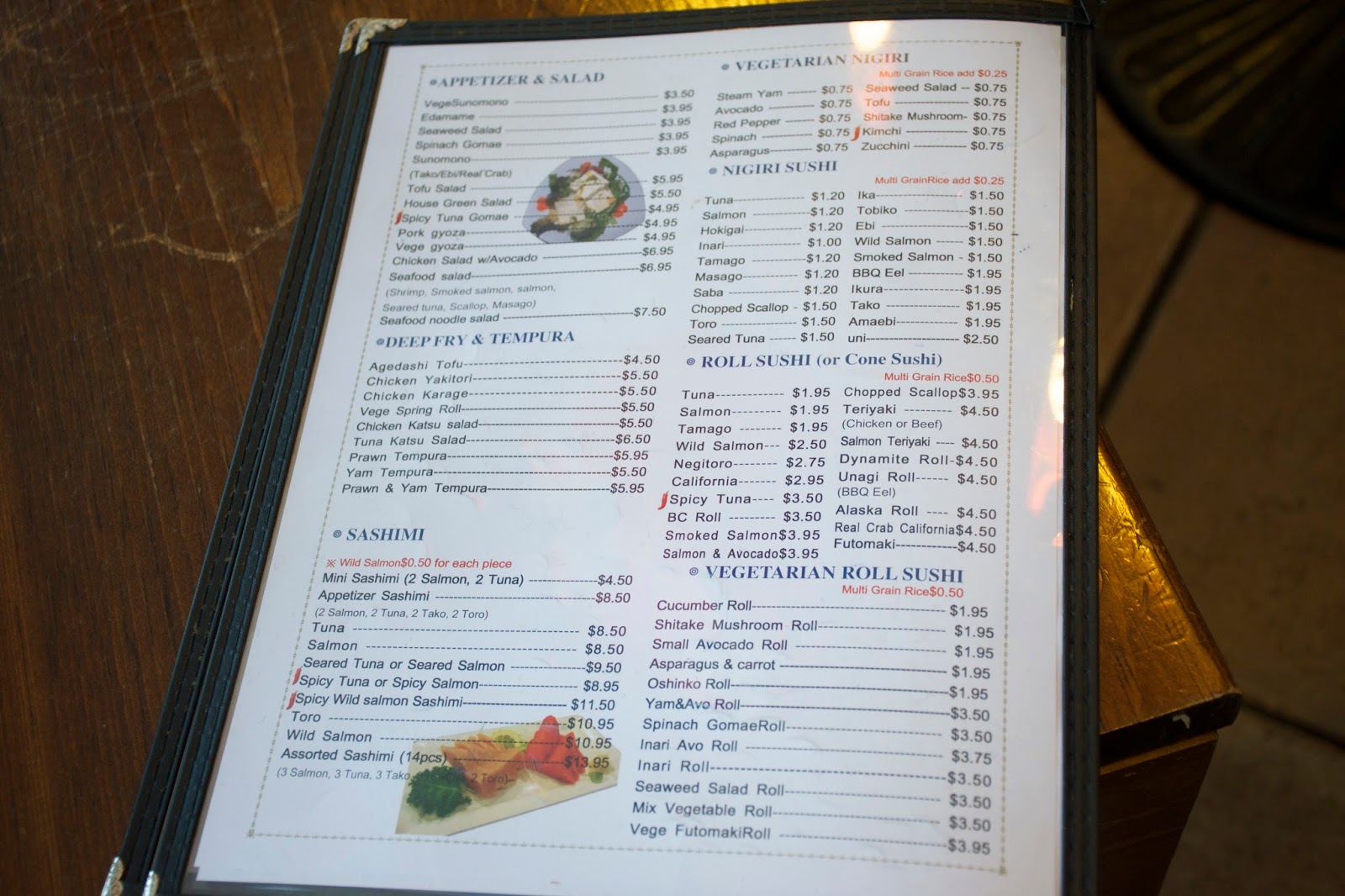 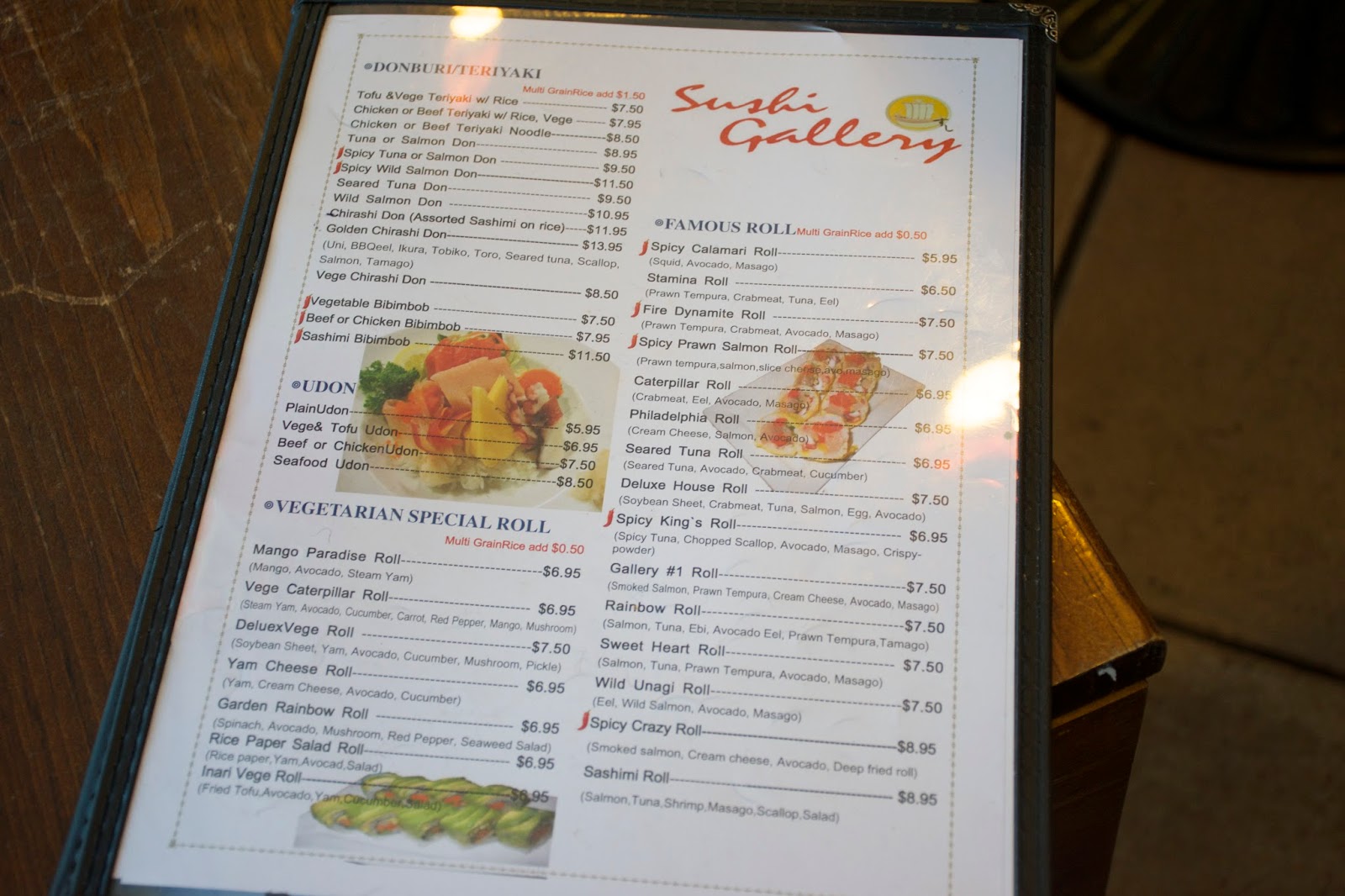 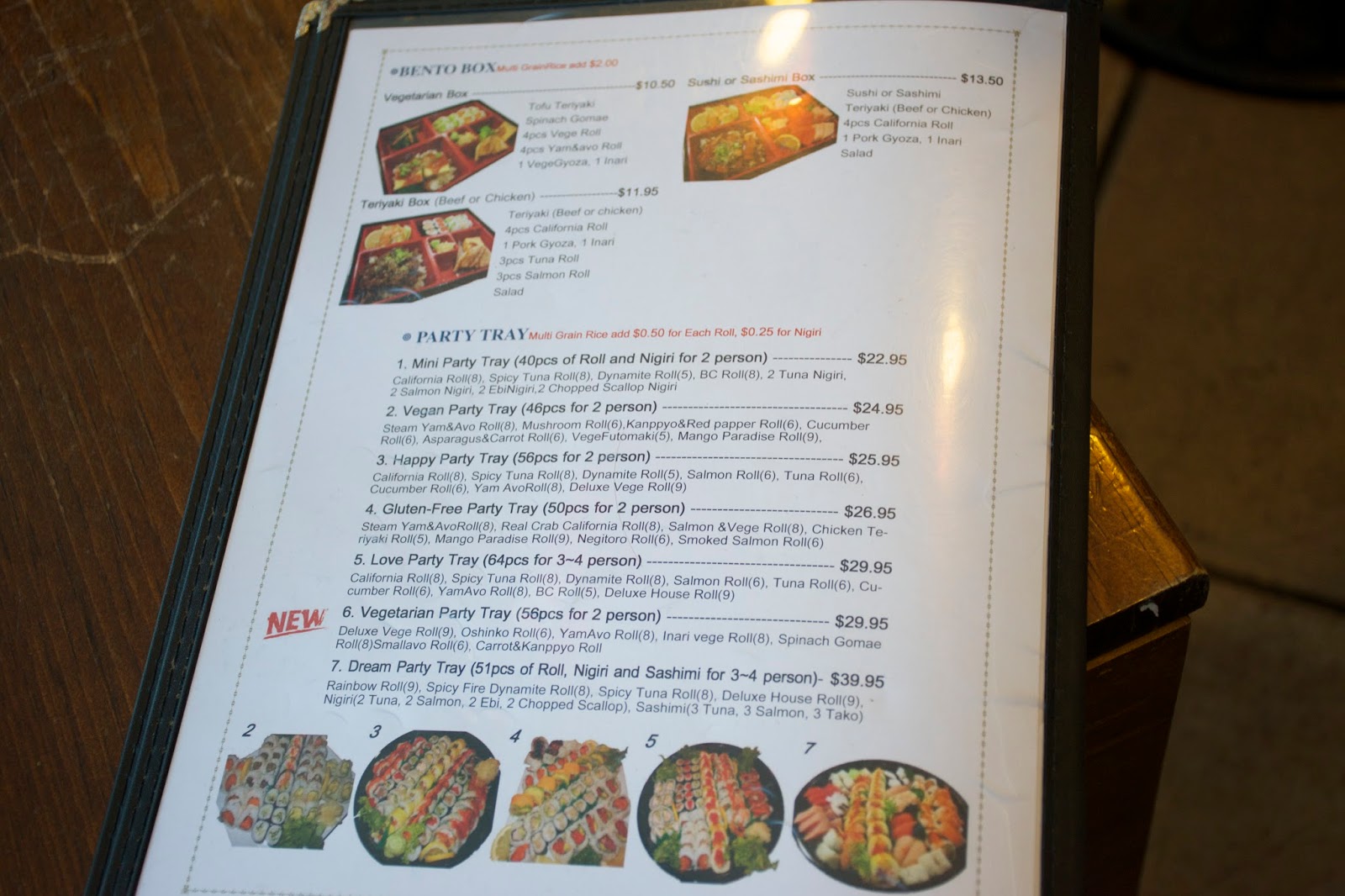 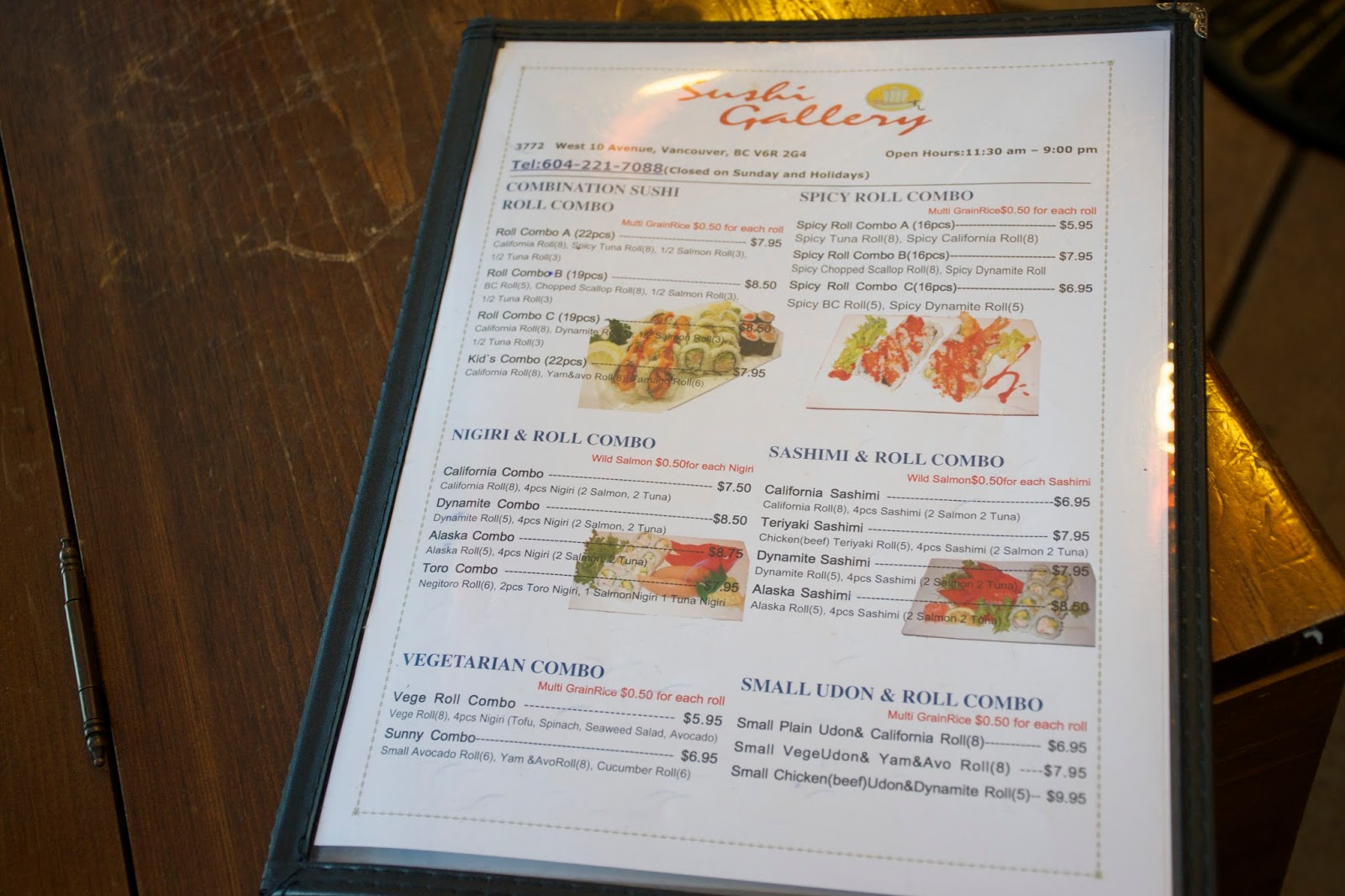 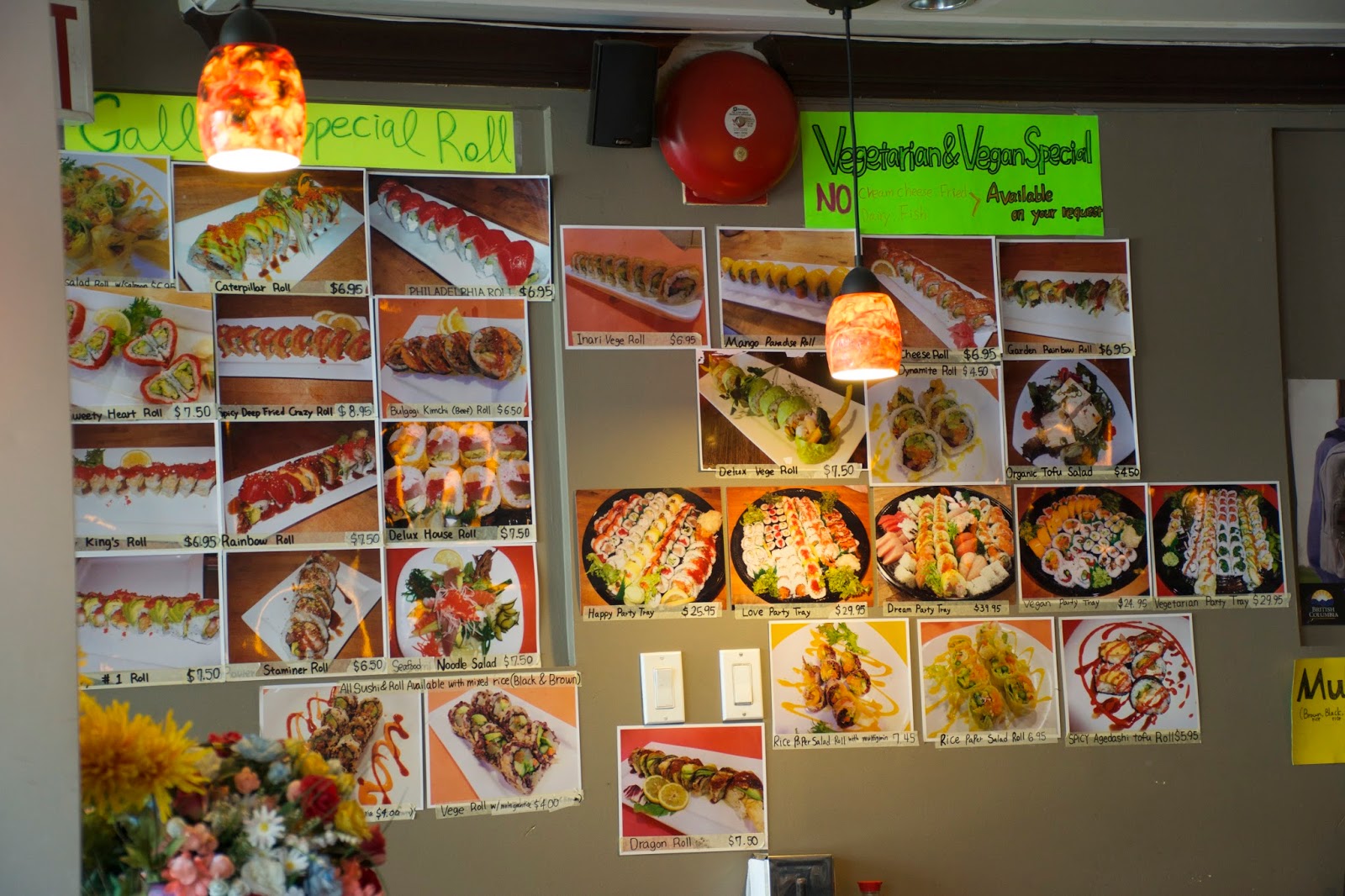