Note - I forgot to take a storefront photo but I think you guys all know what T&T looks like LOL!

I use to eat T&T combos ALOT back in highschool. It was my thing. I remember when it use to cost $5.50, now it's around $6.95 LOL. Yep, to my 14 year old self, it was pretty satisfying hehe. My go tos would always be the honey garlic chicken, s&s pork, dry ribs, and bean curd!! I would always take my food upstairs and eat in the metrotown food court!! When I lived with my mom we never ate out, so eating at T&T was a treat!! I also ate their fan twan (rice rolls) alot, and their dim sum!! :D


Eating at T&T was definitely really nostalgic - brings back so many memories of my mom "awarding" me with a T&T combo after I got an A on a test haha!!  Now that I've matured a bit (still have some more maturing to do) my tastebuds no longer crave mediocre prepared food LOL - but I'm not going to lie - I still enjoy a T&T bento once in a while ;)

So the other day my dad wanted to eat at T&T because he didn't want to spend $20 for lunch -between the two of us we ending up spending about $13 - which made him really happy! He was like "Why can't you eat at T&T everyday?!"

The day that we went they were promoting their new baozis!! They had a ton of different flavours like 3 cup chicken, Taro, Char Siu, Mung Bean, etc. Yea, the 3 cup chicken totally sucked me in LOL!! I've never seen 3 cup chicken in baozi form before!! So of course I had to try it ;)
The baozis were actually a really good deal - for $3.99 you get 3 huge baos!! :D

The lady who was selling the baos was super enthusiastic - in the hundreds of times I've been to T&T I've never seen someone as enthusiastic as her LOL! It was the way she said it - she was really peppy and had this huge smile on her face - which made me want to try the baos even more lol! She was like "We have new baozi!! They're so yummy, I promise you!! Would you like me to pick some out for you? We have so many flavours, they're all good!!" 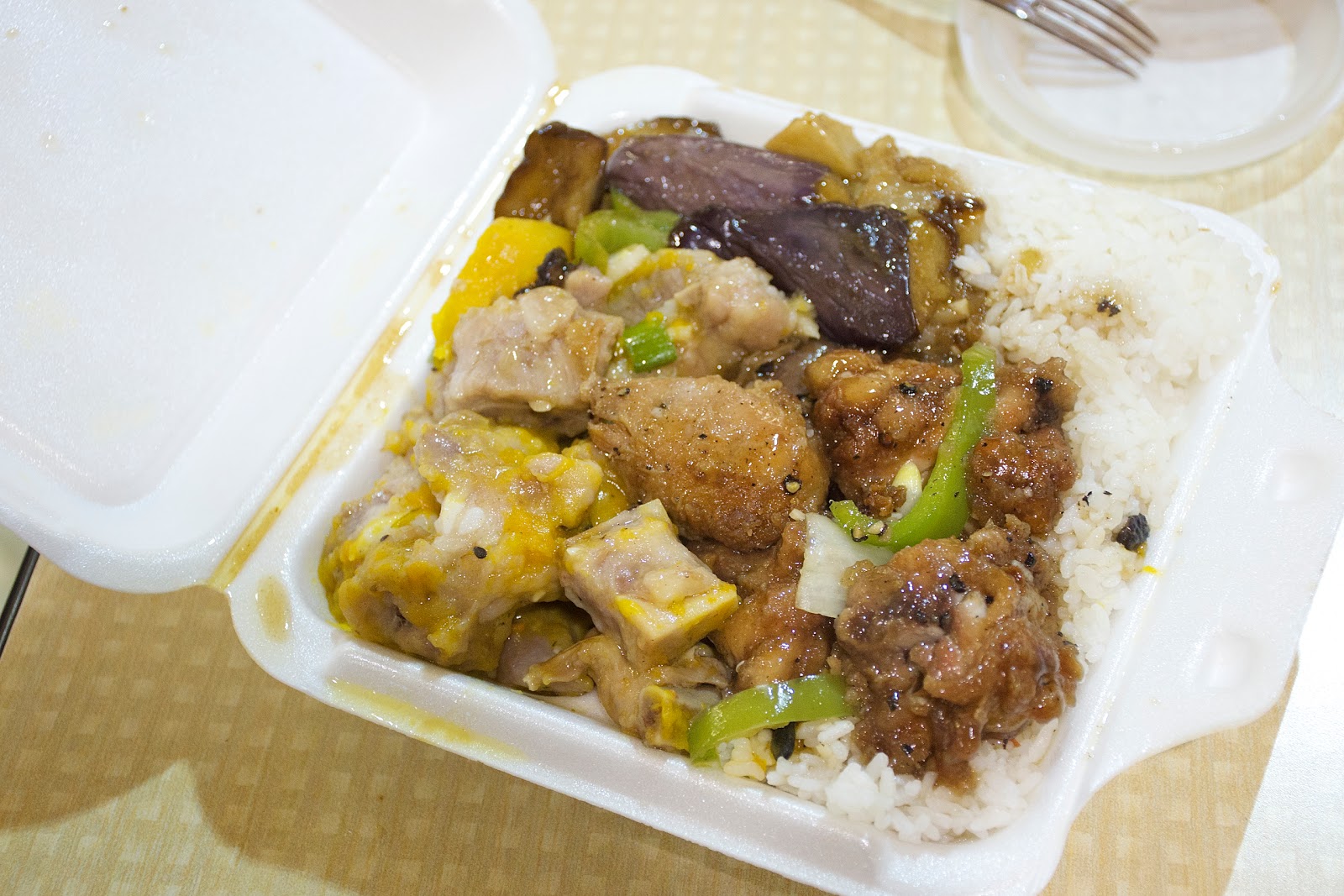 You know what? This actually wasn't that bad - if you ignore the grease factor LOL! The spareribs were decent - and the pumpkin gave it a nice sweetness! It was a bit fatty so it wasn't dry at all! The honey garlic chicken was predominantly sweet - with just a hint of garlic. The eggplants weren't too mushy but (as you can tell from the picture) super greasy!! The rice was pretty meh - it gets soggy from all the moisture - they do give you quite a bit though. The portion size was actually pretty large so we ended up sharing it! 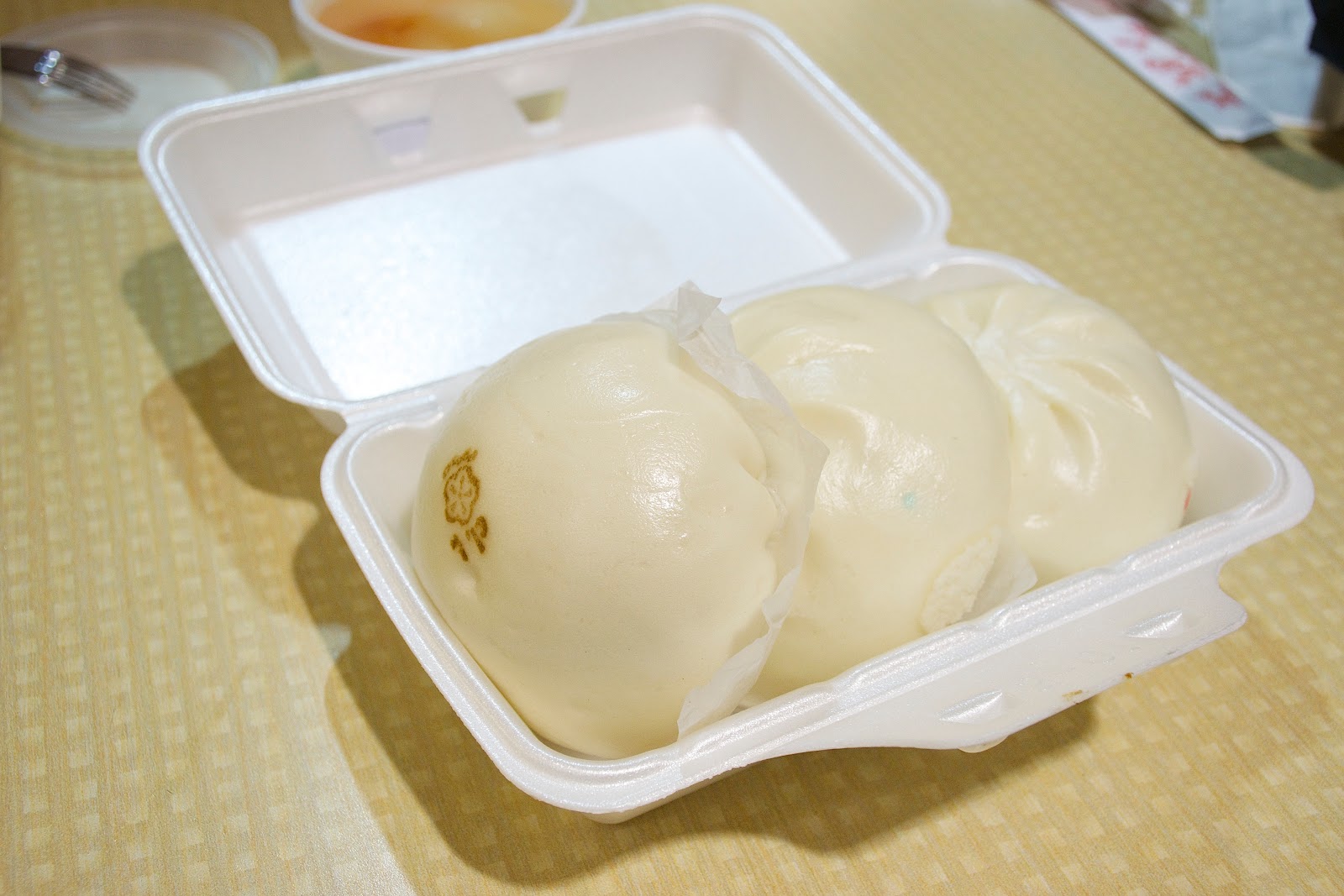 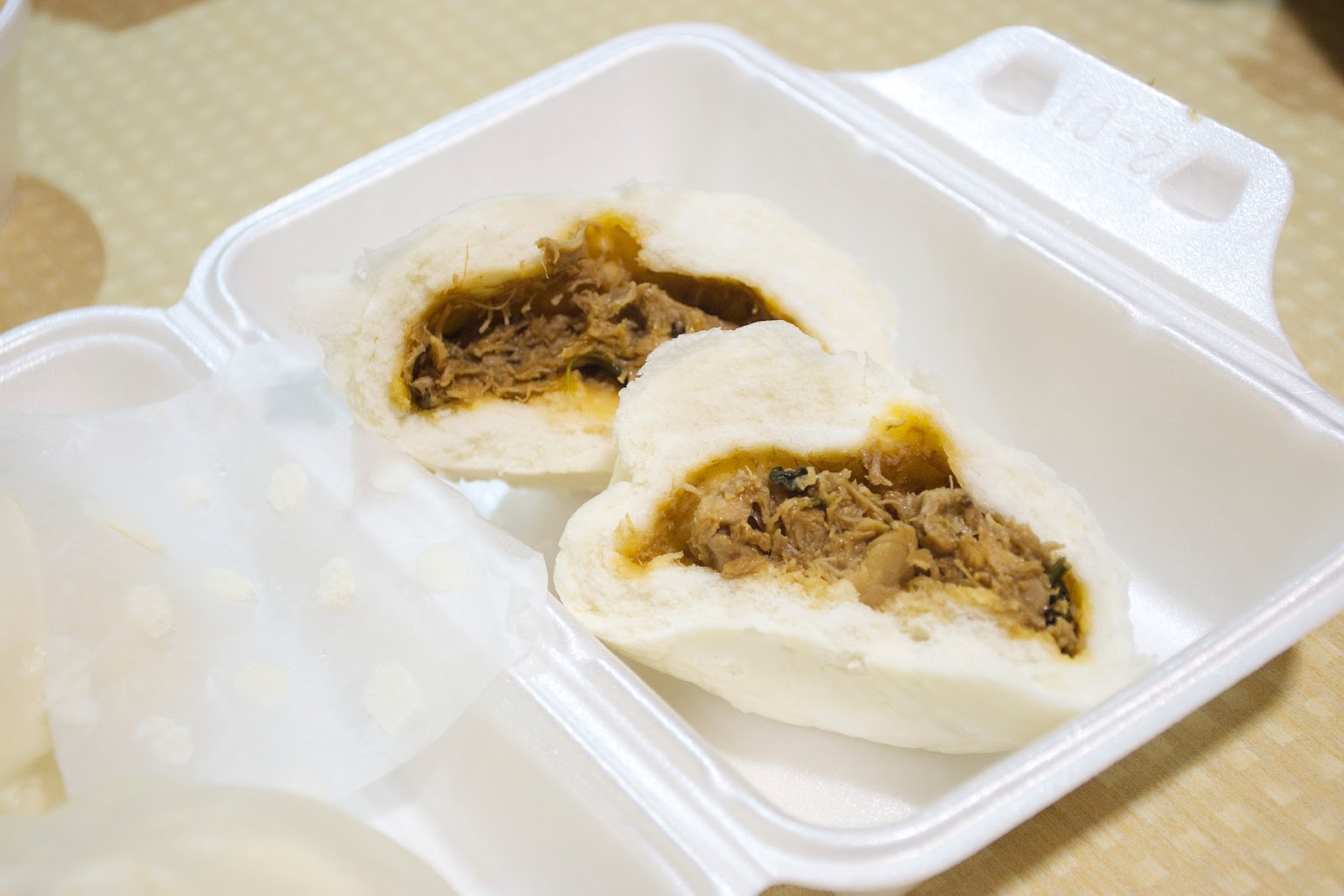 This is the first time I've seen a 3 cup chicken baozi!! 3 cup chicken is pretty popular now - so I guess they're trying to capitalize on its popularity haha!! The bun itself was pretty decent - springy, soft and milky tasting. The filling though - was really disappointing. It didn't taste like 3 cup chicken at all!! I could see - and smell the spices, but the flavours just fell flat. The bao itself was pretty large though so we did end up full! 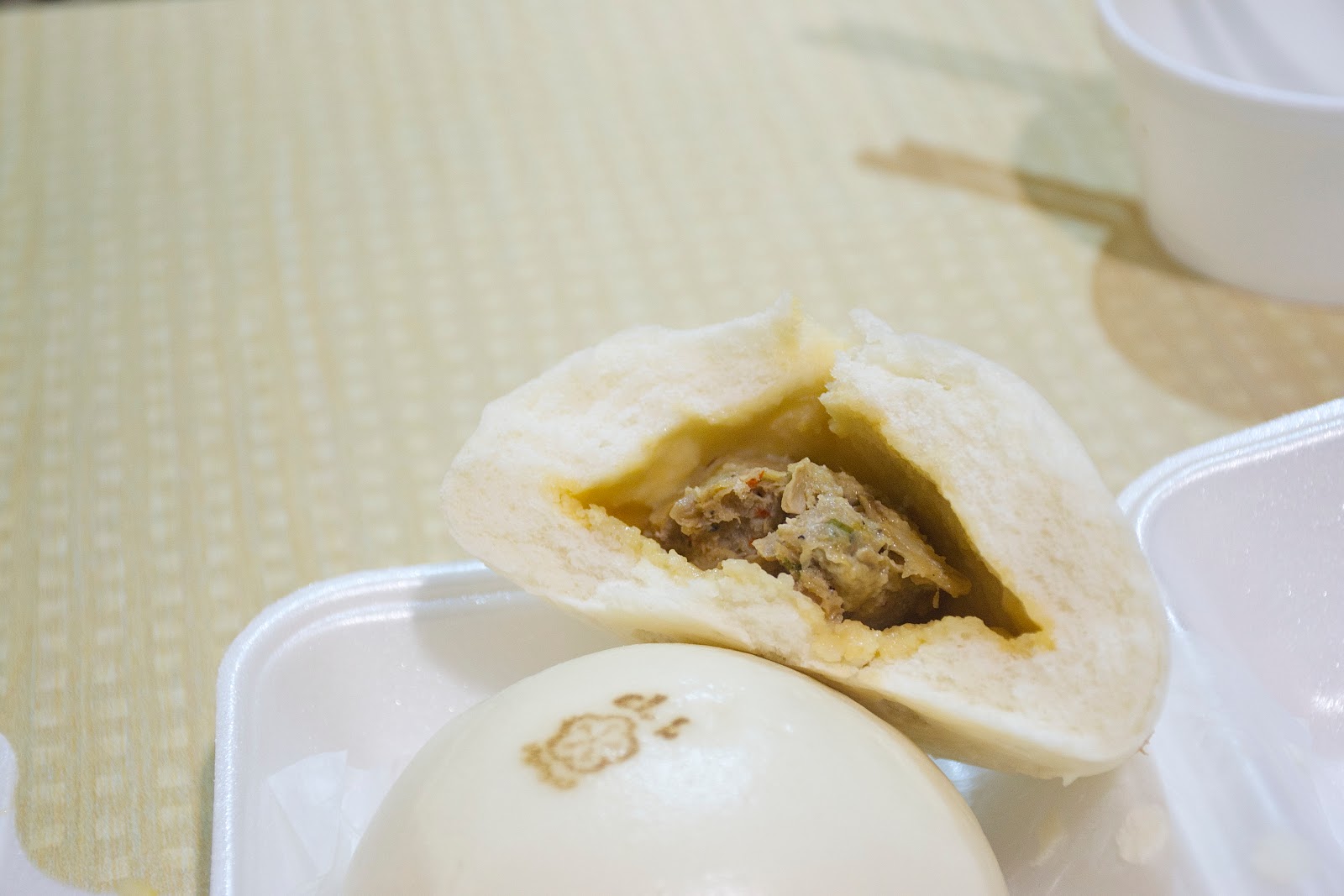 The szechuan baozi was a lot better! It was pretty spicy, and tasted like a typical spicy sezchuan dish! The chicken was relatively moist and pretty flavourful! Pretty enjoyable! We also got a mung bean bun, but we ended up bringing it home because we were already pretty stuffed haha! 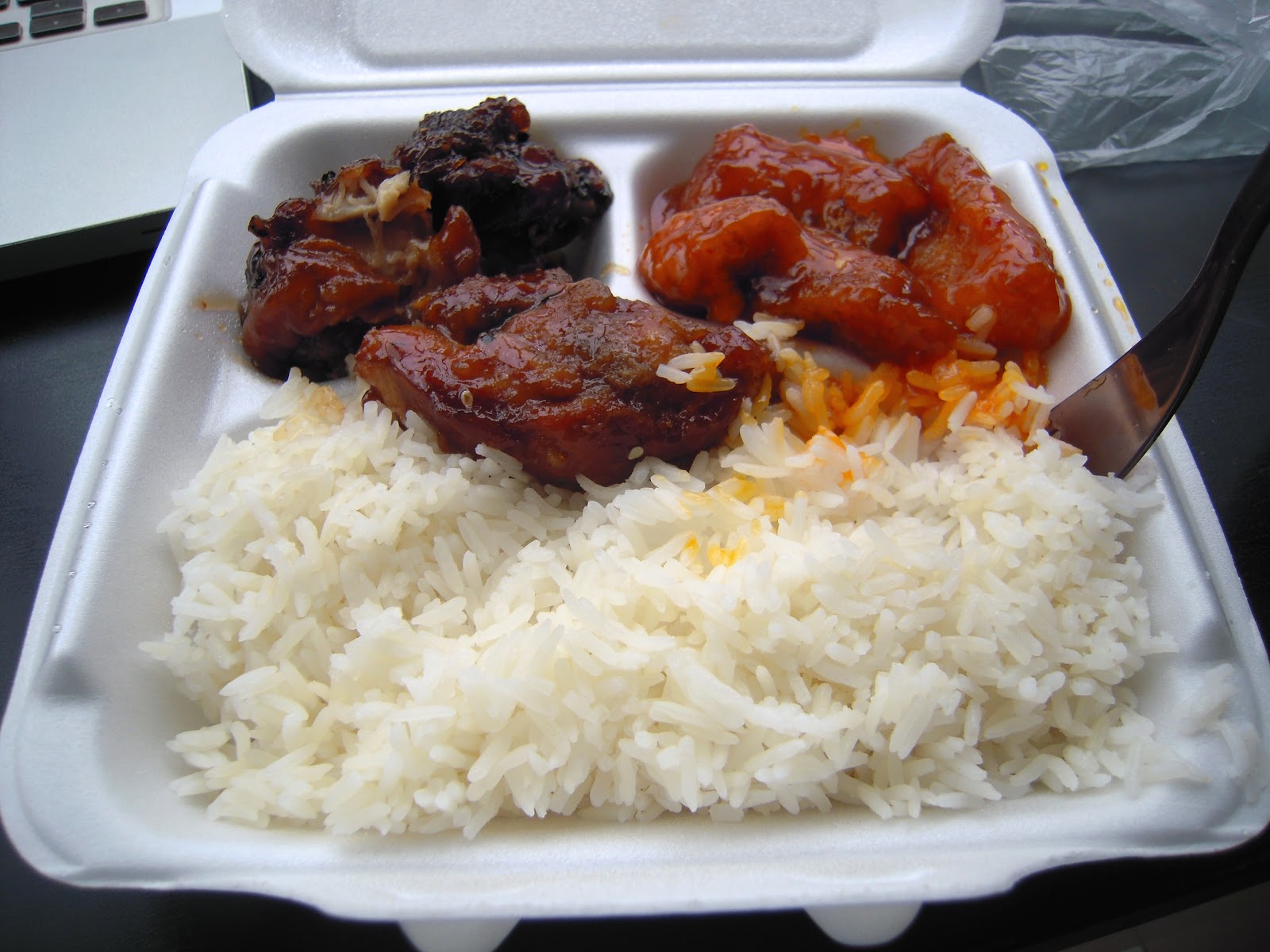 Omg...I dug through my archives and found this super old picture of T&T bento from highschool LOL! As you can tell - I was all about the honey garlic spareribs and s&s pork!! ;)