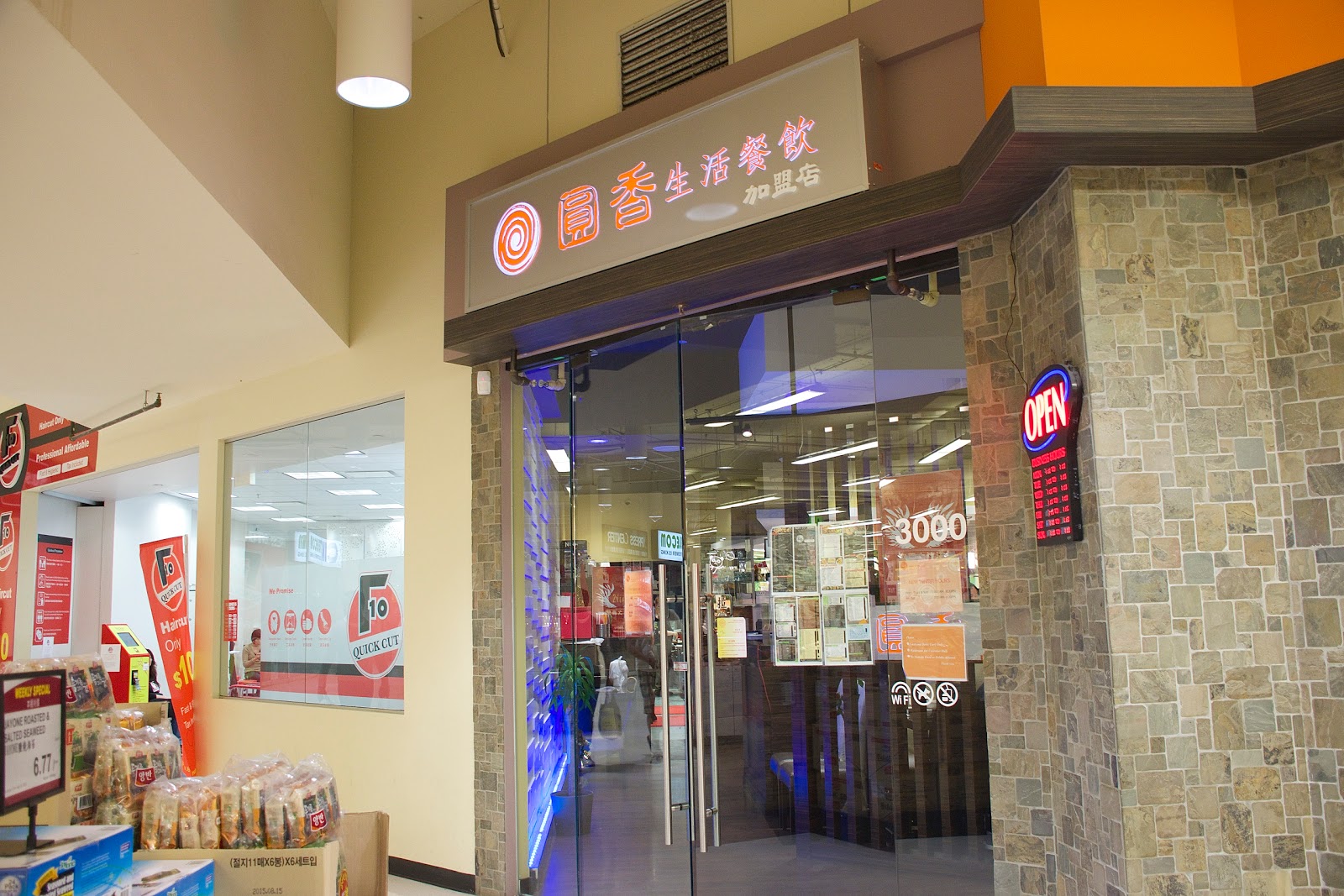 Note: I'm been having a few issues with my health lately, chronic fatigue + anemia, so I've decided to hold back a little on the blogging (for the sake of my health.) I'll still be posting regularly a few times a week, but probably not on a daily basis, I hope you're all okay with that <3 Thankyou so so much for understanding - you guys are honestly da best!! :D

Blogging everyday is pretty exhausting, and tbh, it's taken a bit of a toll on my already not-so-great health haha. I spend a lot of time typing up posts/writing pictures and I usually finish blogging around 12- 1 am at night because I'm so busy with other stuff during the day!

Especially since school started, it's been exhausting balancing this blog and my grades, and it's taken a toll - physically and mentally. I love you guys so so much, and blogging honestly changed my life!! But sometimes the work load can be a bit much - you guys get it right? :)


Things will still be the same, with the exception that I won't be posting everyday!! I hope you still stick around - cause there's still lots of fun times ahead!! :D

Anyways - back to the post!! You guys probably don't know this, but my dad and I actually go to Pearl Castle every week!! That's right, EVERY week! :D  My dad sure likes this place!! At first I wasn't so convinced, but it's quickly becoming one of my favourite taiwanese restaurants!! And now that it's become one of our regular spots, I'm not complaining ;)  I've tried around 20 or so of their dishes over the past 2 years - and sooner or later I'll probably go through their entire menu!! ;)

Pearl Castle is a Taiwanese restaurant best known for their salt peppery, 3 cup chicken, hotpots, and bubble tea but once you deviate from those items, there's so much more on the menu that's just as amazing!! Even the not so popular dishes like their angelica chicken point, sour fish nuggets, and house sauce chicken really impressed me! I also like how the quality's pretty consistent within each location (it varies across locations though!) I've been to every one of their locations, but my favourite location is the one in Continental Centre! 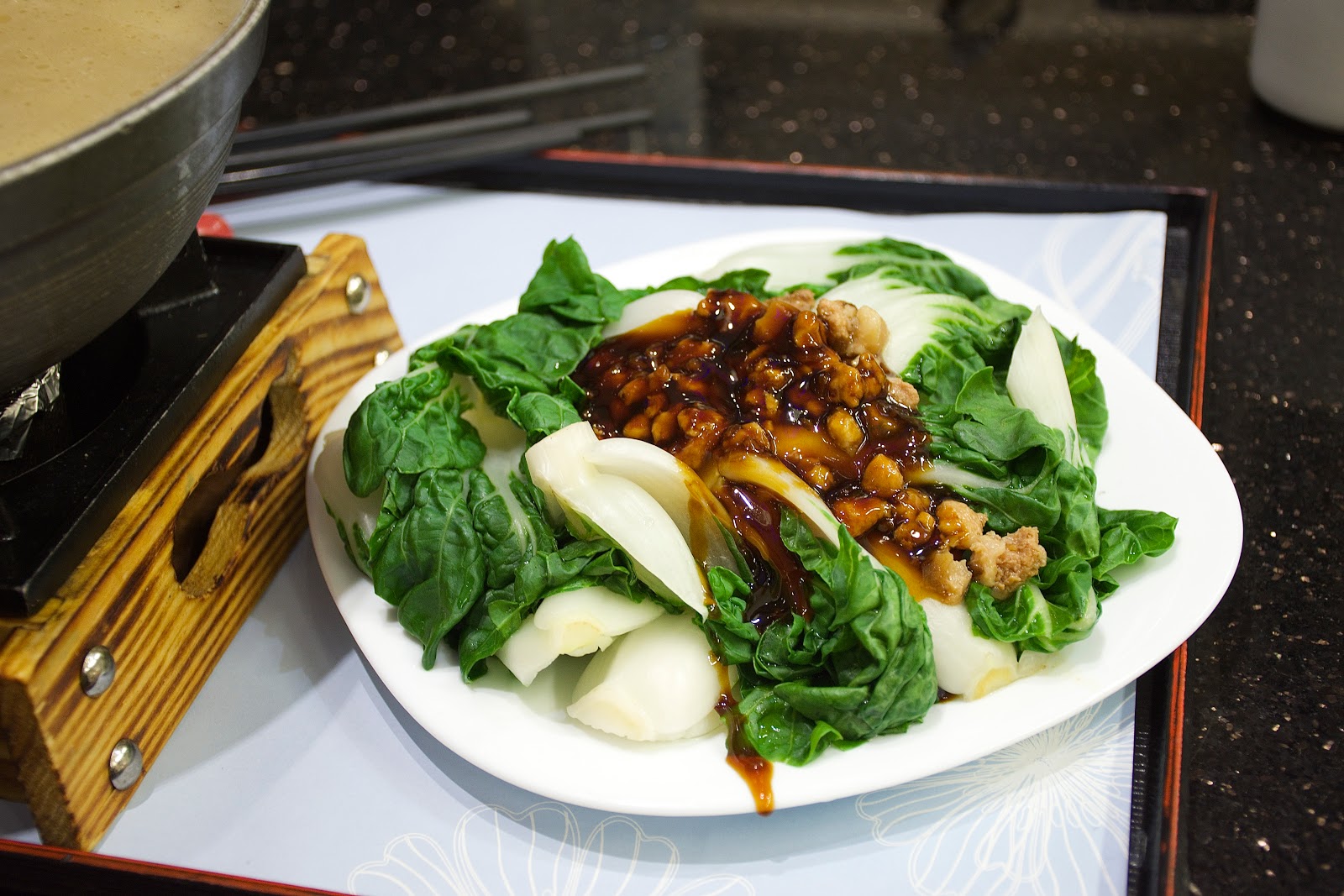 Veggies w/ Minced Meat
3.5/5 stars
This is such a simple dish, but it was executed pretty well! The bak choy was lightly steamed so it was still a bit crispy, and the minced meat was really flavourful and added to the dish!! Probably not worth the money we paid for it though, almost $5!! 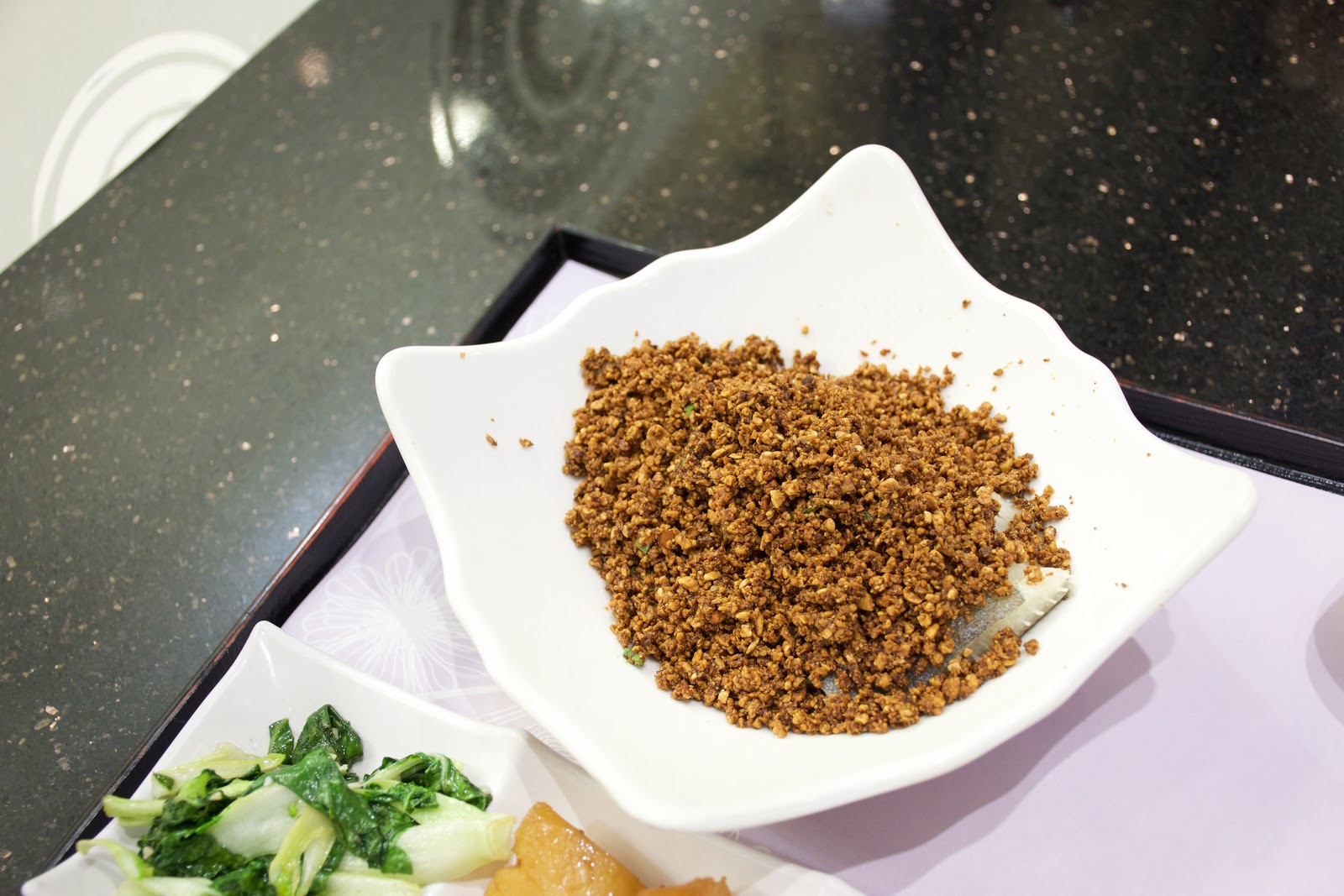 Cod w/ Crispy Soy Beans
3/5 stars
A classic Taiwanese dish!! It's not a "mainstream" Taiwanese dish so not alot of people know about it!! Pearl Castle's version is pretty good - but I still like the one at Kalvin's alot better. The soy bean crisps were indeed crispy and really fun to eat!! The cod on the bottom was quite large and super smooth!! Seafood Fried Noodles
2.5/5 stars
Of all the dishes I've tried here, this was probably my least favourite. Yes, the noodles were cooked al dente and chewy, but beyond the initial seafood flavour, it starts tasting really bland. There was a decent amount of seafood in there though, and the portion size was quite large! 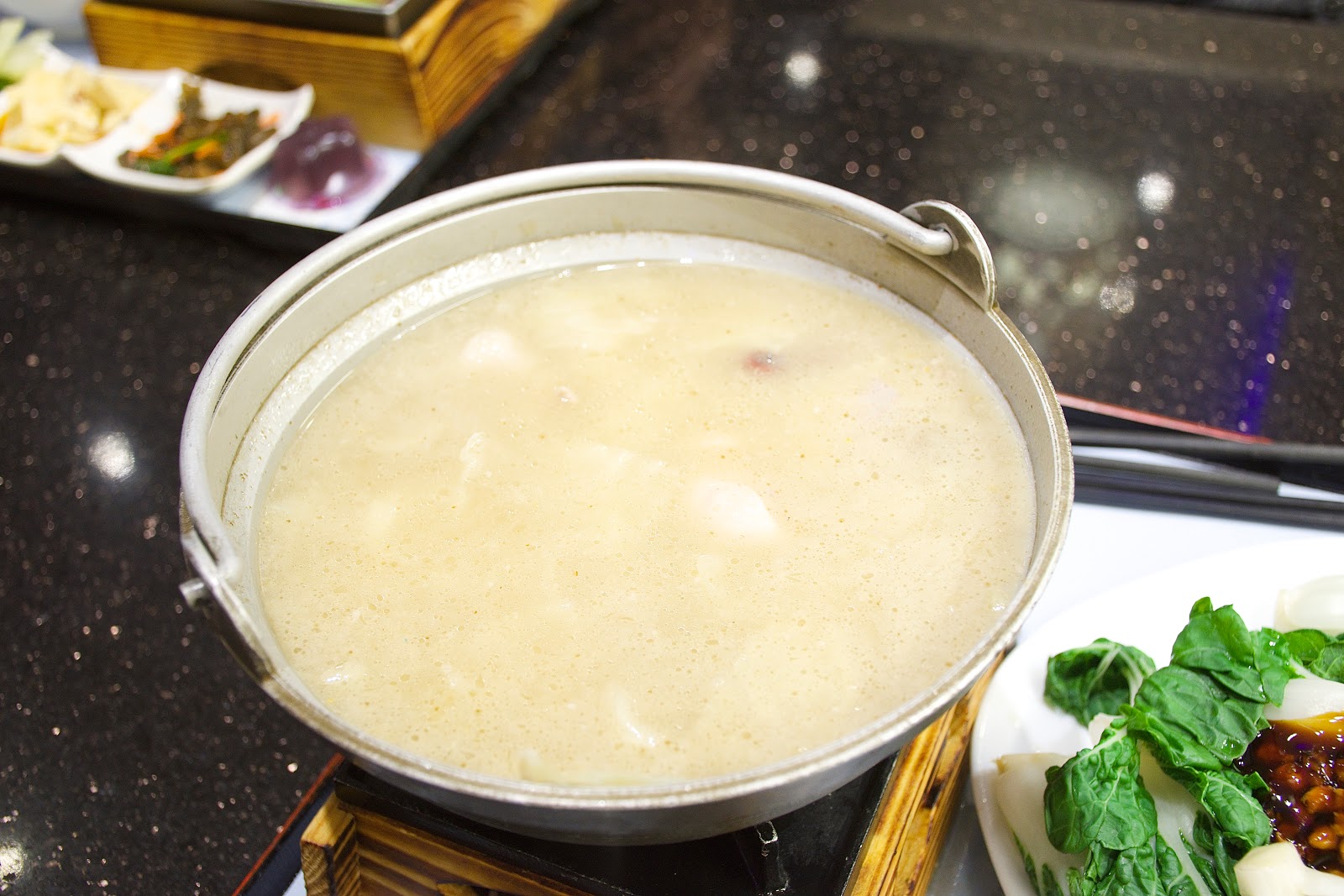 I'm not sure what angelica refers to, but apparently it's some kind of chinese herb!! The flavour was lovely and really strong! The broth itself is super fragrant and quite light lasting, and was lots of chicken inside! This also came with a bowl of rice! 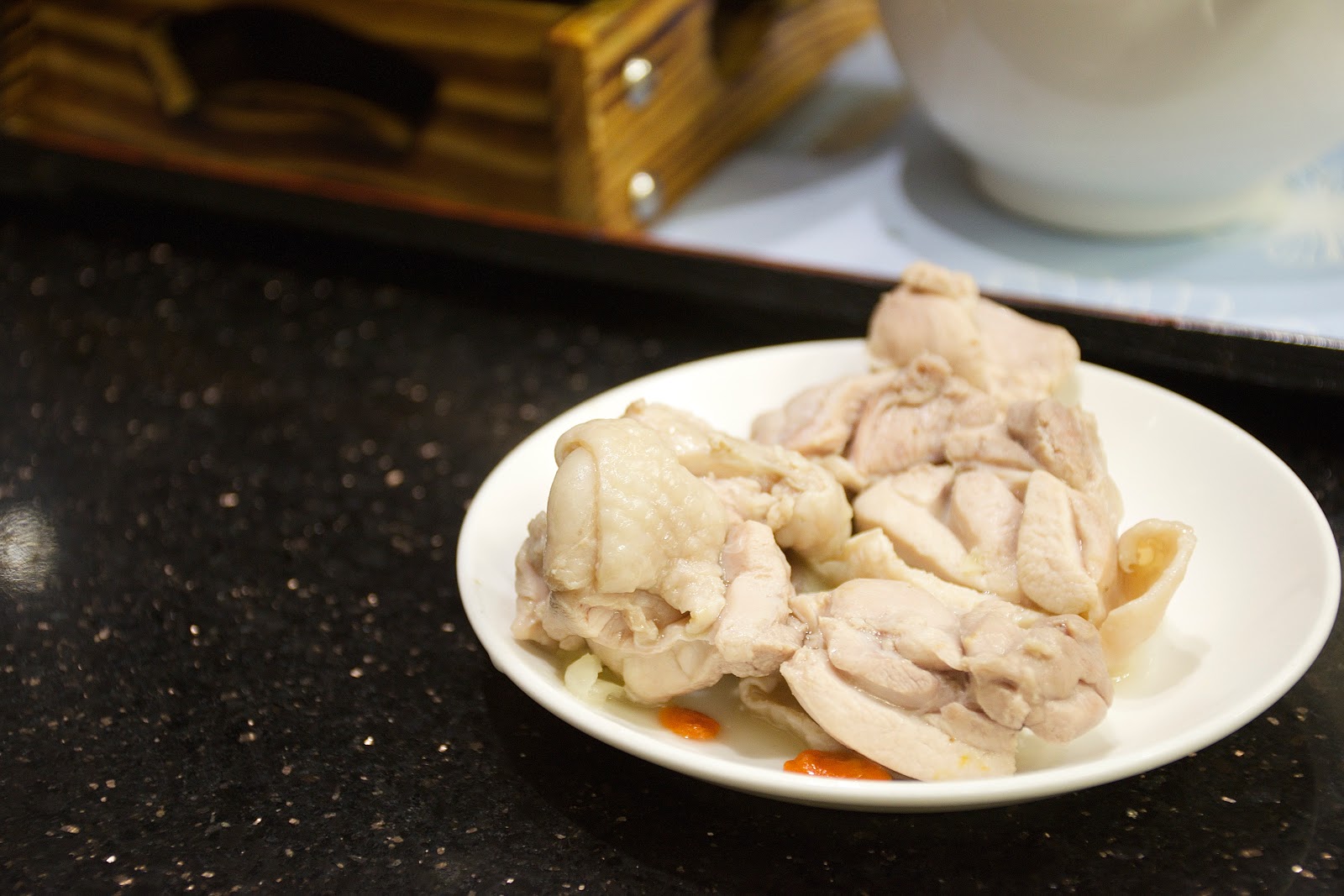 I took out some of the chicken so I could take a picture haha!! 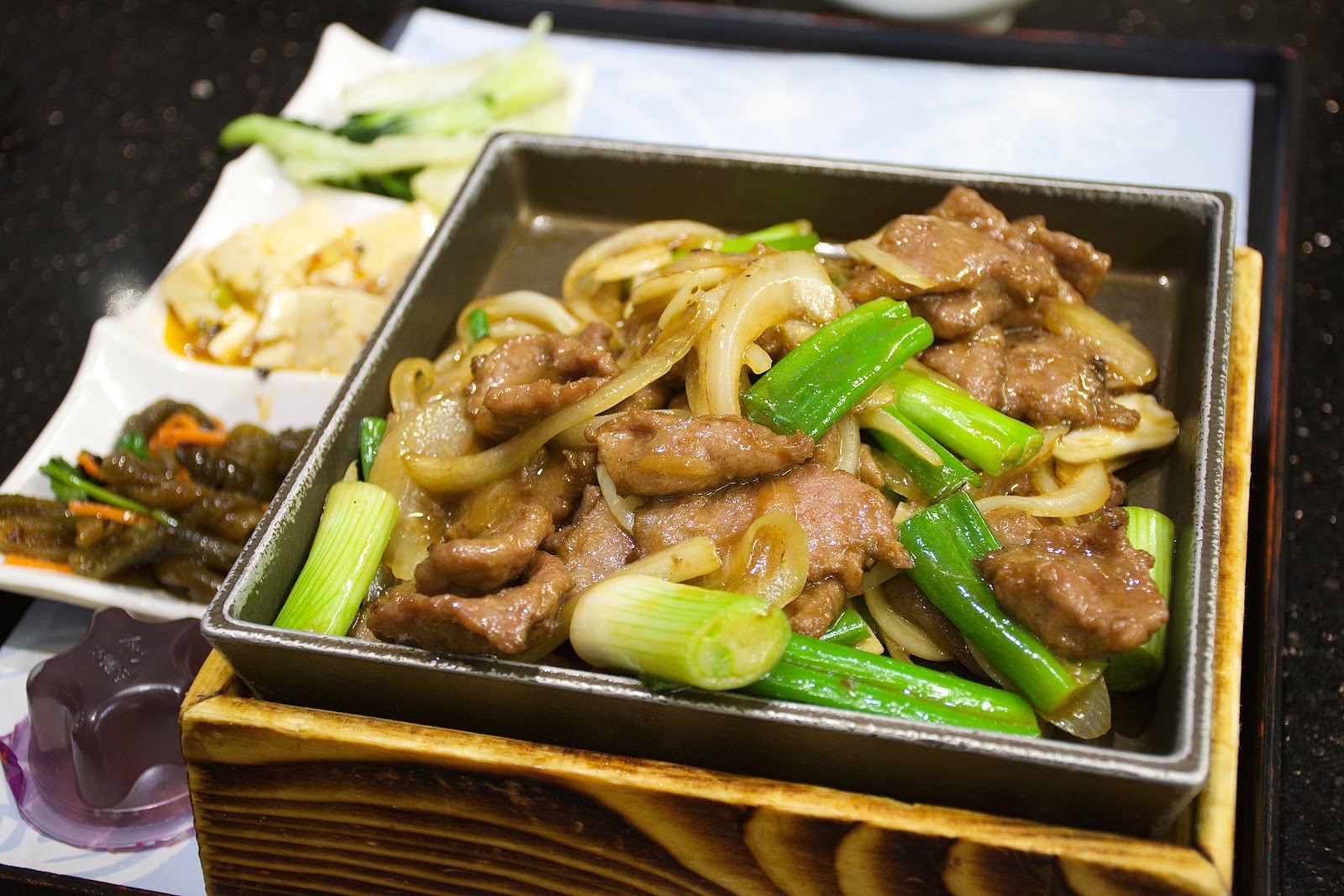 Beef & Chives Meal
3/5 stars
My dad had this, and it got his approval! This thing was massive, and it came with a ton of tender, generously sliced beef! The chives made the dish really fragrant and added a lot of flavour!! Definitely super filling!! 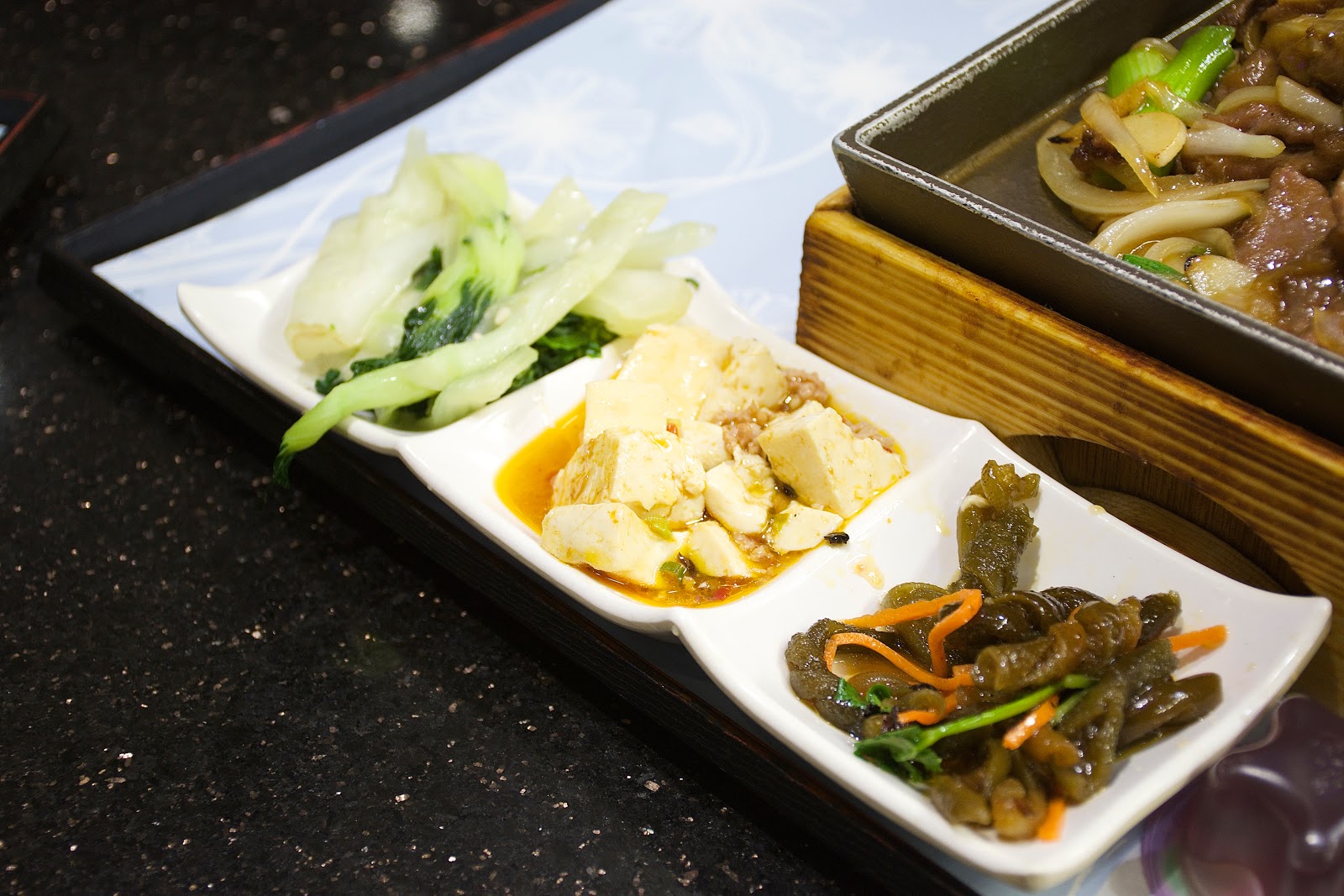 Side Dishes
3.5/5 stars
I really like the side dishes at Pearl Castle - they're so much better than the ones at Bubble World and Bubble 88!! The side dishes change everyday - the seaweed we had that time was really yummy! 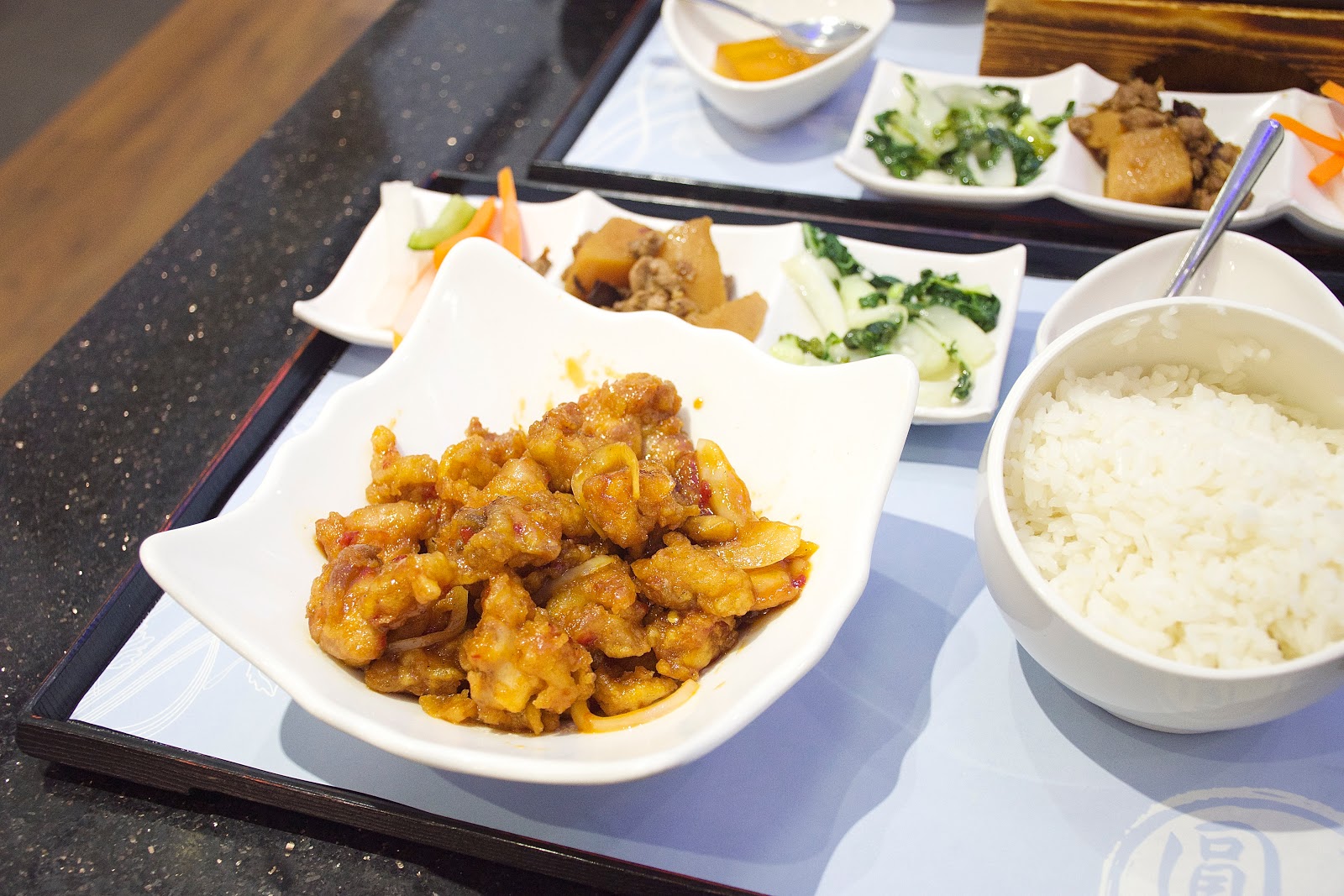 This was pretty good! Taste wise - awesome, because it had a nice balance of sweet/spicy flavours, and it packed a punch!! I didn't like how the batter was a bit soggy though - it wasn't all that crispy, it was actually more "wet" in texture. 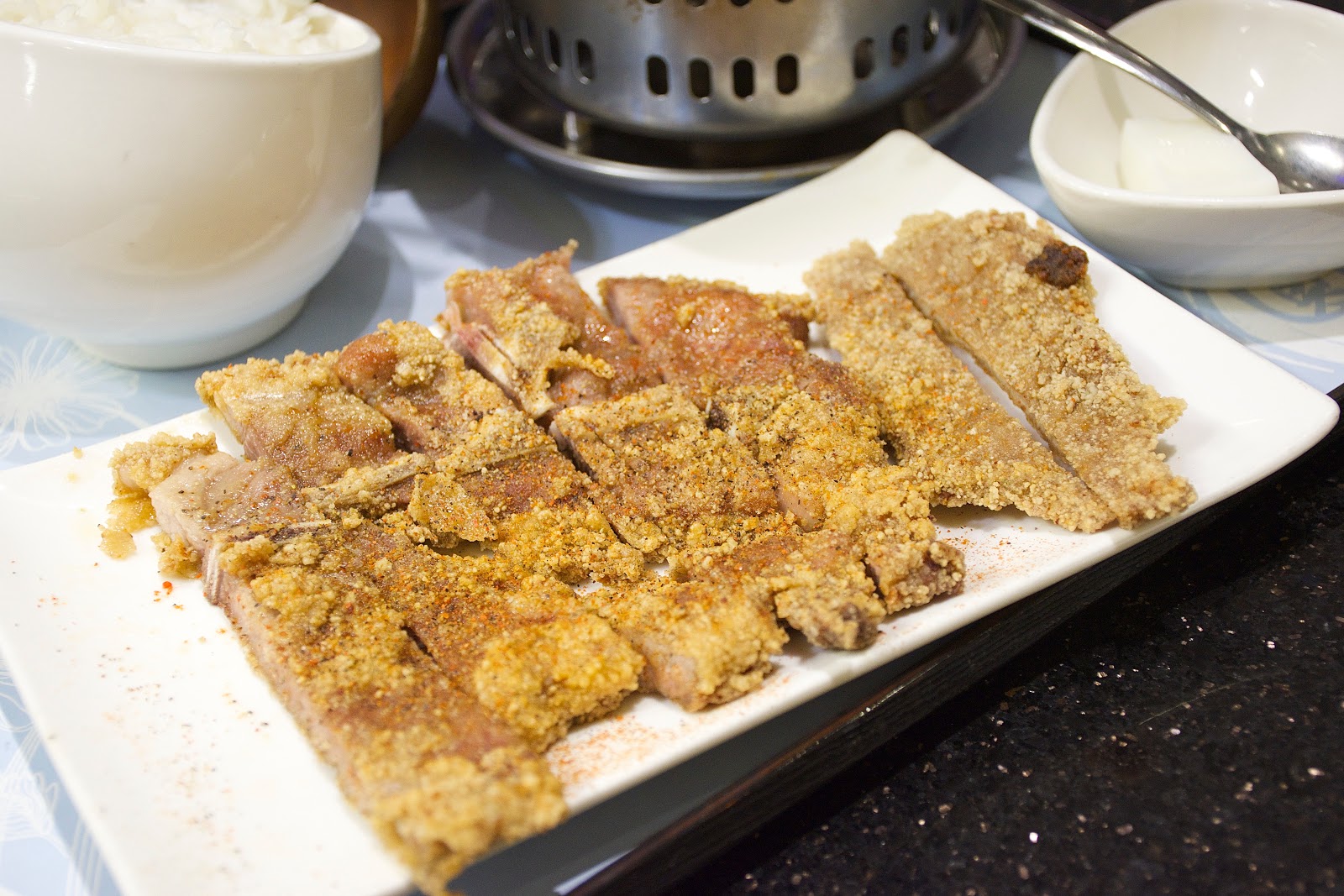 This came with my dad's apple curry hotpot!! The pork chop was pretty good - it's seasoned with a mixture of paprika and 5 spice, so it's really flavourful! It was really crispy and the inside was quite juicy! This is different from their regular pork chop, the breading and the seasoning is different! 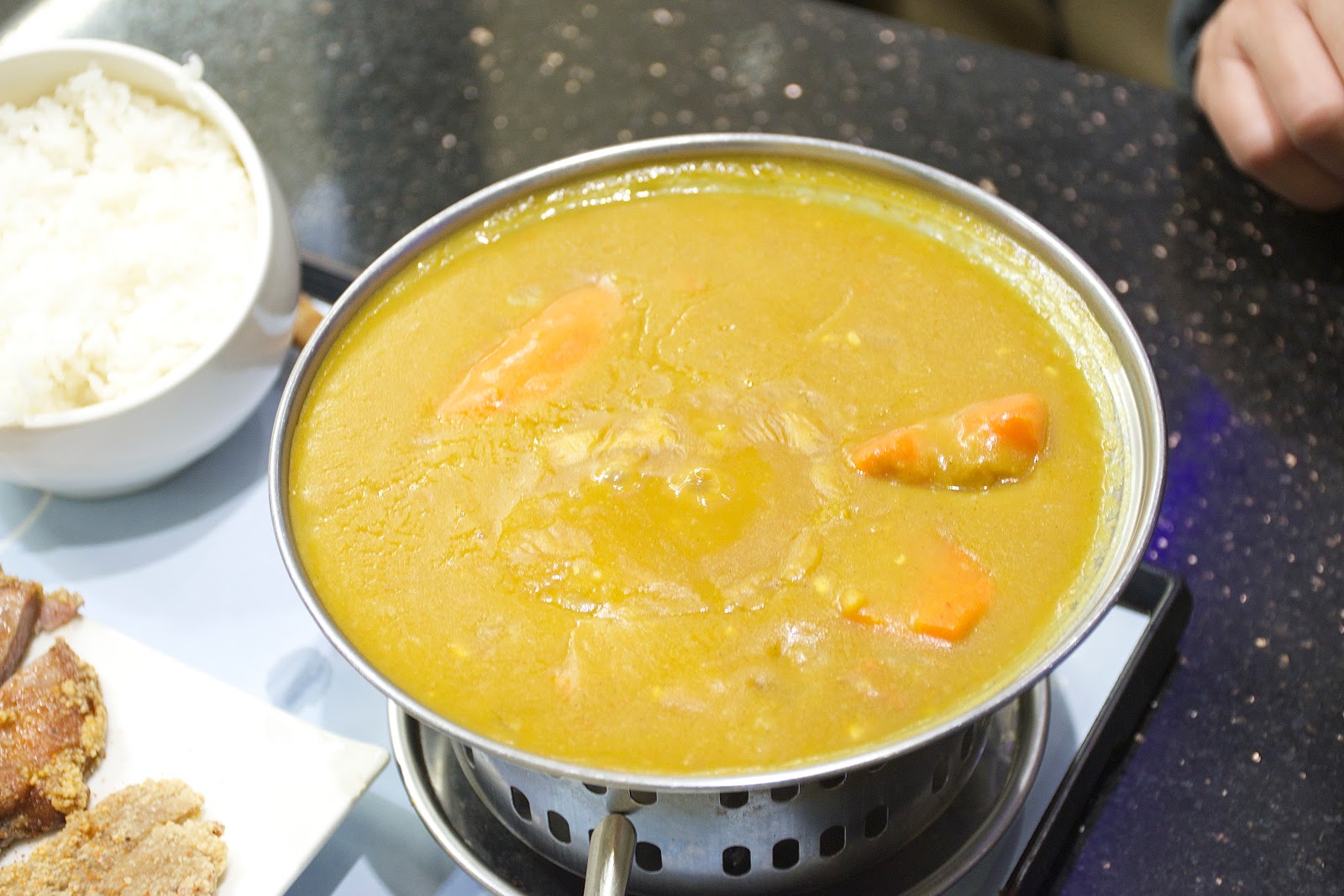 We both really liked this! It's different from your typical asian curry, it was more of the sweet side, and it did taste a bit like apple!! It was a wee bit spicy. The consistency was great, not too thick or watery either! 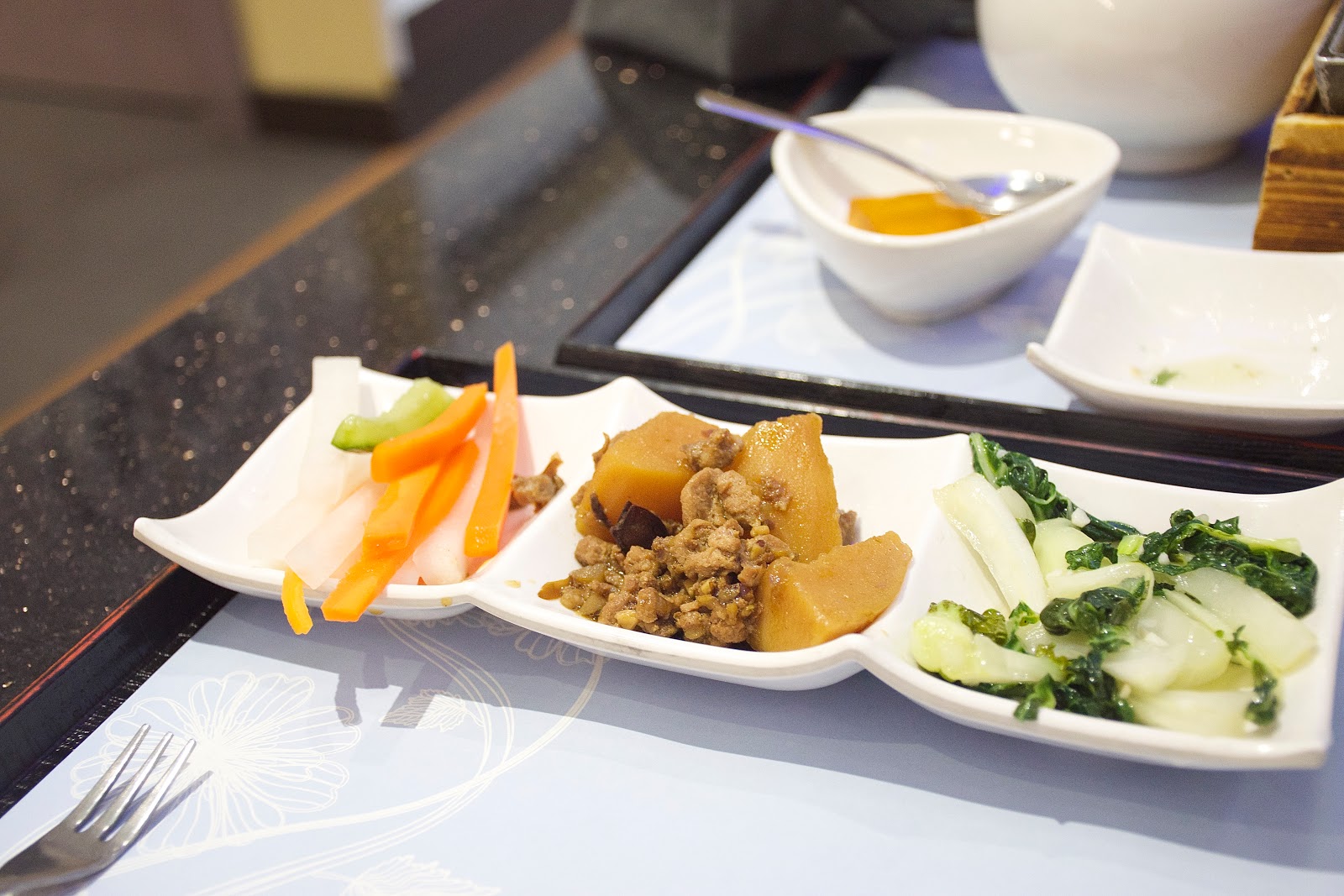 The sides we had on that day! The potatoes with minced meat was really good!! :D 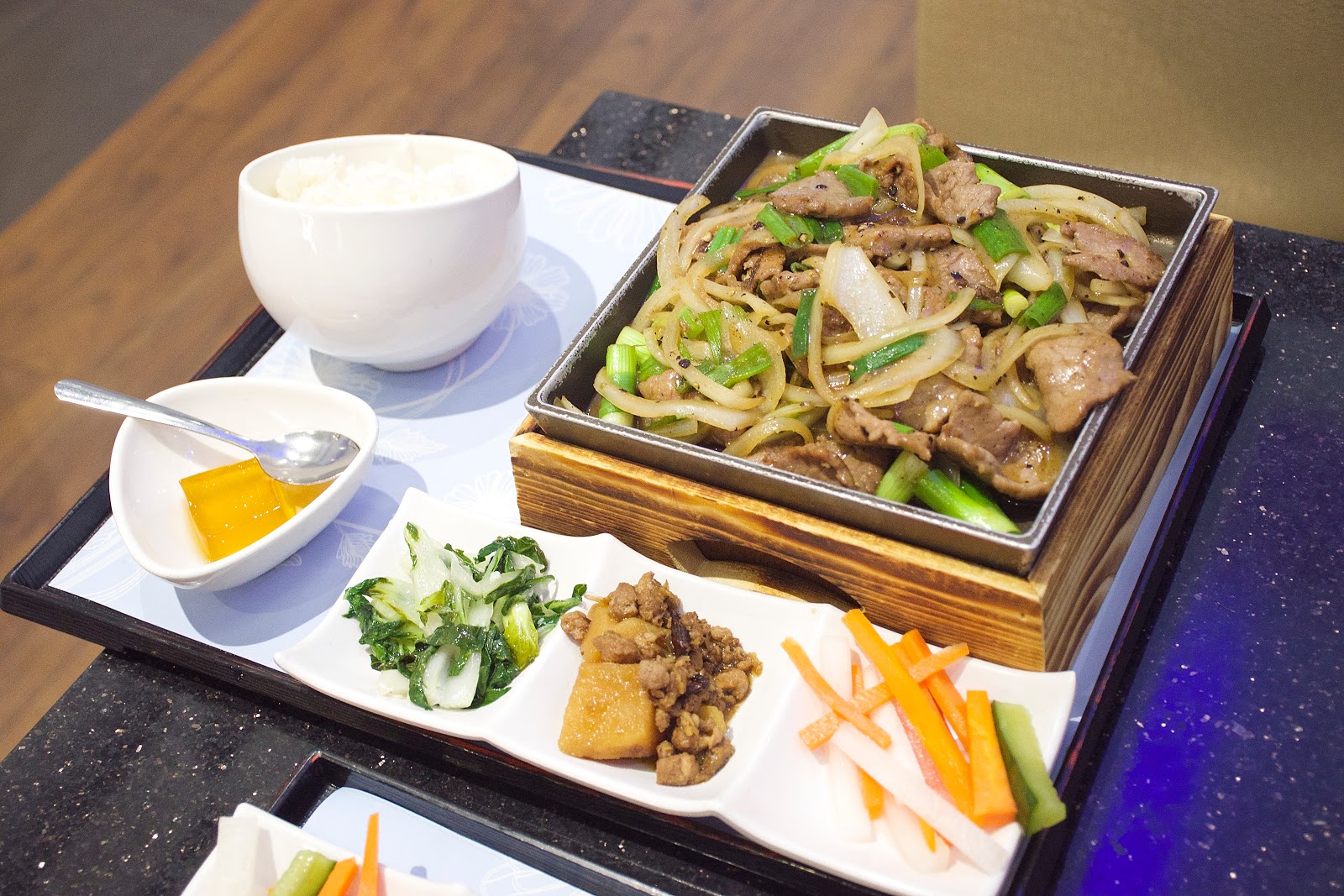 Black Pepper Beef
3/5 stars
My dad had the black pepper beef on another occasion! The beef in the beef/chive version was definitely more tender. This wasn't bad though. It was coated with a generous amount of black pepper sauce, so it had a lot of flavour! 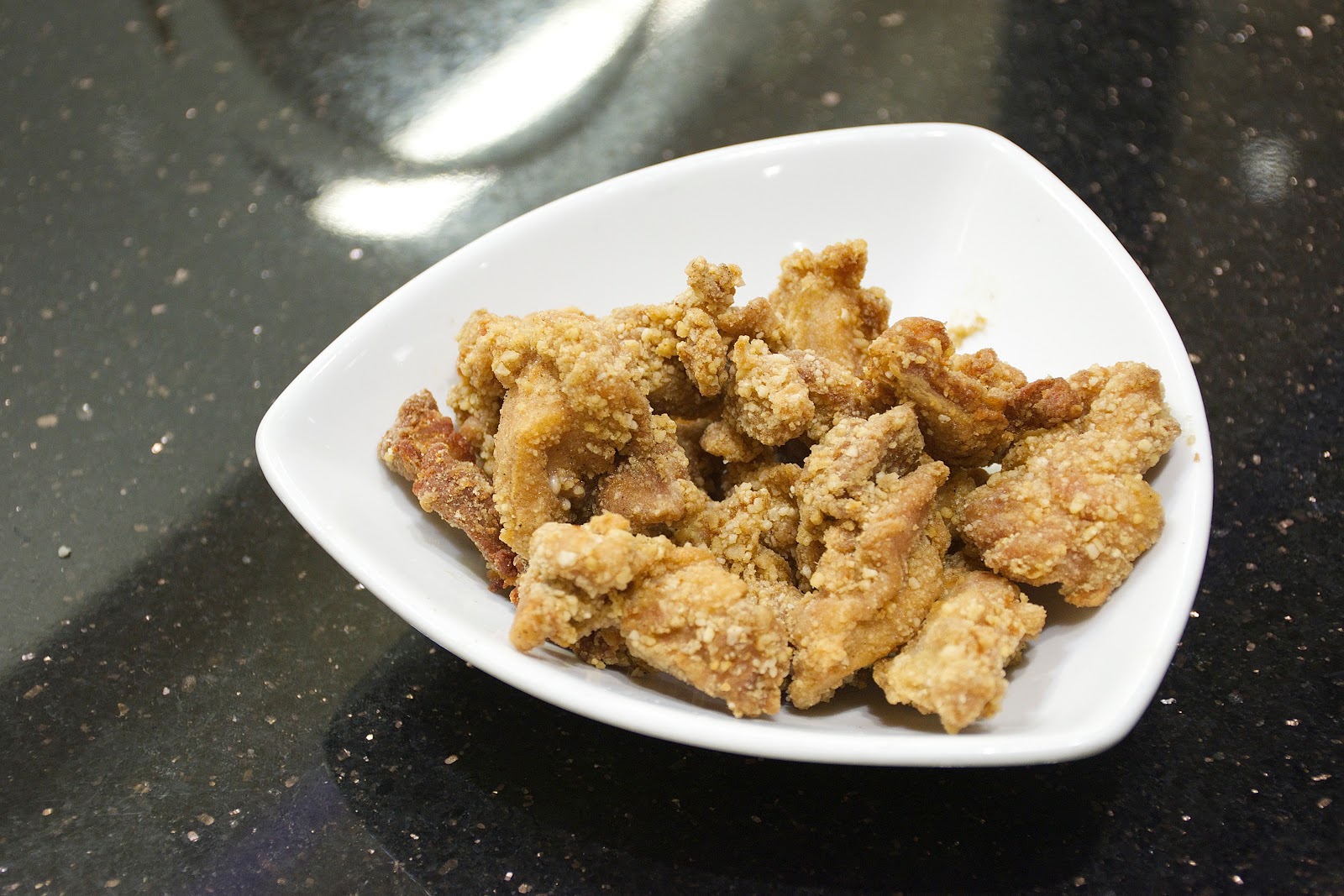 Salty Peppery Chicken
4/5 stars
There was actually a promo going on that day: If you spend $20 you get a bowl of salty peppery chicken for free!! :D How awesome is that?? hehe!!

Pearl Castle's version is solid. There are better ones out there, but this one is always on point. The batter was always crispy without being too oily, and there's always enough seasoning!! 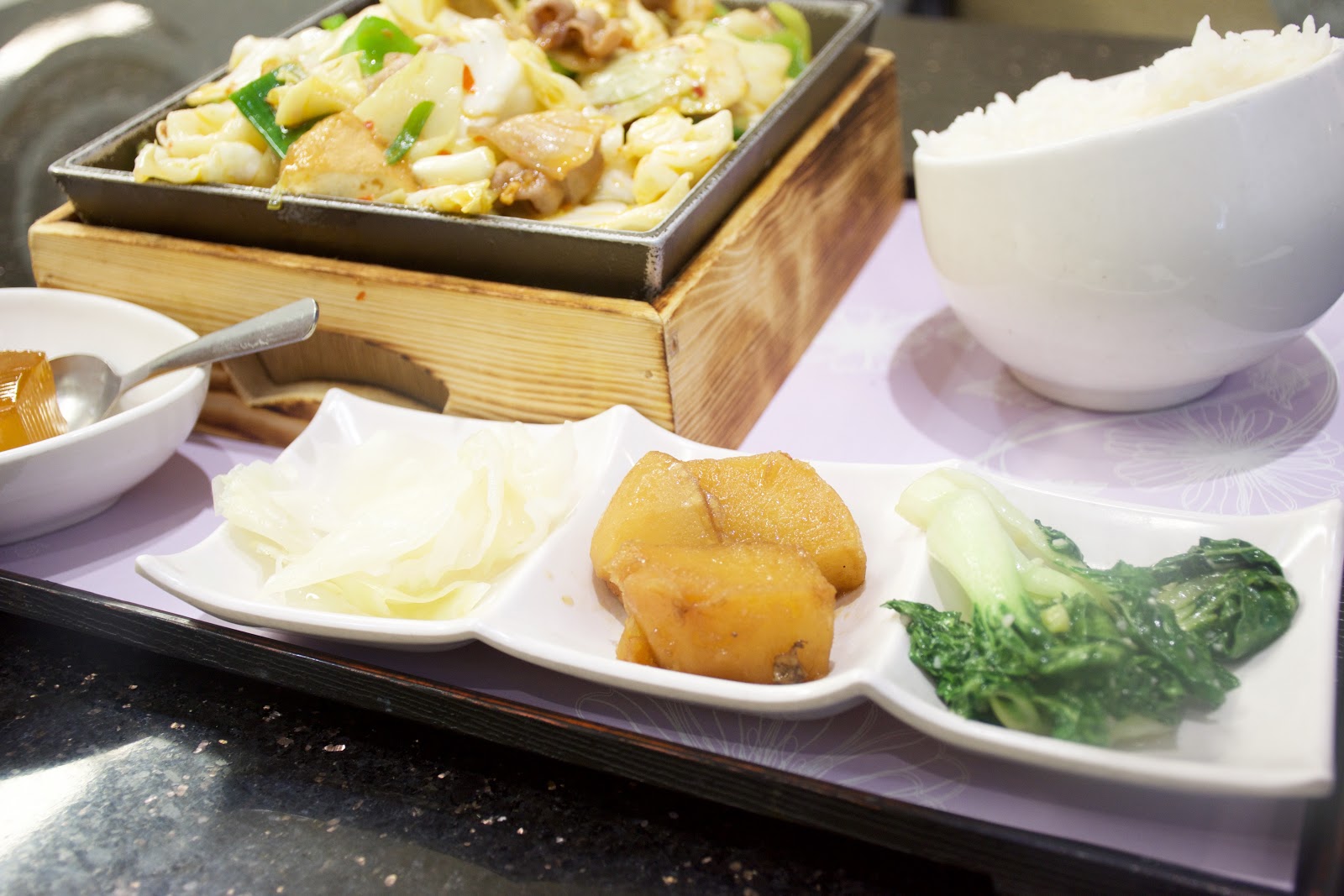 Sliced Pork w/ Tofu (The dish in the background)
For some reason I can't find the picture that I took of this dish ANYWHERE!! I'm so sure I took a picture of the dish though haha!!

3/5 stars
The flavour was pretty good, but the dish composed mainly of fillers like cabbage. The pork was also sliced really thin - almost too thin, and there wasn't alot of it. Usually Pearl Castle doesn't skimp out on the meat but we were a bit disappointed with this one.


These photos are actually from last year haha, and I totally forgot to blog about them! So I thought I would include them here: 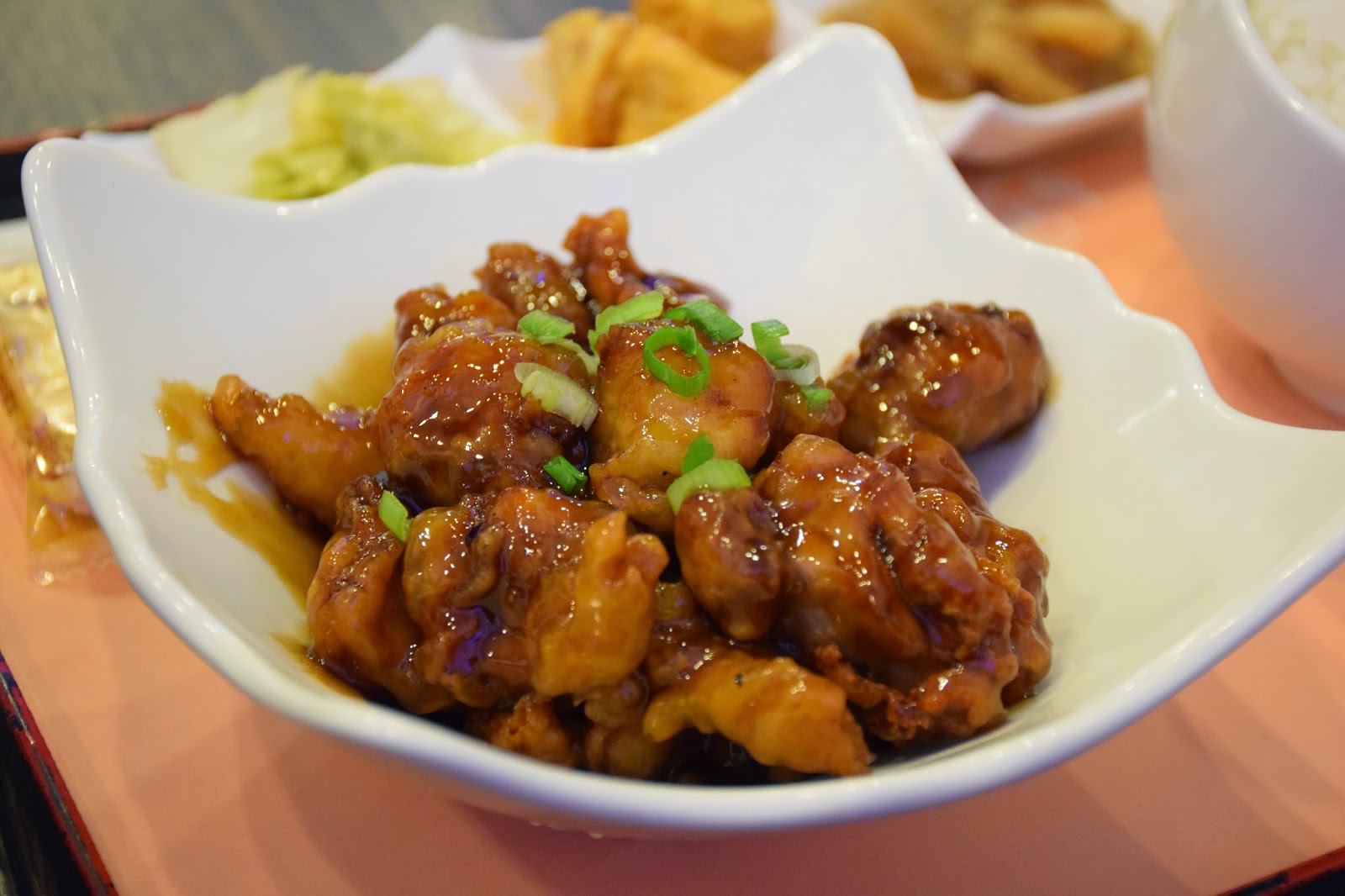 The honey chicken was really yummy! It was glazed with a thick coat of sweet, honey based sauce! The chicken was tender and the skin was nice and soft!! 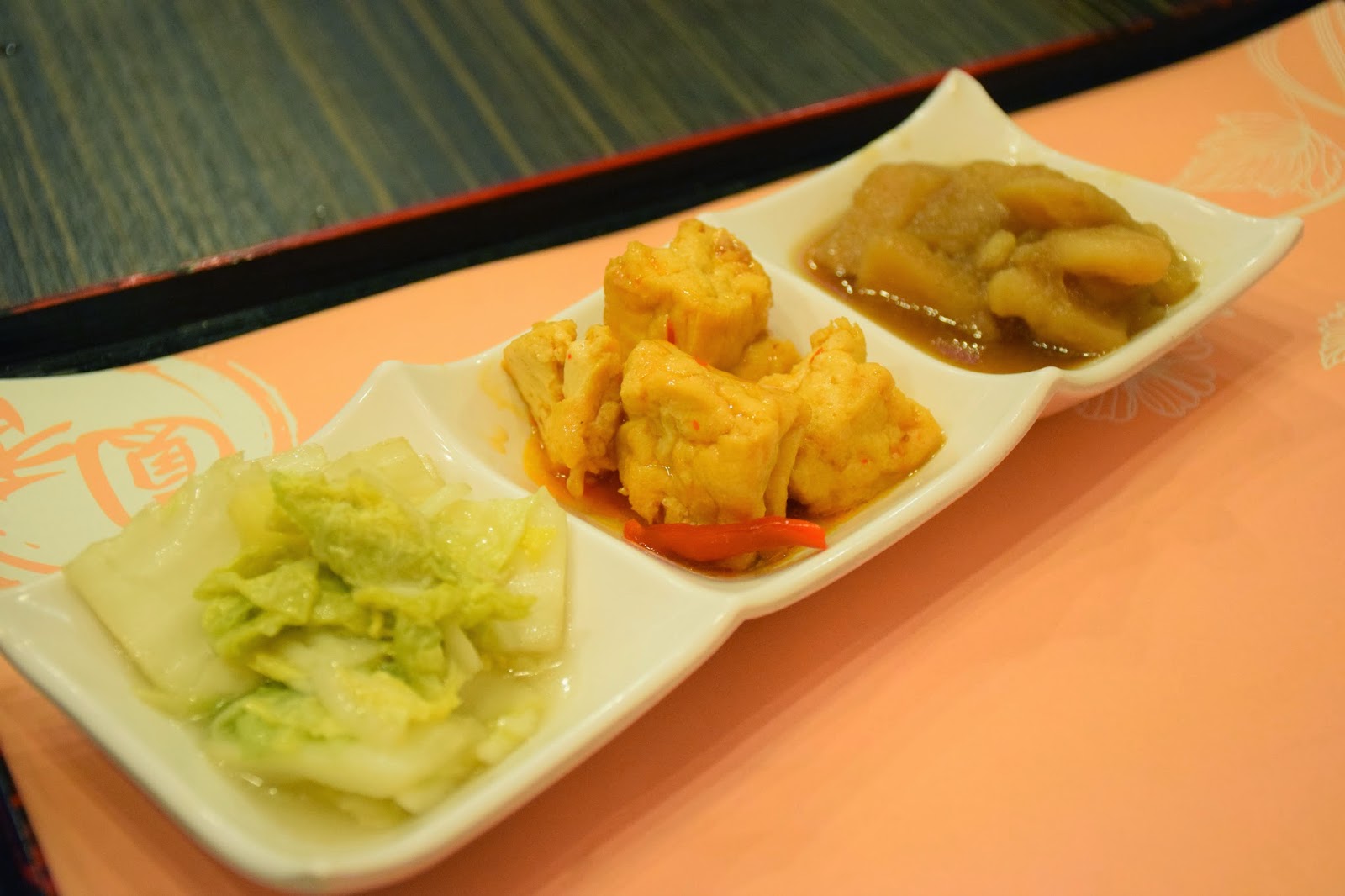 The side dishes from that day! 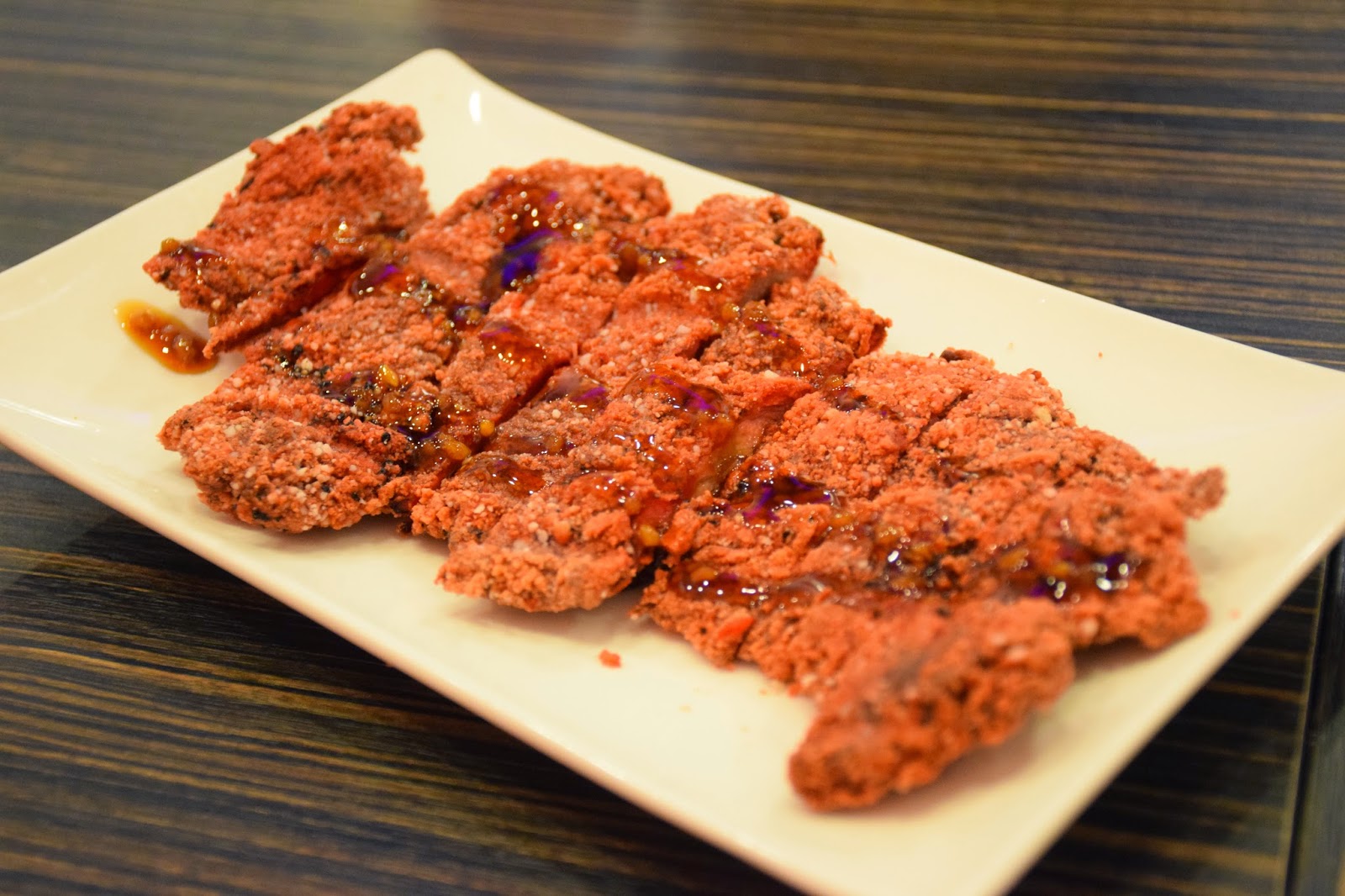 This is one of my favourites at Pearl Castle - I've re ordered it 3 times!! I love that distinct fermented flavour!! The outside is super crispy and coated in a sweet sauce that pairs really well with the meat!! 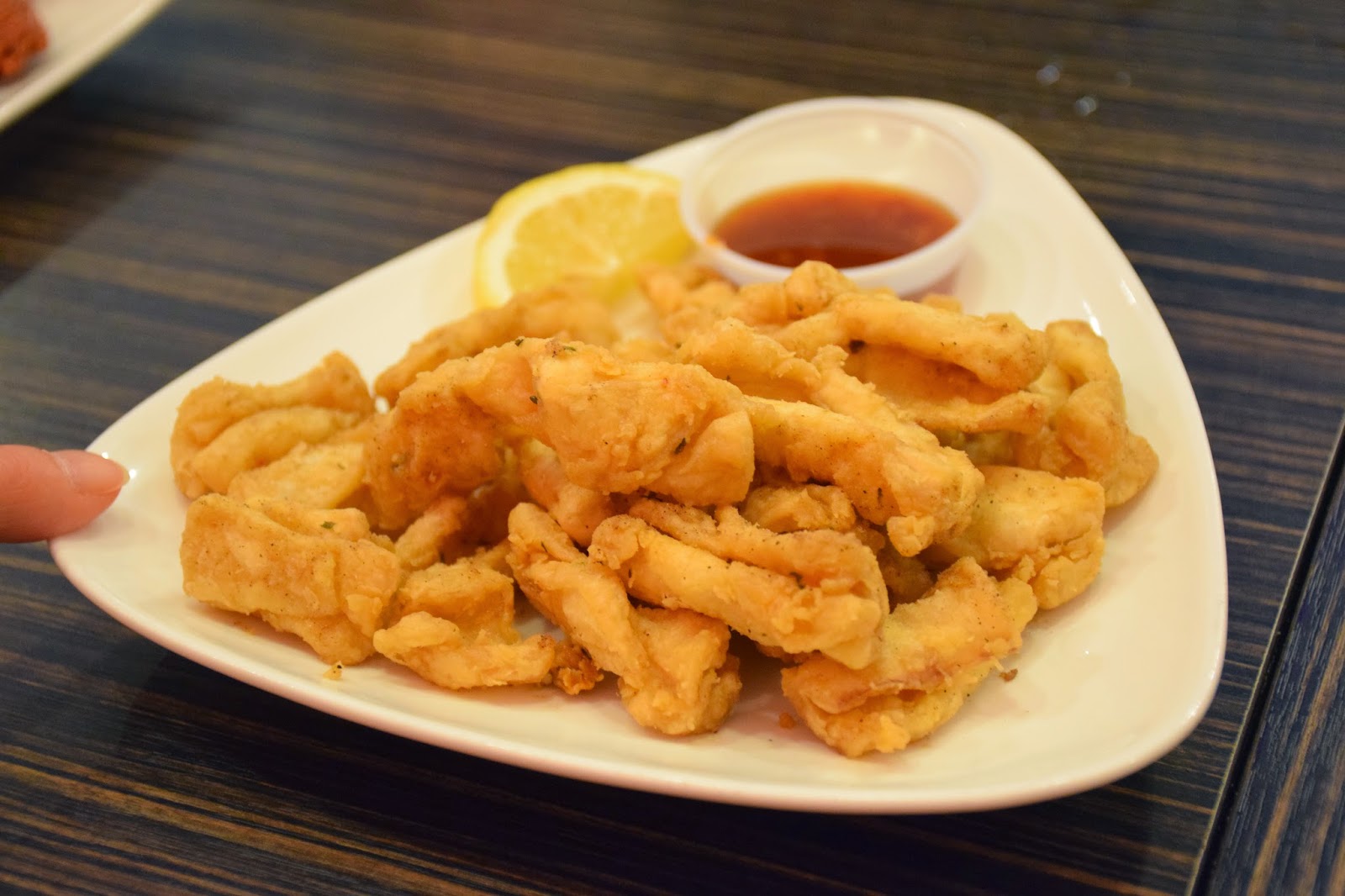 3/5 stars
This was okay. The patty wasn't airy enough for my liking and it was almost laid on too lightly, so it wasn't crispy as a result!! The seasoning was yummy though!! :D 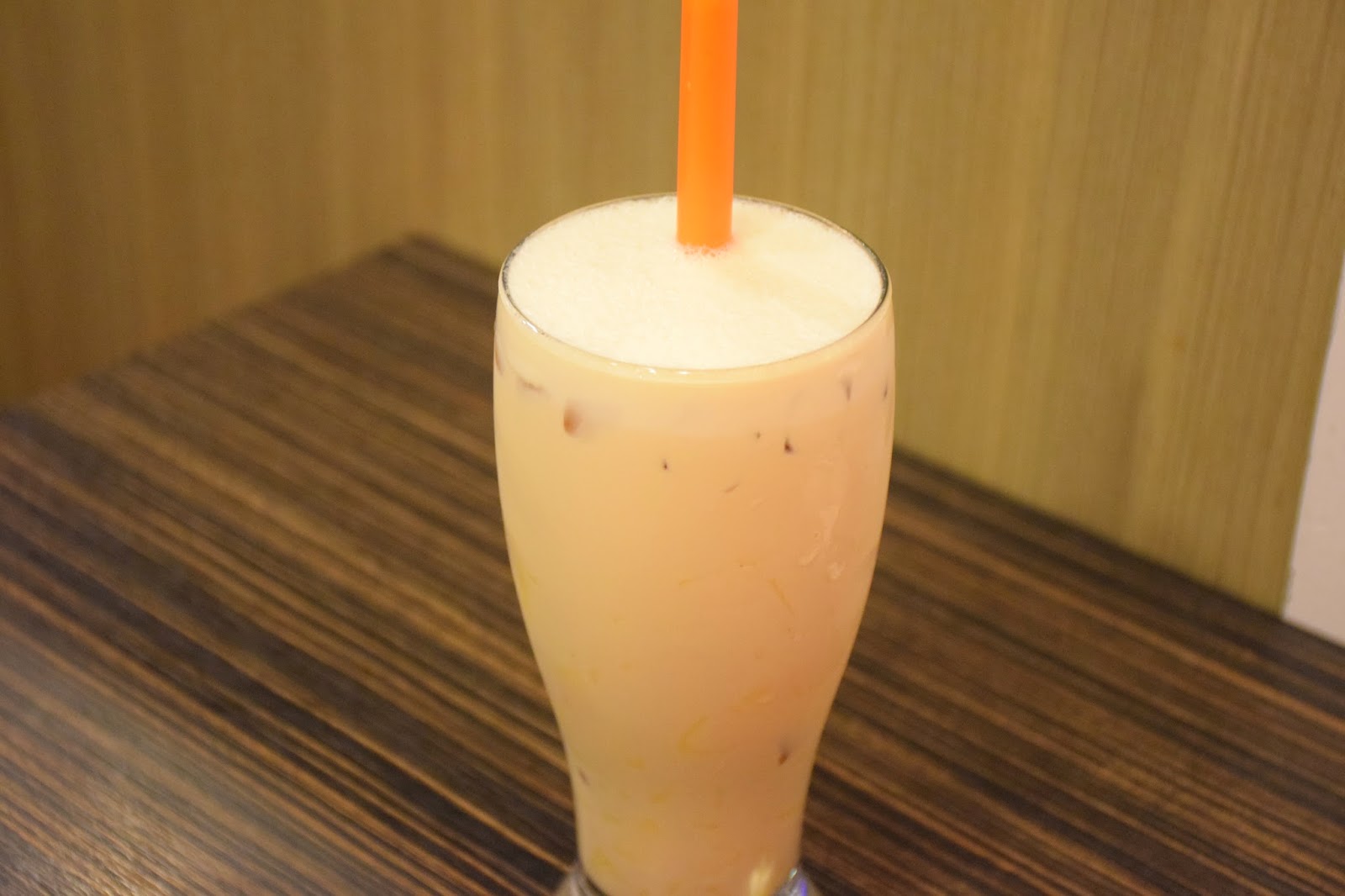 Mmm loved this!! I love their bubble tea, I don't know why I don't drink it more often!! Their bubble tea is always super milky and smooth, and just the right sweetness!! 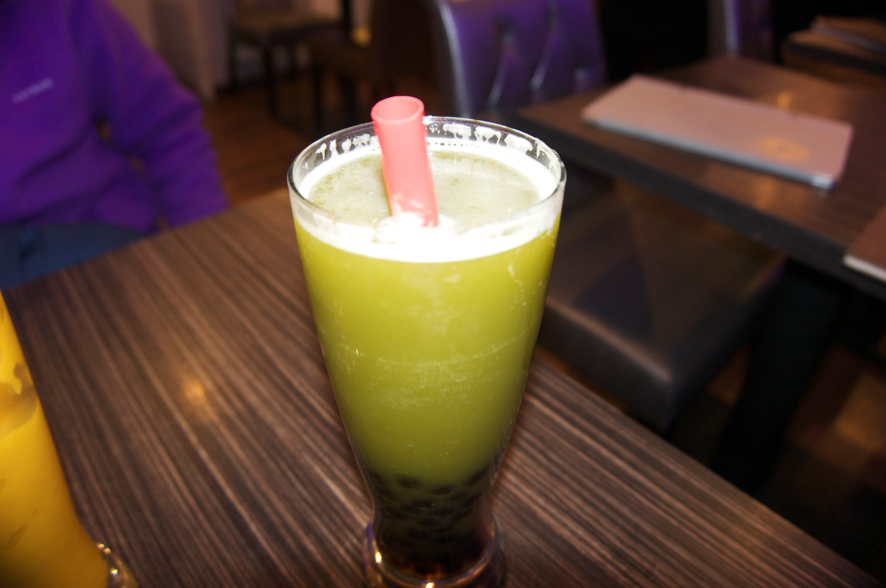 This was also really yummy!! Pearl Castle has their drink game down!! The flavours were really strong, and I could taste each distinct flavour!! It wasn't that sweet either, which was really nice! The pearls were perfectly cooked too! 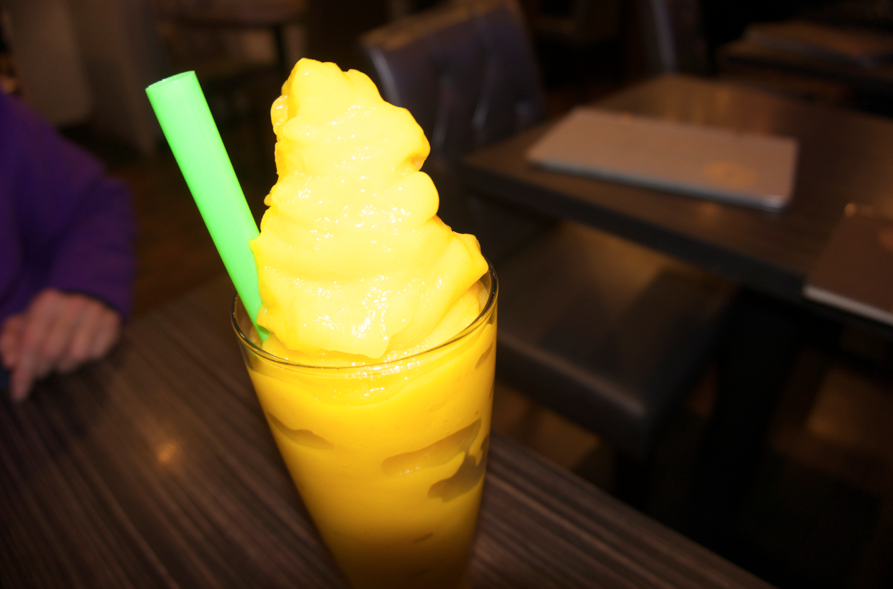 Mango Slush
3/5 stars
This wasn't bad - but it was made with artificial mango powder! But looking past that, it was quite good! Creamy, milky, with a strong mango (artificial) mango flavour!