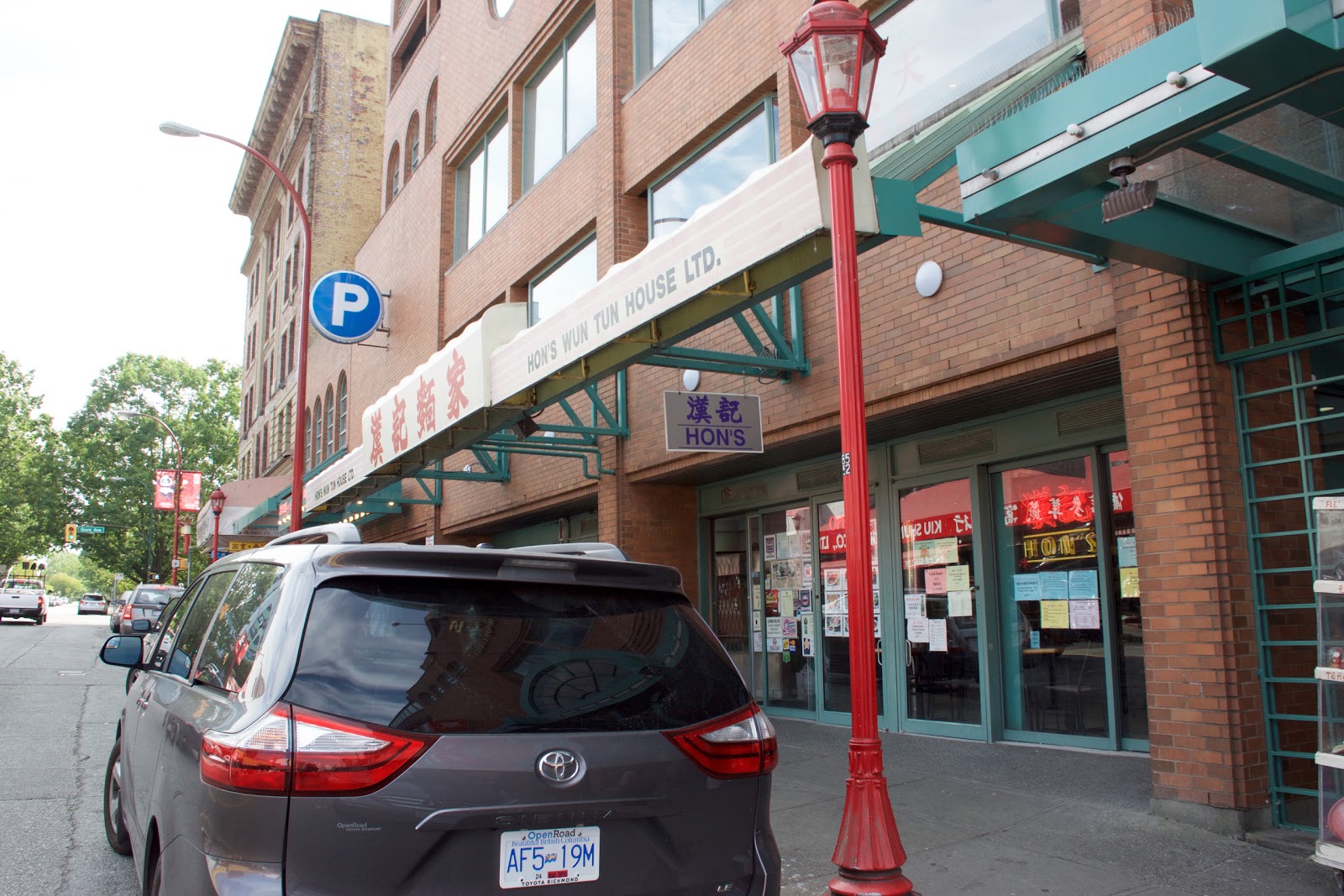 Ah Hon's. If you're a Vancouver kid, I'm sure you have fond memories of eating at Hon's (and Uncle Willy's!)

My dad use to go to Hon's a lot (I'm sure this doesn't come as a surprise.) If he was in Chinatown, it was either Kent's or Hon's. Or the asian food court beside HSBC. He was a regular at Hon's in Chinatown and Coquitlam (we use to live there)

I went to Hon's alot when I was kid...but I bet you wouldn't be able to guess what I would order! (I'll give you a moment to think.) Their famous potstickers? Nope. Their wun tun mien? Nope. Nothing! I would pack my own lunch to Hon's!

Back then I had severe allergies and I was even allergic to soy sauce (thank god those days are over) so I would watch in awe as my parents devoured their cheong fun and wun tun mien. I would get scolded at by the ladies who worked there (no outside food allowed!) and my parents would have to come to my defence and I explain that I had allergies!

So yesterday was actually my first time eating at Hon's! After watching people eat at Hon's for 10 years of my life, I can finally say that I've eaten at Hon's!! It was a glorious moment indeed. It's the little things guys, the little things!

My dad actually lived in Chinatown for 10 + years when he first moved to Canada! Nowadays he doesn't come to Chinatown that often because he works in Richmond, but when he does, it's always a trip down memory lane! I would joke with him that this was where he "grew up." He knows Chinatown like the back of his hand!

We actually didn't order their famous potstickers because my dad eats them all the time at home (they sell packs of them in Chinaworld!) Last week I found out that their potstickers actually contain peanut oil and eggs (just a heads up for anyone's who's allergic!)

My dad kept wanting to order off of the specials on the wall because he thought it was better value! We got a few items to share, yua ja gwai (of course!) a bowl of congee, a beef brisket & cheong fun dish, and some sui yuk (because I wanted to try some of their BBQ meats!)

I really have to commend them on their service. Service was shockingly great. The lady who served us was so nice!! She answered all of our questions about the specials without being impatient, and she was super polite! The waiter who was serving the table beside us was also really polite and humble, he even thanked his customers...twice! The food's not that great, but I would come back for the service alone, and for nostalgia's sake :D

After lunch I wanted something sweet so I went to the Cantonese bakery across the street from Hon's! There's two, Maxim's and Sun Fresh Bakery! I bought some classic Cantonese sweets for dessert (bak tong gao & dousha bing!) I ate them in the car and my dad was like "You're still hungry...after all of that?!" 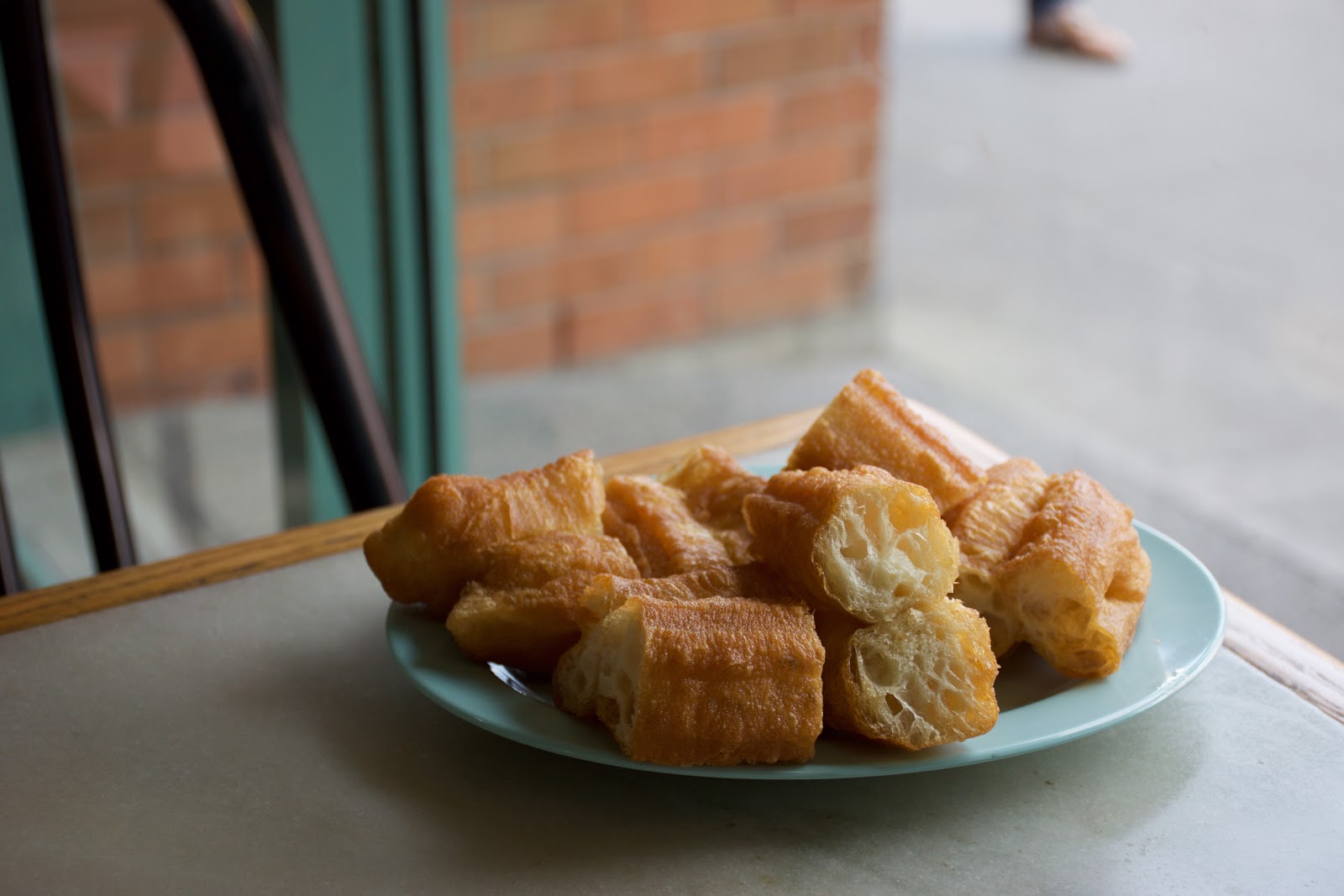 Wow, I've been eating an awful lot of yua ja gwai lately!! I'm suspecting that my new pimple might have something to do with it! ;)

Pimples aside, you can't go to a Cantonese place without ordering some yua ja gwai can you? These were just alright. They're the doughier kind, which I like, but the exterior wasn't crispy enough for my liking. I don't think they season them because they were pretty bland. Some places do, some places don't, because most people end up dipping them in congee. But I prefer saltier yua ja gwais because I like eating them without congee! 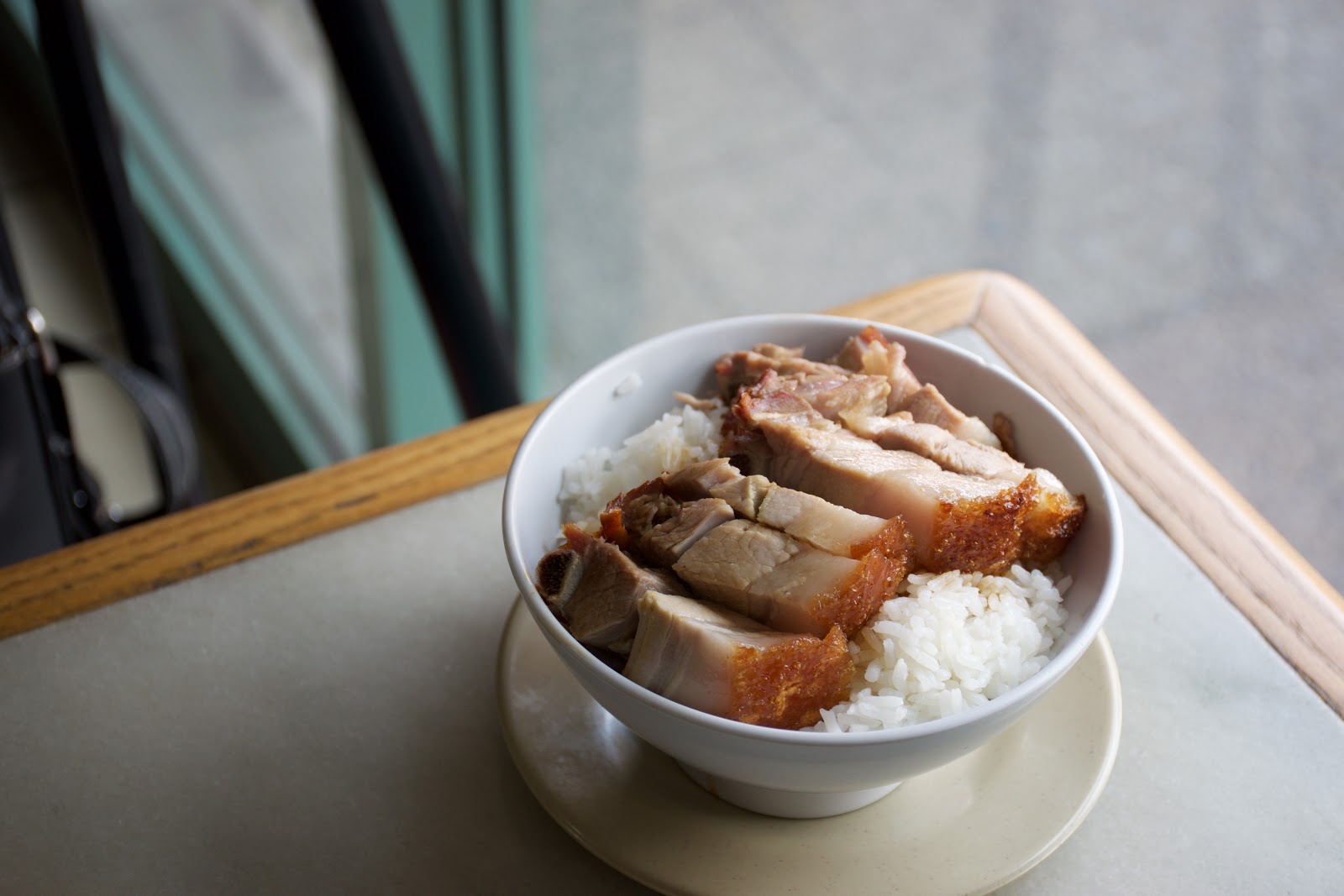 This was below average, by Richmond standards. The sui yuk, while reasonably fragrant, wasn't that great. The lean meat was very tough, and the fatty pieces were too fatty (and not in a good way.) The crispy skin was a tad bit soggy and too thin. The rice bowl was a bit small for almost $7 and the rice they use isn't that great. But given that they're not a BBQ house, it's forgivable! 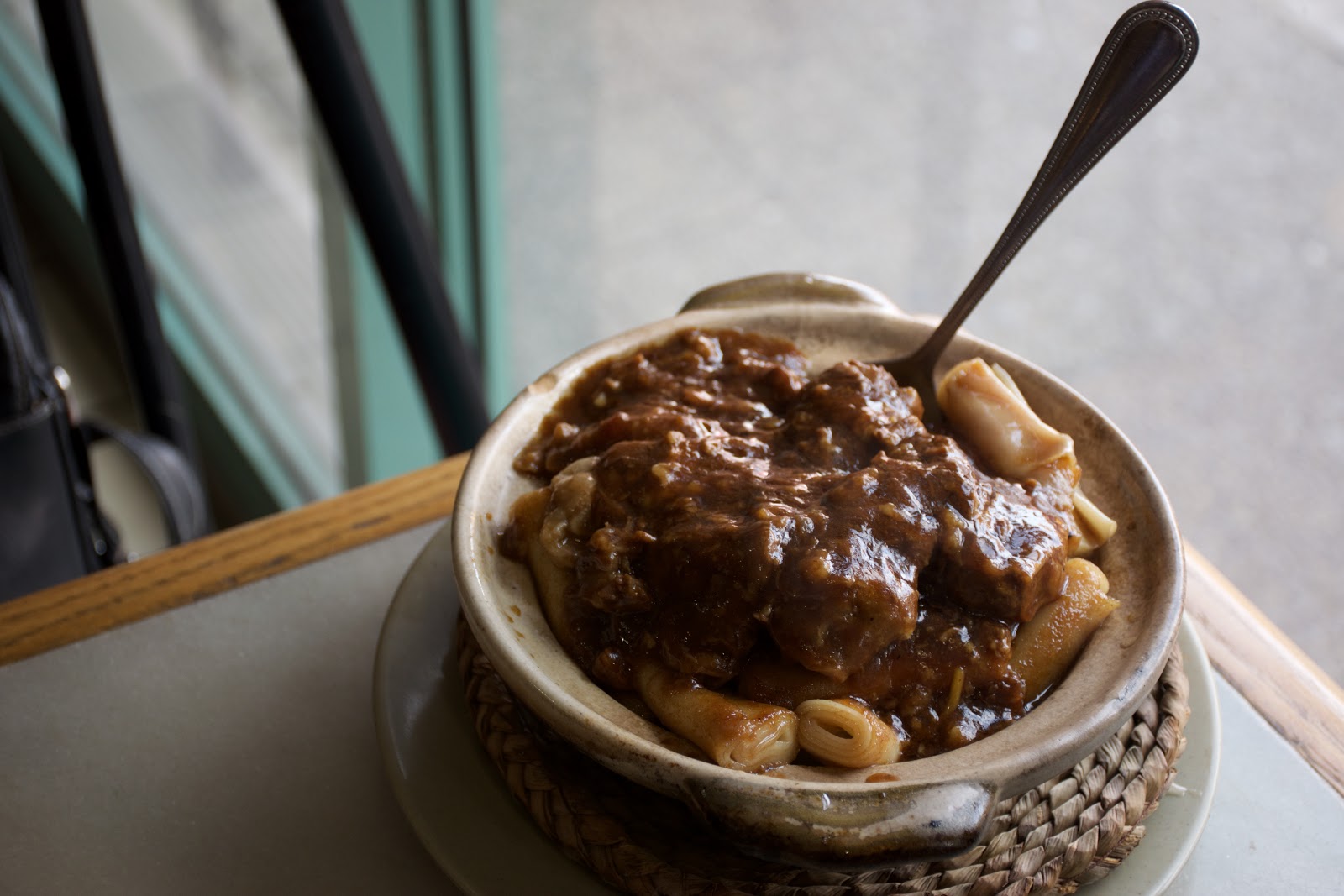 This was the best dish of our meal!! I was actually quite impressed with it. For under $8, this came in a large bowl, piled high with loads of brisket and rice rolls! The rice rolls were chewy with bite! The rice rolls were pan fried so they also exhibited a reasonable amount of wok hey! The brisket was well seasoned without being too salty, and the meat was reasonably tender, and didn't require a lot of chewing! There was also some bak choy on the bottom, which was a pleasant surprise! While I was working on my sui yuk my dad devoured 3/4 of it! 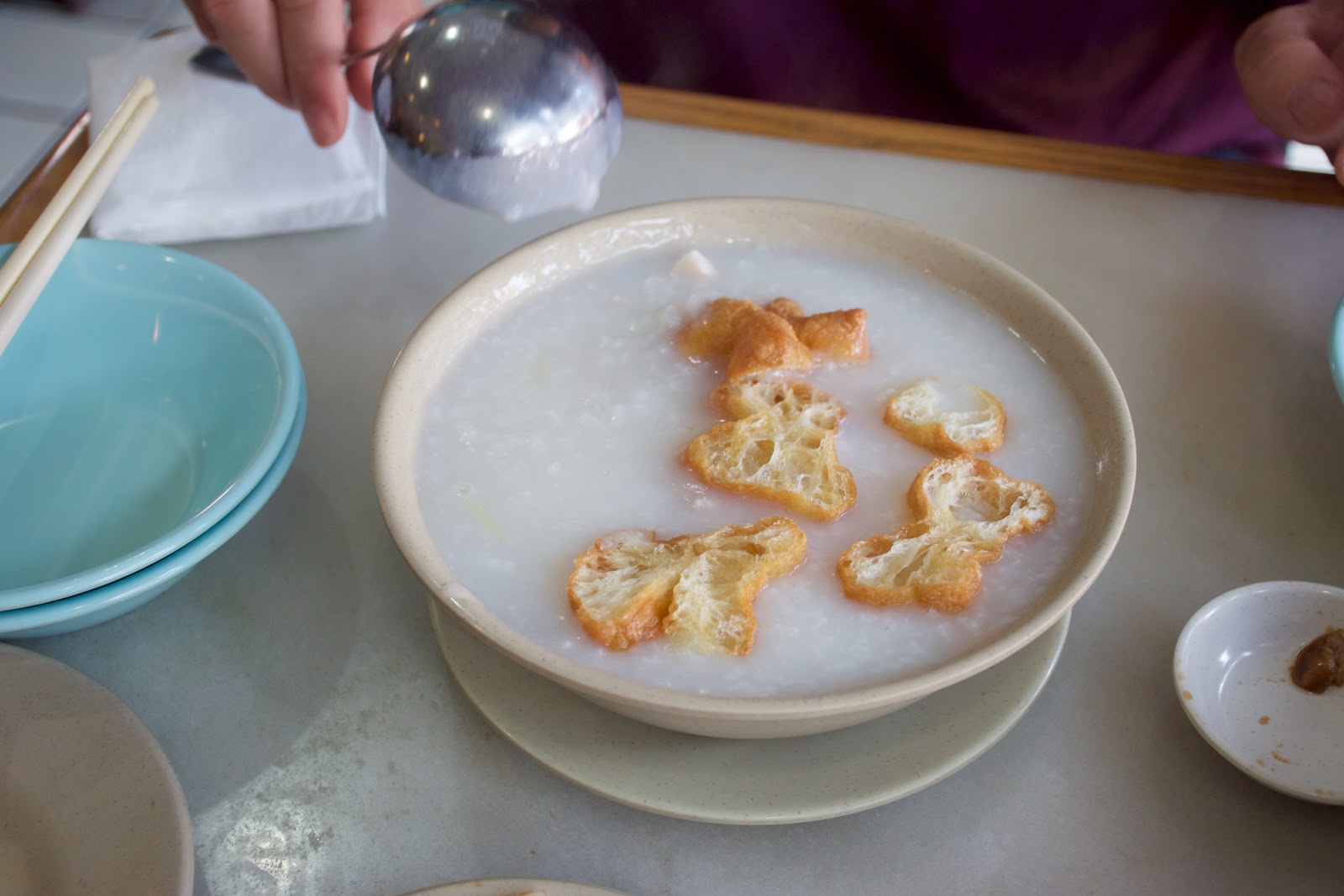 (This came with extra pieces of yua ja gwai!)

For $5, the congee came in a huge bowl loaded with pork and pieces of yua ja gwai. I was actually quite impressed that they included 6 pieces of YJG in there because most congee places don't! The pork was a really neat texture, it was chewy and the pieces "popped" in my mouth! The congee tasted predominately of ginger, and msg usage was definitely at a minimum. Consistency wise it was okay, a little too runny for my liking, I prefer thicker congees! 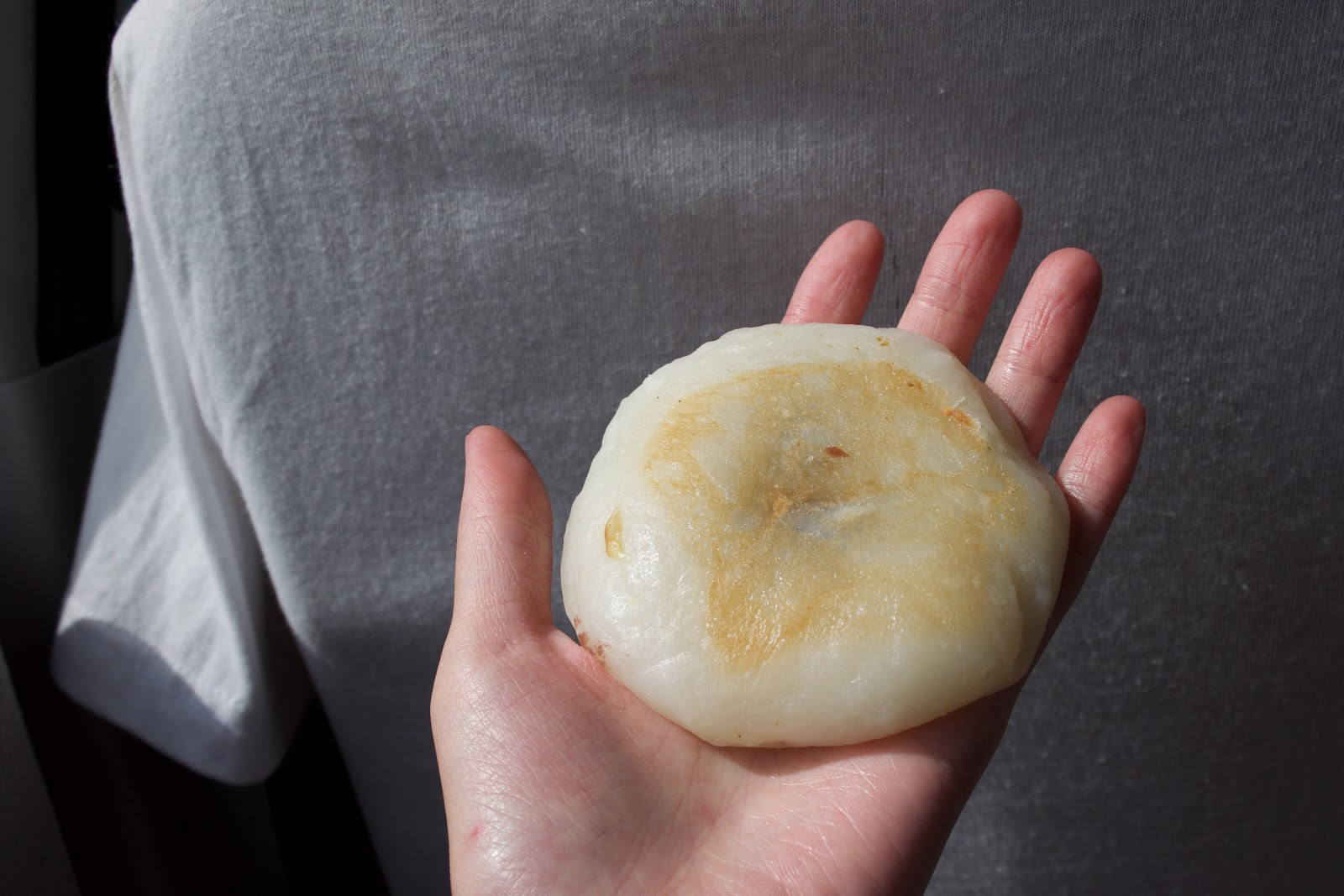 Literally my childhood. I kid you not. I practically ate this & bak tong gao every other day when I was a kid! Not a lot of people know about these old school Cantonese desserts because they tend to get overshadowed by mainstream bolo baos and dan tats!

I actually haven't had a piece of dou sha bing in years. I guess after I became a food blogger I got preoccupied with eating more "exciting" things so I forgot about these. But man, are these ever good! You can never go wrong with the classics!!

It's super glutinous, sticky and mochi like!! It's subtly sweet and has an amazing aroma to it! When you bite into it the red bean flavour hits you in the face! It's wonderful. Such a classic, I'll never get tired of it! 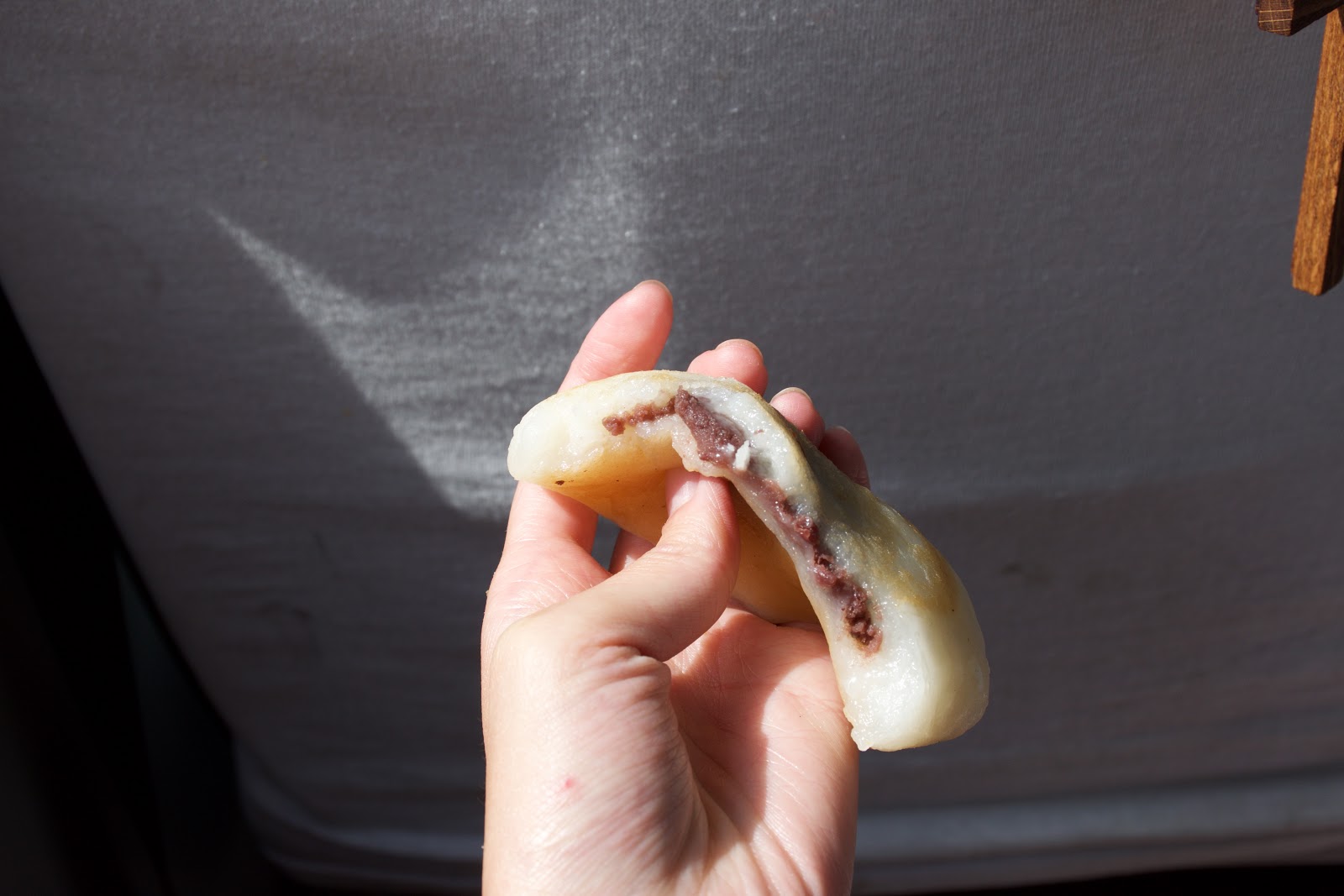 It's been too long BTG!! Me and BTG go wayy back. Back then, it was the closet I would get to eating a "cake."

It's almost like eating a sponge, it's very spongy in texture, and it has holes in the centre!! It's subtly sweet, but it has this amazing aroma to it, it smells like a mixture of rice and sugar!! I was surprised that it was still warm when I opened it, because they're premade and stored inside glass display cases! 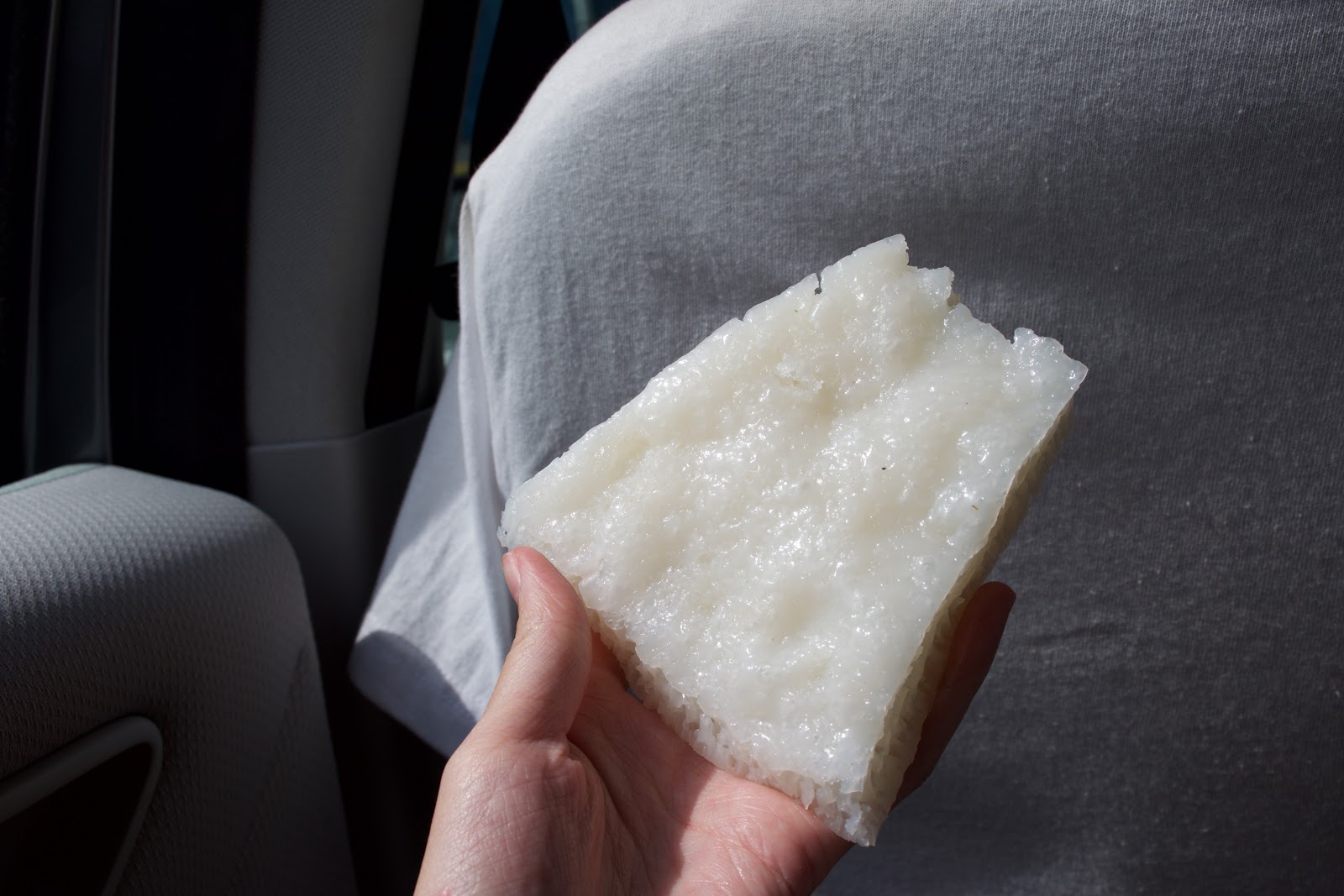 Just look at those holes! :D