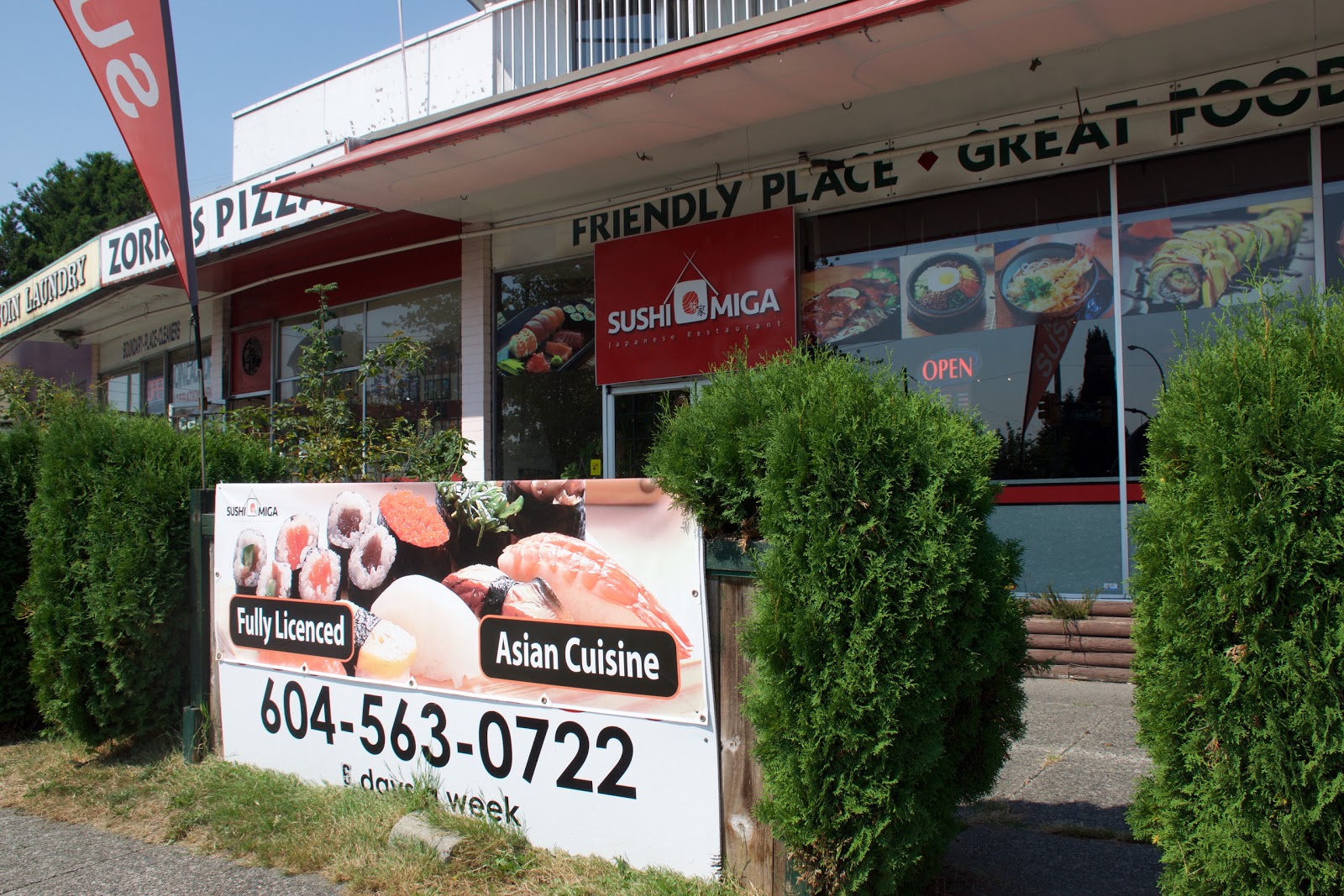 I have some sad news to share with you all. But first I want to apologize for the fact that I haven't posted in a few days!! Please don't take this post the wrong way (I'm not trying to make excuses or have you guys pity me.) I just feel like you guys deserve to know why I've been MIA lately, because you guys have been such a big part of my life!! <3

You guys may know that I've been suffering from tastebud lost (it's been over a month now.) At first I thought it was from the toothpaste, and for the first few week, the toothpaste was what caused my tastebud lost. After a series of doctor visits and tests, we've discovered that I've actually developed an allergy to egg and processed soy products. On top of that, my dairy allergy has worsened, and I've also been diagnosed with OAS (Oral Allergy Syndrome) - which basically means that I'm allergic to raw foods that contain pollen - vegetables, fruit, honey, etc. So yes, I'll never be able to bit into a piece of fresh fruit again :(

The reason why my tongue was swollen/white/ for so long was caused by a combination of factors: an allergic reaction to crest toothpaste, which happened to coincide with my sudden egg/soy allergy. Strangely enough I can still eat soy sauce, but I'm allergic to all other forms of soy (in particular processed/altered forms of soy.) It sucks because almost everything contains soy nowadays.

I was allergic to eggs for 13 years of my life but my egg allergy went away in highschool - but it's returned. Which means that I'll have to say goodbye to overeasy eggs, mayo, brunch, and desserts. It's so hard to say goodbye *sniff*

Food blogging is definitely going to be more challenging for me now. Living with allergies is definitely not fun. Especially when what you're allergic to is in virtually everything. I'm devastated that I'll probably never get to eat a "proper" dessert again. Now I'm even allergic to vegan desserts (because they usually contain soy or almond milk)


So here's a basic breakdown of what I'm allergic to:


My health has been really suffering as a result. Not being able to eat fresh fruit and veggies really takes a toll on your health. I've been dealing with anemia, amenorrhea, shivers, and chronic fatigue for a while now. So I apologize if my posts are sporadic, because I want to take some time to focus on my health. But I'm still going to try to post as often as possible, because I just love blogging so much...I'll never give it up!! And thank you again for YOUR unconditional support, every comment, every like, every view, makes my day!! You guys are seriously the best. So thankyou <3

Now that I've completely eliminated dairy and soy from my diet my tongue has slowly started to heal, so my tastebuds (according to my doc) should be back to normal in no time!! :D


Sorry for the long intro - let's get on to the food now, shall we?

In other exciting news - we recently made an offer on a house - and we got it!! So in preparation, the past few days I've been running errands with my parents to the bank, attorney's office, and such (which is always fun!) So yesterday we went to our lawyer's office, which just happened to be located beside Sushi Miga, a korean run Japanese restaurant on Boundary!! So that's where we ate lunch. The sushi wasn't that great, but my parents were pretty impressed by the tonkatsu! The interior was quite nice too! 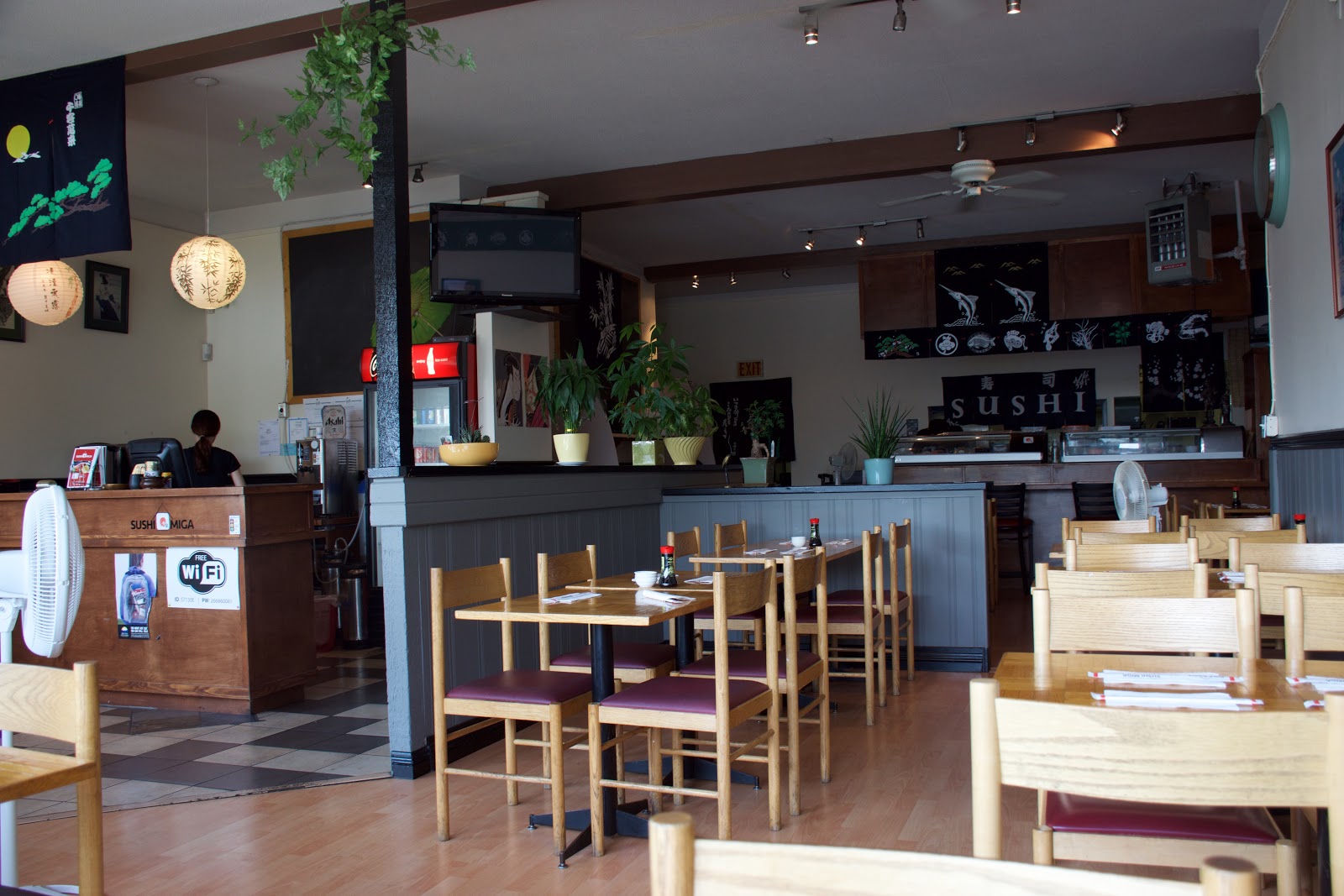 The interior is super clean and well lit! :D 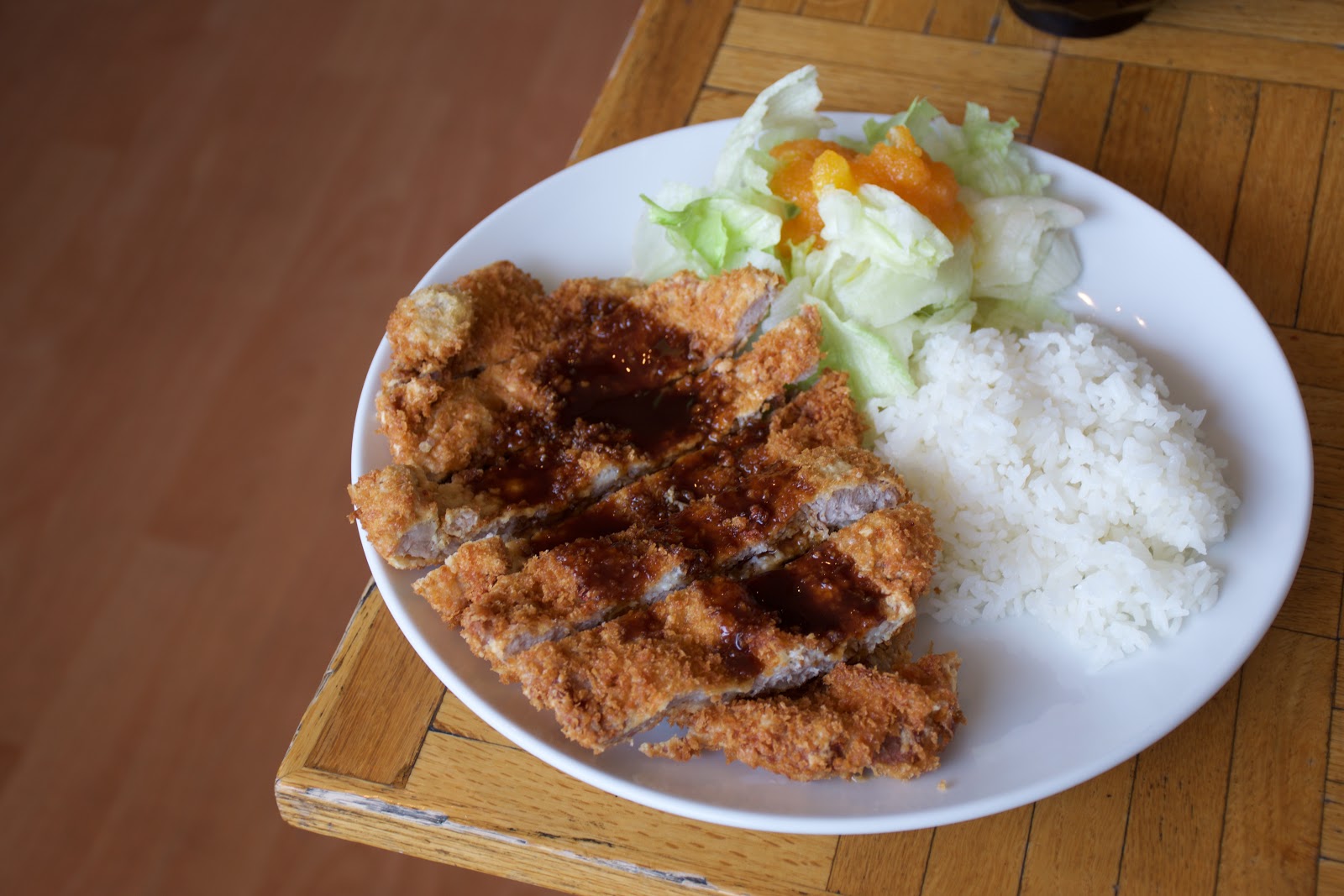 
This tonkatsu is under the korean section of their menu. They also have another tonkatsu under the Japanese section for $12.95.

This was a HUGE tonkatsu! My dad had originally ordered the sushi lunch box, but after seeing my mom's huge tonkatsu, he wanted to switch. The tonkatsu ending up being way too much food for him so he ended up sharing with my mom!

Not only did it look good, it tasted great too!! It was adequately crispy on the outside and lightly breaded!! The pork wasn't dry or greasy at all! It was drizzled with a liberal amount of tonkatsu sauce which gave it a lot of flavour! 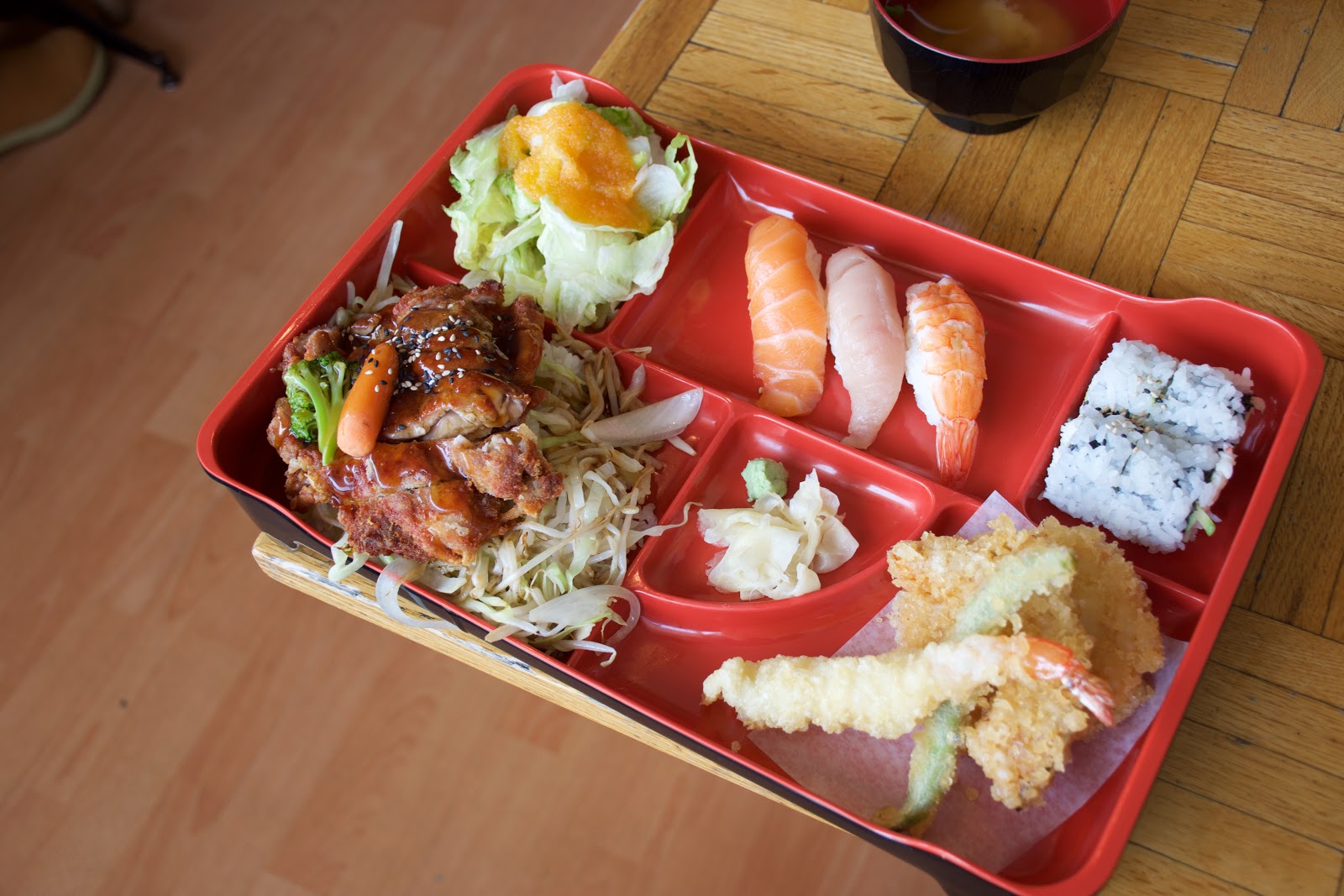 My mom had the sushi lunch box! The sushi lunch box was surprisingly good (with the exception of the nigiri) and generously portioned! The chicken teriyaki sat on top of a huge bed of bean sprouts and rice. The chicken was moist, crispy on the outside and adequately dressed in teriyaki sauce. The cali roll was enjoyable with a proper amount of mayo and rice. The tempura was lightly battered (albeit a bit too greasy.) The nigiri was disappointing though. The rice was too dry and there was too much of it, and the fish just kind of sat awkwardly on top - disconnected to the rice. The salad was quite nice though, it was tangy and fresh tasting! 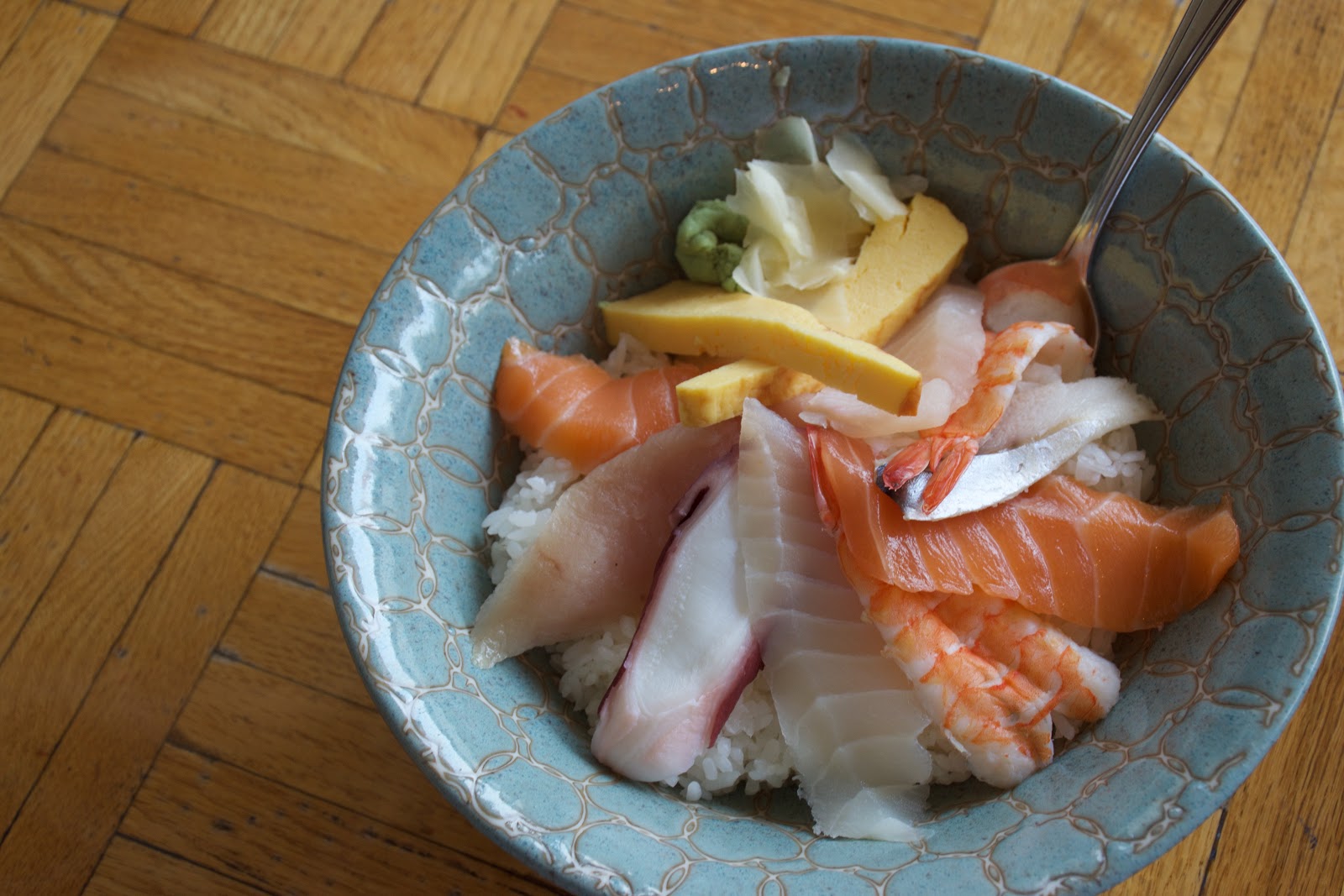 The chirashi don was the letdown of the meal. The rice was not properly made. The rice wasn't very well seasoned, there was barely any rice vinegar in it! My mom confirmed that the rice was pretty bland, it was almost like eating white rice. It was a bit too dry and lacking in overall moisture. The cuts of fish were very thinly sliced and there wasn't much of it.