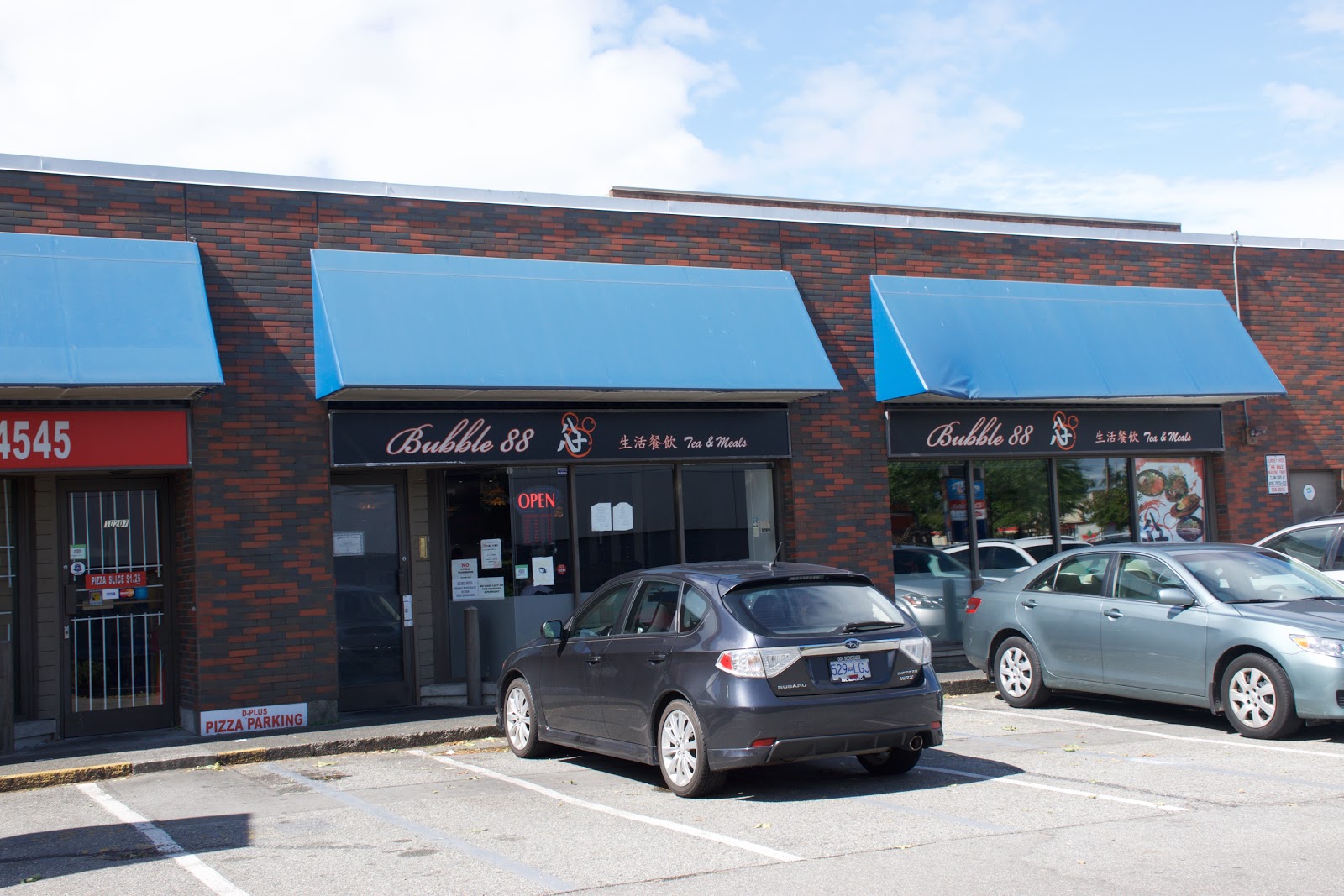 I have a soft spot for Taiwanese cafes. But I have to admit, they don't serve the best Taiwanese food. But I still really like them. For the most part, you know what you're getting, and predictably can be comforting. Especially since I've developed so many allergies, it's nice to know that I'm not risking an allergic reaction by eating something I'm not familiar with.

So recently I've found that I've become allergic to a lot of processed/prepackaged food. Even candy!! Sad because I use to be a hardcore candy sucker...especially during lectures ;)

I love taiwanese sour plum candy so I ate some yesterday and I had an allergic reaction...I ate the same candy two months ago and I didn't have any problems! Weird...

My immune system has basically become that high maintenance brat that everyone loves to hate on. Why?!! On the bright side - at least I don't have to waste anymore money on last minute impulse buys at the grocery store! (And no more empty calories wasted on cookies!!)

These past few weeks we've actually been going to Bubble 88 a lot. My dad likes Bubble 88 because it's cheaper than Pearl Castle, and, they serve free hot tea (unlike PC!) Set meals start at just $7.50!

I like Pearl Castle's food better, but since I've tried *most* of the dishes at PC, Bubble 88 is a nice alternative - especially since their menu is pretty large! The interior is actually pretty nice and really clean. And since we usually eat lunch at 11, we're always the first ones there! The service is pretty friendly but the food does take a while to come out (I don't really mind though!)

Bubble 88 is right across from Surrey Central so it's super popular with SFU students! I have a feeling they're going to get even busier because Kwantlen U is expanding into downtown Surrey!

Tip: If you're a rice bucket like me, you can ask them to switch out the side dishes for an extra bowl of rice! That's what I did! ;) 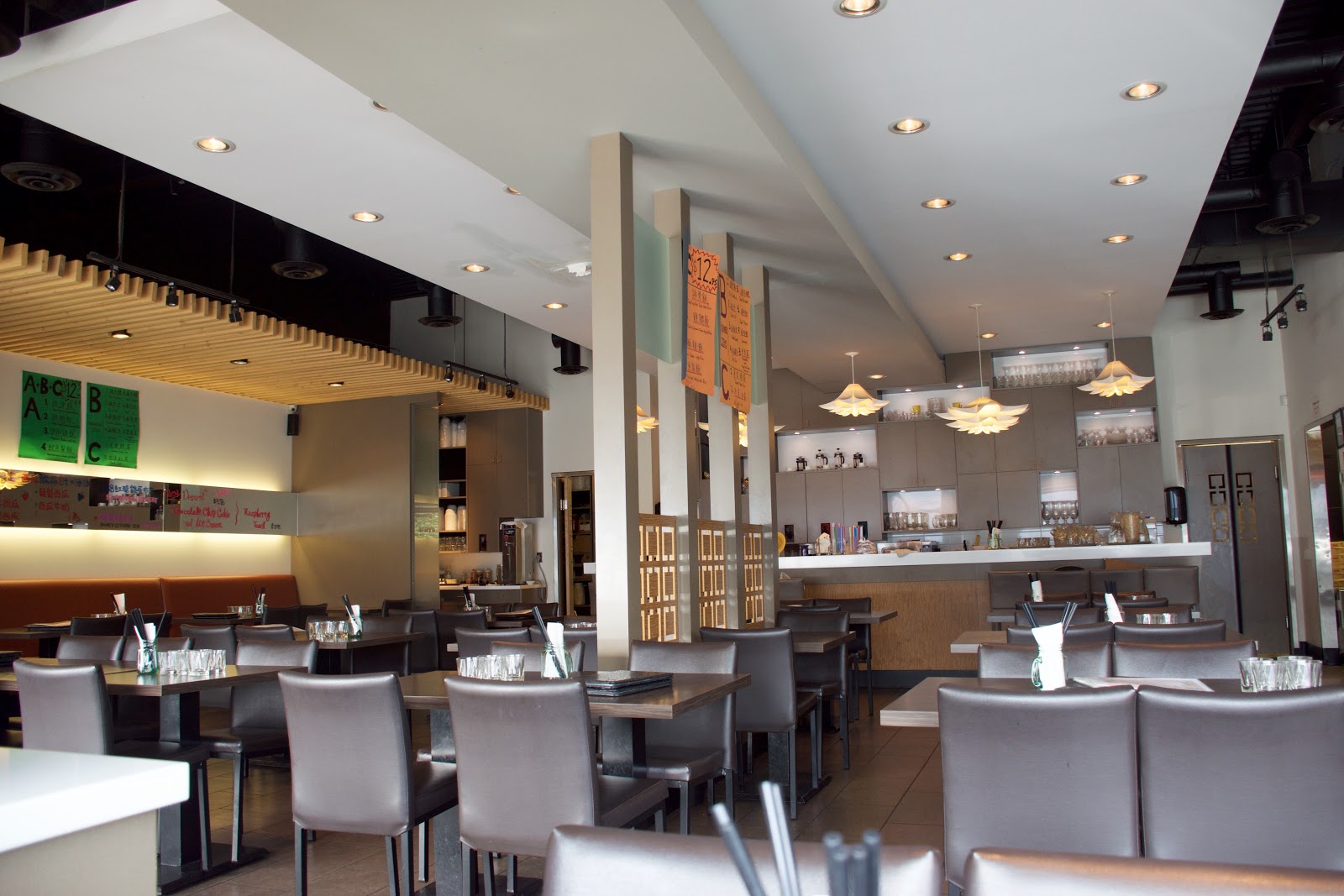 The inside is nice and spacious - perfect for chatting with friends over some bubble tea! :) 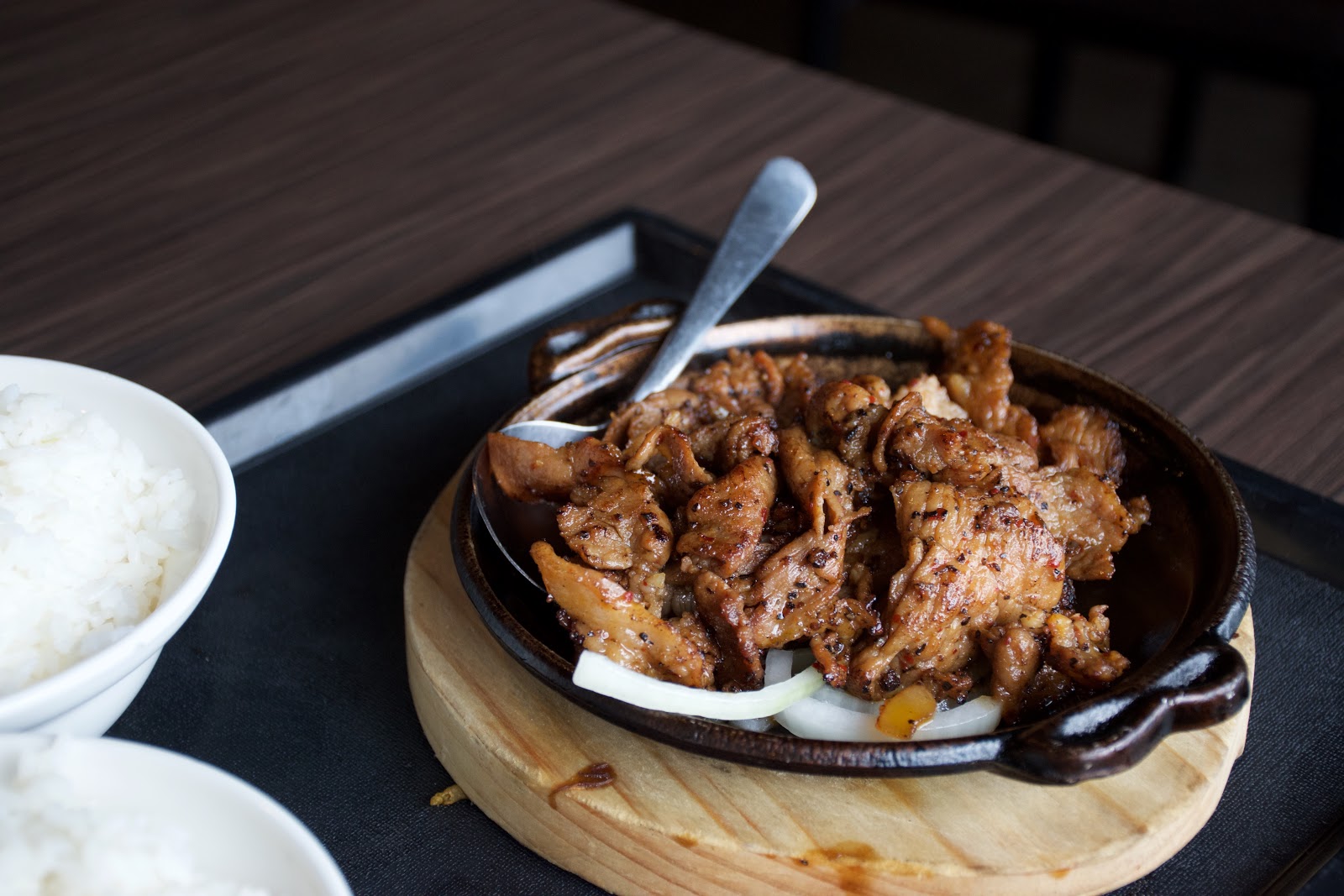 One wouldn't think of ordering "Korean" style bbq pork at a Taiwanese joint!! But this was actually pretty good!! I was expecting a bulgogi sauce of some sort, and it did taste a bit sweet! It was also really smokey, and a bit spicy from the peppercorn!

There were some raw onions underneath, but luckily they served it on a hot plate so the heat "denatured" the proteins that trigger OAS! :) 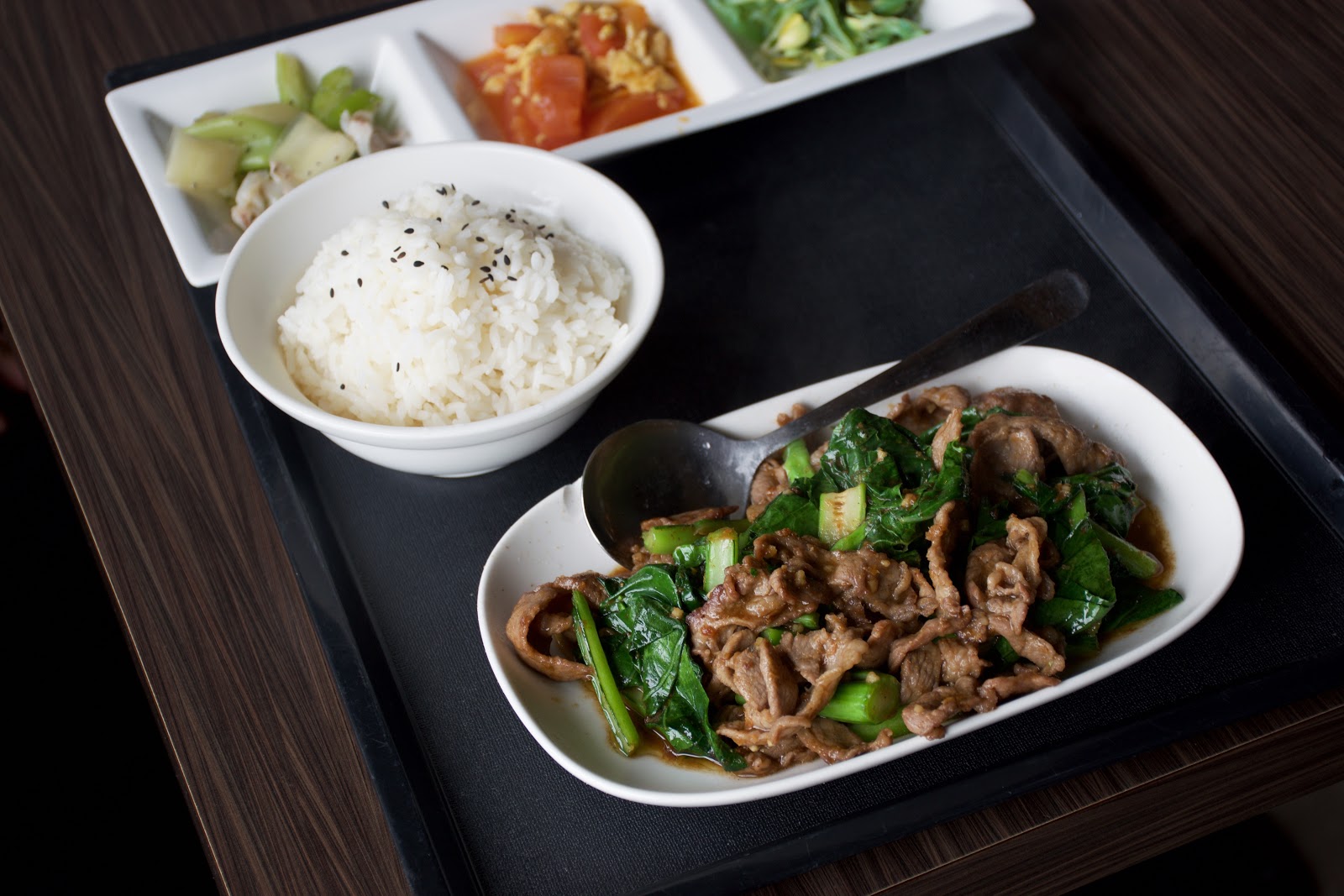 This was quite decent as well!! They used loads of satay sauce, which rendered the entire dish fragrant and flavourful! The lamb was reasonably tender, and it didn't taste gamey. It was sauteed with some greens which had soaked up all of the flavour from the sauce! 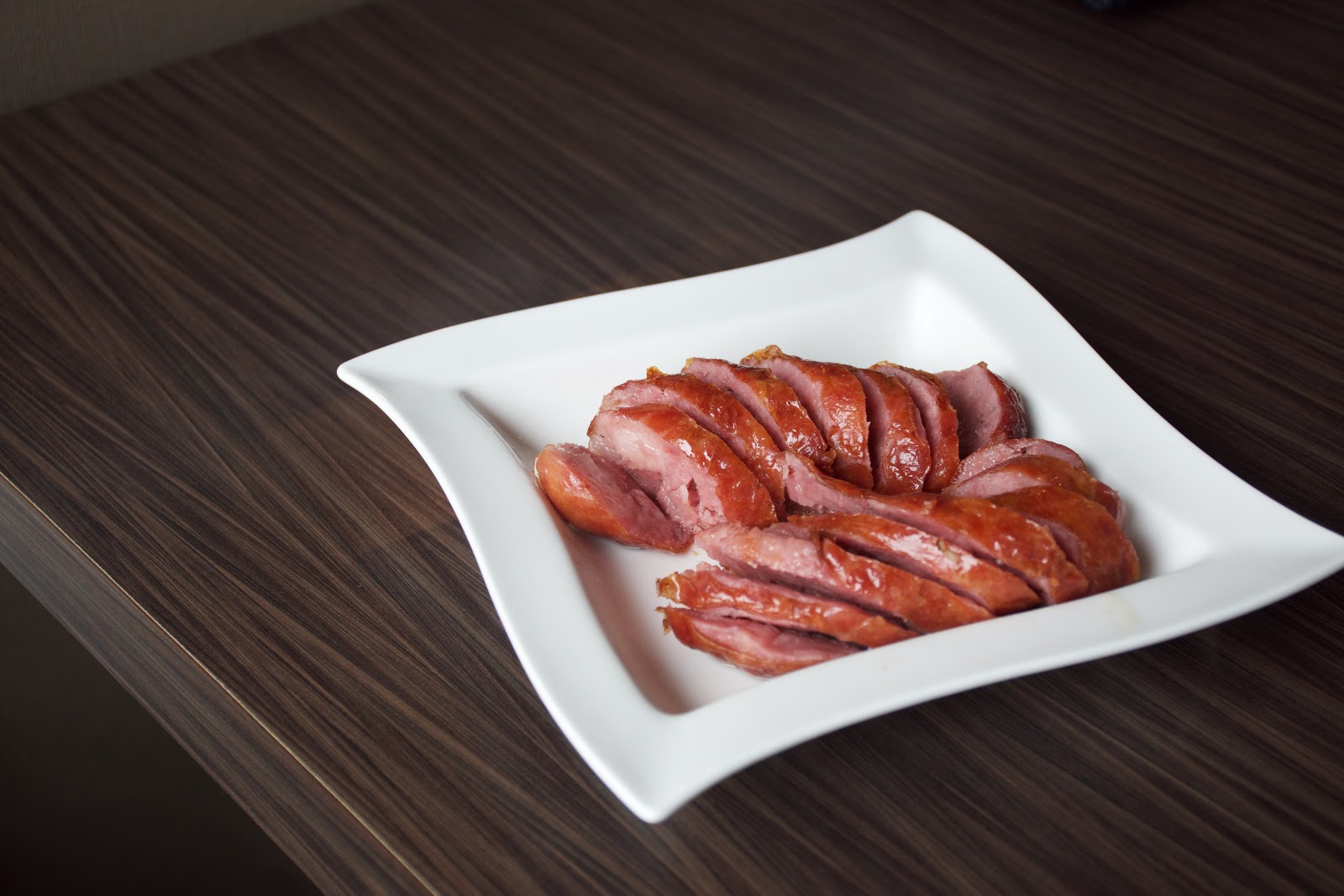 This dish was surprisingly great! I like it better it than Pearl Castle's version! It takes a while to make, because they have to smoke it! It arrived smoking hot and the smell was intoxicating. The sausage itself was really juicy (albeit a bit oily) with your typical sweet-salty flavours that one would expect from a taiwanese sausage! 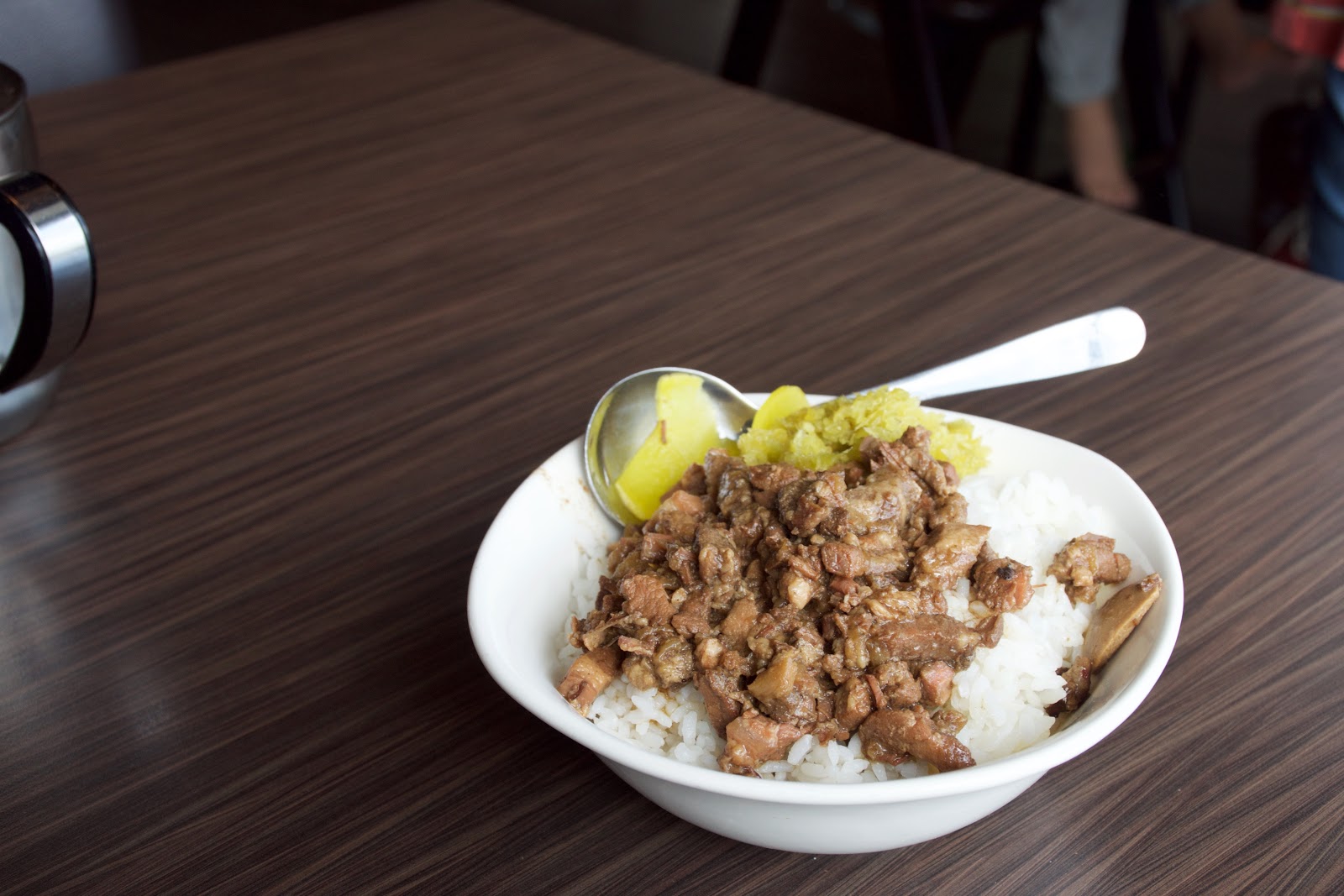 Lu Rou Fan (Taiwanese Meat Sauce on Rice) I asked them to omit the egg!

But can you spot the smaller sliver of egg on the right side of the bowl?! Thankfully I spotted it and scooped out the egg! Phew - that was a close call!

This was my favourite dish out of the bunch!! The portion size was really generous and it was loaded with a mountain of moist, braised meat!! The meat was flavourful and had a good mixture of lean/fatty pieces. Mixed with the sour cabbage, it was lovely medley of flavours! The rice was decent as it held up without getting soggy. 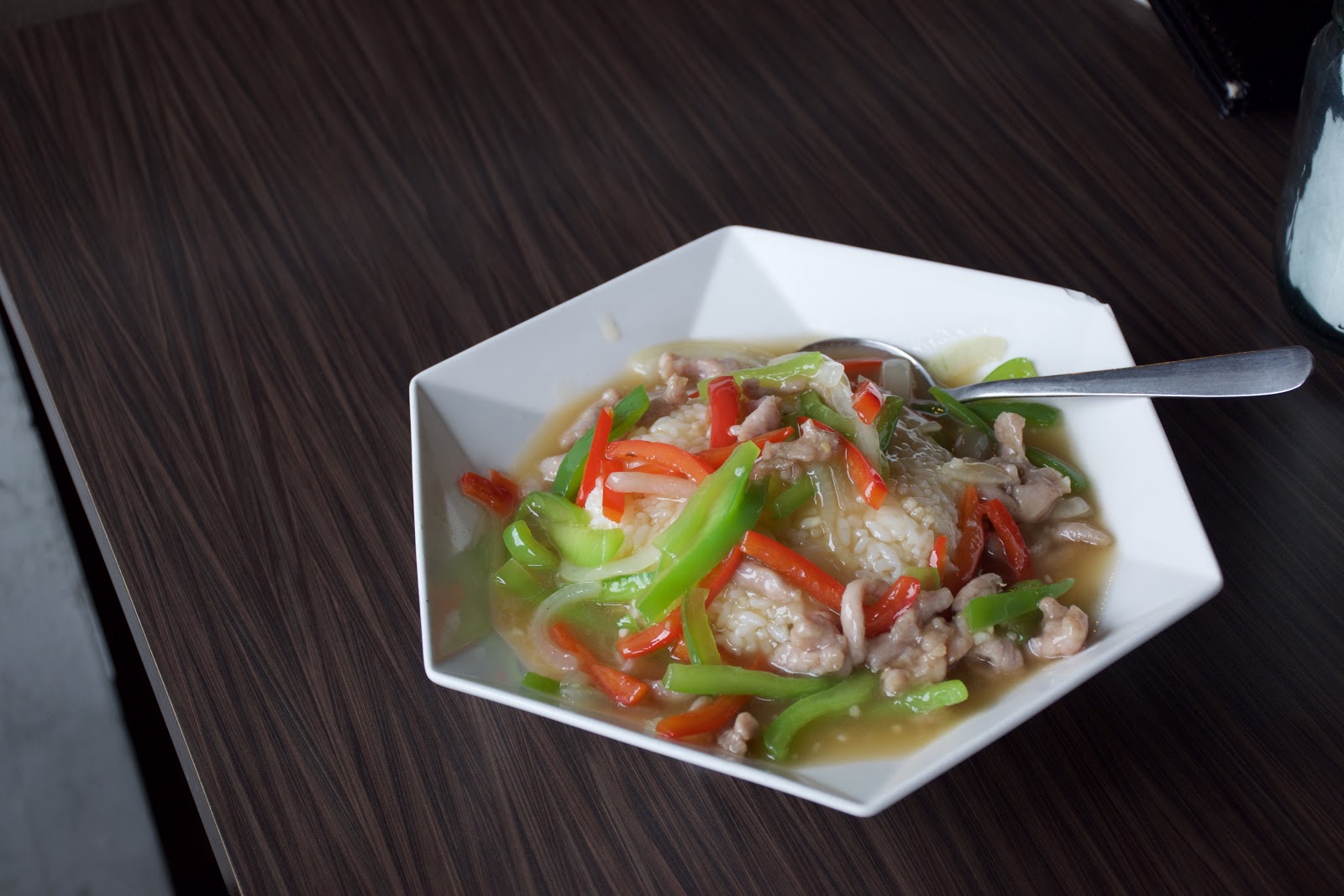 I was craving something healthy that day so I got this! This is semi healthy-ish right? ;)
The flavours were light but the sauce made the entire dish really comforting. The corn starch wasn't overly starchy. The bell peppers were crunchy and the pork was reasonably tender! 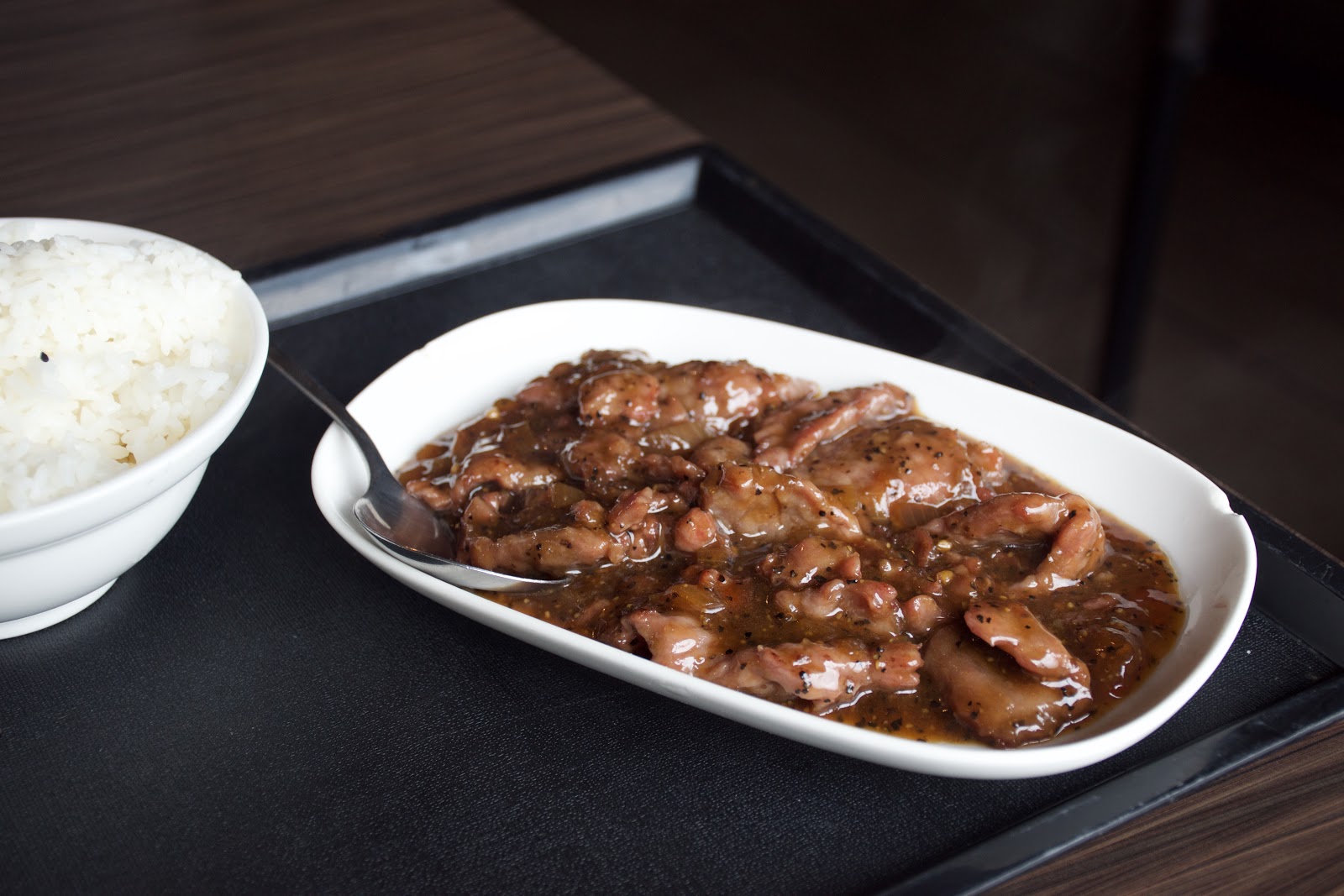 My dad went for the sliced black pepper beef and he said that it was solid! The beef was super tender, and bathed in a heavy dosage of black pepper sauce, so there was no absence of flavour. In fact, he liked it so much that he wanted to order it again, but I convinced him otherwise ;)  (hey, it's for blogging purposes dad!!) 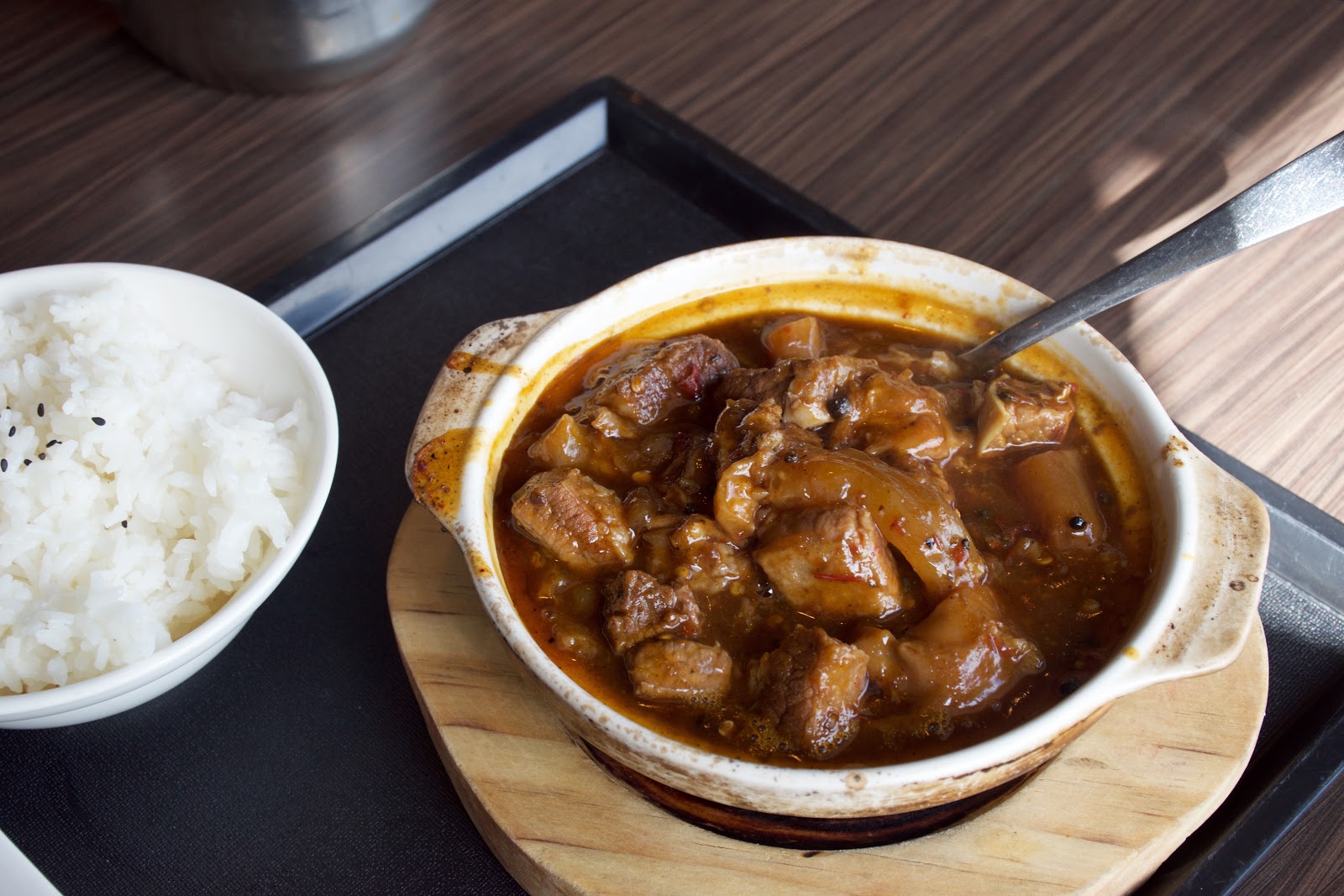 We tried their stewed beef brisket on our first visit and it was pretty good, so that's what prompted me to order this one! Sadly, the beef wasn't as tender as the one in the stewed version! The meat was rather lean, so it was rather tough. The tendon however, was well executed, as it was melt in your mouth tender. The flavours were decent,with a hit of peppercorn and spiciness from the sauce! 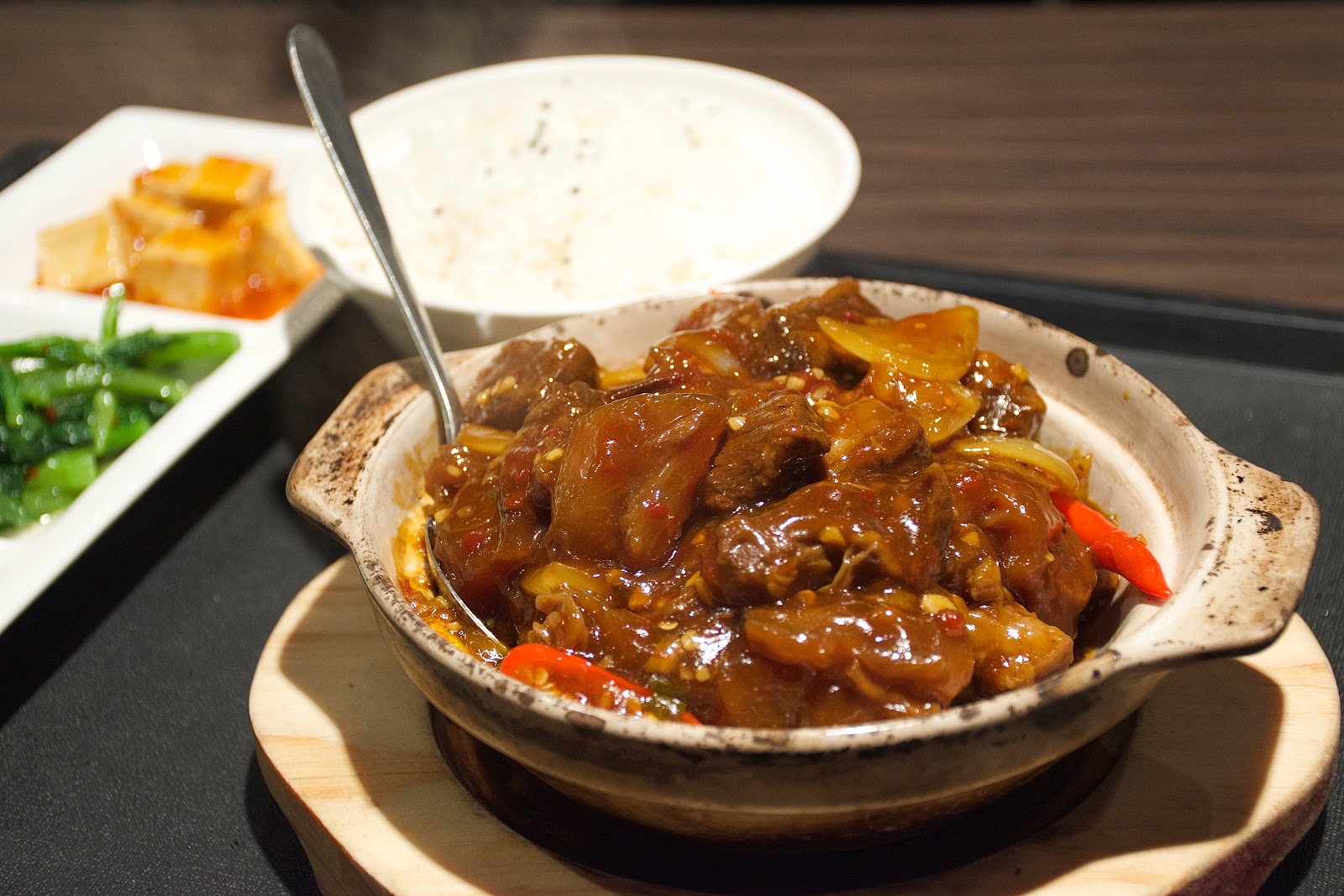 Well clearly I had a brain fart of some sort because I totally forgot that we had ordered the exact same dish a few months back! This version has bell peppers in it and the sauce looks thicker, whereas the one we had this week had more of a soup like consistency! 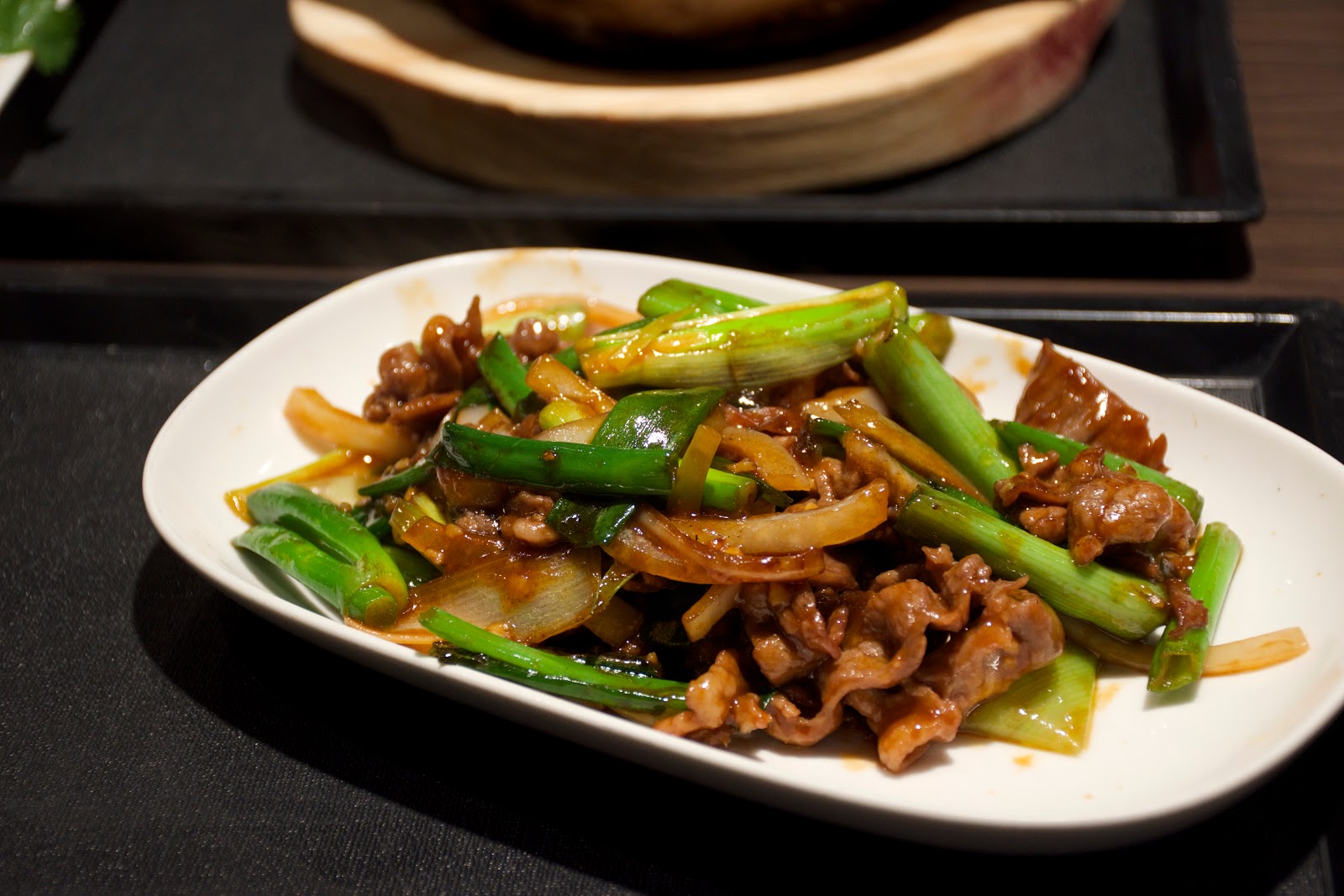 From what I remember, this dish was pretty decent as well! The lamb was reasonably tender and didn't taste gamey, and the plum sauce flavour was pretty strong. The ample amount of green onion made the entire dish really fragrant! 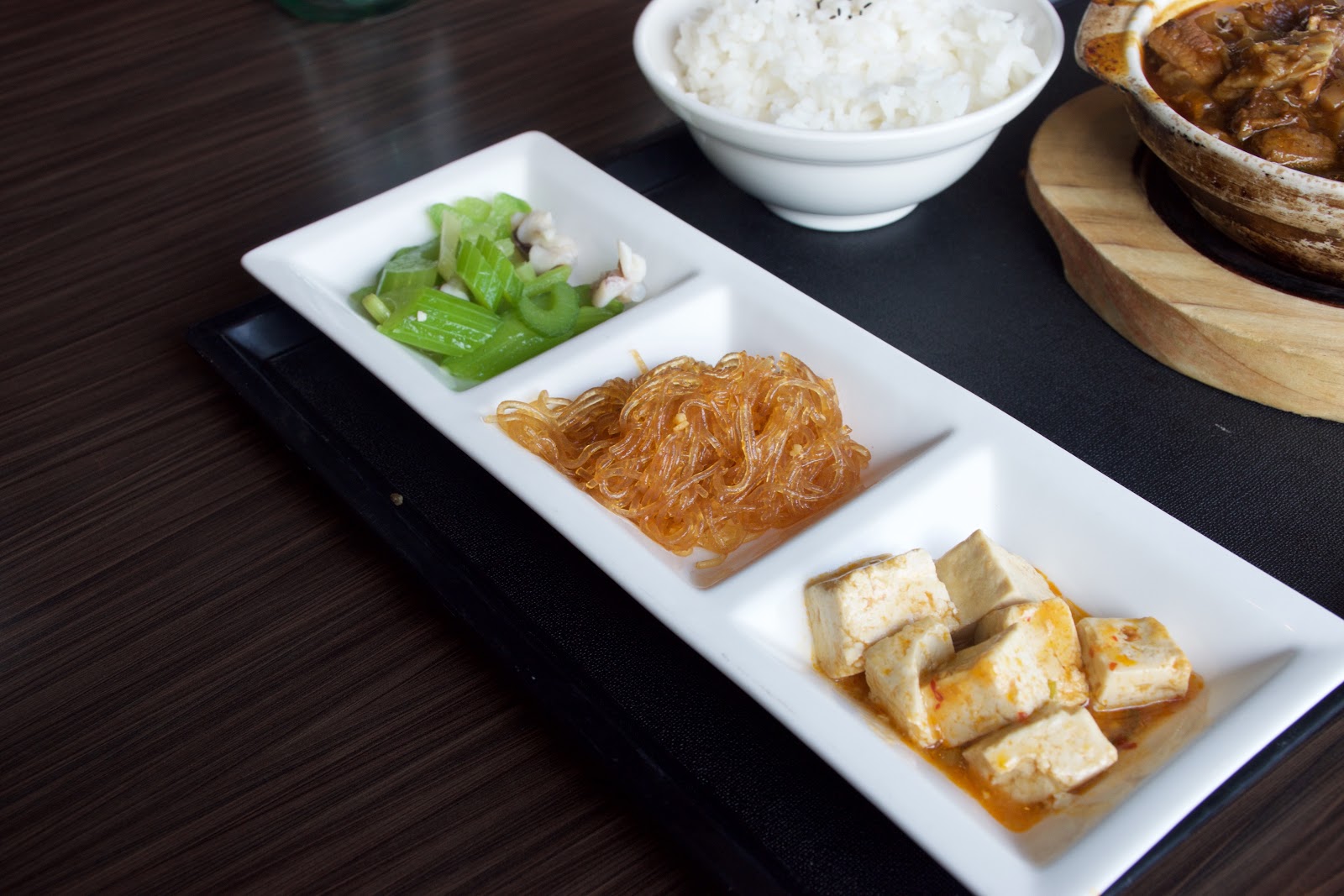 All of the combos come with taiwanese side dishes! Decent - nothing out of the ordinary! 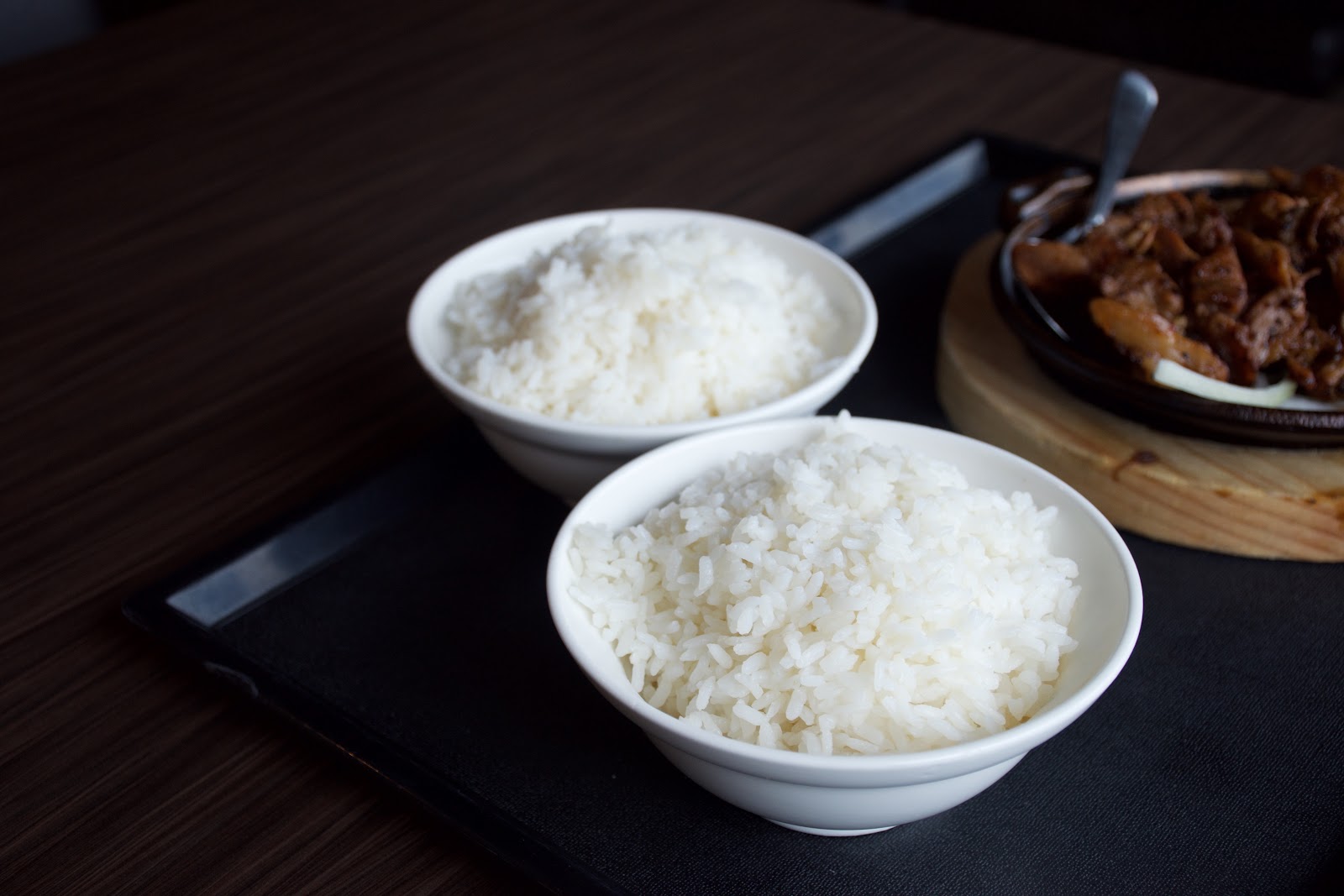 2 bowls of rice for me hehe - everytime!! ;)
Their rice is always perfectly cooked, I like it better than Pearl Castle Surrey's rice (which always tend to be semi soggy!) 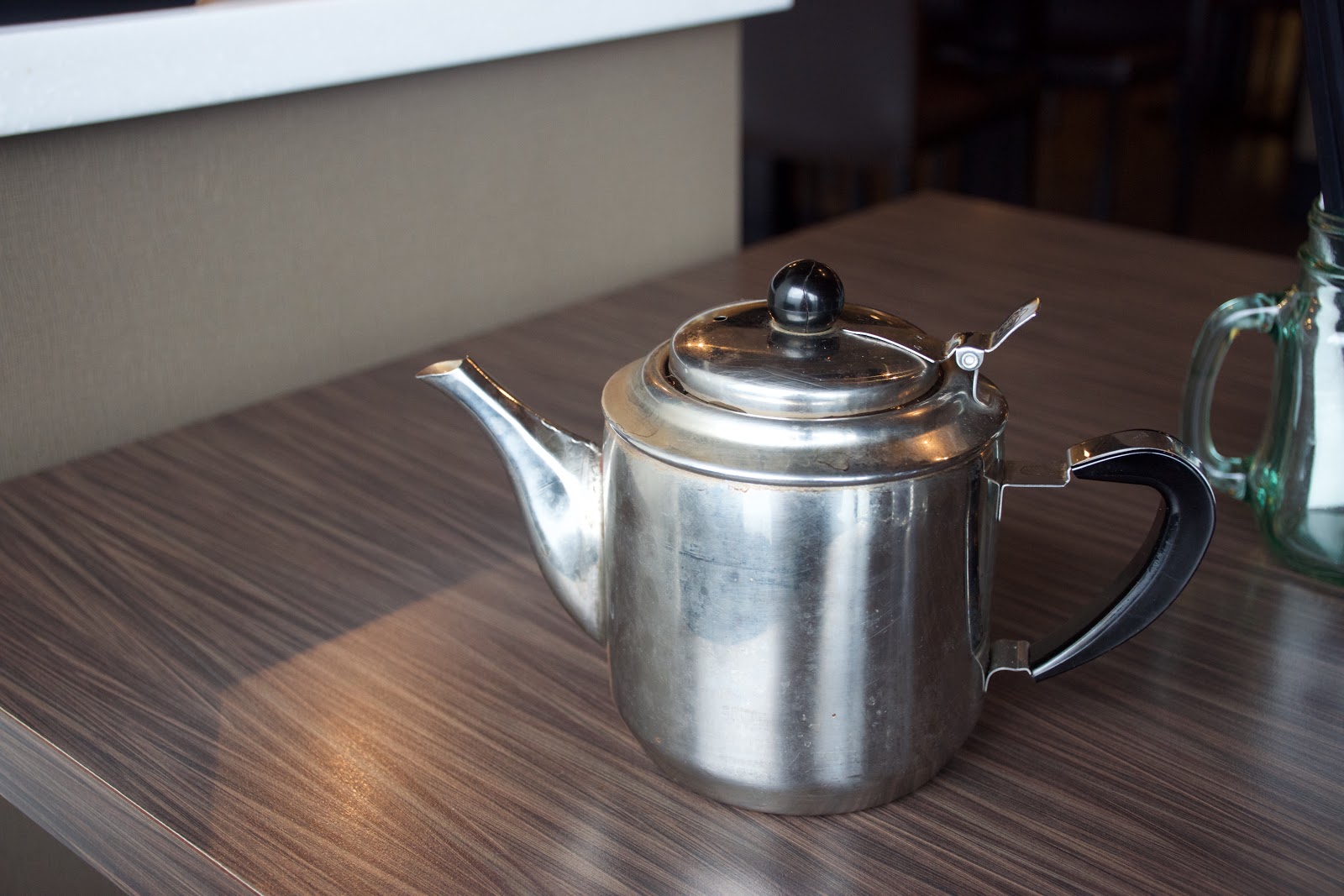