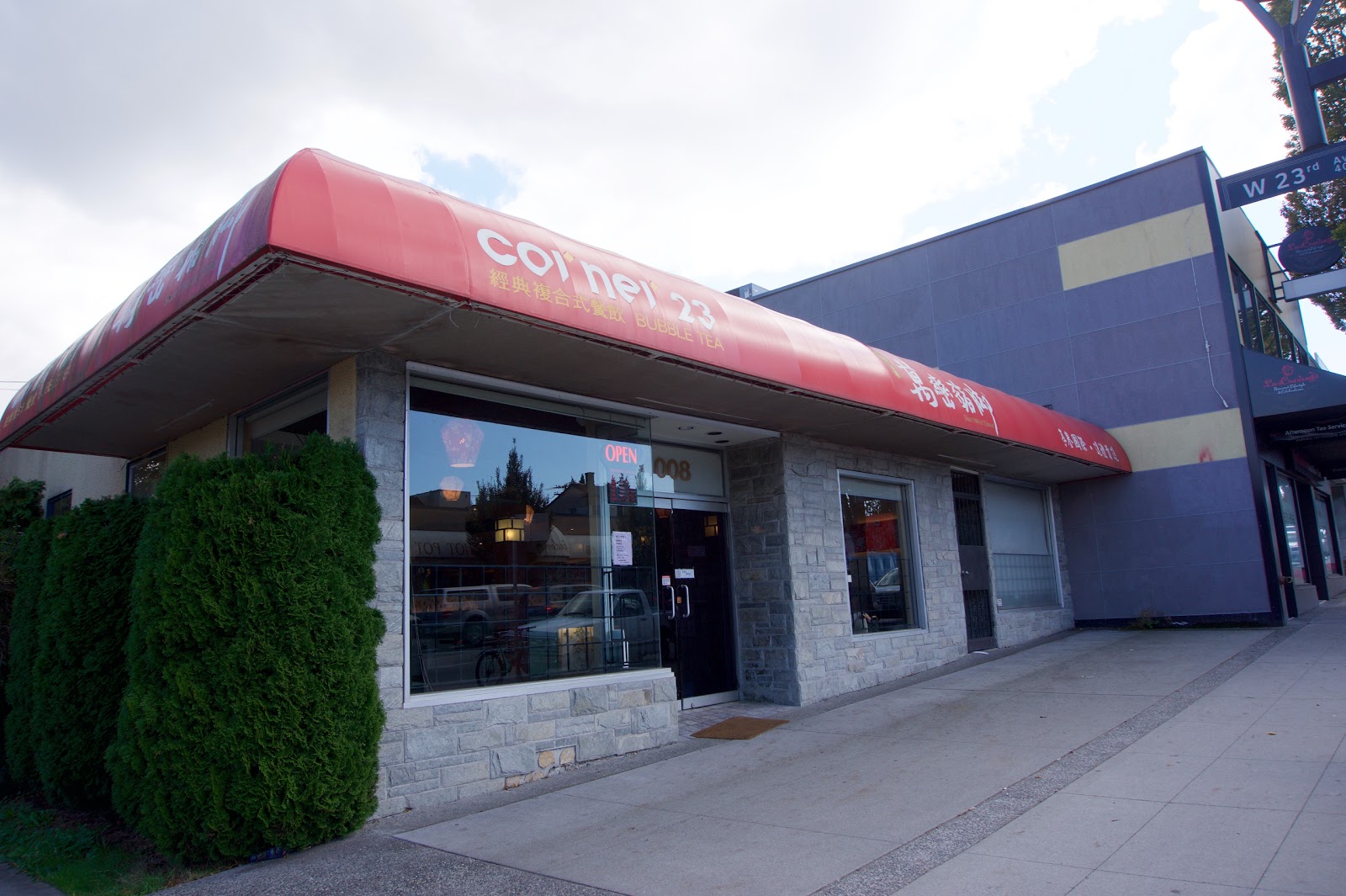 On Mondays I only have one class, which means I can sleep in (until 10!!) It also means I can take my sweet time eating (I eat really slowly) without having to rush to my next class :D Since I don't have class until 3:30 I have time to eat around Broadway/Kits/Cambie, so I have a lot more flexibility in terms of restaurant selection!!

Last week when I went to Copa Cafe, I spotted Corner 23 a few doors down!! Corner 23 is a Taiwanese cafe/bubble tea place that specializes in set meals. And you guys know how I feel about Taiwanese cafes!! For me they're basically the equivalent of Taiwanese fast food. Quick, relatively affordable, and pretty predictable!

I'm a fan of their famous pork hocks, which I tried at Uncle Lu's (their sister store) in Richmond, so I had high hopes for Corner 23! Thankfully I wasn't disappointed! :D  Even though their menu is exactly the same, I feel like Corner 23 gives off a bubble tea cafe/teenybopper vibe, whereas Uncle Lu's seems more "high end" (is it just me?) I think it has something to do with the layout of the store: Corner 23 is laid out like a quintessential bubble tea cafe, and they have Justin Bieber songs playing in the background (which obviously helps) ;)

Their pork hocks were really tempting, but I wanted to try something different, so I ordered their hakka pork instead, after seeing a picture of the dish on yelp! Like always, I asked for 2 bowls of rice hehe. So I ended up eating 3 bowls of rice - 2 bowls of white rice and one large bowl of Ru Lo Fan ;)

Yesterday I went to their Richmond location (Uncle Lu's) and they said they couldn't substitute the side dishes for the rice, but at Corner 23, they said that they could! I guess it depends on the management and who's working that day.

The guys serving me were really nice! I ask a lot of questions (what are the ingredients in this, can you omit this?) because of my allergies, and the servers didn't look annoyed at all! They were really polite and courteous throughout my entire meal! :) 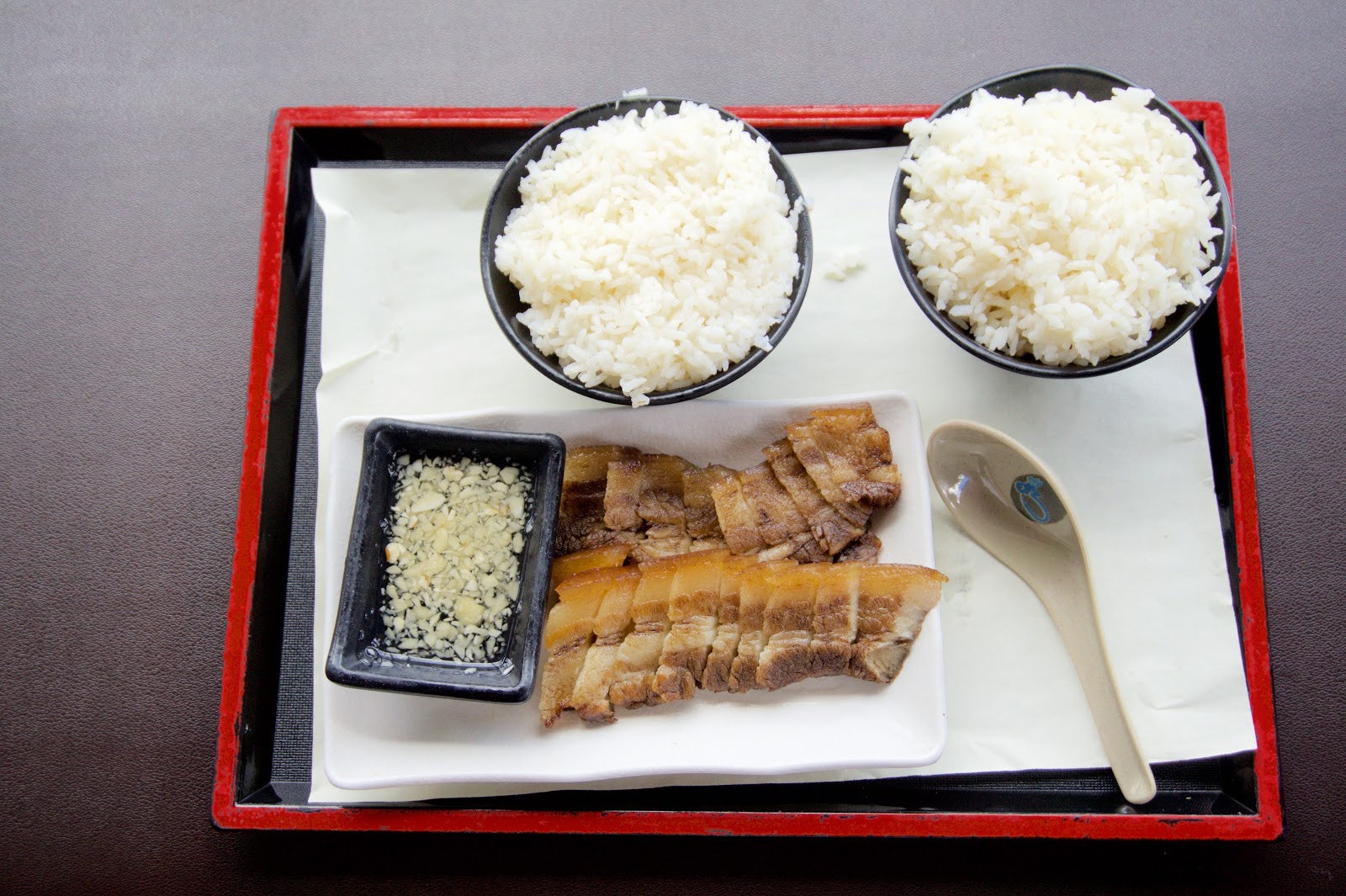 I saw a picture of this on yelp, which made me want to order it (yelp tends to do that to you.) The pork was really thinly sliced, but it was really tender, with a nice ratio of lean to fatty pieces. Flavour wise it wasn't really strong, but you could definitely taste the spices they used to marinate the meat in! It also came with some garlic sauce on the side (which I didn't use) because I don't like having garlic breath harhar. The rice was average, but I devoured it, being the rice bucket that I am. 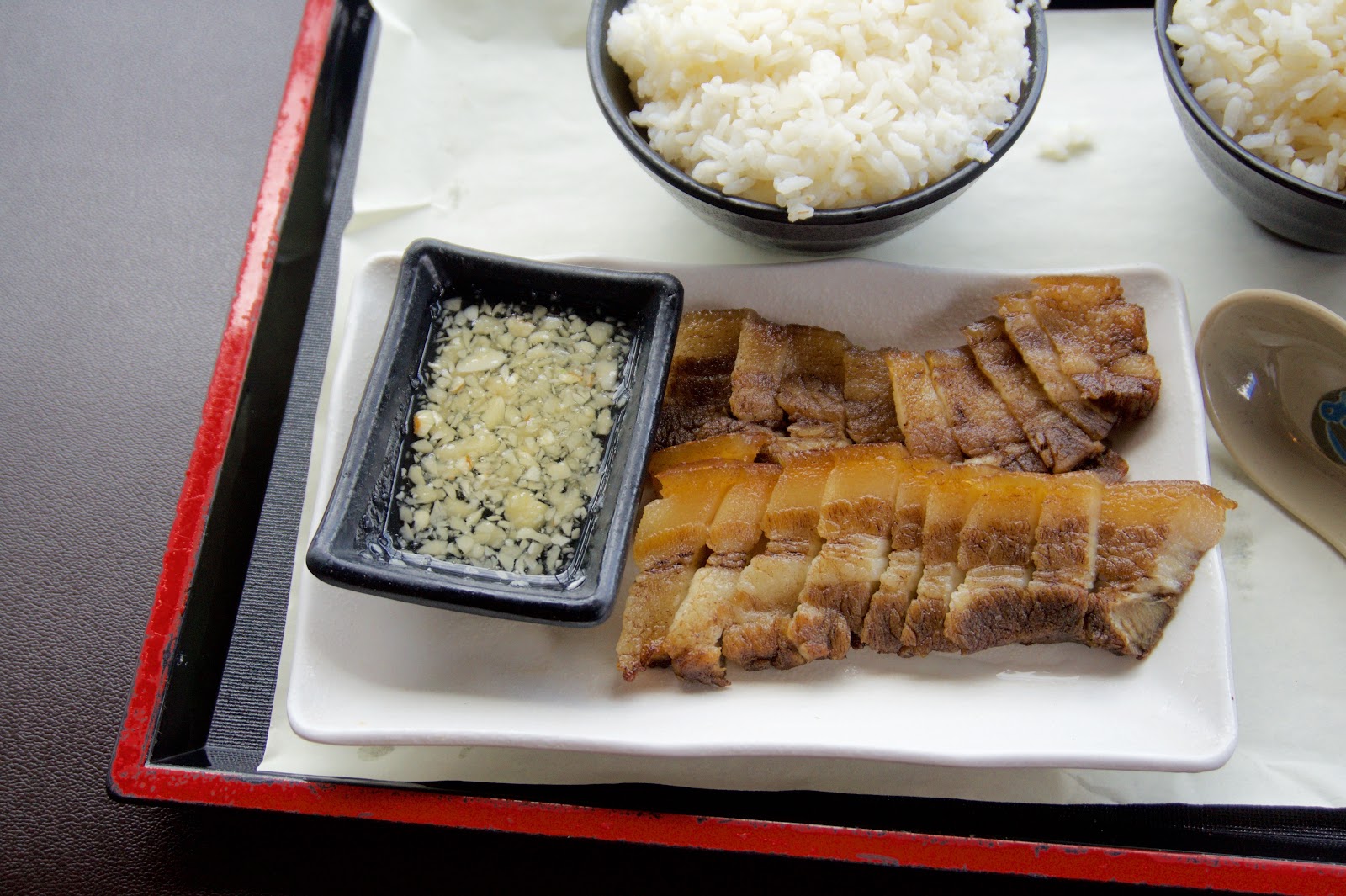 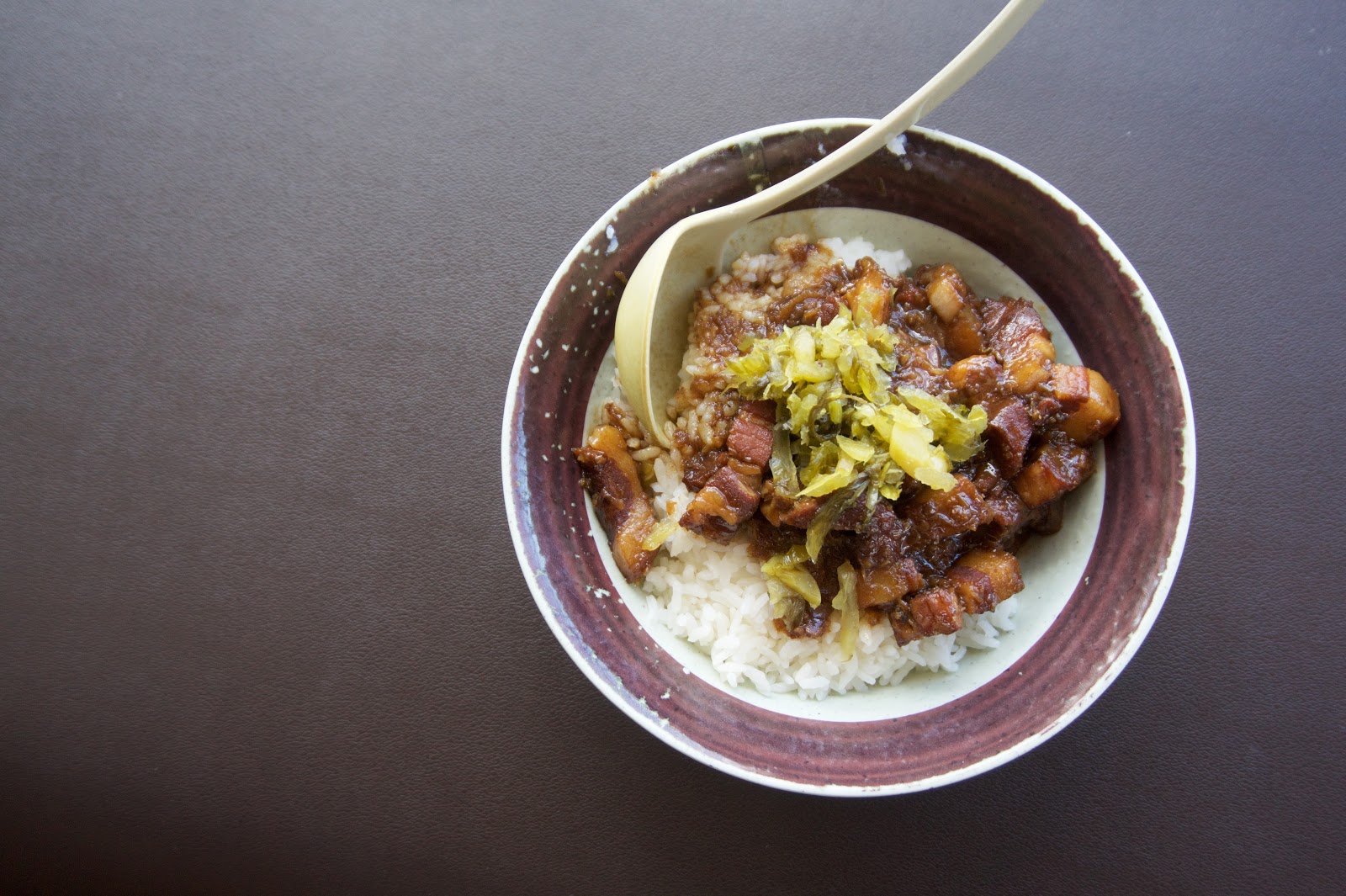 I wasn't expecting anything special, but this was really good!! The fatty: lean ratio was spot on, and the meat was moist and really flavourful! The meat sauce was more on the sweet/savoury side! The rice grains were moist and soaked up all the flavours from the sauce. The sour cabbage helped lighten things up and added a punch of sourness to the meat! 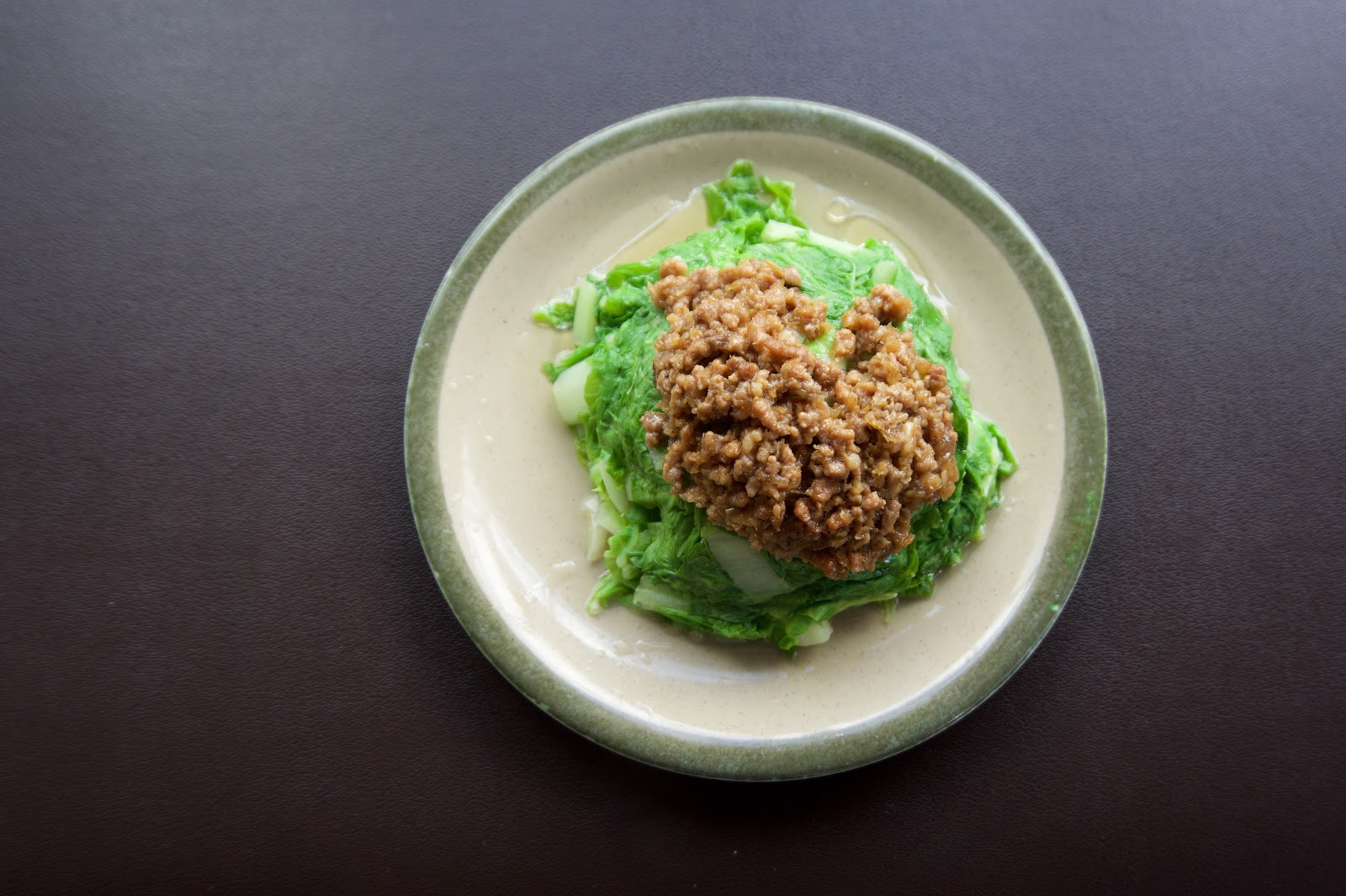 I can't believe I'm giving steamed cabbage 4/5 stars, but this was really yummy!! Way better than Pearl Castle & Bubble World's version! The minced pork was really flavourful, it was more sweet than savoury. The cabbage was pretty average, but I liked how it was a bit overcooked because overcooking veggies makes me less prone to an OAS reaction, because it kills the proteins that people with OAS react to.