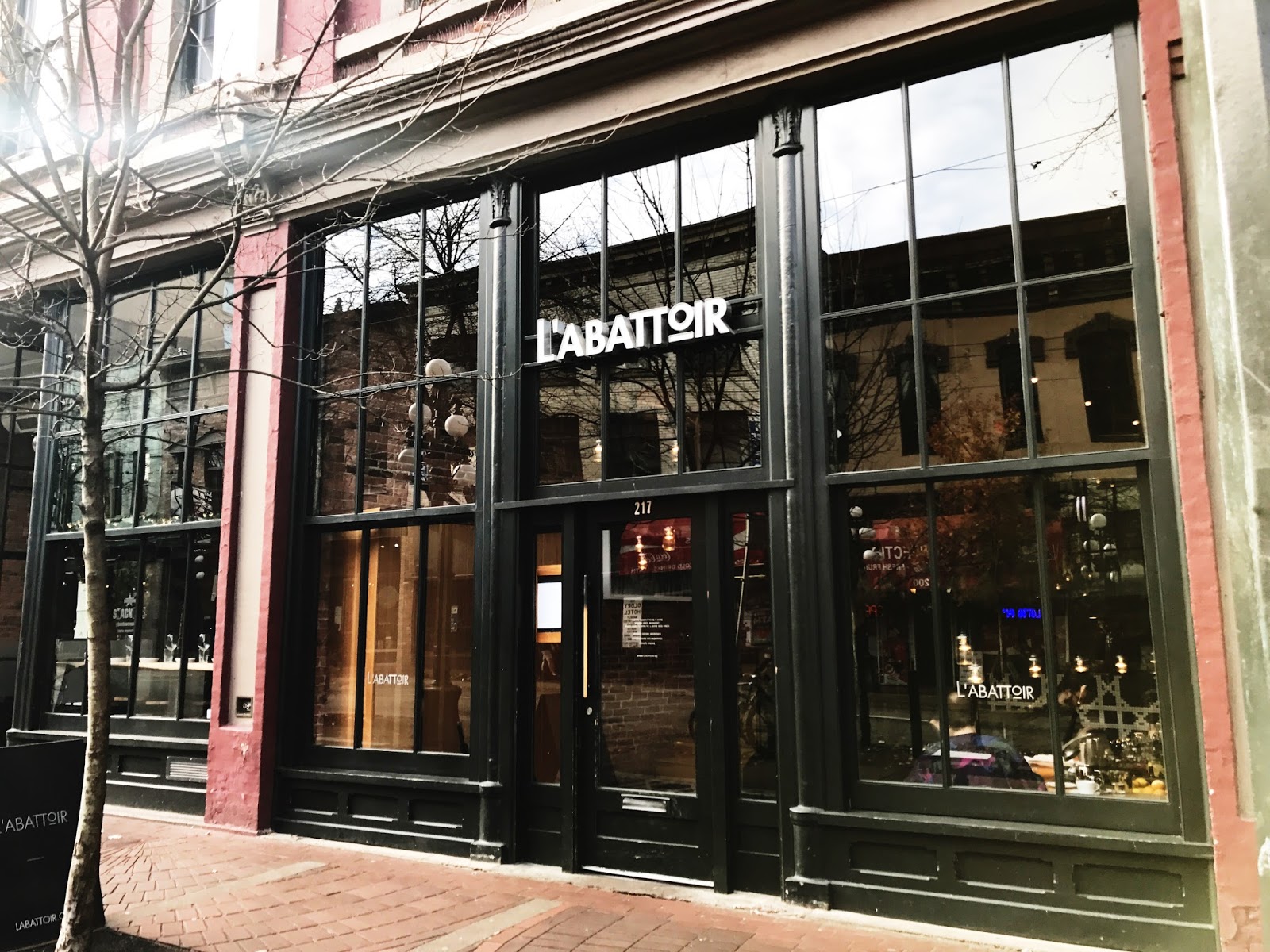 "So is brunch a thing of yours now?" What are you talking about, it's always been a thing of mine! (As evidenced by my brunch-crazed phase circa 2015.) And I'm pretty sure we can all agree that brunch is the bane of every Vancouverite's existence (in the most ironic of ways.) As demonstrated by the ridiculously long lineups outside of Medina come Sunday morning...

Brunch is a swell time during the week...ain't it? I reckon that most of you look forward to it (I know I do) whether it be in the form of some hierarchically ranked har gows or instagram worthy quiches. A time when one can extravagantly squander away the wee hours of the morning, without an incessant care in the world; expertly pressed drink in hand, fat sausage in the other.

Oh, something that I have yet to mention to you guys is that my allergy treatment sessions have been going well, so well in fact that I can eat raw veggies and fruit now!! I'm finally free from the suffocating chains of Oral Allergy Syndrome!! (Literally.) Remember when I had to request for servers to omit anything remotely raw from my plate? Not only was it heinously awkward, it was horribly tedious for both the waitress and the kitchen staff who were on the receiving end of things!

Man oh man, am I relishing in the fact that I can indulge in salads and fresh fruit now! Come summer, don't expect to see me without a cold pressed juice in hand (spirulina and all.) 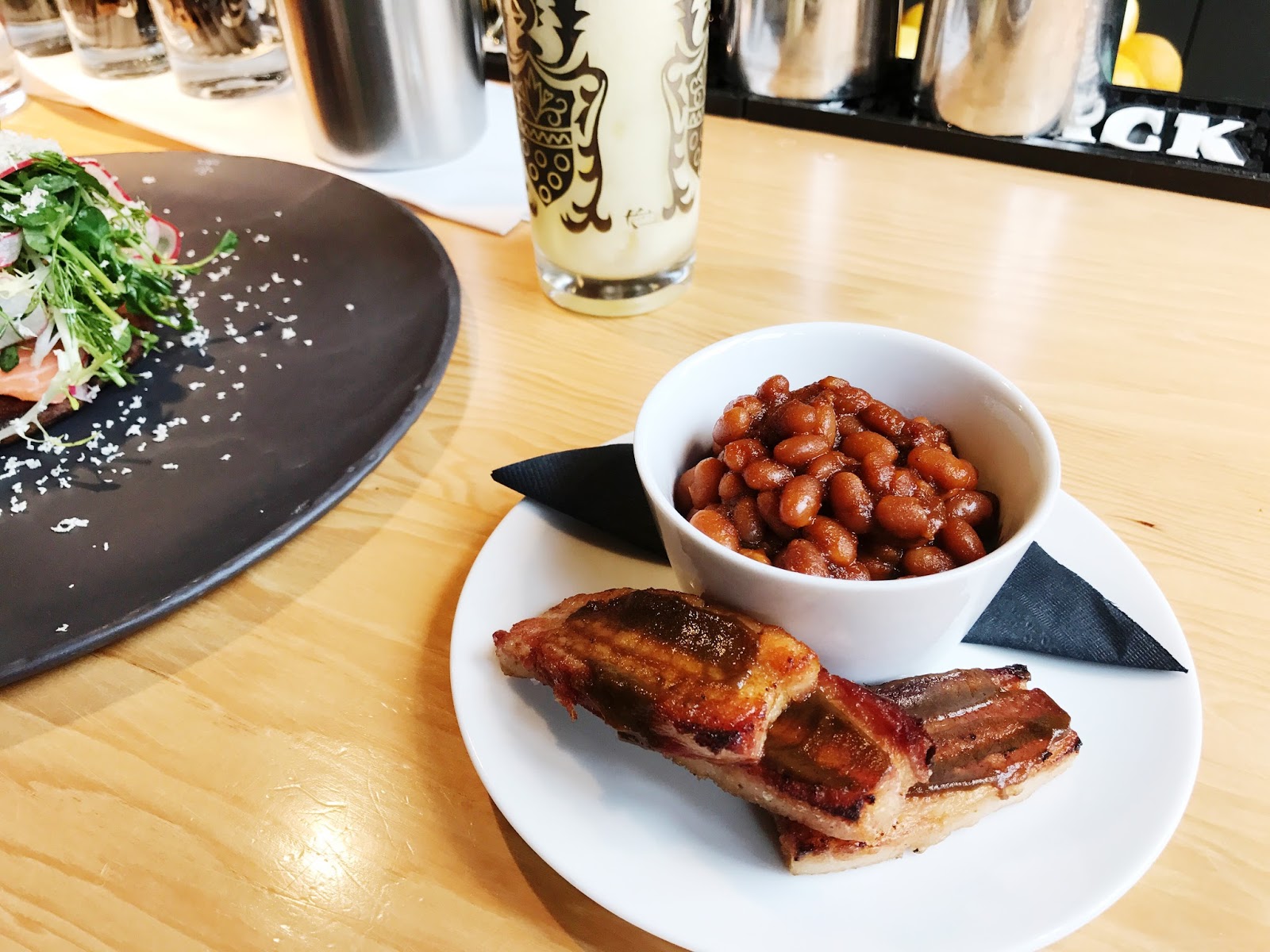 So how did this stack up (pun intended) to Fable's pork belly from last week? Fable's pork belly is marginally better I'll say, but L'Abattoir isn't far behind. Value for dollar wise, at Fable you get 1 piece of pork belly for $5, whereas at L'Abattoir you get 3, plus a hearty serving of their baked beans. The beans were absolutely captivating, as good as beans can get really. The pork belly was glazed in an aromatic, deliriously rich sauce that further punctuated the sear of the pork. 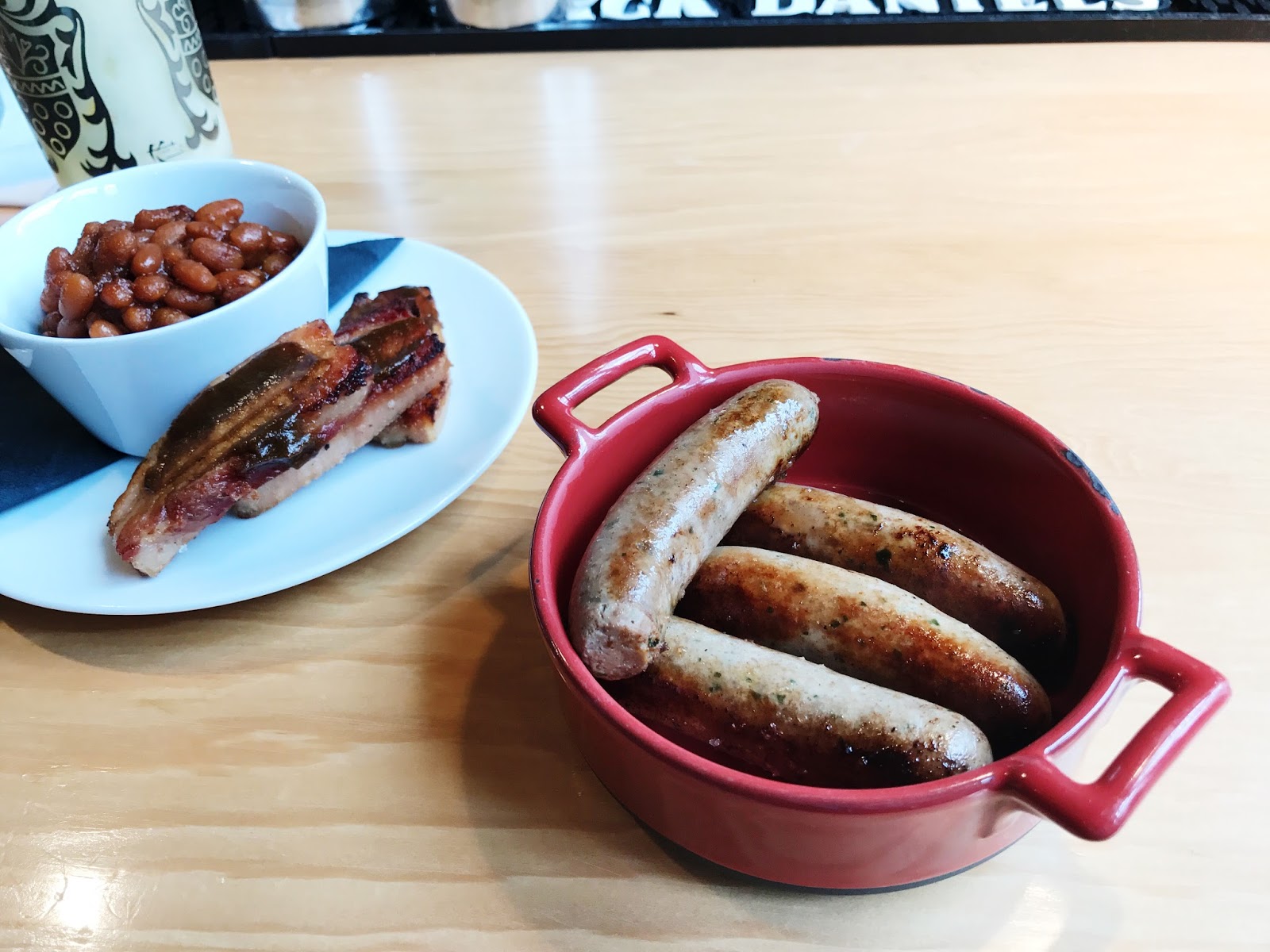 4 pieces for $5, not a bad deal I would say! Sausages are lovely when they're not the over processed kind. The duck flavour was apparent but not overwhelmingly so; the herbs took centre stage. 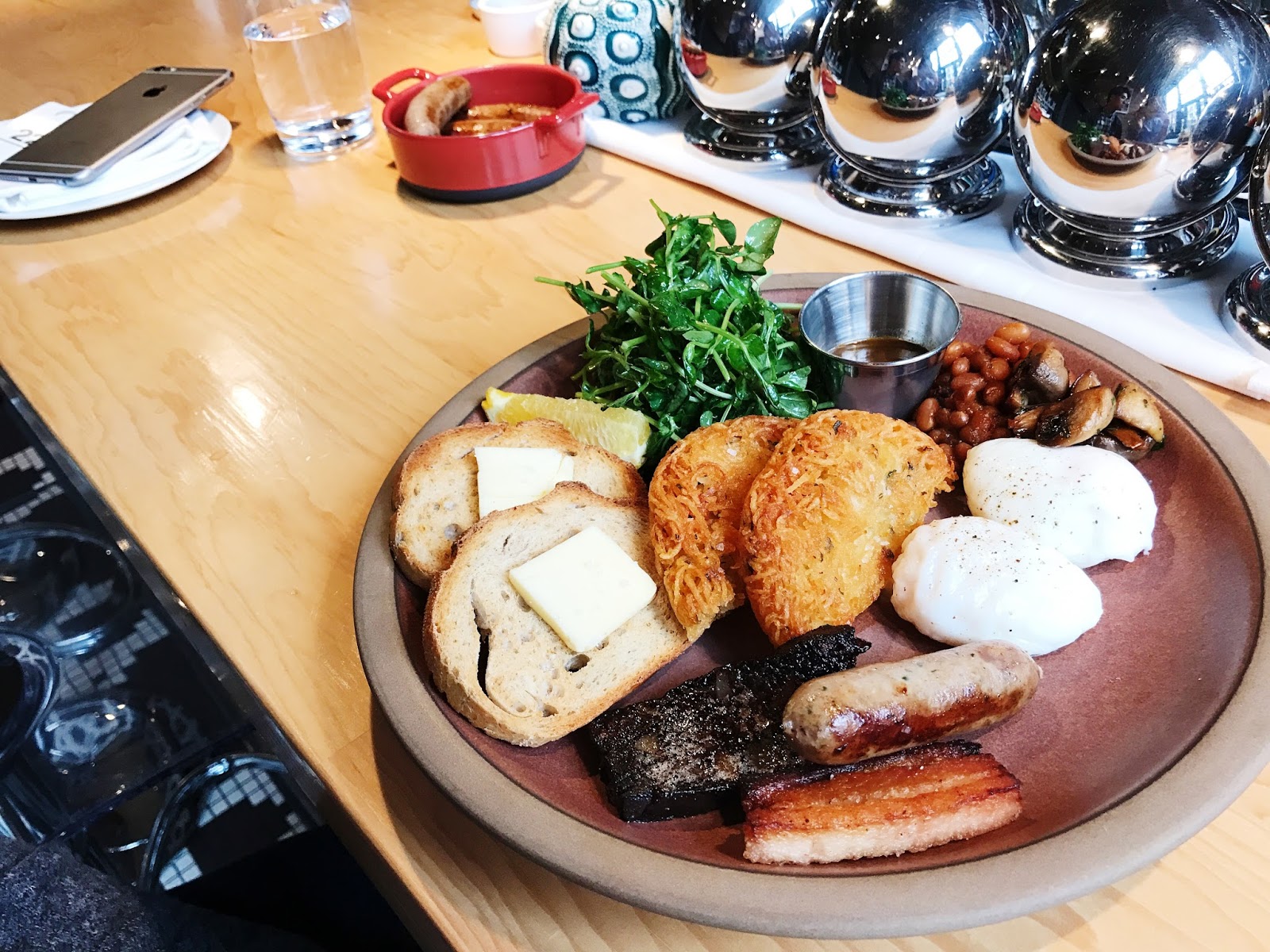 Jeremy & I were both eyeing the full breakfast, but in the end I opted for the Steelhead Pancake (as per the server's recommendation.)

I was assuming that they would serve the eggs sunny side up (given that they didn't ask Jeremy how he wanted his eggs) but they went for poached (my preferred method of eating eggs when dining out.) All the components were wonderfully assembled, down to the earthy, truffled mushrooms and the exquisitely buttered toast. I had a bite of the rosti and it was certainly worth mentioning. We weren't sure what the jam was composed of, but boy, was it heavenly! The boudin noir (blood sausage) was a real treat as well! 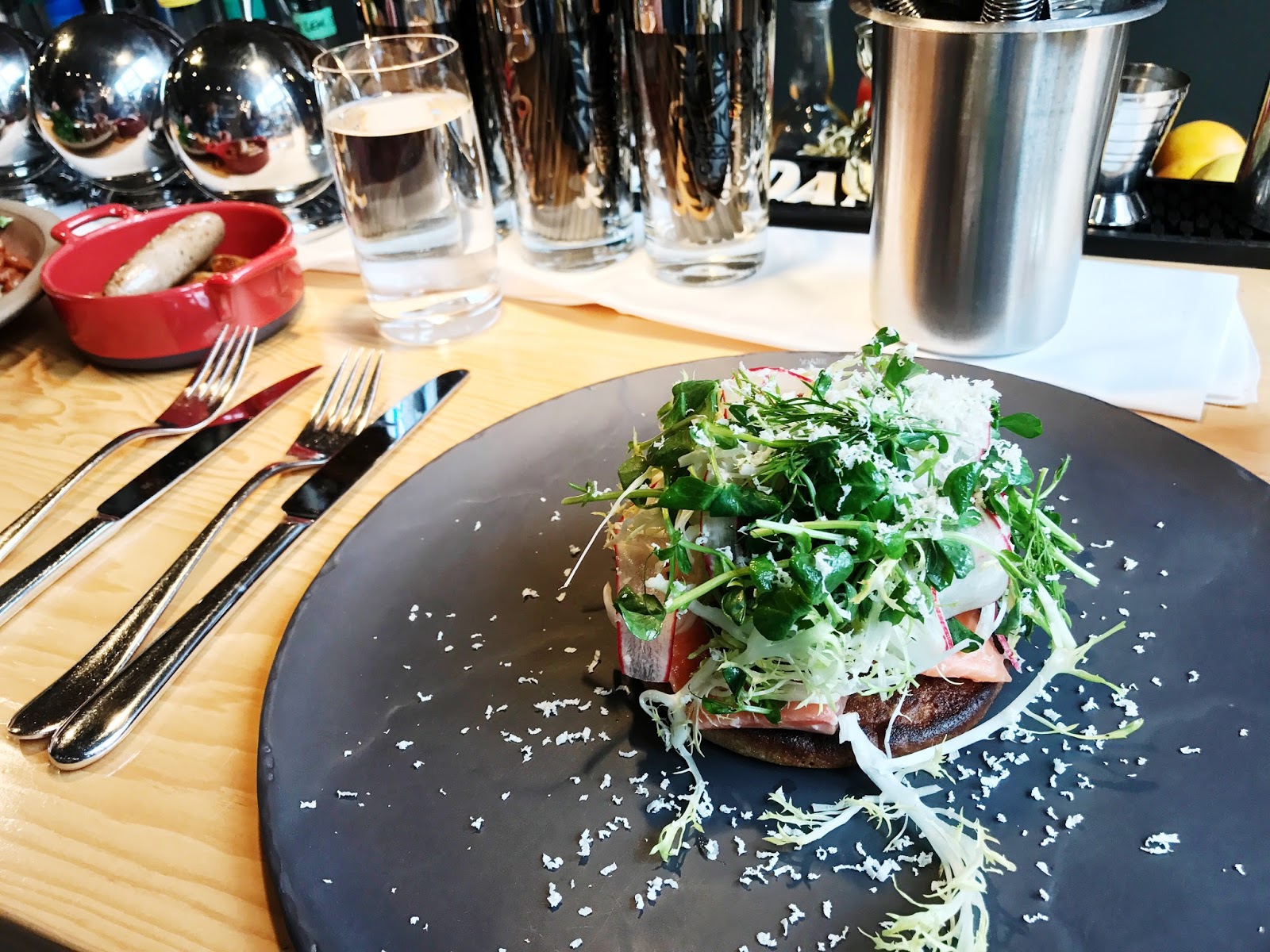 Buckwheat pancakes for me, given that buckwheat is naturally gluten-free! (My server recommended that I order the pancakes when he found out about my gluten intolerance.)

I didn't read the description so I was delighted to find a poached egg buried underneath the mountainous pile of veggies! The salmon was lightly grilled to maximize tenderness and was artfully arranged on top of a deceivingly thin mound of pancake. As promised, the pancake did indeed exhibit a voluptuous smokey flavour, which was furthered accentuated by the buckwheat. 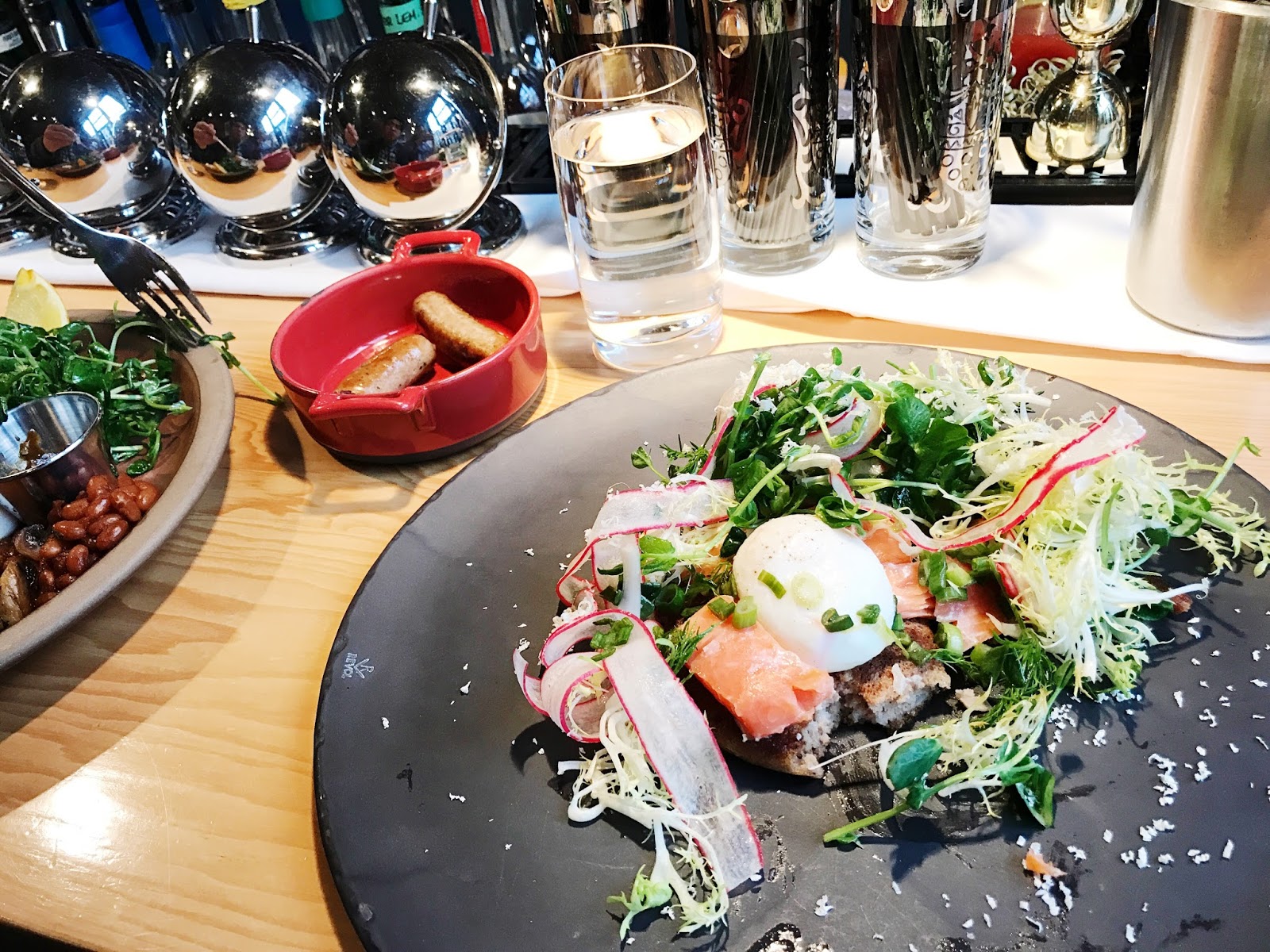 What is this...an Easter egg hunt? 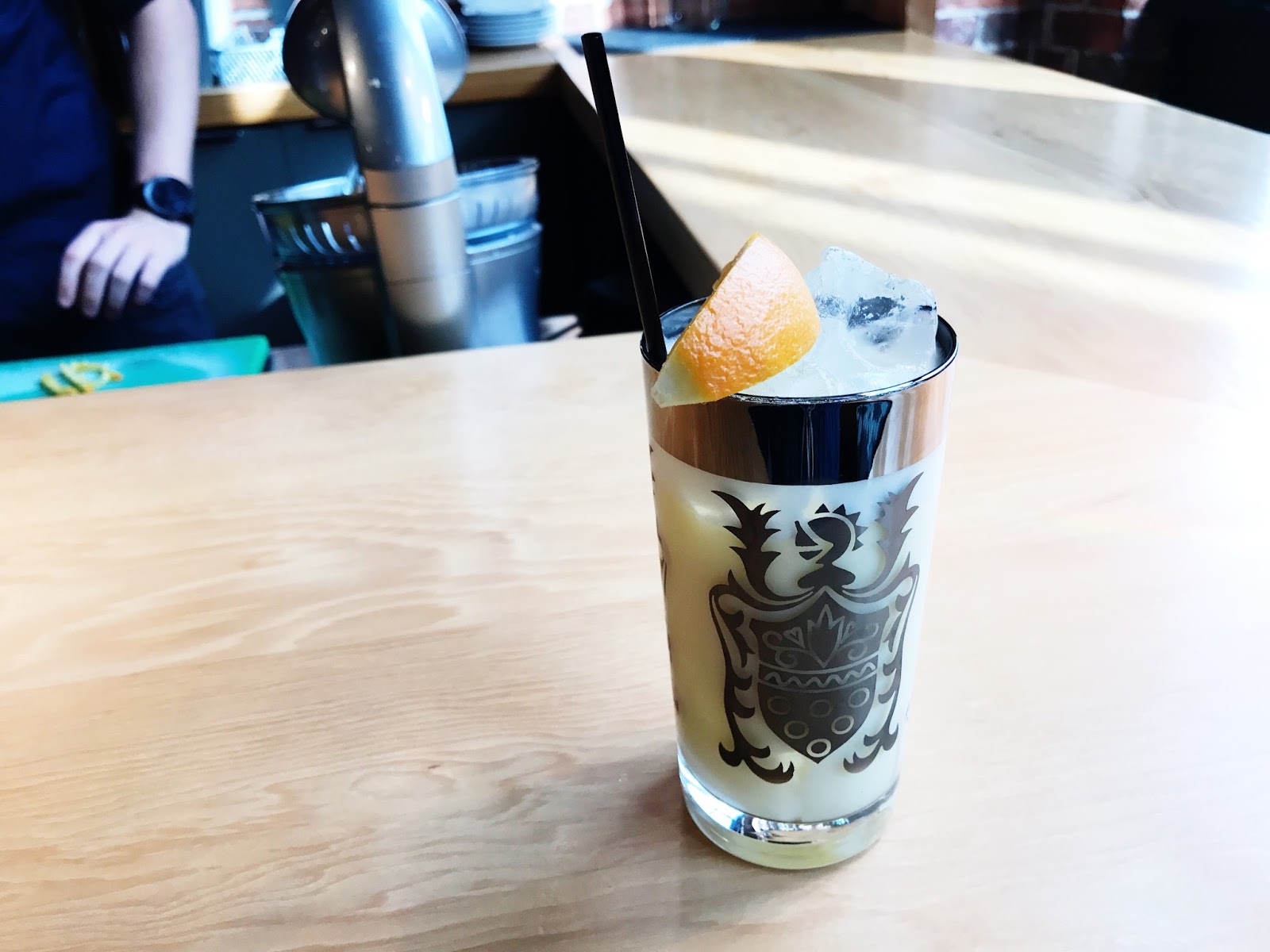 Orange Julius $5
Fresh OJ, Egg White, Pineapple, Vanilla
Maybe it's just me, but I always leave my drink till the end so I can drink it as a dessert!

Yes, a habit of mine is waiting until I've finished eating to dip into my drink. Some may find it odd, but I find it...refreshing? (In the literal sense.)

Jeremy was intrigued by the described prescription that called for a mixture of egg white, orange juice, and pineapple. What kind of a concoction was this?! Well, I inhaled the drink in a matter of seconds, because it was just that good, my friends. I think that attests to how delectable it was. 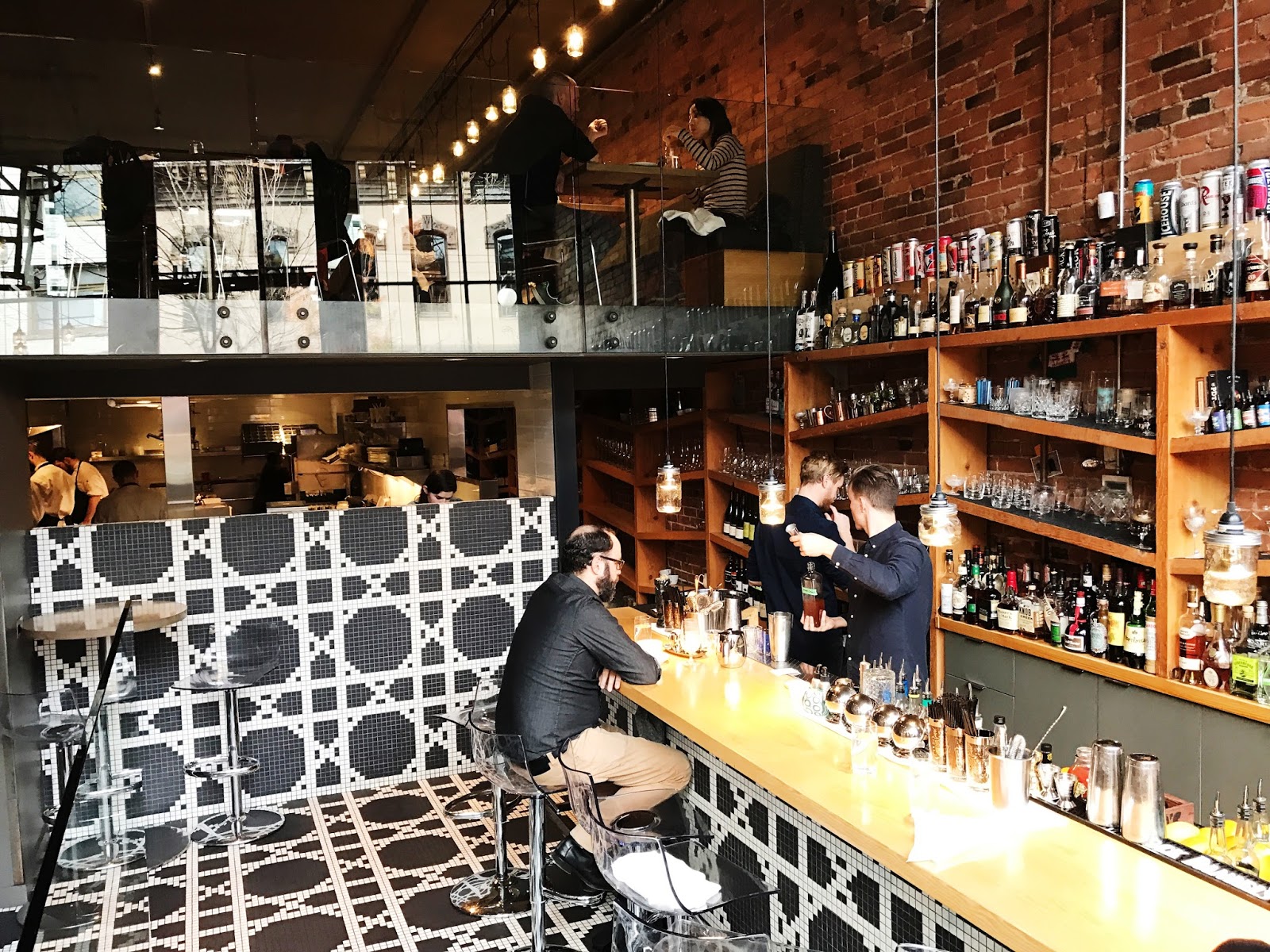 Fact: In French L'Abattoir translates to "Slaughterhouse." L'Abattoir just so happened to be the site of Vancouver's first jail! 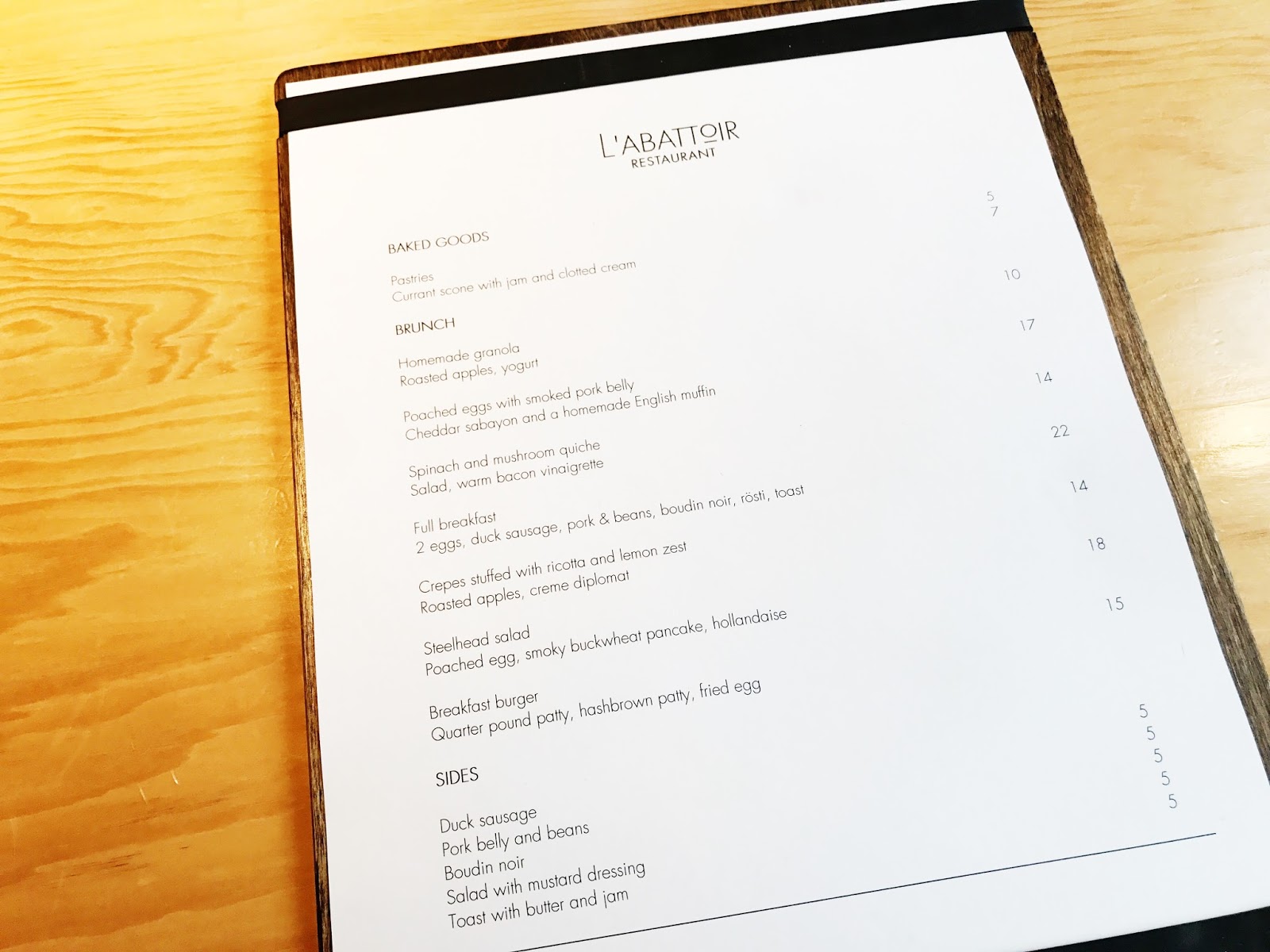 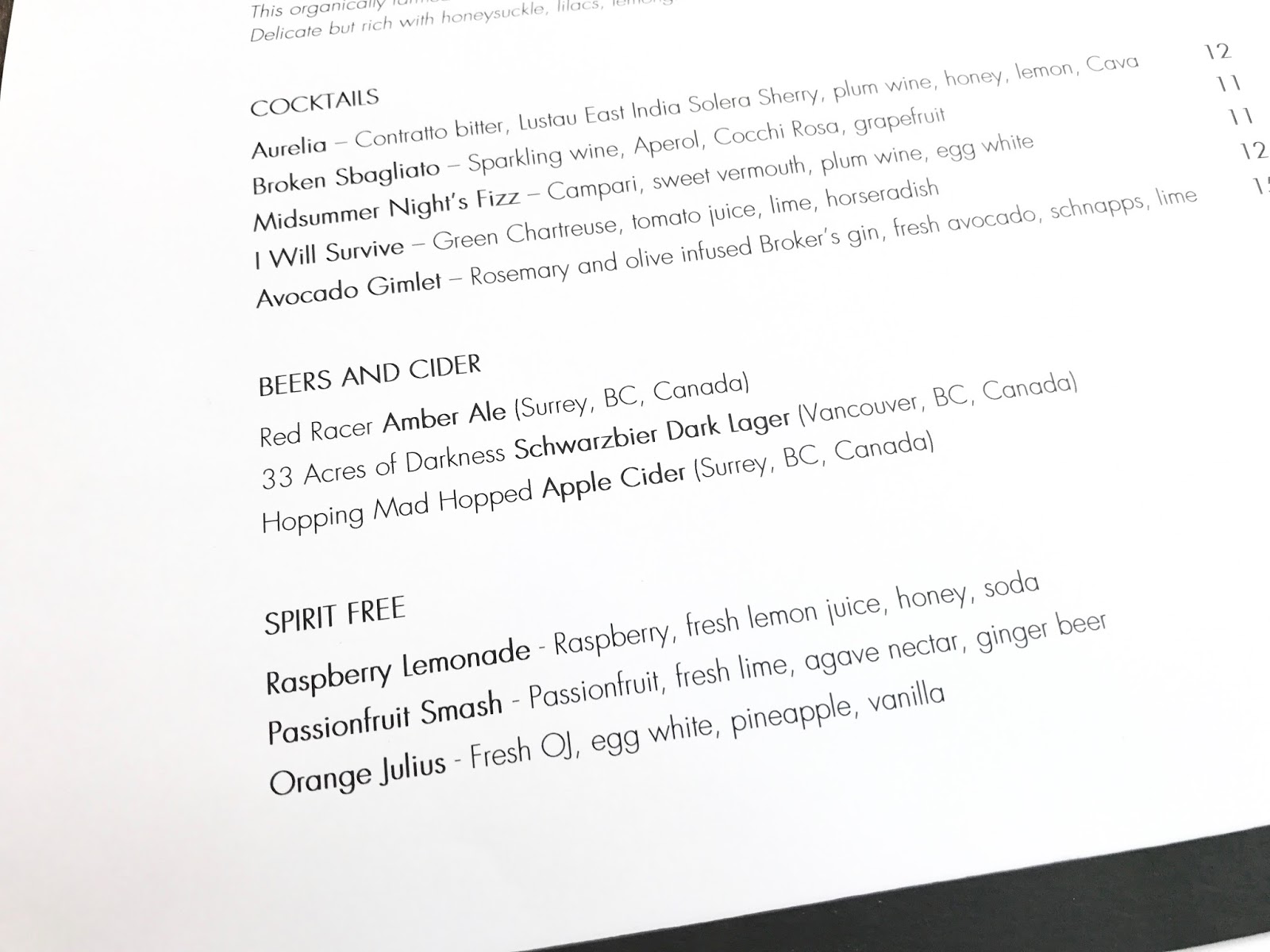