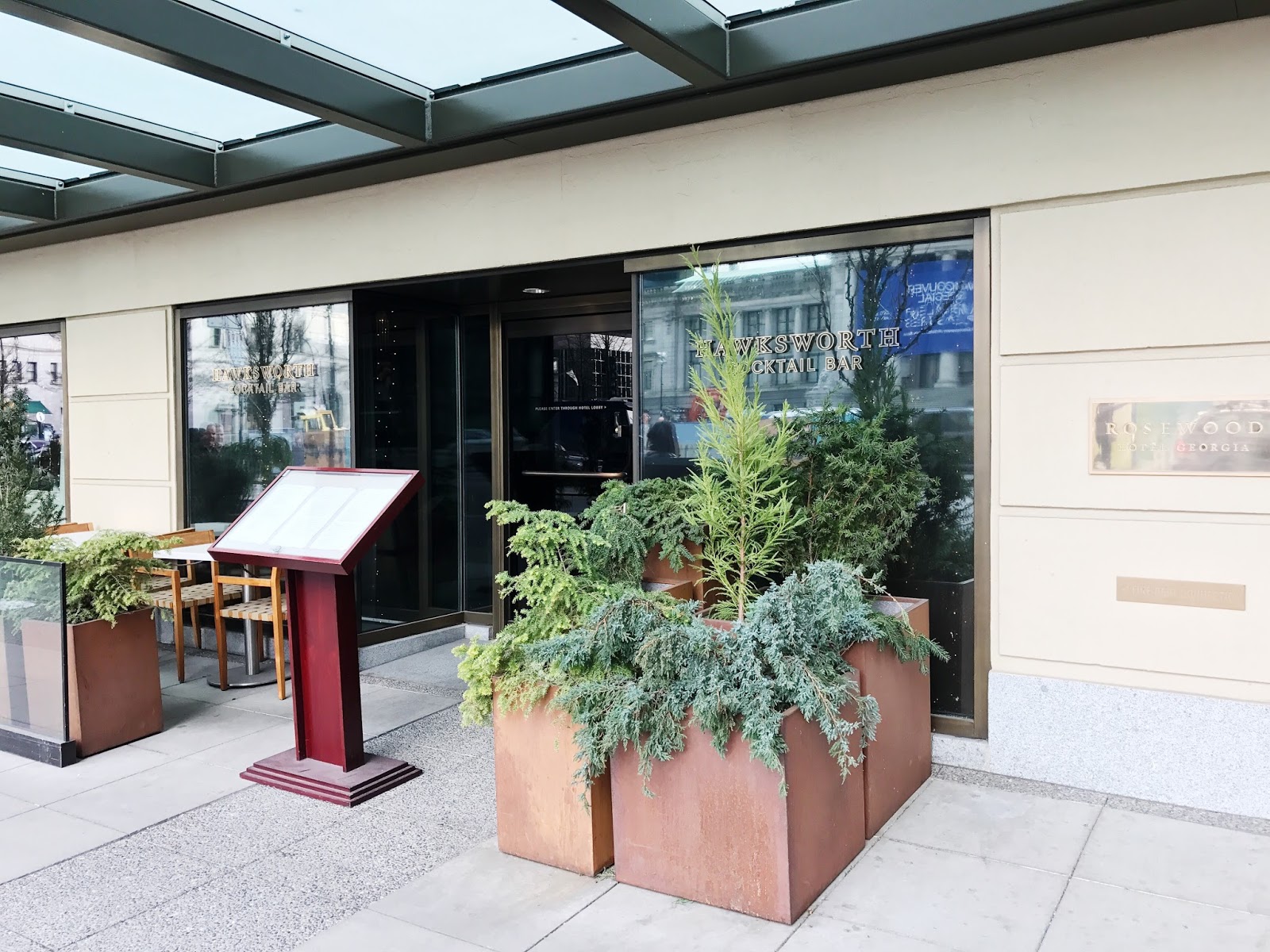 The past few weeks have been CHAOTIC. CHAOTIC I TELL YA.

1. I MOVED TO KITS!! KIT-SI-LAN-OOOO. I'm still in a stupored haze...I ain't in Burnaby no more! (The fact that I live a stone's throw away from Whole Foods doesn't hurt either. Yea, catch me there 6 out of 7 days a week. Sometimes twice a day even.) I'll delve into all the details (how I found my roommate, moving in, the transition process, etc, in an upcoming blog post!)

2. Finals on finals on finals on finals. Yes, that's 4 finals in a week. INSANITY I TELL YA. ɪnˈsanəti (why yes, I think the situation calls for a phonetic translation.)
3. All the birthday festivities this past weekend. (If you've been keeping up with my insta stories, you'll know what went down.) I celebrated my inaugural 21st birthday with treats, sweets, and eats galore, and what a birthday celebration it was. No better way to ring in my 21st year then with a whiff of independence (in the form of being on my own for the first time...ever!)

4. I'm leaving for Cancun in a matter of...2 days!! That's right, on Wednesday I'll be jetting off to Edmonton, where I'll be subsequently boarding a flight to Playa Del Carmen! Catcha later, Snowcouver.


In case you missed it, here's a lowdown of what went down in my life on the 17th of December!

Being that my birthday fell on a Saturday, it only seemed appropriate to continue with our traditionary weekend brunch! We were originally planning to do lunch at Hawksworth, but their lunch service is limited to weekdays!

Jeremy pre-ordered a gluten-free and vegan donut cake from Cartems Donuterie (the boy did good) which we gluttonously devoured post-Hawksworth. (Hawksworth sized portions do not a full belly make.) I was expecting an actual cake-sized donut, but it was more of a donut shaped cake really (or a cake shaped into an "aspirational" donut rather)...which I was ALL for, it would've tasted bomb either way! He also got the staff at Cartems to chorus in an awkwardly rehearsed (okay it wasn't rehearsed at all) round of Happy Birthday (hey, they tried.)

Going to Cartems post-brunch has become somewhat of a tradition for us...in fact, we allot our calories for that sole purpose (the amount of donuts we consume is highly dependent on our satiety levels...two each is usually enough to suffice.)

After polishing off half of the cake between the two of us, we headed to Holts Cafe to redeem my (too good to pass up) birthday dessert! Because at that point, more sugar was exactly what our hyped up selves needed! 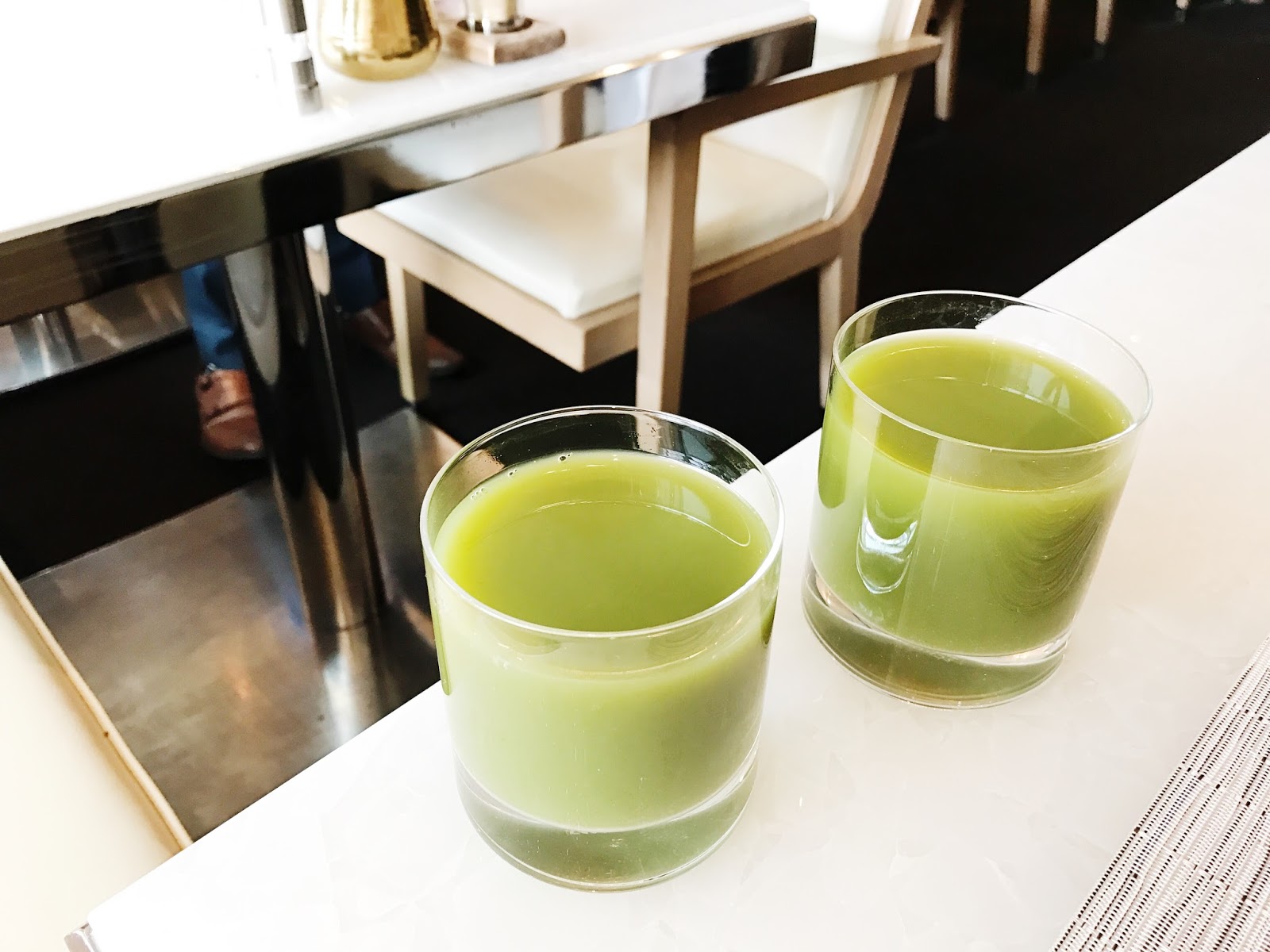 Organic, Cold Pressed Juice of the Day from Nectar! $7 Each
4.5/5 stars

Ever since I was cleared for Oral Allgery Syndrome, Nectar Juicery has been on my to-try list (given that their juices are 100% organic!) I even ventured out to their W Hastings storefront, but much to my dismay, they were closed that day. On many a cold day I've passed by their mobile truck after a shopping sesh at Topshop (they seem to be parked out there on a daily basis.)

Being that I had just completed my last final a day prior, a cold pressed juice seemed well deserved. To that, we promptly ordered a glass each. I was secretly hoping that they would come in one of Nectar's pristinely packaged glass bottles, but alas, they did not.

The waitress didn't clarify which "flavour" it was, but a sharp ginger essence was noted upon consumption. We could also detect what tasted like parsley and swiss chard, which lead us to suspect that this was their signature "Devotion" drink, which consists of "cucumber, celery, green apple, swiss chard, parsley, lemon and ginger." 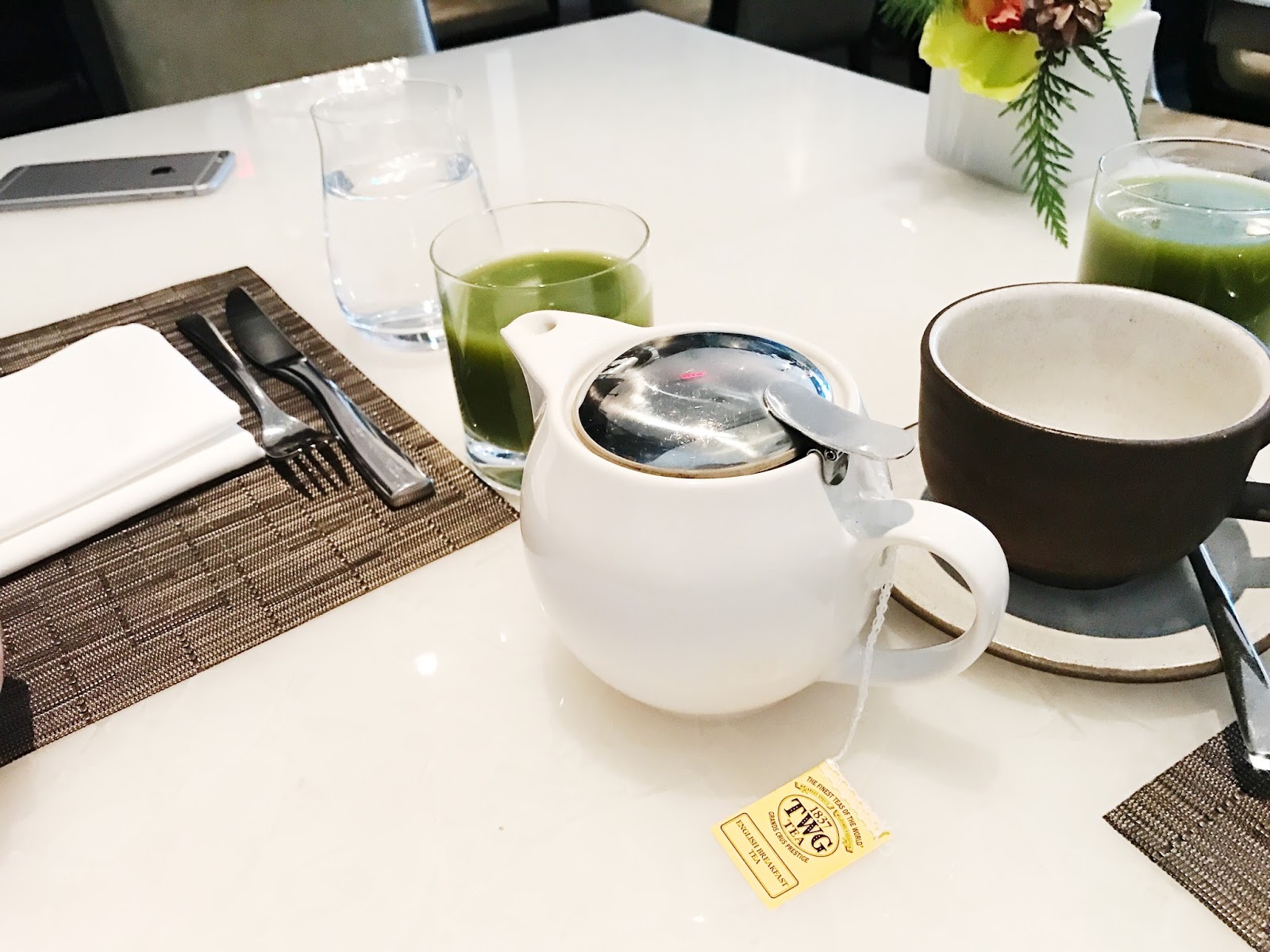 Given that I'm an avid drinker (or sniffer rather) of TWG (hey, I have yet to get my hands on equipment deemed fit to brew TWG...that may soon change though, given that they just opened up a flagship store in Vancouver) a cup or two seemed warranted on my birthday!

Much to our dismay, the TWG came in tea bag form; we were expecting it to be loose-leaf (tea bags equate to lower quality.) Nonetheless, the scent was divine. I followed up my cold pressed juice with this, so perhaps the sharpness of the juice overpowered the delicate notes of the tea (I couldn't pick up much of the English Breakfast flavour!) 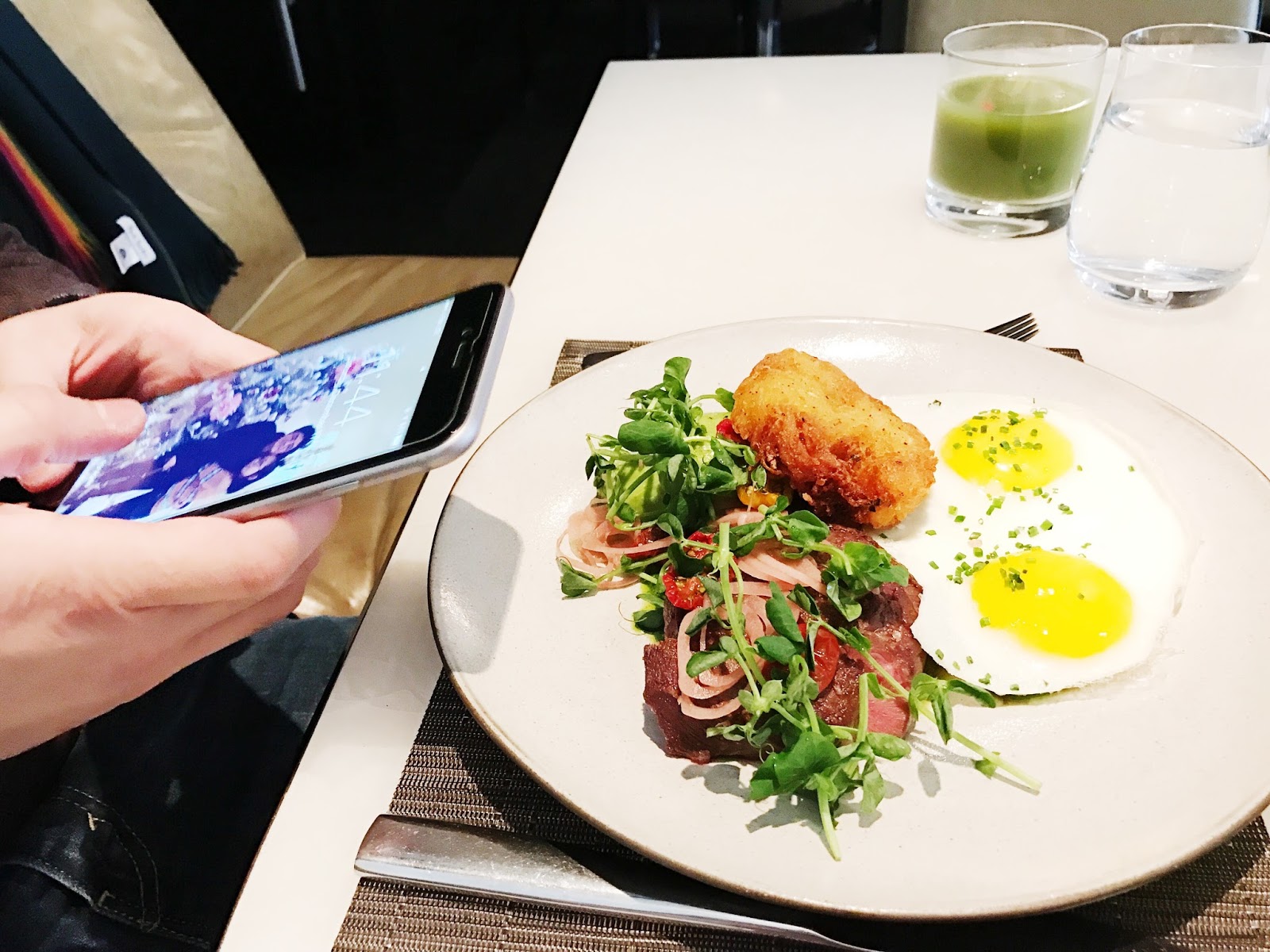 Jeremy's on a steak kick (who am I kidding, he's always on a steak kick...he eats steak several times a week!) The steak was rendered a beautiful medium (as requested) and exhibited a robust potency. The avocado imparted a vivid creaminess to the otherwise hefty steak. The eggs were ridiculously clean, no jarred edges or overdone yolk to speak of. The rosti was similarly well done, and was a nice way to round off an exceptionally palatable breakfast! 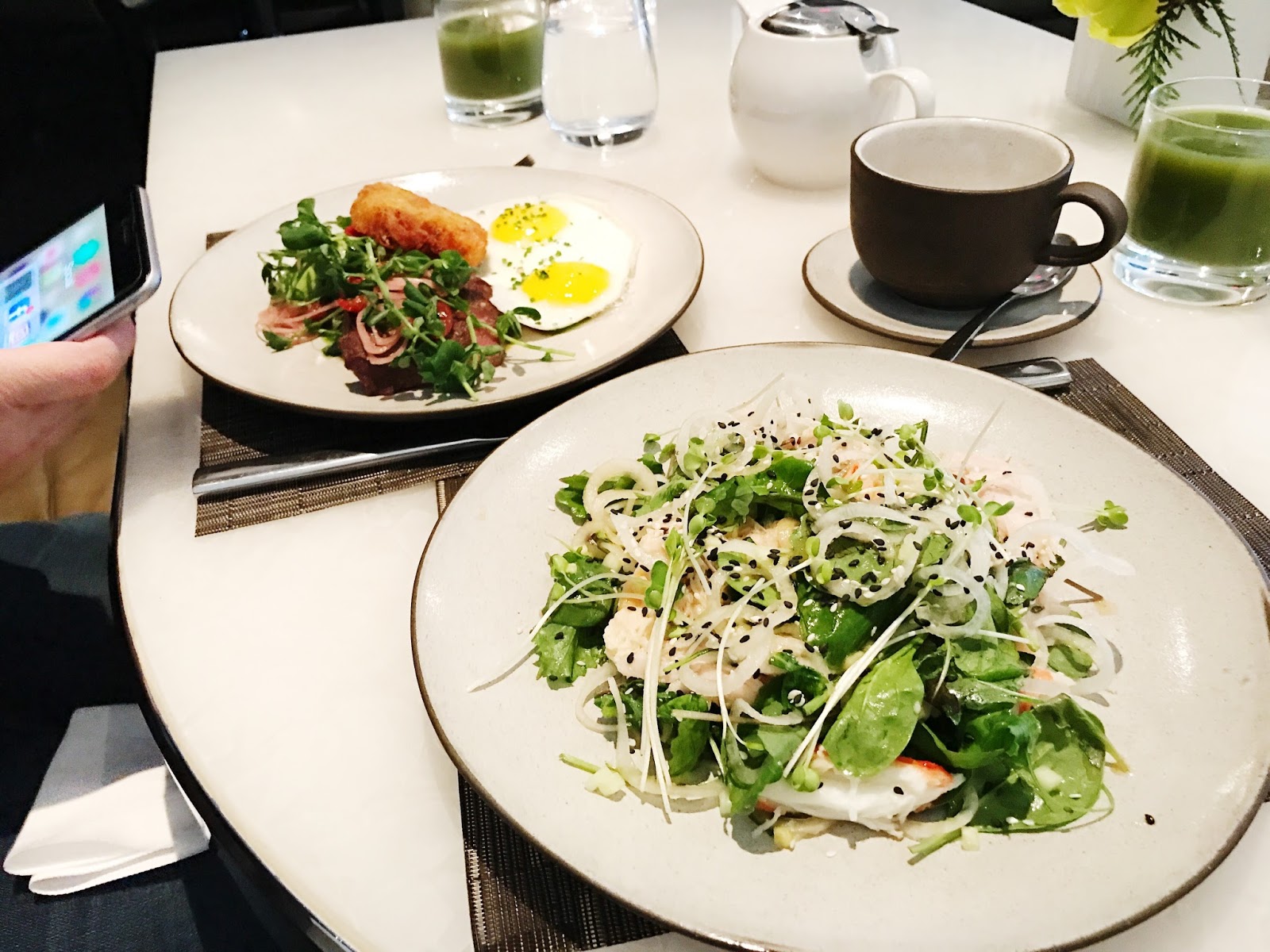 The subtly of this dish was exquisite! I was particularly impressed by how remarkably flavourful the salad was without being overbearing. The wisp of yuzu was especially alluring. They were surprisingly generous with the crab, I was expecting shrivels, but they were definitely heavy handed in the seafood department! Expectingly priced at $30 (as it included king crab) this was well worth the price tag! 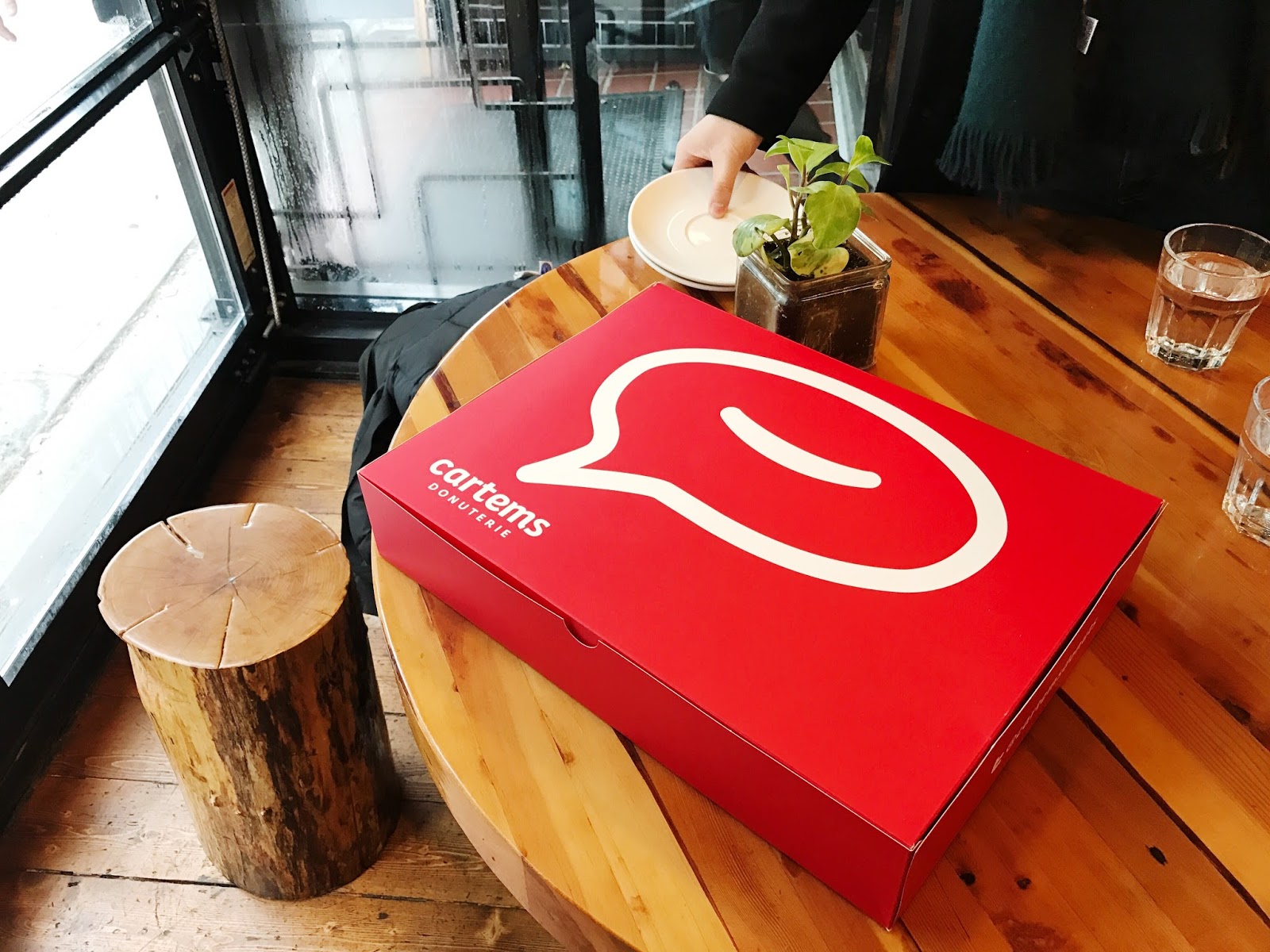 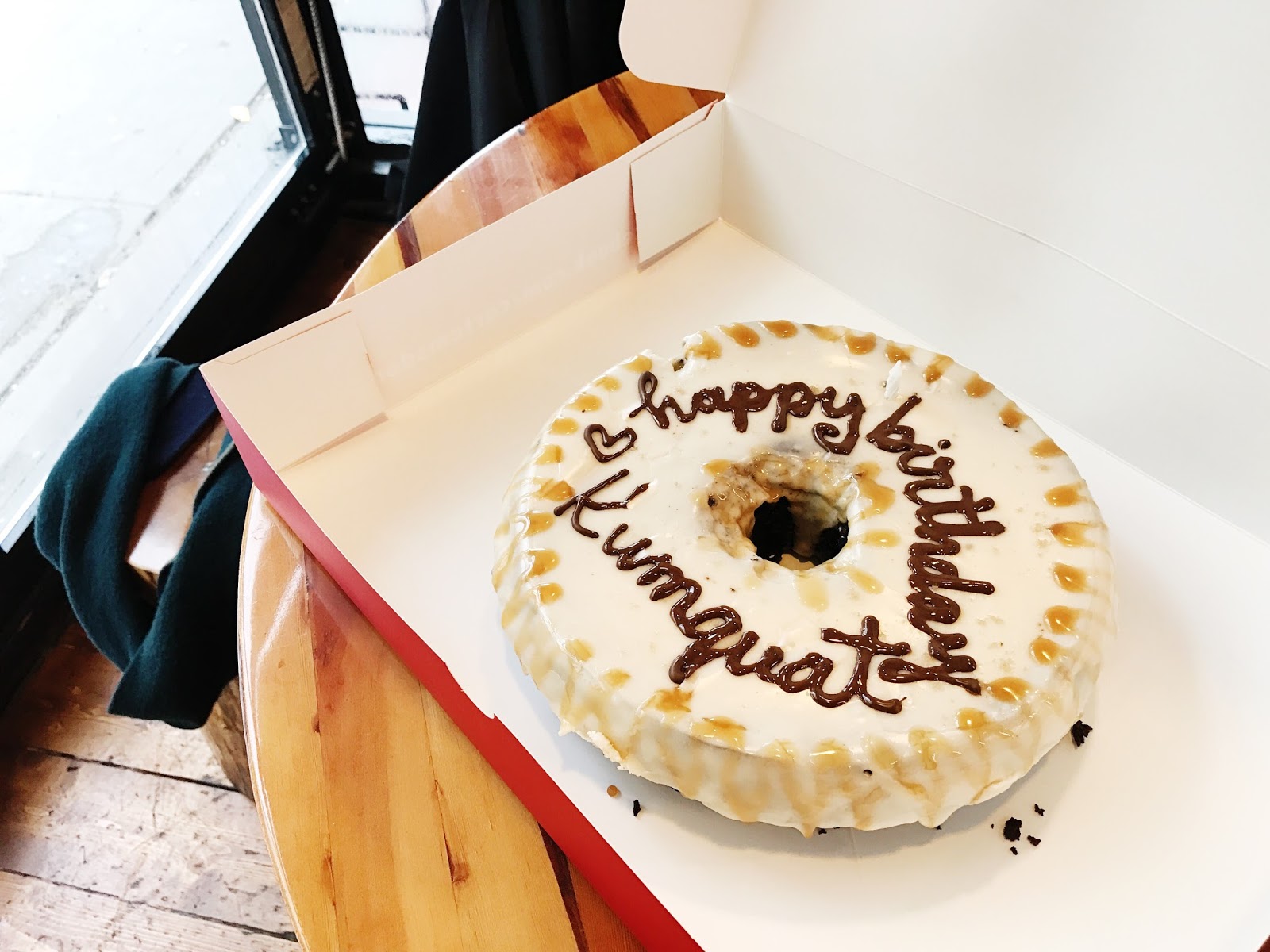 As with all of Cartem's gluten-free treats, this did NOT disappoint. Cartems does gluten-free, RIGHT. In no way is Cartems ever dry, chalky or stale-tasting, and this cake was no exception. The frosting was particularly delectable, even more so than the frosting on their usual donuts. The chocolate base was immensely rich, with the glaze being intensely salted caramel flavoured. The moistness was quite impressive, it tasted like it was made out of wheat all right, but it wasn't! 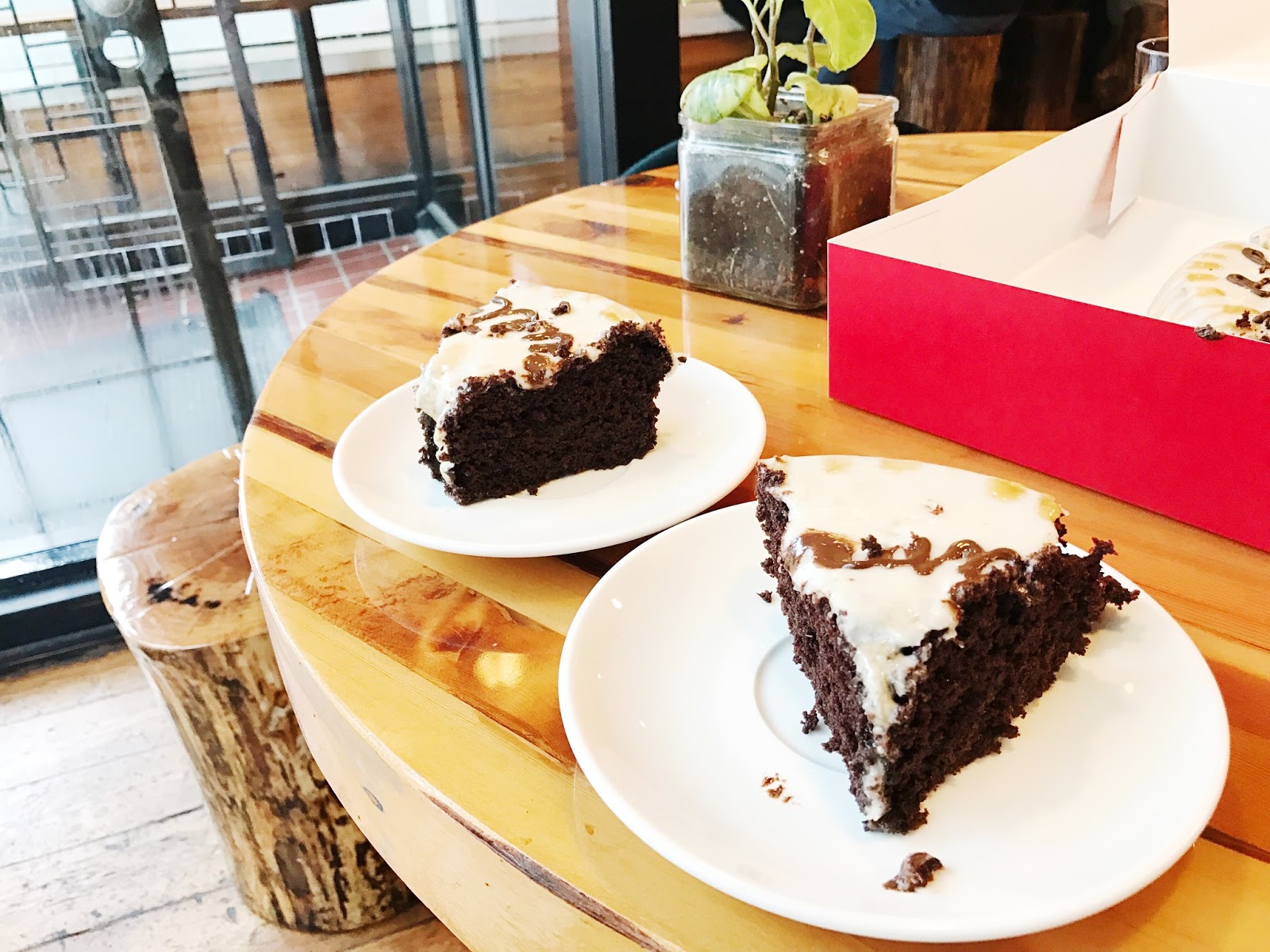 We demolished half of the cake; a quarter each! 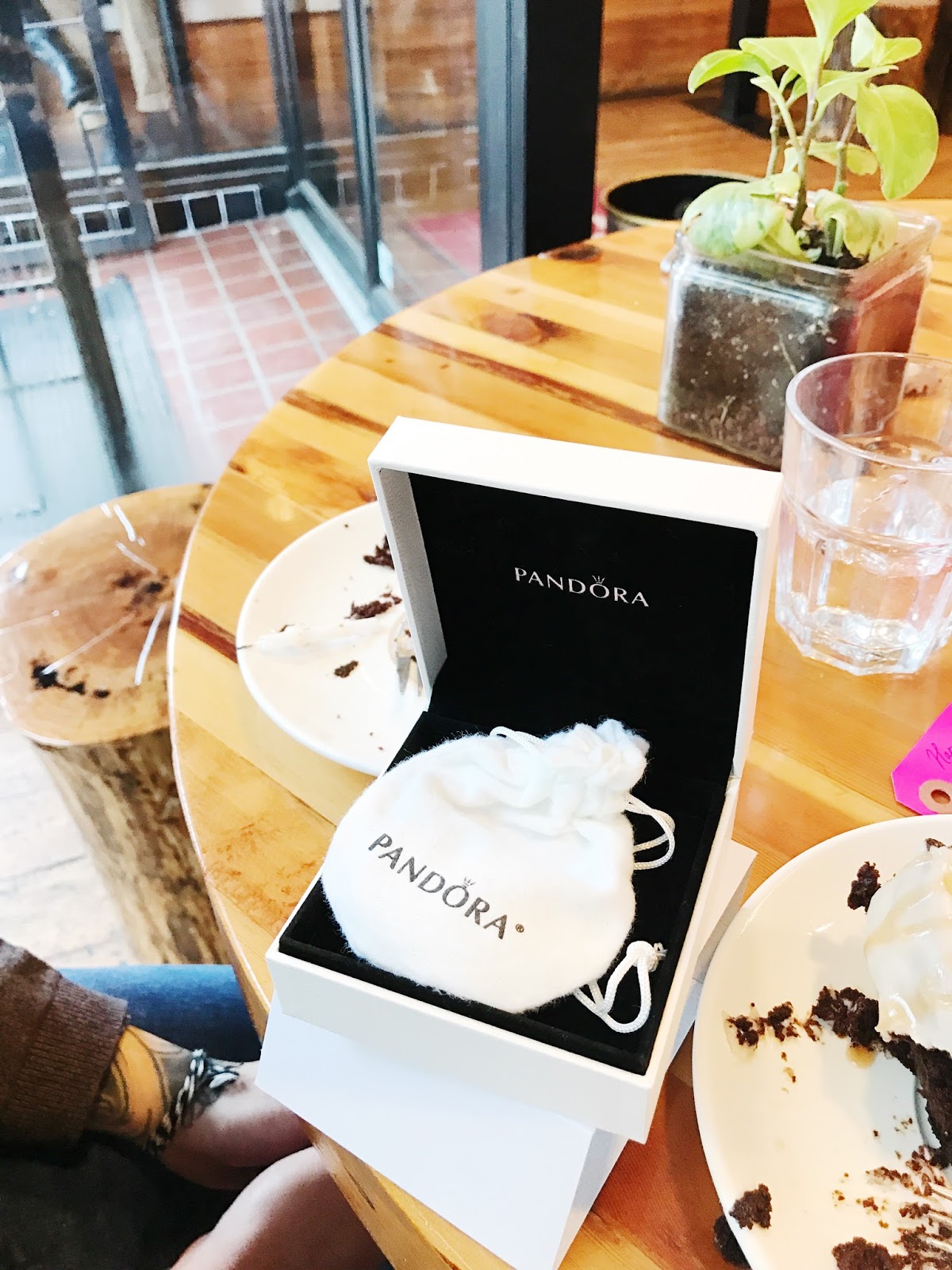 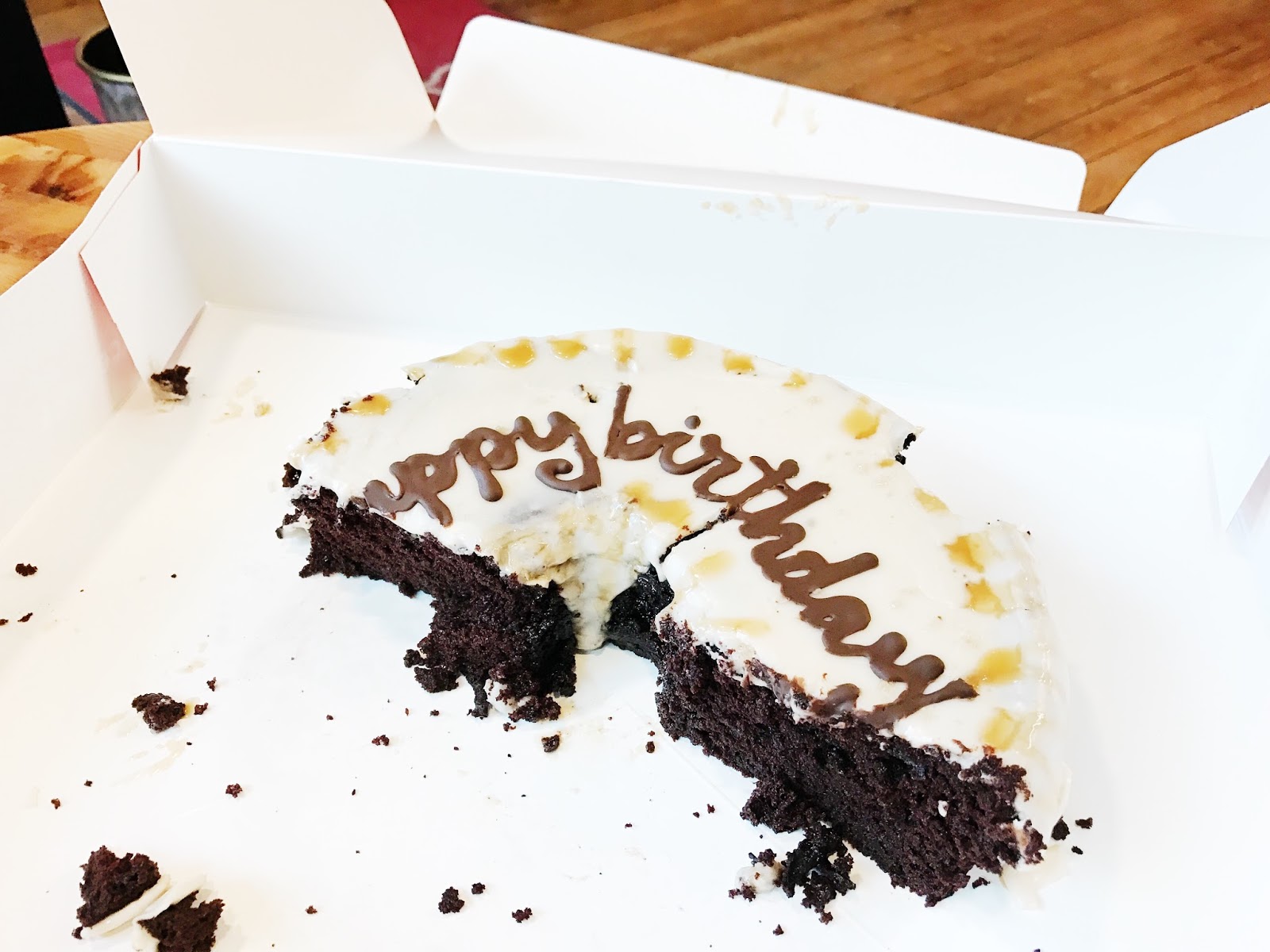 The aftermath. When a donut cake and Vancity Noms cross paths. 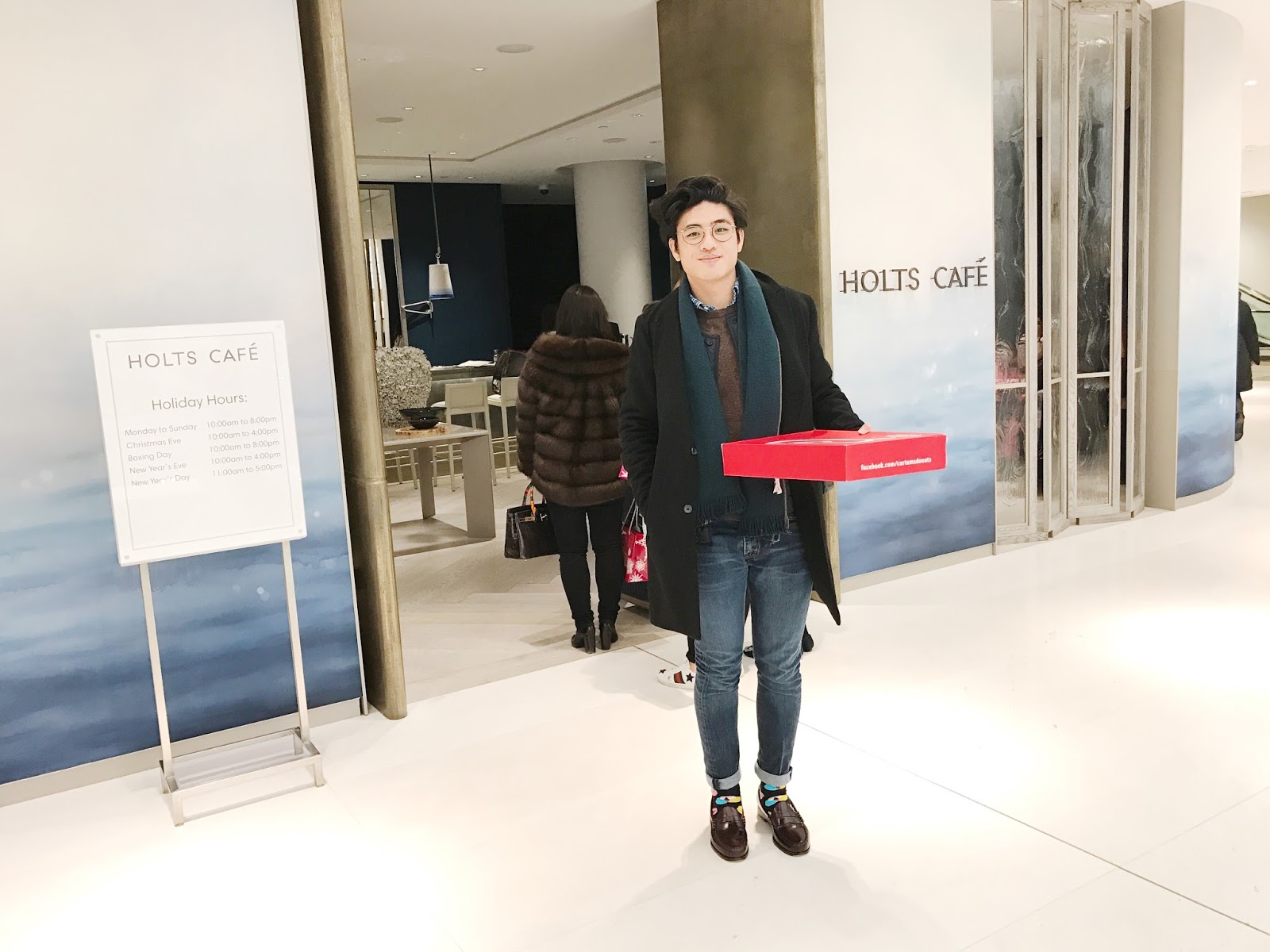 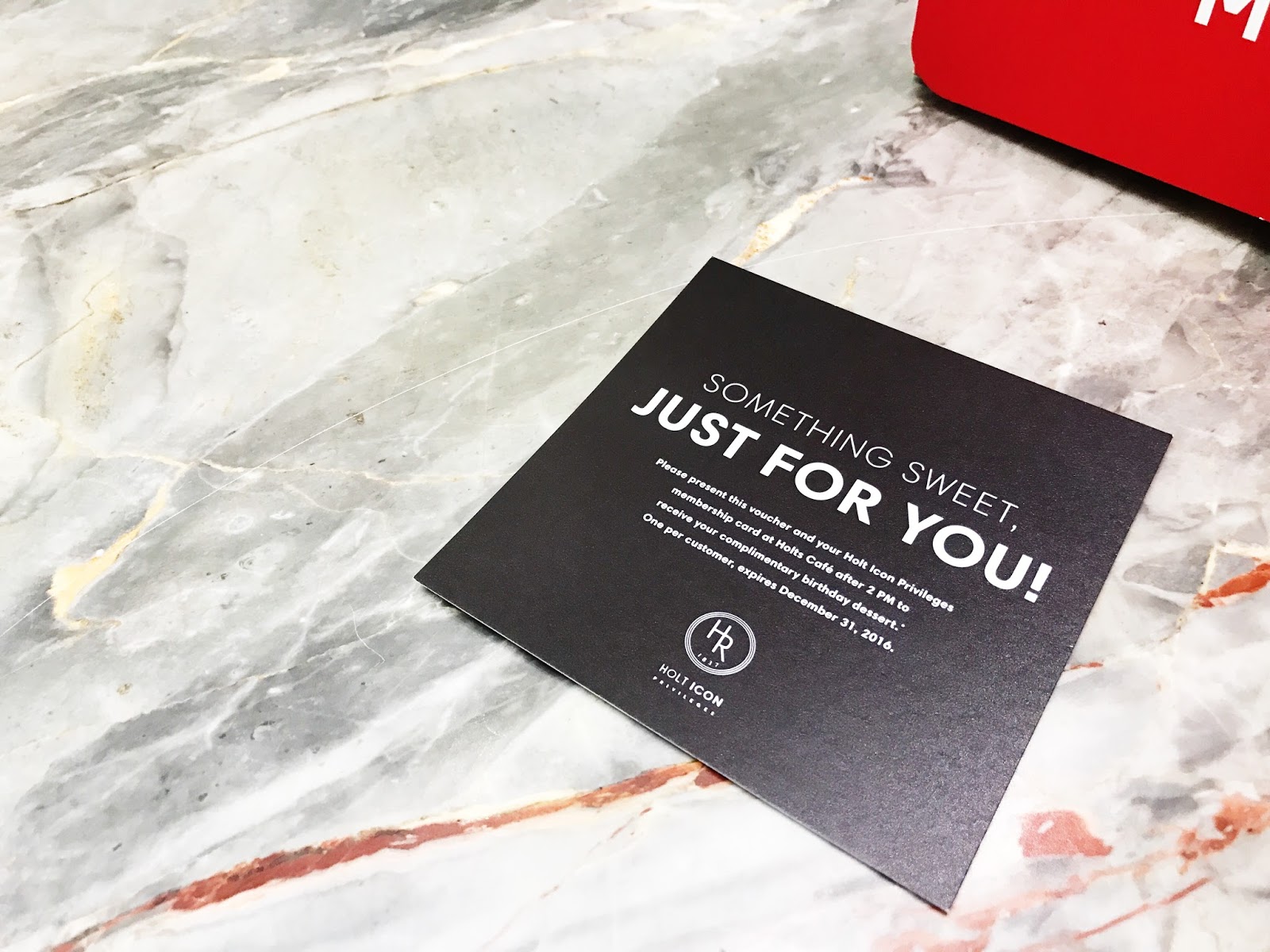 If you're a Holt Icon member, you can redeem a complimentary dessert at Holts Cafe on your birthday! (Just pick up this card at the concierge!) Dang, free never tasted so good! Move over Red Robin's, we ain't coming for your free birthday burger no more!

The mousse was straight up dark chocolate, and exceptionally rich as a result. The raspberry sorbet was a great tonal contrast to the otherwise heavy ingredients. With some beautifully shaved coconut flakes to top it all off! 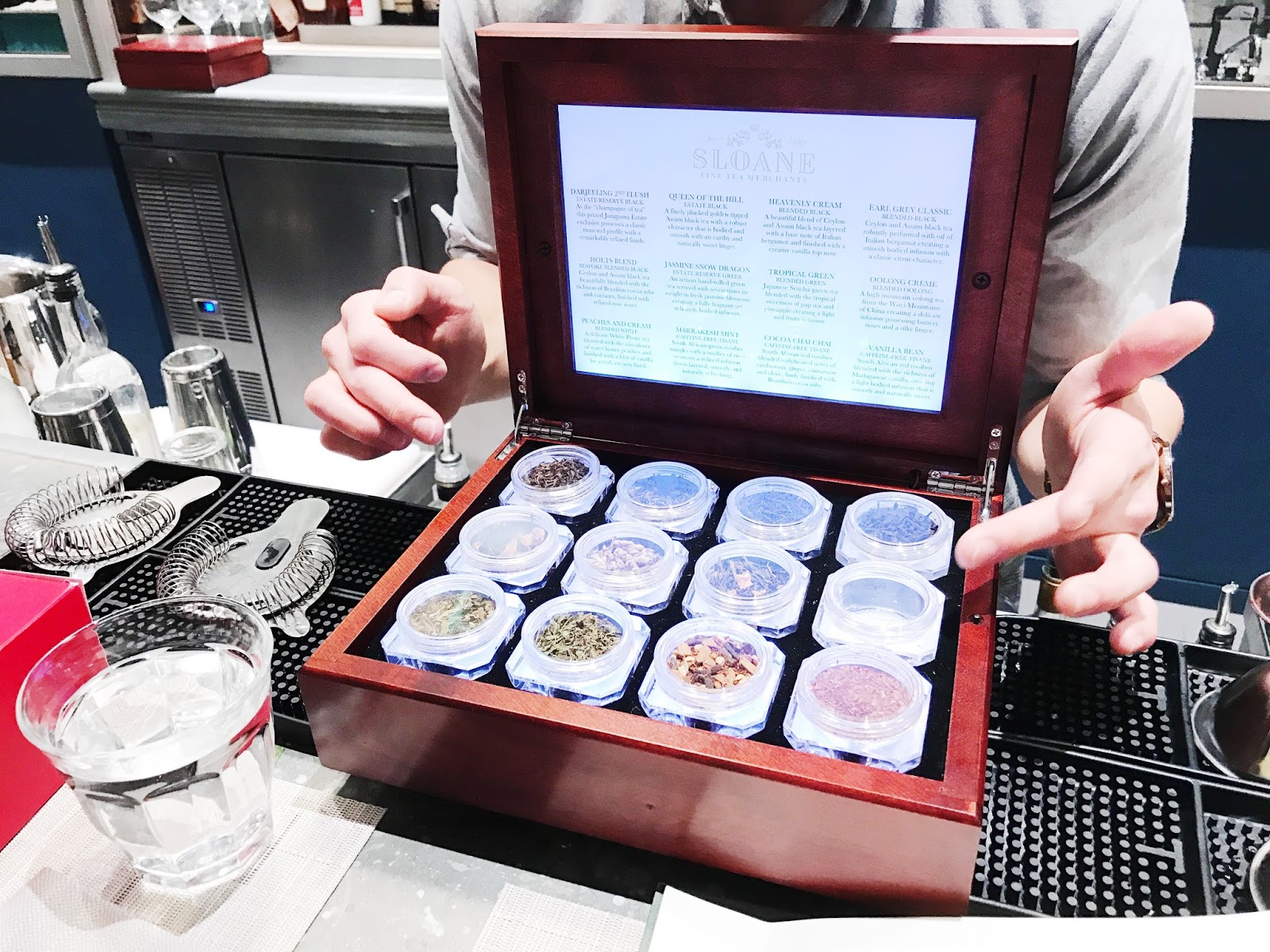 Getting on that Sloane train! 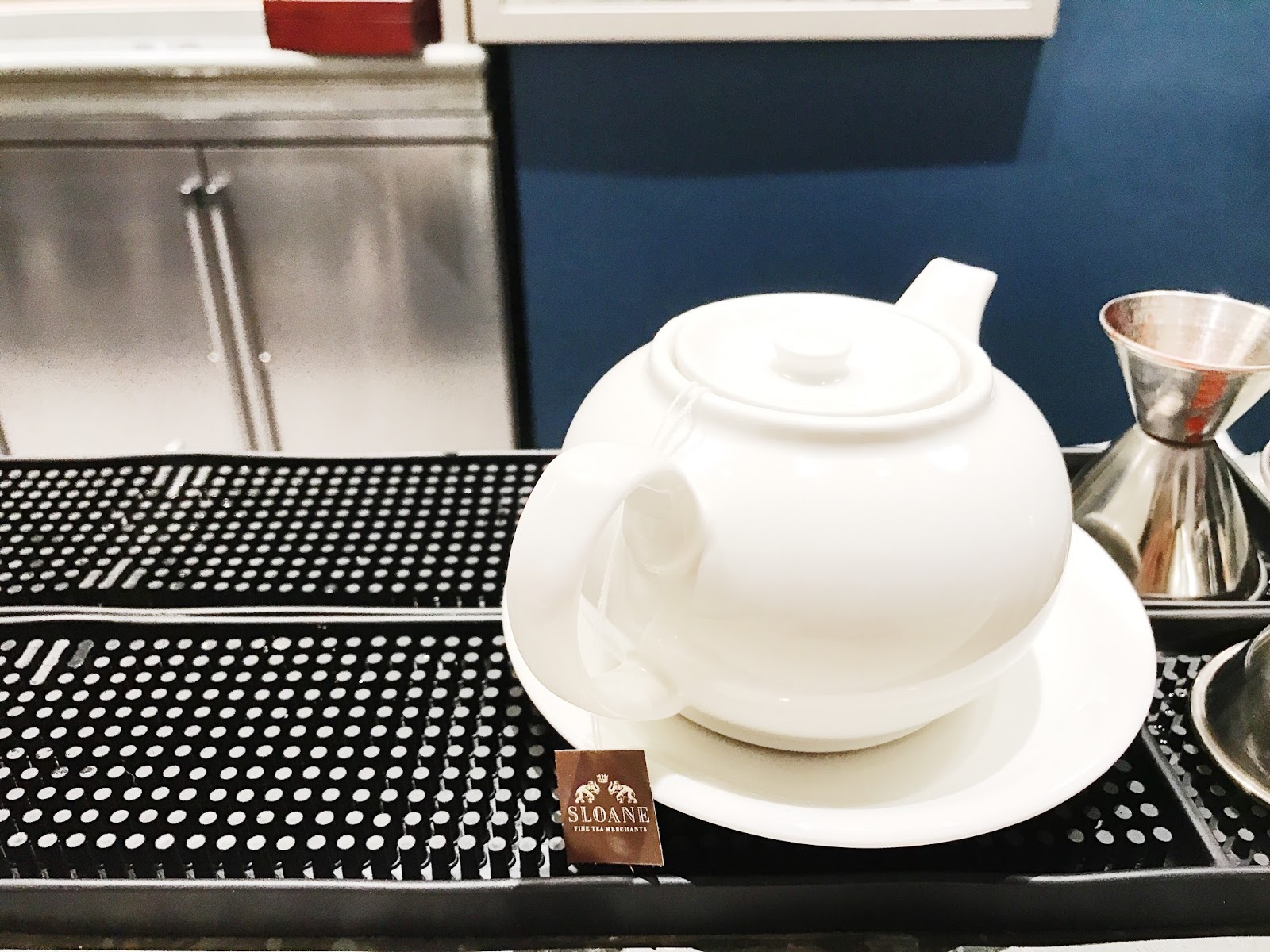 Sloane Vanilla Bean $4
(Because we didn't want to be leechers...although I'm kind of a tissue leecher to begin with. Thanks, Starbucks.)

Reasonably priced at $4, we ordered a Sloane tea to pair with our dessert! Suffice to say, I enjoyed this more than the TWG we had at Hawksworth. I was particularly impressed by the abounding sweetness from the vanilla (without the use of added sugar.) 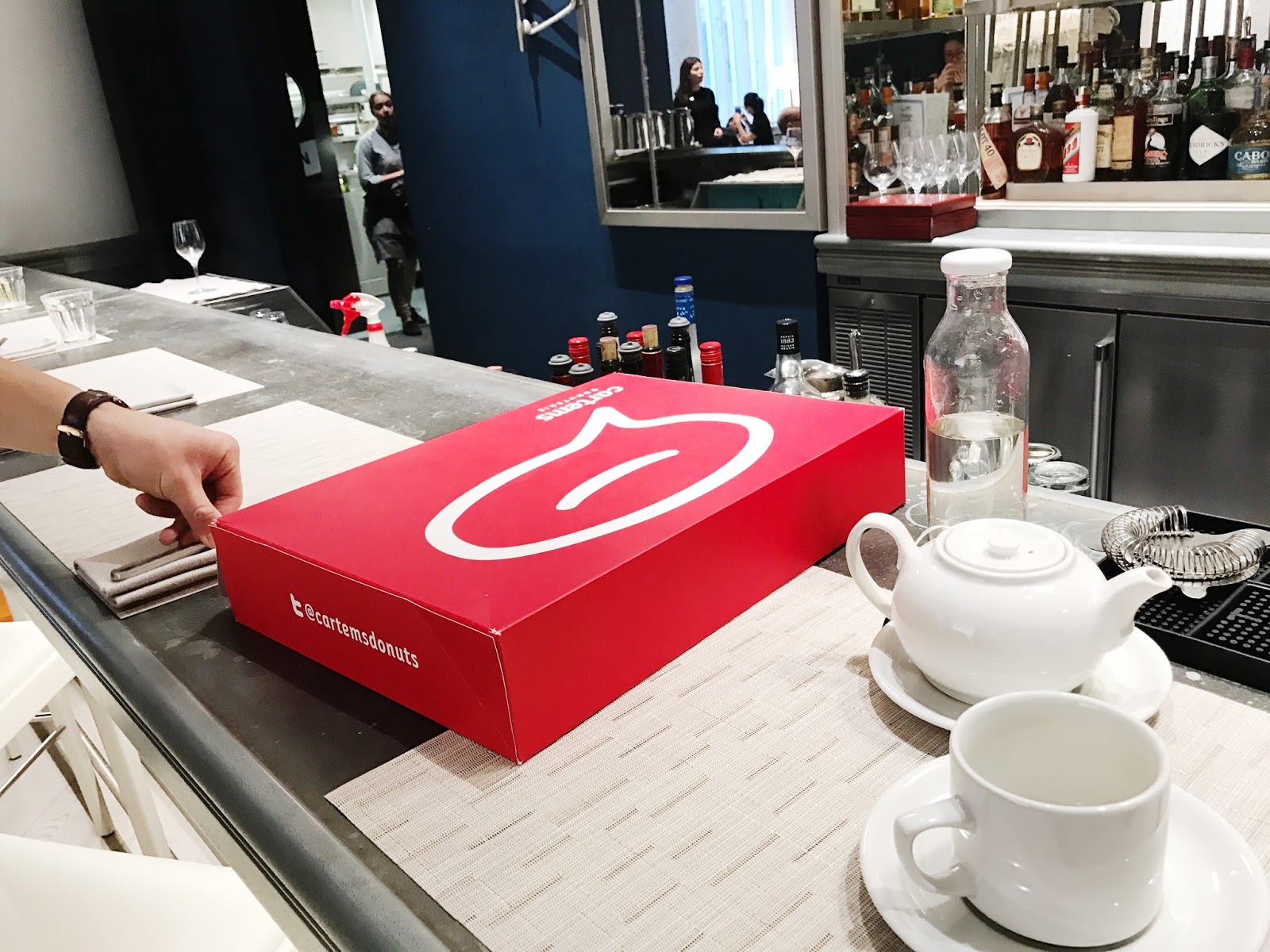 Everyone was oogling our Cartems box, and inquiring about whether or not those donuts were for them (HA, in their dreams!) 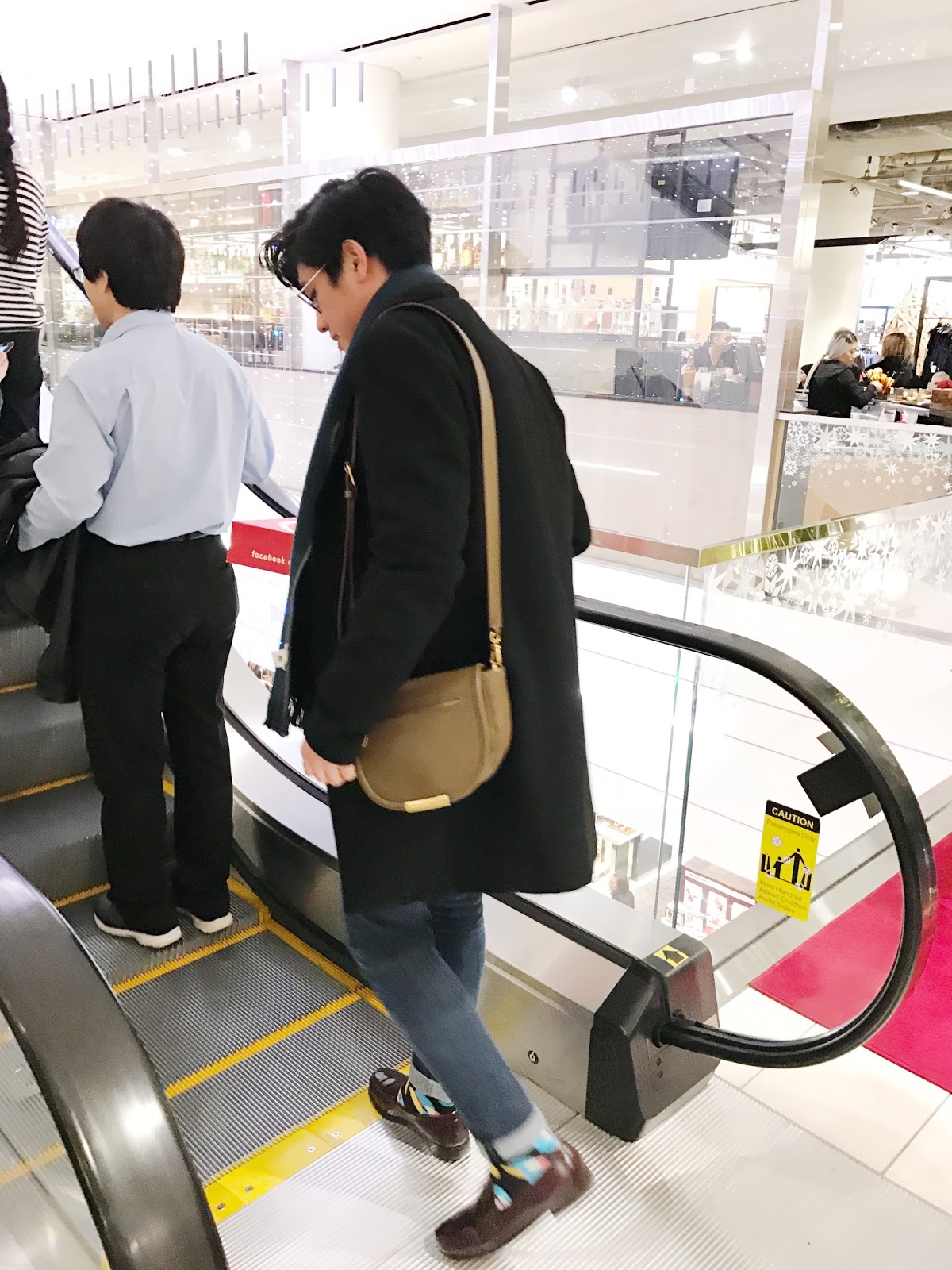 My bag goes exceptionally well with Jeremy's outfit, dontcha think? (I think it could pass as his MURSE.) 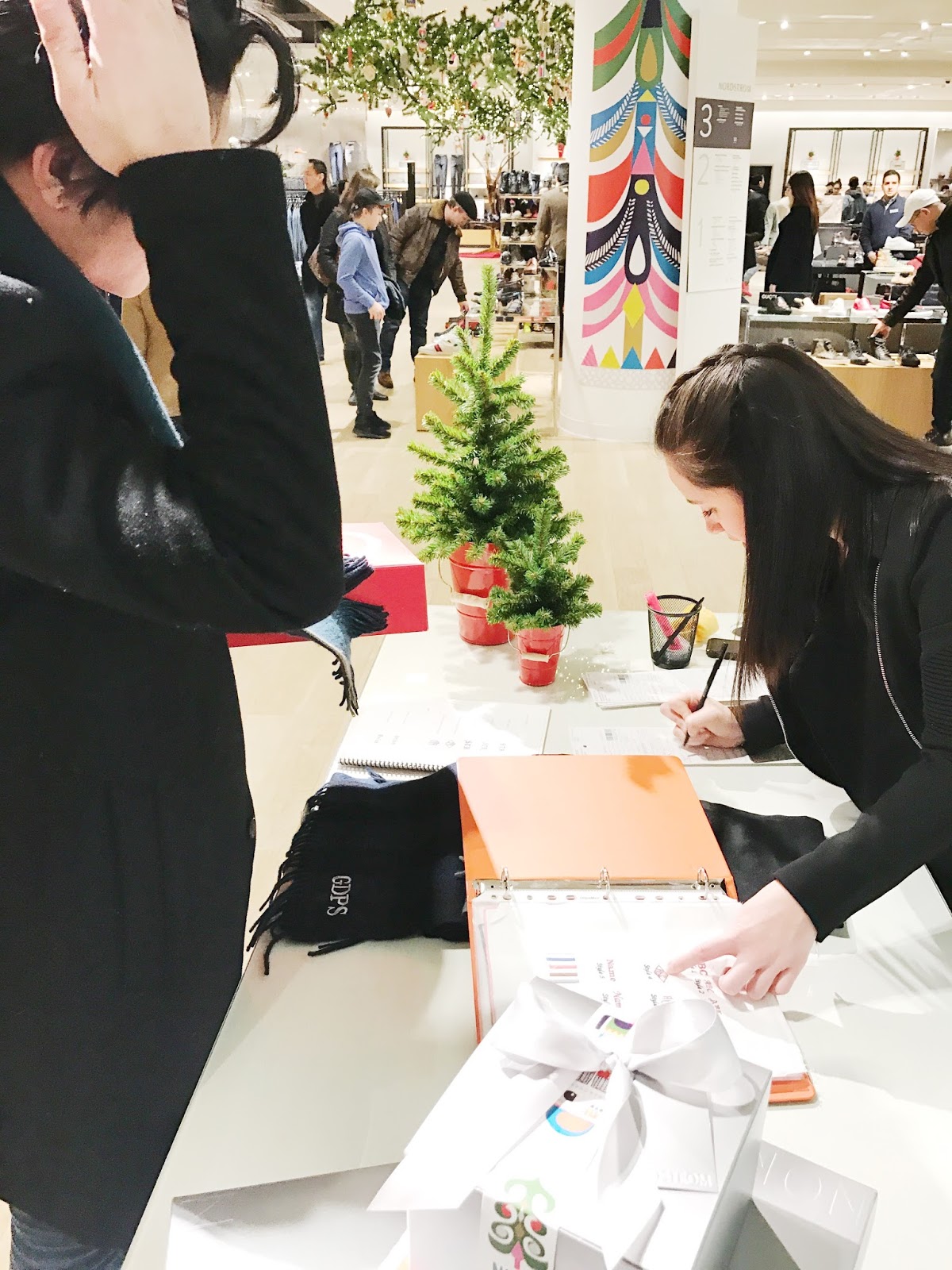 Spontaneity at its finest; Jeremy getting his scarf monogrammed at Nordstrom! 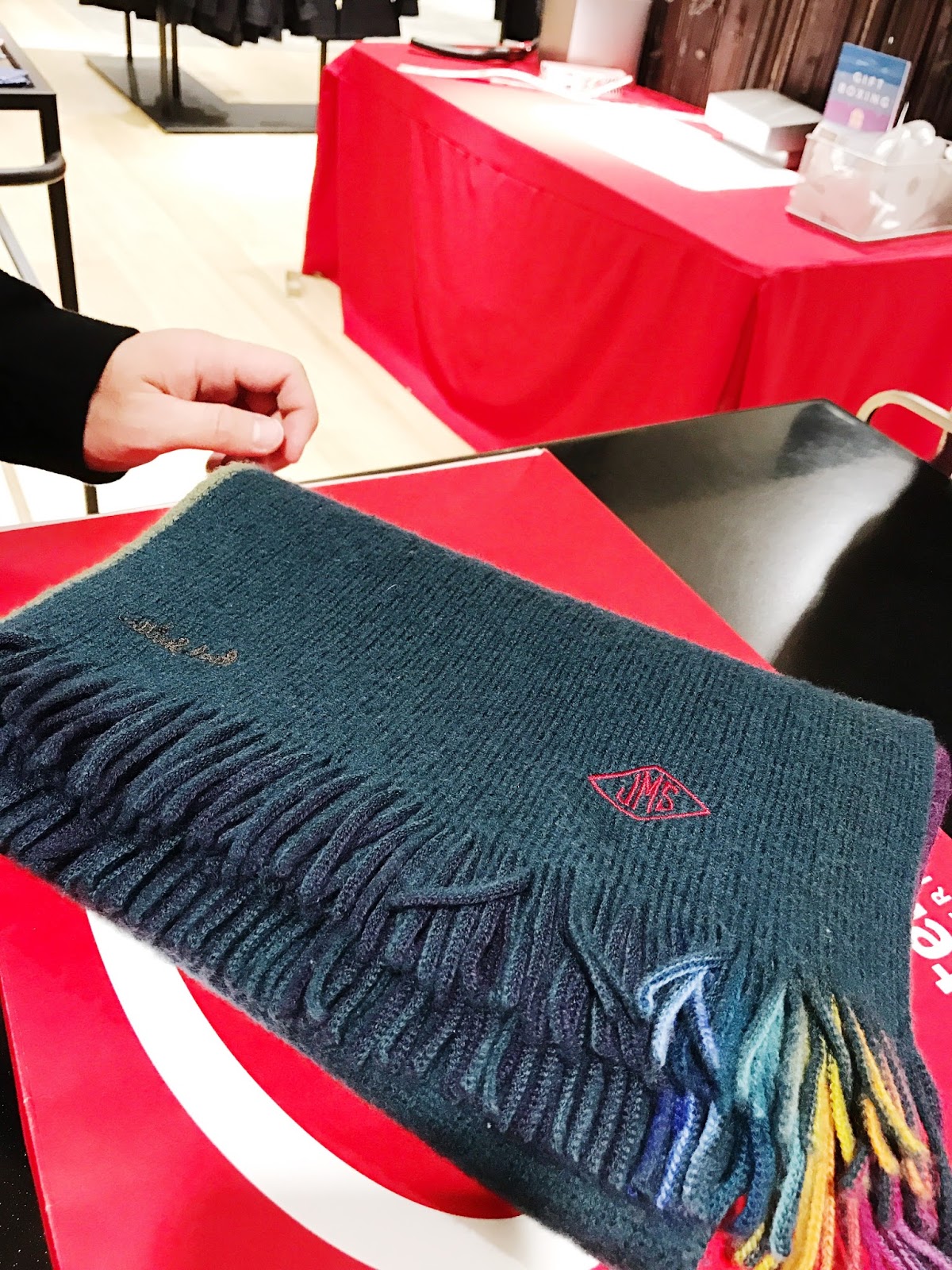 Not too shabby I must say...now I want a monogrammed scarf! 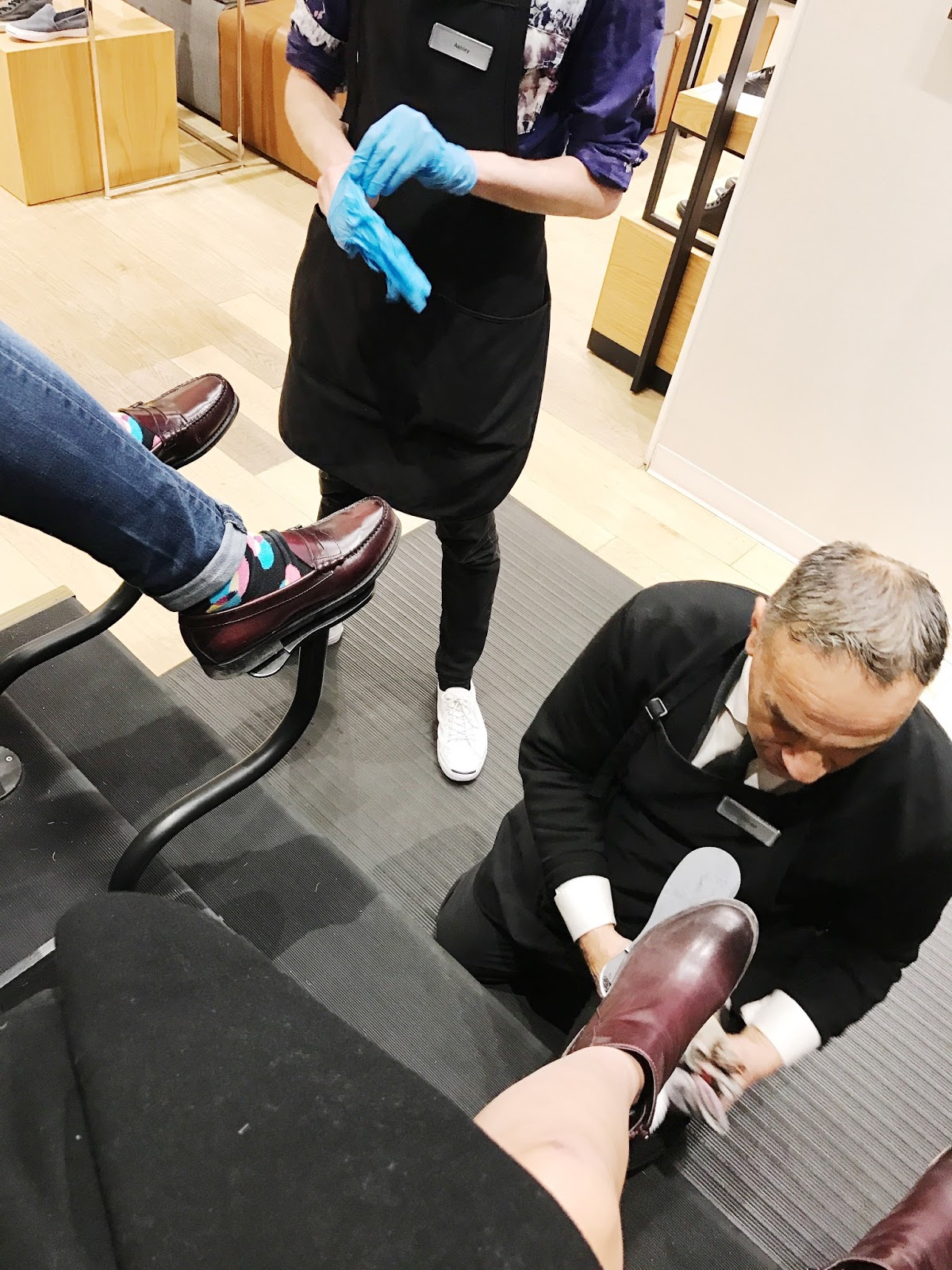 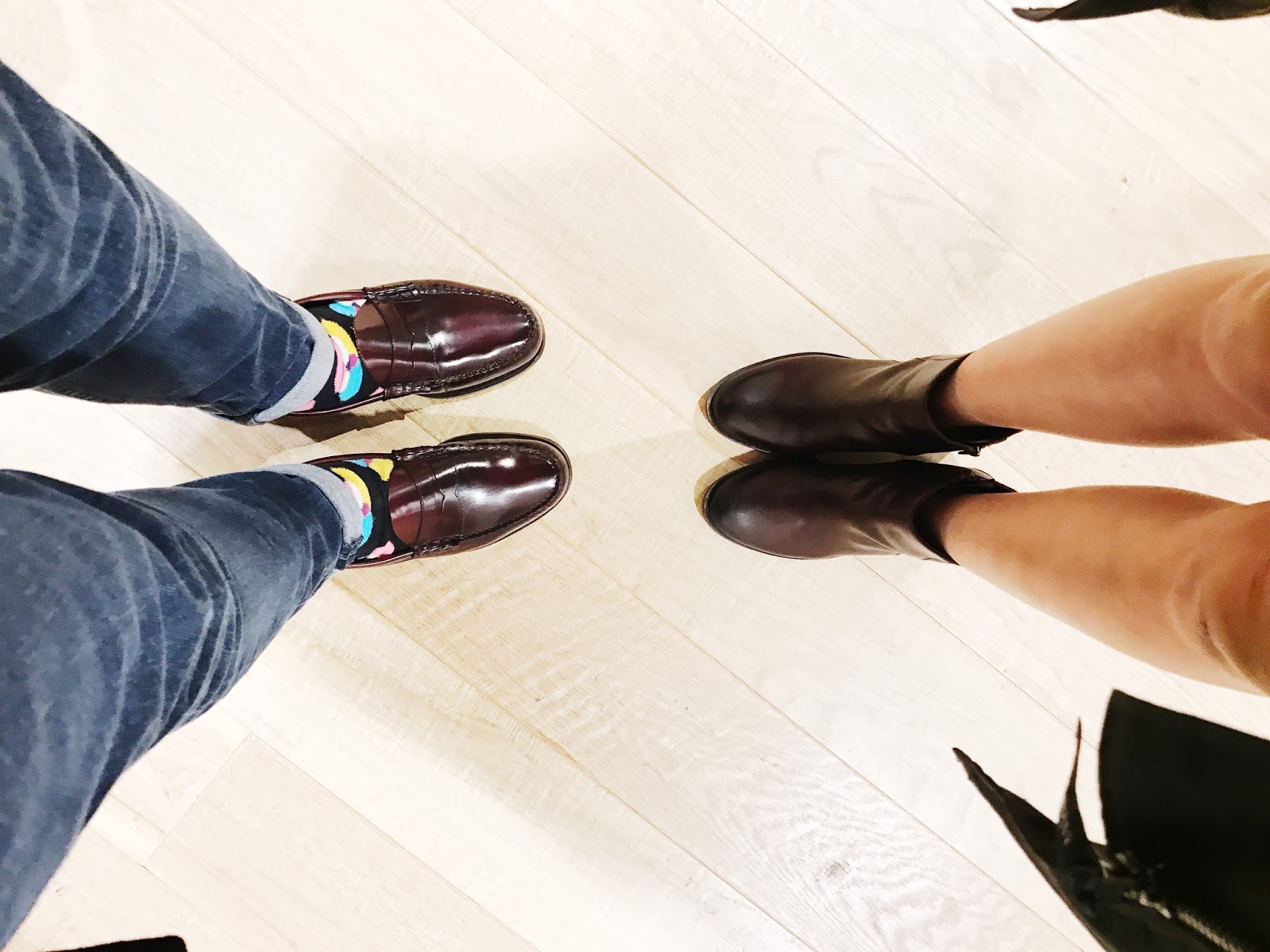 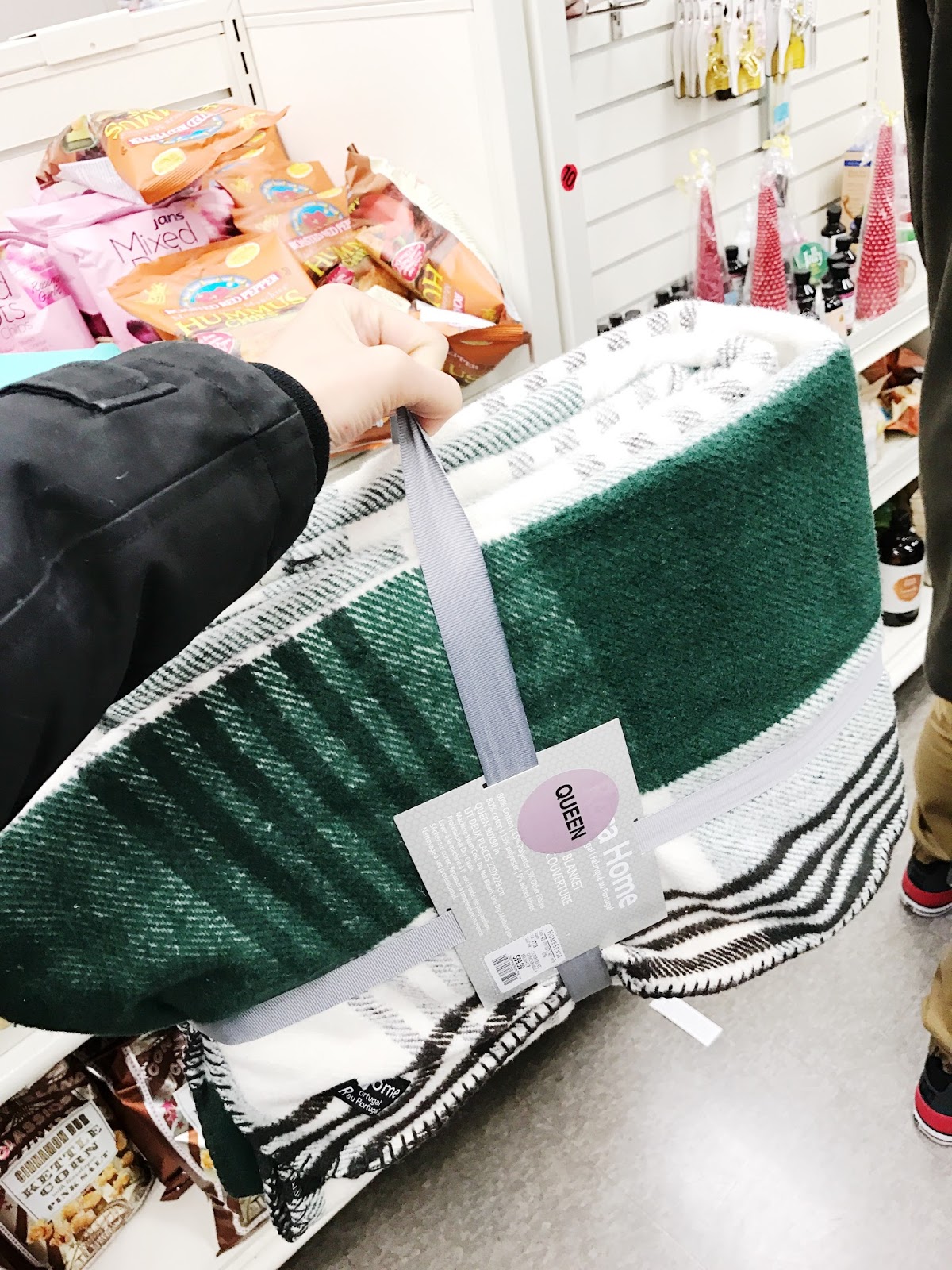 Picking up some cozies from Winners; forest green plaid! 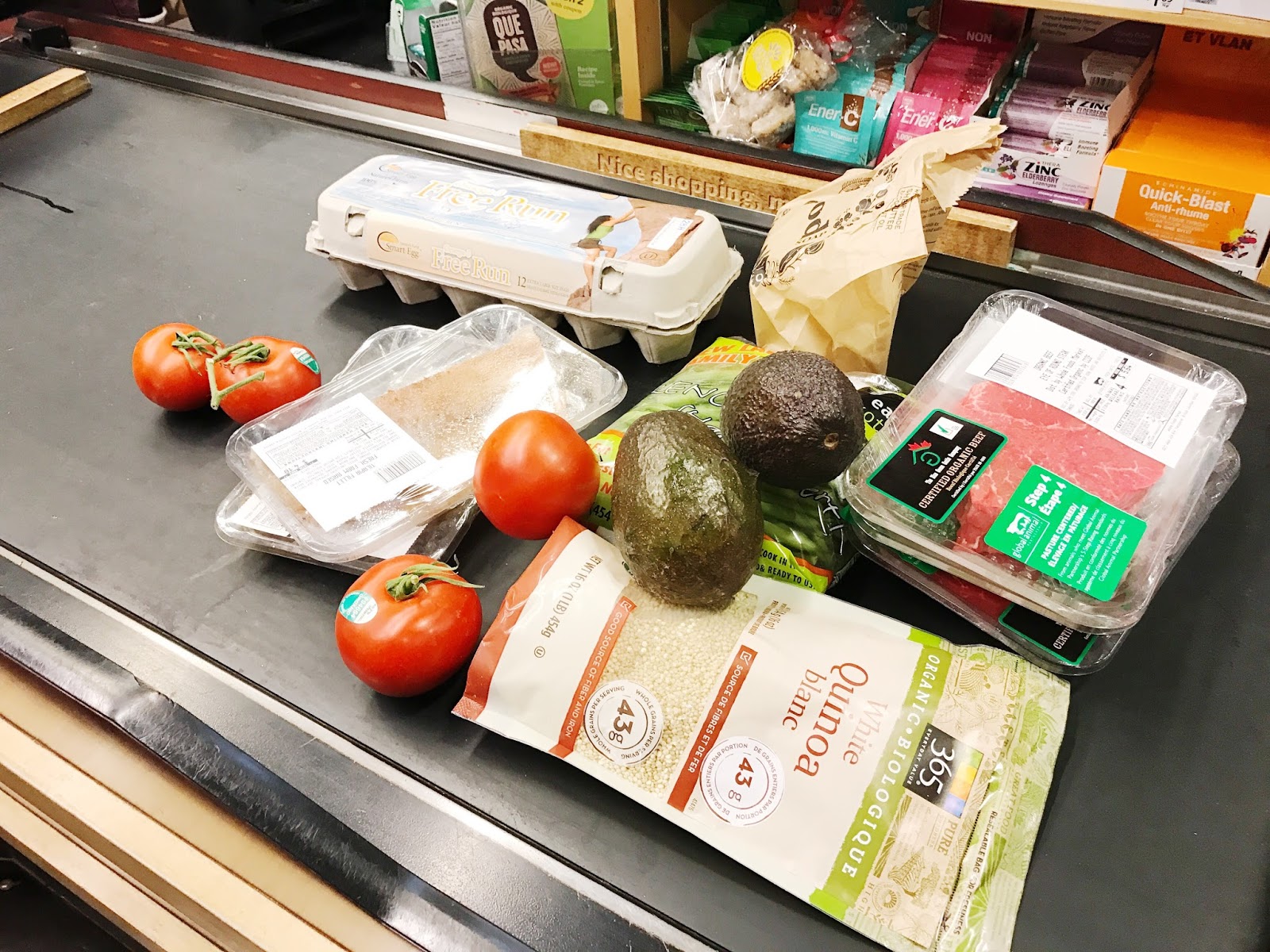 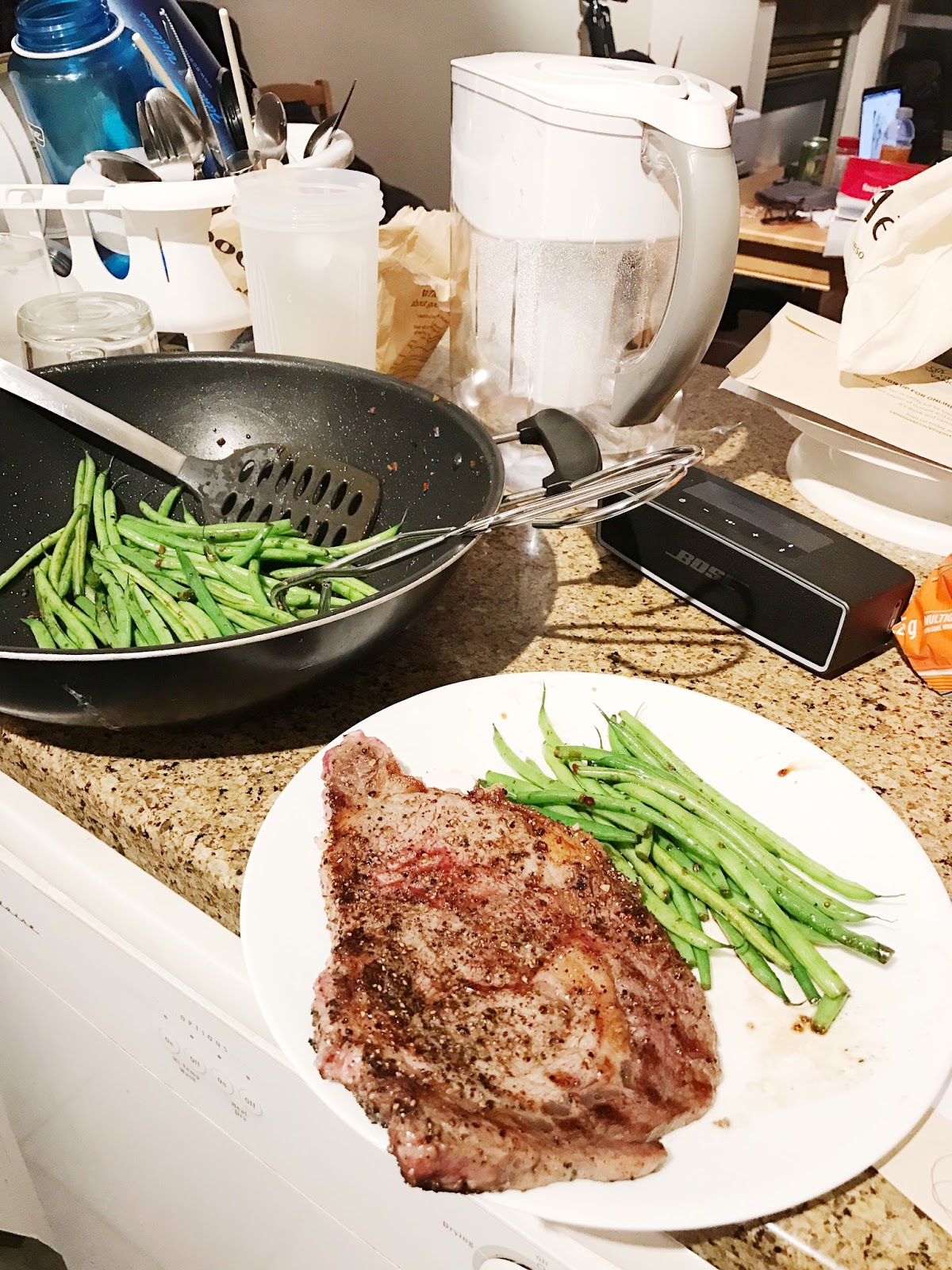 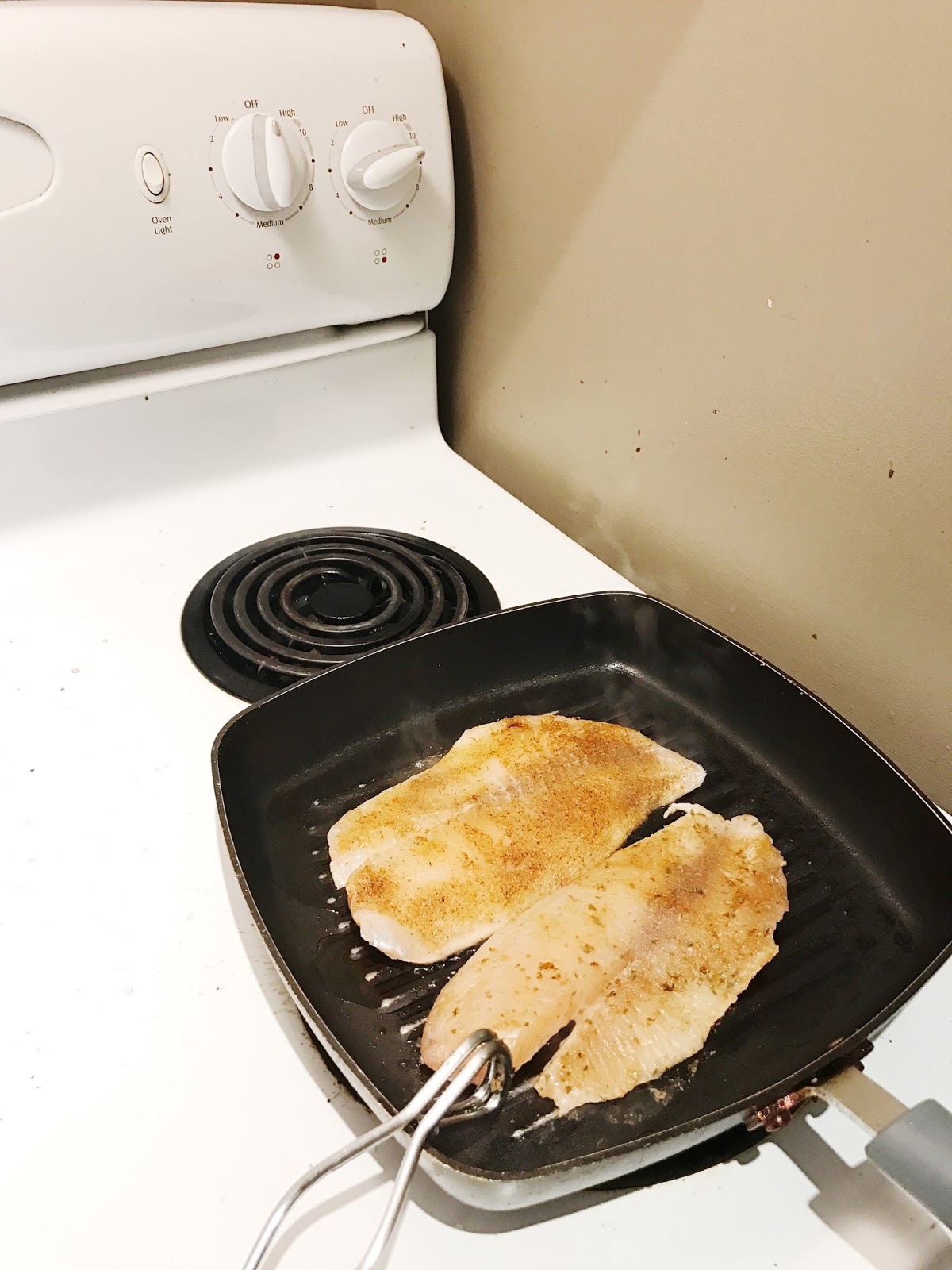 Seasoned tilapia from WF to end the night!