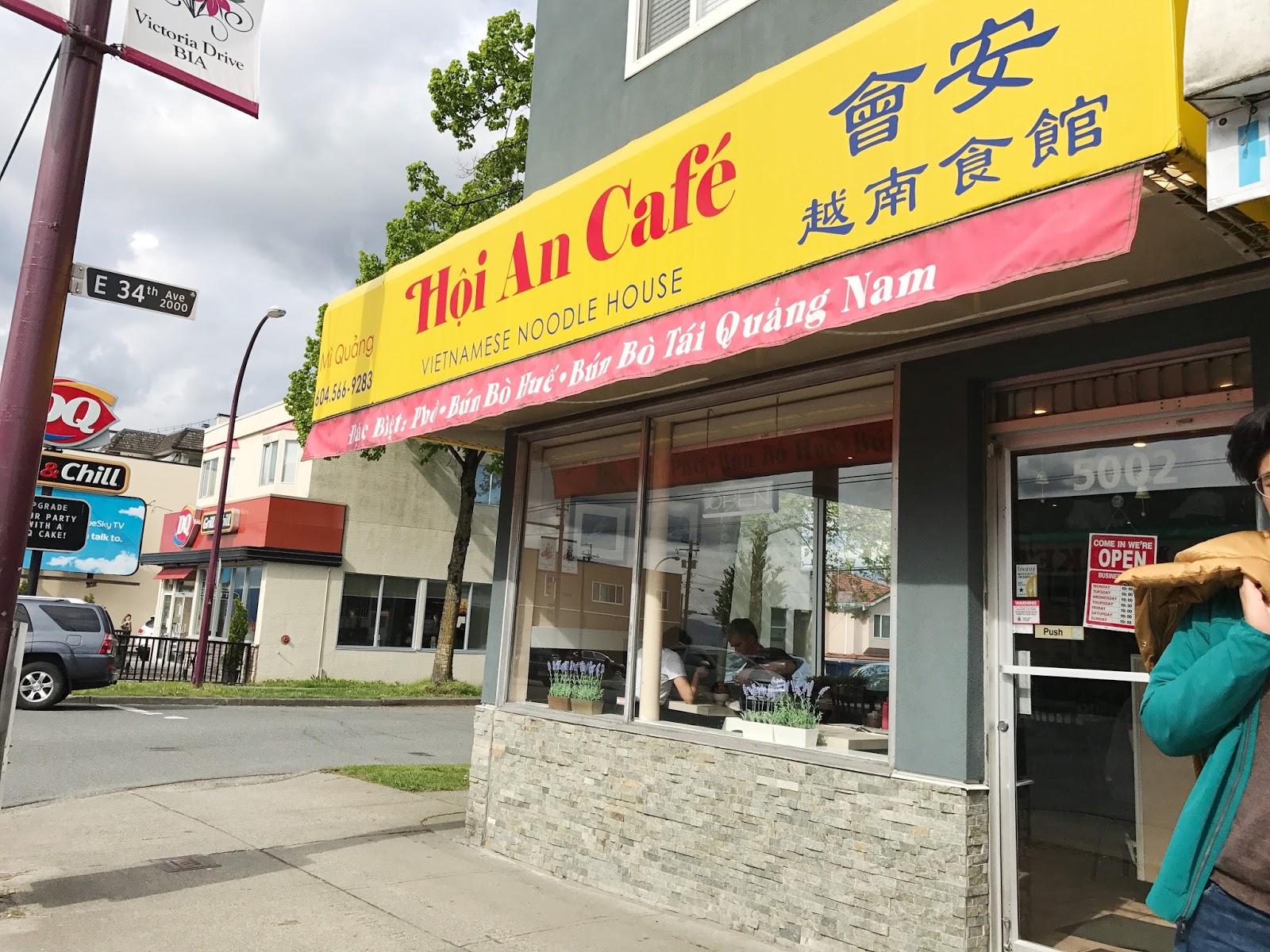 You know what I just realized? Now that I live in Kits, I rarely venture out of the Westside. (This is more or less due to the fact that Jeremy has a preference for staying in Kits, downtown, and Gastown.) Am I becoming a (gasp) Westside snob? JK JK. Burnaby will always have my heart <3

East Van too. I'm particularly fond of Victoria Drive, Fraser Street, Main Street and Commercial Drive (Jeremy however, doesn't see the appeal.) How can one not love Victoria Drive? Asian grandmas with their trolley carts, HK Cafes around every corner, homestyle pho at rock-bottom prices...if you ask me, East Van is where its at!

So after my doctor appointment the other day, Jeremy and I ventured down to Hoi An Cafe for a late lunch (it was 4:30 by the time we finished.)

OH, the funniest thing happened when we were there. My dry noodles came with some unfamiliar herbs on the side...we reckoned it to be a root of some sort. So we asked the girl working there what it was, and after some miscommunication, I asked her to type it into my phone...and she typed "lettuce." She probably thought we were referring to the lettuce that was on the same plate. (Hilarious I know.) Turns out the herb was actually banana root! 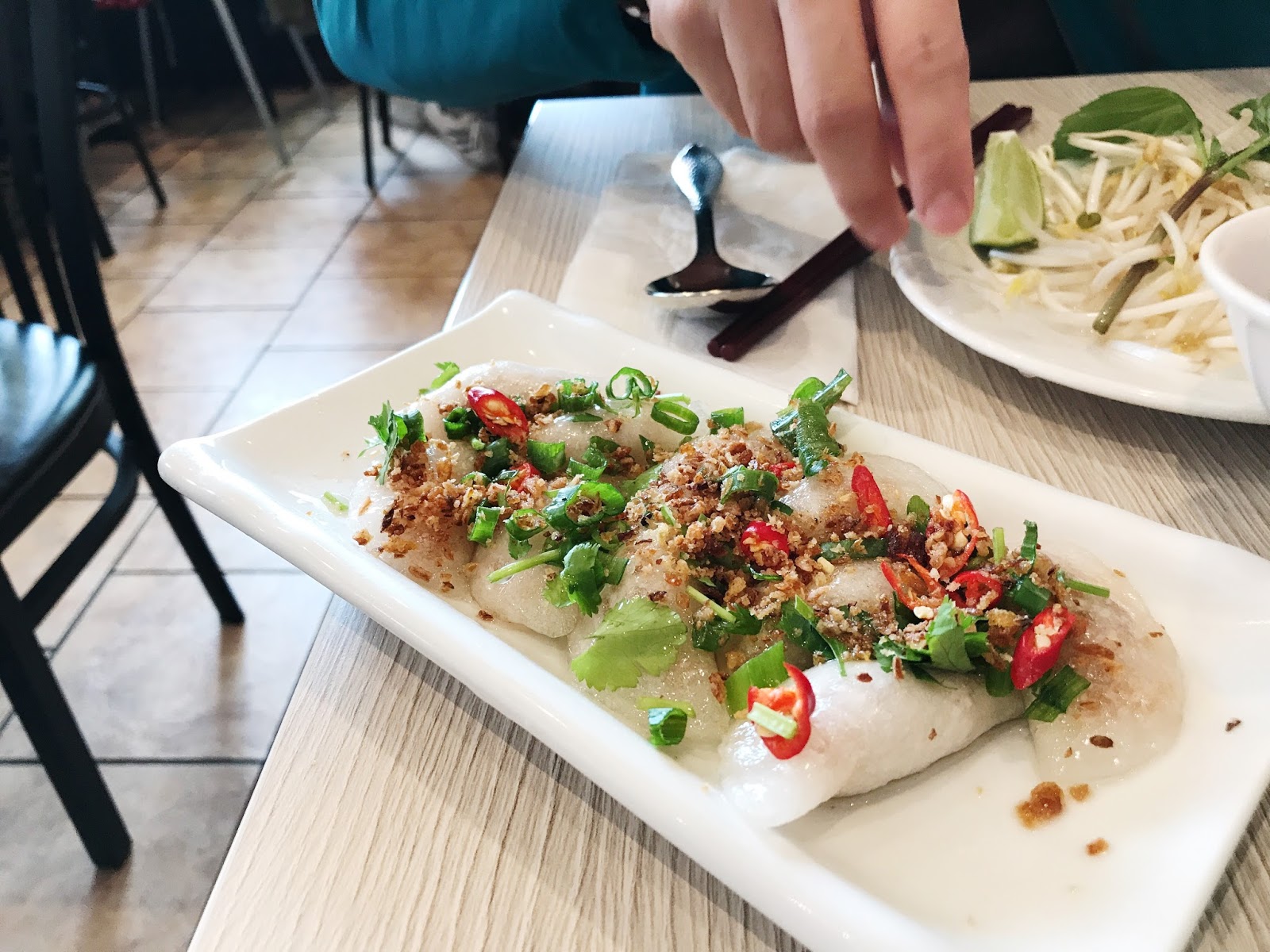 How cute are these miniature dumplings? According to Jeremy, this was "aight." Quoting him directly: "the dumplings were very like, how do I say...I actually don't know anymore." So eloquent of him right? To me, the dumplings looked amazing (the fact that it was piled with fried onions made it look all the more appetizing.) 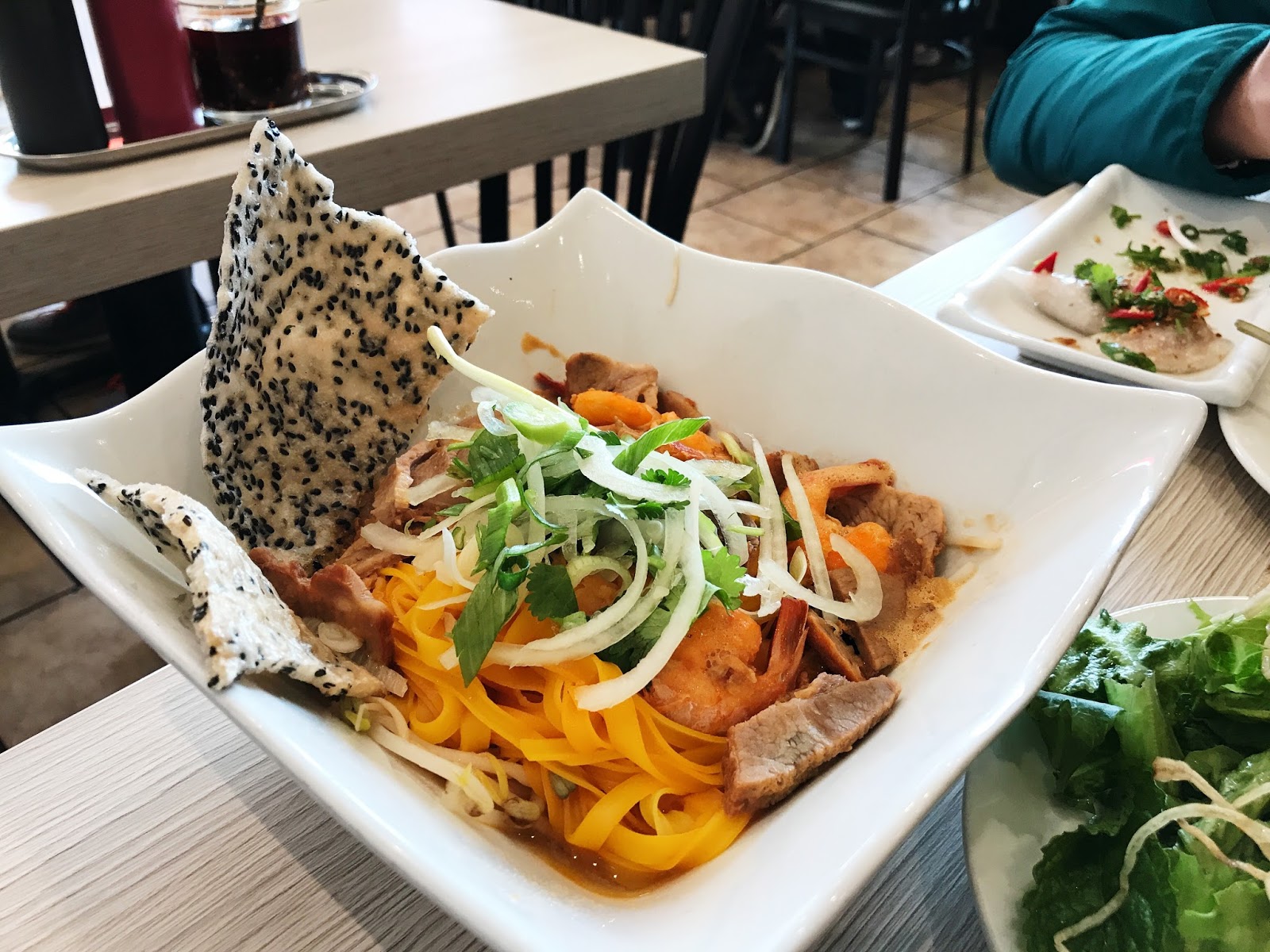 SOO GUUUD. If you're going to order anything, get one of their Hoi An style noodles! They have 3 different kinds: the mi quang, cao lau, and cao lau dac biet. I went with the mi quang because it's the only one that isn't soy sauce based (thus rendering it gluten-free.)

This was insanely flavourful, and way different from any Vietnamese noodle dish I've tried. The pork tasted a bit like char siu. Come to think of it, it looked like char siu too (maybe it was char siu.) The noodles are "dry" but there's actually a pool of soup at the bottom; I ended up drinking all of the soup because it was just that good. 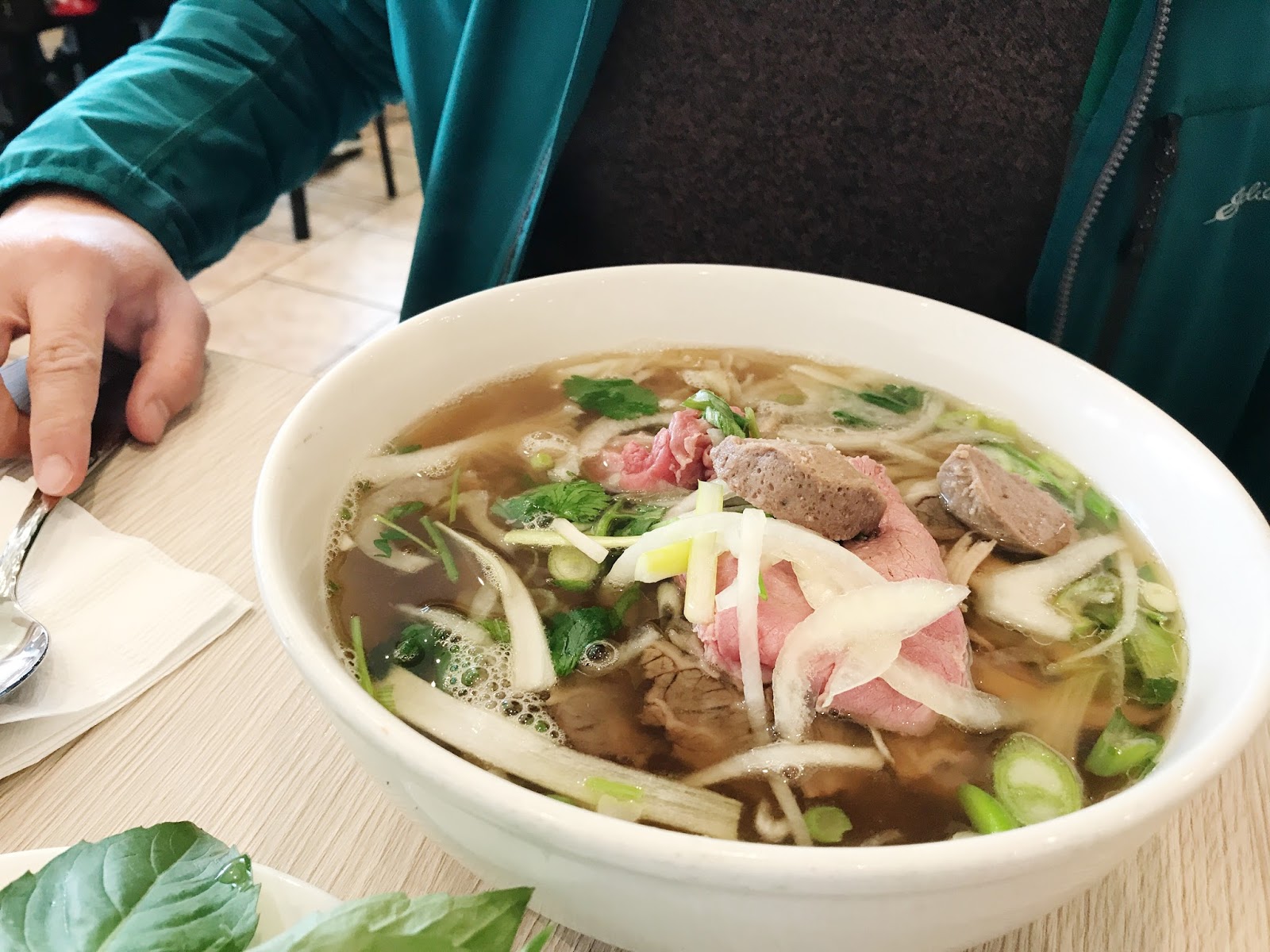 Solid stuff. The rare beef was ridiculously tender and amazingly enough...it didn't overcook in the broth. One sip of the broth warranted a "wow." According to Jeremy, this topped one of our go to pho places, Mr.Red. There was quite a bit of protein in there too. 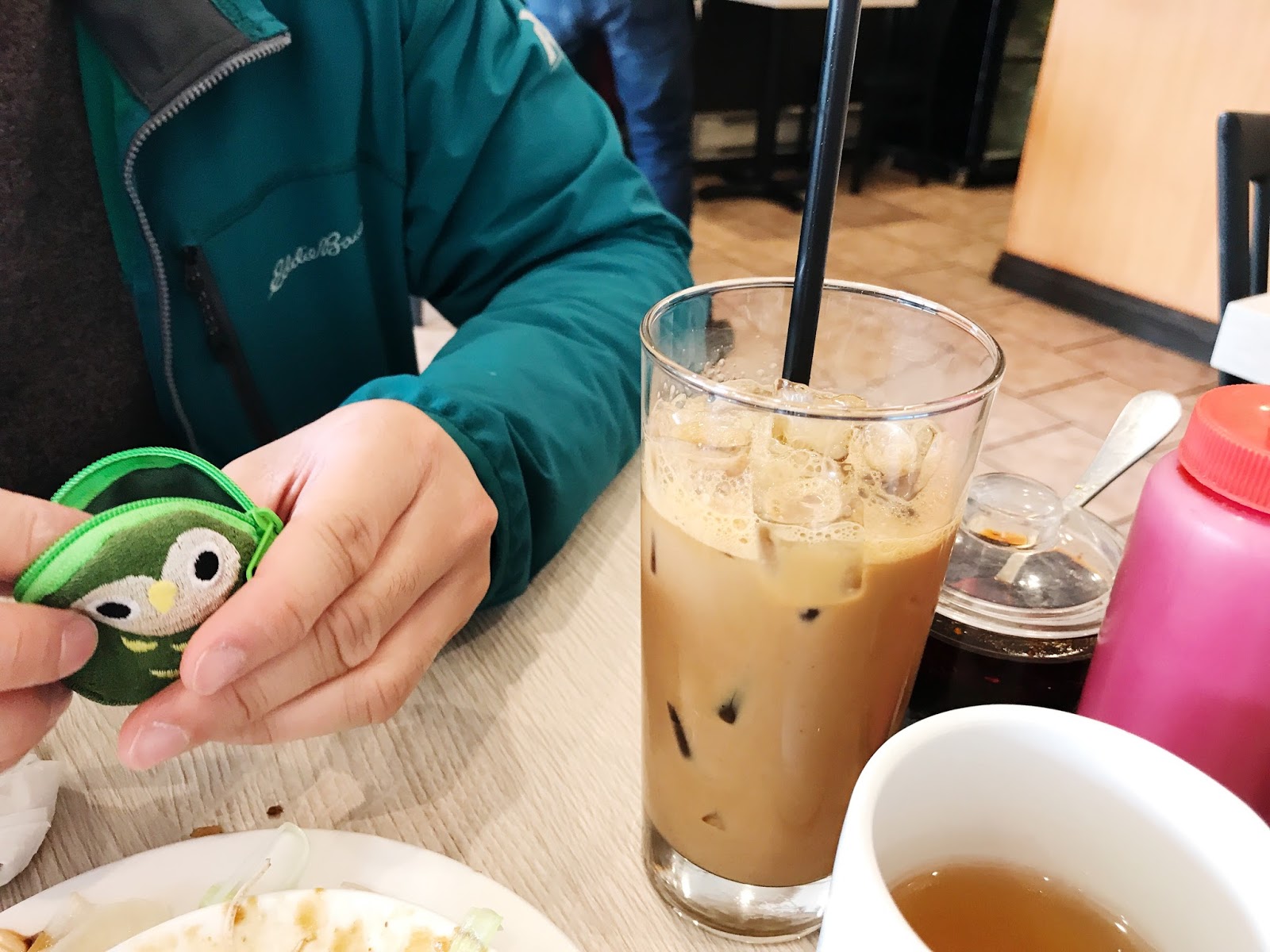