So a month ago we celebrated Jeremy's existential crisis...errr, graduation, at Italian Kitchen with his entire fam jam in tow!

No seriously. "Existential crisis" would be no exaggeration. Thank god that only lasted for a month or so. We're back to normal now (or so I think.)


I would've graduated with him if it were not for the fact that I took a gap year...we are graduating with the exact same degree though! I actually didn't get to see the graduation in person...Jeremy forgot to book seats so we had to wait outside (such a fail I know.)

On a random note ~ you know what I realized when I was registering for my courses the other day? I thought I would be starting off the Winter 2017 semester with fourth year standing, but apparently I'm 3 credits (one class) short! 3 DAMN CREDITS!! So come September I'll technically still be in third year. *sigh*

On the bright side, I'm pretty happy with my schedule and the courses I've chosen this year. For Term 1 I'm taking all electives (3 Art History courses & 1 GRSJ.) I'll talk about them more in an upcoming post! 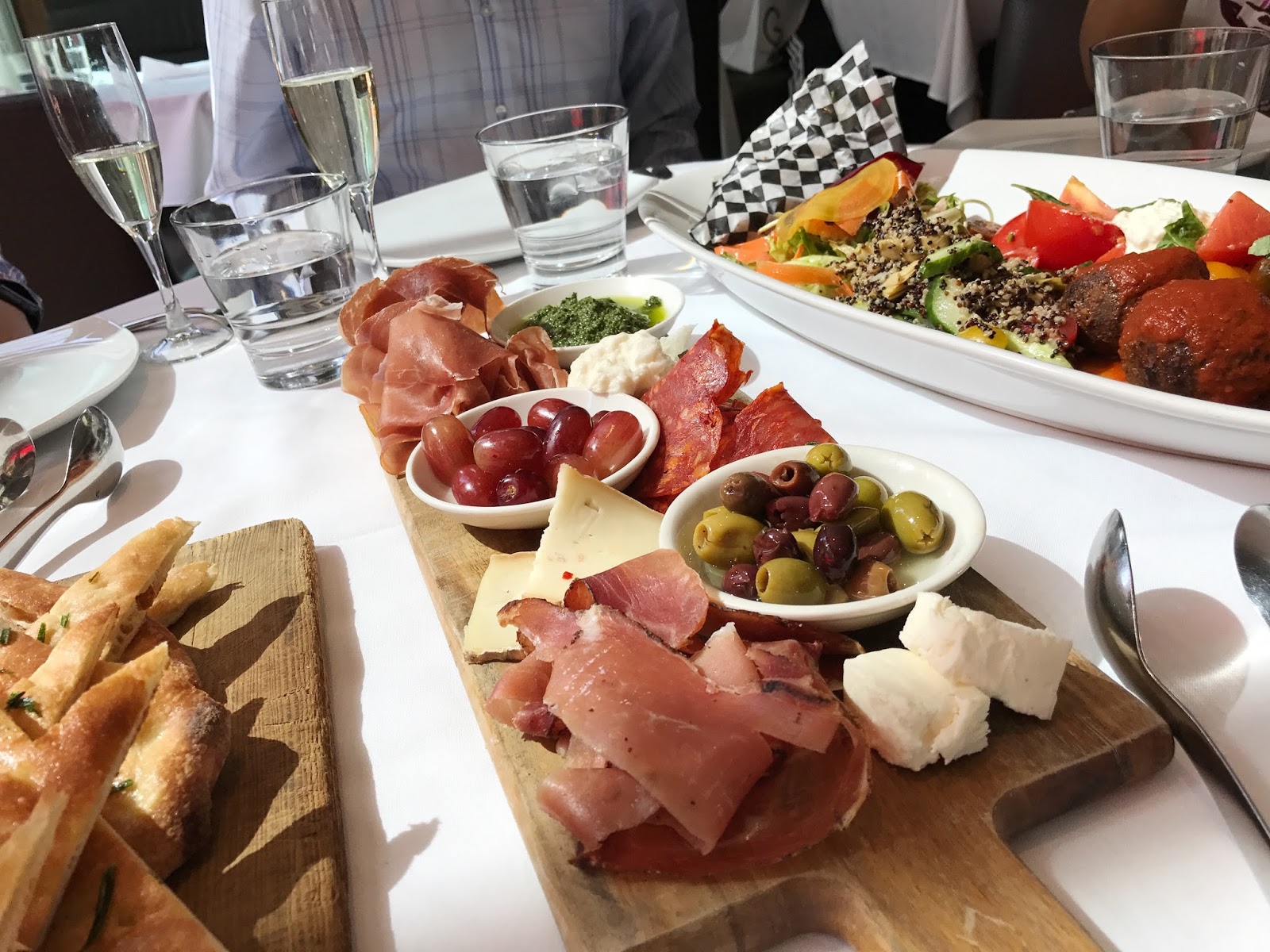 To start, we had the antipasta rustico, which came with a selection of artisan cheeses and cured meat. I don't have cured meat that often, but proscuitto is a favourite of mine. I was particularly fond of the pesto; I didn't get to try any of the cheese, but Jeremy liked it a lot! 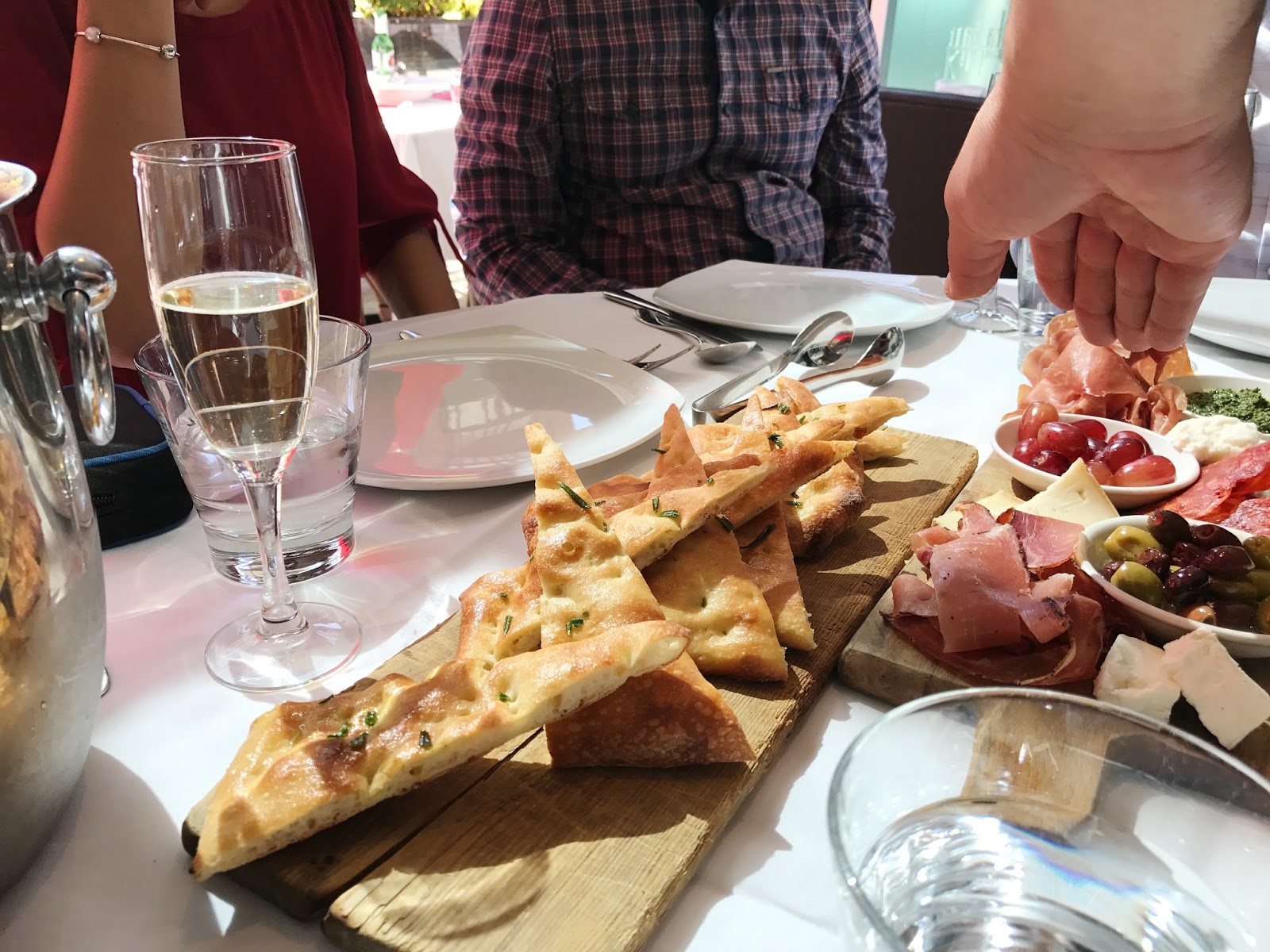 This came with the antipasta rustico and it paired well with the other appetizers! The bread was crispy and accented with herbs! 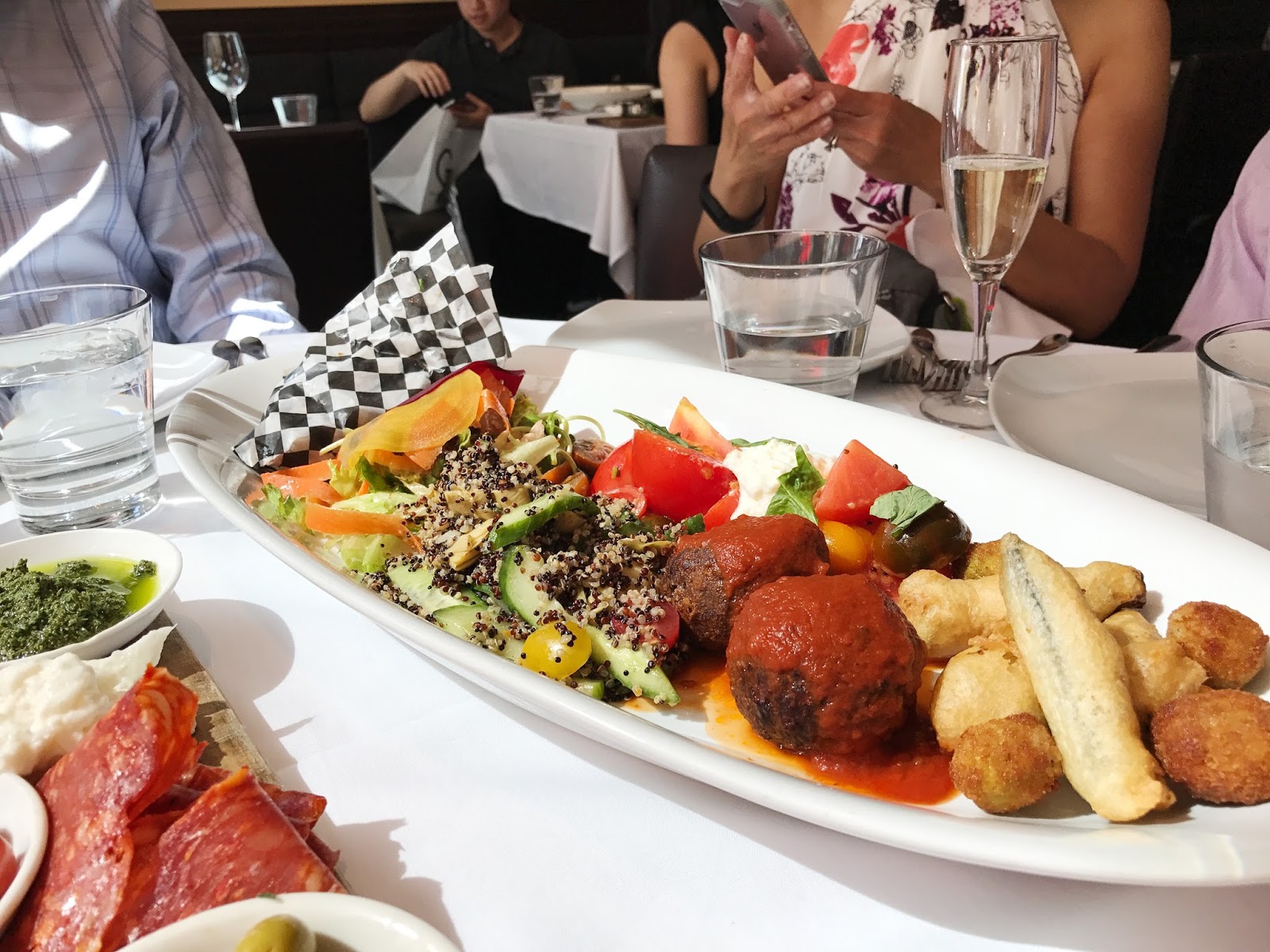 Another humongous appy platter that came with a selection of their most popular appetizers! The meatballs were quite good; juicy with a flavourful sauce. Judging from the photo, the deep fried (whatever that was) seemed like it was too heavily battered. The quinoa salad wasn't particularly interesting, the highlight of the meal was definitely the meatballs! 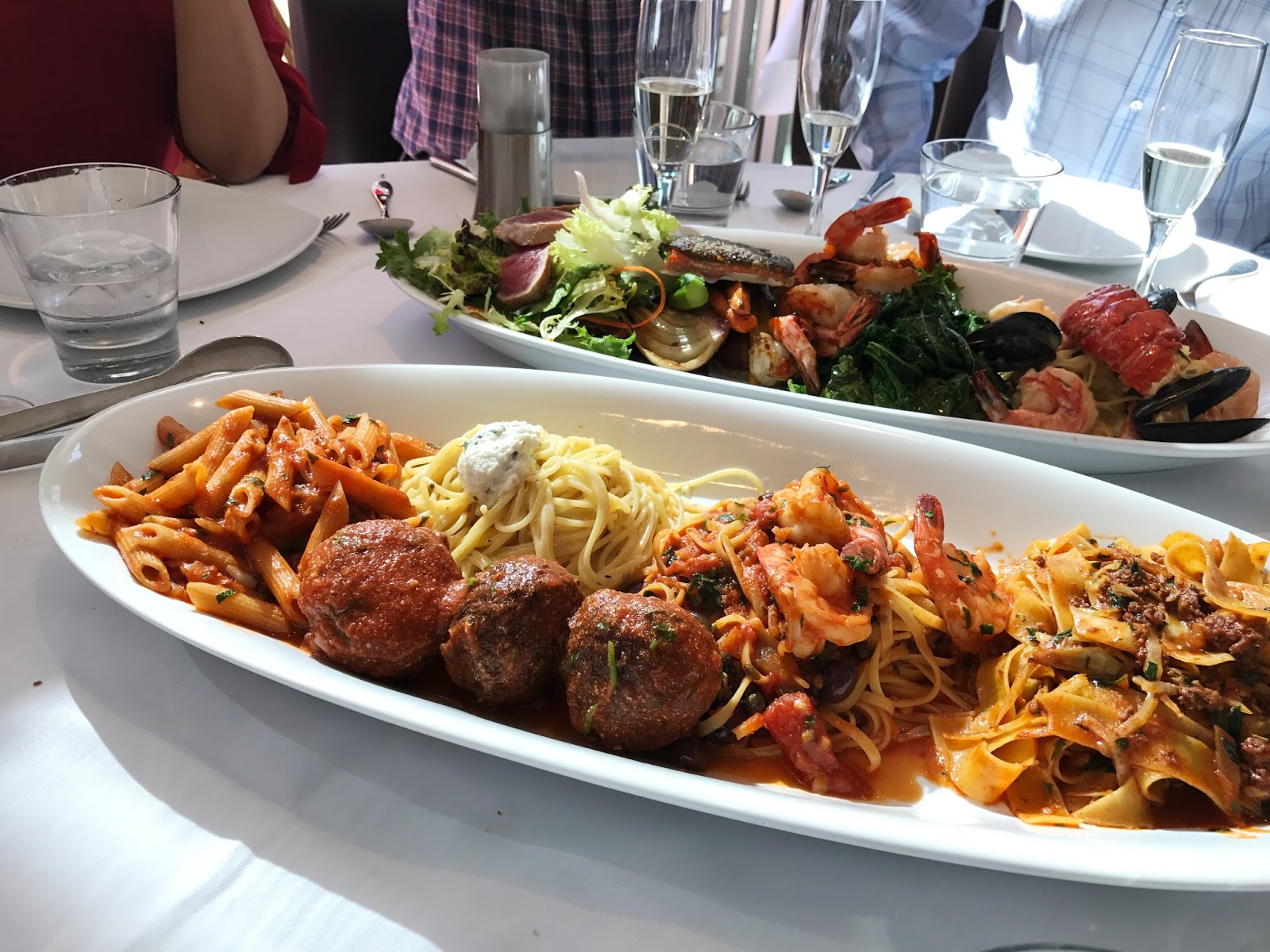 The pasta platter came with a selection of their most popular pastas. This seemed like a good deal because you get sample 4 different pastas! The truffled spaghetti and seafood linguini was particularly tasty! 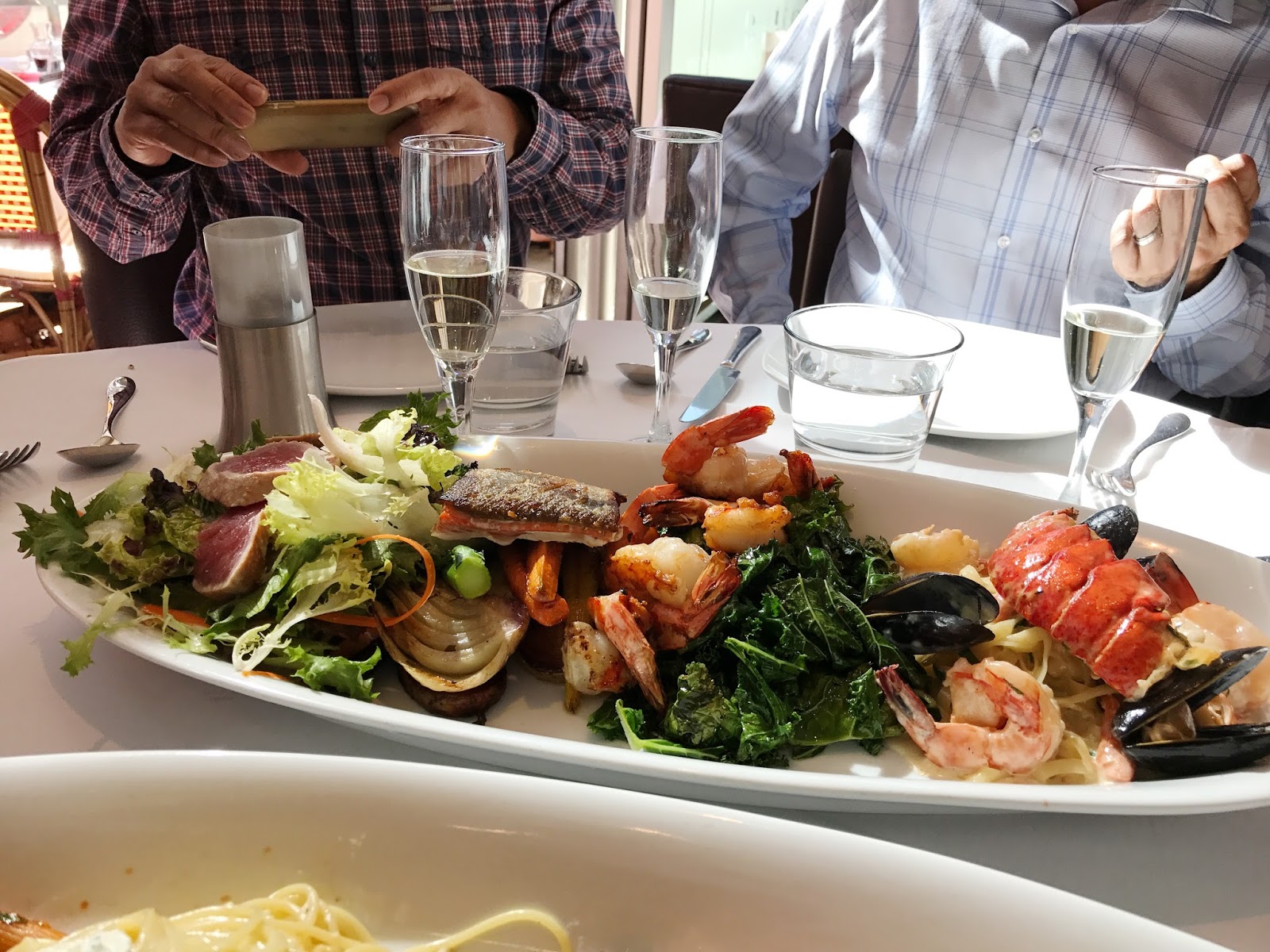 This was the priciest of the platters because this one included lobster! It also came with a generous amount of shrimp and slabs of seared ahi tuna. Jeremy was particularly fond of the buttered kale. 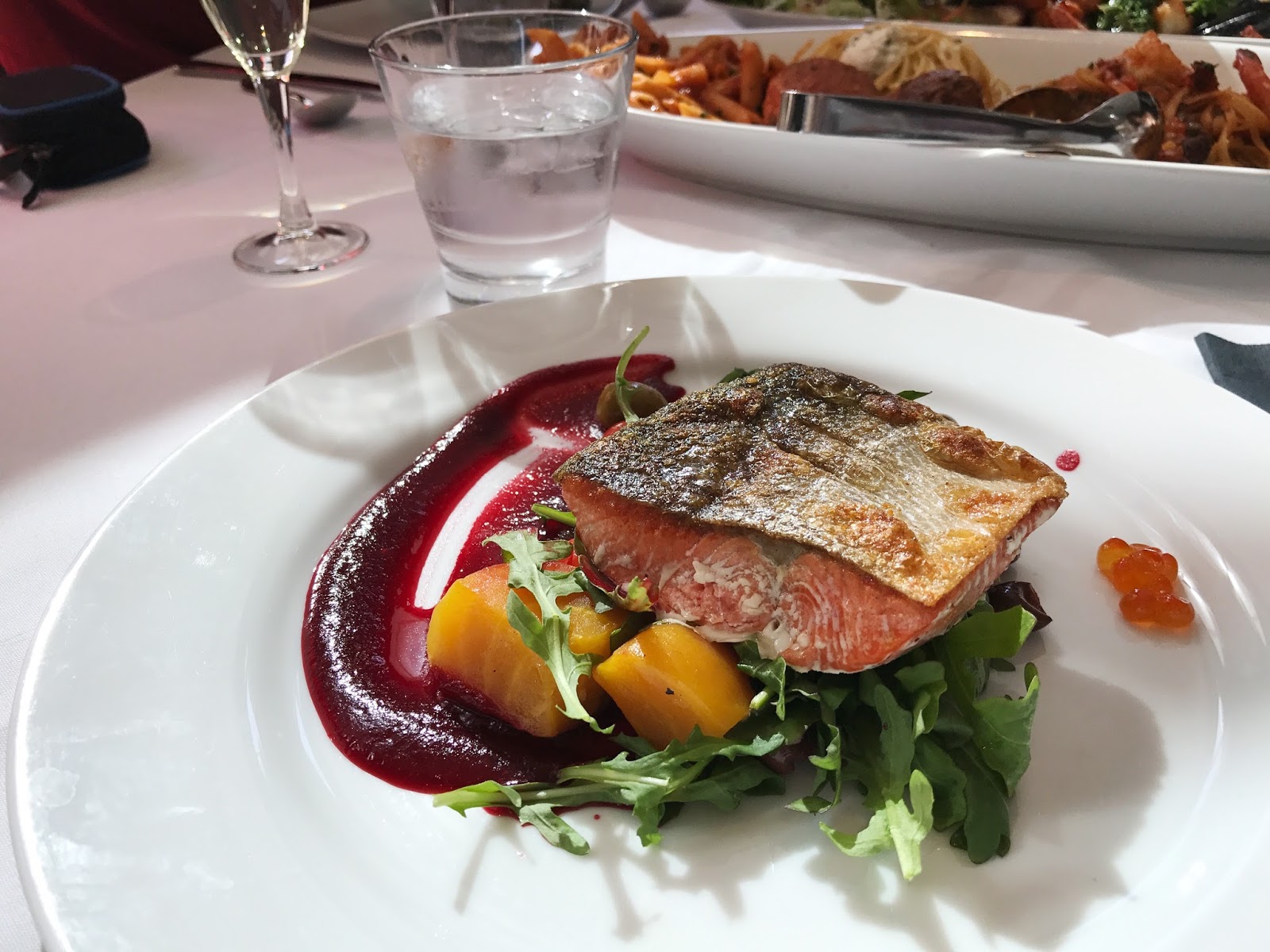 Since I couldn't eat any of the pasta (being gluten-free and dairy-free) I ordered my own entree dish! I picked the wild salmon; the salmon itself wasn't particularly notable but the beet puree was absolutely delicious!