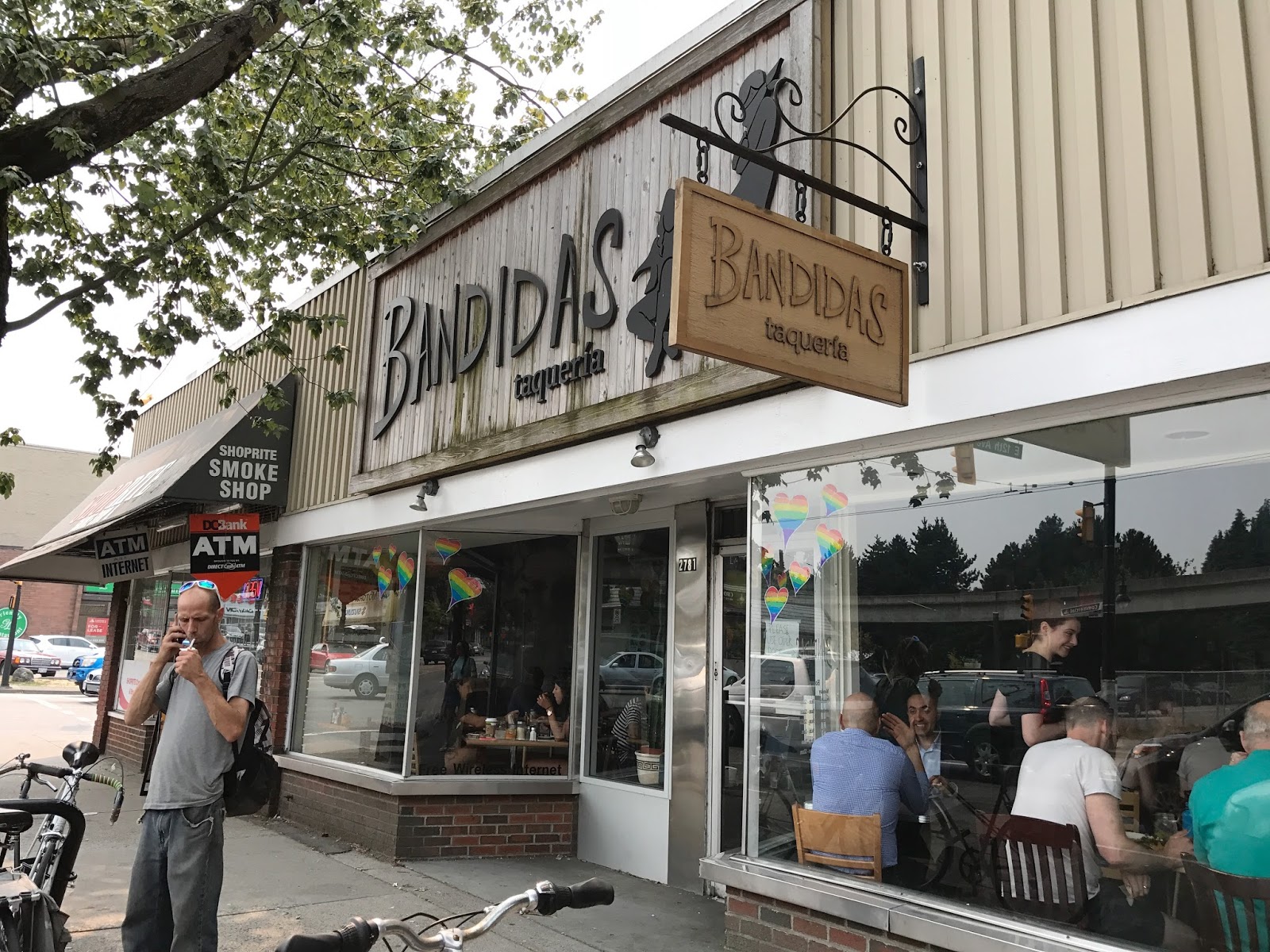 When you're ill-inspired and jaded by the same old same old, what does one do? Branch out of course! Shuddering at the mere thought of another omelette...we decided to forgo a "normal" brunch in lieu of the unconventional Bandidas Taqueria; brunch fare with a Mexican twist!

Admittedly, I was mainly won over by the promise of gluten-free french toast (Mexican it is not, but do you know how hard it is to find GF french toast?!) You don't even know.

Sigh. Such is the struggle of celiacs everywhere.

The price tag had me too, $12 for 3 massively thick slices? And house-made apple compote to top it all off? Lovely, just lovely!

So there we were, Jancis with her salsa speckled benny, Julie with her monstrosity of an order, and I, with my gluten-free french toast in all its glory. 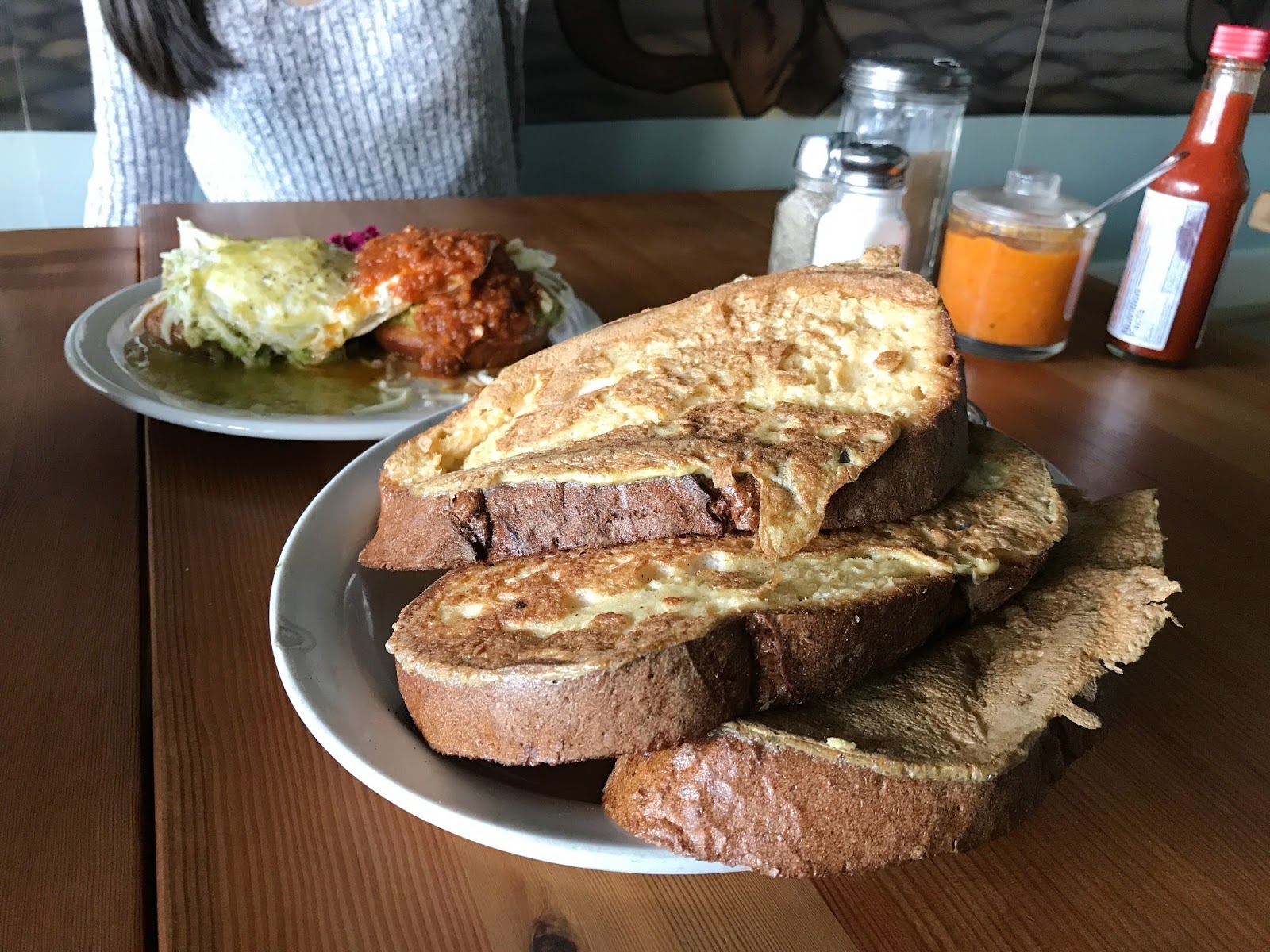 This was an absolute beast of a french toast. The picture really doesn't do the size justice. The thing was ridiculously huge. Even more shockingly so then the nachos. The nachos, that was expected. This on the other hand, was not. Definitely not your average french toast; in both size and make. I haven't had actual FT in ages, but this was a darn good one to say the least. Pillowly, soft and eggy, the texture was reminiscent of actual, gluten-laden bread!

I only ended up consuming one piece (that's how big the pieces were.) I packed the rest up for my mom to try and surprisingly, the bread was still springy and moist hours later! 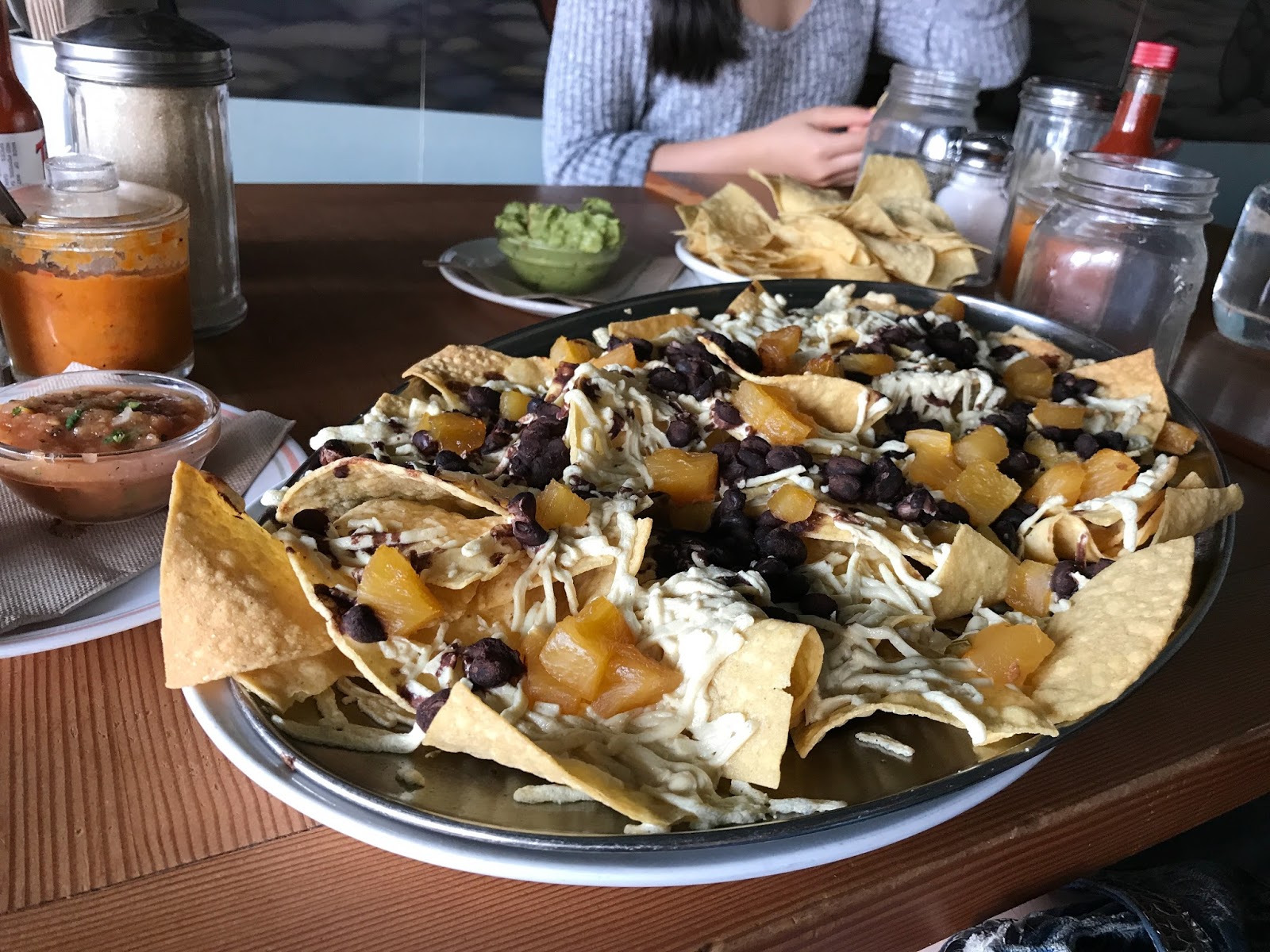 If you don't salivate at the mere thought of a plate piled high with vegan/gluten-free nachos, there's something wrong with you. This was ridiculously massive, but rightly so, given that it was $17 and meant for sharing. Julie got this as her entree but Jancis and I ended up eating the other half because predictably, she couldn't finish it! The savouriness of the daiya paired incredibly well with the sweetness of the roasted pineapple. Since the chips were unsalted, it didn't distract from the other components of the dish. 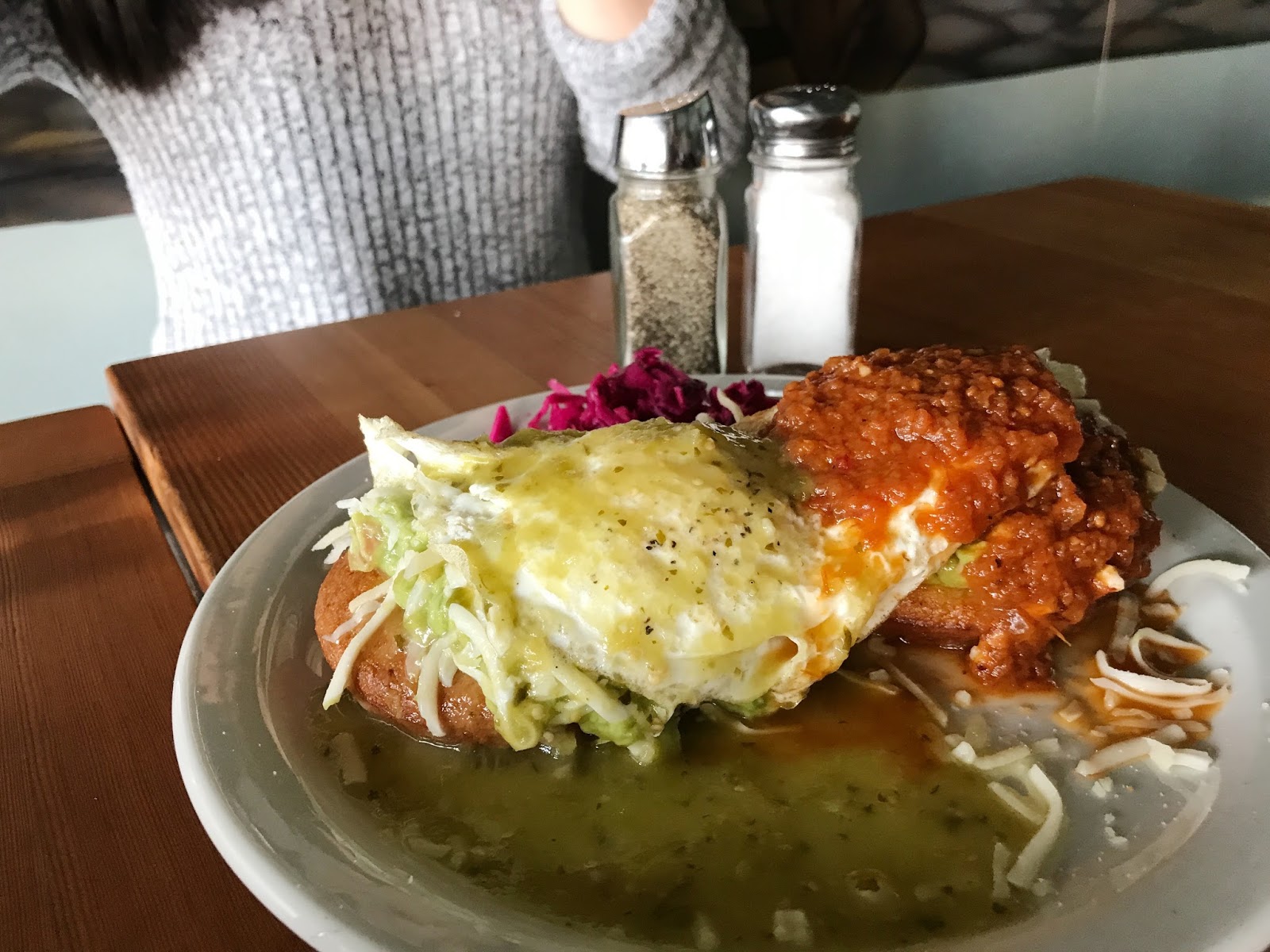 Jancis had the Hick's Benny, and she proclaimed it to be the least visually appealing out of all the dishes we had ordered. She wasn't discouraged though, what it lacked in photogeneity it made up for in flavour. The benny was delicious; an amalgamation of guac, salsa verde and melted cheese atop a GF cornbread muffin. A Mexican take on a tried and true brunch staple. 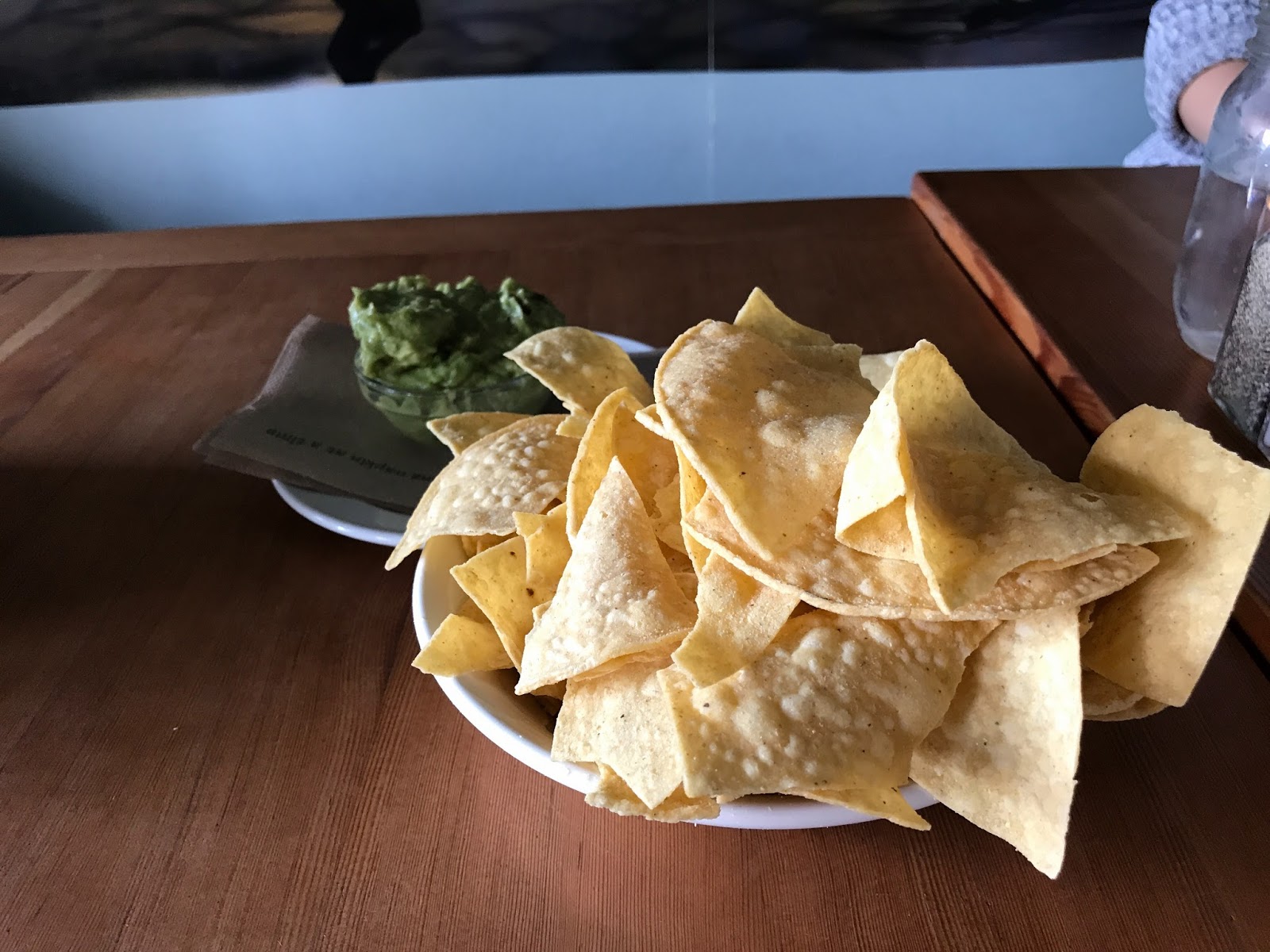 We weren't planning on eating Julie's nachos, but in the end, we devoured it in its entirety (oops.) So this was a repeat order of sorts that we didn't end up finishing (this was no match against a mountainous pile of nachos oozing with daiya.) However, I did appreciate that the chips were unsalted, especially convenient if you're watching your sodium intake. It came with a generous helping of guac on the side, which we gleefully devoured. 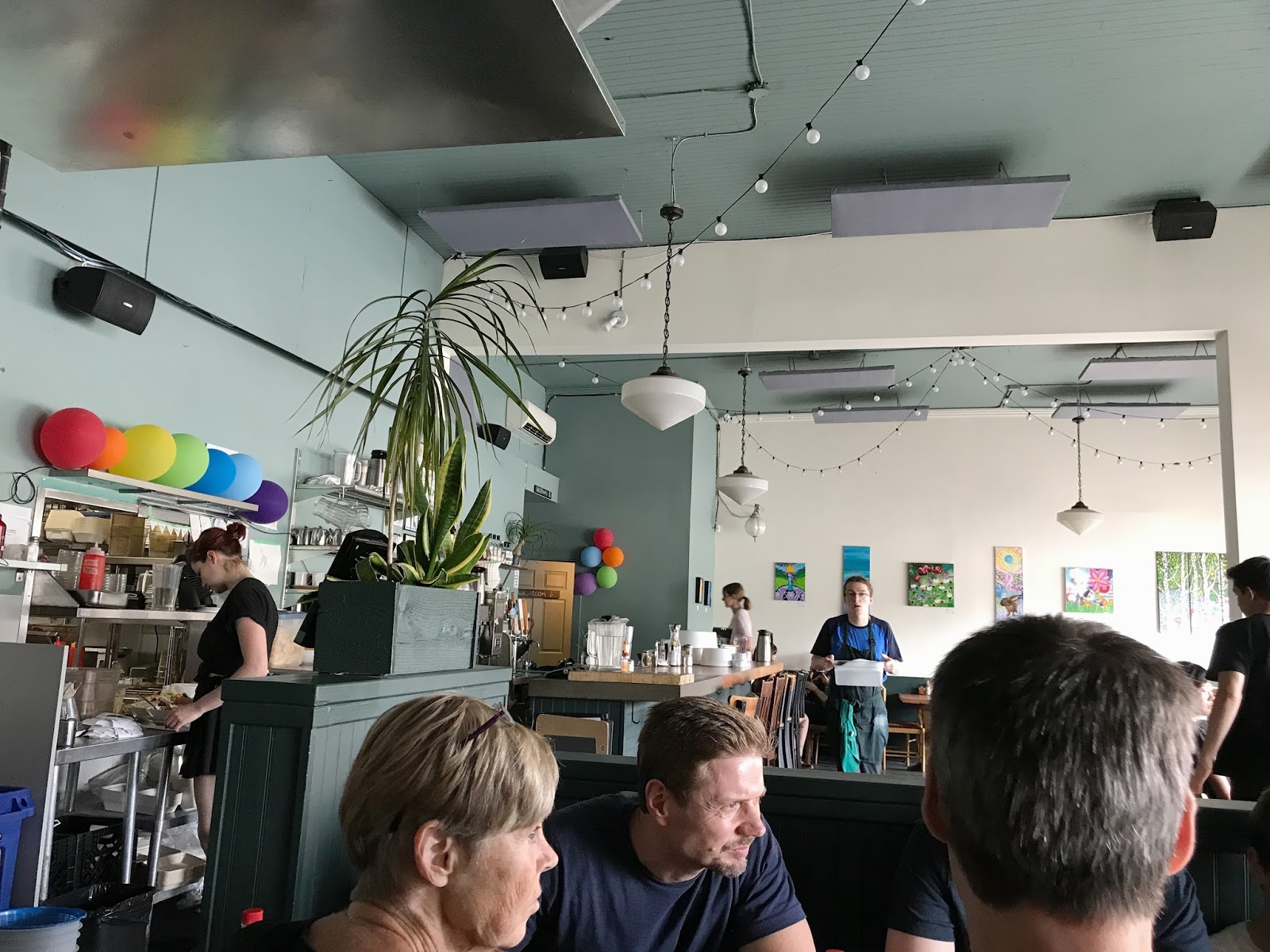