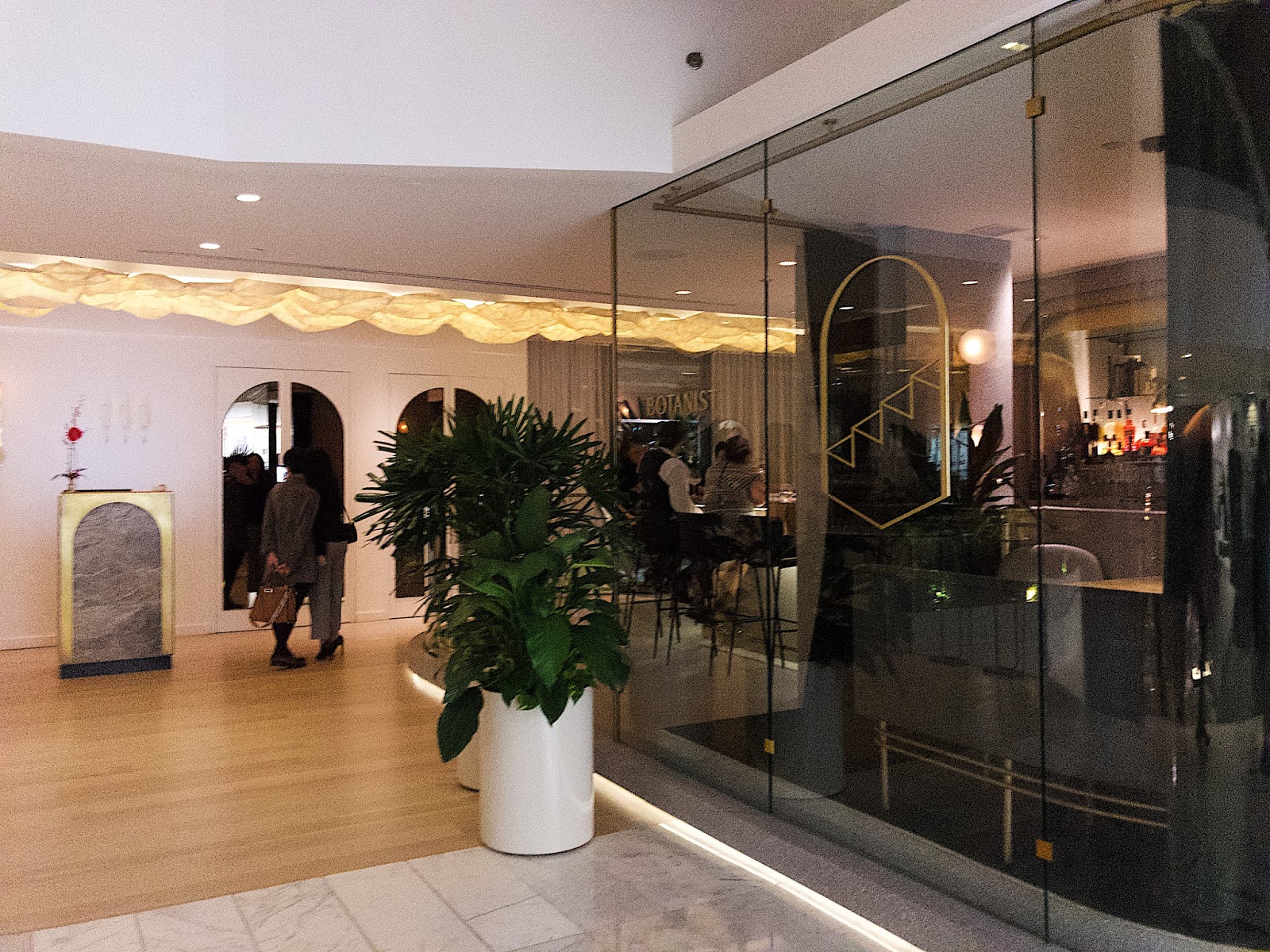 Happy 2018 fam!! Thanks for sticking with me this past year. It's been one hell of a ride. Moving out of my mom's house to Kits...getting kicked out by my roommate...finding another room to rent...moving in with Jeremy...and then subsequently moving back in with my mom (I'm just surprised I managed to keep all of my stuff intact.)

It's been a hell of a ride alright.

Anyways...I turned the big 2-2 last week. I started this blog when I was 17 (17!!) Crazy how I've managed to sustain Vancity Noms for that long.

Being that double digit birthdays only occur once every decade, it only seemed appropriate to celebrate with a lavish meal of sorts...no?

I'm big on birthdays, but the thing is, I don't have a lot of friends (just being honest here LOL,) so intimate gatherings are pretty much a given. I was going to invite one more person but she happened to be out of town on my birthday, so it was just Jeremy, Julie, and I!

I first read about Botanist on Dwell Magazine, and not going to lie, (food aside) I chose Botanist based on aesthetics alone. Read the article, here: https://www.dwell.com/article/vancouvers-botanist-restaurant-updates-the-power-lunch-a9b7216c

It was between Botanist or Kiss Tanto (I'm a big fan of Glasfurd & Walker...can you tell?) I chose the former over the latter because Kiss Tanto seemed a bit out of the way, Botanist being the more convenient of the two.

Funny story: I actually went to the wrong Fairmount by mistake (The Fairmount Hotel on West Georgia,) instead of the Fairmount Pacific Rim. I had no idea the other one existed. So in a panic, I taxi-ed to the Pacific Rim ~ thank god it was only 2 minutes away!

I have to commend Botanist for their service...our server was lovely all the way through! Not only that, upon arrival, I was presented with a birthday card, which all the staff had signed!

In other exciting news...I made the Yelp 2018 Elite Squad again this year! Since I've been on the Elite Squad for 5 years in a row I'm Gold status now (whatever that means.) Anddd, they're hosting an awards show at the Fortune Sound Club this year ~ which they cleverly named "the Yelpies." Think I might go just for the hell of it. 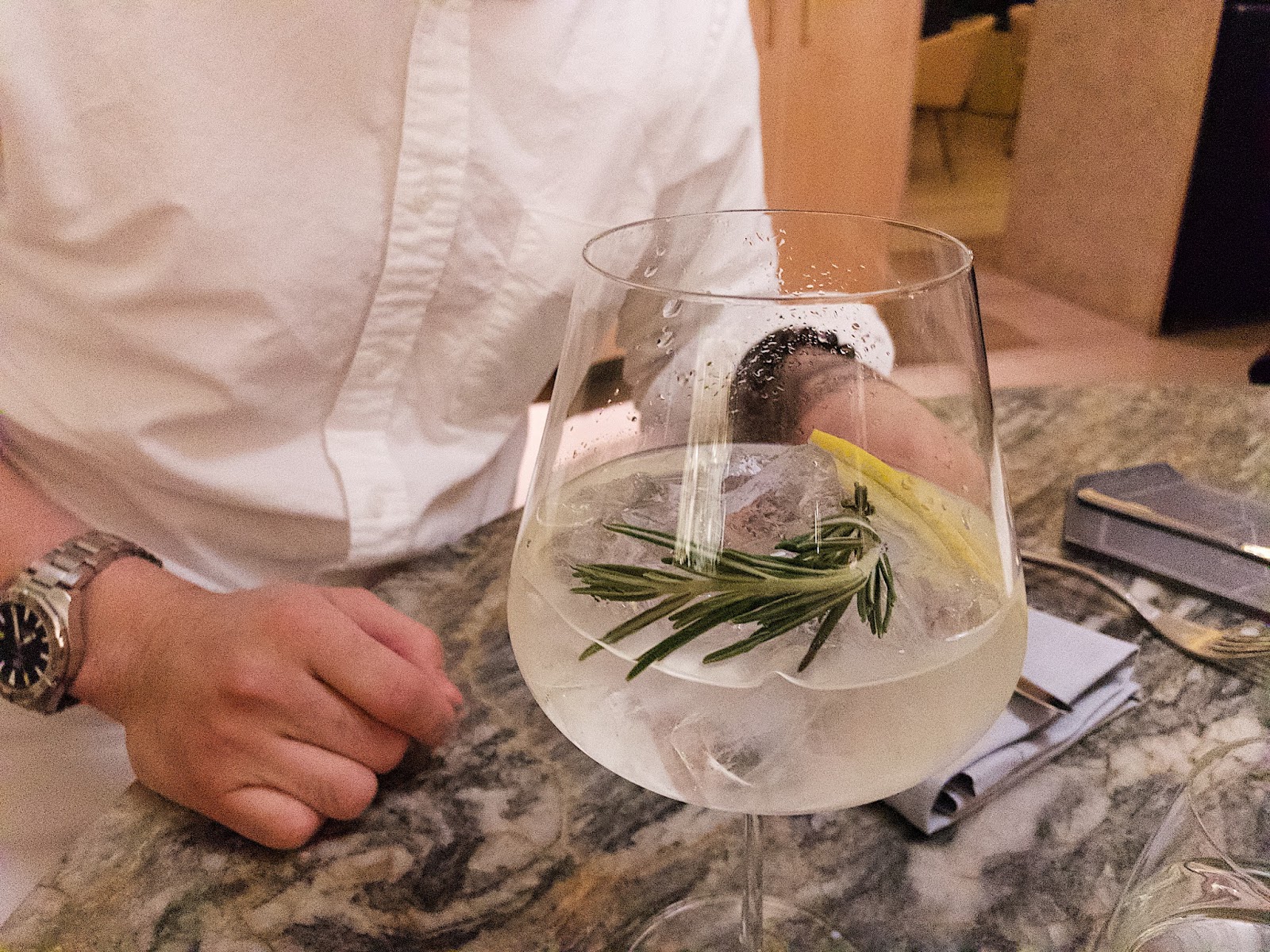 Jeremy's drink of choice. This was nice. It was light and florally, as the description suggests. The elderflower was very apparent in this one. 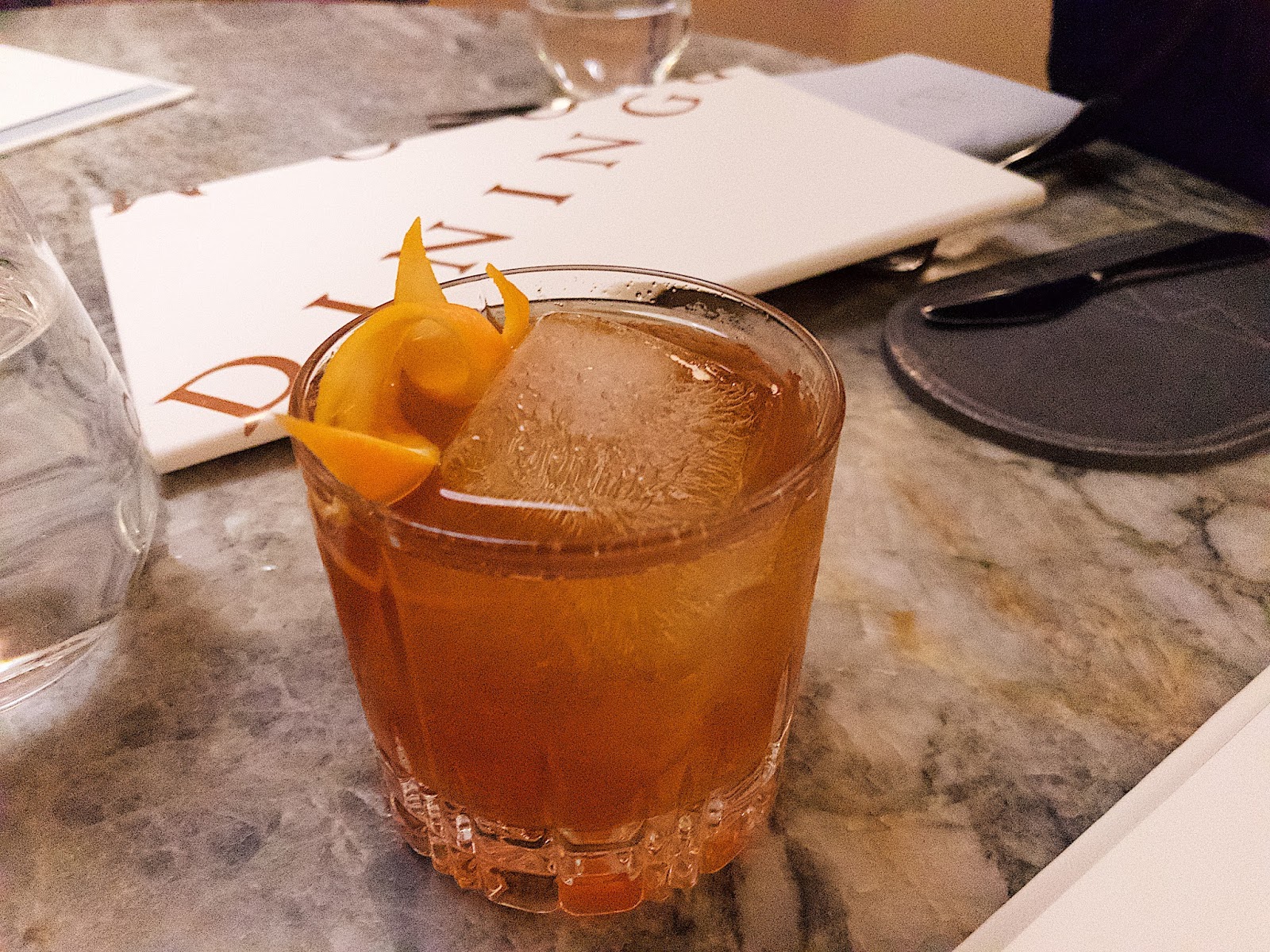 I like drinking Cognac. Maybe because rappers drink it and somehow, I'm channeling them by drinking it (lame-ass reason I know.)

The nectarine flavour was VERY pronounced. And the cognac...I could definitely taste the cognac. What got me was the punny name...Rye n' Reynolds, get it?! A homage to our homeboy Ryan Reynolds! 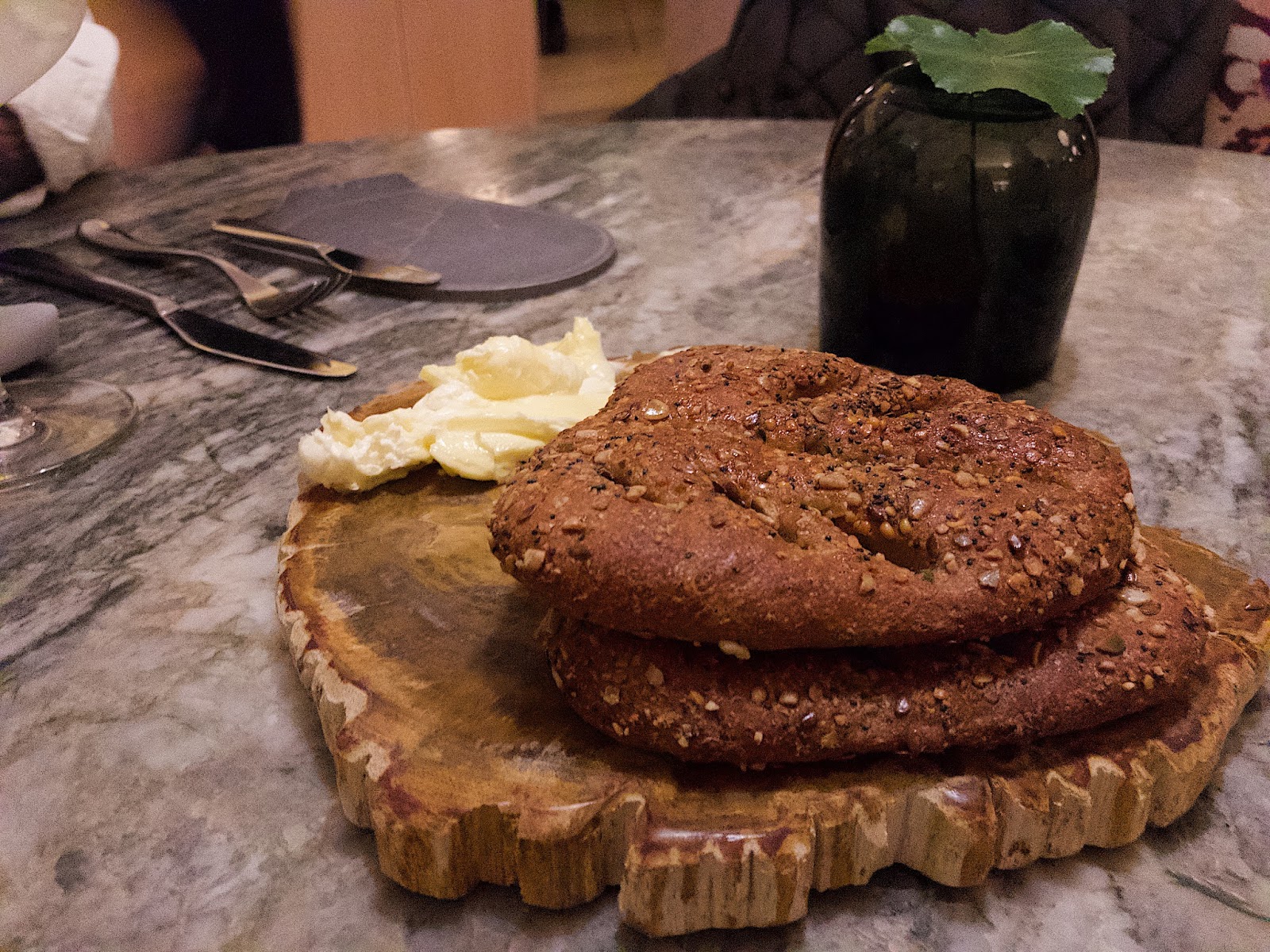 This was some bomb-ass bread. Very seedy - so very seedy. Very flavourful as well, I could taste the seeds that were evenly distributed throughout. Even though I'm partial to fluffy bread, I liked this. Dense bread is nice, once in a while. 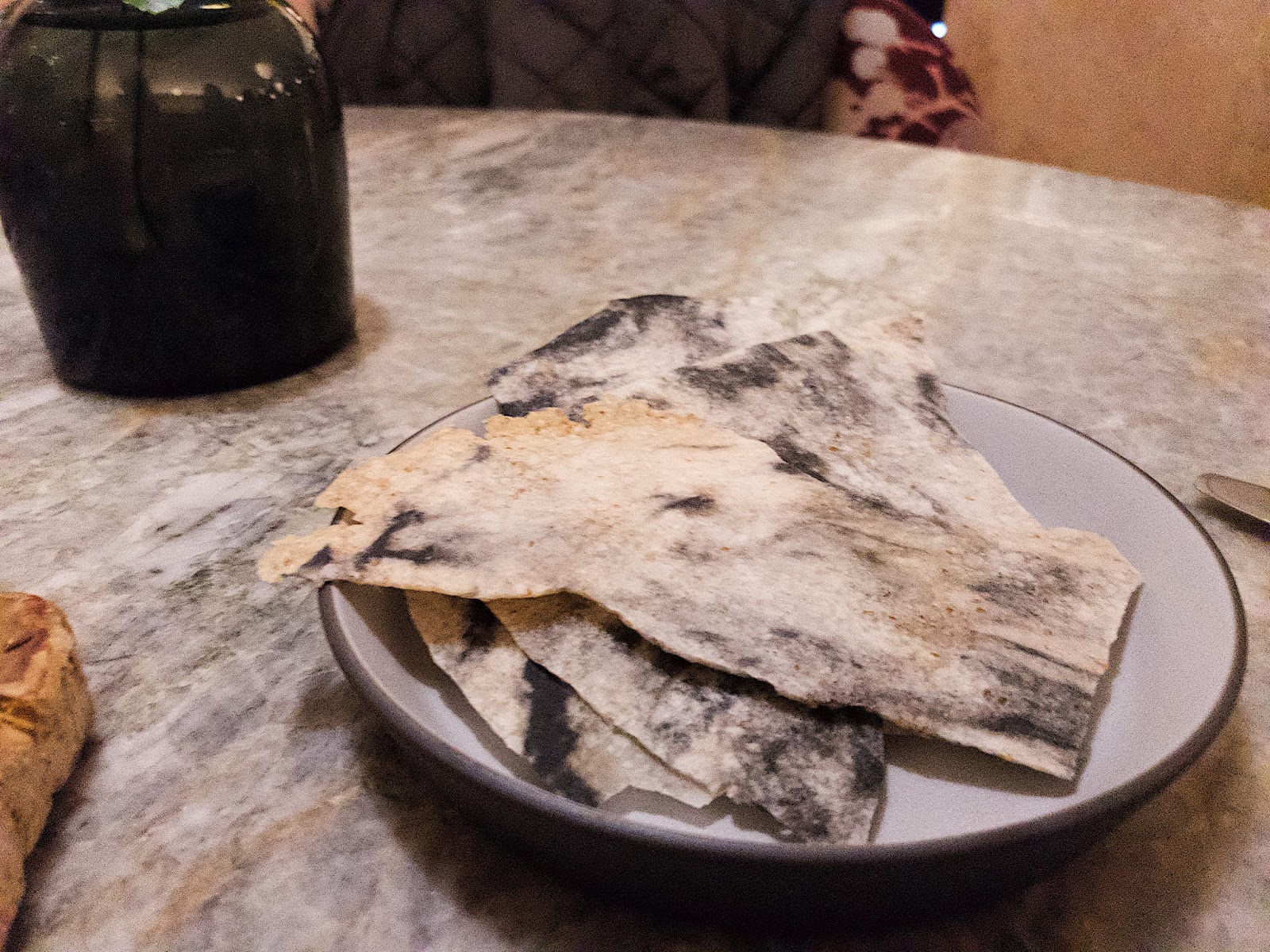 Woah...we have some major chameleon action going on here! Julie had this as an appetizer (as she's vegan.) Isn't this just the coolest thing? It matched the table! If only these were sold in stores man, if only! They were chip like in texture but as expected, tasted like rice crackers! 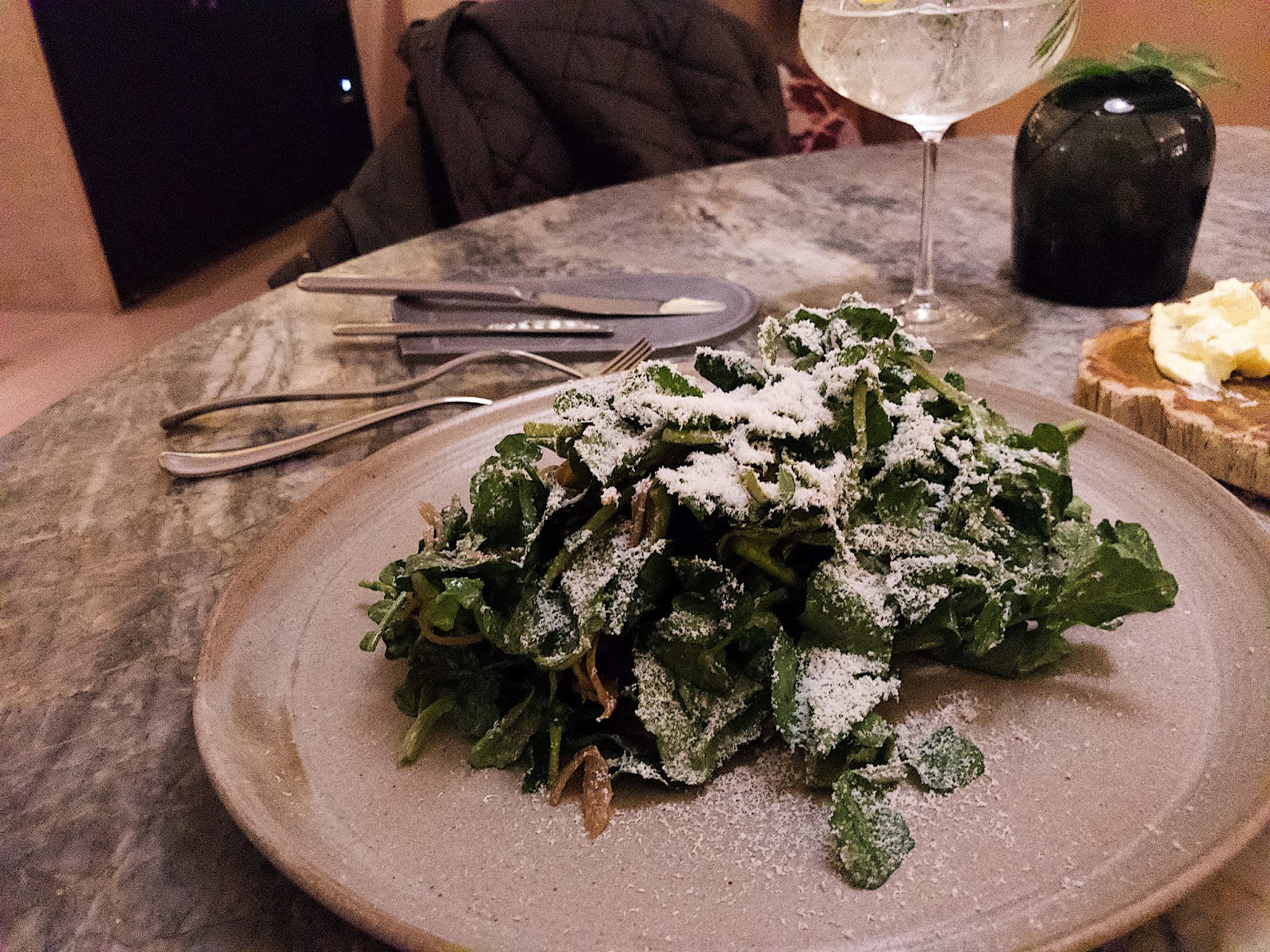 Paying almost $20 for a bare-boned salad is only acceptable on birthdays (well for us at least.) Was it worth the $17 Jeremy paid? In his words: "dude, I can make this at home." Indeed so. Watercress leaves dressed with goat cheese and balsamic, it did seem a little basic for the price. 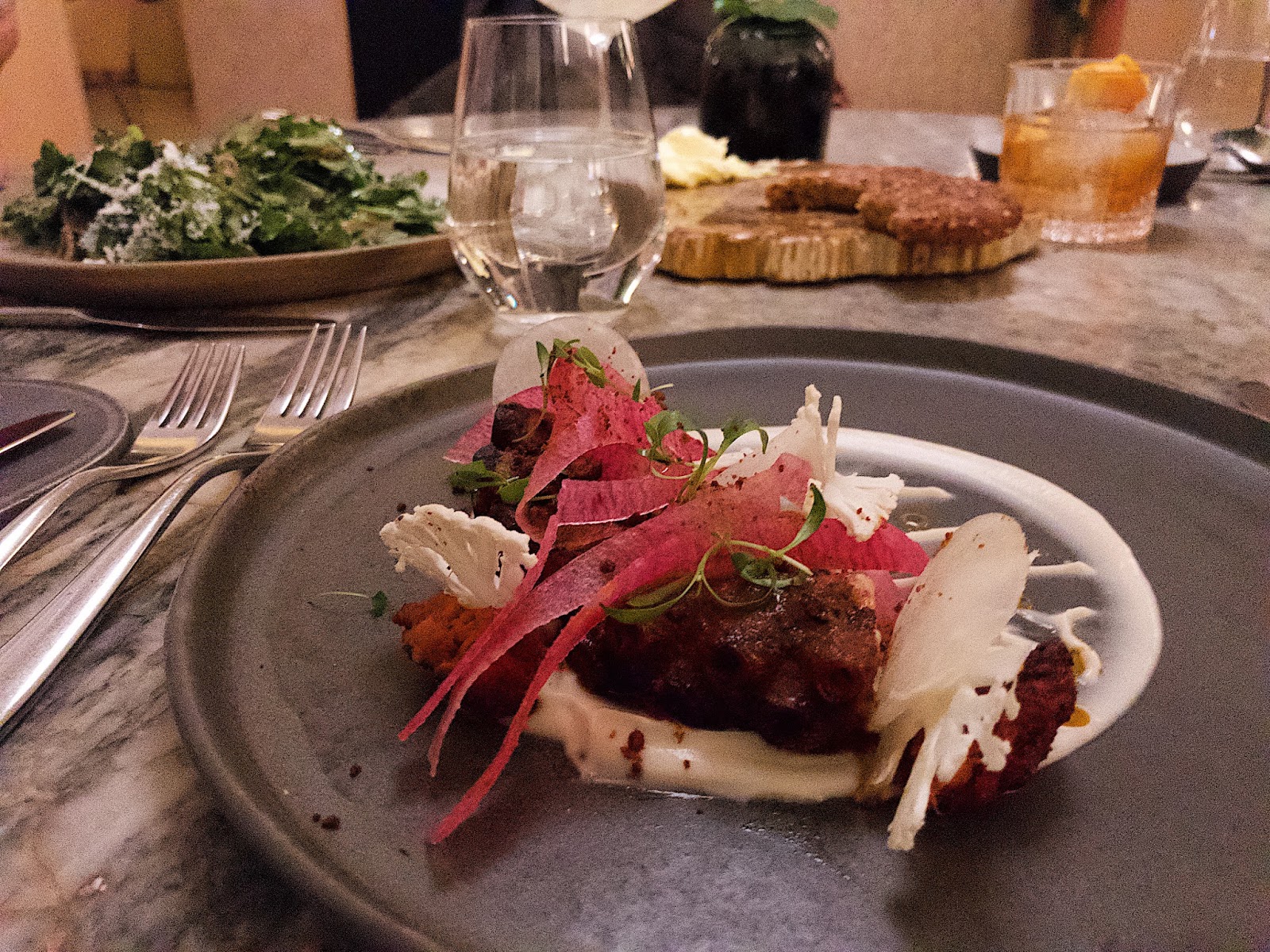 My appy of choice, which was made to my dairy-free, nut-free specifications! The white stuff looks like mayo, but it's actually cauliflower puree! This was just breathtakingly beautiful, and the cauliflower mayo was absolutely scrumptious. The octopus really did taste like chorizo, in fact, it could've had me fooled for an actual chorizo sausage (if it wasn't for the texture!) 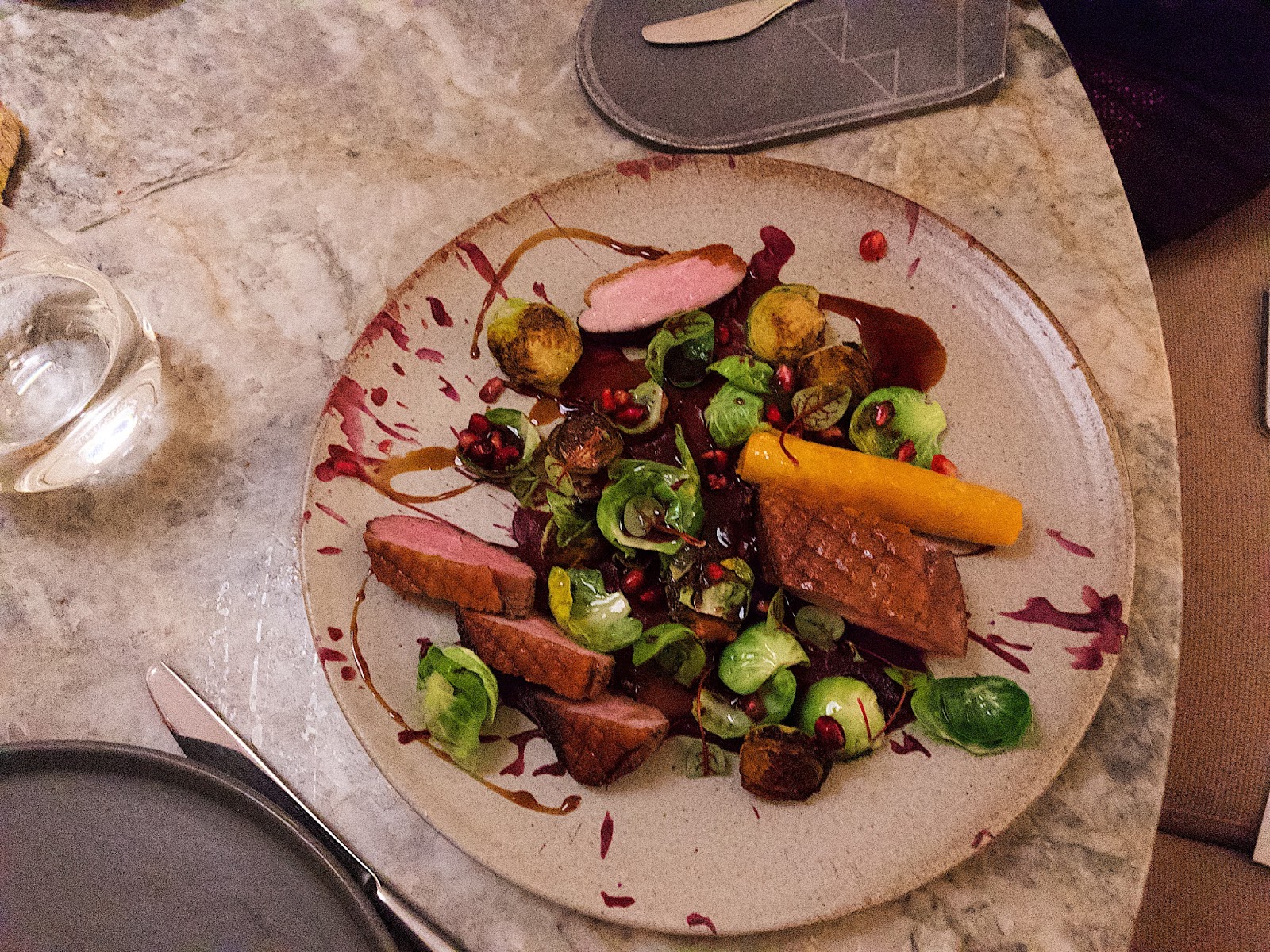 My entree of choice. This tasted EXACTLY, and I mean exactly, like Cantonese roast duck. Y'all know what Cantonese roast duck tastes like, right? Well, this could've passed for the real thing, if it were not for the delicate plating and its medium-rare centre. 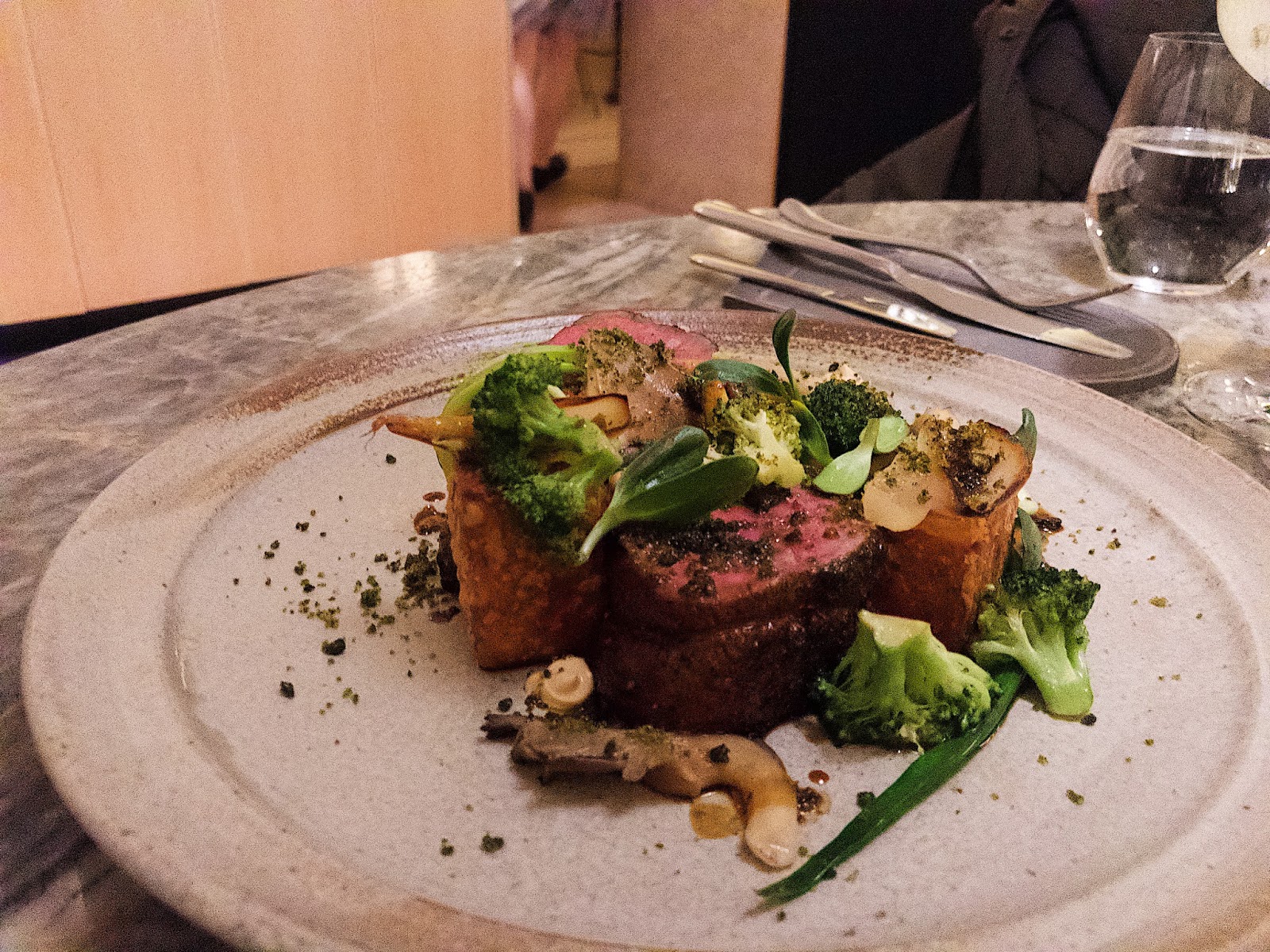 Jeremy managed to order the second most expensive entree as his main of choice (the other option being the lobster.) It was well worth it though. Perfectly medium rare and exquisitely juicy! 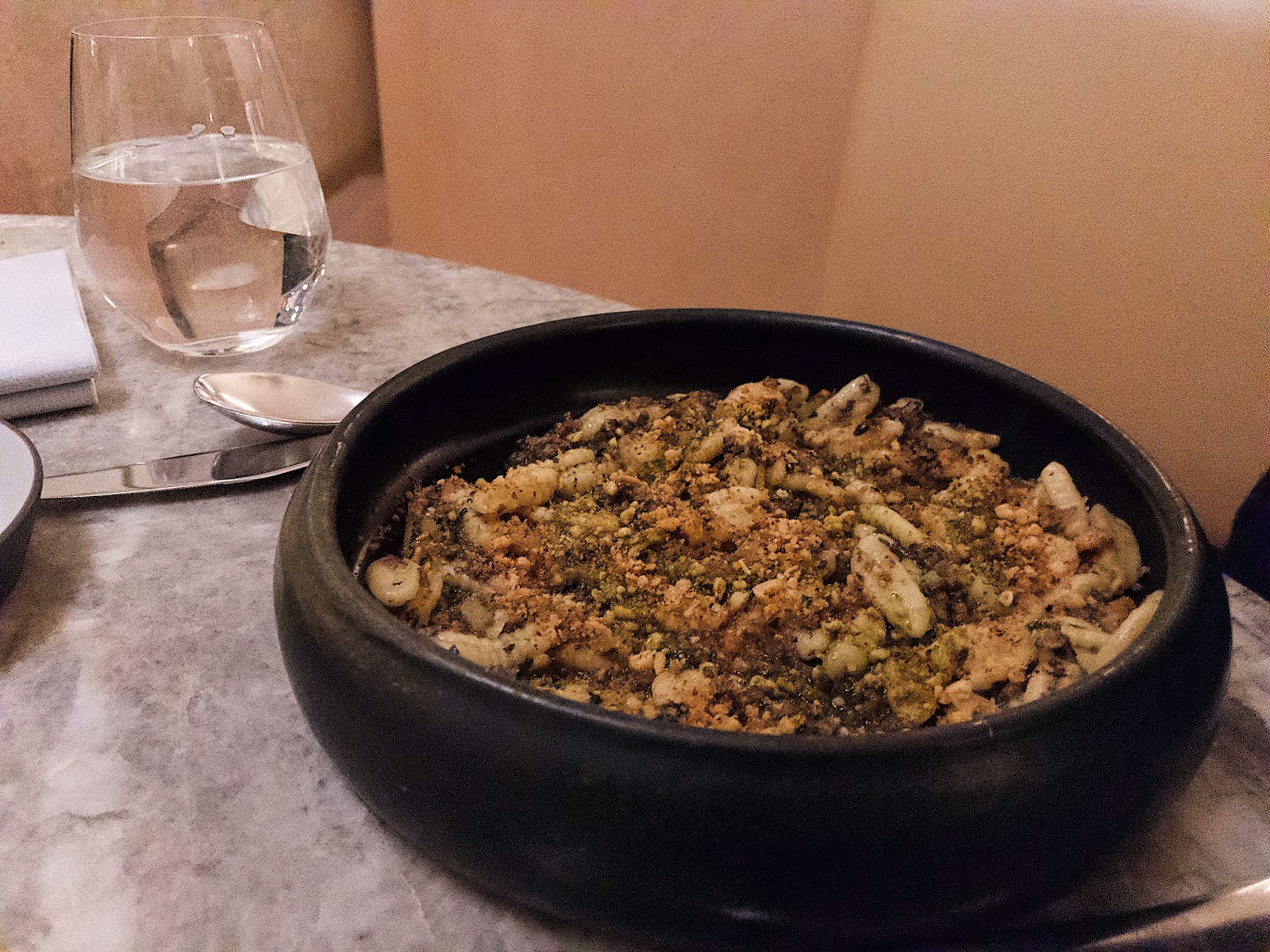 Julie's cavatelli came in a substantial, deep bowl. The whole thing was layered with nuts, which she loved, of course. She seemed to like it because she polished it off before I even had a chance to finish my appy! 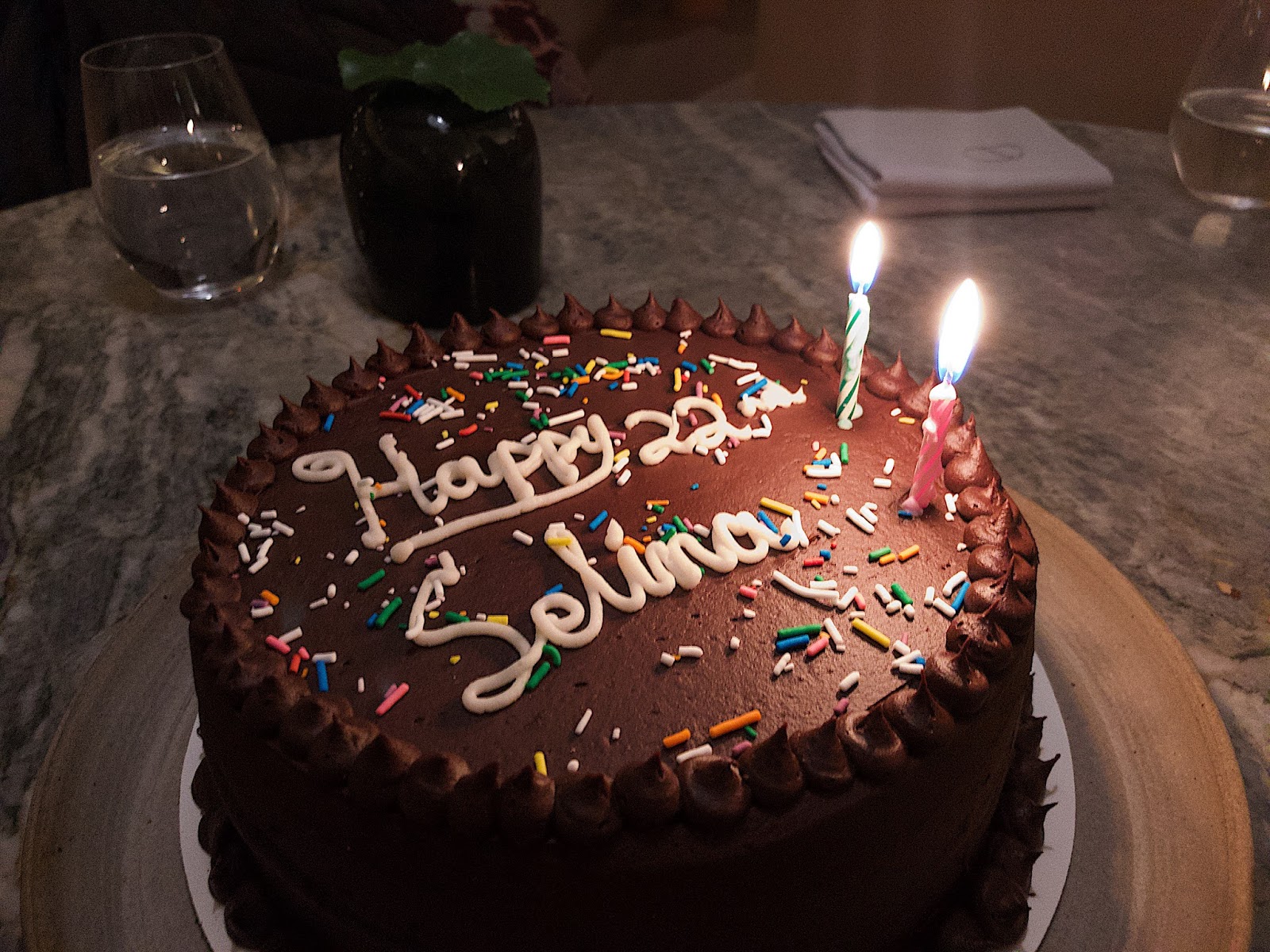 My "birthday-cake" flavoured birthday cake from The Gluten-Free Epicurian!!
4/5 stars

Jeremy decided against doing the predictable and didn't order a donut-cake for me from Cartems this year (like he did last year.) Cartems makes surprisingly affordable cakes...the one he got me last year only cost (get this,) $20!! Yep, $20. How much did this one from the Gluten-Free Epicurian cost, you ask? $55. Quite a stretch, no?

It was much appreciated though, this was only my second birthday cake ever (out of a lifetime of birthdays!) The reason being that as someone who's allergic to dairy, growing up, I never got a cake for my birthday (dairy-free/veganism wasn't as mainstream back then.) But now that we have the option, us allergy-prone individuals can have our cake and eat it too!

The cake was wonderful in the cutest, kitschiest way. It was birthday cake flavoured, hence the rainbow sprinkles. Very egg-y tasting. I'm suspecting the cake wasn't vegan but rather dairy-free, because I could definitely taste some egg in there!